When 43-year-old Ronald Mullins arrived at the Georgetown Toyota plant on a Friday in late 2021, he felt a little off. But he never thought he could be in the early stages of a stroke—or that it would end up saving his life.

Early into his workday, Ronald’s vision went blurry. He felt dizzy. He collapsed and couldn’t talk. Recognizing the signs of a stroke, his coworkers immediately called for help. 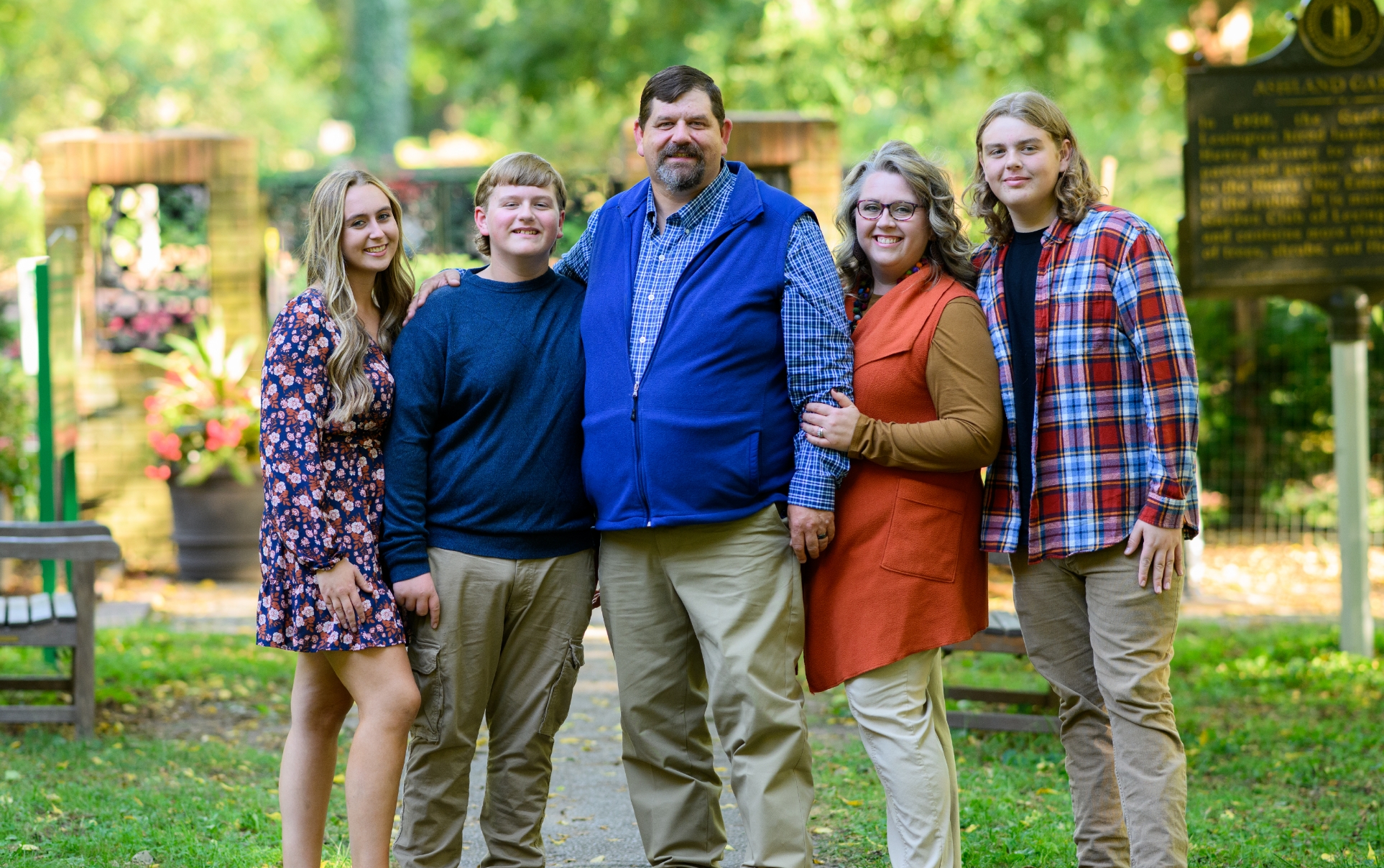 “When you have problems, they can be turned into blessings,” said Ronald.

“We are so blessed that the stroke happened while he was at work,” said Jessica, Ronald’s wife. “There are paramedics on-site at Toyota, which gave him access to immediate medical help. He was quickly transferred to Georgetown Hospital, where he received the clot-busting drug TPA.” 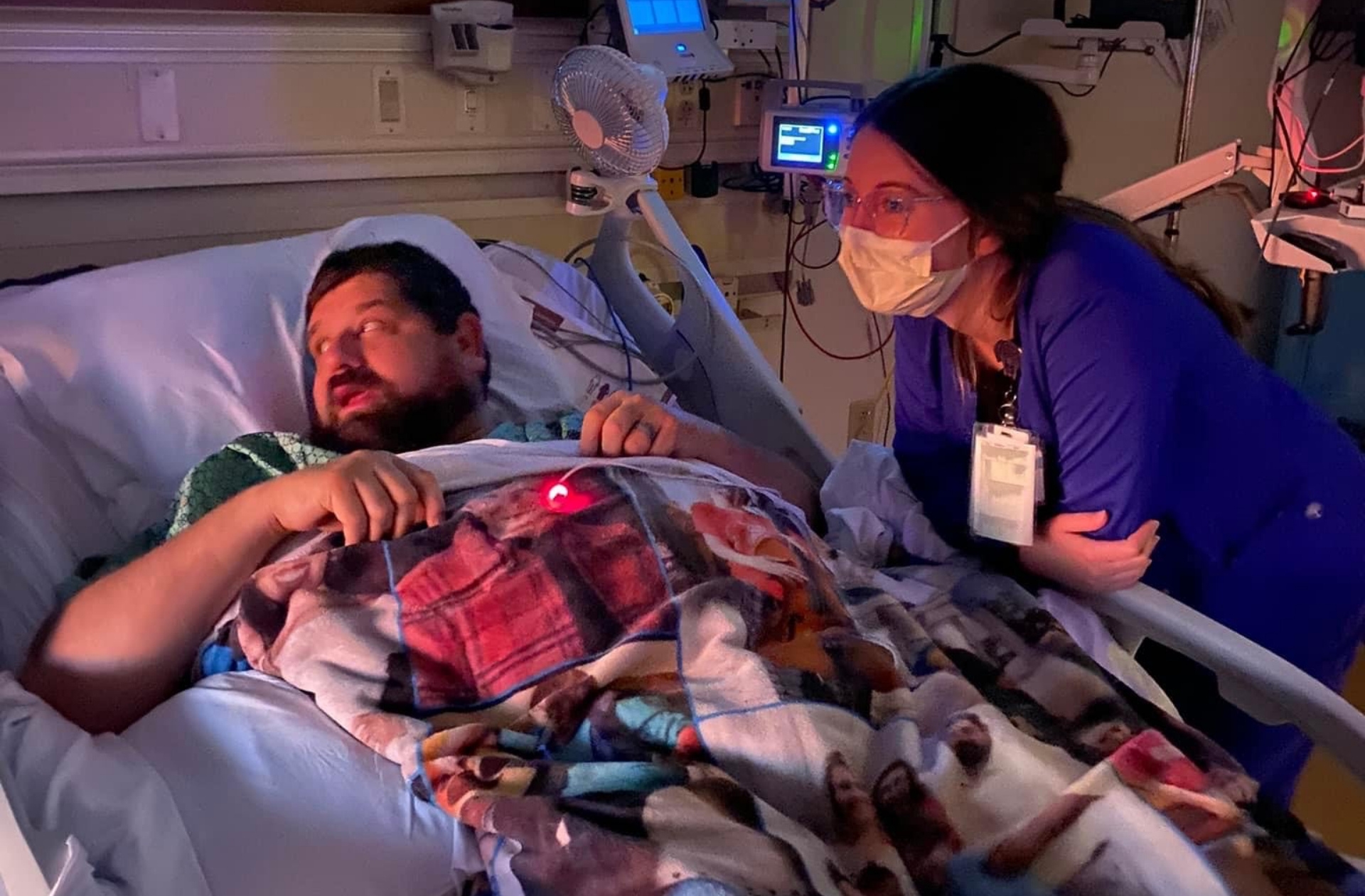 “We really bonded with our people in trauma ICU,” said Jessica. “They’ve become part of our family.”

But Ronald’s clot was too big to dissolve with medication. An ambulance rushed him to the Comprehensive Stroke Center at UK HealthCare’s Kentucky Neuroscience Institute—one of only four locations in Kentucky to achieve that status. 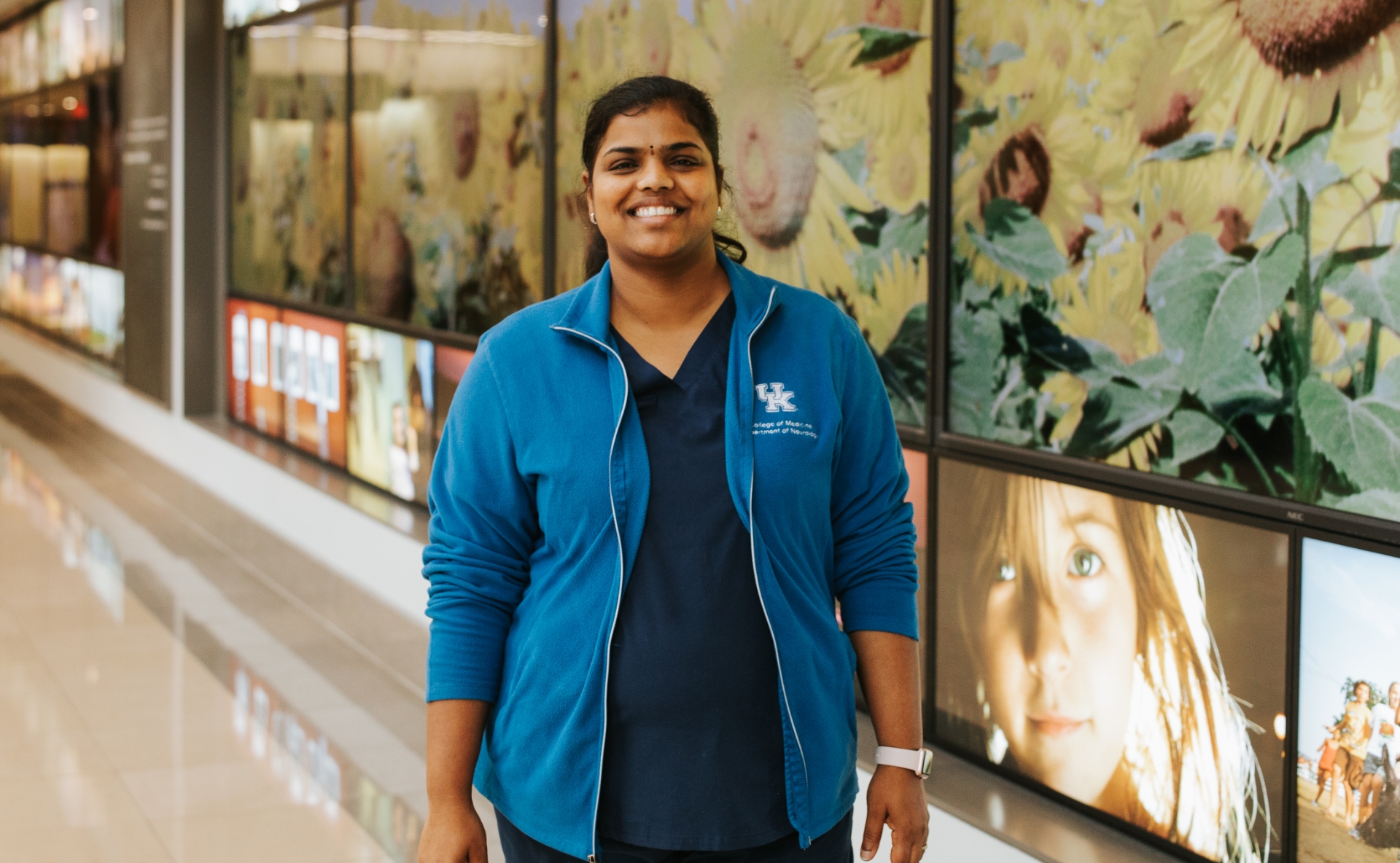 “When I first saw him, his words weren’t making any sense,” said Dr. Rani Vasireddy, a second-year neurology resident on the stroke alert team. “He was just talking and talking, and he didn’t know that his sentences weren’t meaningful. When patients with sensory aphasia talk, they think we can understand them, but we can’t—so Ronald was speaking his mind, but it comes as non-meaningful sentences for the rest of us.” 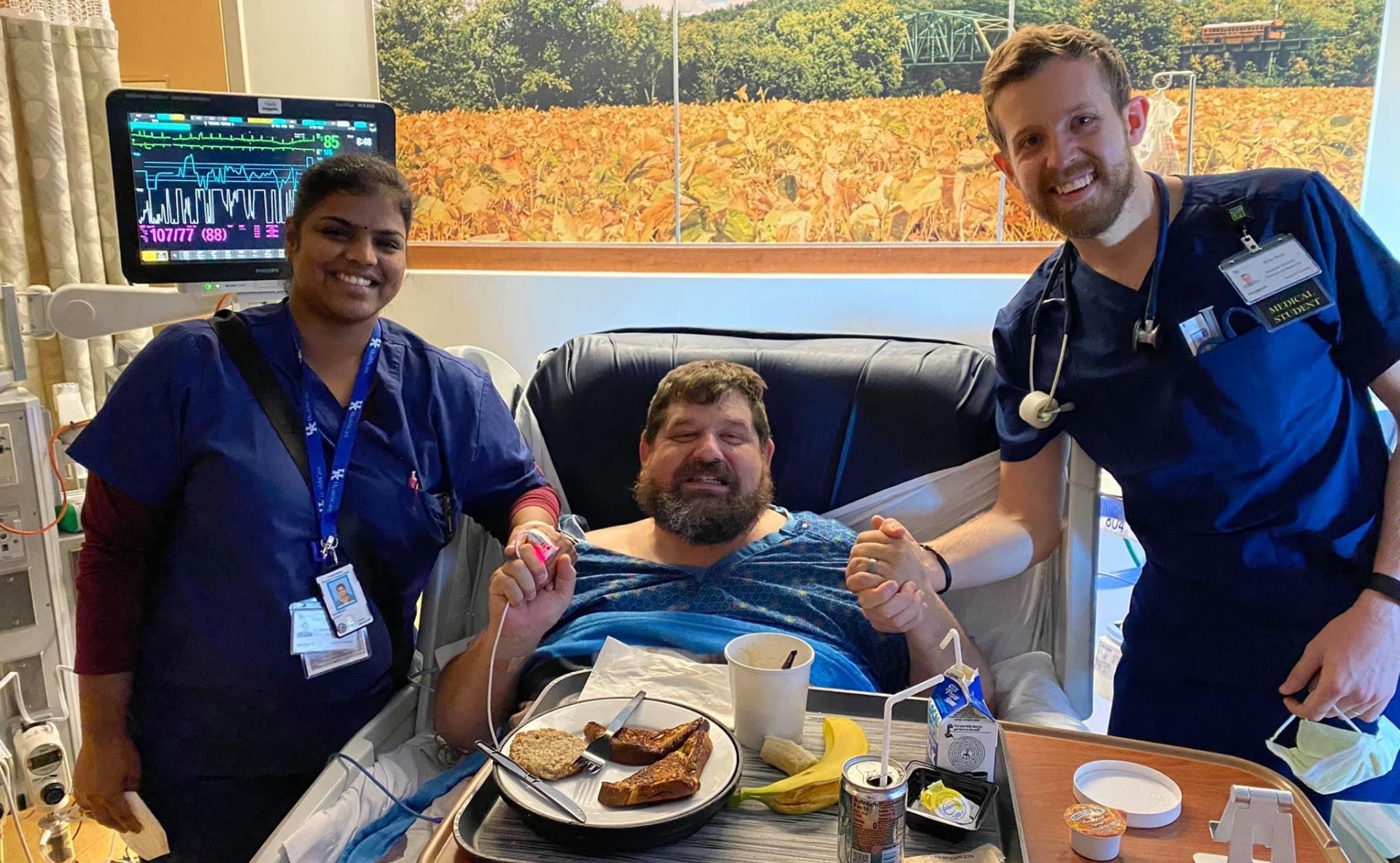 “Many people help me,” said Ronald. “Dr. Rani has been so compassionate [to] me.”

After a surgery to remove the clot and restore blood flow to his brain, Ronald’s medical team determined the root cause of his stroke. Ronald had atrial fibrillation: a serious heart condition where the upper chambers of the heart beat chaotically and out of sync with the lower chambers. A-fib, as it’s commonly known, can be asymptomatic—but makes it more likely for the patient to experience a clot. In Ronald’s case, his A-fib caused a clot to break off, leave the heart and travel to the brain to cause his stroke. 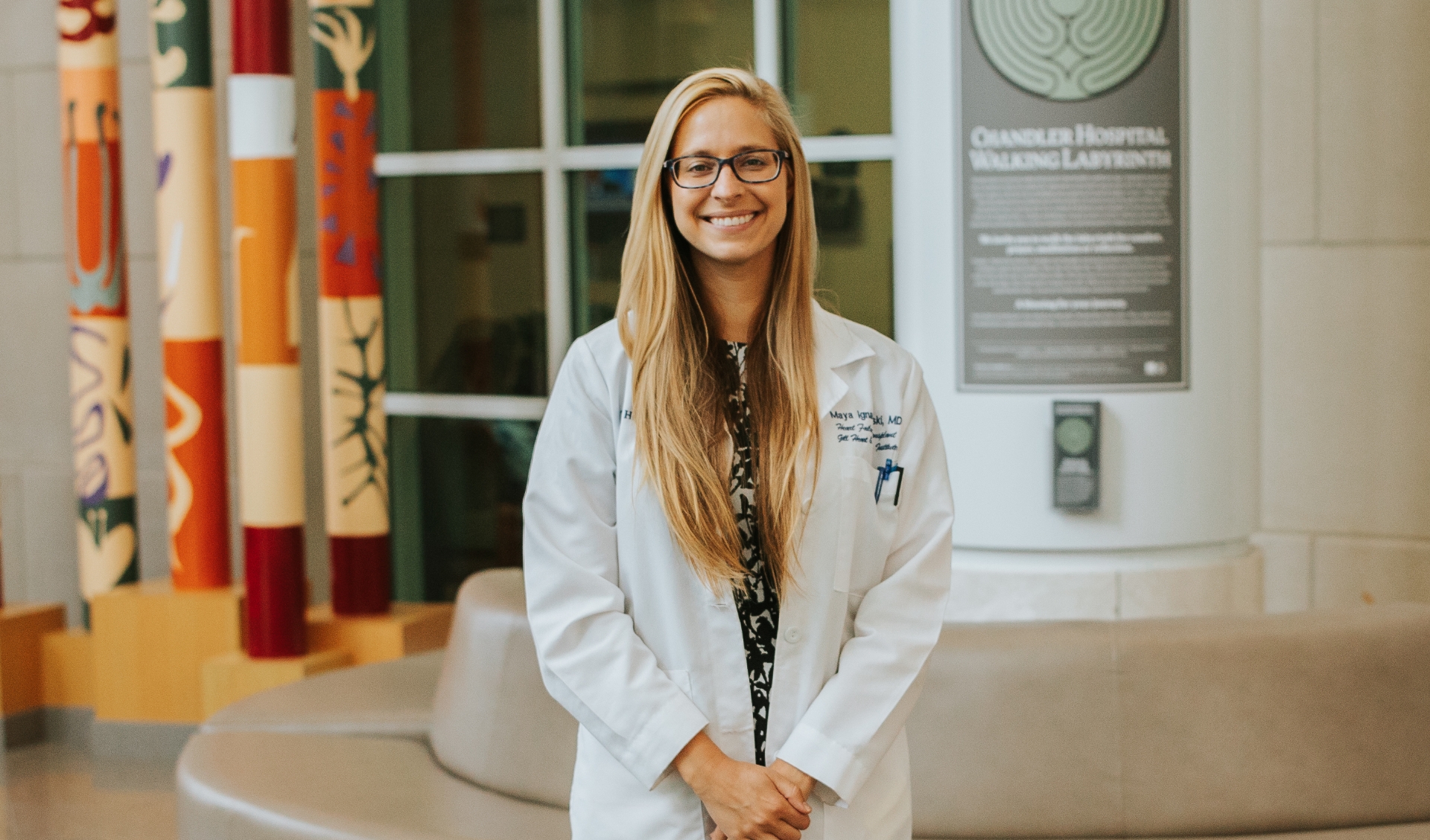 “You always want to do right by the person,” said Dr. Ignaszewski. “It’s so rewarding helping them get better.”

“Ronald’s stroke may have, in effect, saved his life,” said Dr. Maya Ignaszewski (known as Dr. I to her patients), the physician in charge of Ronald’s cardiac care at UK HealthCare’s Gill Heart & Vascular Institute. “If it hadn’t happened, he wouldn’t have known he has atrial fibrillation or cardiomyopathy—which is a disease of the heart muscle that causes it to become weak and makes it more difficult to pump blood to the rest of the body. All of this was uncovered because of the stroke.” 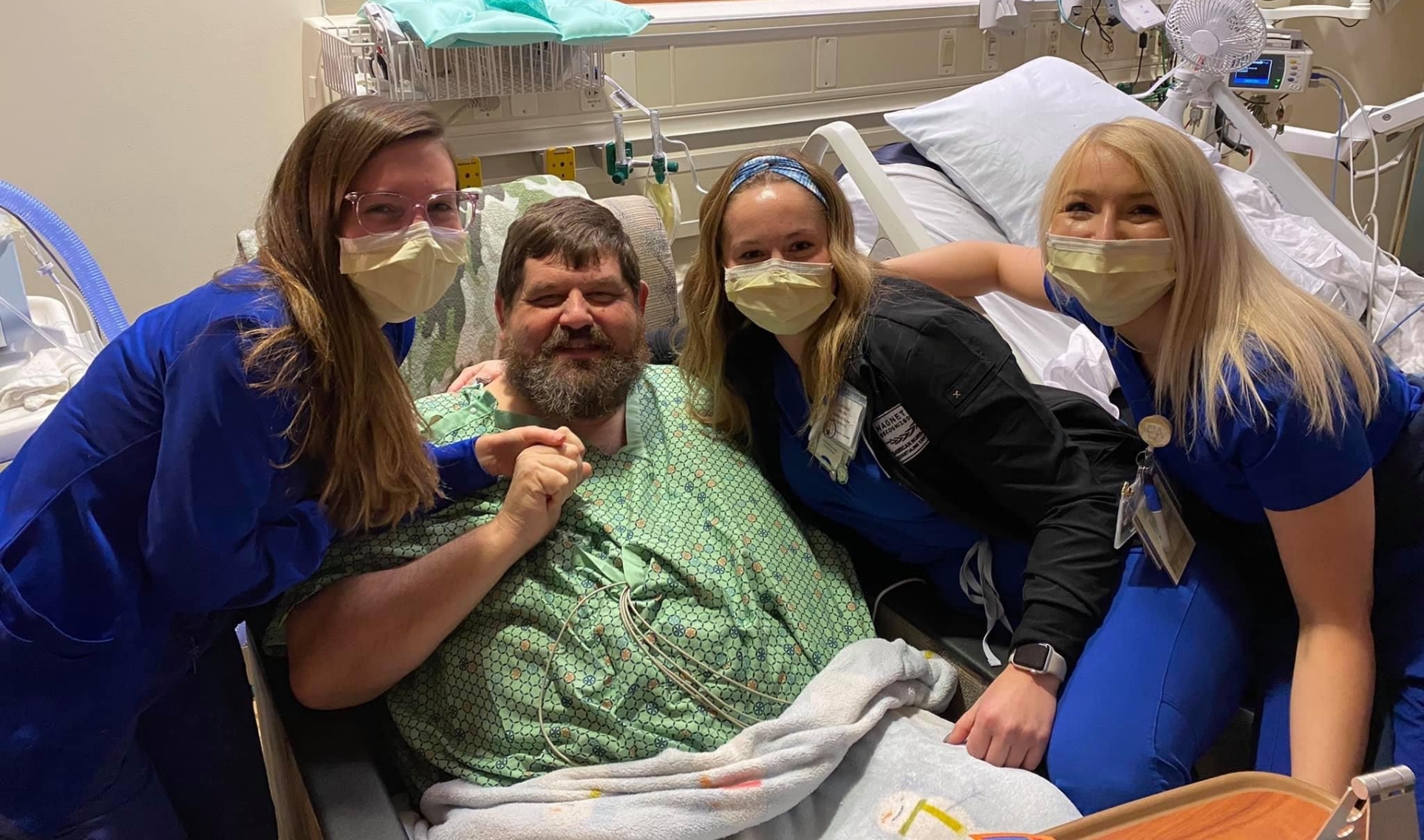 “Our entire experience at UK HealthCare aligned us with [people] we will never, ever forget,” said Jessica.

Two related conditions meant two related recoveries. Through a combination of physical rehabilitation, speech therapy, and medication, Ronald and his team are working hard to strengthen his heart and help rebuild the functions affected by his stroke. It’s an effort that takes a team, including physicians and therapists across multiple specialties, as well as nurses like Stacy Ford. 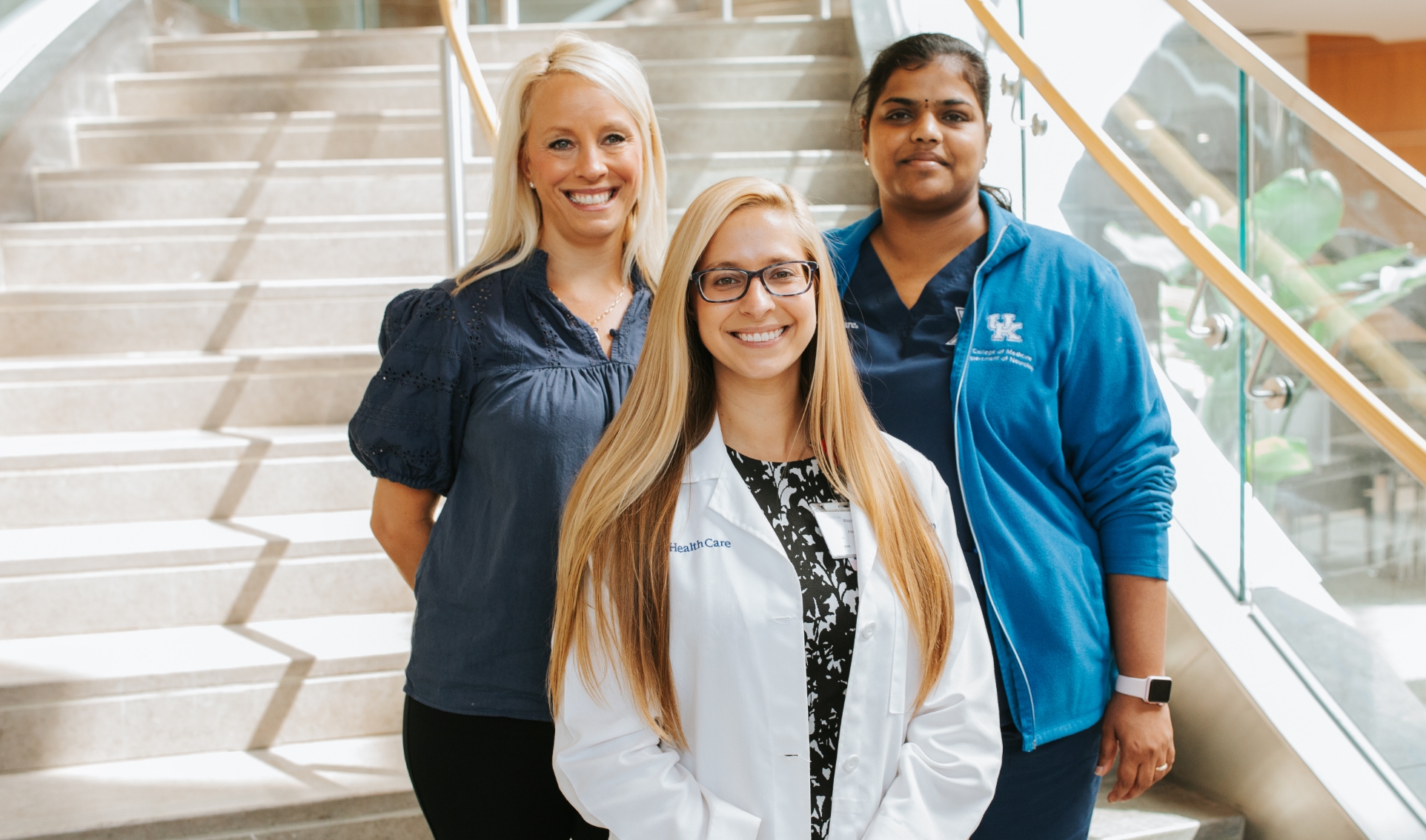 “Everyone works really well together to help [our patients] get the very best care,” said Dr. Ignaszewski.

“Stacy is the one who, probably much more than me, interacts and speaks with the Mullinses behind the scenes,” said Dr. Ignaszewski. “So she’s a big liaison and a go-between between them, myself and other care providers, so she’s been instrumental also in helping their journey and helping them move forward.” 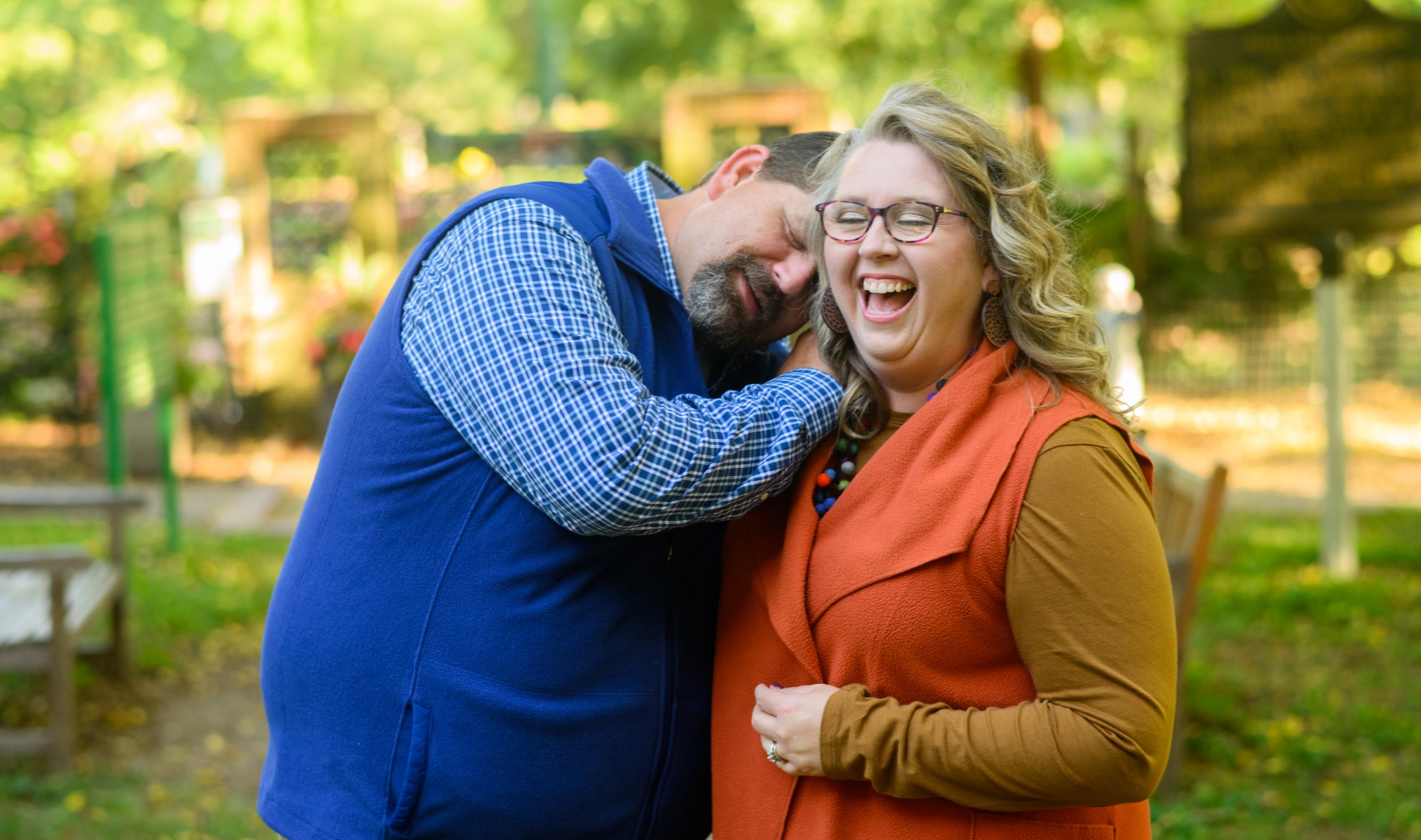 “I hope people understand that when something like this happens, the people around them know that they need them. I need her every day,” said Ronald about Jessica, who has been by his side nonstop. Jessica’s background as an elementary school principal has been invaluable as she and Ronald have worked to rebuild his speech—one of the areas most affected by his stroke. 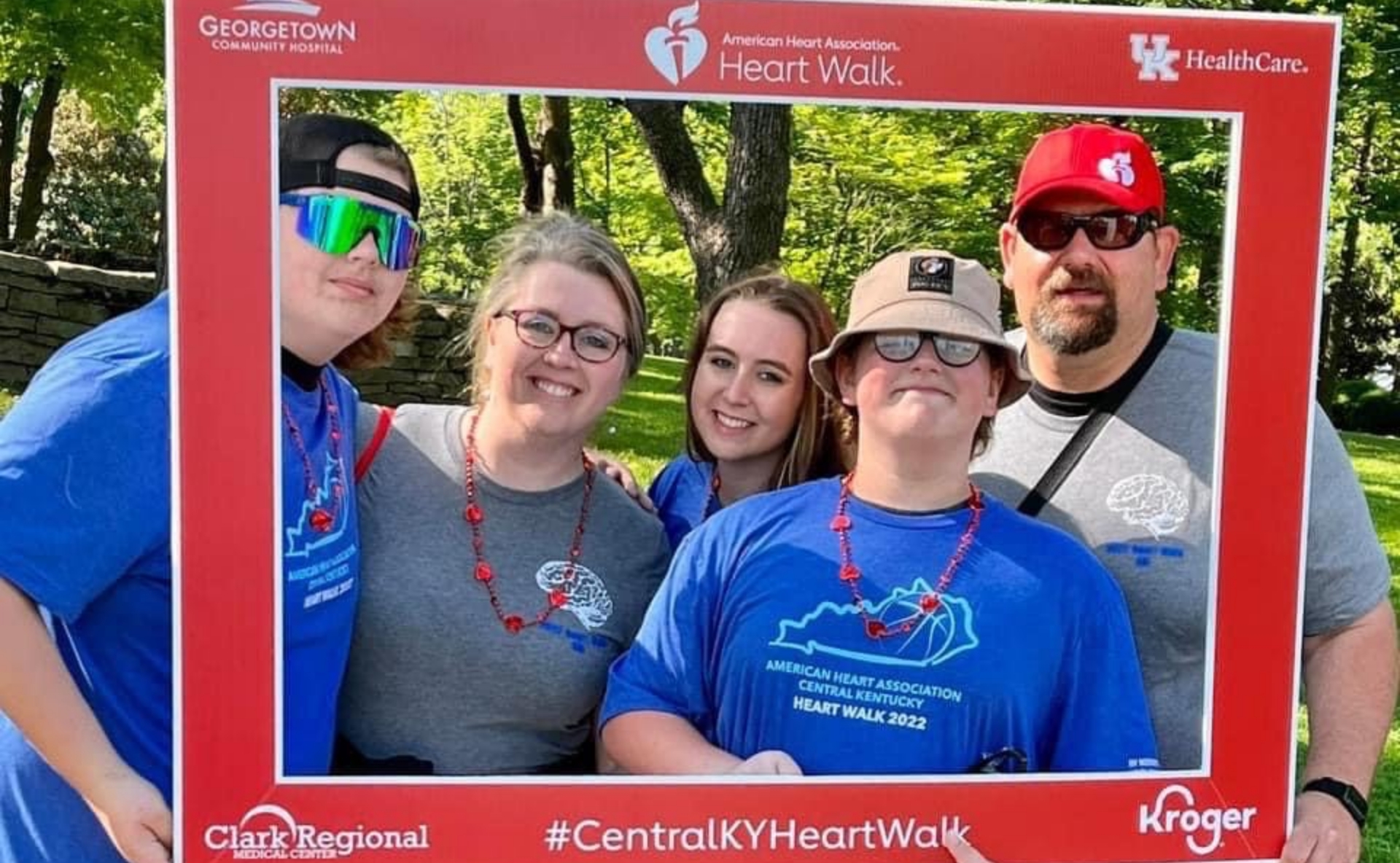 “[Our] children are great teachers themselves,” said Ronald. “They’ve all had a hand in that.”

“We call Ronald the teddy bear of our patient group, but his resolve, strength and motivation to do everything he can to get better is so impressive,” said Dr. Ignaszewski. “He and Jessica always have smiles on their faces and always ask, ‘What else can we be doing?’ They’re phenomenal, remarkable people.” 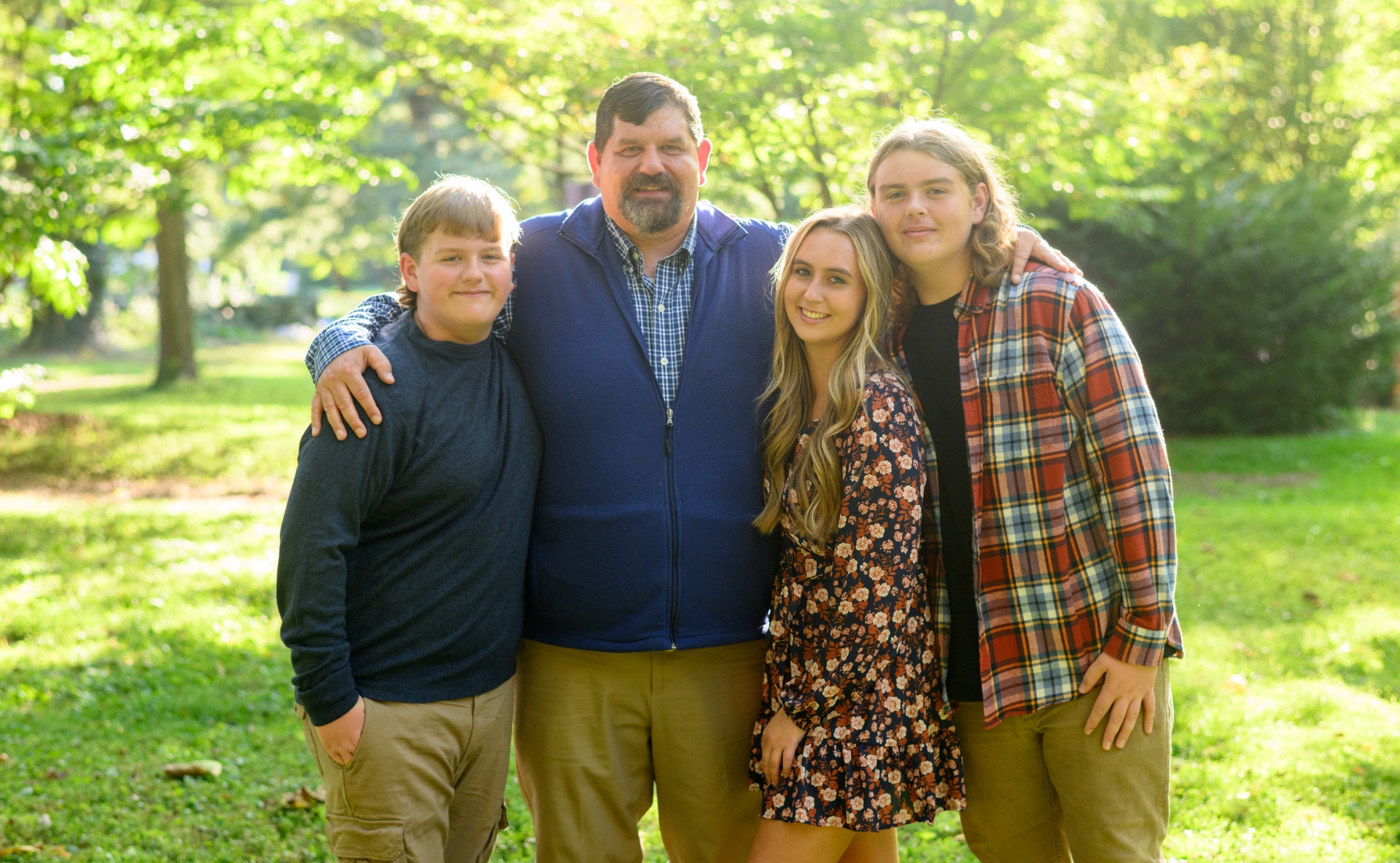 “I took so [much for] granted before all this began,” said Ronald. “It has completely changed my life.”

“We have hard days, yes, but it’s a conscious effort to be humble and appreciative,” said Jessica. “We’re going to love people and learn and grow. That’s our goal: one word at a time, one day at a time.” 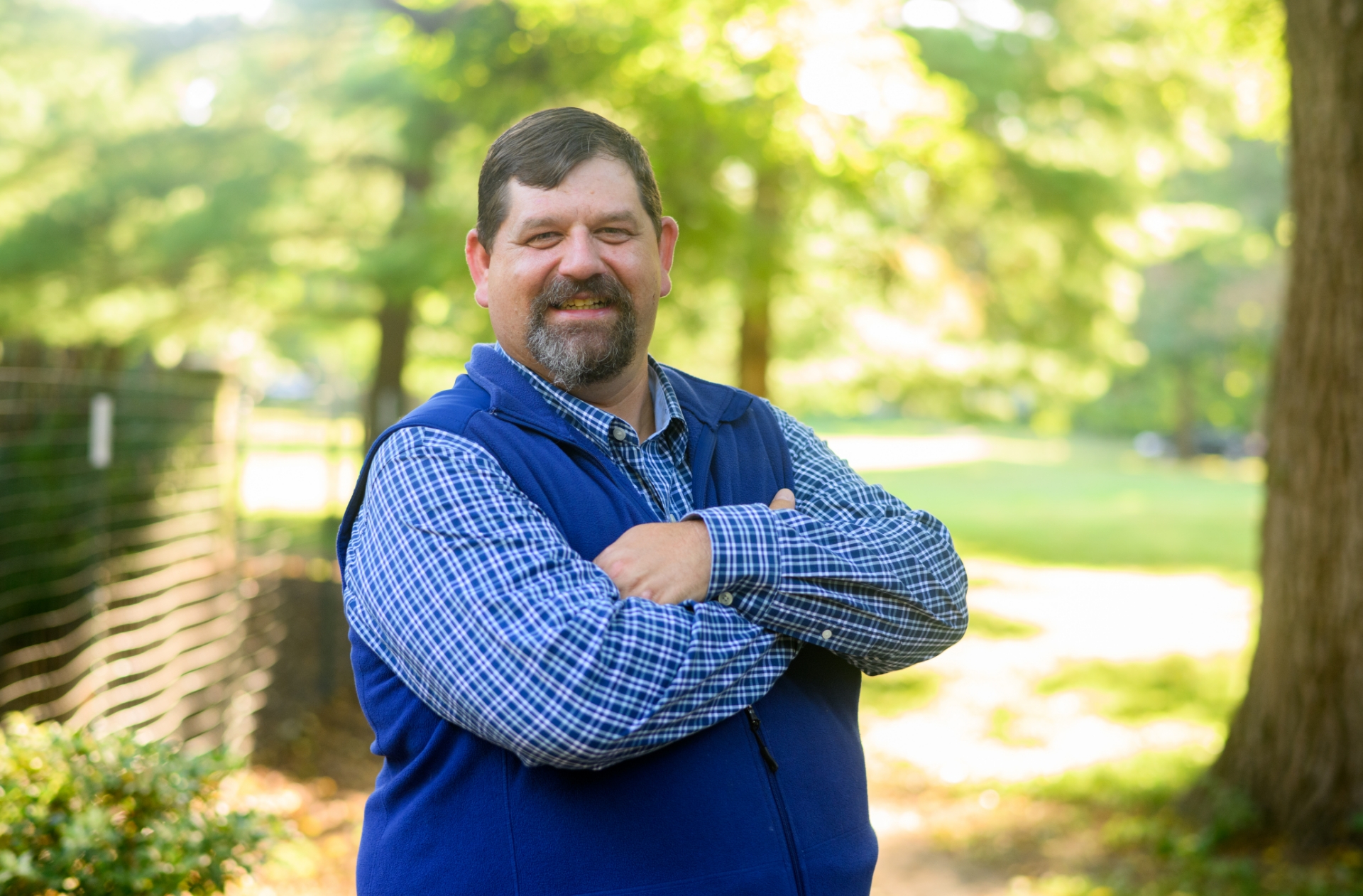 “Instead of being sad, [I’m] happy and excited for new opportunities,” said Ronald.