It wasn’t an easy call.

Randall Cobb, Kentucky’s superstar freshman, had injured his knee during the last game of the season. There were two paths forward: remove Randall’s torn meniscus and get him back on the field in time for a bowl game…or repair it, and take him out of the game for months. 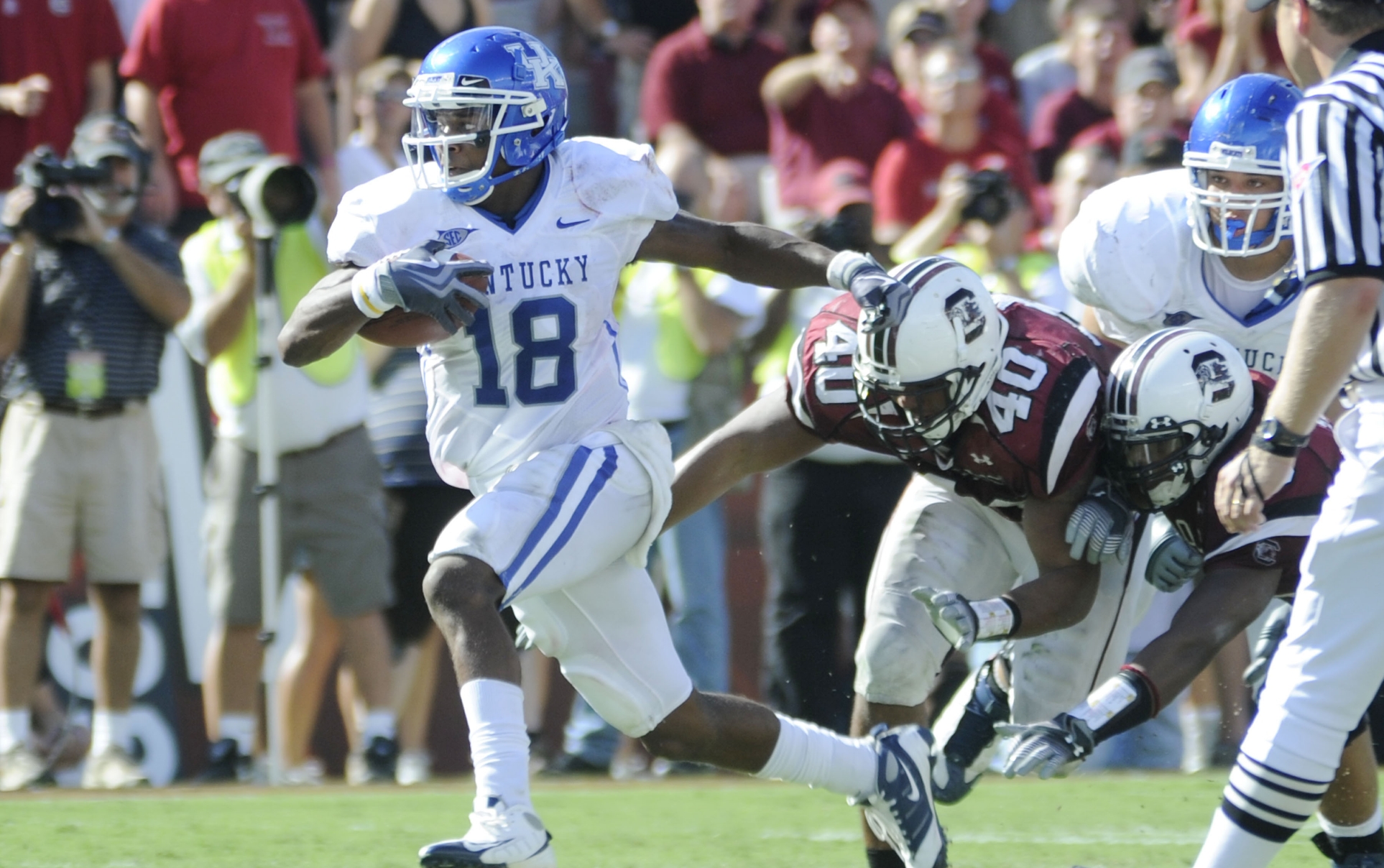 “I played through a lot of injuries over my career, but I made this [one] worse by playing through it,” said Randall.
Photo provided by the University of Kentucky.

“We didn’t know the extent of the injury, but we later found out because I don’t think he wanted us to know how bad he was hurting, initially,” said Coach Rich Brooks. “We knew that he had to have that fixed, and we wanted to make sure it was fixed right.” 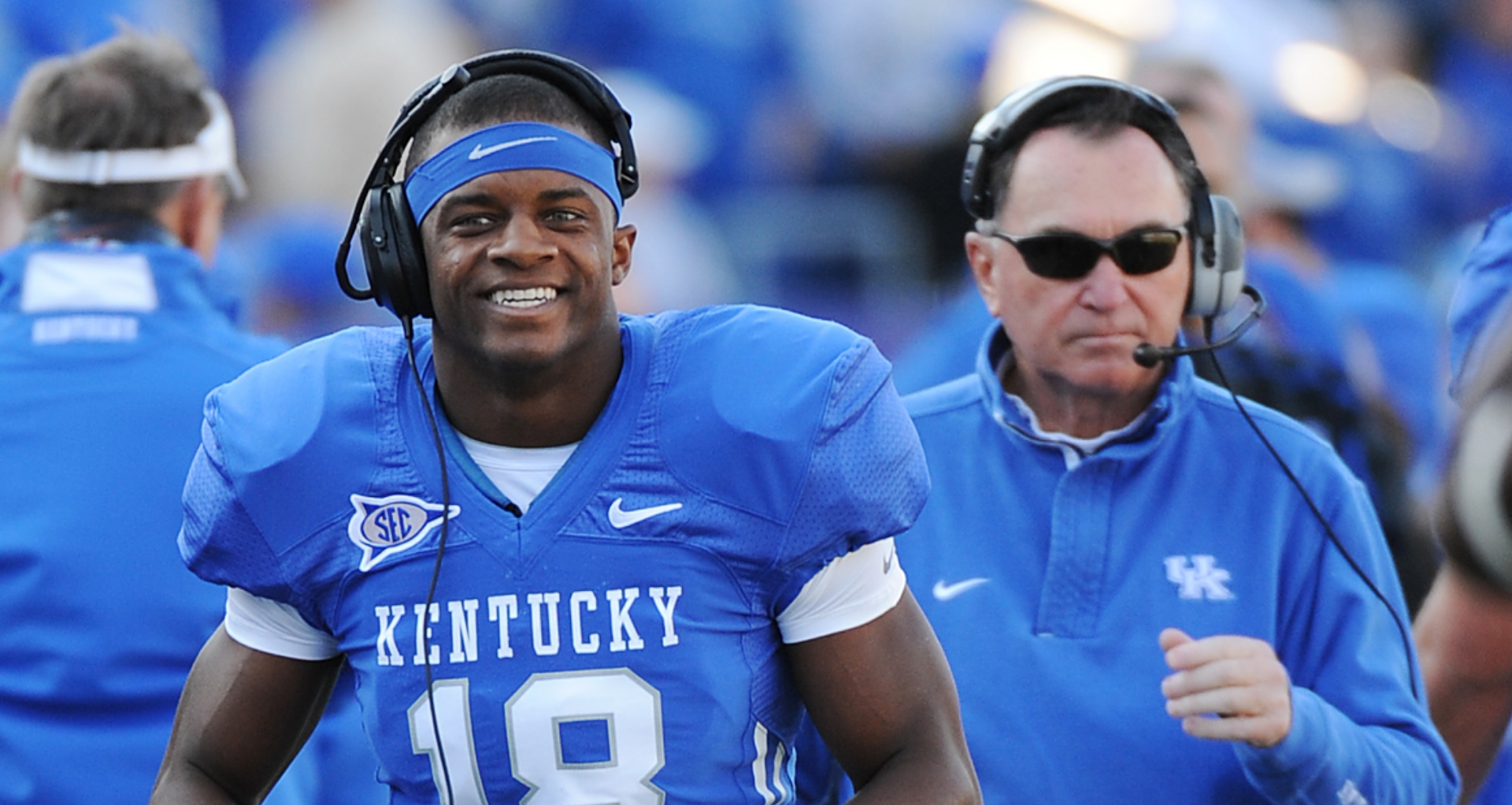 “Didn’t really think anything of it,” said Randall. “Just thought it’s some pain.”

Compounding the decision was the nature of Randall’s injury: a complex tear of his lateral meniscus, the shock absorber of the knee. At the time, there were few other examples of successful repairs of injuries like his. Most surgeons would have taken it out completely—a more straightforward procedure, but one that would have repercussions for his career.

“The NFL is a big business,” said Dr. Darren Johnson, Randall’s surgeon and Director and Chief of Sports Medicine at UK HealthCare Orthopaedic Surgery & Sports Medicine. “They have data that says, ‘You take out a kid’s lateral meniscus, he doesn’t last 14 years.’ ” 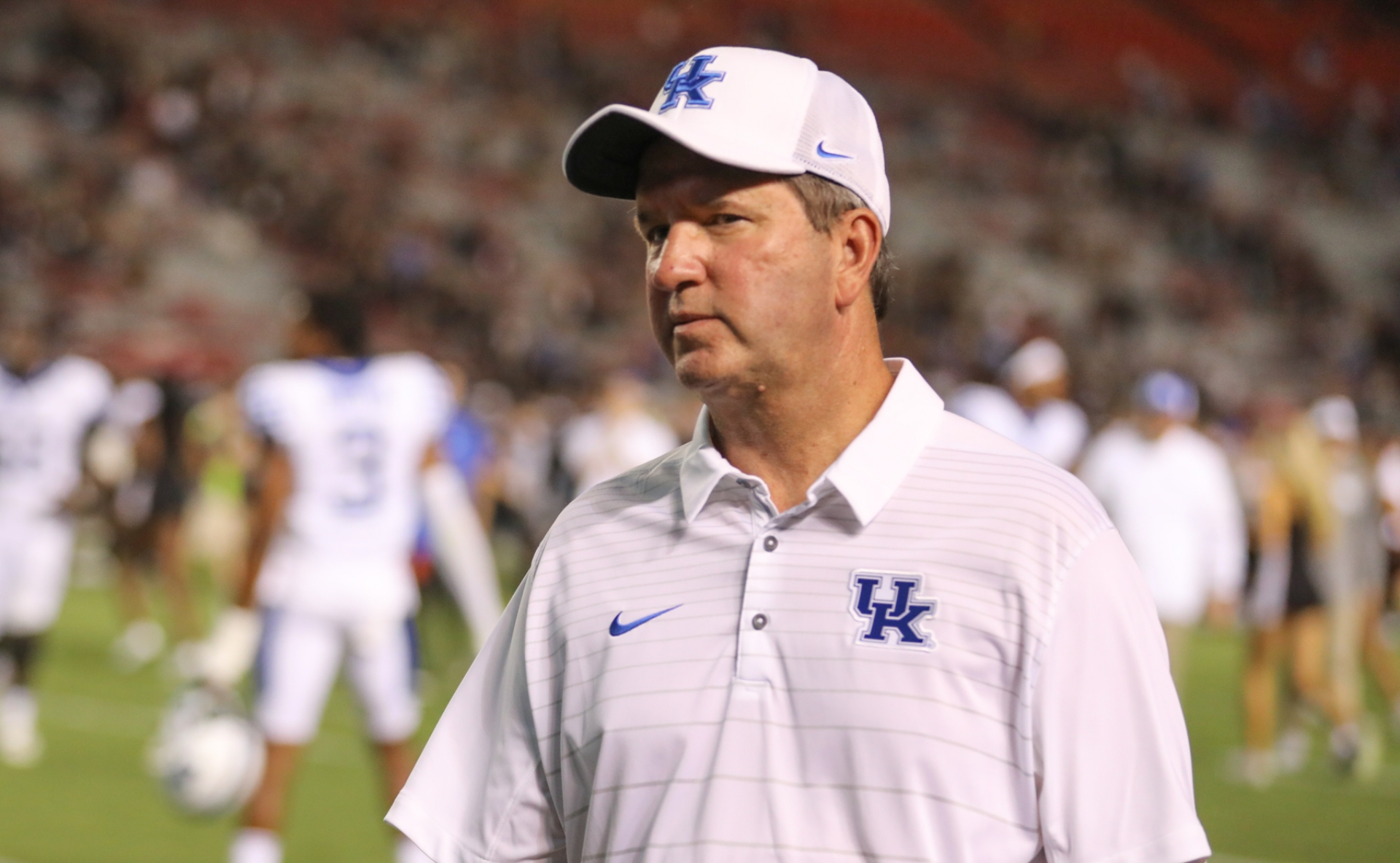 “You have to be very careful and make sure you’re taking the right course of action for the player’s long-term benefit,” said Coach Brooks.

Randall’s talent was undeniable. He clearly had a future in football, at Kentucky and beyond. With that in mind, his team decided to take a chance on the more complex repair—taking him out for the season, but potentially saving his career. 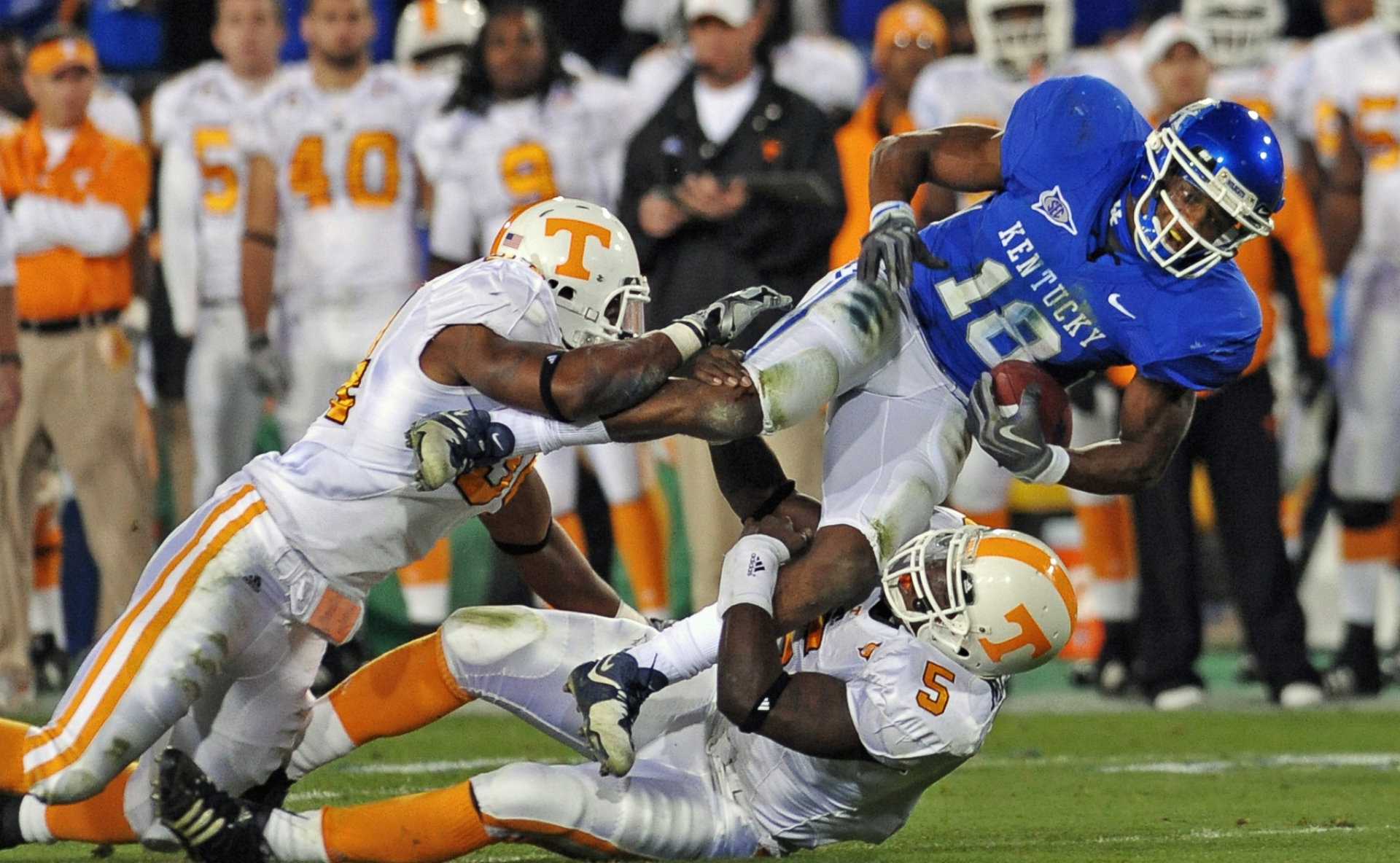 “Whenever you’re going through an injury, you’re not going to heal overnight,” said Randall.

“I had heard meniscus surgeries are usually pretty quick,” said Randall. “You recover in two to three weeks, no big deal. So, I didn’t really think too much of it. And then Dr. Johnson told me that I needed to repair my meniscus, because I had torn it almost all the way through … and it was going to be a two to three month recovery.” 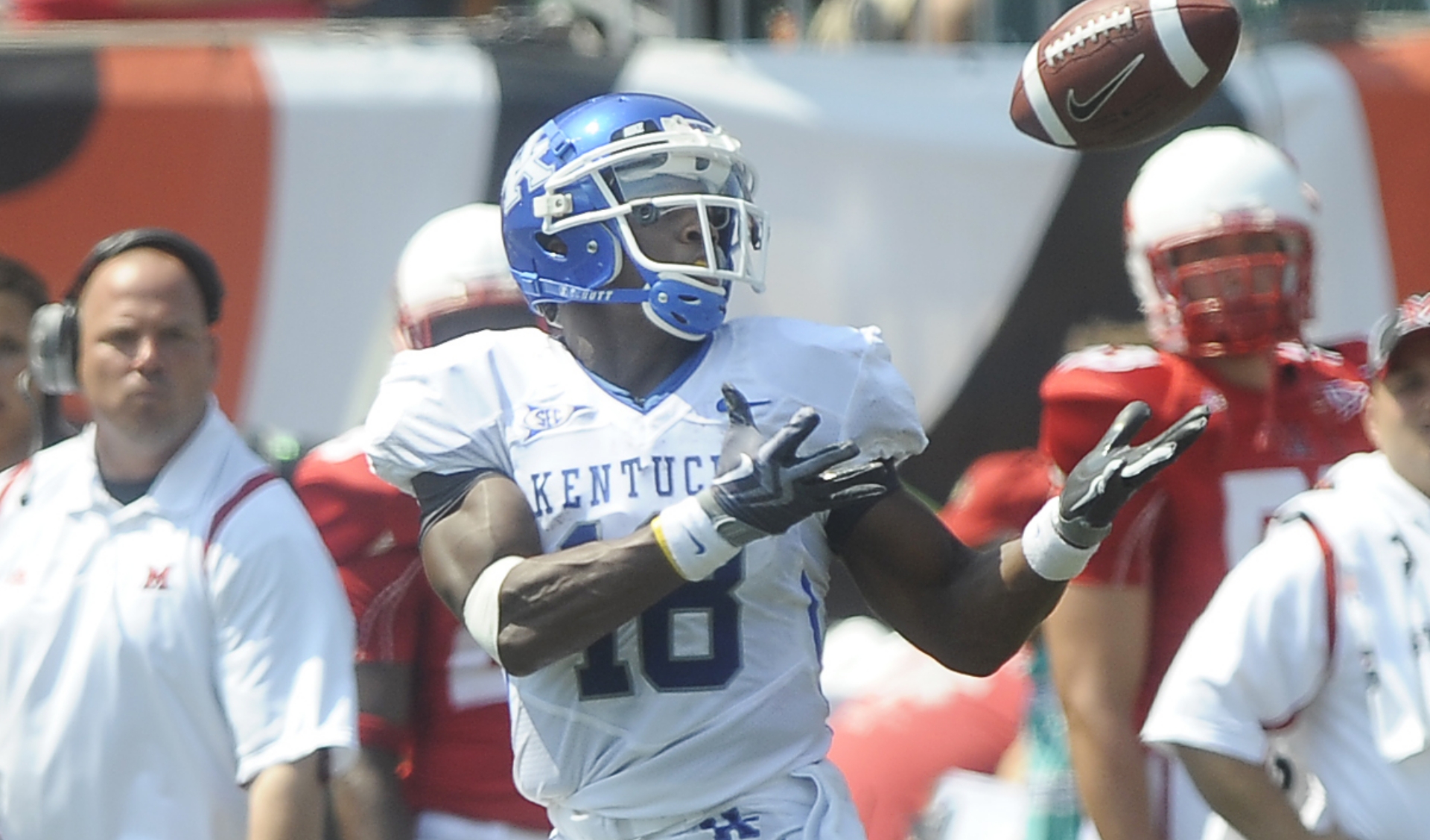 “He was a unique kid,” said Dr. Johnson. “He was a professional even as a collegiate athlete.”

“He went from having a great season, looking forward to a bowl game, [being] on top of the world,” said Jim Madaleno, UK’s Director of Sports Medicine and Head Football Athletic Trainer at the time. “And all of a sudden it’s all been pulled out from underneath. We had to tell his parents and him the truth: that we don’t know his future because this is a procedure that isn’t done that often.” 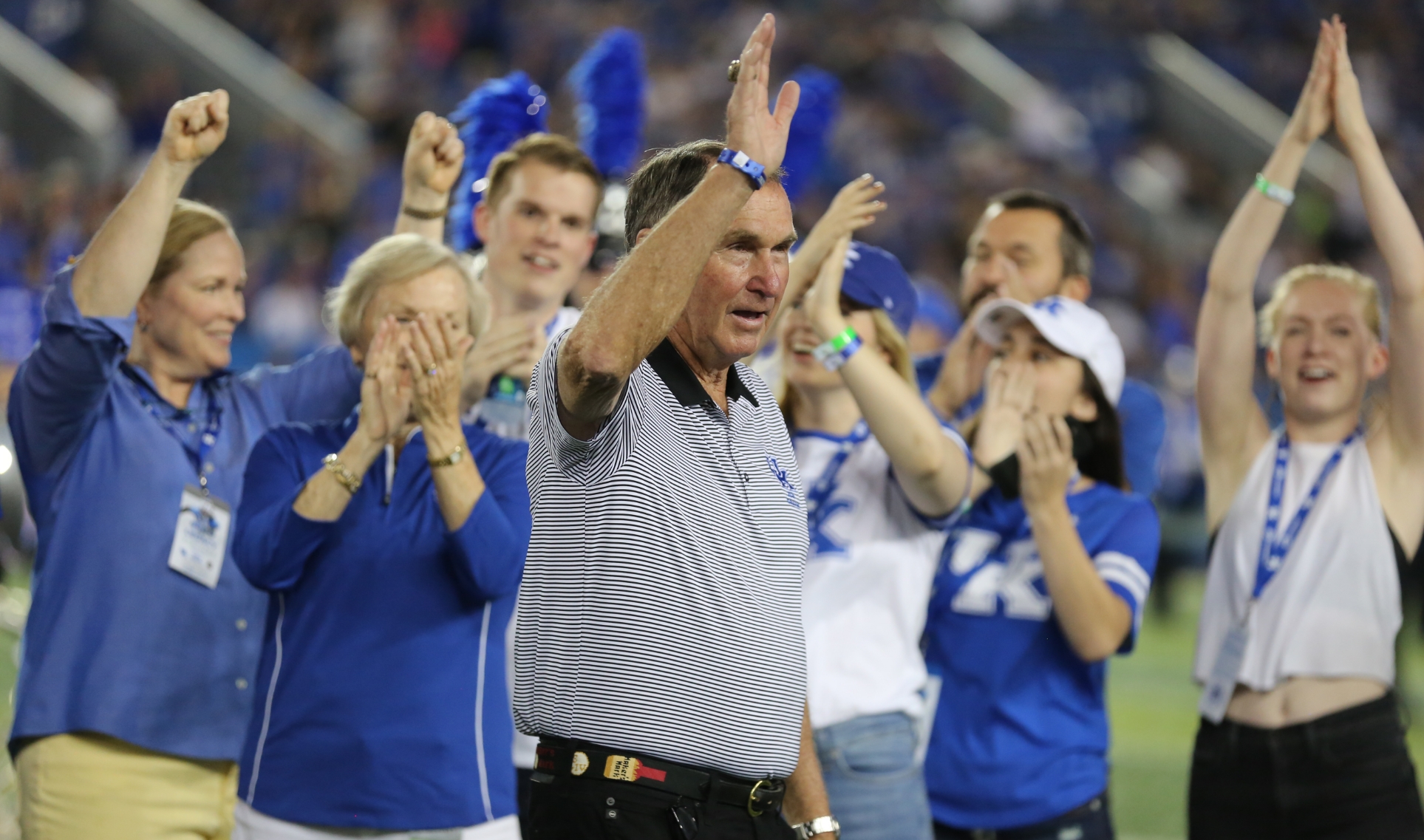 “Randall is one of the best players I had in my Kentucky career,” said Coach Brooks. “We knew we had something special.”

“We pushed the envelope a little bit,” said Dr. Johnson, “It was a very complex tear. And I would imagine a lot of surgeons wouldn’t have done what I did. But sometimes you roll the dice. And I picked the right kid to do it to, because he’s a good rule follower. You’ve got to do the rehab. You’ve got to use crutches for six weeks … But for the longevity of his knee and the longevity of the athlete, it’s a big deal.” 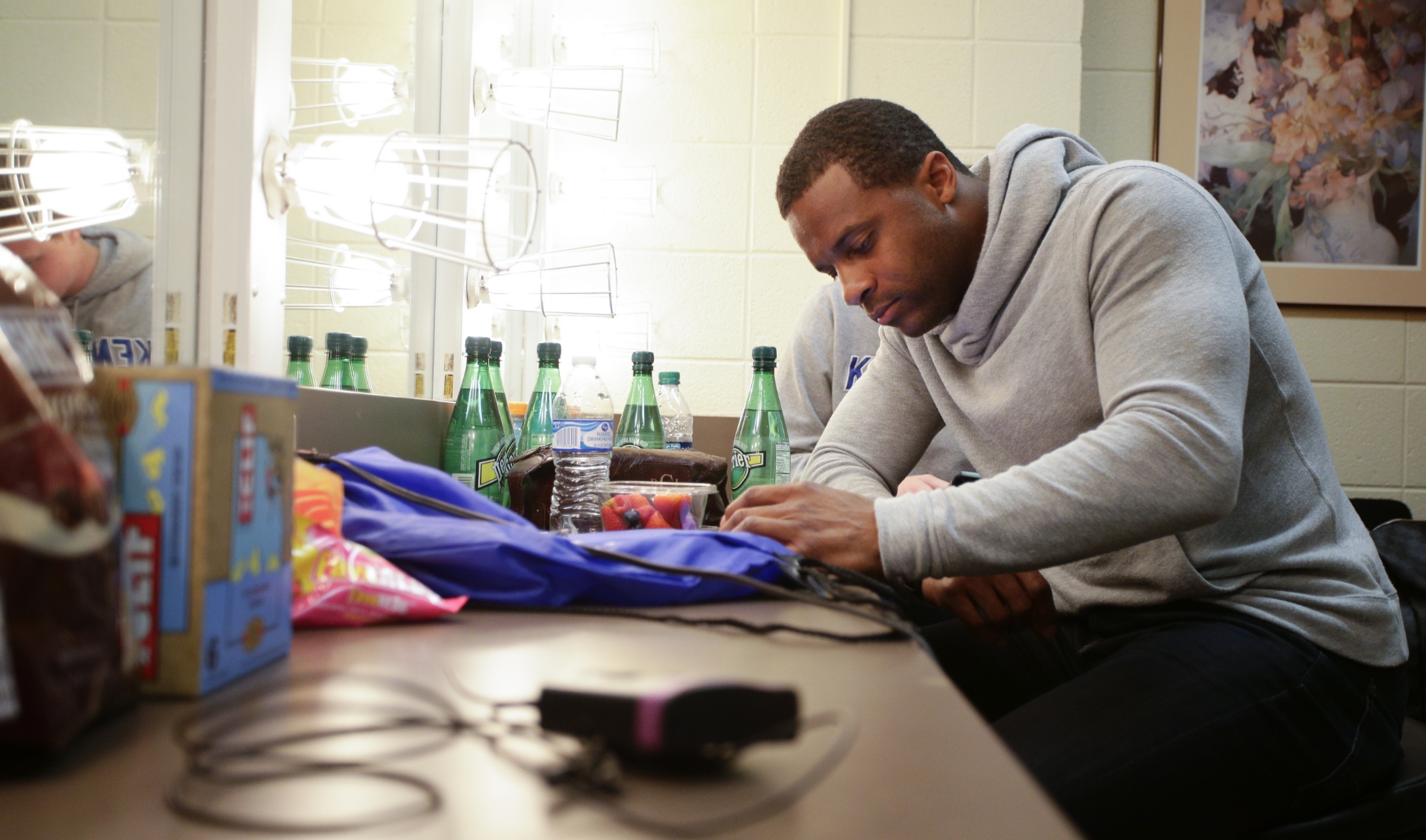 “Stick to the plan, put in the work, then you’ll get the results,” said Randall.
Photo courtesy of Mark Cornelison.

Randall understood what was on the line, and threw himself into his recovery with the same dedication and drive he put into his play. Supported by his teammates, athletic trainers, coaches, doctors, and family, he began the long process of building his strength back up and learning to trust his knee again.

“Whenever you’re questioning if you’re ever going to be the same when you come back from these injuries…it’s a dark place,” said Randall. “If you can overcome the mental fatigue and the dark places and see the positivity and the daily progress that you make, it makes a huge difference in the overall success of your recovery.” 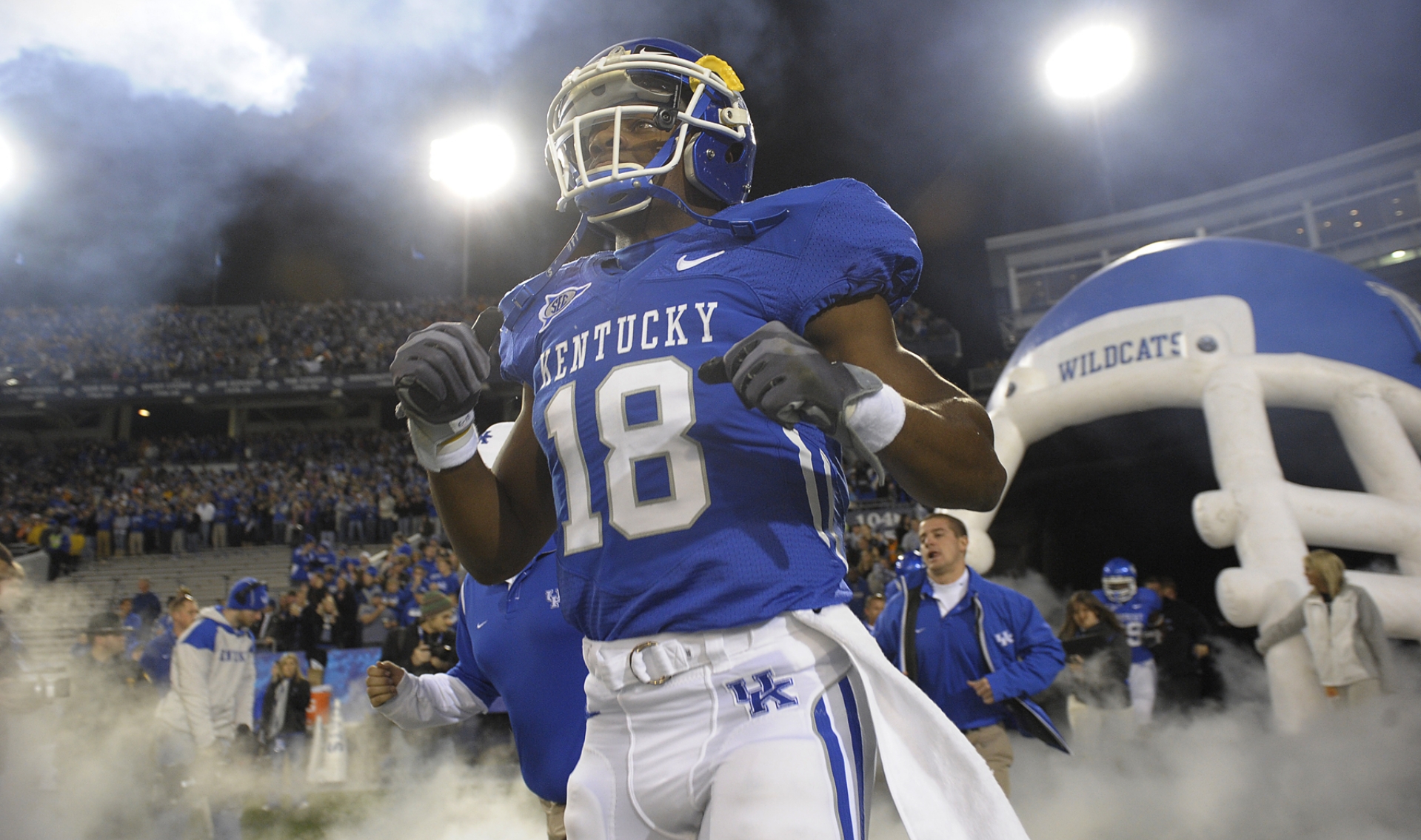 “I really can’t put into words the impact [Dr. Johnson and Jim Madaleno] made in my career,” said Randall.
Photo courtesy of Ken Weaver.

Finally, Randall was ready to get back on the field again—putting his knee to the real test.

“I was cautiously excited, but I wanted the horn to blow at the end of the game to know he made it through the game,” said Jim Madaleno. “And then I was still respectfully cautious because I wanted to see how his knee responded the week after the game. And every day that evolved, you knew, ‘Wow. This thing worked.’” 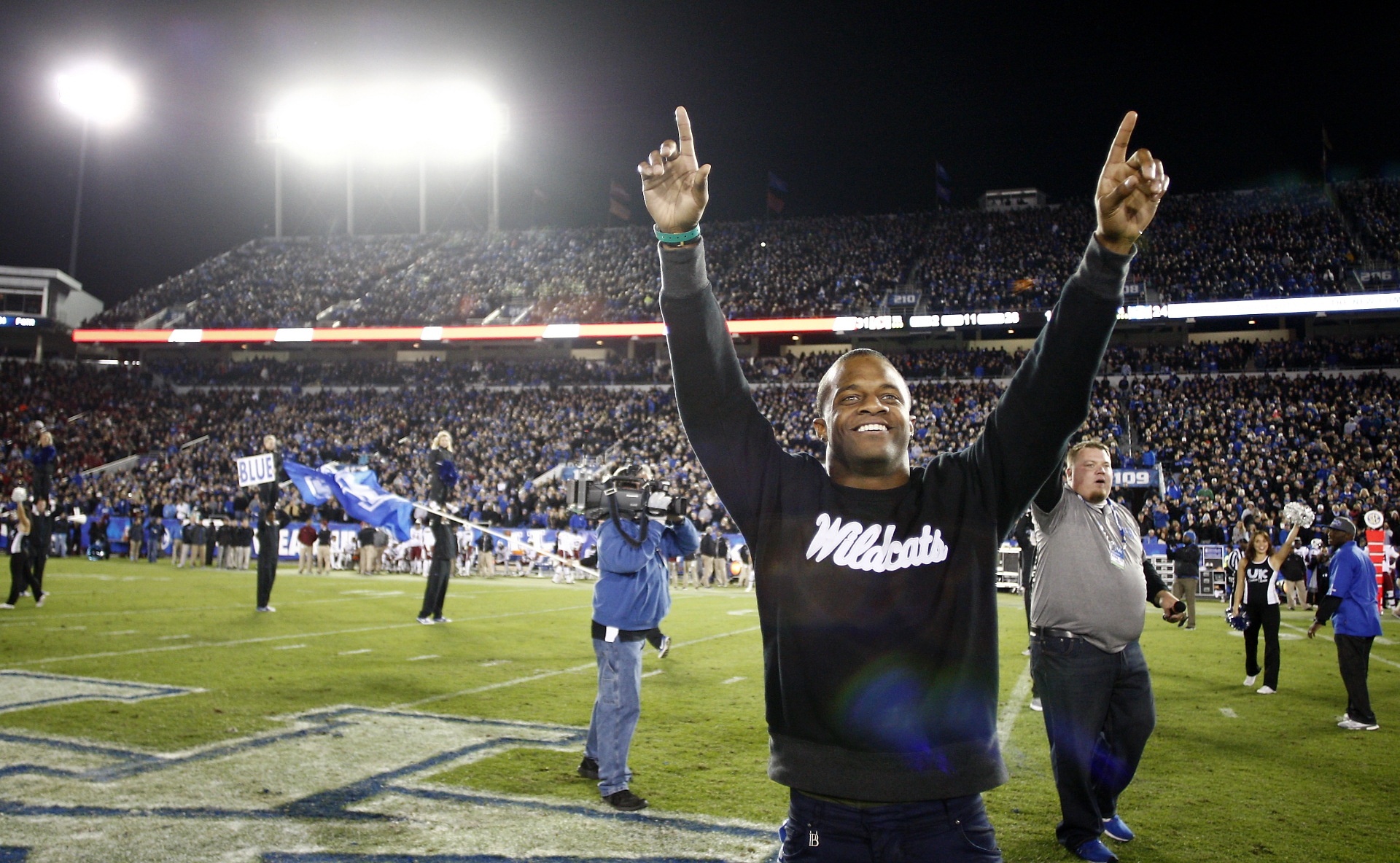 “I’m so thankful to have [been] part of a community that shows love and support for their players,” said Randall.
Photo courtesy of Chet White.

“Had I removed my meniscus, I would’ve had bone on bone,” said Randall. “I would’ve been able to play, but I would’ve been in a lot of pain playing through it. So, with him being able to save most of my meniscus instead of taking out, removing the whole thing, that was a huge difference.” 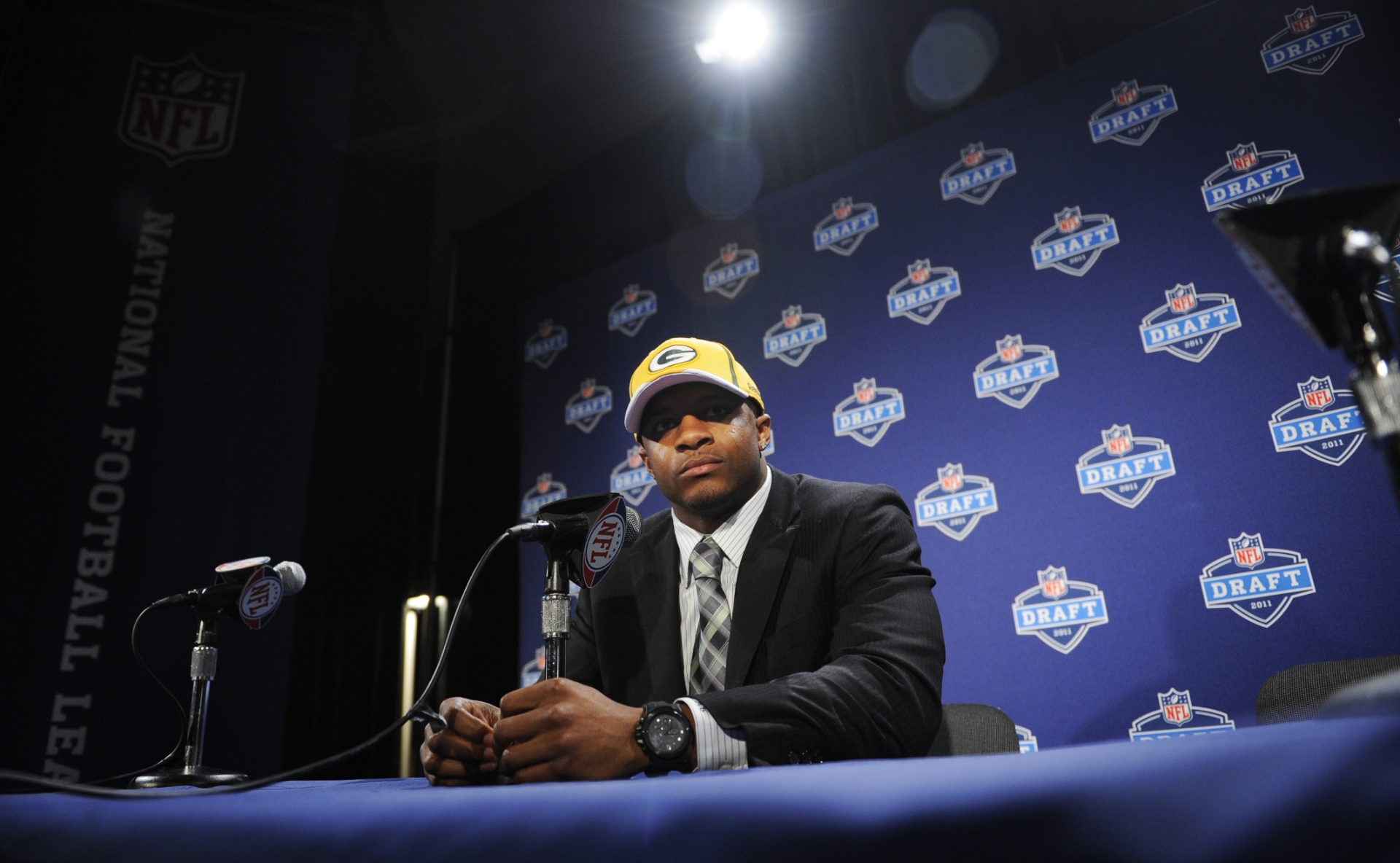 Randall was the 64th overall pick in the 2011 NFL Draft.
Photo by AP/Stephen Chernin.

Randall stayed at UK for three more semesters after his injury, with gutsy, swiss-army-knife contributions across the offense and special teams. He was drafted in the second round by the Green Bay Packers and went on to a long, successful career in the NFL. He’s never had issues with the knee he injured during his time at Kentucky.

“That was my freshman year of college,” said Randall. “14 years later and we’re talking about me still playing in the NFL. That’s a huge difference that one man’s made in my life—by helping save my knee, and my career.”