“He still dreams in vision.”

It was four days before Christmas, 2020. After staying up late playing together, Cacy Roberts and her sons—five-year-old Malakai and three-year-old Kameron—were asleep in her bed upstairs. At two o’clock in the morning, all three of them were startled awake by gunfire. 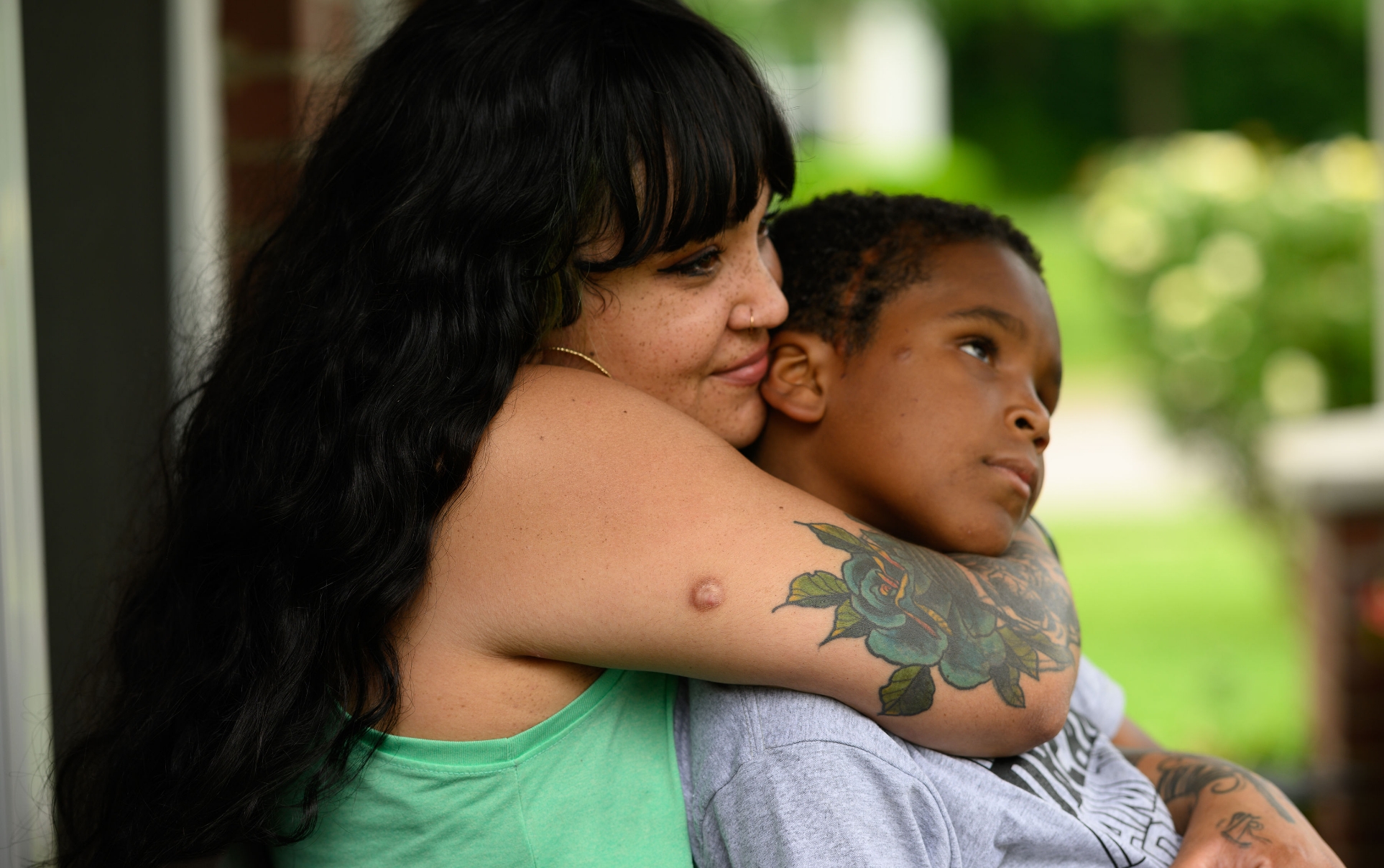 “There was glass everywhere,” said Cacy. “I just held him.”

Cacy quickly realized the shots were coming into the house and pulled Malakai and Kameron onto the floor. But as she reached over to grab Malakai, she was struck in the arm by a bullet—the same bullet that went through Malakai’s temple.

“He’s in shock. He’s not crying,” said Cacy. “I’m trying to hold him and he’s telling me he can’t breathe, he can’t breathe. He said his vision was going in and out. They took him to the hospital, and then they took me in another ambulance behind him.” 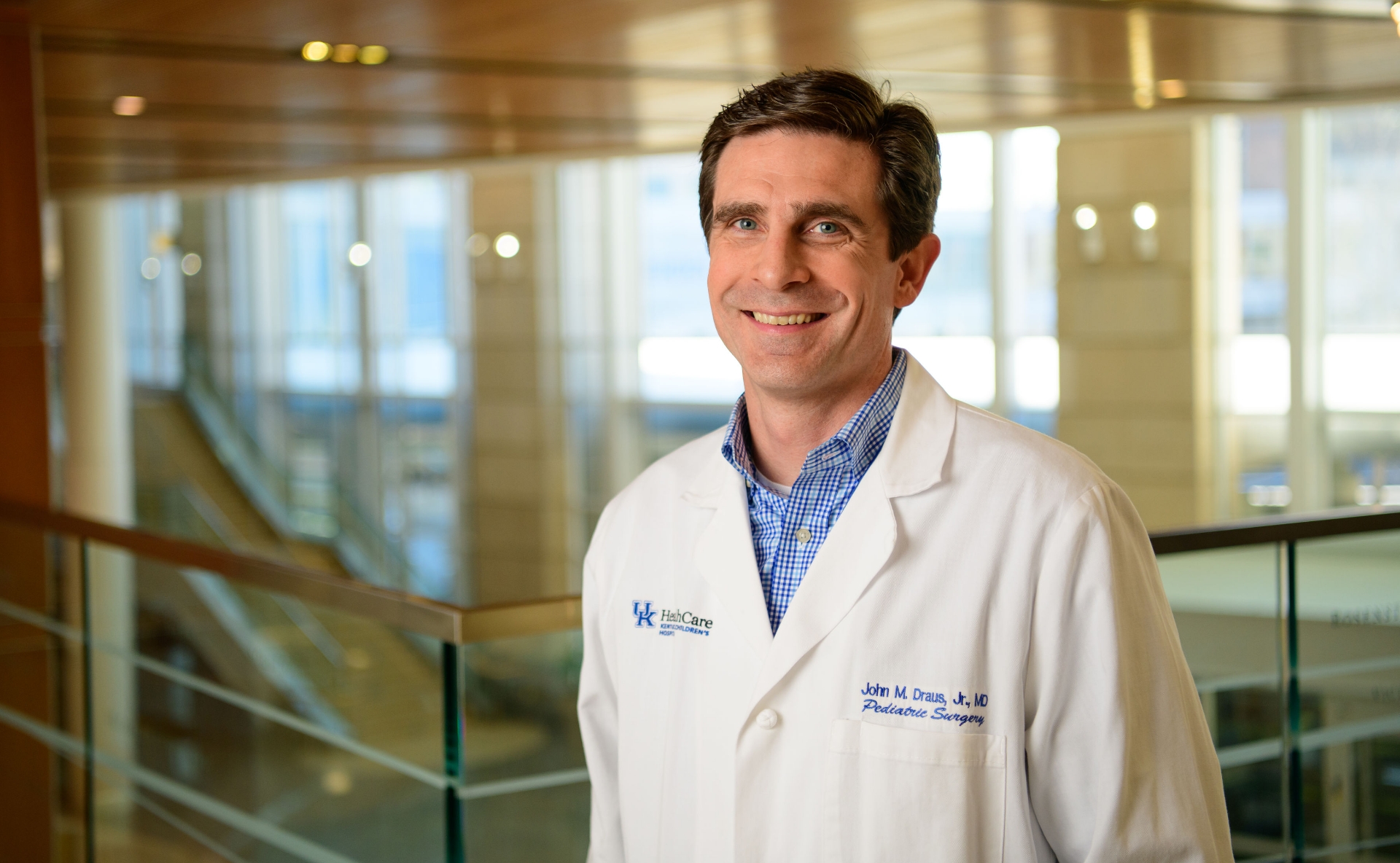 “I’m confident that despite his injury, he can go on to live a very fulfilling life,” said Dr. John Draus.

When Malakai arrived at the Makenna David Pediatric Emergency Center at Kentucky Children’s Hospital, Dr. John Draus, the on-call pediatric trauma physician, was encouraged by how alert and responsive he was.

“We were worried about his vision and his eyesight, but looking at the trajectory, I remember thinking this doesn’t appear to be a lethal injury,” said Dr. Draus. “The gunshot wound went in one side of his temple and out the other.” 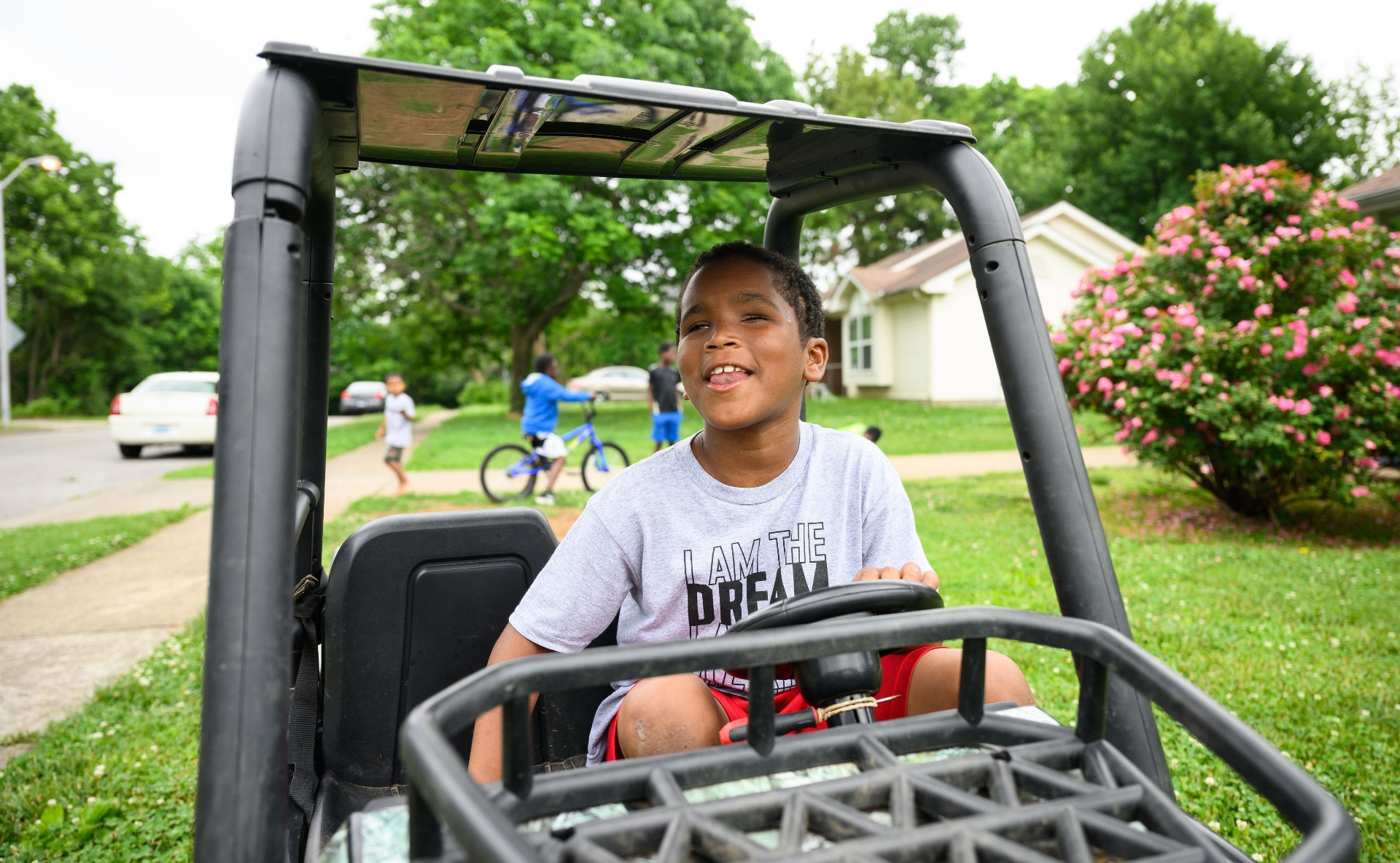 “He really likes to drive things,” said Cacy. “He always has.”

Malakai’s injury wasn’t fatal, but it was still incredibly serious: the bullet damaged his eyes and optic nerves, and fractured the front of his skull. He lost his sense of sight, taste, and smell. It was a devastating injury—but Malakai was still alive, and ready to prove his strength of spirit. 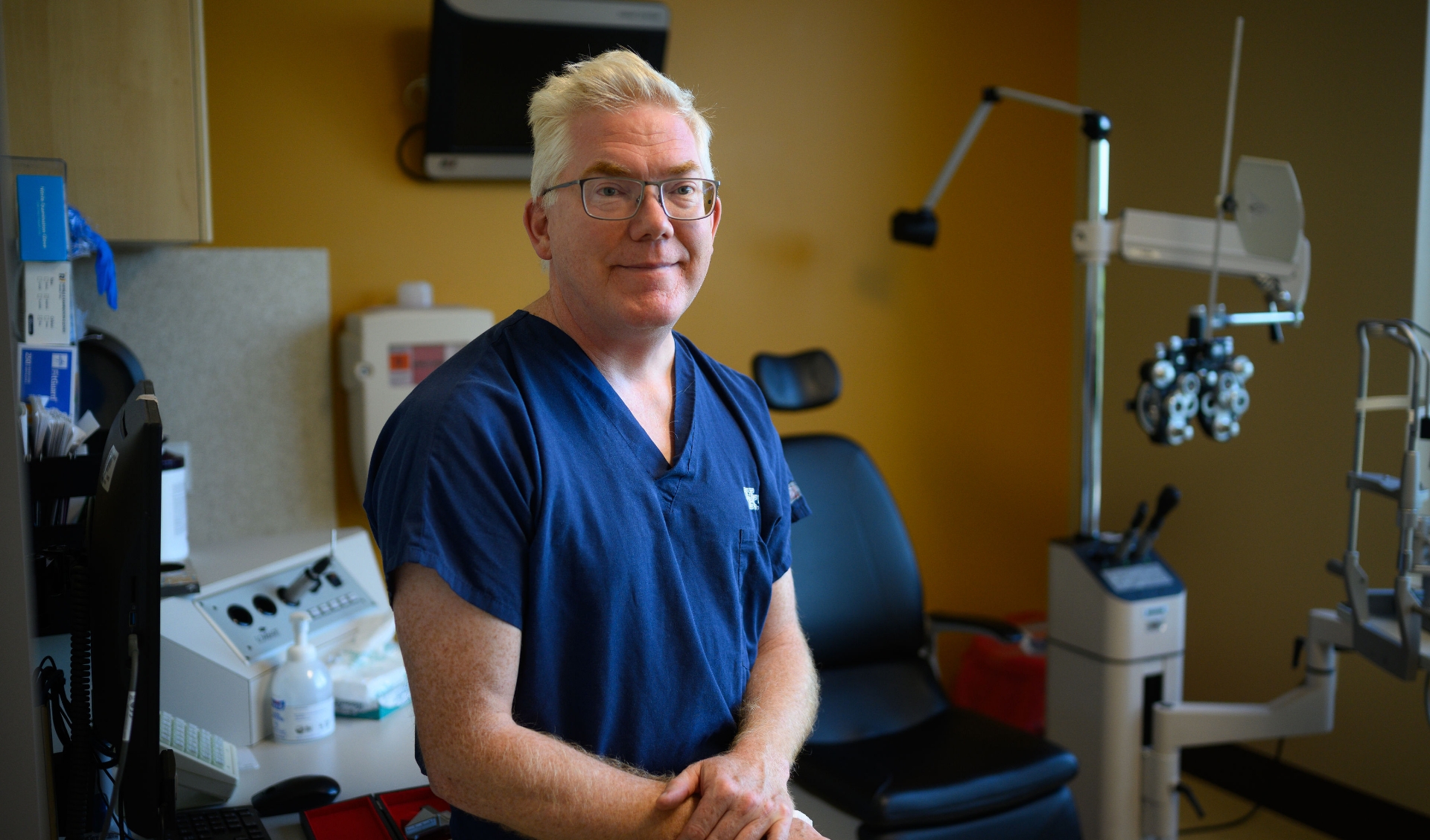 ”I have a lot of optimism for his future given the strength and resilience that he has,” said Dr. Peter Timoney.

Dr. Peter Timoney, an oculoplastics surgeon at Kentucky Children’s Hospital, first met Malakai and Cacy in the pediatric ICU the day after the injury, and was immediately impressed by both of them. Even though Malakai had direct damage to both eyes and optic nerves, he and Cacy remained strong and positive in those first few difficult days. 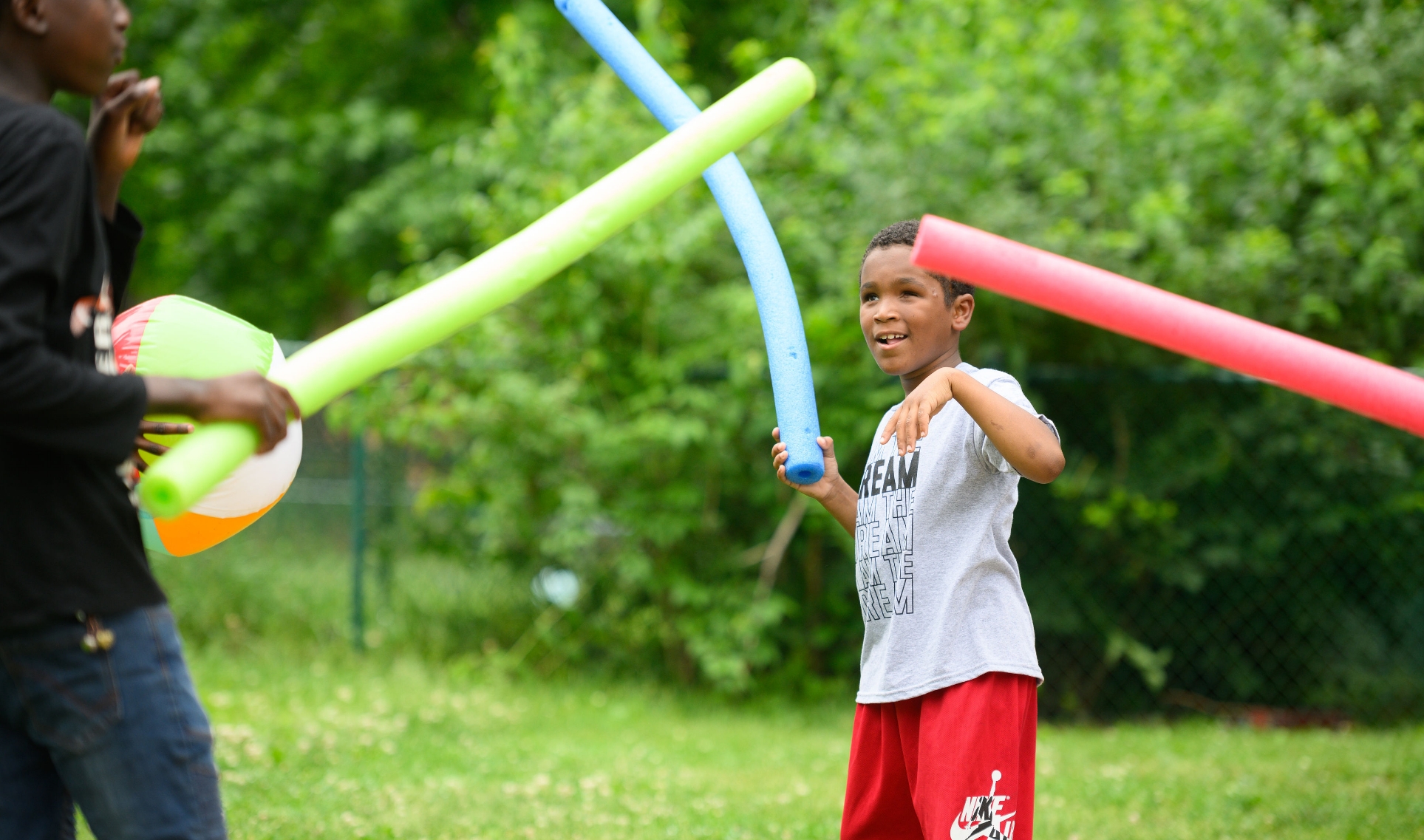 Malakai’s siblings and friends wear bells when they play together, allowing him to hear where they are—and keep playing the way he always has.

“We wanted to make sure that he wasn’t in any pain, because both eyes were severely damaged,” said Dr. Timoney. “We discussed the nature of the injuries, and what they entailed, with both Malakai and his mom.”

“Kids are young and resilient and heal very, very quickly,” said Dr. Draus. “At UK HealthCare, our thought process with children is that they just want to heal, get better, get out of the hospital and get back to doing things that kids do.”

“They did a really thorough job,” said Cacy. “I feel like he was being taken care of really well.”

Malakai was no exception. Incredibly, he didn’t require immediate surgery, and his medical team was able to get him home for a visit over Christmas before the surgery to repair his skull. After more close monitoring, Dr. Timoney and Malakai’s family eventually decided to remove his right eye with orbital implant placement. He was later fit for an ocular prosthetic. His team will continue to monitor his left eye, which still has an optic nerve, with hopes that new technology can offer him a chance at sight in the future. 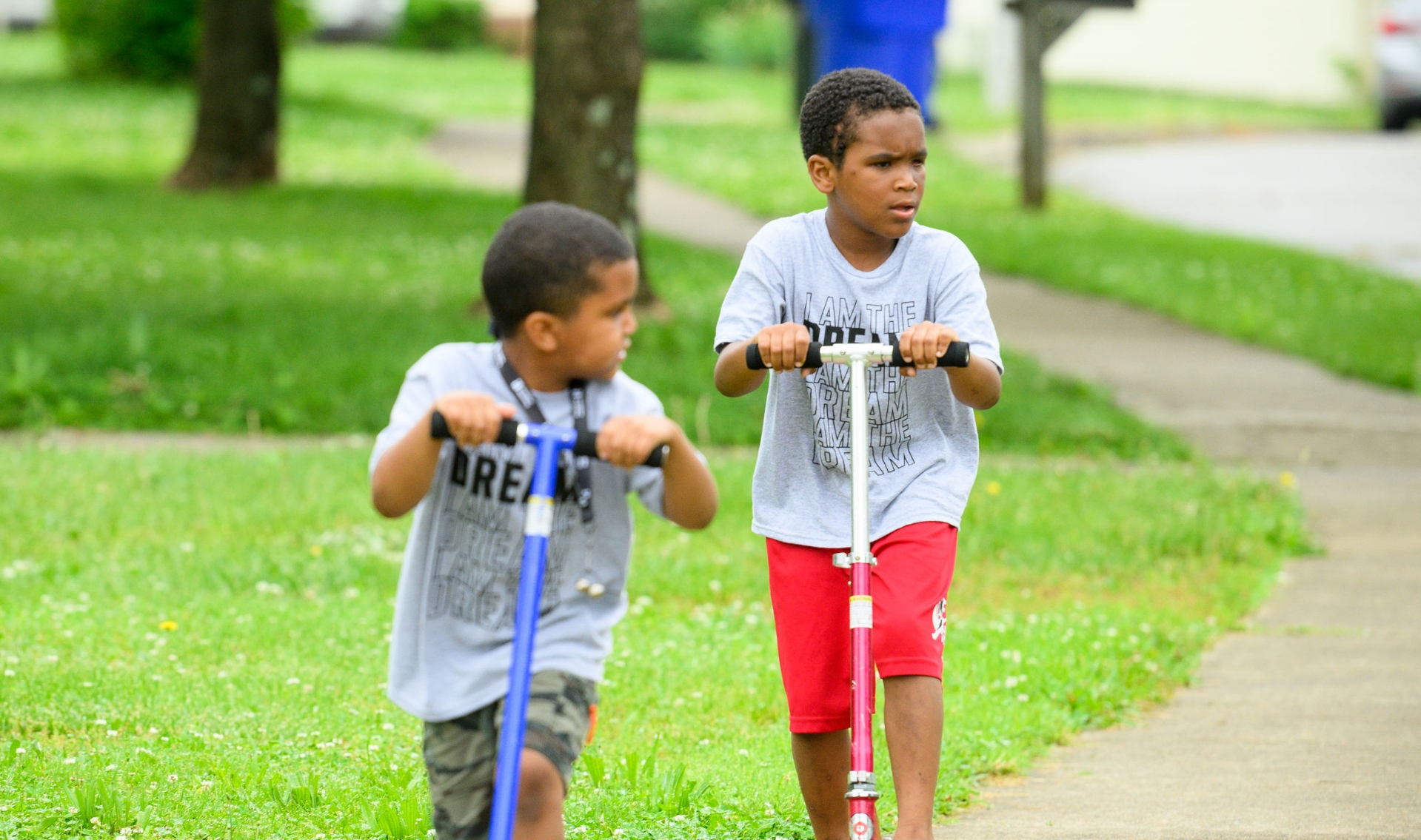 “He always has someone with him,” said Cacy. “They help each other.”

“The care was awesome,” said Cacy. “UK HealthCare is a top-of-the-line hospital, and we’re really lucky in that we were very close to such a good hospital and able to get good care for Malakai.”

“Malakai is very passionate, eager, and inquisitive—his questions are amazing! This, along with his mother’s determination, patience and understanding will be instrumental in fulfilling Malakai’s dreams,” said Dr. Timoney. “His injuries were a life-changing event, but I don’t think it will restrict him. This young guy is going places.” 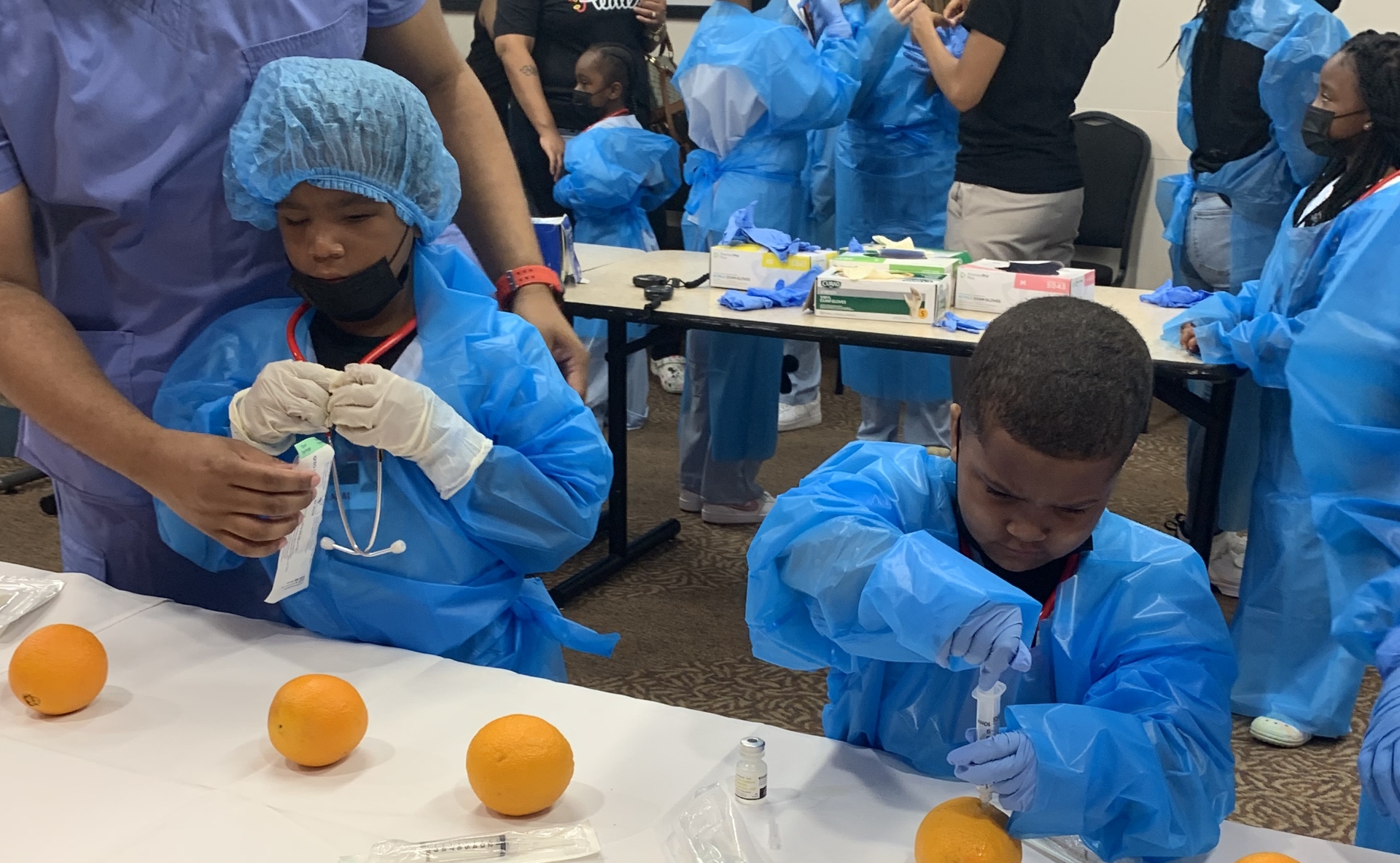 “I think he’s in a unique situation,” said Cacy. “He can help people that have gone through things like this.”

Dr. Timoney was right. Malakai recently joined the Future Healers program through the University of Louisville and Christopher 2X Game Changers. This outreach program identifies local children affected by gun violence and introduces them to the field of medicine. 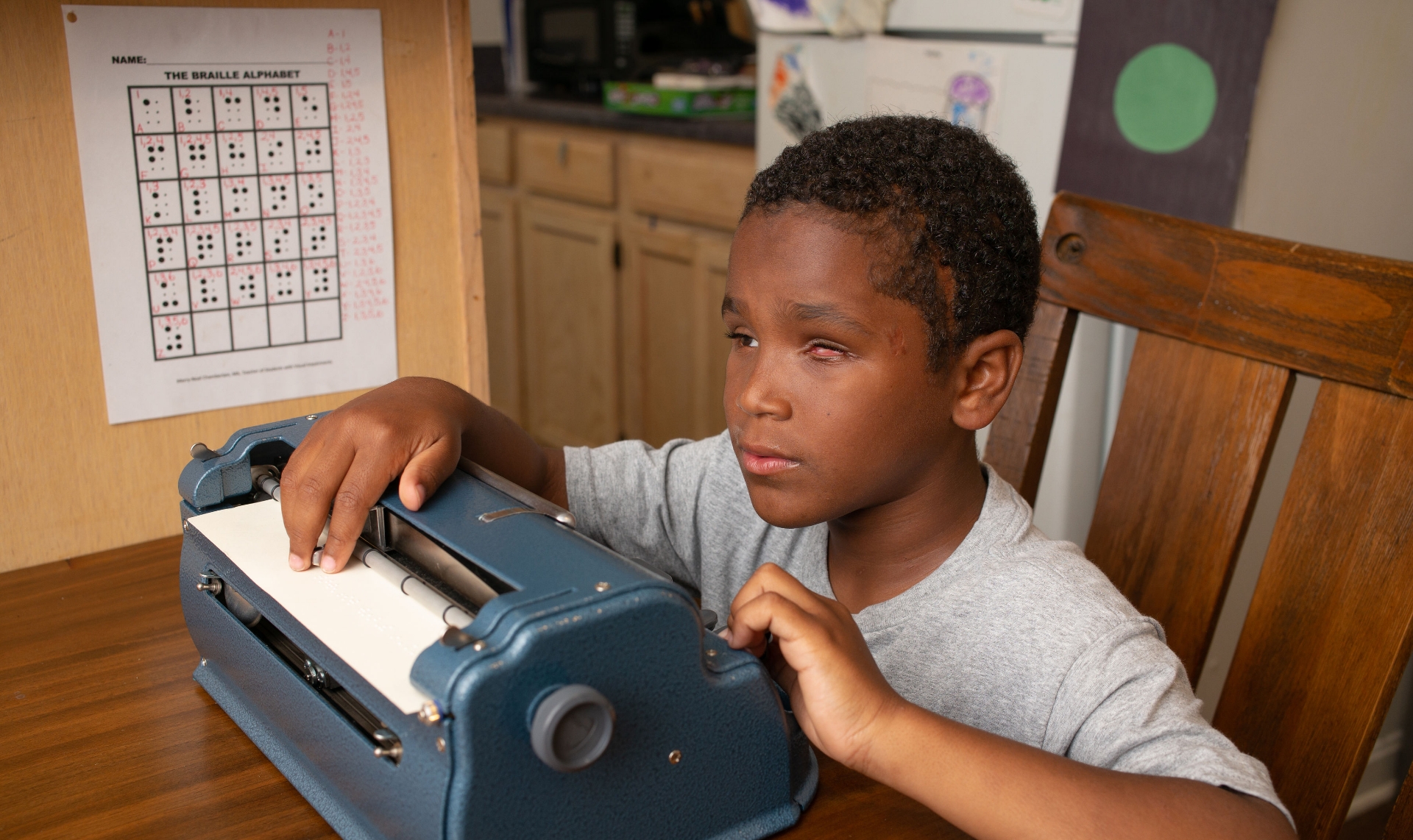 “His school has been so helpful,” said Cacy. “We’re lucky to have them.”

Malakai also has become a student at Kentucky School for the Blind, where he spent two weeks in the orientation program to learn how to manage schoolwork, living skills, socialization, mobility and more. The program offers short week-long courses every few months for kids like Malakai who are adjusting to their new loss of sight, and also helps coordinate daily support services at Malakai’s elementary school, where he receives braille and mobility instruction. 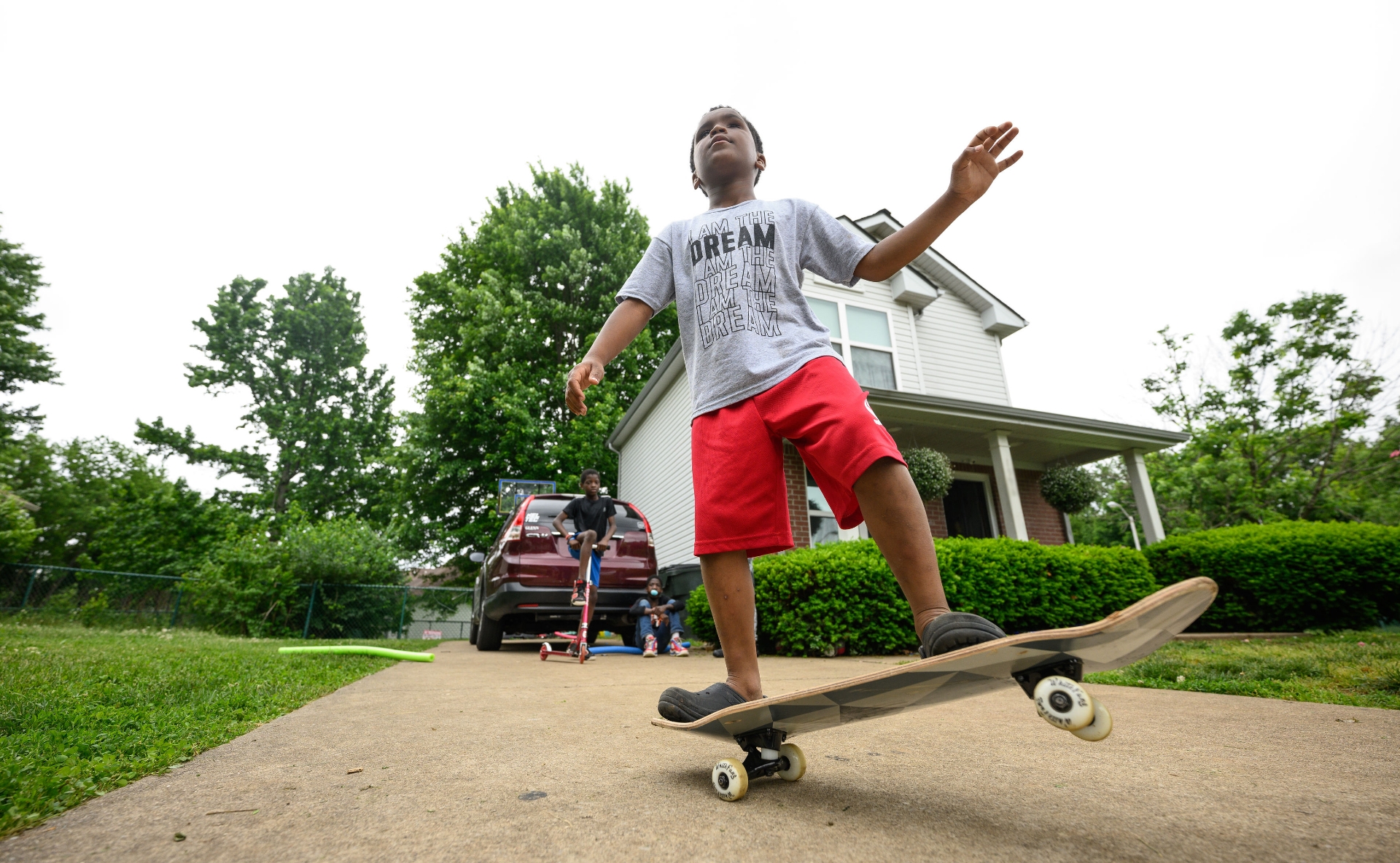 Malakai doesn’t let his disability stop him from being active.

“He’s very, very smart and very curious,” says Cacy. “He likes to take things apart, see how they work. They call him the question master in class, because he asks so many questions. He really likes to ride his bike, really likes to drive things.”

Malakai continues to adapt, thrive, and surprise everyone around him. He recently watched a movie with his mother—one that he had seen shortly before his injury. As Cacy began narrating the action, Malakai stopped her and said he remembered the movie, and to her shock, he correctly explained what would happen next on the screen. 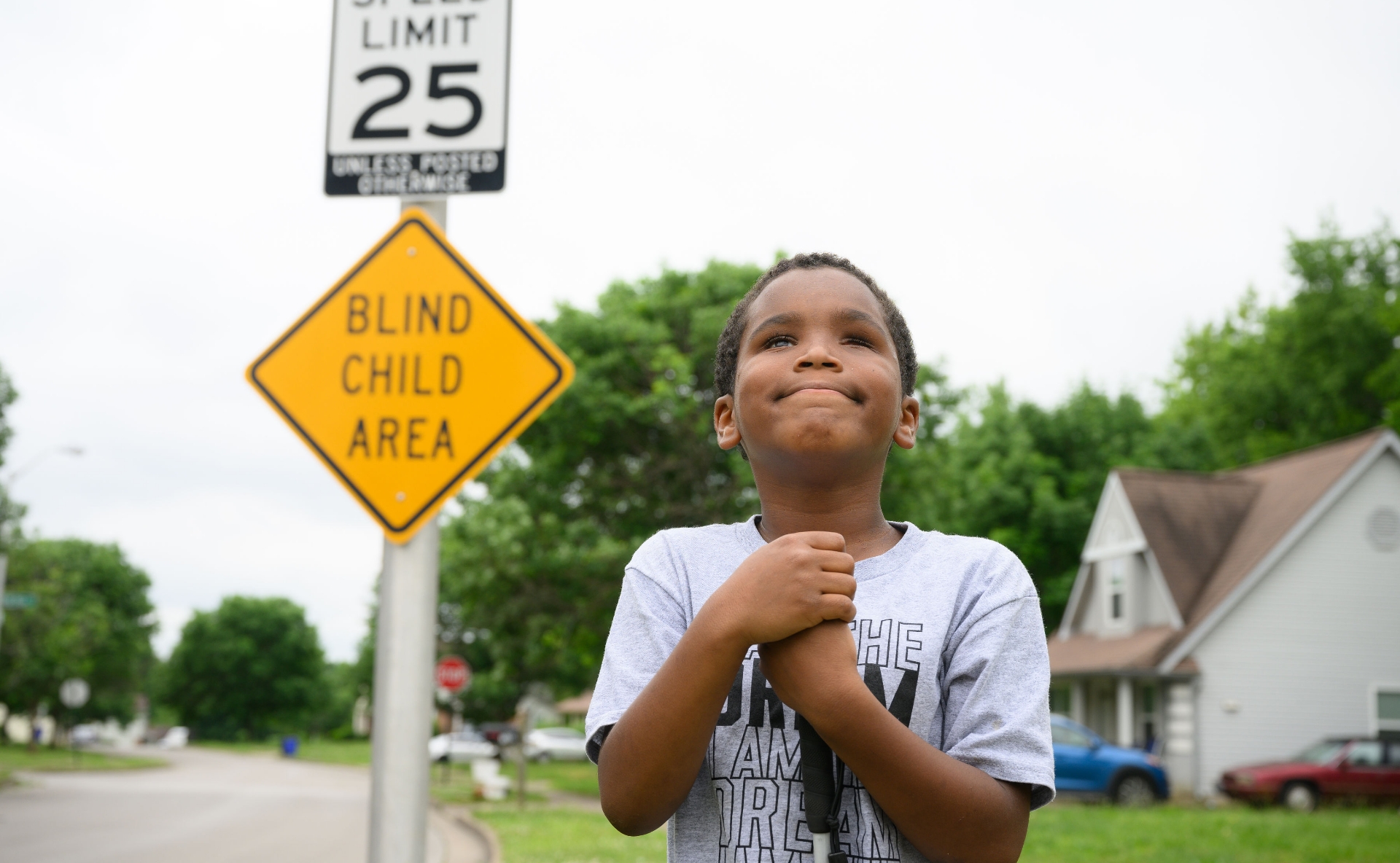 “I definitely think he’s going to do something good with this life,” said Cacy.

“He has a really, really good memory. He’s just amazing,” says Cacy. “He tells me he still dreams in vision. He has adapted really well to this experience. I’ve always felt like he was a special kid, but now everyone gets to see it, too.” 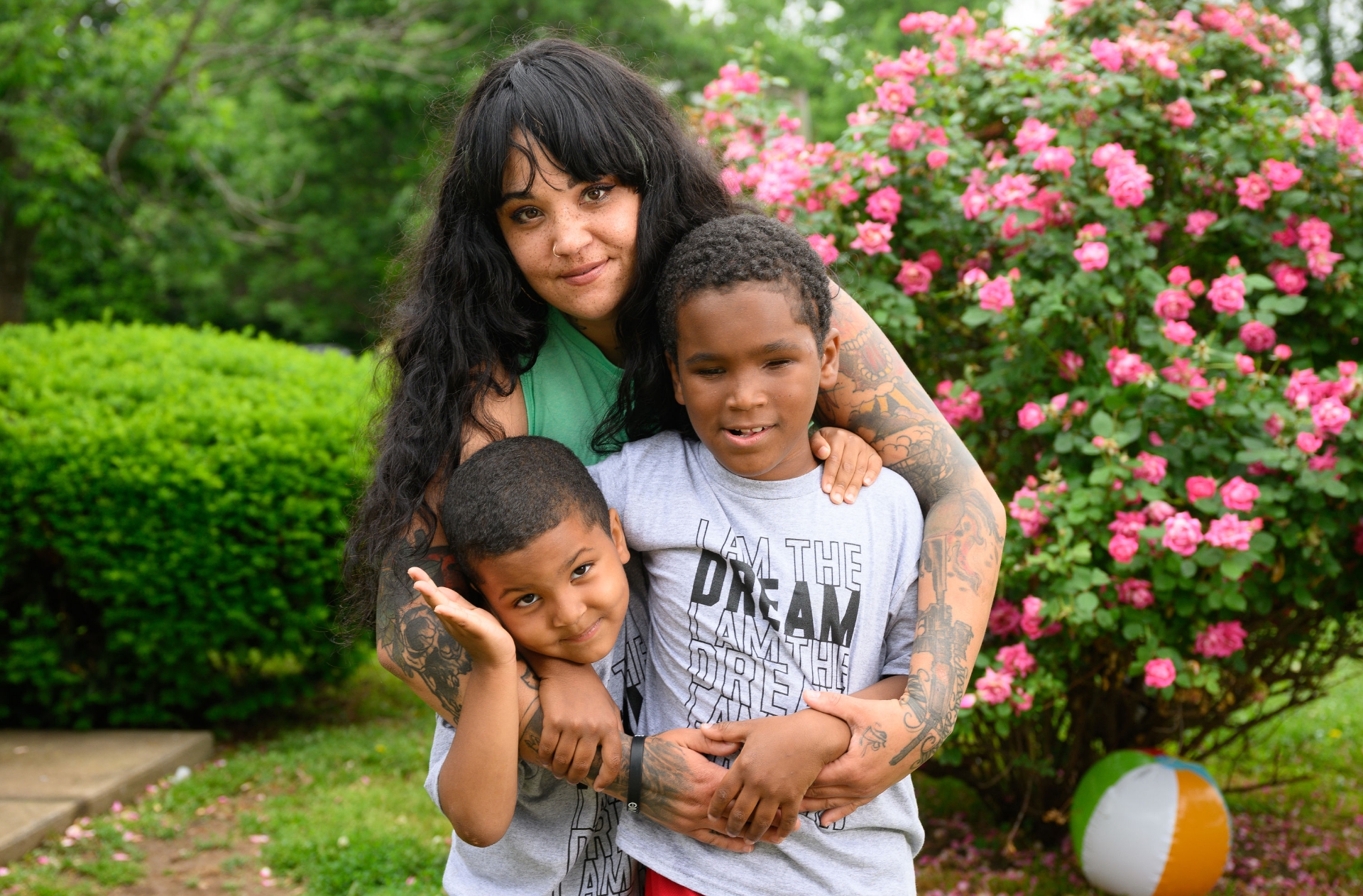 “My ultimate goal is for him to be happy,” said Cacy.