126. That’s how many offer letters Callie Garner Thompson received to swim at the collegiate level. Long before that, at the age of five, she earned the nickname “Fly Baby,” learning to swim before she even knew how to read. Callie was born to swim—but you’d never guess that it was a near-fatal asthma attack that led her to dive in for the first time. 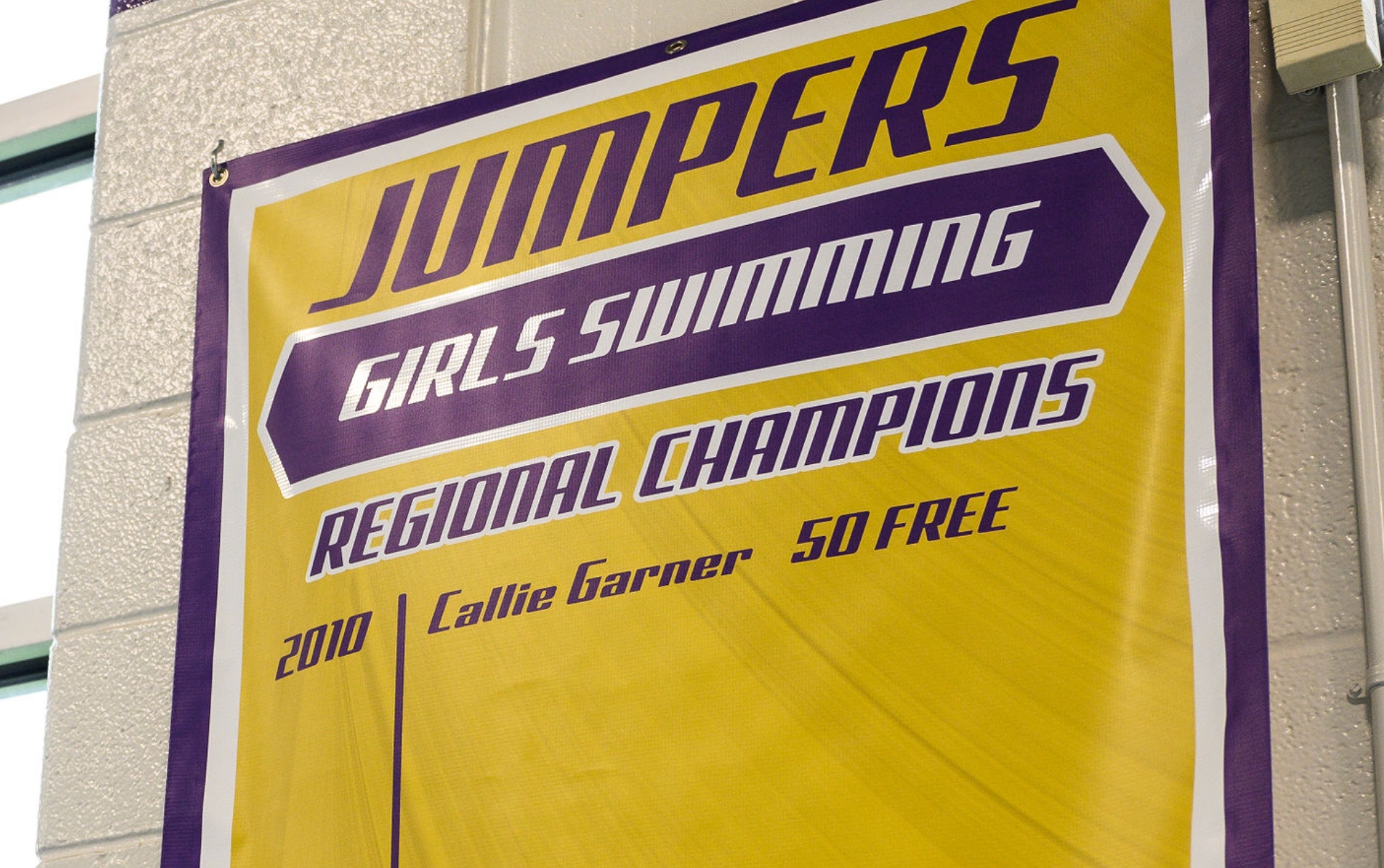 “She owns just about every one of the female records but three,” said Callie’s mom, Kim.

One late October night when Callie was only four, her mother, Kim, woke up to her daughter making an unfamiliar sound.

“She never once wheezed,” said Kim. “She had the strangest cough and it was like she was choking. I woke my husband up and said, ‘I know you’re going to think I’m crazy, but I’m taking her to the emergency room.’” 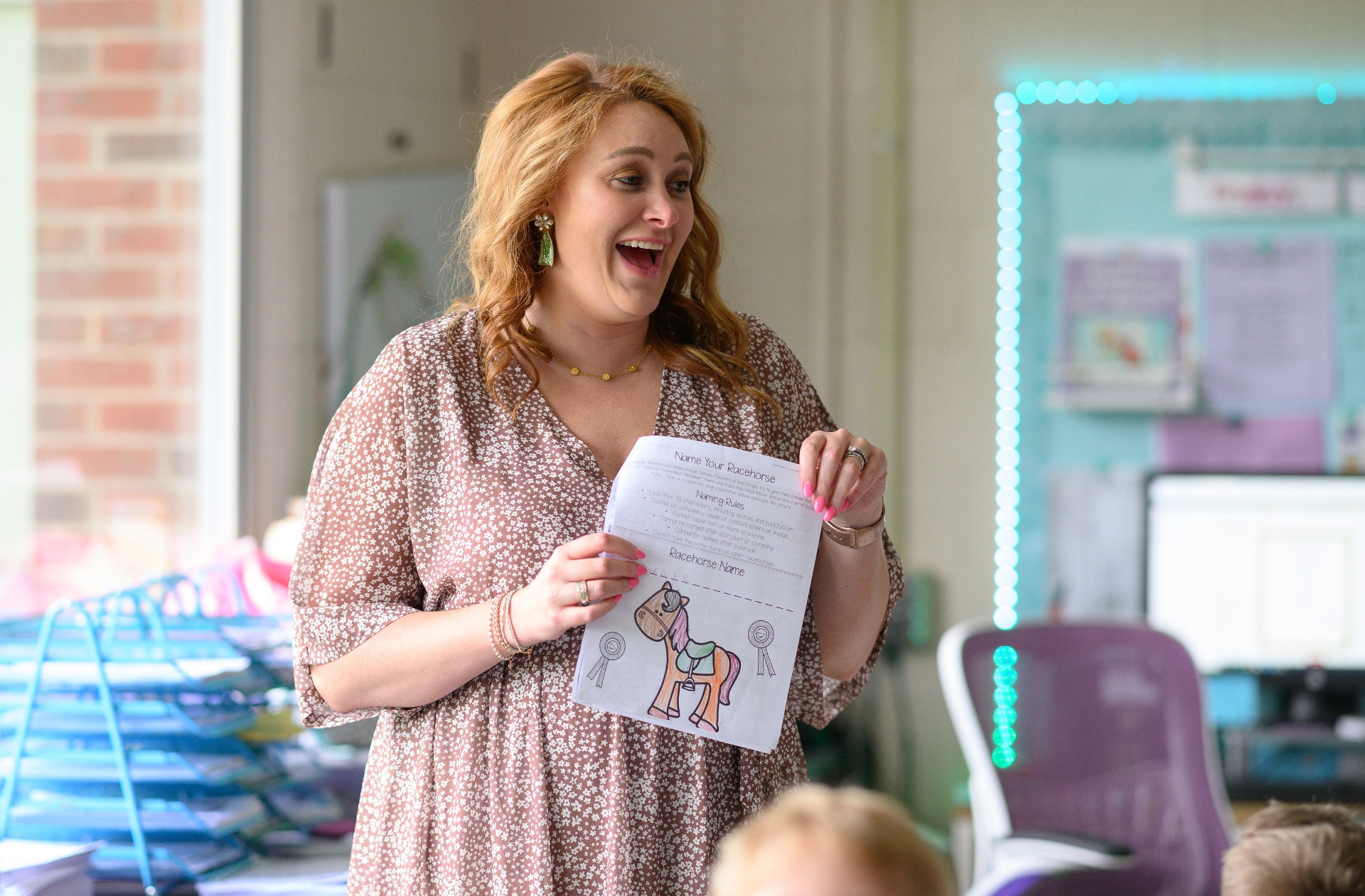 Callie brings her signature energy and enthusiasm to her job as a second grade teacher.

At her local hospital, Callie was misdiagnosed with early onset pneumonia. She was sent home to recover, but her cough continued to get worse. 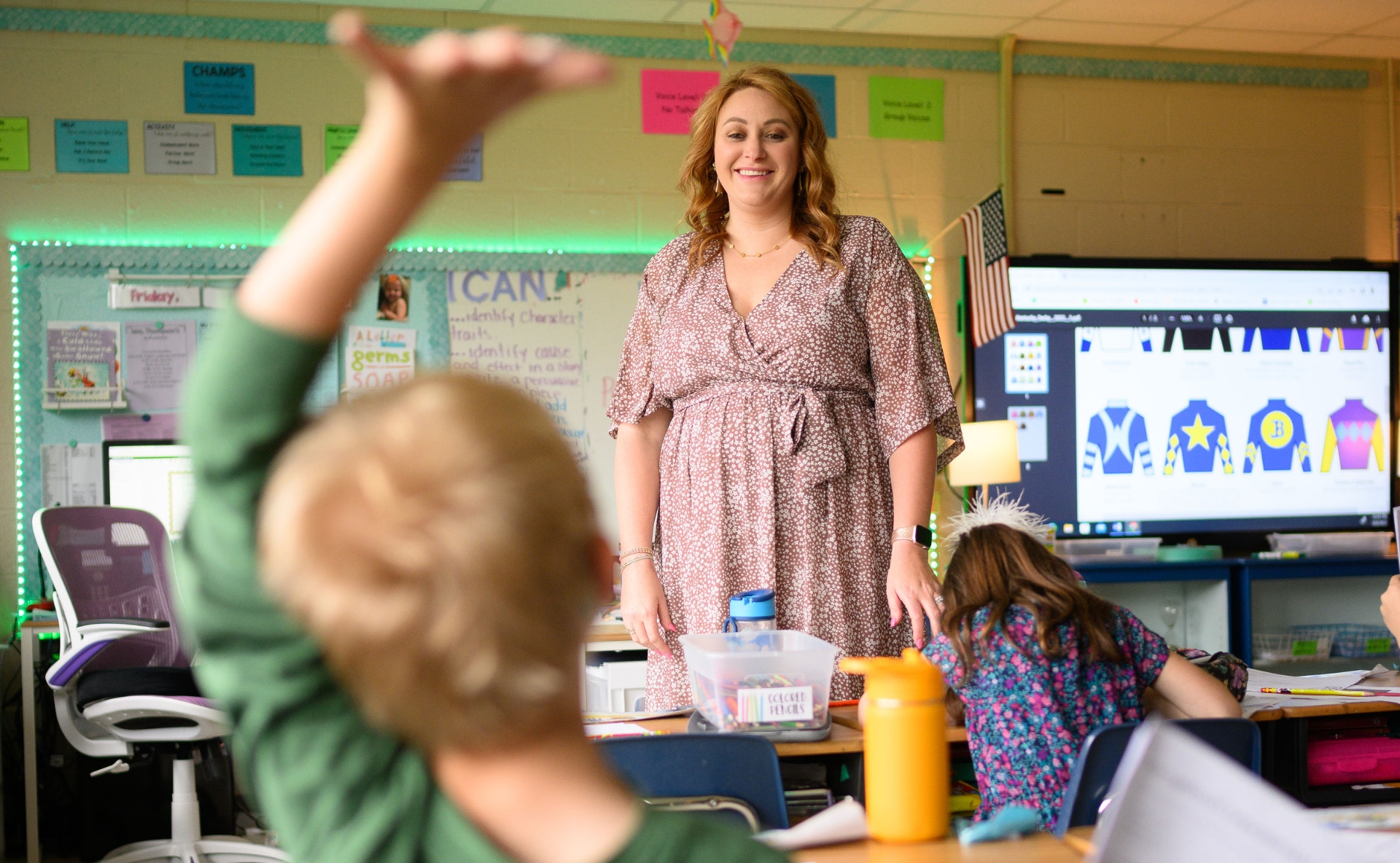 “As a teacher, I communicate with these kids about staying calm and controlling their body and their breathing,” said Callie.

The Garners knew they needed a second opinion, so Kim reached out to their family physician, who was adamant that Callie return to the ER to be airlifted to UK HealthCare’s Makenna David Pediatric Emergency Center in Lexington for treatment. 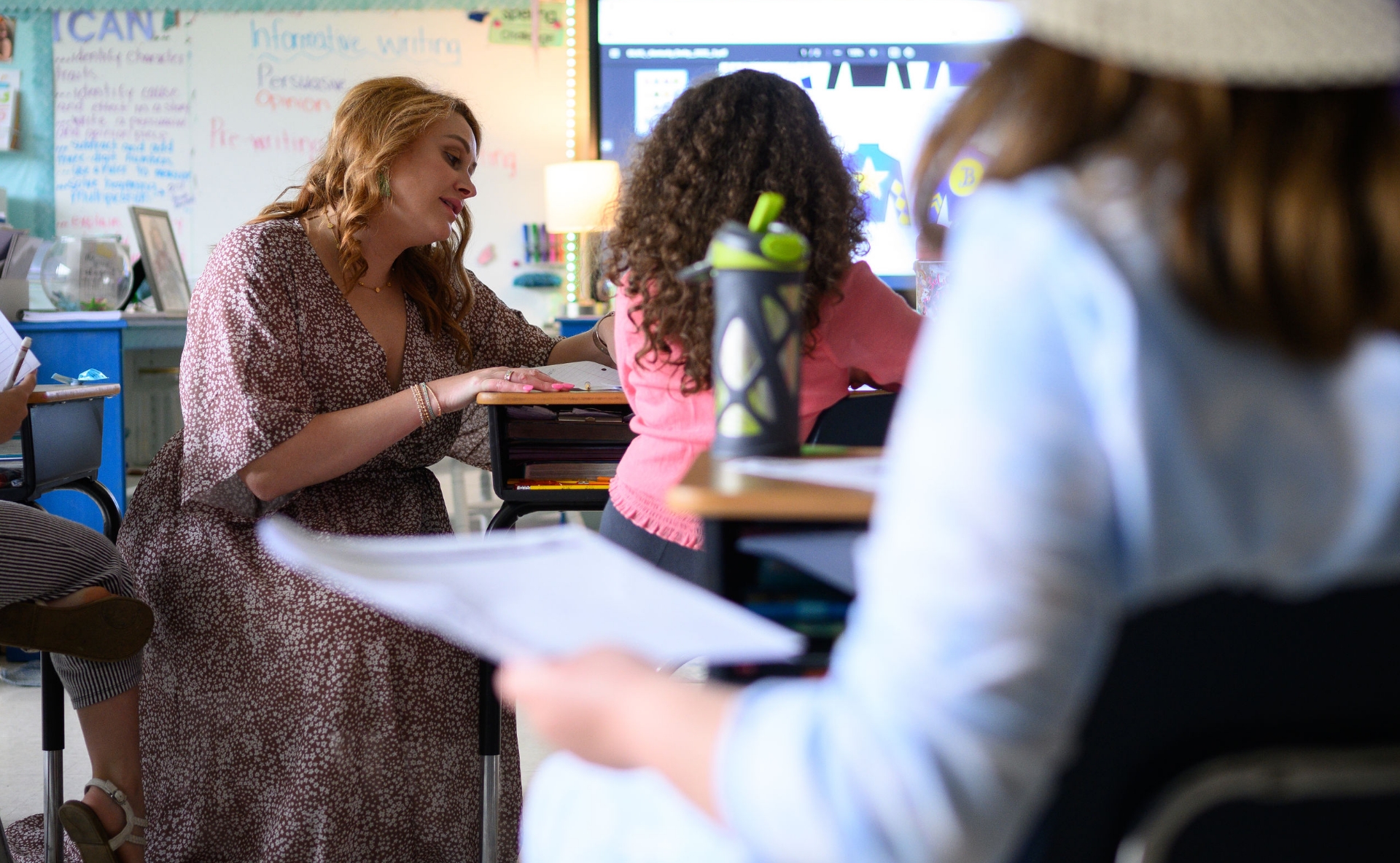 When Callie arrived at Kentucky Children’s Hospital, a series of x-rays and evaluations confirmed that she was actually experiencing an extreme asthma attack. It took several different pediatric asthma medications before she started responding to treatment. She would stay in the hospital for a week, receiving round-the-clock care and monitoring until she recovered enough to go home. 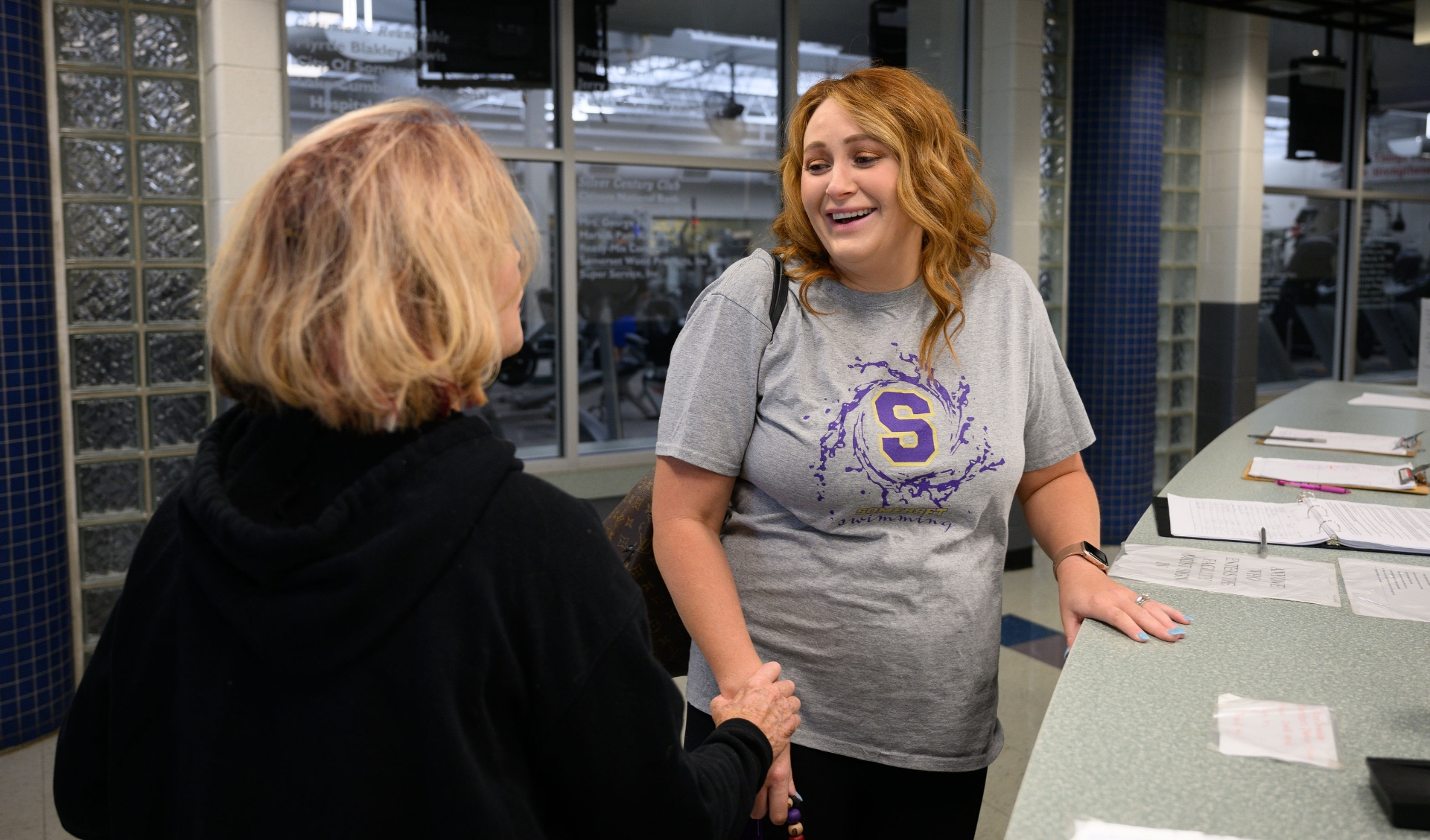 After growing up in the swim community, Callie is now a coach at her local aquatic center.

“I remember my mother making the comment that nobody complained, everyone was just so happy,” said Kim. “They just wanted you, as a parent, to feel better, and they wanted to help your child.”

As the Garners got ready to leave, Dr. Jamshed Kanga, Chief of the Division of Pediatric Pulmonology and Callie’s doctor during her stay, prepped them on how to care for an asthmatic child. He offered a piece of advice that’s echoed in Kim’s mind ever since. 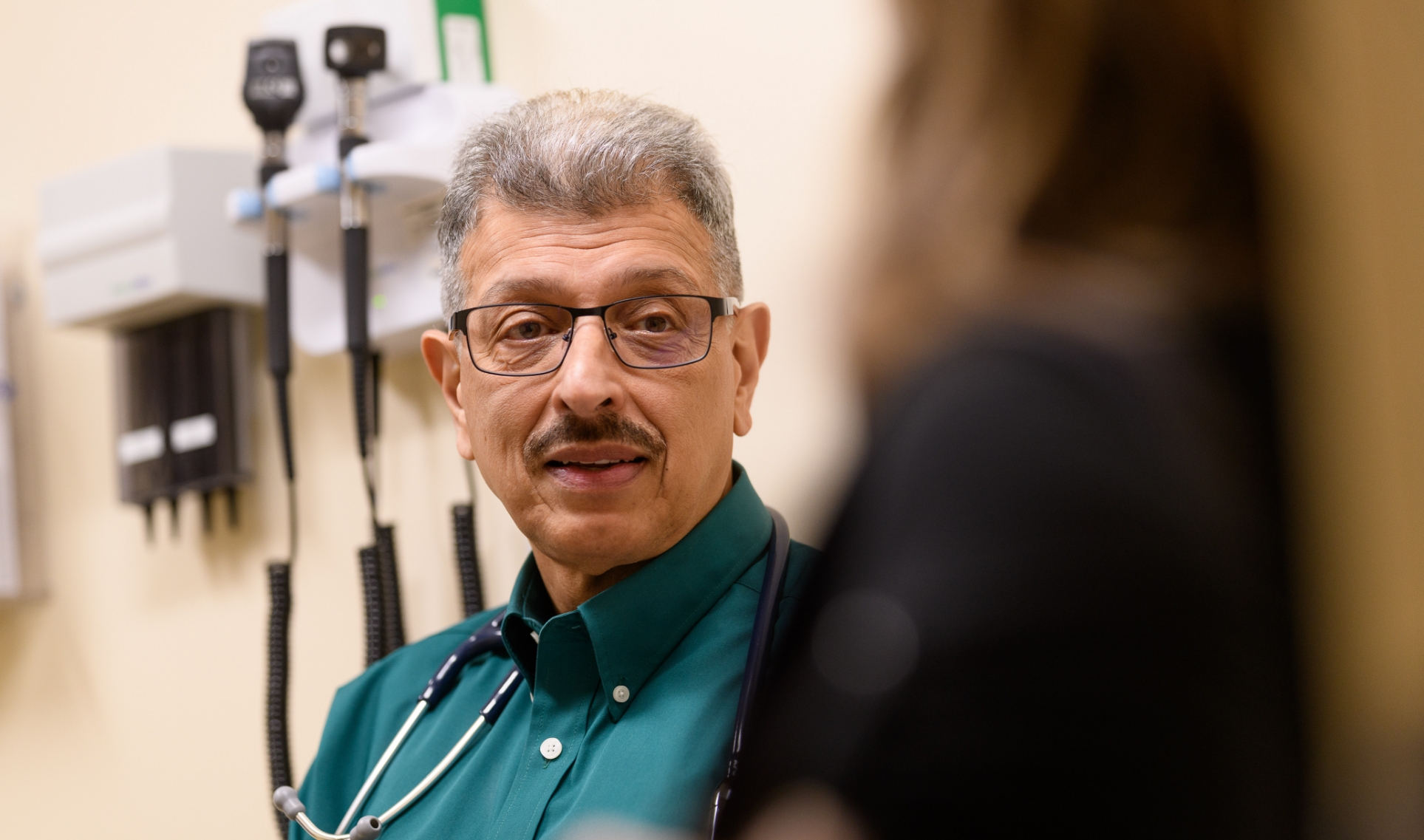 “Dr. Kanga was just so sensible and calming,” said Kim.

“He sat us down and said, ‘You have to let her live.’ That’s the one thing we see with parents walking away from here–they hold their children back. You’ve got to let her go and live a normal life,’ said Kim. “That was the greatest piece of advice that he gave us.” 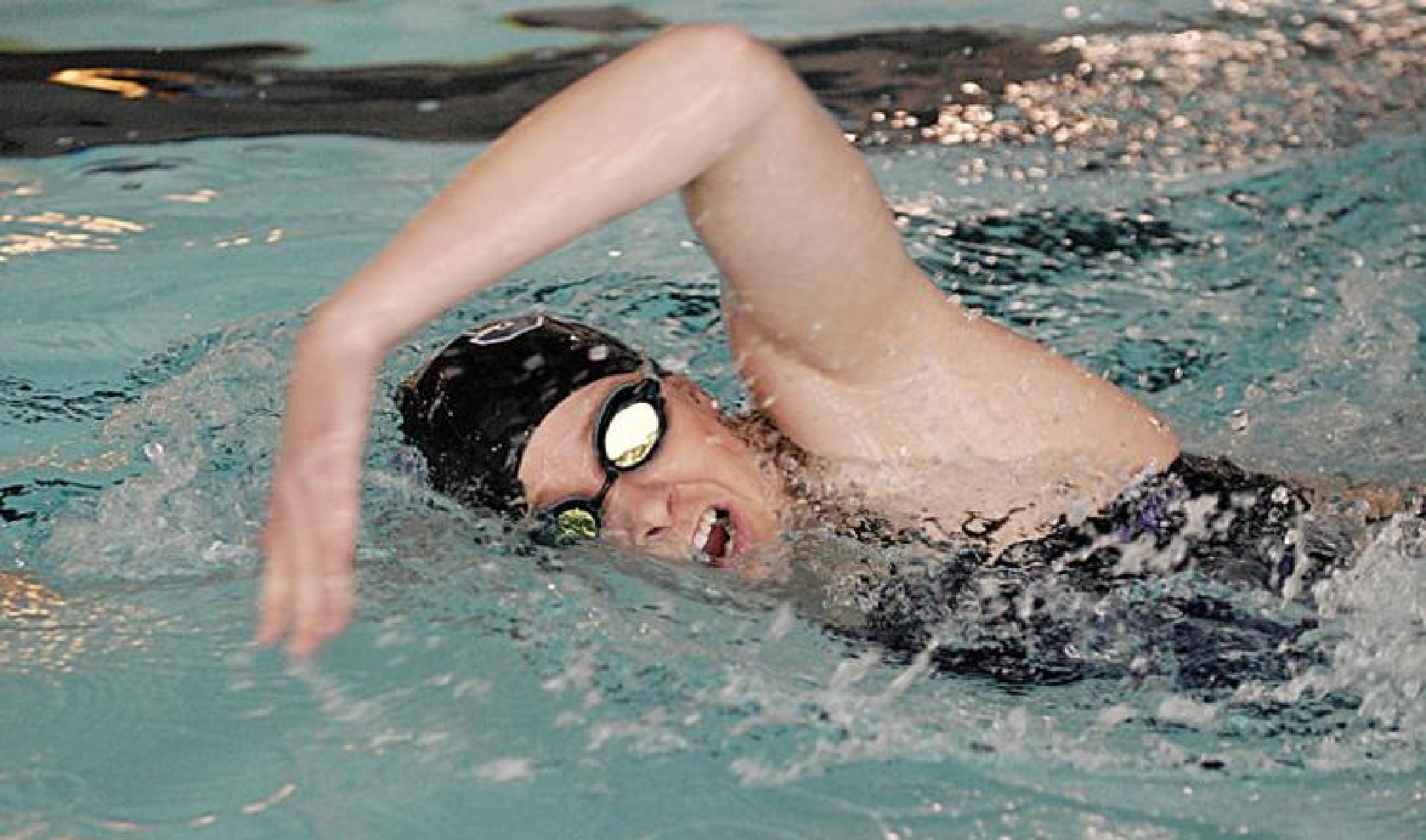 “[Dr. Kanga said] if she started swimming, it would be a good possibility that she could outgrow the asthma and beat it.” said Kim.
Photo courtesy of Steve Cornelius/Commonwealth Journal.

Dr. Kanga, who also had asthma as a child, told the Garners one more thing: get Callie into swimming, and do it soon. Swimming is one of the best exercises for people with asthma, building up the muscles we use for breathing. The warm, humid environment is also less likely to trigger asthma symptoms than other sports. Research suggests that swimming increases lung function and cardiopulmonary fitness, without posing any serious side effects in patients with stable asthma. 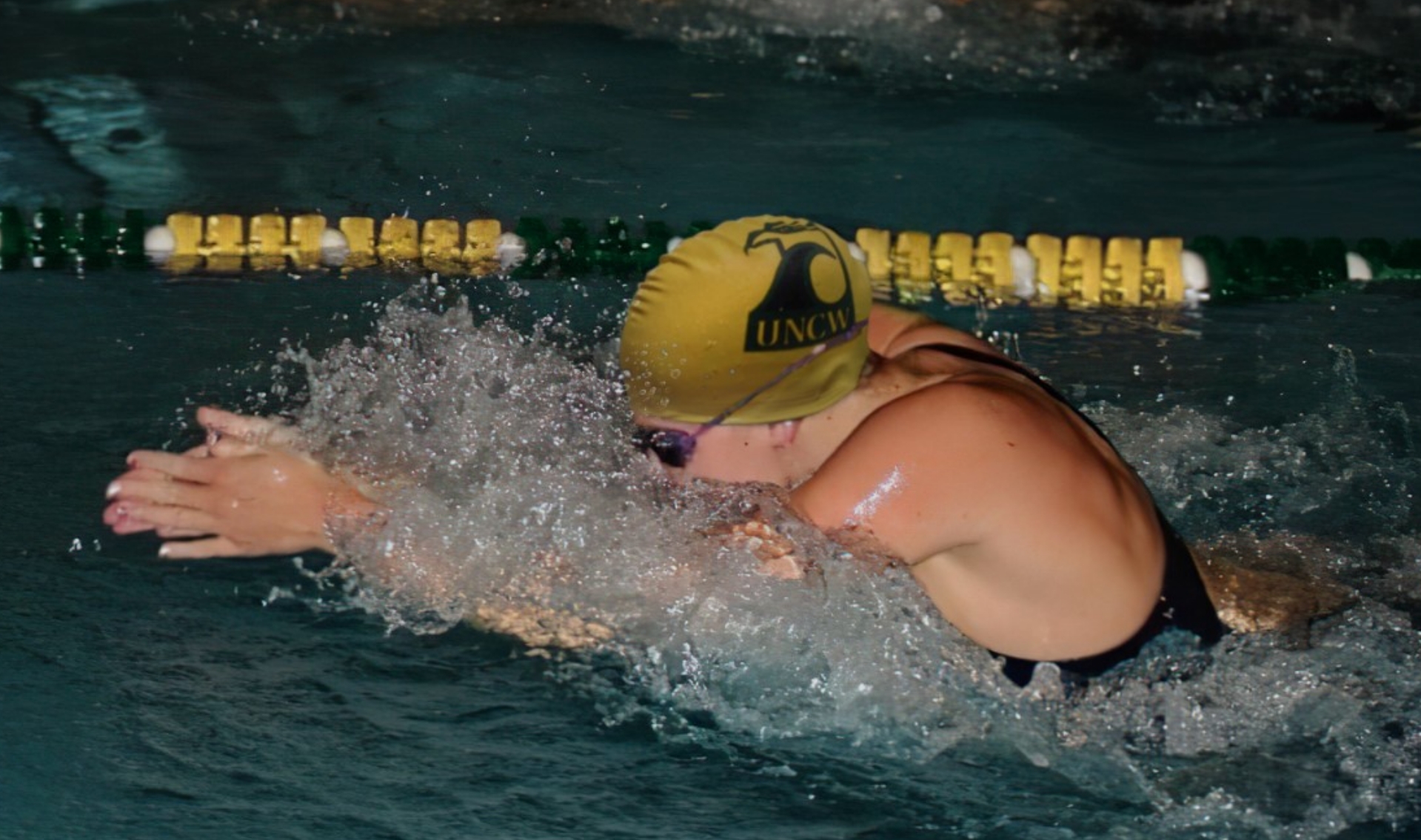 “When she went to college for swimming, she was on no medication,” said Kim.

Callie took to swimming like she was born for it, learning to listen to her body, control her breathing, and increase her strength and stamina—and her determination paid off. She swam with UK’s club team from seventh grade onward. She was selected as part of a group of Kentucky swimmers to train at the high-altitude Olympic training facility in Colorado. And she achieved her goal of swimming for a Division I school, eventually selecting UNC Wilmington from the more than 100 collegiate swim offers she received. 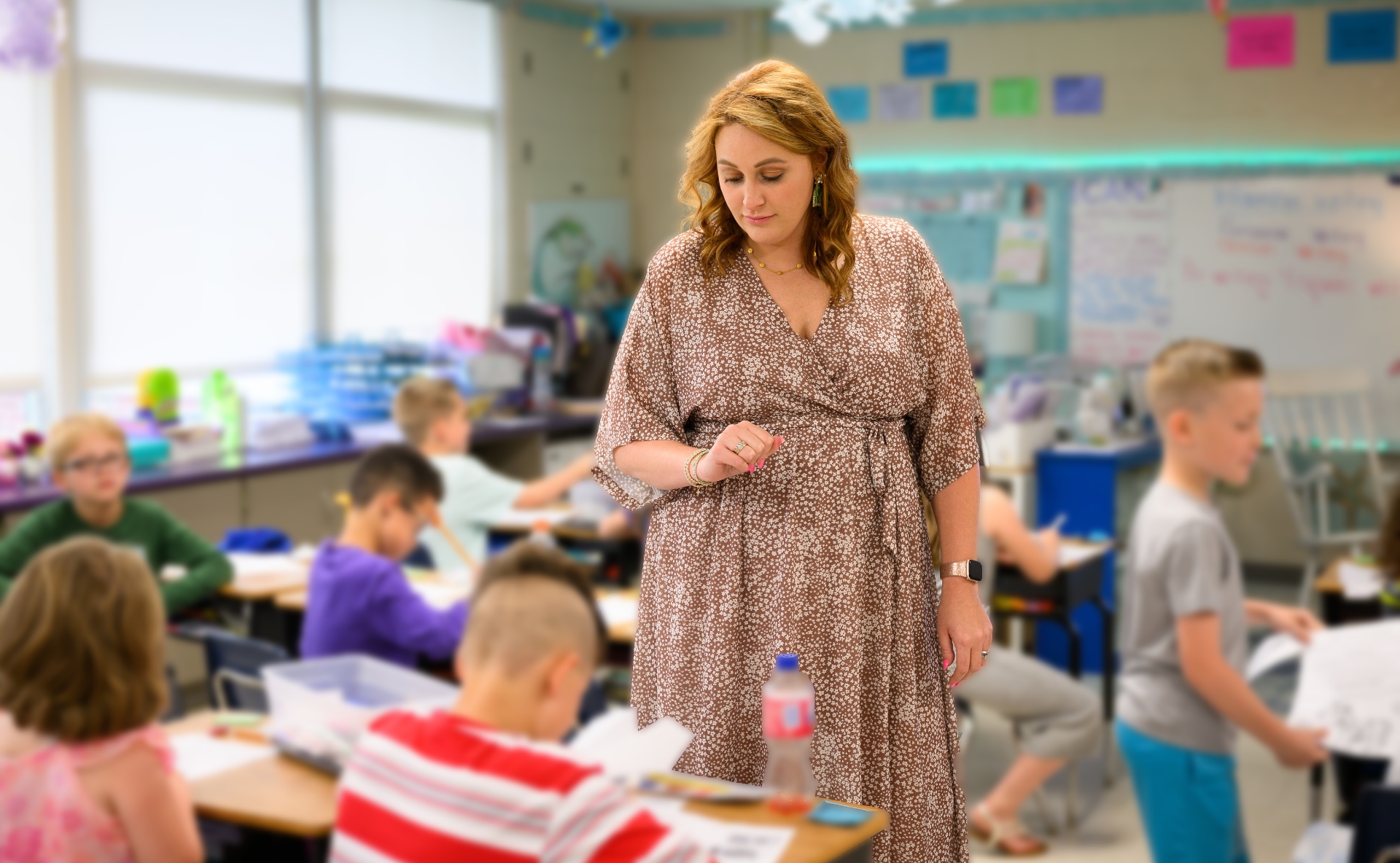 “It's made me a more responsible, hardworking, goal-setting person,” said Callie.

“I’ve grown so much as a person from swimming,” said Callie, who now teaches second grade and coaches a local high school swim team. “I set so many goals for myself, and I still try to set goals in my life, and that’s something swimming taught me. From a young age, I told myself ‘I’m going to swim Division 1.’ That was my goal and I was able to work to that level. And now, I’m excited to give back to other swimmers.” 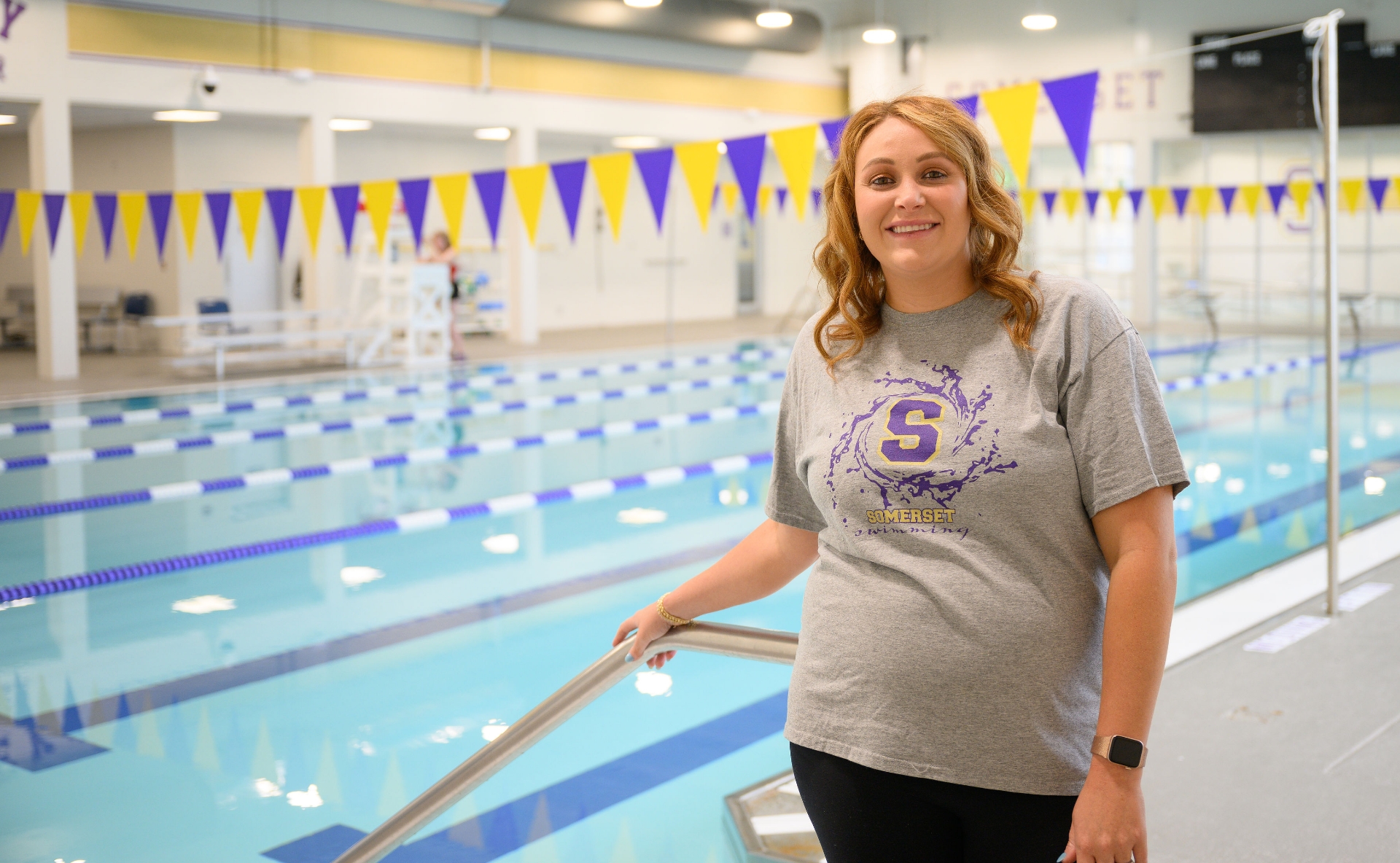 “I have many swimmers on my team with asthma, which makes me a good advocate for them,” said Callie.

As a coach, Callie advocates for swimmers with asthma, helping them learn how to listen to their bodies and pay attention to their breathing. The lessons she learned through swimming have rippled throughout her teaching, where she’s able to help students with anxiety, asthma and other medical conditions control their breathing. 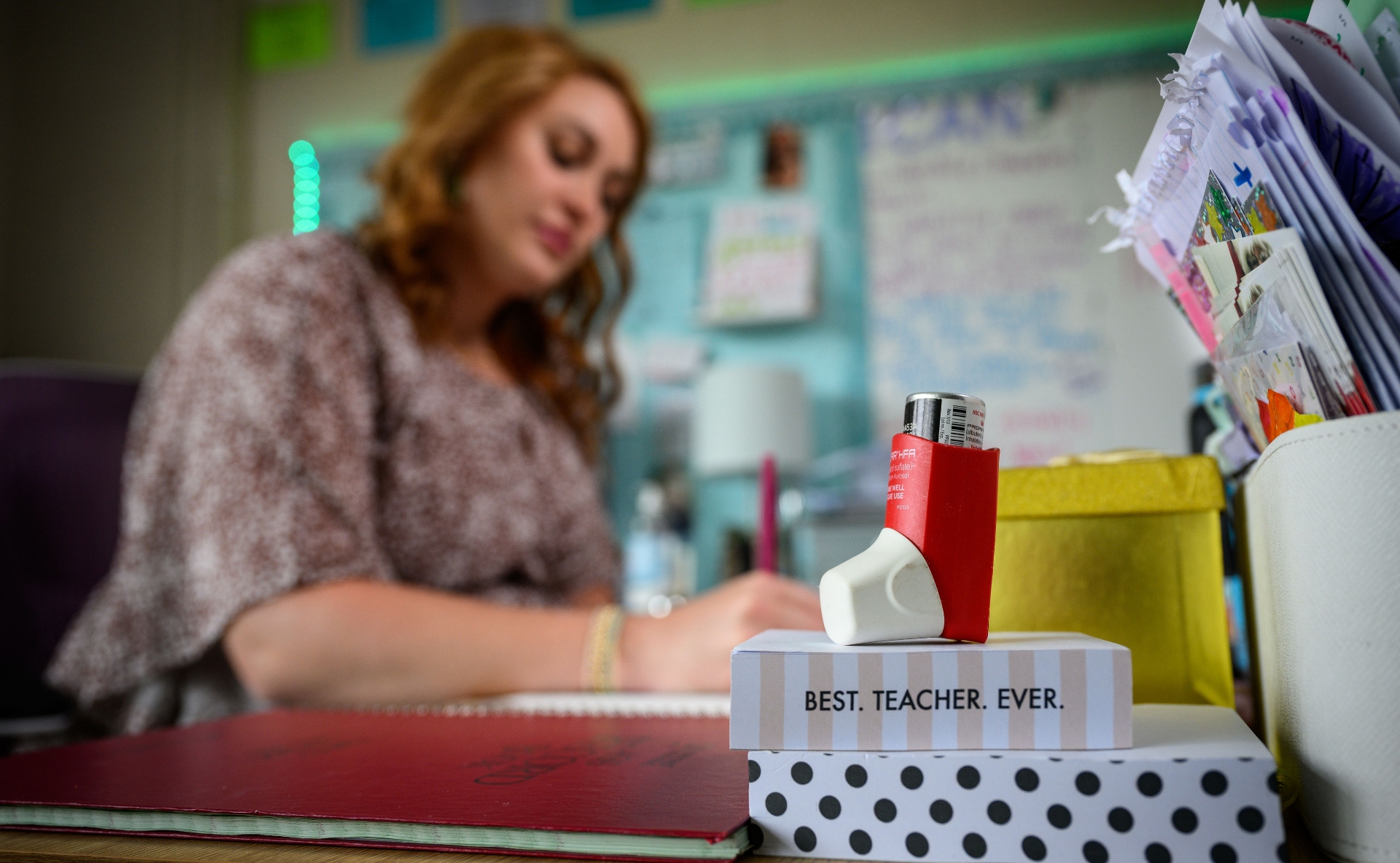 Callie still keeps an inhaler nearby for emergencies.

It’s been almost 26 years since Callie was first diagnosed with asthma, and today, advances in healthcare, resources and technology mean the outlook for asthmatics has never been better. Beyond traditional inhalers, Dr. Kanga said there are many new treatment options—things like genetically engineered proteins called biologics, which target specific substances in the immune system that cause inflammation. 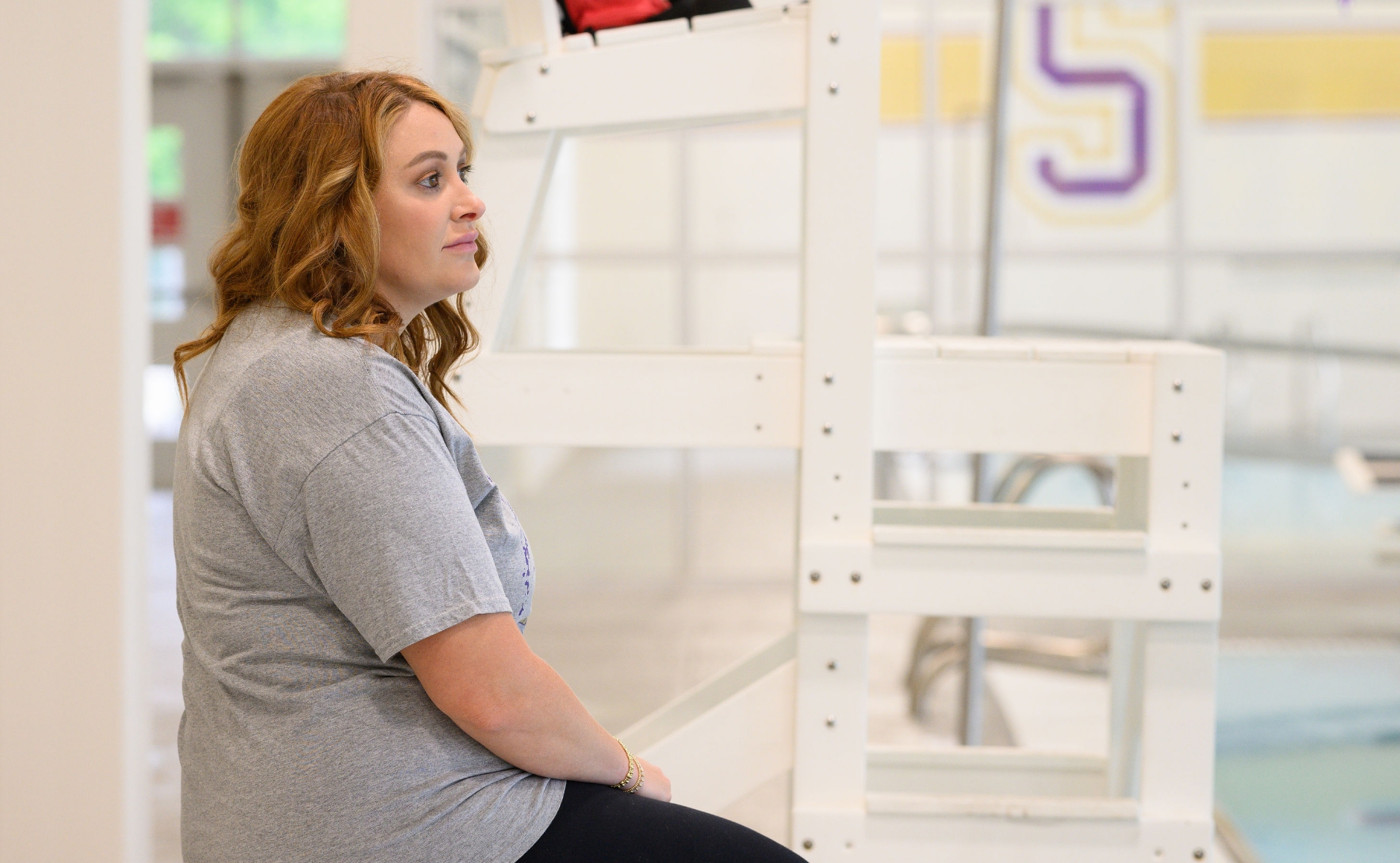 “It took years, but eventually she was weaned off the medications,” said Kim.

“Treatment for asthma has really come a long way, and at Kentucky Children’s Hospital, we have really great clinics,” added Dr. Kanga. “In pediatric pulmonology, we now have allergists and immunologists, in addition to pulmonologists, so we have a multi-specialty team that all works together.”

“It was a group effort, down to the custodial staff. Everybody there was concerned about every child.” said Kim. “They really did save her life that night. She would not have made it. And if I had stayed home with her, Callie wouldn’t be here today.” 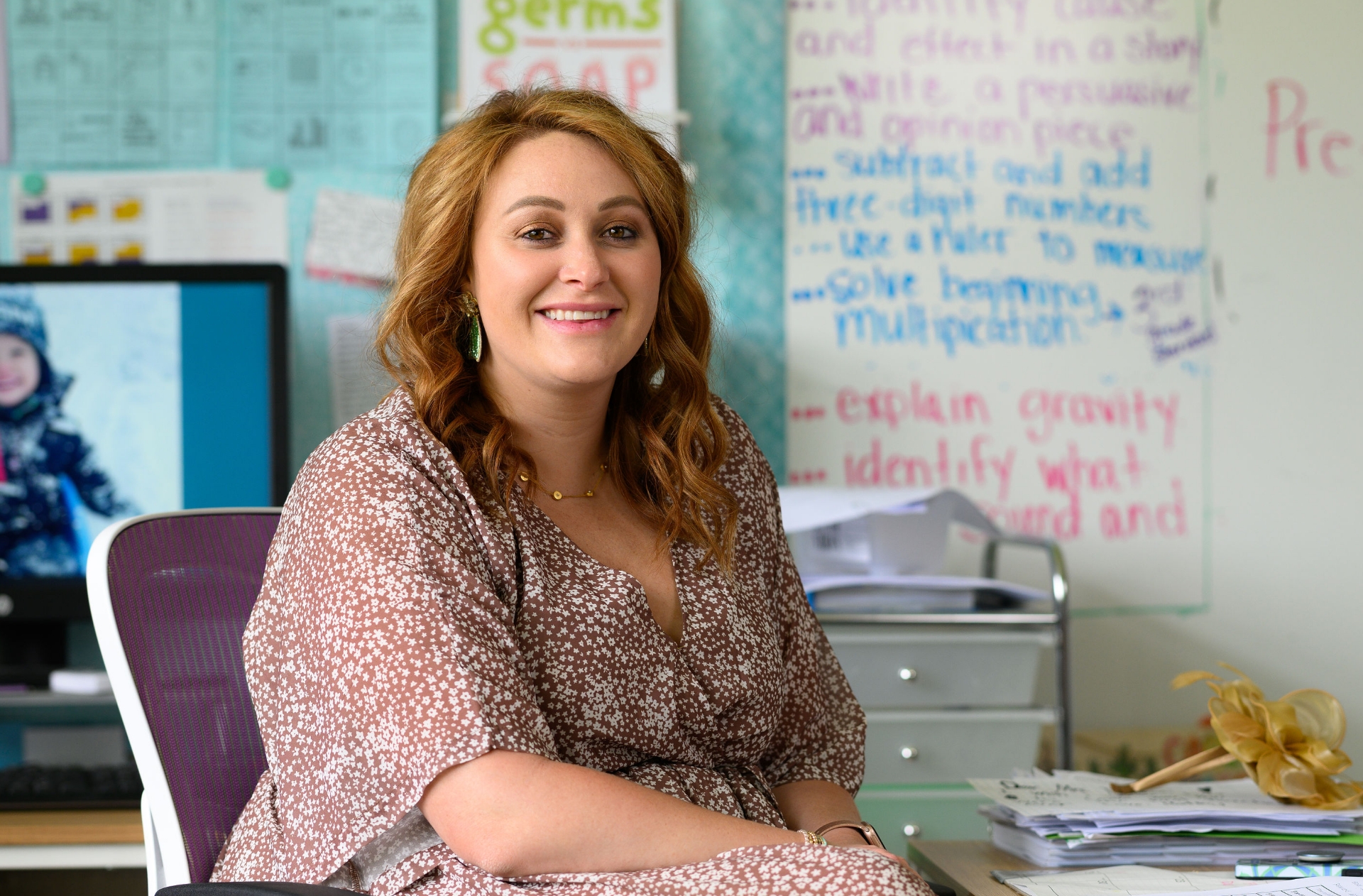 “With asthma, injuries and stigmas, I learned to really listen to myself,” said Callie. “I know my body better than anybody else.”