“My life changed in an instant.”

“I have a three-week-old daughter at home, it’s COVID, and I don’t want to bring her to the ER with me. But that’s just what I had to do. [The scan] showed I had a bowel obstruction. I had to have emergency surgery the next morning to remove my ascending colon. And it wasn’t until five days later, on September 16, that I got the call that it was actually Burkitt lymphoma.” 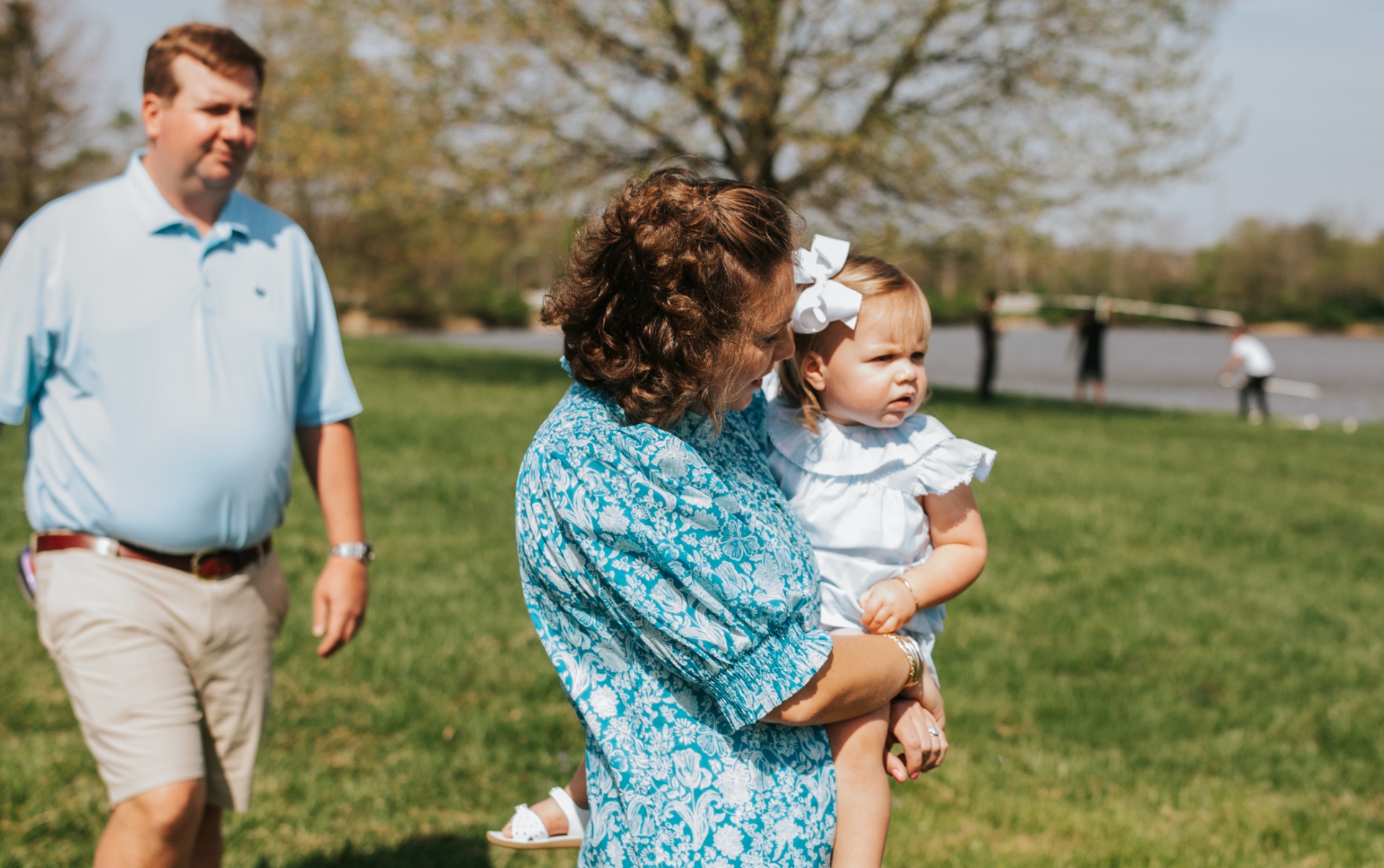 Anne Sydney Parrish first noticed the pain a day or two after delivering her second baby via C-section. It was late summer of 2020, and the then-33-year-old didn’t think too much of it. “We thought it was all just from surgery; I just had a major operation. I was discharged and went home,” she said. But even as she recovered from her C-section, the pain didn’t go away. “I thought it was maybe gas or heartburn, something like that.” 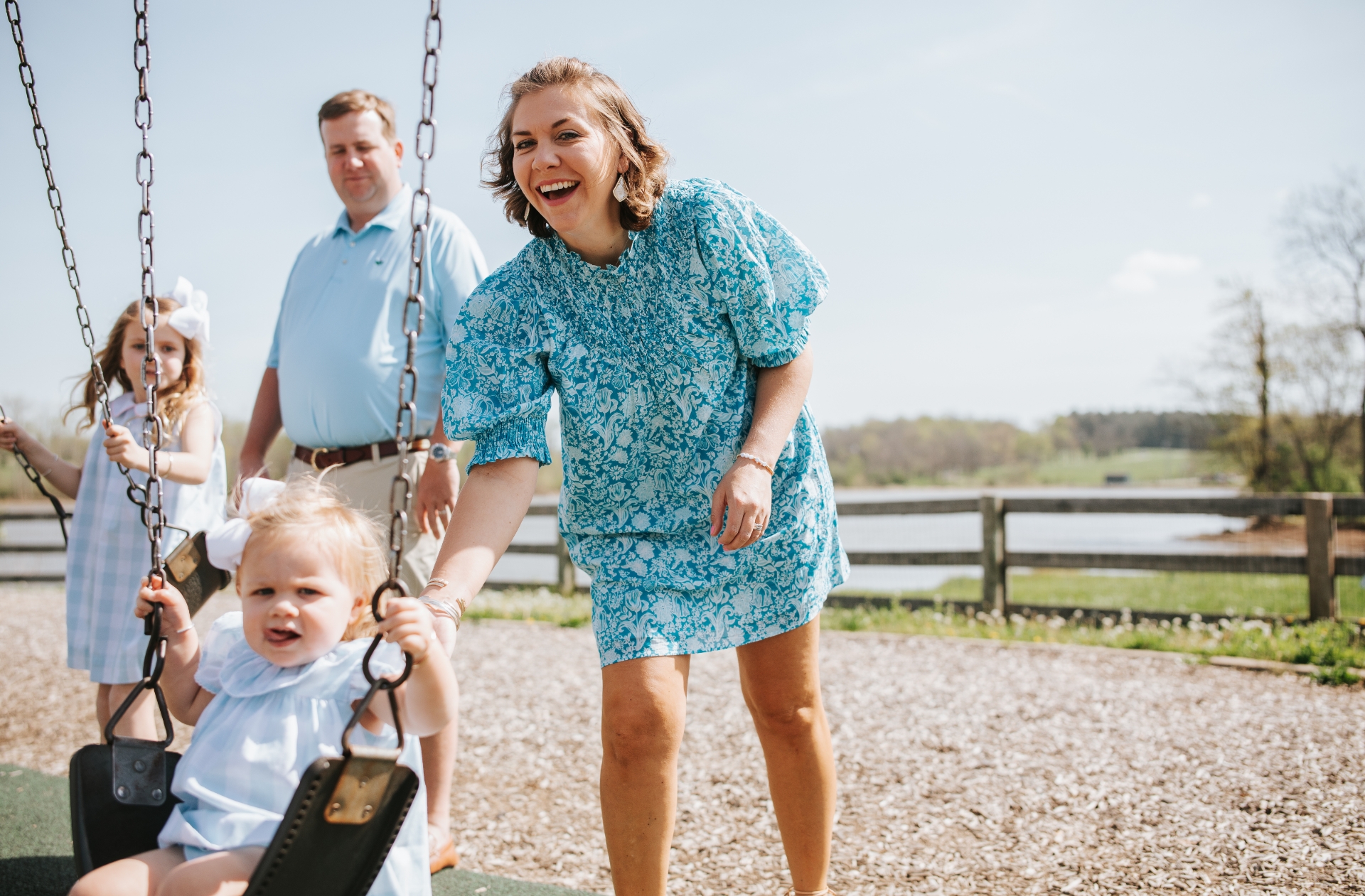 Anne Sydney’s family was an integral part of her support system after she gave birth and when she was diagnosed.

The pain continued for weeks. Over-the-counter medications didn’t help. An ultrasound of her gallbladder came back normal. But finally, Anne Sydney’s brother-in-law, an ER doctor, insisted she go to the emergency room for the CT scan that led to her cancer diagnosis.

Anne Sydney, a physician assistant, had heard of Burkitt lymphoma, but didn’t know much about it. “The first thing I do is go to Google, just like any normal patient would,” she said. “The first things you read are it’s rare and very aggressive. So, there I am, thinking I’m going to die.” 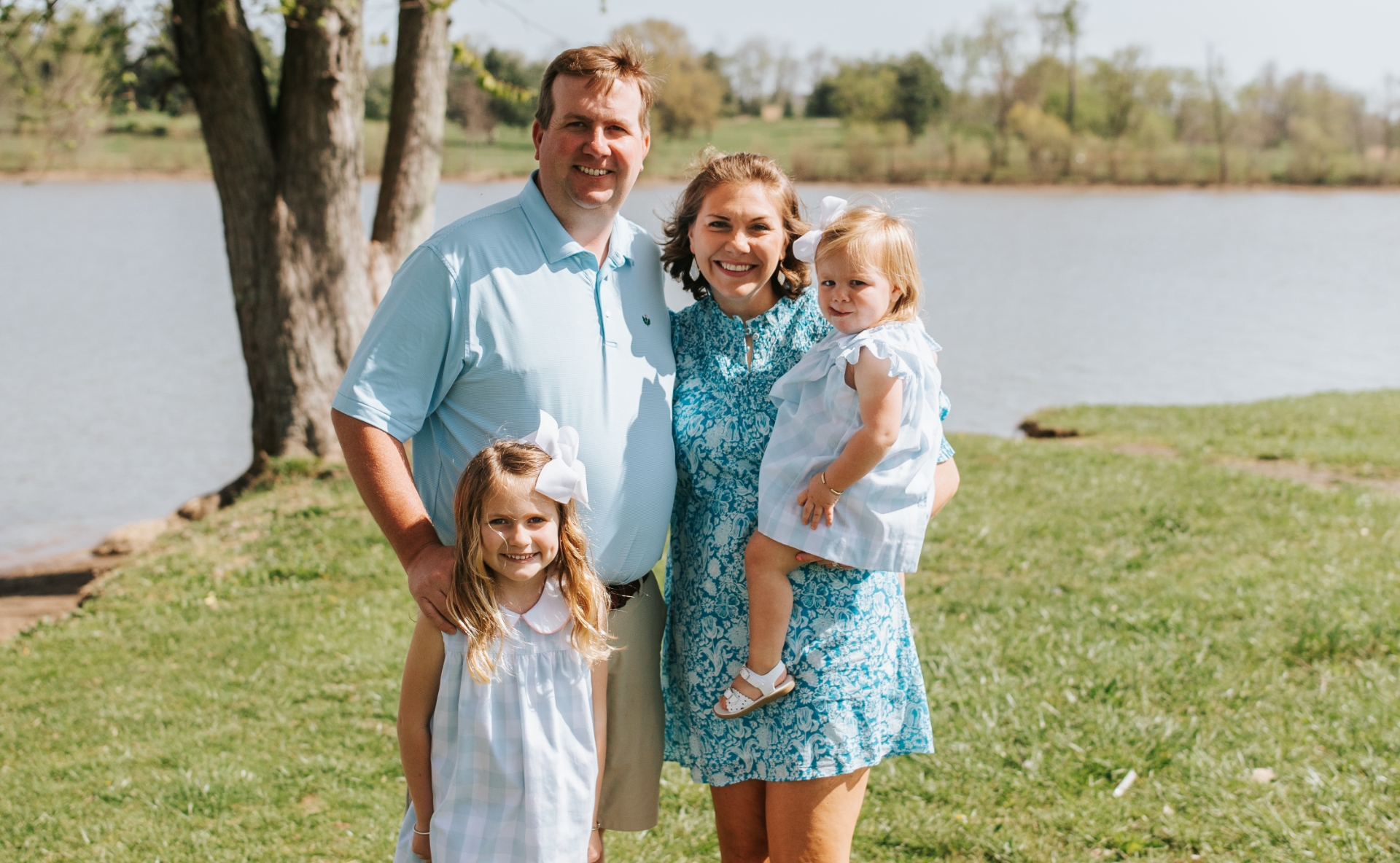 “I was thinking, ‘I’ve just got to get better for my family and my kids,’” said Anne Sydney.

Hours after her diagnosis, Anne Sydney and her husband were in an appointment at UK HealthCare’s Markey Cancer Center, developing a plan for treatment. “These tumors are known to double and triple in size in a matter of days,” she said. “They actually said I was stage four, which is so shocking to think that that could happen in a matter of a few weeks. But it was mostly in my abdomen and my pelvis, with a lot of lymph node involvement there. They thought it was in my lumbar spine, my right femur, my breasts, maybe up in my clavicle.” 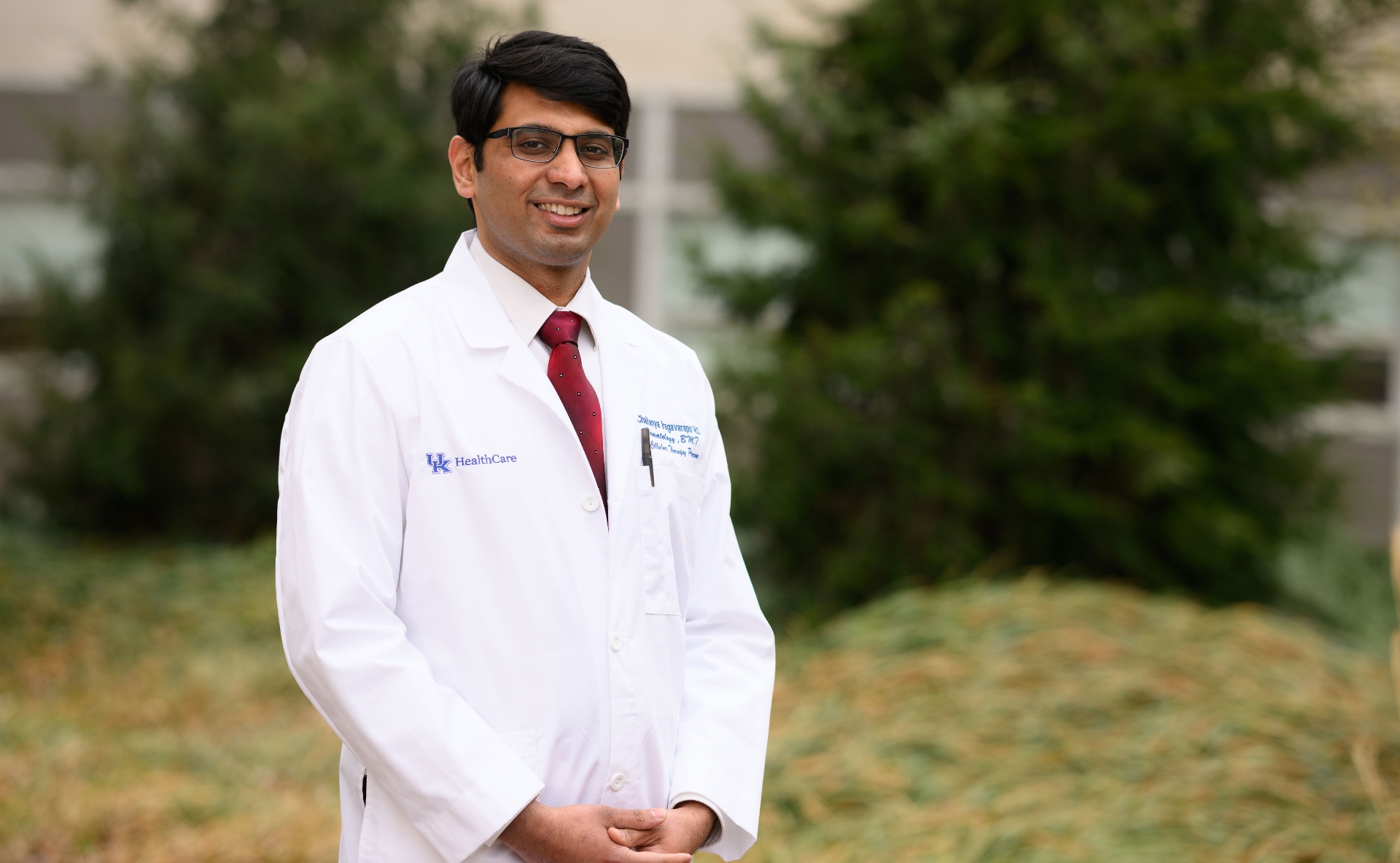 Dr. Chaitanya Iragavarapu has been part of Anne Sydney's larger care team throughout her cancer journey.

“Burkitt lymphoma typically presents with a single lesion in the abdomen, near the intestines,” said Dr. Chaitanya Iragavarapu, a member of the Hematology and Blood & Marrow Transplant team at UK HealthCare’s Markey Cancer Center, known to most of his patients as Dr. Chait. “If I had to hypothesize, I’d say that that’s probably how hers presented as well. But because she was also pregnant at that time, she may have minimized some of her symptoms from the cancer and attributed them to her pregnancy, perhaps. So, it spread outside of that one lesion in her abdomen.” 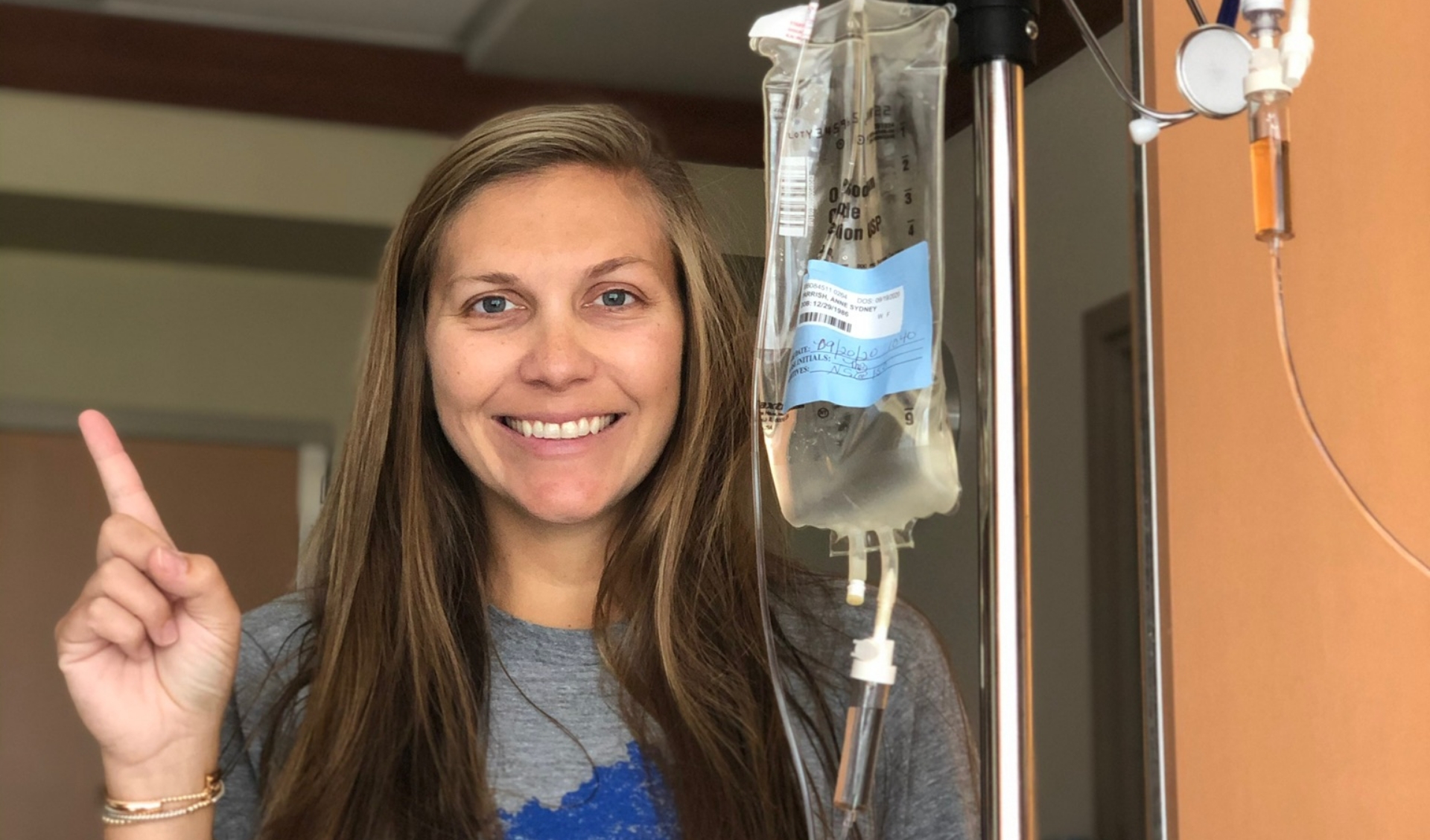 “It was where I needed to be,” said Anne Sydney. “Everything happens for a reason.”

While Burkitt lymphoma is extremely aggressive, it also has very high remission rates when treatment is started immediately. Four days after her diagnosis, Anne Sydney was admitted to UK HealthCare’s Albert B. Chandler Hospital, where she stayed for the next 15 days, including a stint in the ICU. In total, she underwent more than 570 hours of chemotherapy, in addition to transfusions, lumbar punctures, bone marrow biopsies, and near-constant CT scans, MRIs, and ultrasounds.

“I did not see my girls for two weeks,” said Anne Sydney. “I’d never been away from [them] that long before.”

“We moved very, very quickly in terms of trying to get her started on the right chemotherapy combination,” Dr. Chait said. “That essentially saved her life.”

But for the weeks she was in treatment, Anne Sydney was separated from her family. “My chemo regime required 96 hours of continuous infusions, and only one visitor was allowed at the hospital because of COVID,” she said. “I did not see my girls for weeks, which was hard.” Once she did return home, it was almost impossible to get out of bed, let alone parent a toddler and an infant the way she wanted to. 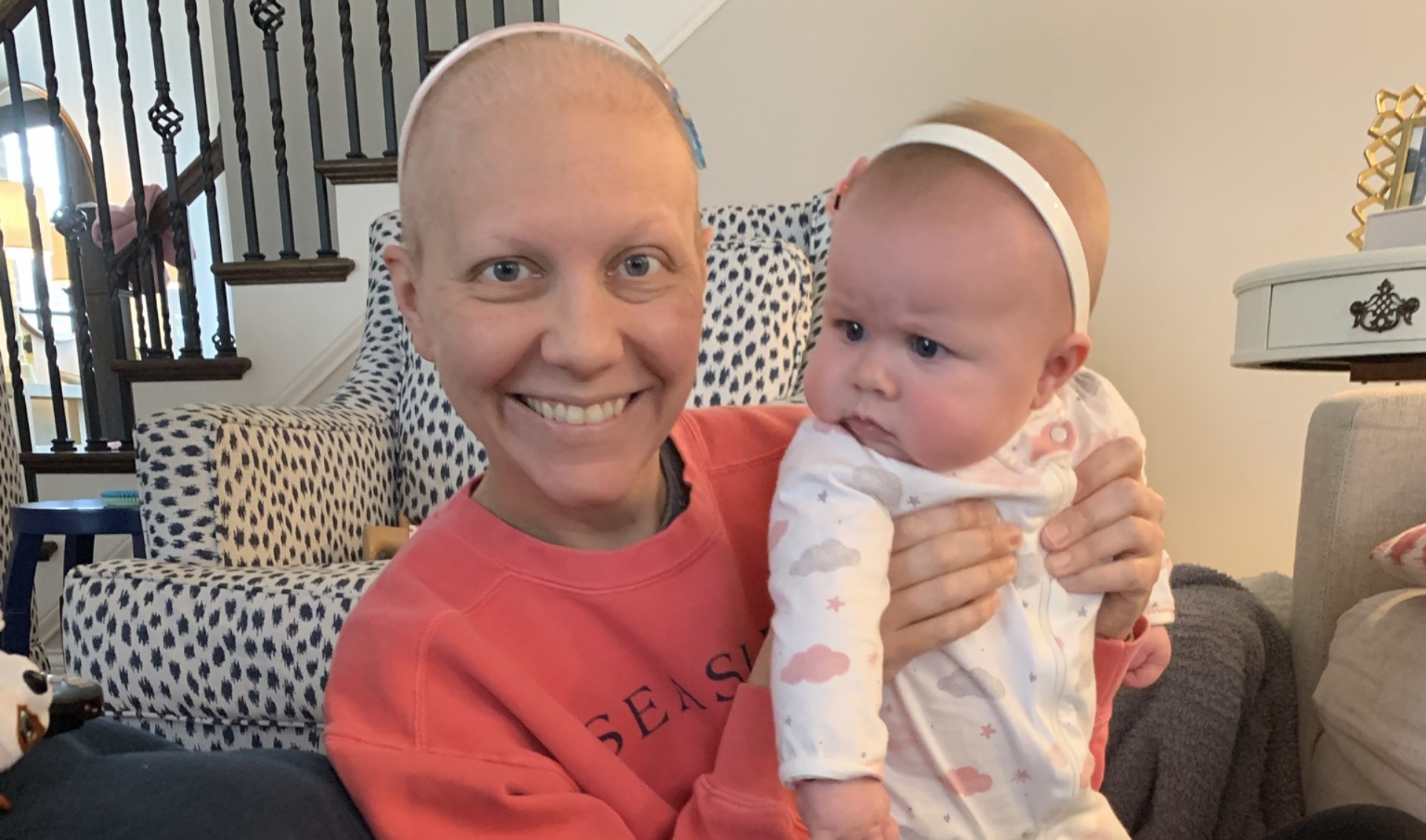 “I was worried she wouldn’t know who I was because I was so sick the first six months of her life,” said Anne Sydney.

“I’d had two surgeries, a C-section and then a colon resection, so I was swollen and distended and I was in a lot of pain,” said Anne Sydney. “I was too weak to really do anything—to put my daughter to bed, to get up the stairs, to lay with her. And with the baby, I just never really thought that she would know who I was because I was so sick for the first six months of her life. It was so difficult just wanting to do those things, but knowing that I really couldn’t, because the chemo made me so tired.” 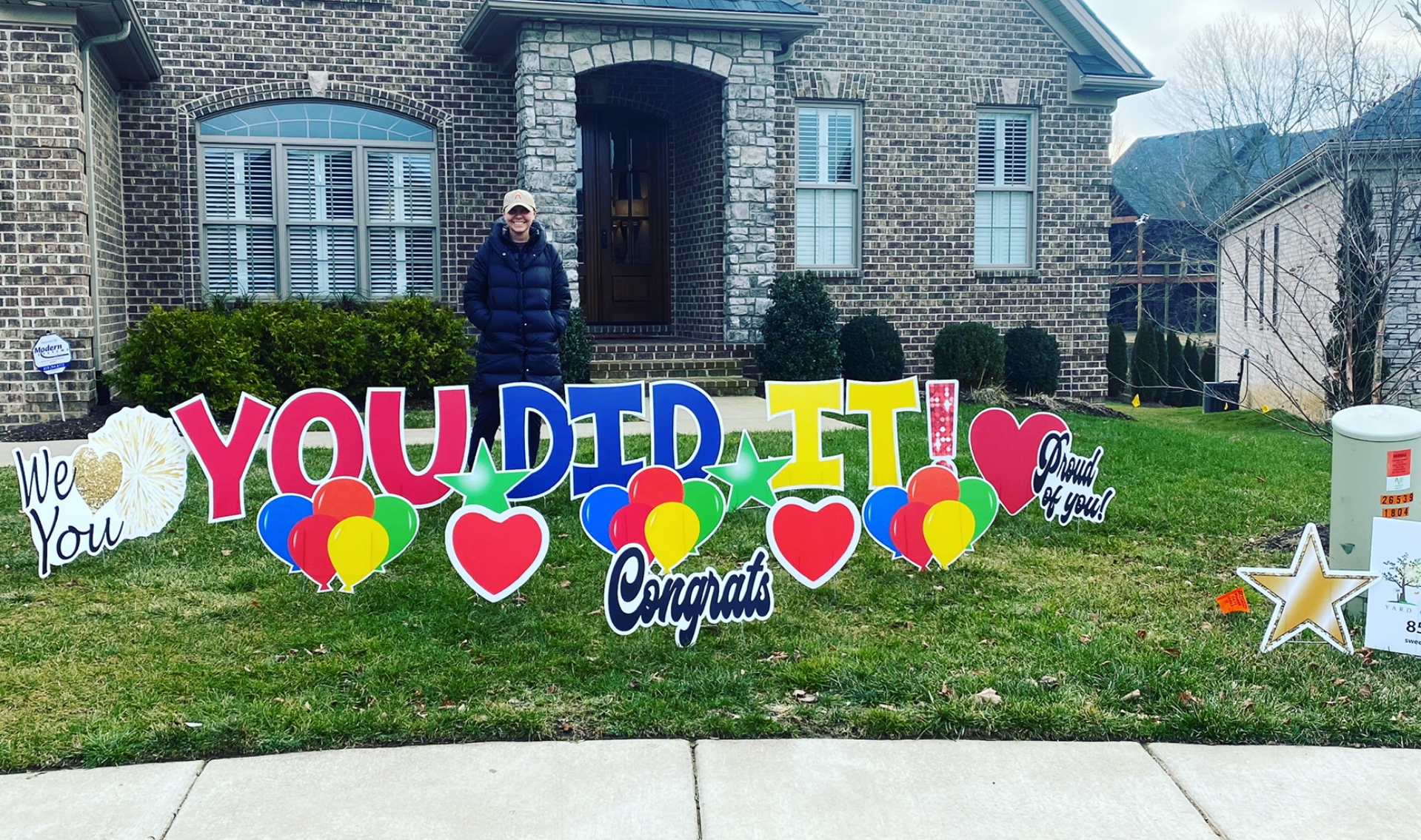 “It was amazing the treatment worked that well and that quickly,” said Anne Sydney.

But Anne Sydney remained focused on her ultimate goal: getting through chemotherapy and coming out healthy on the other side. She received her last treatment in January of 2021, and scans on February 3 showed that she was in remission. 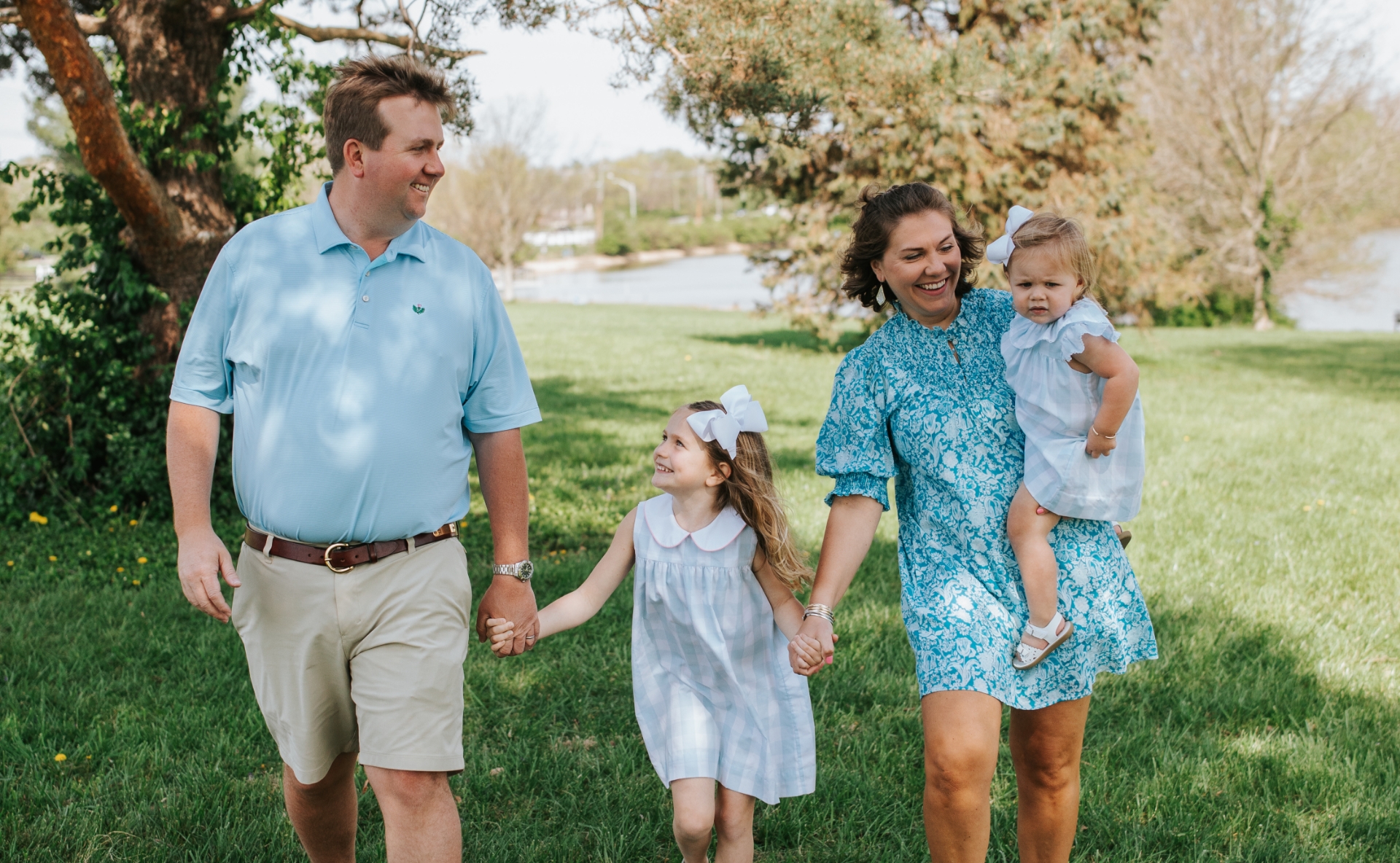 “You do the next thing, and you just keep moving,” said Anne Sydney.

“It was gone just as quickly as it came on, it felt like,” said Anne Sydney. “It was amazing that the treatment worked that well and that quickly. UK HealthCare is actually the only hospital in the area that would even treat my lymphoma, because it was so aggressive and required inpatient chemotherapy that [other hospitals in the area don’t offer]. There are so many people that drive hours to come to Markey Cancer Center, and I am thankful that they were here and my drive was 15 minutes.” 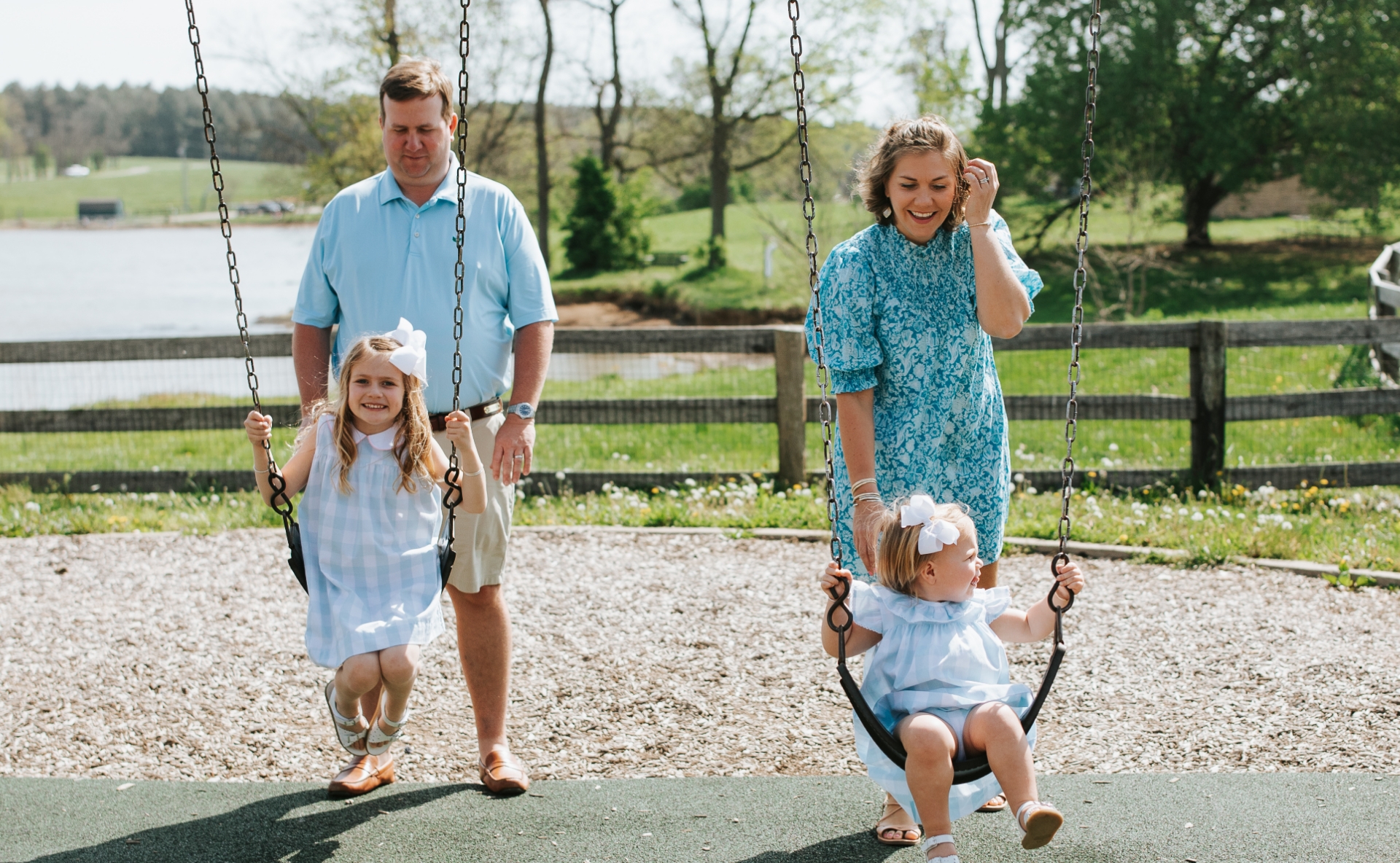 “[We’re] so blessed to have our kids,” said Anne Sydney.

“The true heroes for us in hematology are our inpatient bone marrow transplant unit with all of their staff, as well as our outpatient clinic staff at the Markey Hematology Practices,” said Dr. Chait. “They are exceptionally motivated, very compassionate human beings who just come in and make sure that folks who are in dire circumstances have hope and have the ability to get through their incredibly difficult treatment.” 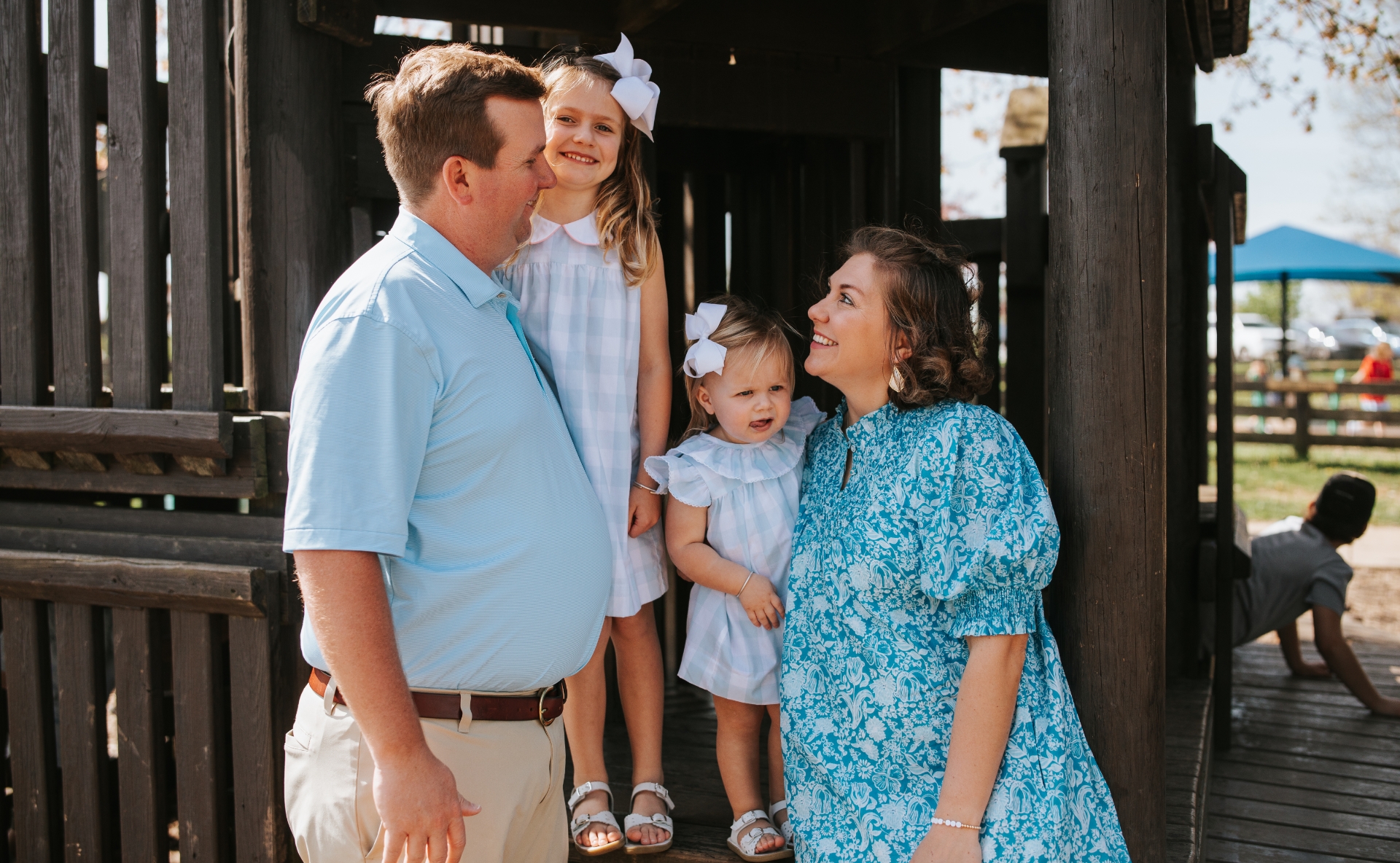 “[This experience] has made me appreciate my health and family even more,” said Anne Sydney.

“At the time, I didn’t realize how sick I really was. But now looking back on it, wow—that could have gone the other way at any moment,” said Anne Sydney. “I’m just not taking life for granted. My life literally changed in an instant. When I get frustrated with my kids, I just try to think, ‘Okay, this is not the end of the world, we can get past this.’ It’s easy to get caught up in little things and in everyday life, but I’m truly blessed.” 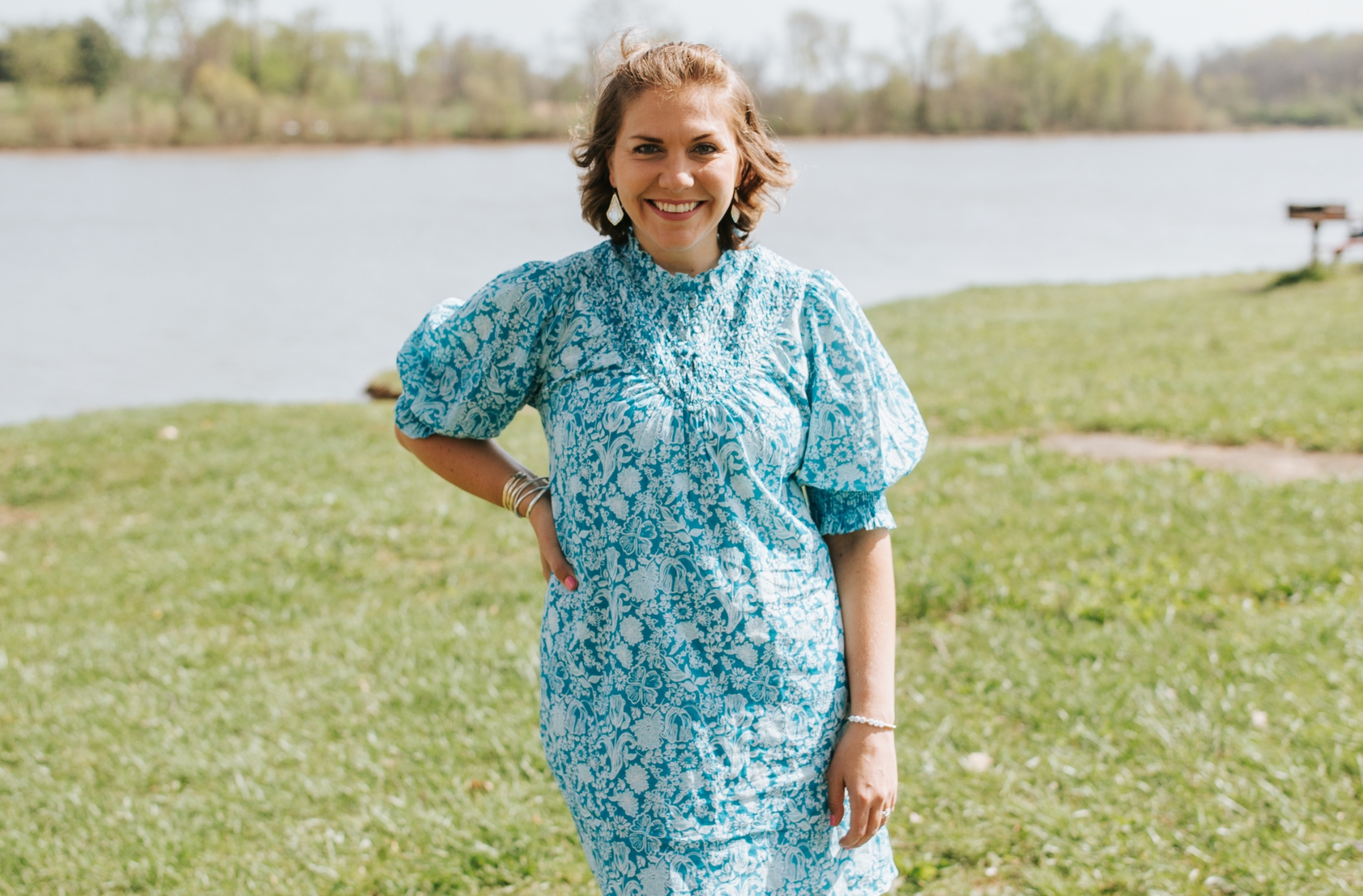 “You know your body better than anyone else,” said Anne Sydney. “If something doesn’t feel right, get it checked out.”

See how we care for patients like Anne Sydney

“I want to be on the other end.”Cancer, Primary Care