“He is so happy. He doesn’t cry and have tantrums. He’s just a very, very happy, very, very silly little boy.”

You’d never know that three-year-old Everett Polston spent more than one-third of his life in the NICU at UK HealthCare’s Kentucky Children’s Hospital—that he was born at just 23 weeks, weighing less than two pounds. Today, he’s running, jumping, climbing, and being a typical toddler. It’s a reality that seemed almost impossible when he was born. 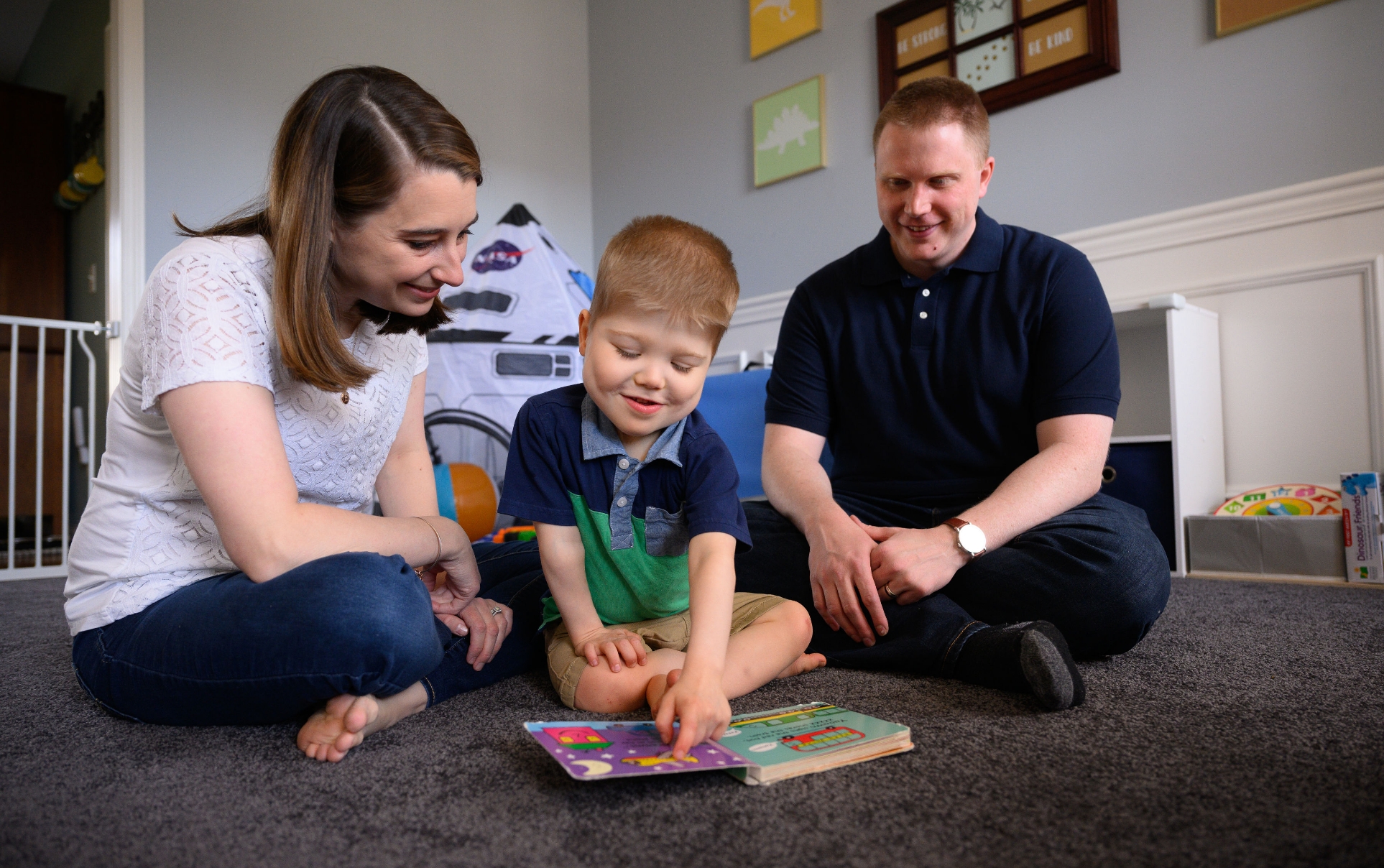 “He’s our only one, so he gets all our attention,” said Claire Polston.

Everett’s parents, Claire and Daniel, hadn’t even taken a birthing class or thought about packing a hospital bag when Claire went into preterm labor at 23 weeks. A high school chemistry teacher, Claire had experienced on-and-off back pain all day at school and started tracking her contractions. As her pain escalated, she and Daniel decided it was time to head into the hospital. 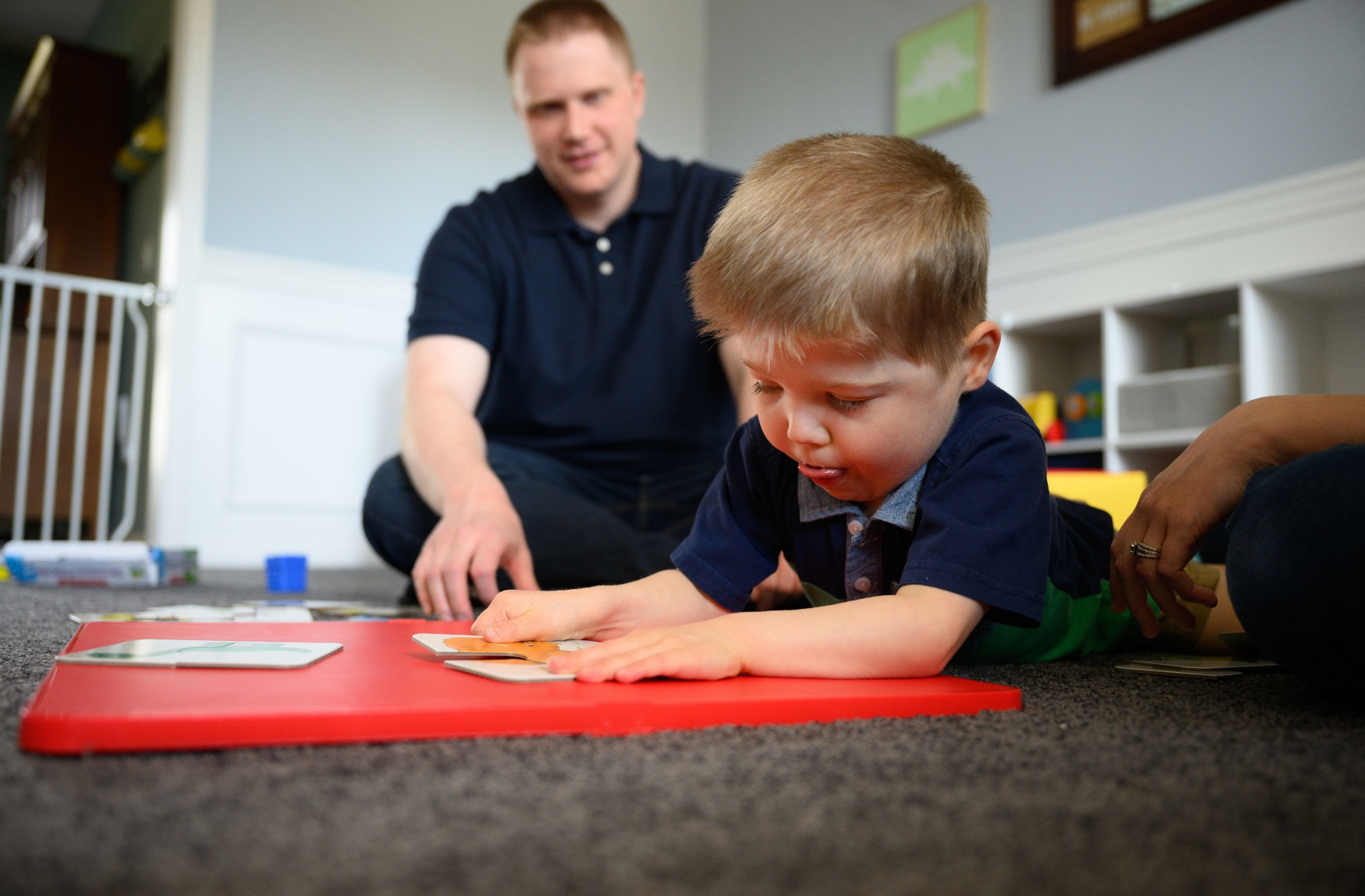 Once the Polstons arrived at the hospital where they’d planned to give birth, the OB team confirmed she was in labor. Claire was quickly moved down the street to UK HealthCare for immediate access to Kentucky Children’s Hospital’s Neonatal Intensive Care Unit (NICU), just in case her labor couldn’t be stopped. A magnesium sulfate drip slowed her contractions, but baby Everett had other plans. 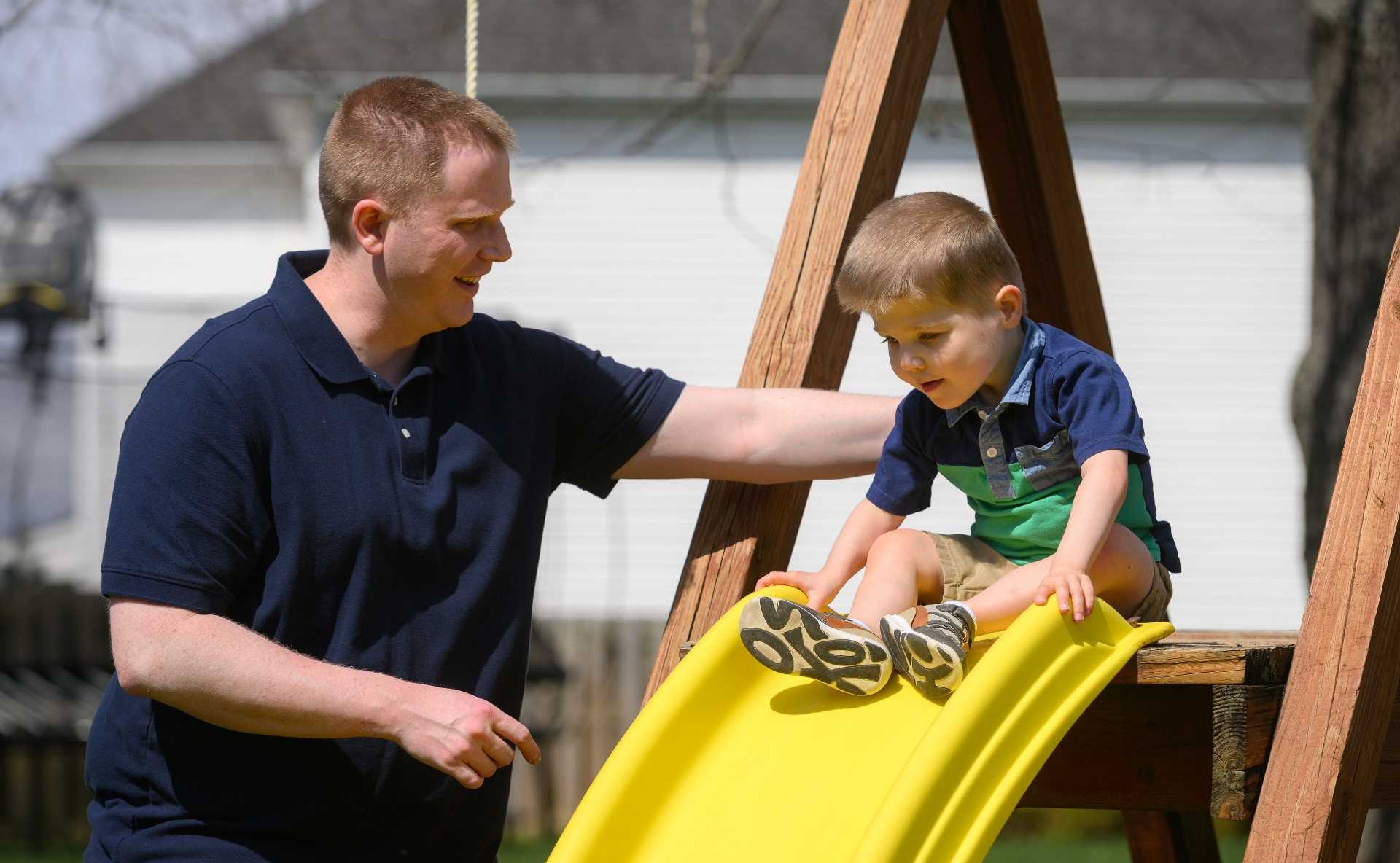 Everett is an active toddler who loves playing outside.

“I remember Everett let out just the faintest little cry,” said Claire. “Not even a full cry, but he made a noise.”

“In terms of planning for our first child, we hadn’t done so many of the normal things,” said Daniel.

Before Everett was rushed to the NICU, Daniel cut the umbilical cord. 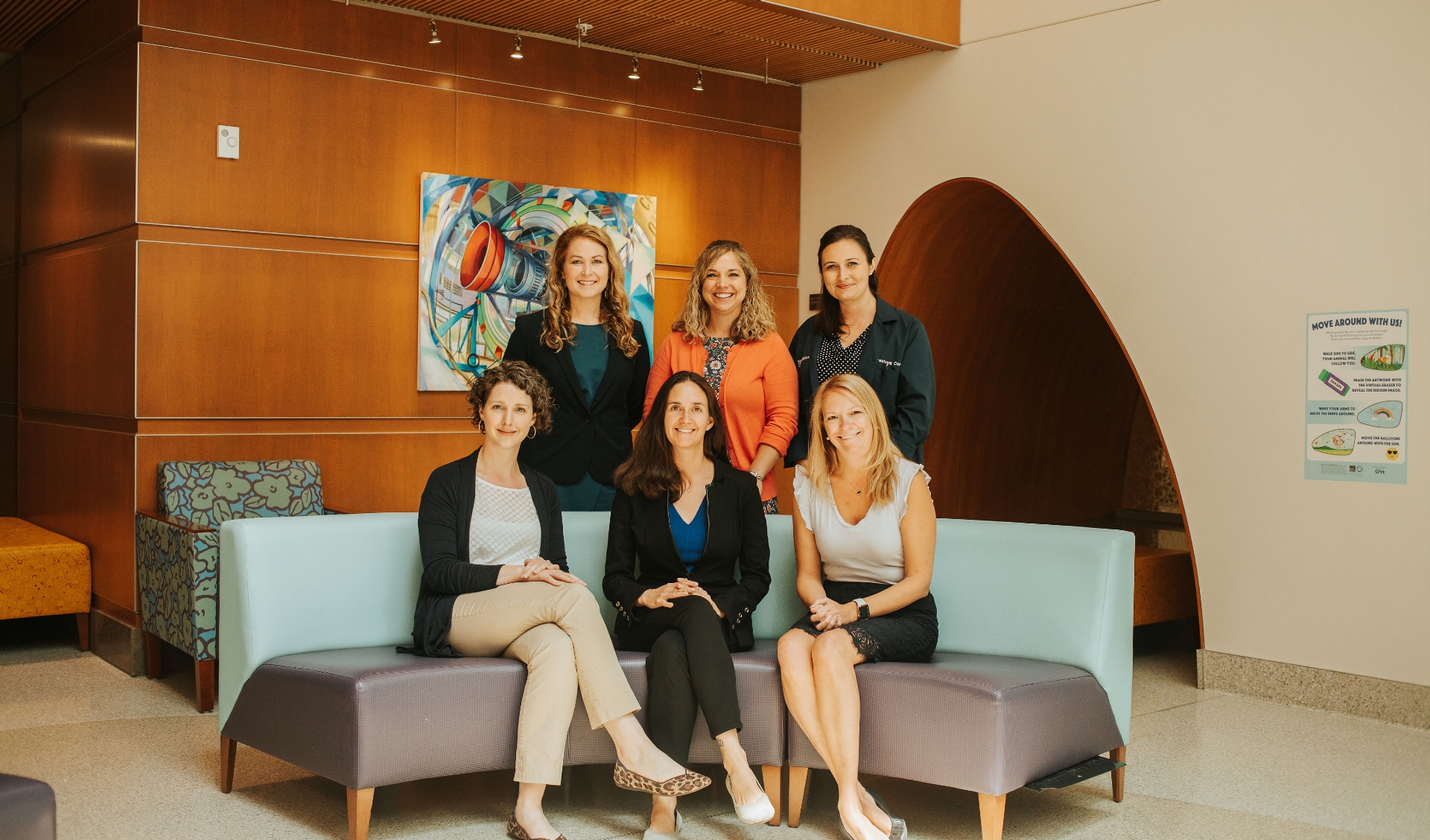 “We were in the right place,” said Daniel. “I took comfort knowing that the [Pediatric Advanced Care] team was ready.”

Claire and Daniel were briefed on Everett’s care plan, and slowly started learning about the long NICU journey ahead of them. The Polstons found immediate support from their medical teams, including Adrienne Johnston, a nurse practitioner with the Pediatric Advanced Care Team (PACT).

“We help to bridge that understanding, to make sure we can talk to families about what all these machines mean and what they’re doing for the baby,” said Adrienne. “We build that relationship to be there for parents with the ups and downs of the NICU.” 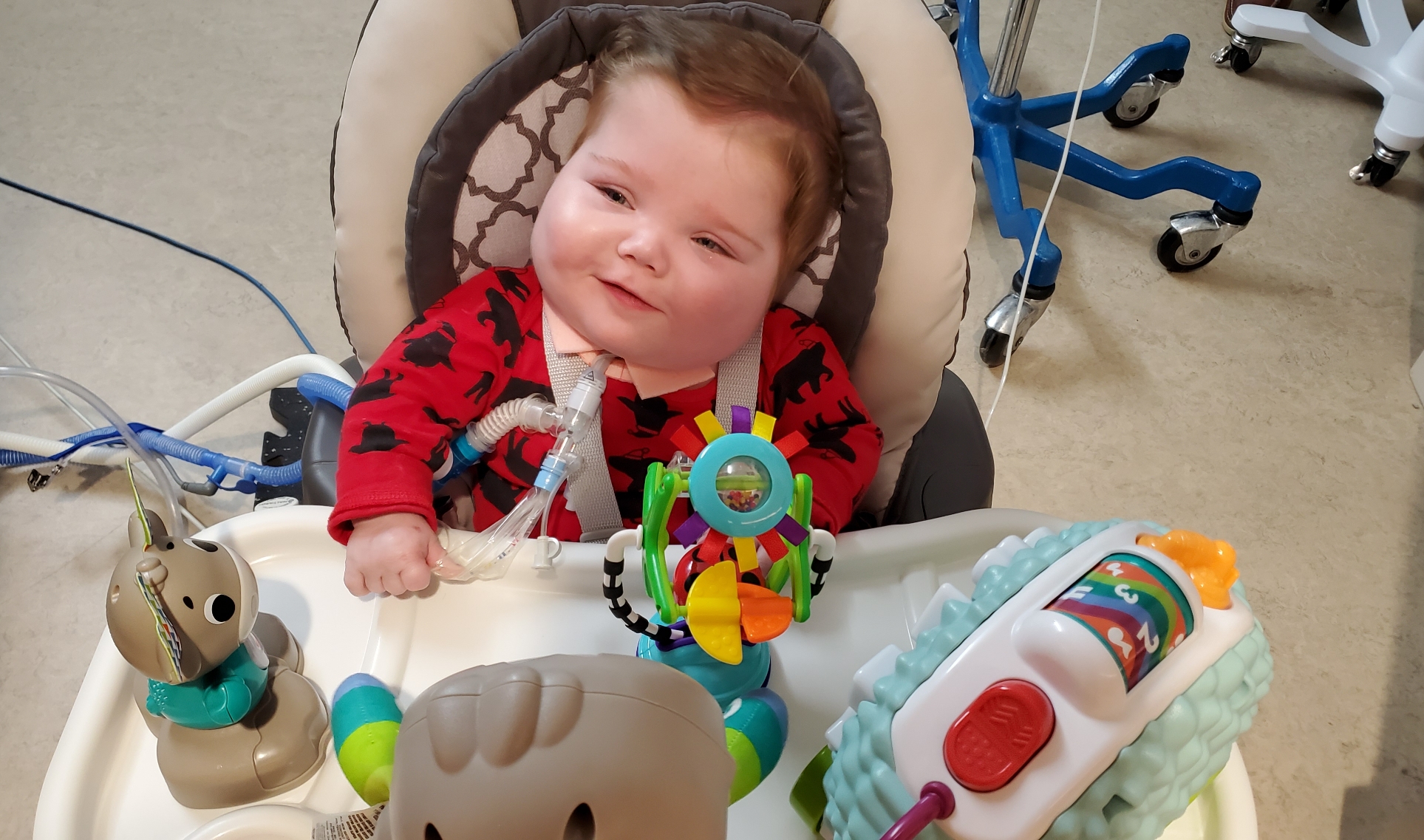 “He’s started to show us what he likes, like when he wants to be in his chair,” said Claire.

Due to Everett’s prematurity, he was intubated and put on a ventilator right away. At two weeks old, he experienced a complication common in preterm babies: a hole in his intestines and a PDA—a hole in his heart—which required surgery. Everett came through it all and gained strength for his next hurdle: severe pulmonary hypertension at eight weeks old. 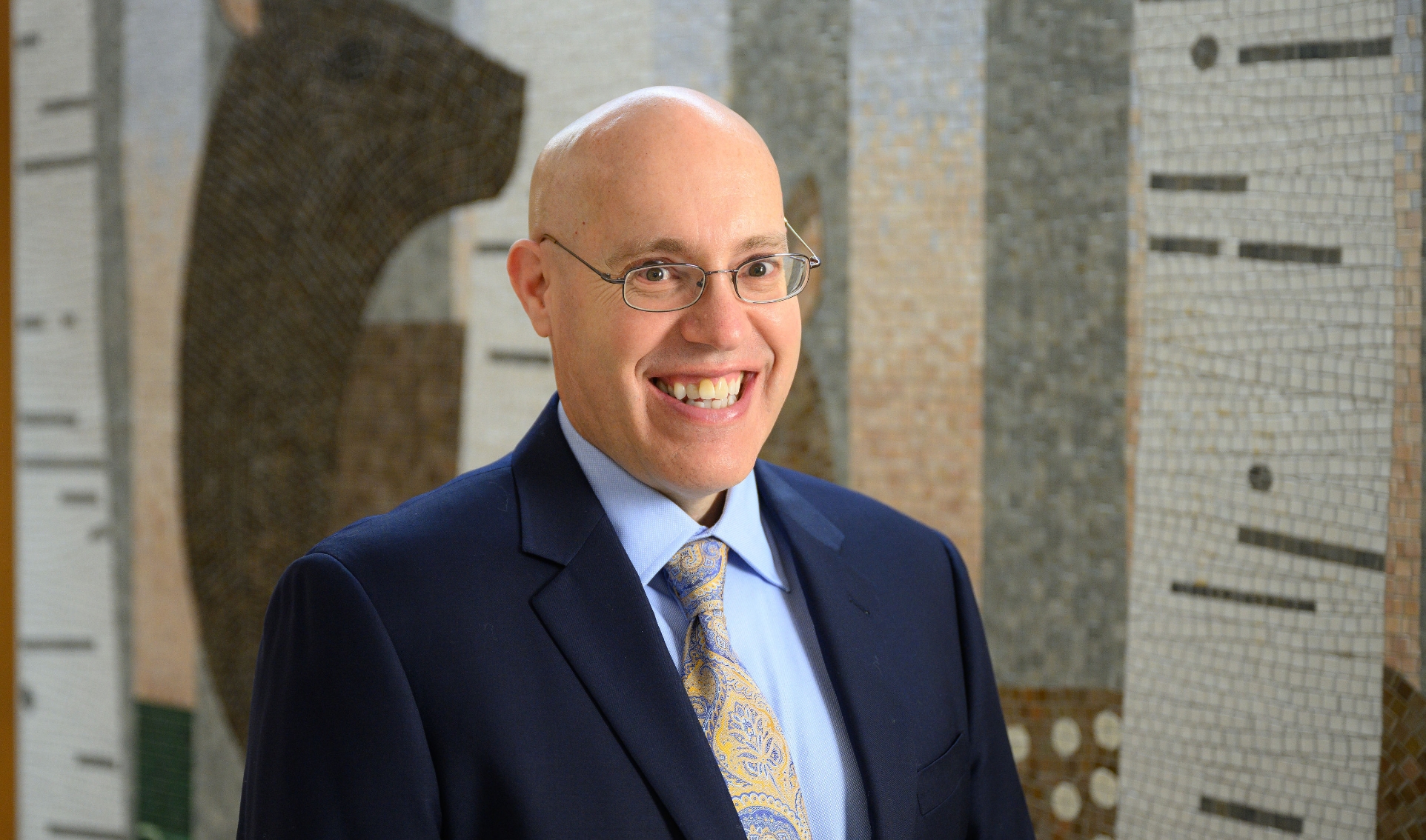 “We were able to get Everett through that episode, but it took a lot,” said Dr. Hubie Ballard, Associate Professor of Pediatrics and neonatologist at Kentucky Children’s Hospital. “He was on blood pressure medications and completely sedated all the time. He was as sick as you could be and still survive.” 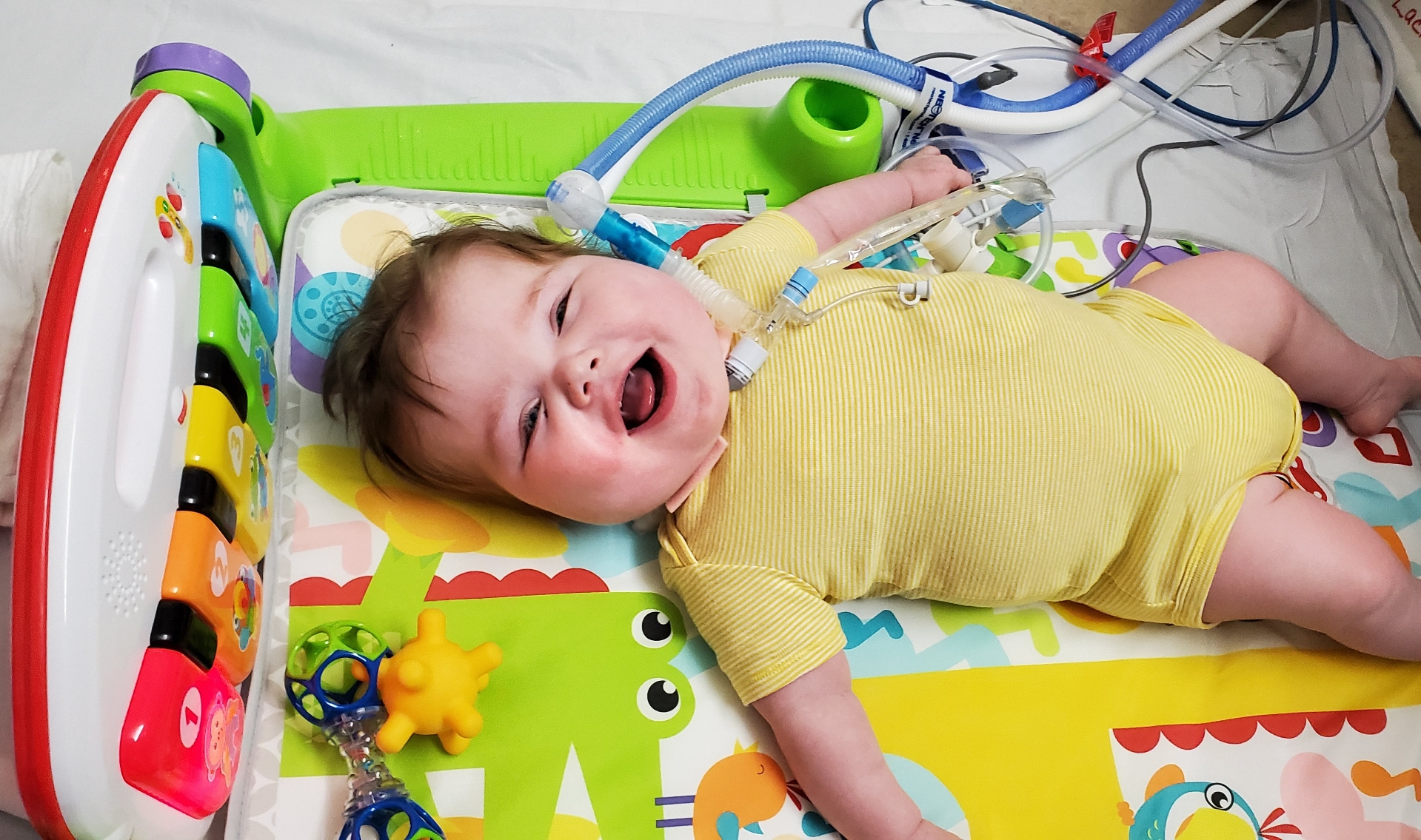 Even when he was in the hospital, Everett had a cheery disposition.

As Everett slowly kept growing and improving, his team suggested placing a tracheostomy tube. While he would still be on a ventilator, a trach would move the vent from his mouth down into his neck, allowing him to come off of the sedatives and be more awake, alert, and interactive.

“The team talked to us about developmental care and how for him, the trach likely wouldn’t be a lifetime thing,” said Claire. “But it would allow him to start working on some of the normal baby things.” 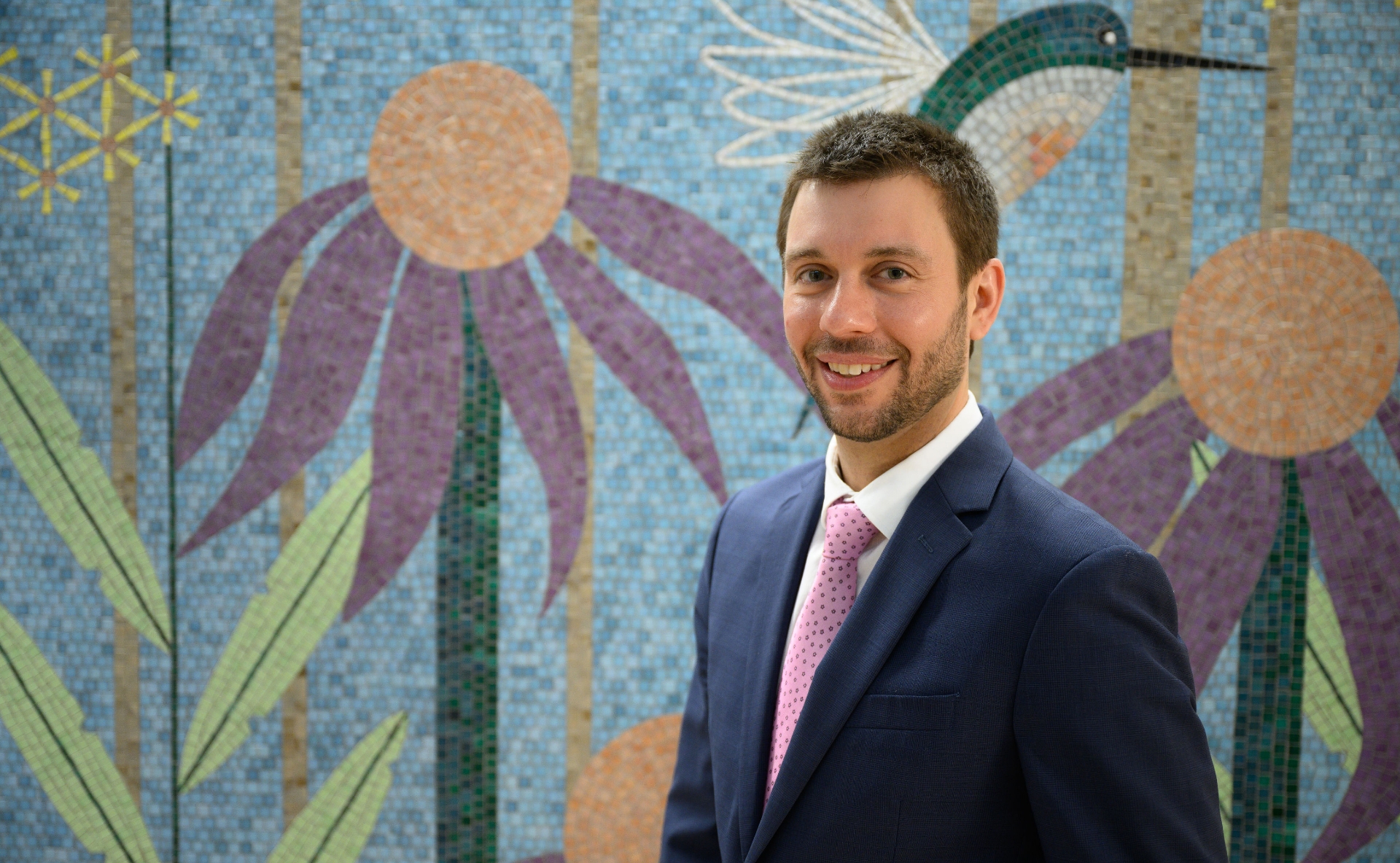 “His parents are the real heroes in this situation,” said Dr. Kenneth Iverson. “[They’re] so involved with his health care.”

Dr. Kenneth Iverson, Pediatric Otolaryngologist at Kentucky Children’s Hospital, placed the trach for Everett. He acknowledges many parents—including the Polstons—are hesitant to have a trach placed for their child. But once they learned of the benefits, Dr. Iverson had the Polstons’ full support. 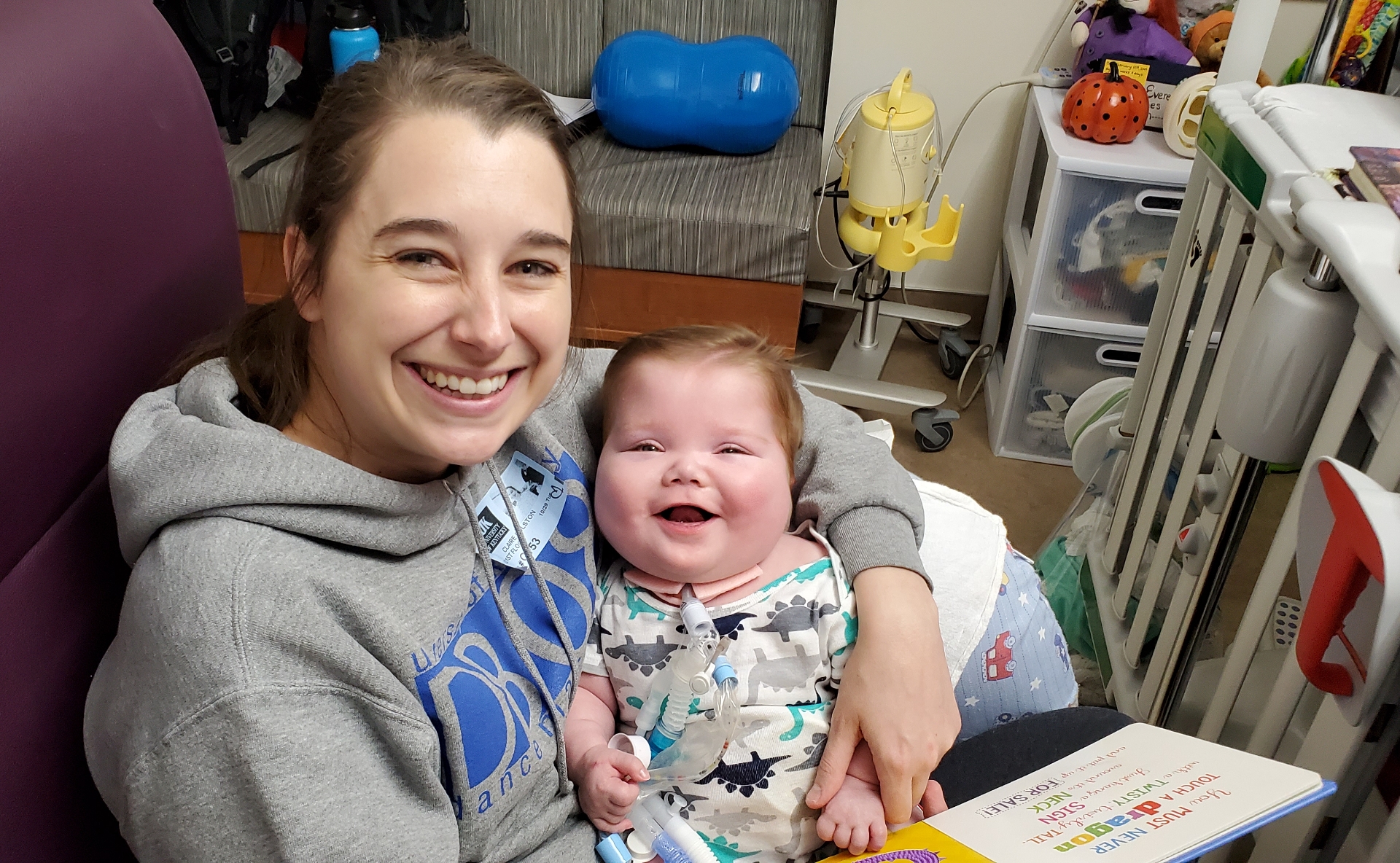 “One thing I tell folks in this situation is, ‘The day I put a trach in is the day I look at trying to get it out someday,’” said Dr. Iverson. “In Everett’s case, we wanted to get him home, get him breathing, get him developing, interacting with his family more—get him healthy so when he grows and no longer needs that support for his lungs, the trach can come out.”

The trach helped Everett keep growing and developing. He celebrated his first birthday with a space-themed party in the NICU. 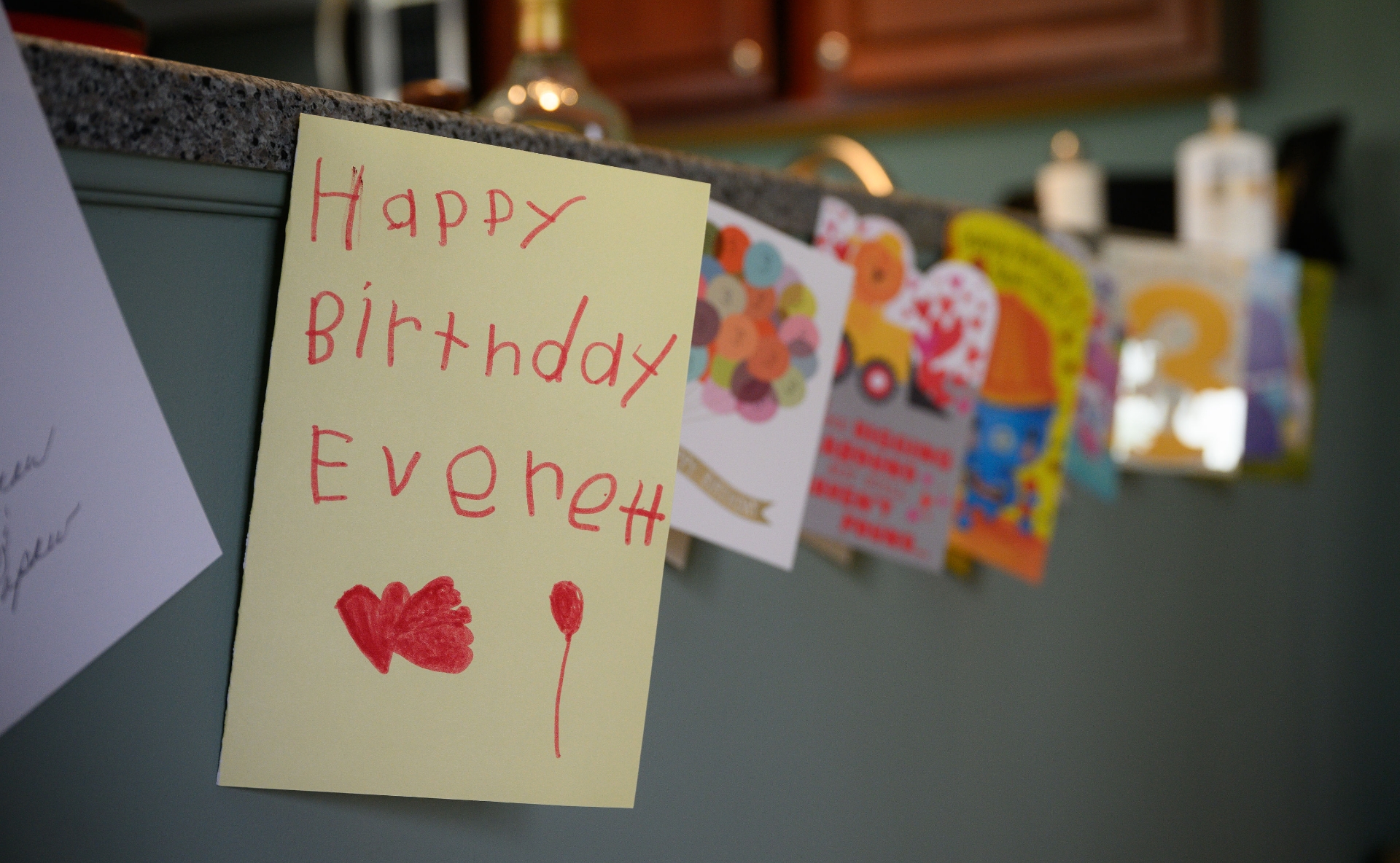 “Child Life helped us [with the party],” said Claire. “It was perfect, it really was.”

“Once we realized we were going to be there for his birthday, we just leaned into it,” said Claire. “I bought birthday party invitations and gave them to all his primary nurses and our parents. We bought cupcakes and a little smash cake for him. We all sang happy birthday to him—I bet there were 40 staff members there singing.” 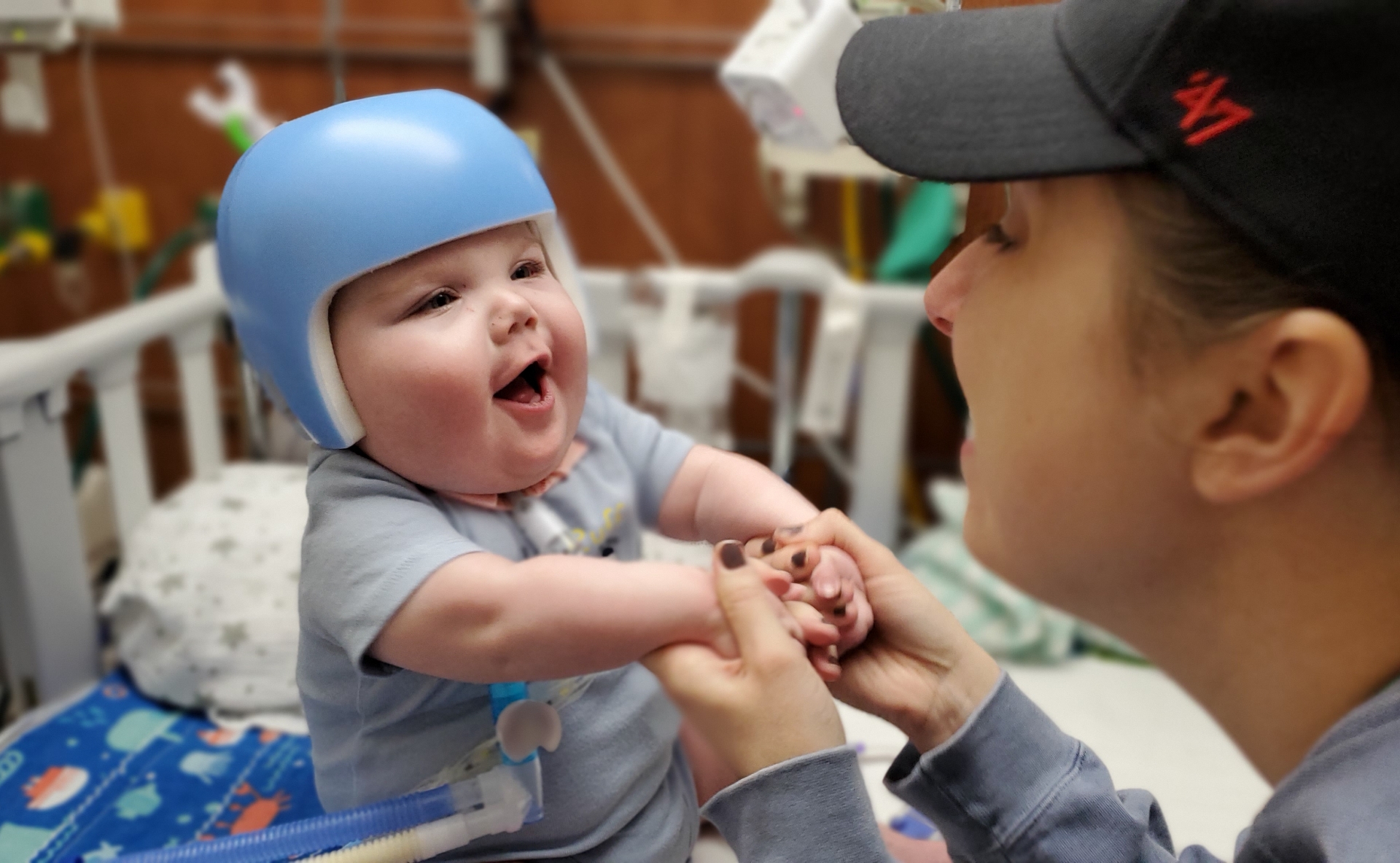 “He was hitting all the typical NICU milestones,” said Claire. “They’re a big deal.”

The Polstons and their team celebrated every one of Everett’s milestones. When they weren’t by his bedside, they were preparing for his arrival home in March of 2020, when he was 13 months old. He arrived home with his trach, a ventilator, and a G-tube to help him eat. It would be another year before he came off the vent full-time, in the spring of 2021. That July, Dr. Iverson removed his trach, and Everett quickly found his voice. 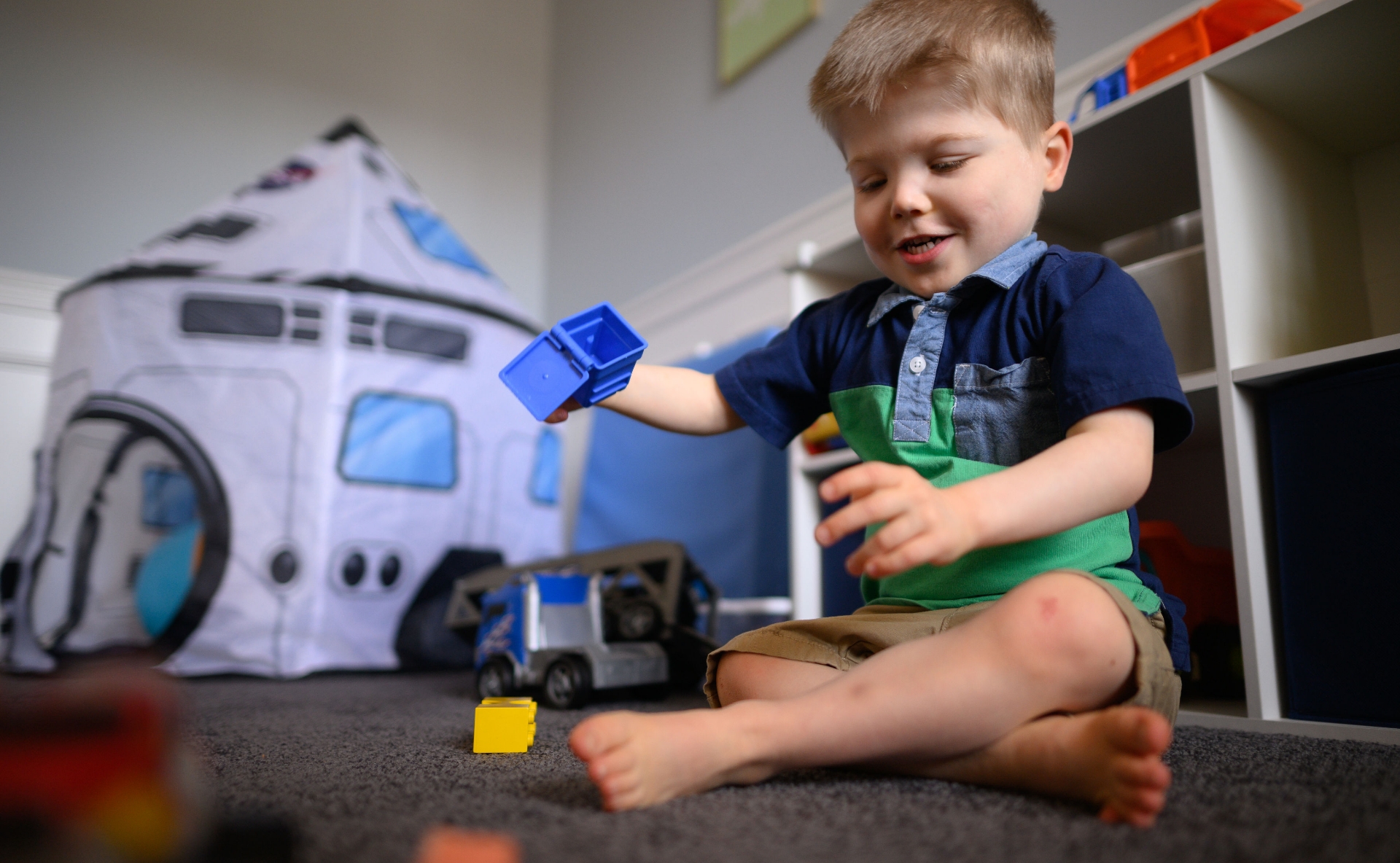 “Now he gets to start working on normal [kid] things,” said Claire.

“He’s the happiest little guy,” said Daniel. “Even when he was in the hospital, he enjoyed being around people. As much as he is dependent on so many people in his life, he’s learned to play independently and has fun doing that. It’s really cool to see him develop and change as he’s grown.” 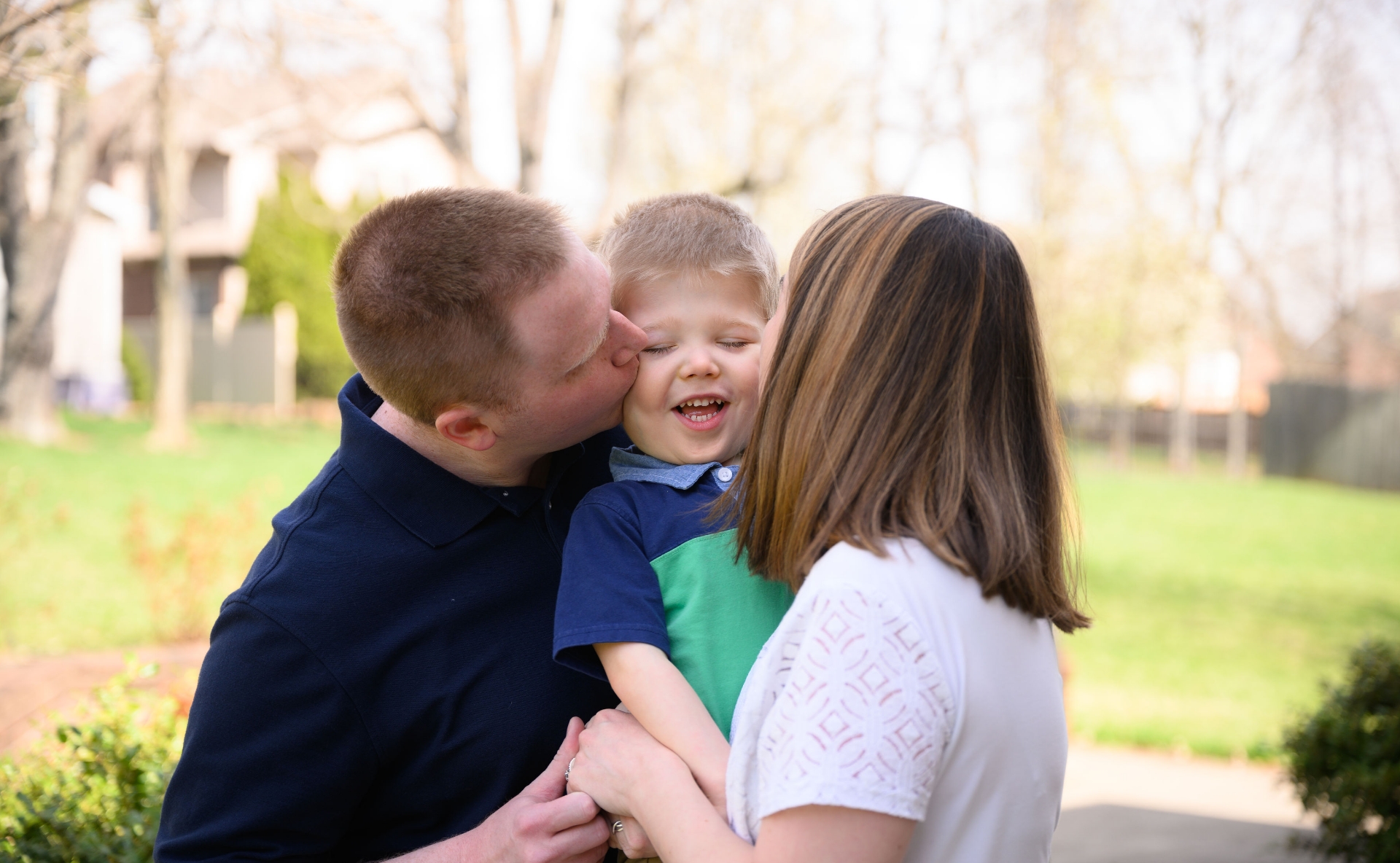 “You learn to celebrate the little things,” said Claire.

“The NICU is a place that you hope you never have to be, but there’s some sense of magic down there,” said Claire. “Between the doctors working with the patients and with their families and the nurses taking care of the patients and their families. Obviously the baby’s medical needs come first, but there’s so much care that goes beyond that. The NICU is a very, very special place and we want Everett to know about it. We plan to keep him connected there because it was such a huge part of his life.” 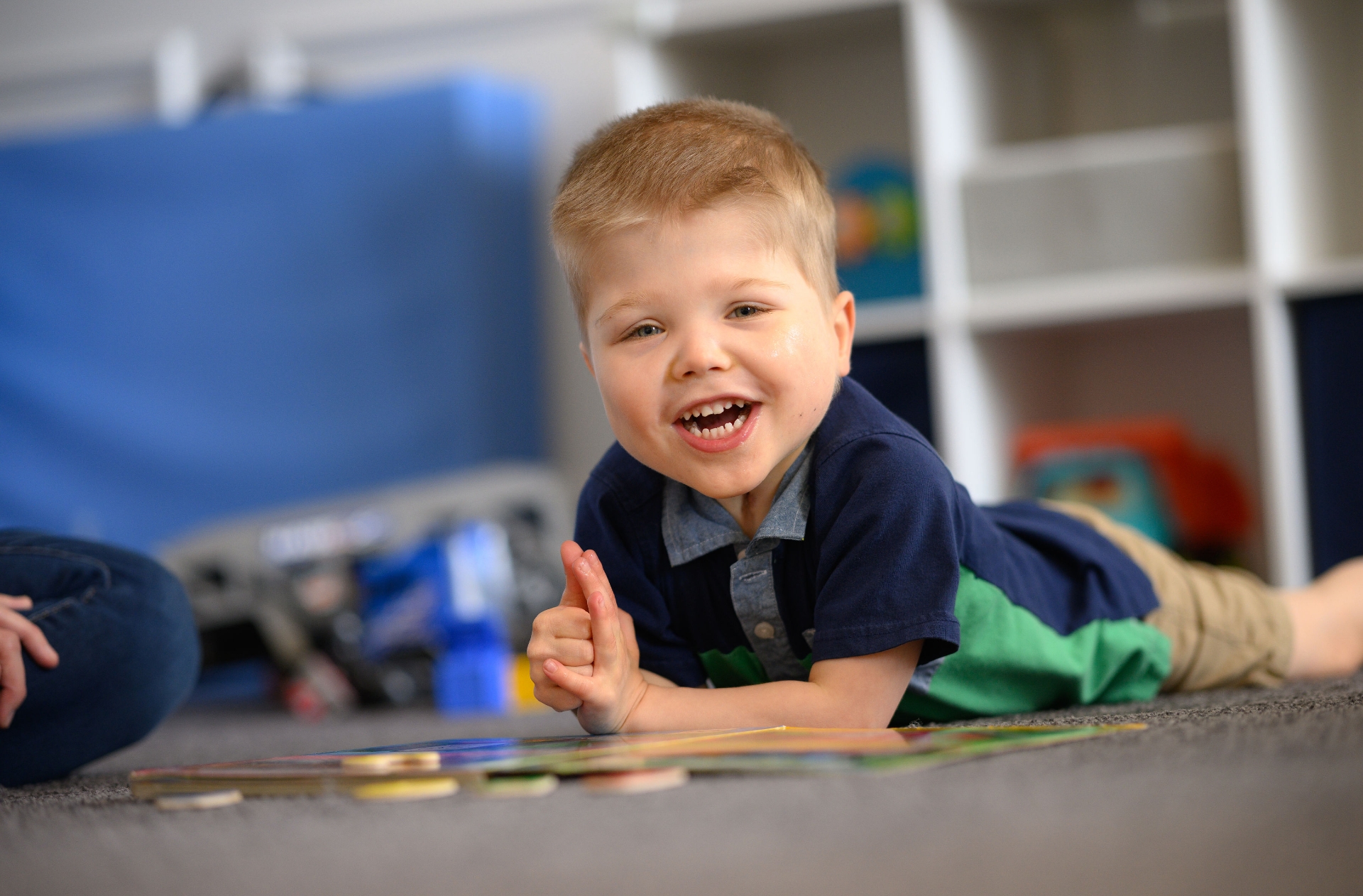 “He’s happy,” said Claire. “That’s really the best way I can describe him.”

READ MORE
“As sick as you could be and still survive.”2022-05-242022-05-25https://proof.ukhealthcare.com/wp-content/uploads/2019/04/ukhc-logo-white.pngWe Are Proof | UK HealthCarehttps://proof.ukhealthcare.com/wp-content/uploads/2022/05/everett-polston-feature.jpg200px200px
Contact
Follow Us
© University of Kentucky, Lexington, Kentucky, USA | An Equal Opportunity University | Interpreter Services | Notice of Non-Discrimination | Sitemap | Privacy Policy

The Mysterious Case of the Wooden SpoonEmergency Services, Pediatric Services

“My life changed in an instant.”Cancer, Moms