“I felt it move, but I brushed it off and took a few days off. I didn’t even mention it to the trainers because after three days of not stunting, it felt fine again. I never thought it was a serious injury at that point. It was hurting but I didn’t want to be out, so I just kept pushing through it. It wasn’t terrible.” 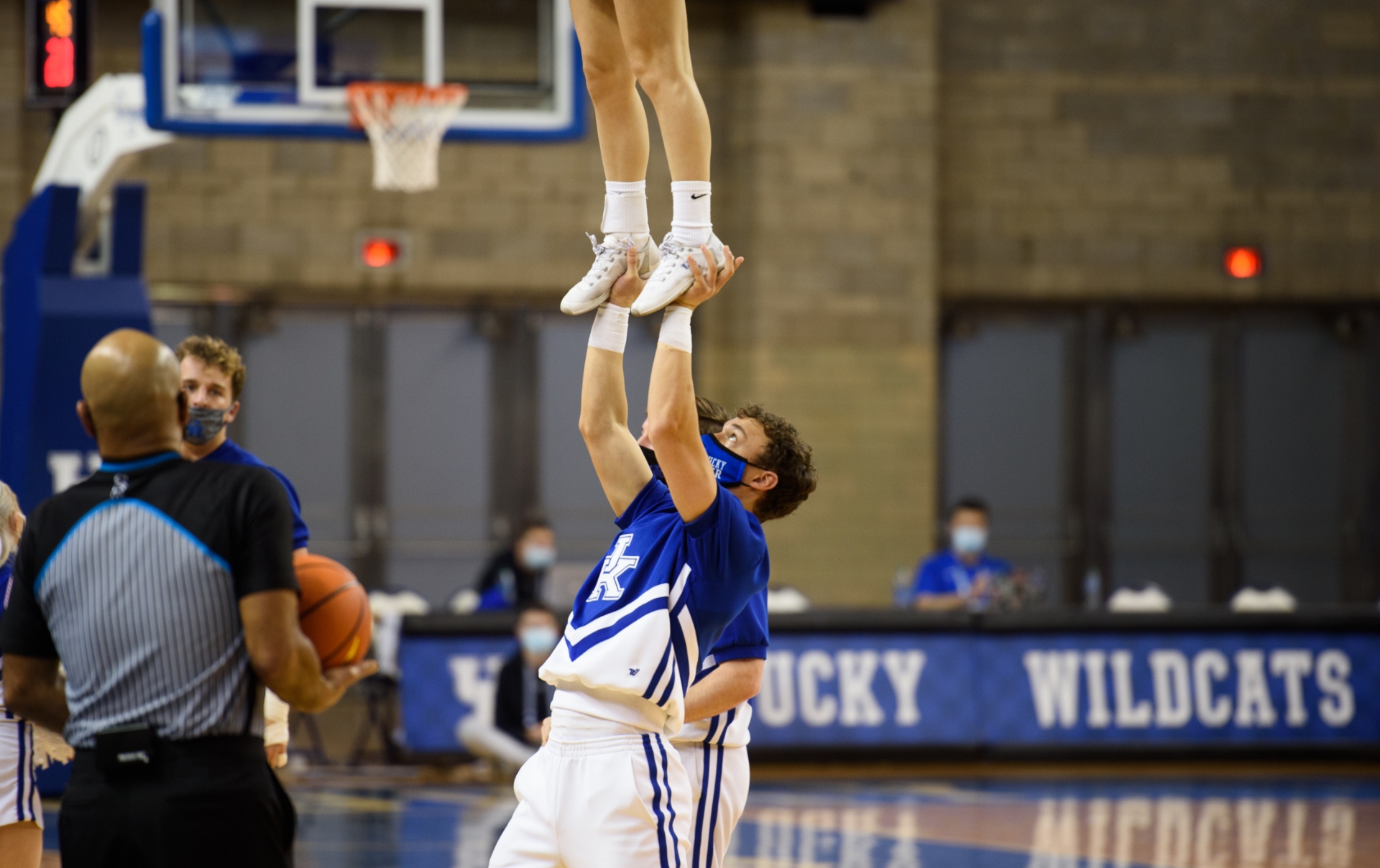 UK’s cheer program has an elite legacy, with 24 national titles.

20-year-old Travis Johnson has been cheerleading since he was young, following in the footsteps of his older sister. After he joined UK’s championship-level cheer team in college, he worked hard to keep his body in peak condition—until he dislocated his shoulder. 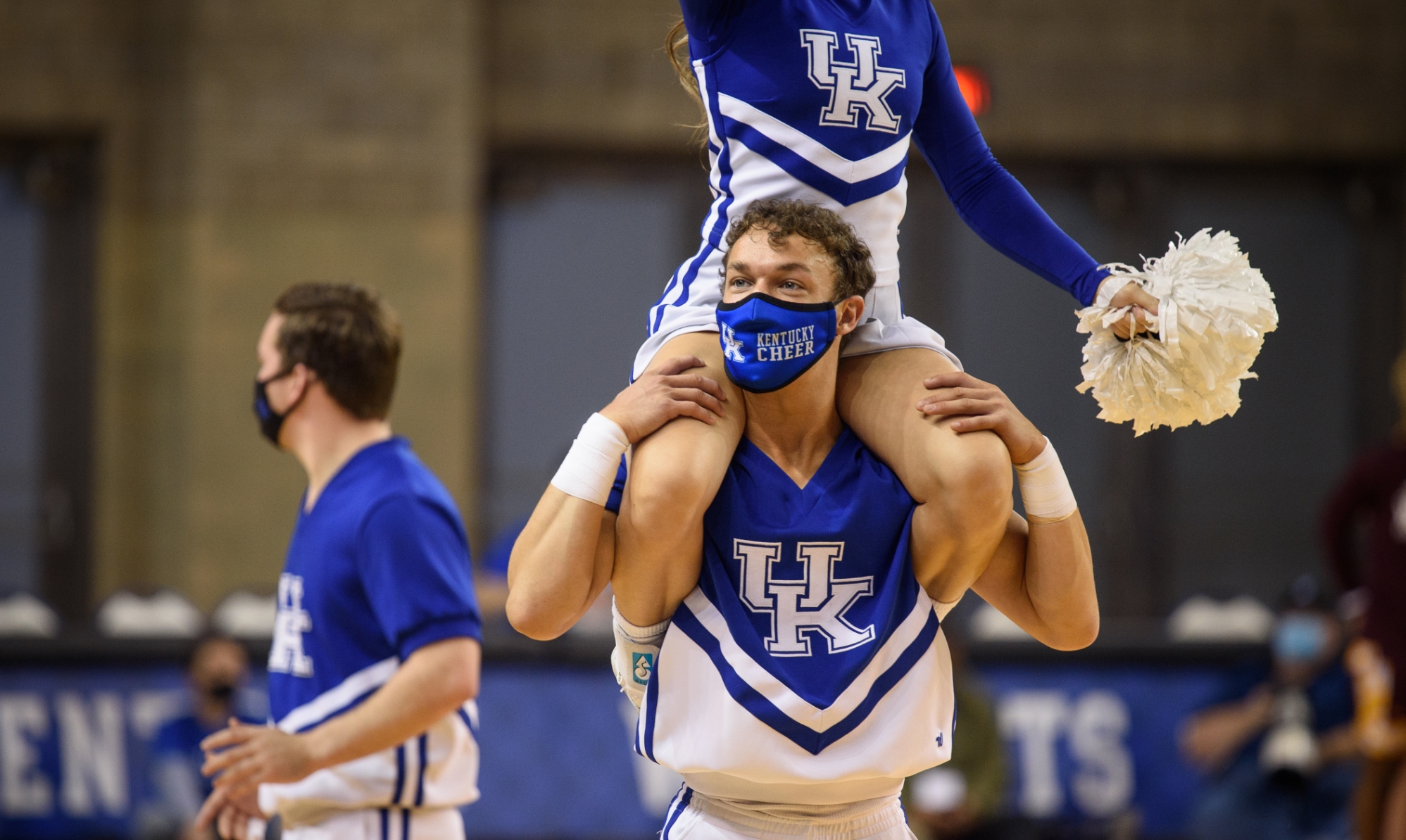 “I had a little bit of shoulder pain but [thought it was] tendonitis,” said Travis. “It's typical to have shoulder pain.”

Before the dislocation, Travis had some shoulder pain from an injury in his first semester, but he wasn’t concerned about it. Shoulder pain is common, especially with cheerleaders like Travis who serve as a sturdy base for the lightweight flyers. But during a 360-degree twist, Travis felt his shoulder partially dislocate. He pushed through, but the pain got worse as the days went on and he kept attending practice. 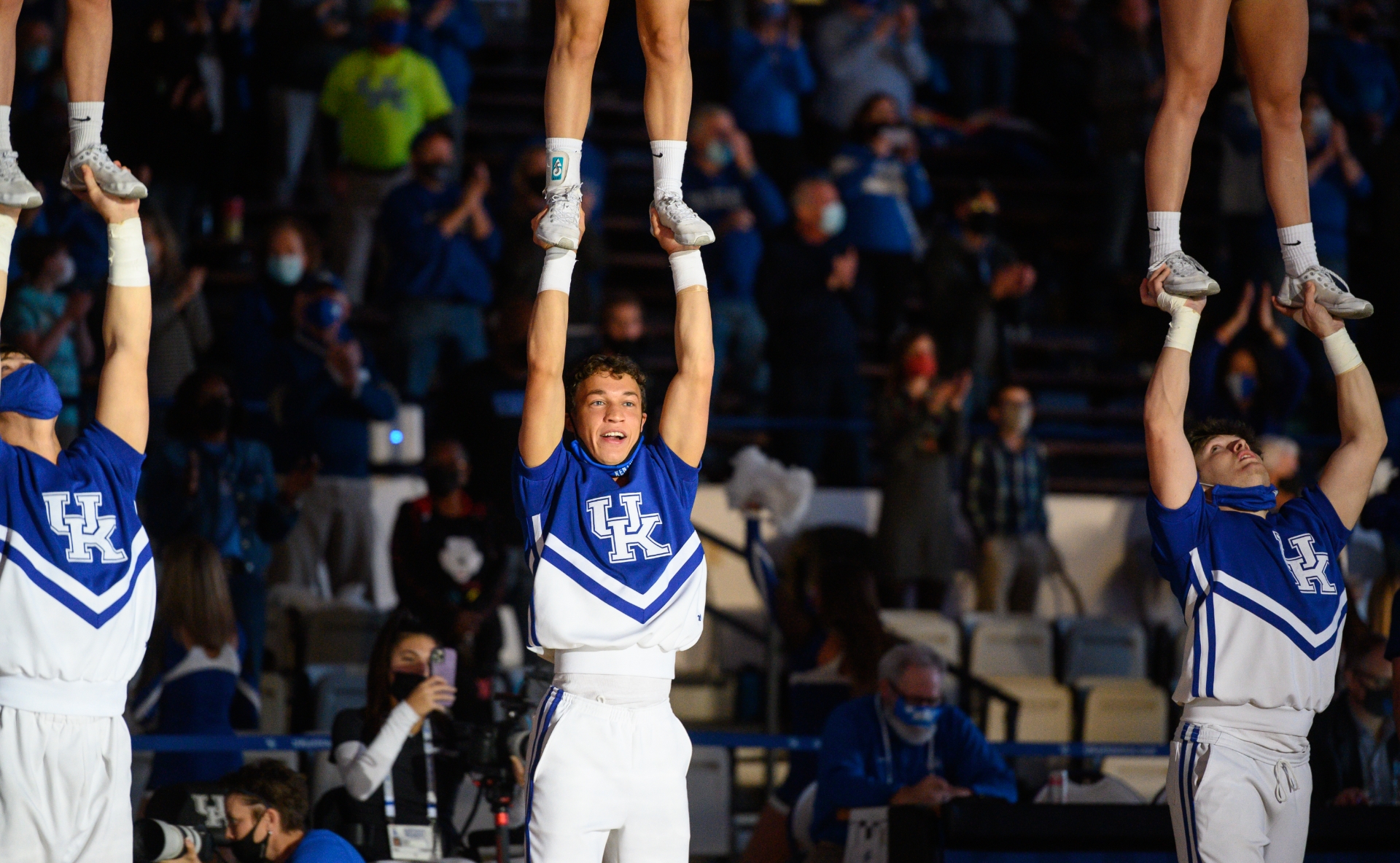 “Every single part of the body is used,” said Travis. “Your shoulder flexibility is a big thing.”

“I throw five full-ups and they’re dropping; I’m not hitting any of them,” said Travis. “And then I did hit, but I over-rotated just a little bit. My shoulder dislocated and then popped right back in.”

That night, Travis couldn’t sleep because of his pain. The next day, he met with Dr. Kimberly Kaiser, Associate Professor of Orthopaedic Surgery and Sports Medicine and one of the team physicians for UK Cheer. 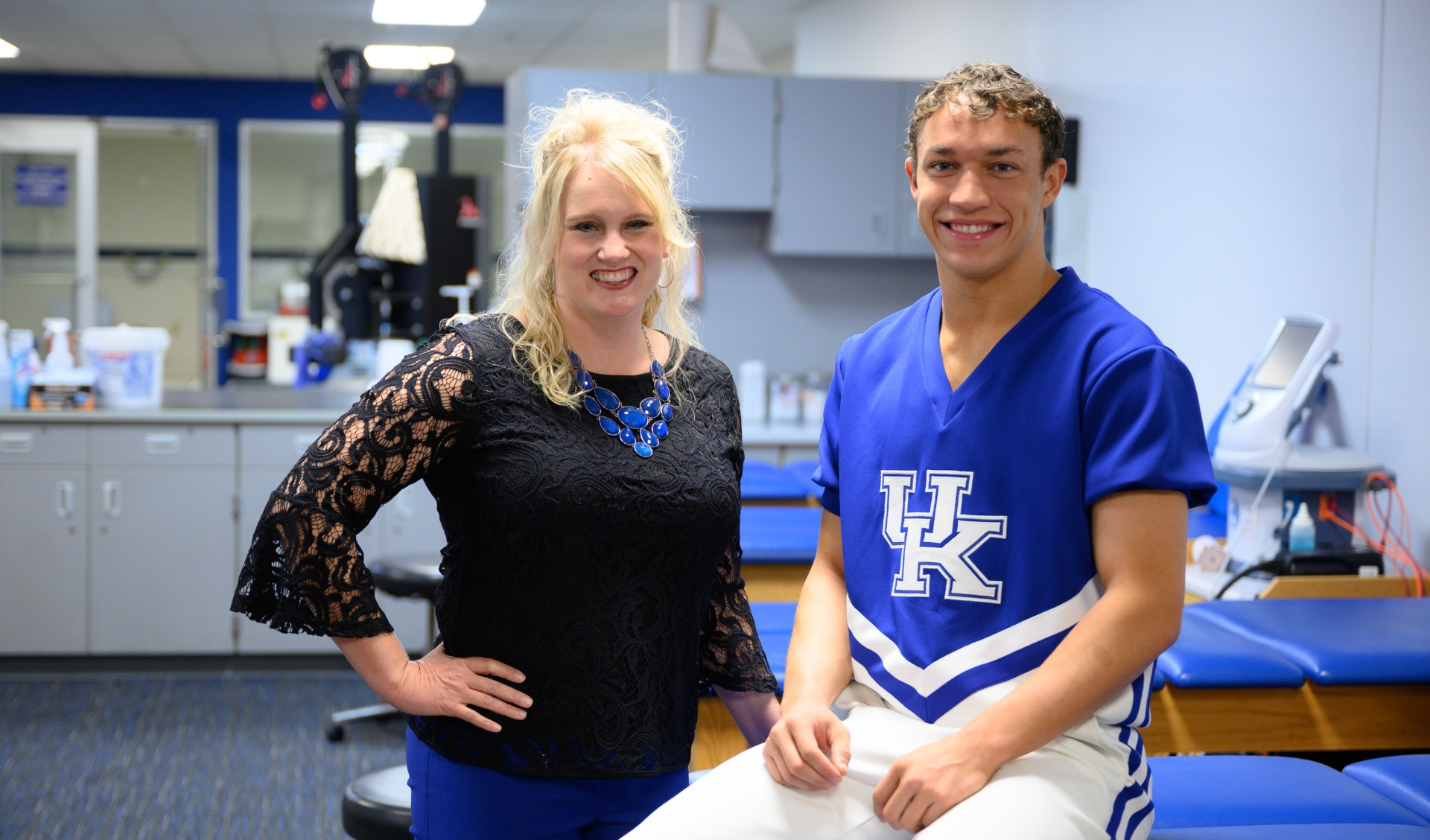 “[He] did well for several weeks and then had another, [more significant] instability episode,” said Dr. Kaiser.

“It’s not uncommon with male cheerleaders putting female cheerleaders over their heads in sequential stunt positions that their shoulders shift a little bit or feel unstable, especially combined with the difficulty of stunts our UK cheerleaders perform,” said Dr. Kaiser. 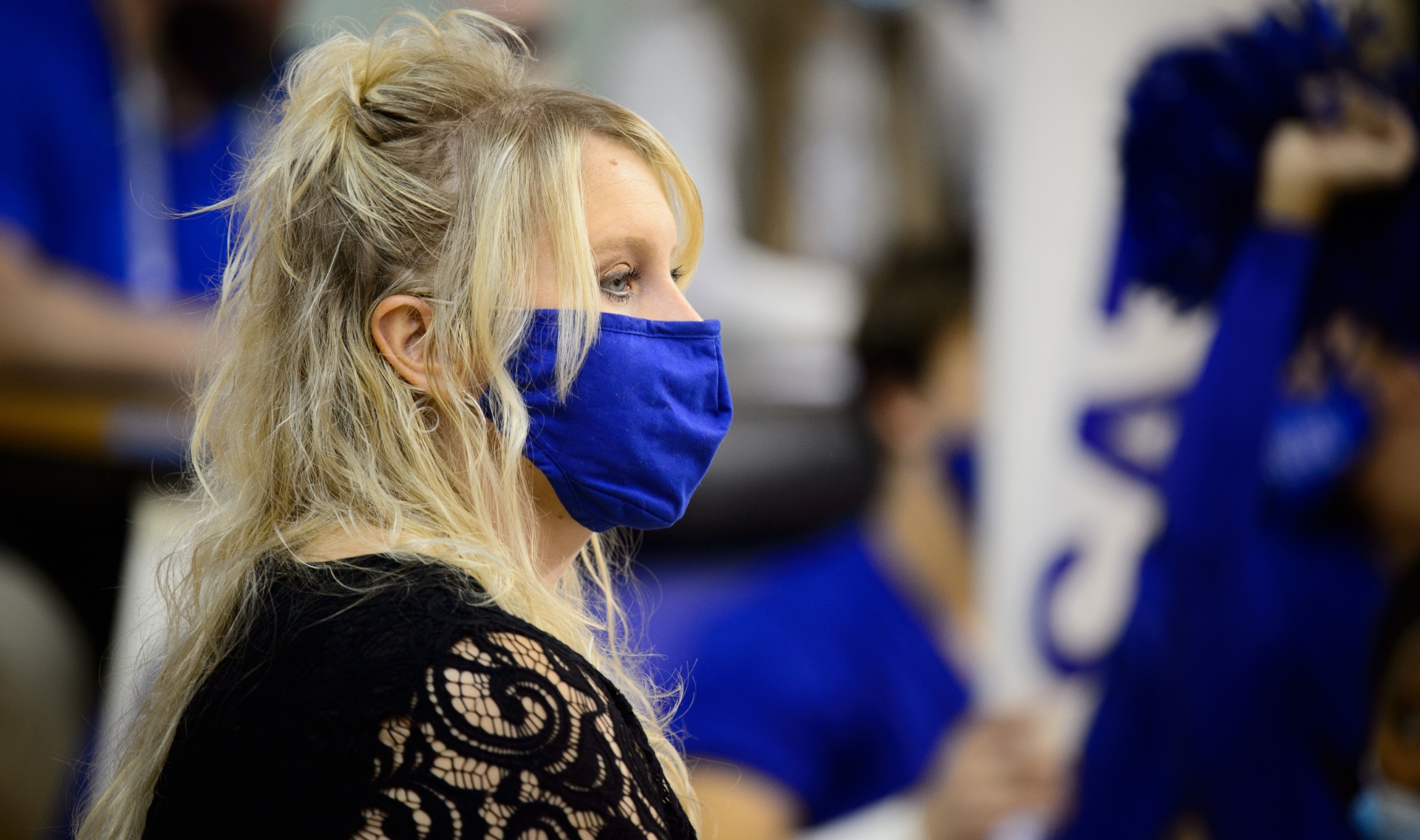 “As the team physician, I understand the support that’s needed to overcome an injury,” said Dr. Kaiser.

An MRI revealed the extent of the damage to Travis’s shoulder: a labral tear and fractured bones from the force of the shoulder dislocating and snapping back into place. Travis had two choices: he could undergo surgery and sit out the rest of the season and Nationals, or he could try to compete at Nationals and do the surgery after. As much as he wanted to be a part of the Nationals team, he knew it wasn’t the right choice—he, and his teammates, had to be able to trust his body. 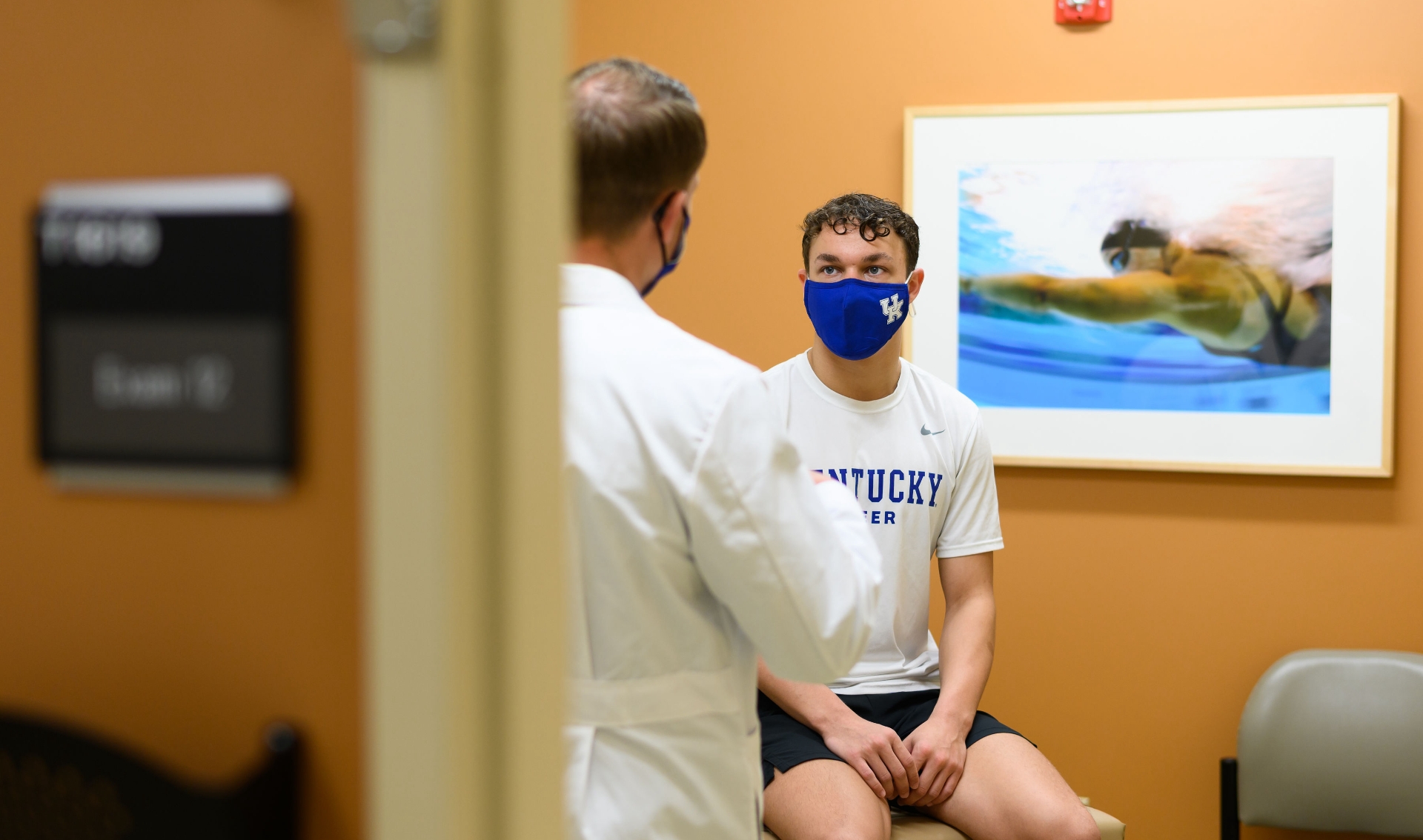 “It made his shoulder unstable,” said Dr. Mair. “It was sliding around too much. He couldn’t trust it.”

“There was no guarantee that my shoulder wouldn’t give out again,” said Travis. “That uncertainty was too much for me to risk, especially on the Nationals mat.”

After he broke the news to his team, Travis met with Dr. Scott Mair, a surgeon at UK HealthCare Orthopaedic Surgery & Sports Medicine. They scheduled his surgery for the following week. 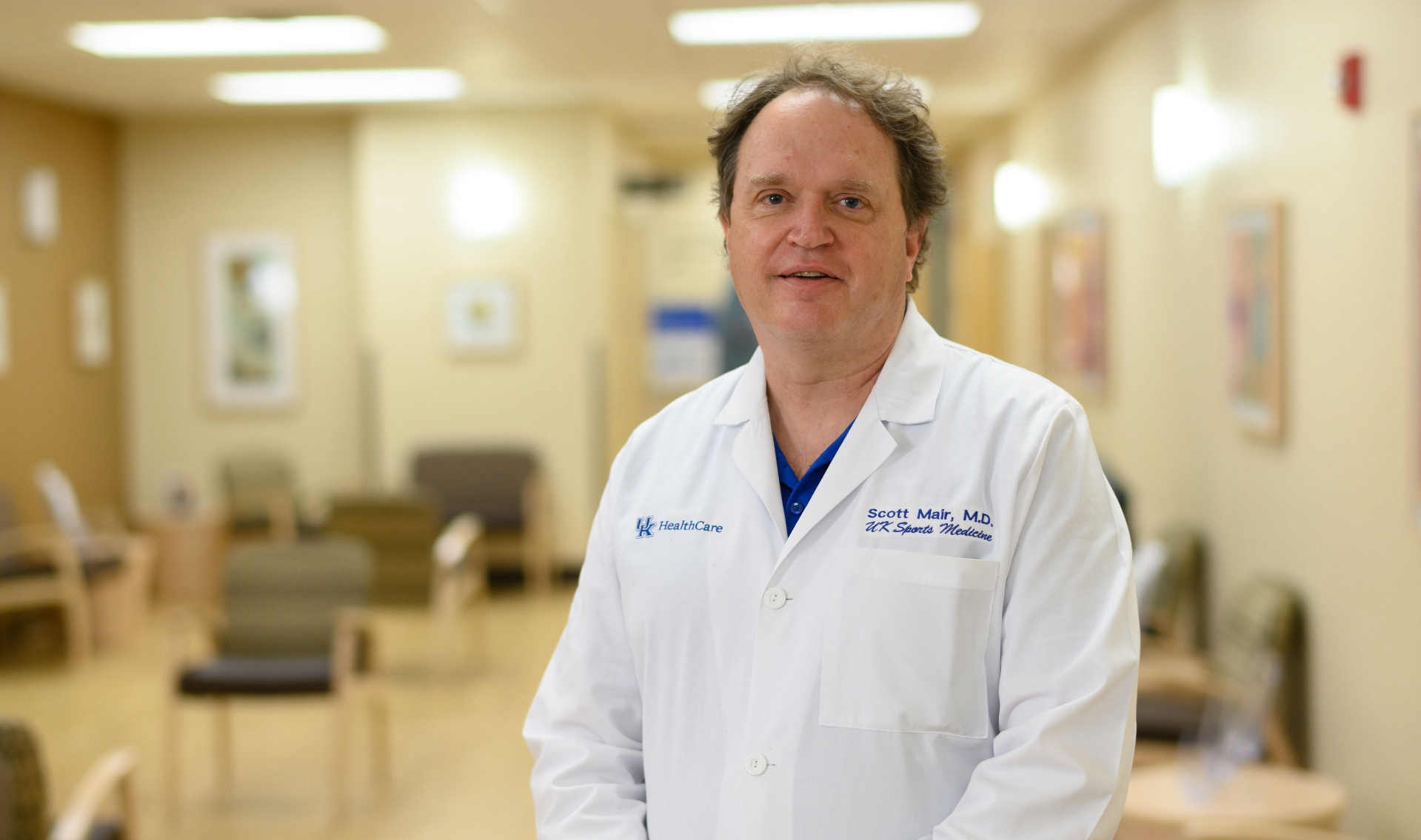 “25 years ago it would’ve been a big open surgery,” said Dr. Mair. “But that kind of technology has changed.”

“It’s an outpatient surgery that involves sutures that repair the torn part of the labrum,” said Dr. Mair. “Patients feel reasonably normal after a couple of months—and that’s when it starts to get dangerous, because you feel like you’re on the road to recovery but not yet fully healed.”

Dr. Mair and Dr. Kaiser both credit Travis’s commitment to rehab, and UK’s athletic trainers and physical therapists, for getting him back to full strength for the fall 2021 cheer season. 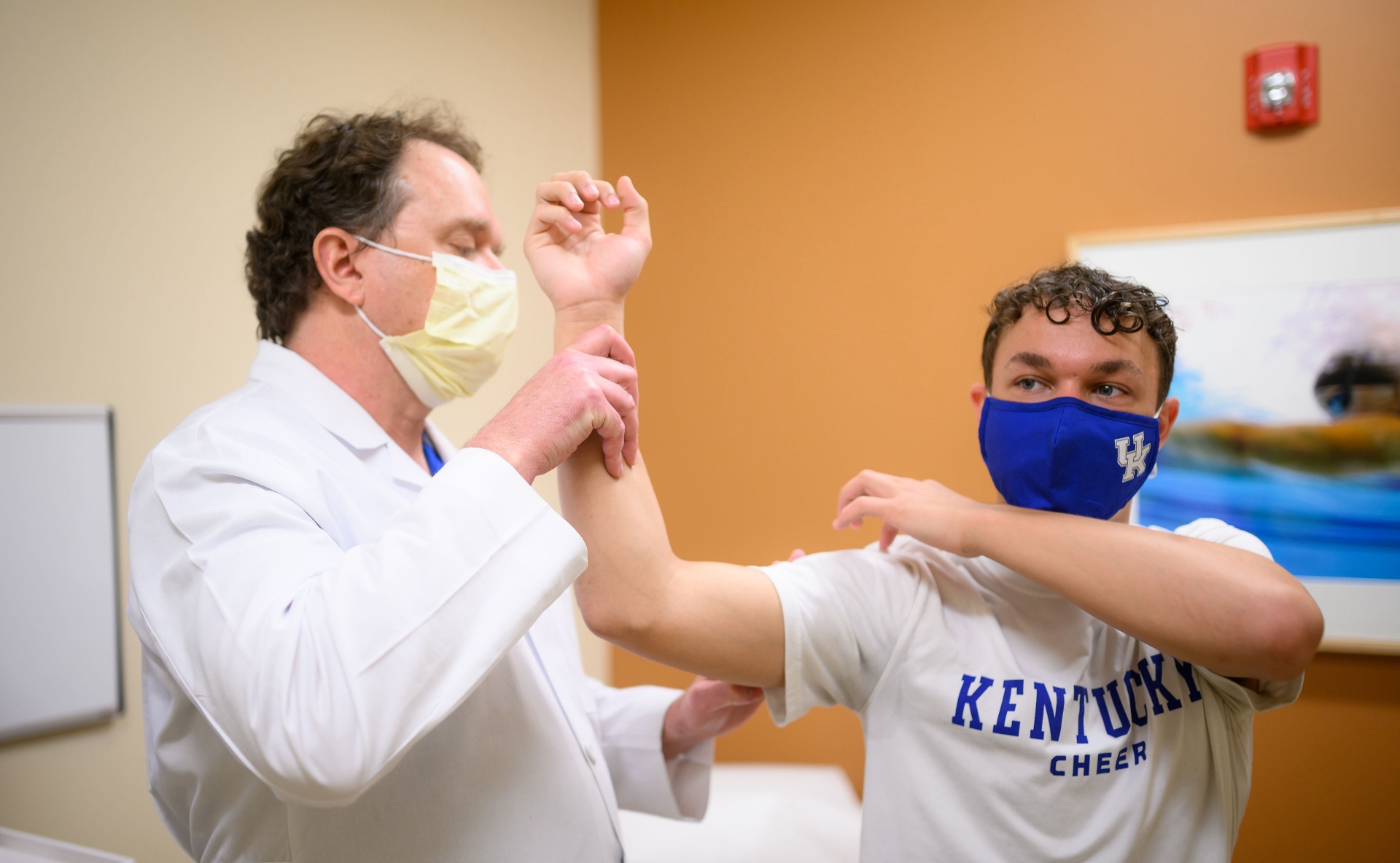 “I do rehab twice a week,” said Travis. “[My shoulder] feels better than it did before.”

“We typically do a lot of rehab to get their shoulder strength back and cue them in proper positioning for lifting and stunting to prevent reinjury,” said Dr. Kaiser. “It’s rewarding to see how hard these athletes work in rehab, and many of them end up stronger than before because they put in so much hard work.” 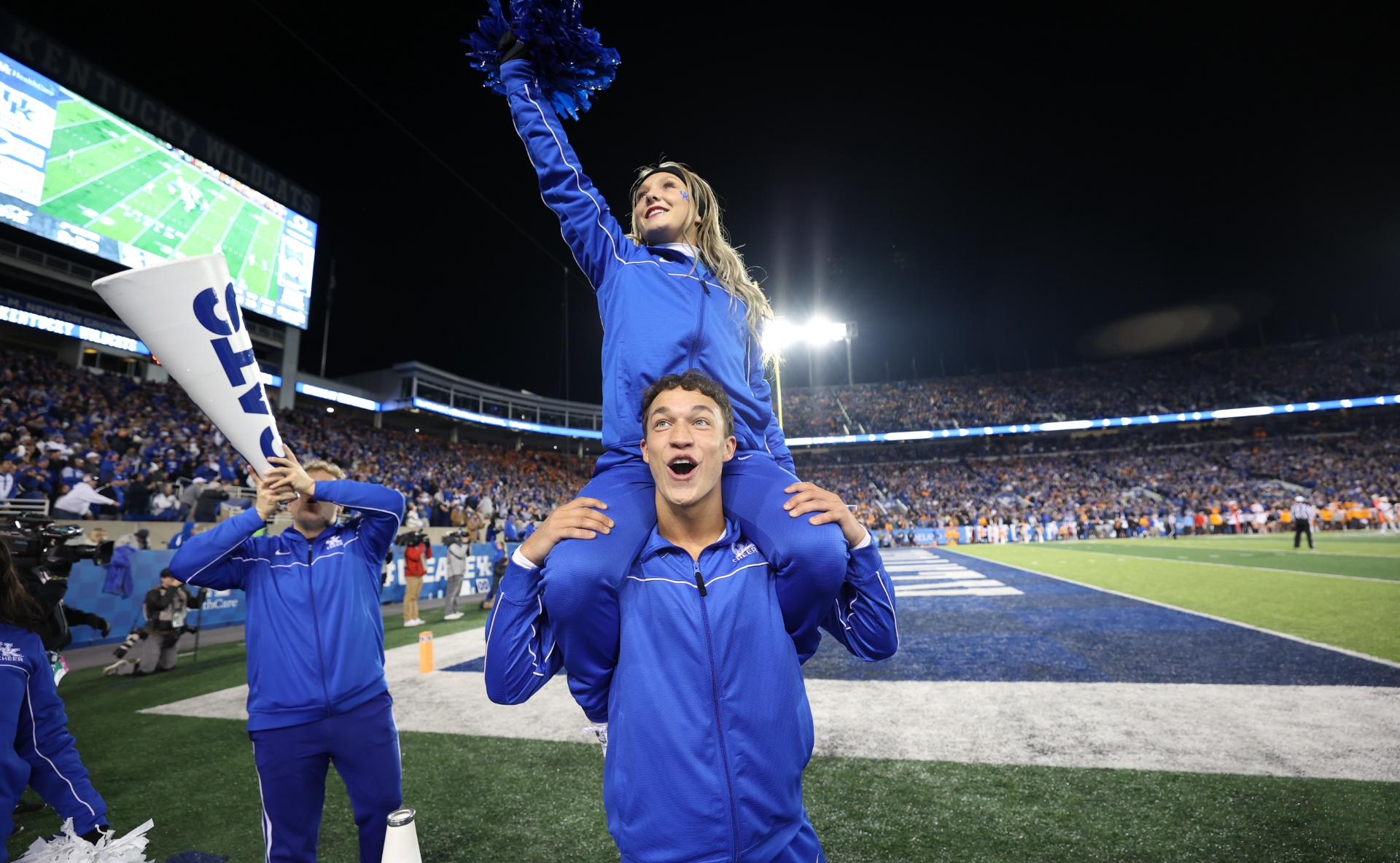 “[My shoulder is] a lot more stable,” said Travis. “So they've been gradually putting me back into games.”

As a pre-med major at UK, Travis’s relationship with Dr. Kaiser and Dr. Mair has opened the door to exploring the field of orthopaedics. Cheer has also connected him to Kentucky Children’s Hospital and the opportunity to cheer with pediatric patients—one of his favorite experiences as a Kentucky cheerleader. 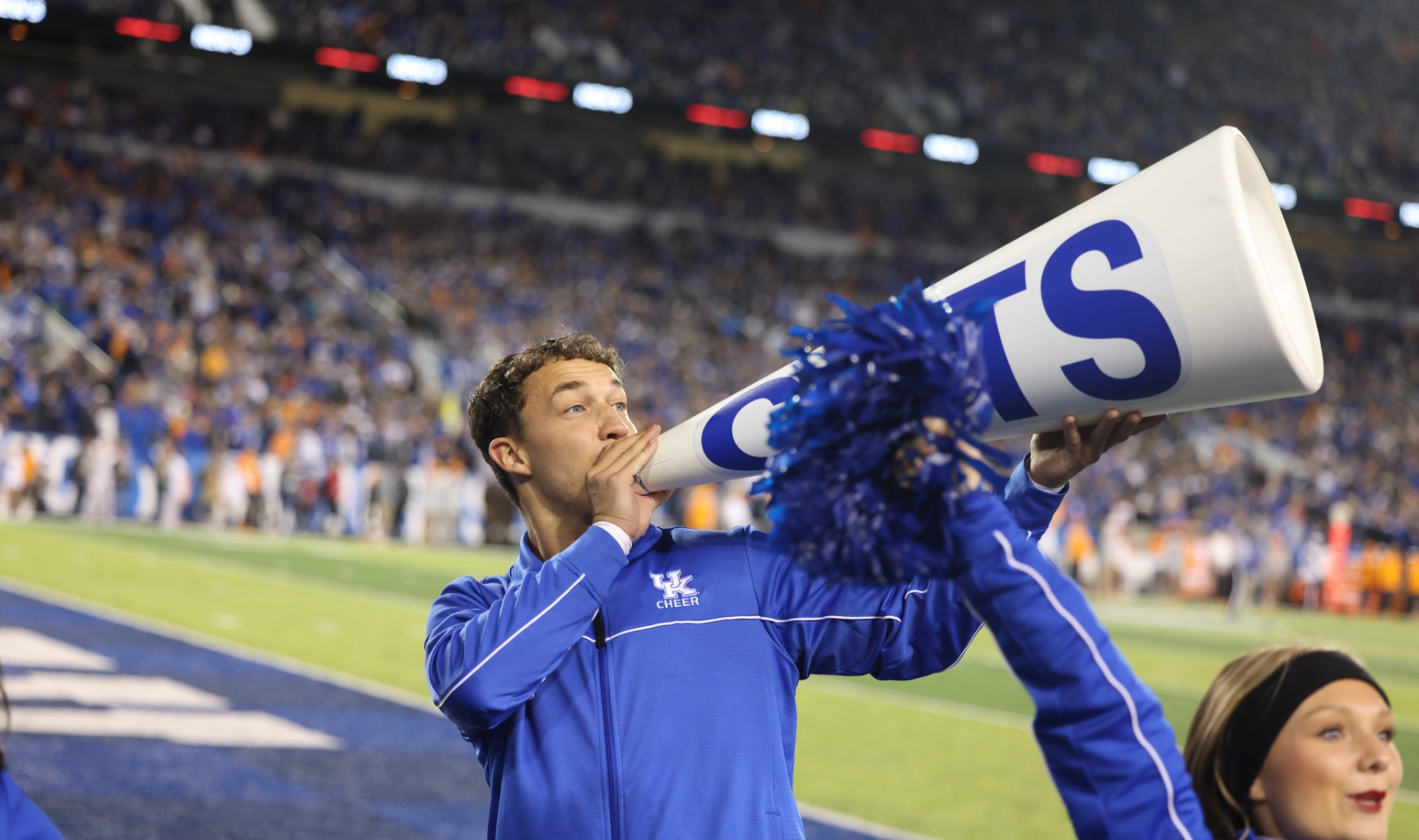 “We’re all Wildcats,” said Travis. “We’re all pushing to do better in every way, whether it’s on the field as an athlete or as a healthcare worker.”

Travis, now a sophomore, is back on the mat at full strength. With his team around him, he’s ready to tackle the challenge of winning their 25th national championship in early 2022. His shoulder injury gave him a new perspective on what it means to be a part of UK Cheer—and its lasting legacy. 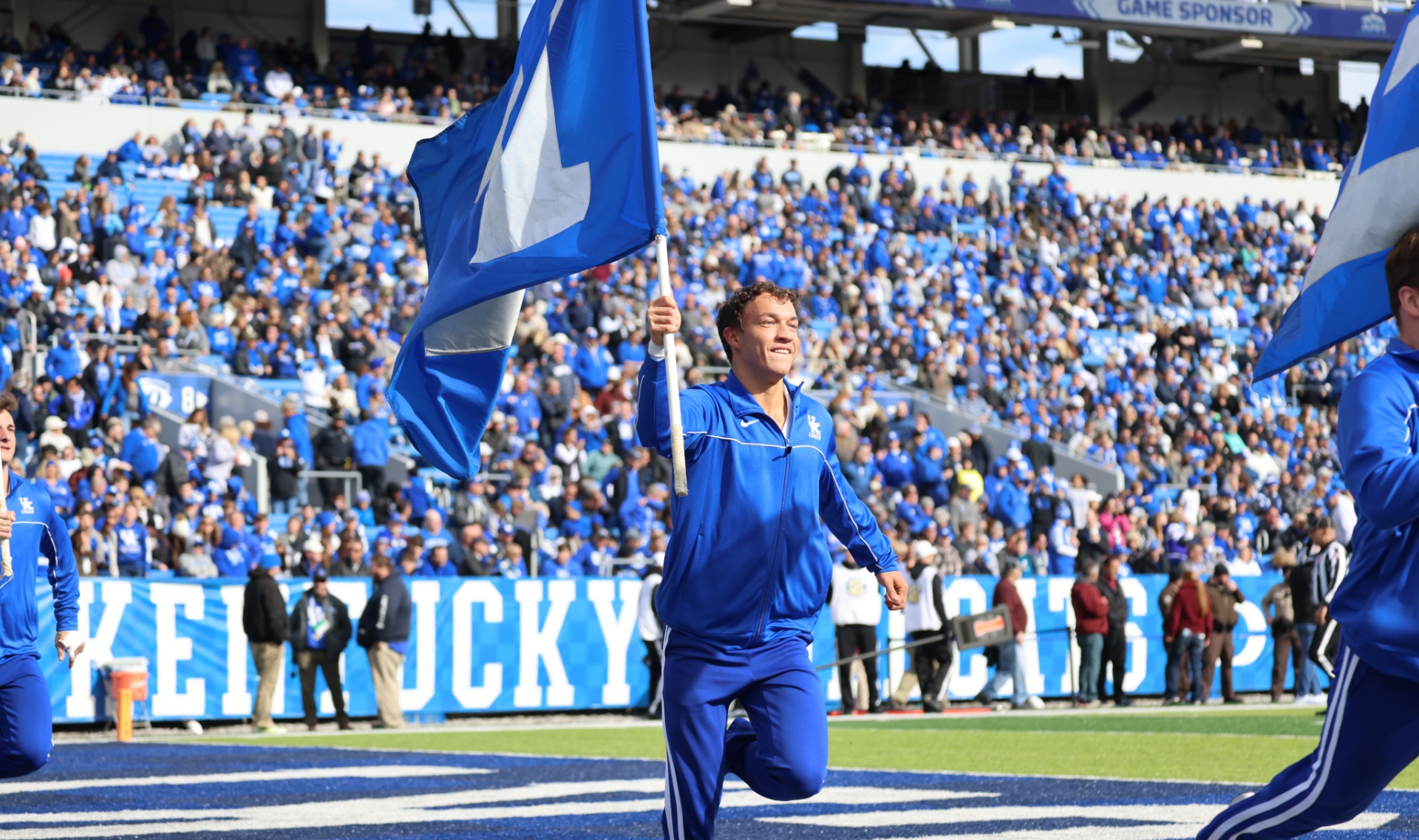 “A big thing for me is honoring the success of the people who came before me with my own success,” said Travis. 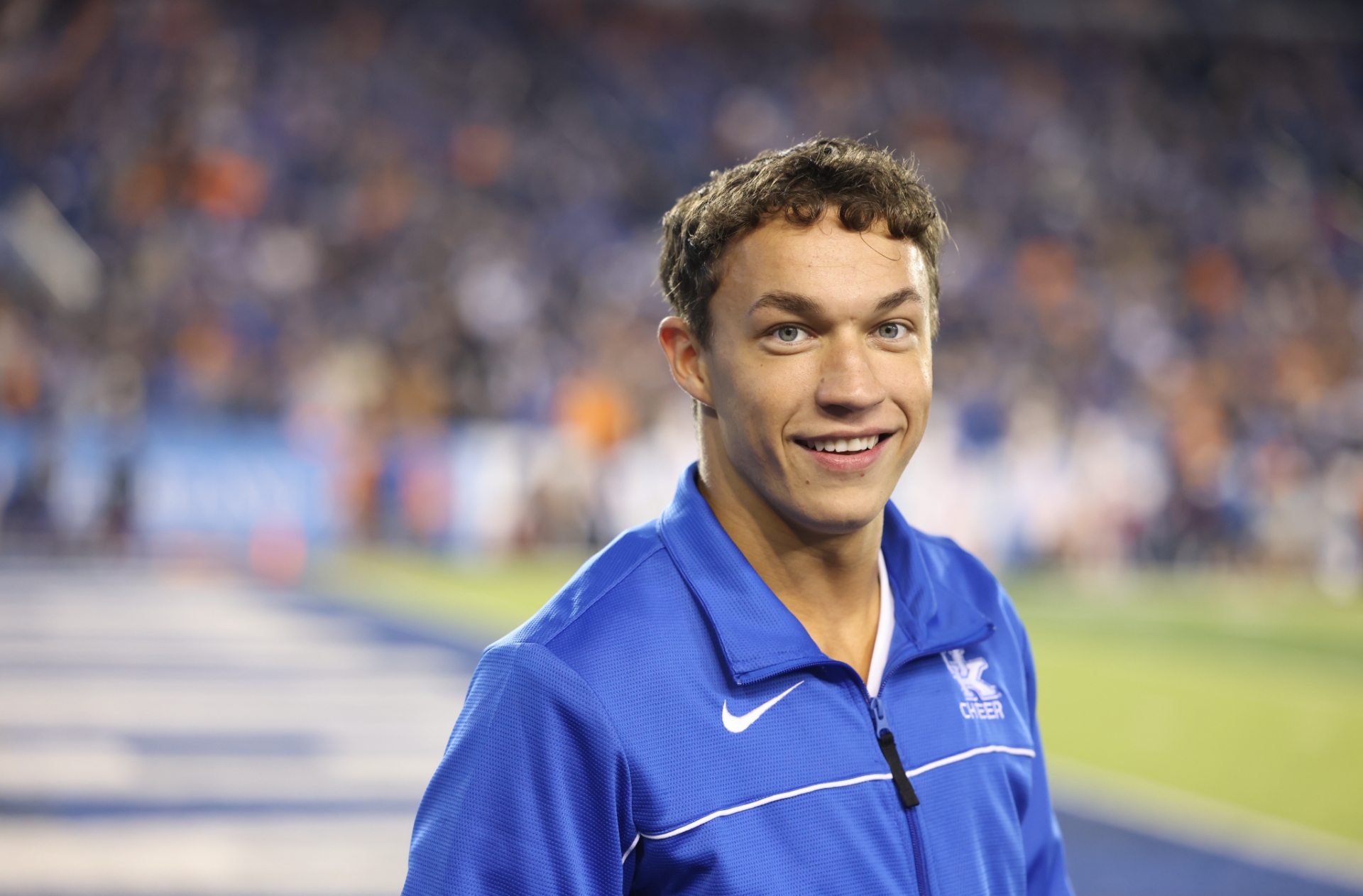 “There’s no reason to be in pain.”Orthopaedics

“I need to be a part of this.”Big Blue Nation, Cancer, Pediatric Services