Karen Douglas is quick on her feet. You have to be, when you’re being towed behind a boat going nearly 40 miles per hour, skating across the surface of the water on just the balls of your feet. 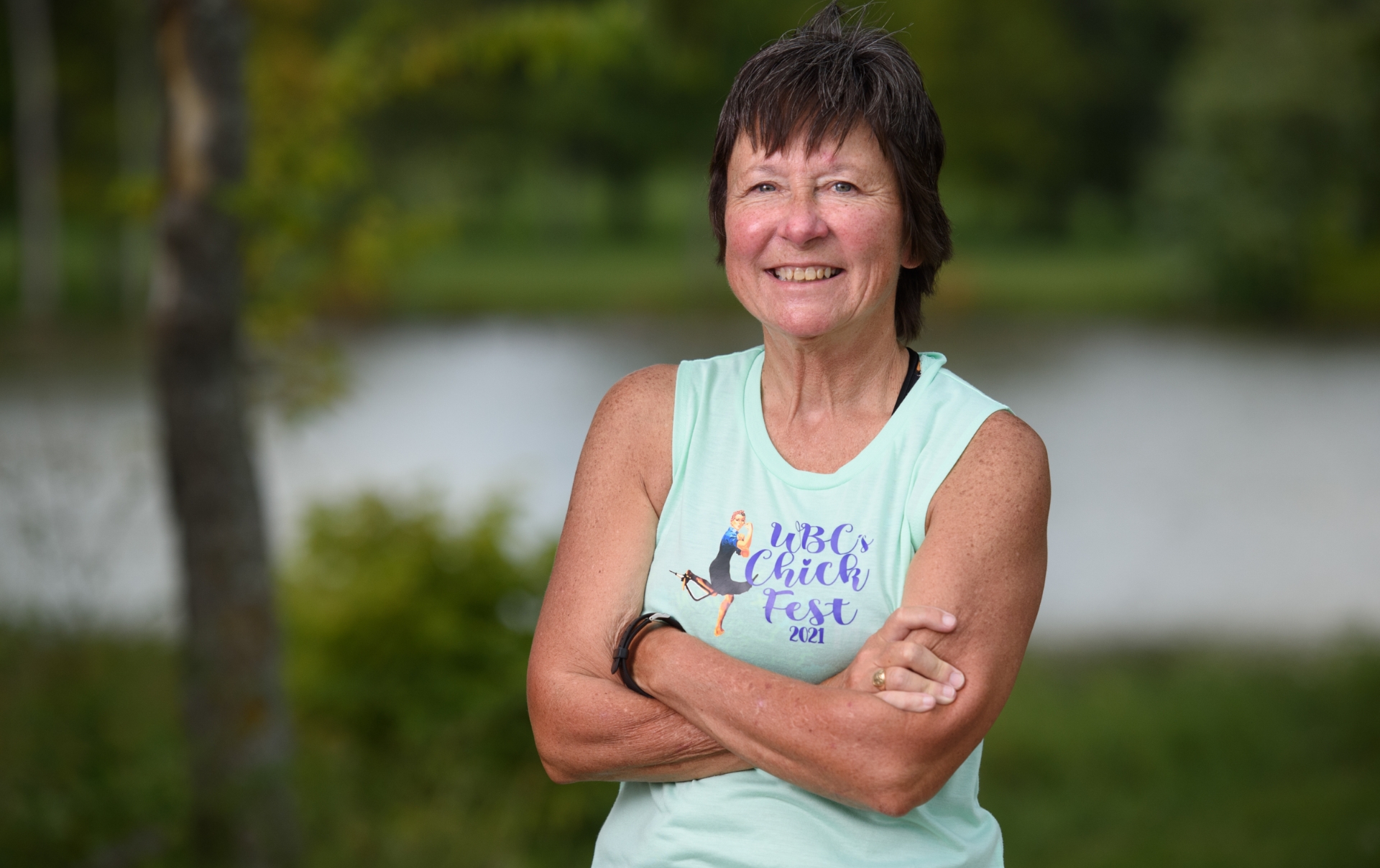 “I've always skied and I just wanted to try it,” said Karen. “So I went to Florida and started learning.”

About seven years ago, Karen began learning to barefoot water ski. It’s a more challenging version of the already-intense sport that’s exactly what it sounds like: water skiing, but without the skis.

“It’s an endurance and extreme sport,” Karen said. “It’s very physical, and takes a lot of core strength and leg strength.” In addition to her water skiing, 62-year-old Karen also walks, rides horses, and takes Zumba classes—but all of that became nearly impossible after an injury two years ago, when her knee, which had been bothering her for years, was seriously damaged. 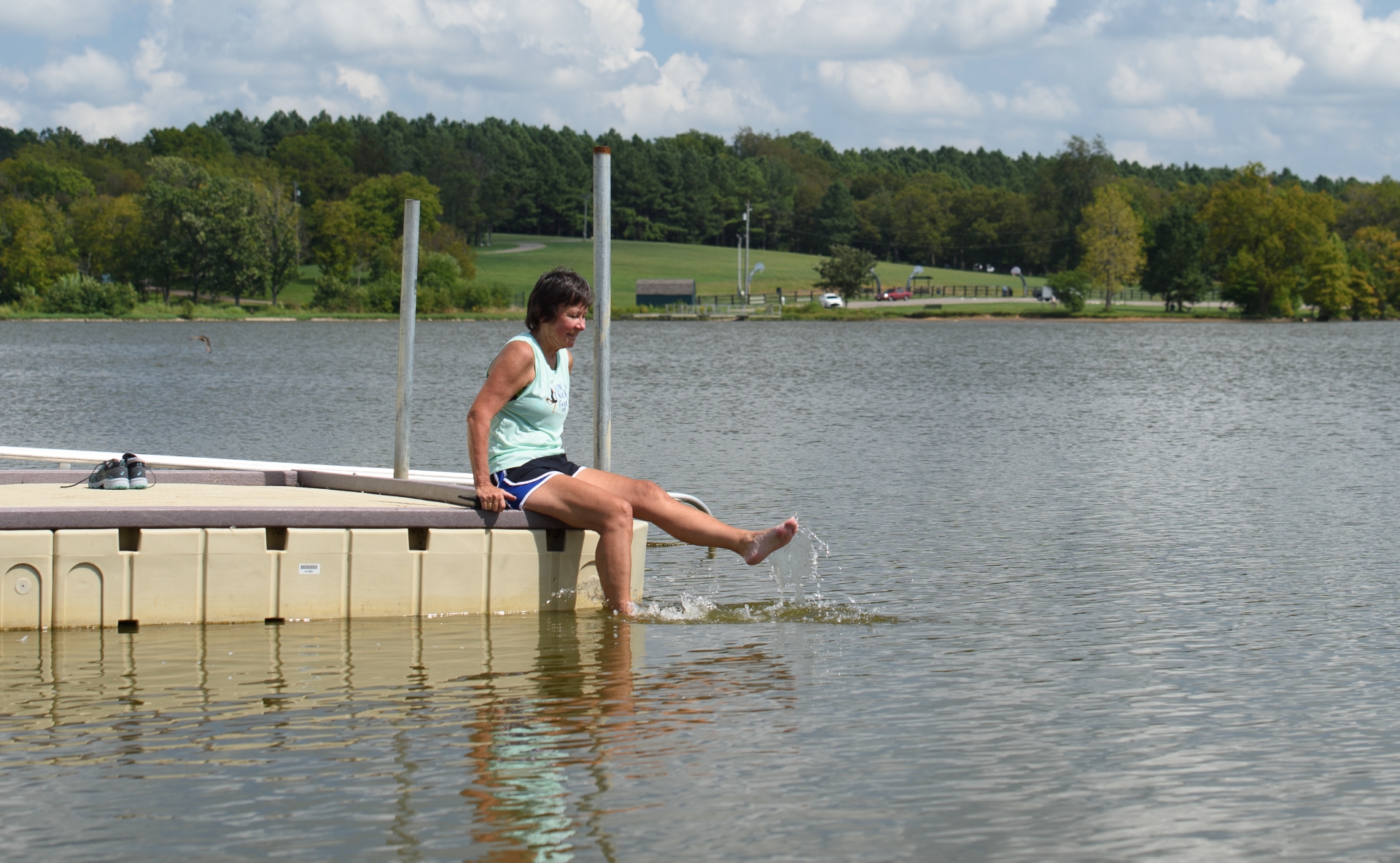 Years of knee troubles finally caught up with Karen, threatening to keep her out of the water.

“I stepped down out of my truck and felt my knee pop,” she said. “At that point, they said I had a torn PCL and bone-on-bone arthritis.” Karen received a few months of cortisone shots to manage the pain in her knee, but it quickly became obvious that she needed a more serious intervention. Dr. Darren Johnson, a knee expert at UK HealthCare Orthopaedic Surgery & Sports Medicine who’d replaced Karen’s ACL and repaired her torn meniscus more than a decade earlier, told her a total knee replacement was the only option—and connected her with the best surgeon to do it. 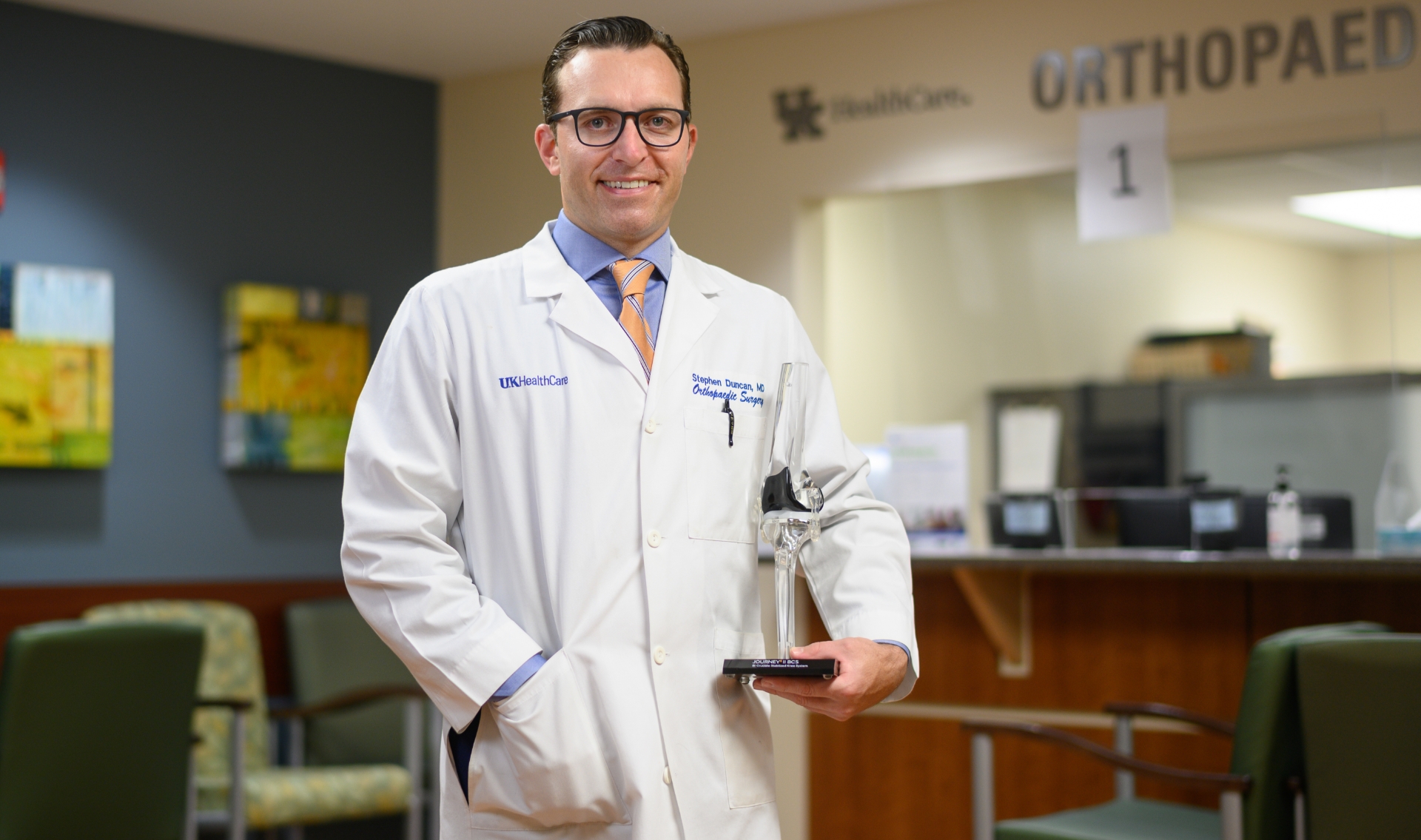 In addition to being a knee specialist, Dr. Stephen Duncan is an avid cyclist.

“He recommended Dr. Stephen Duncan,” said Karen. “He said, ‘If I had to have a knee replacement, that’s the guy I’d want to do it.’”

A knee and hip replacement specialist at UK Orthopaedic Surgery & Sports Medicine and an athlete himself, Dr. Duncan was the perfect fit for Karen. After learning about her active lifestyle and hobbies—and her goal to return to them—he knew a more traditional knee replacement surgery, which requires removing the anterior and sometimes the posterior cruciate ligaments, wasn’t the right fit for her. 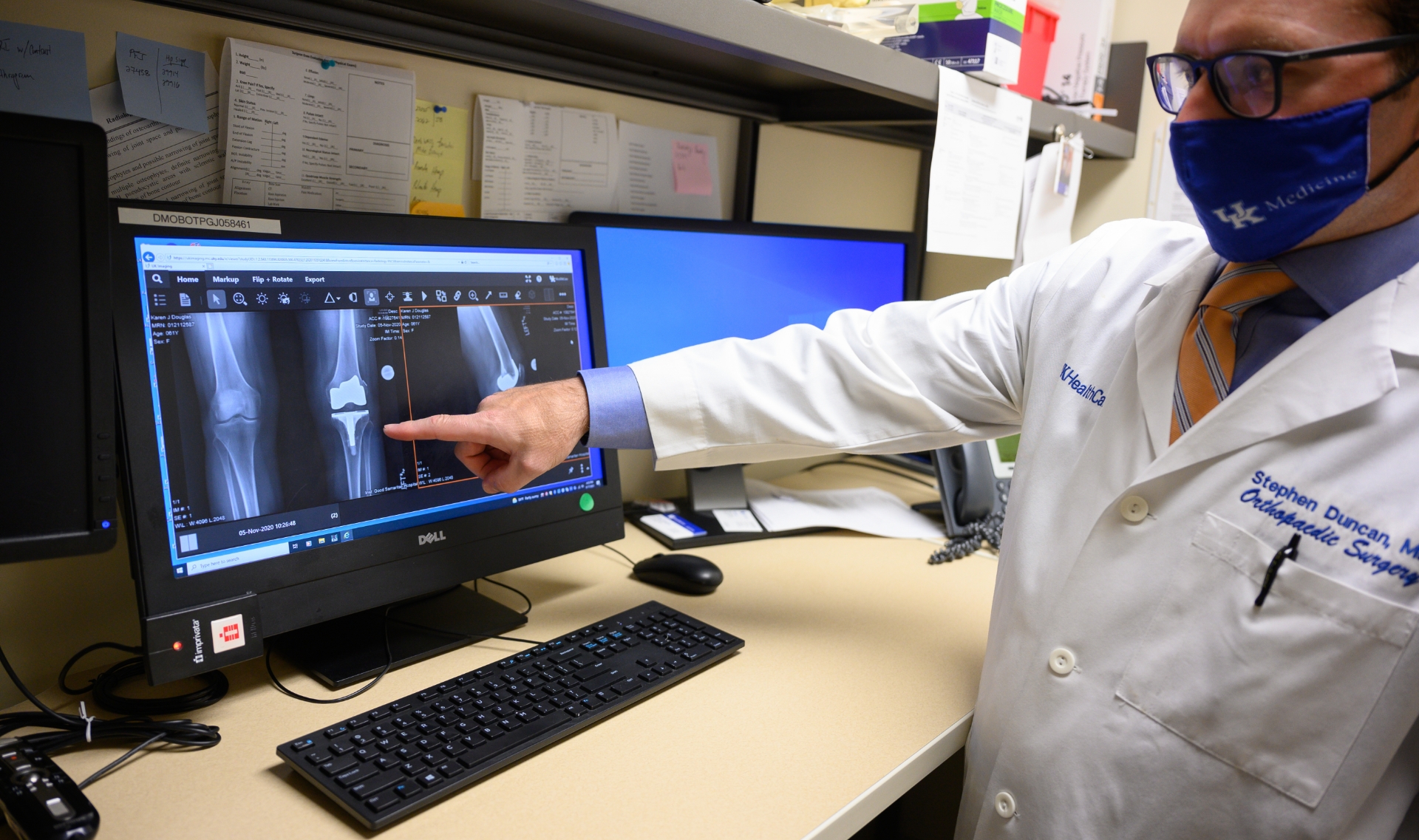 “[The goal] is to try and give them a more normal-feeling knee,” said Dr. Duncan.

Dr. Duncan explained that people who undergo a more traditional knee replacement surgery tend to depend more on their quadriceps muscle. “When you’re doing more activity, your quad is going to fatigue much faster,” he said. “Karen probably would not have been able to get back to doing those higher-level activities, like barefoot water skiing. You just wouldn’t trust the knee, and the last thing you want is to not trust your knee when you’re being pulled behind a speedboat.” 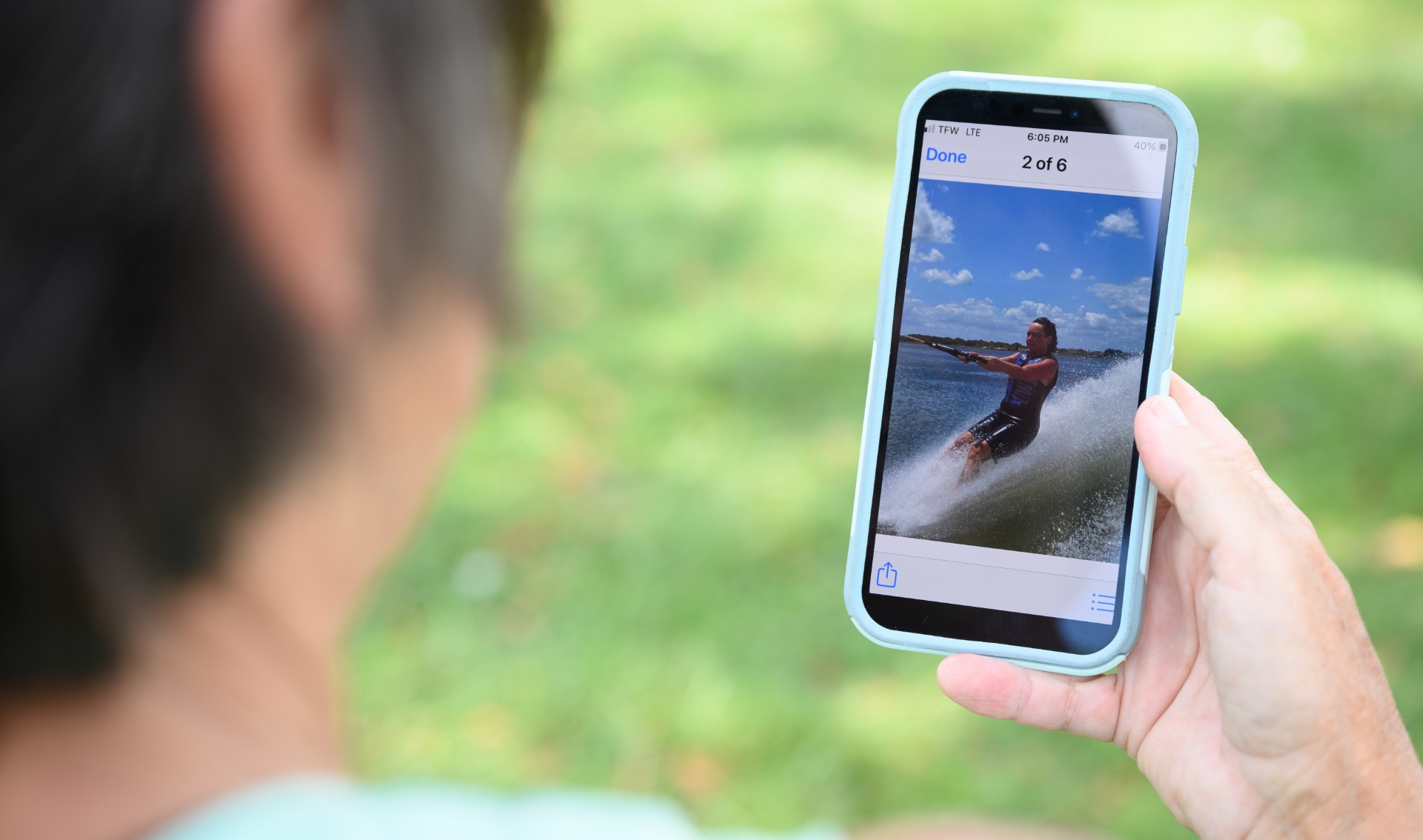 “There's a group of us ladies who have [skied] together for several years,” said Karen.

But that’s exactly where Karen wanted to be. So when Dr. Duncan presented her with options beyond traditional knee replacement, she was open to whatever would get her back on her feet.

“At that point I couldn’t do anything,” she said. “I hadn’t ridden my horse. I hadn’t skied for a year and a half or two years. I went in asking Dr. Duncan, ‘Can I do these things again? I want to keep doing this.’” 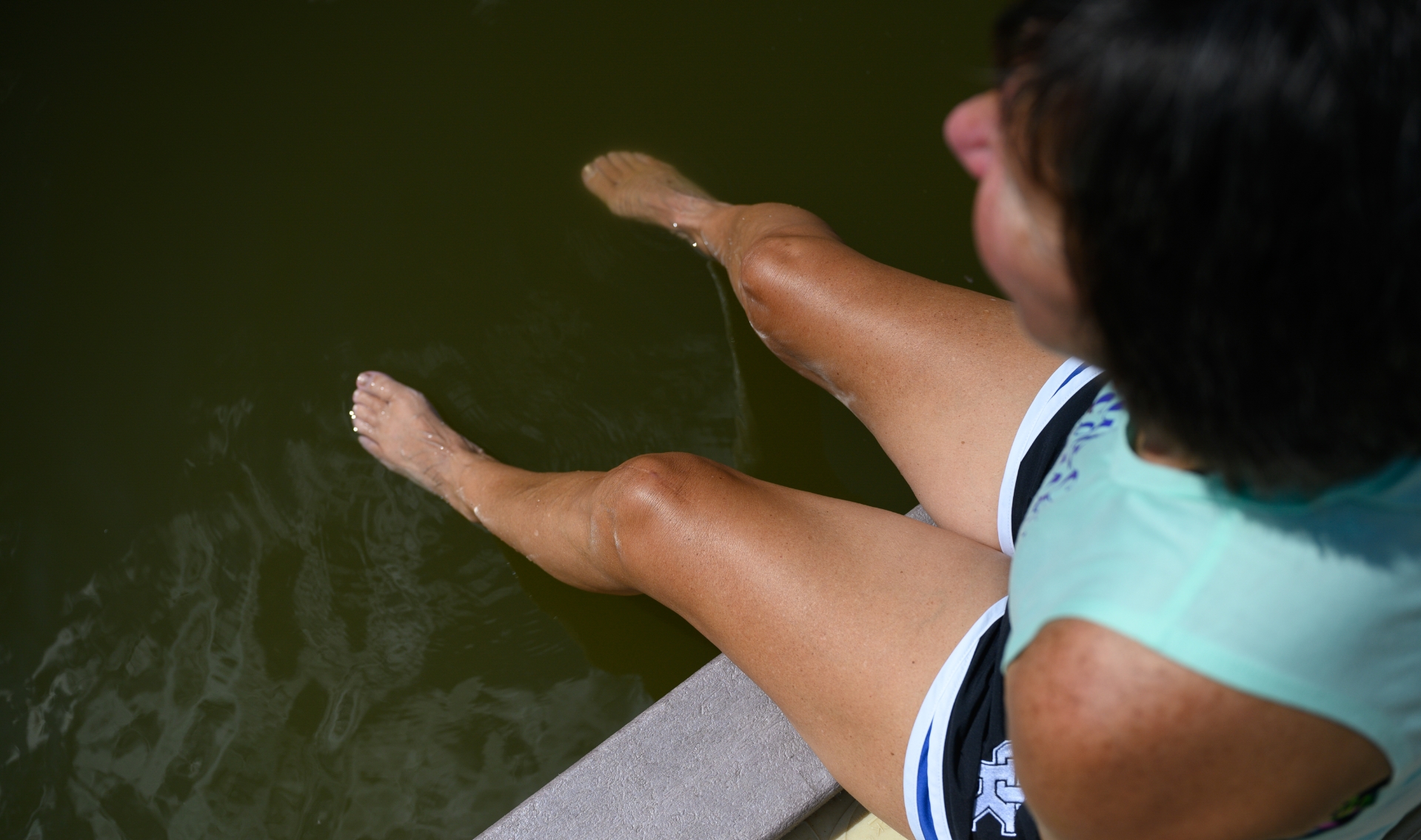 Karen was willing to do whatever it took to get back on her feet.

Dr. Duncan thought Karen would be a perfect candidate for a newer type of knee replacement, using an artificial knee called the OXINIUM Journey BCS II. Dr. Duncan was one of the first in the region to use this type of knee in 2013, and it’s become his preference because of how quickly patients who receive the procedure are up and walking around—and how much faster they’re back to normal activity when compared to a traditional knee replacement. 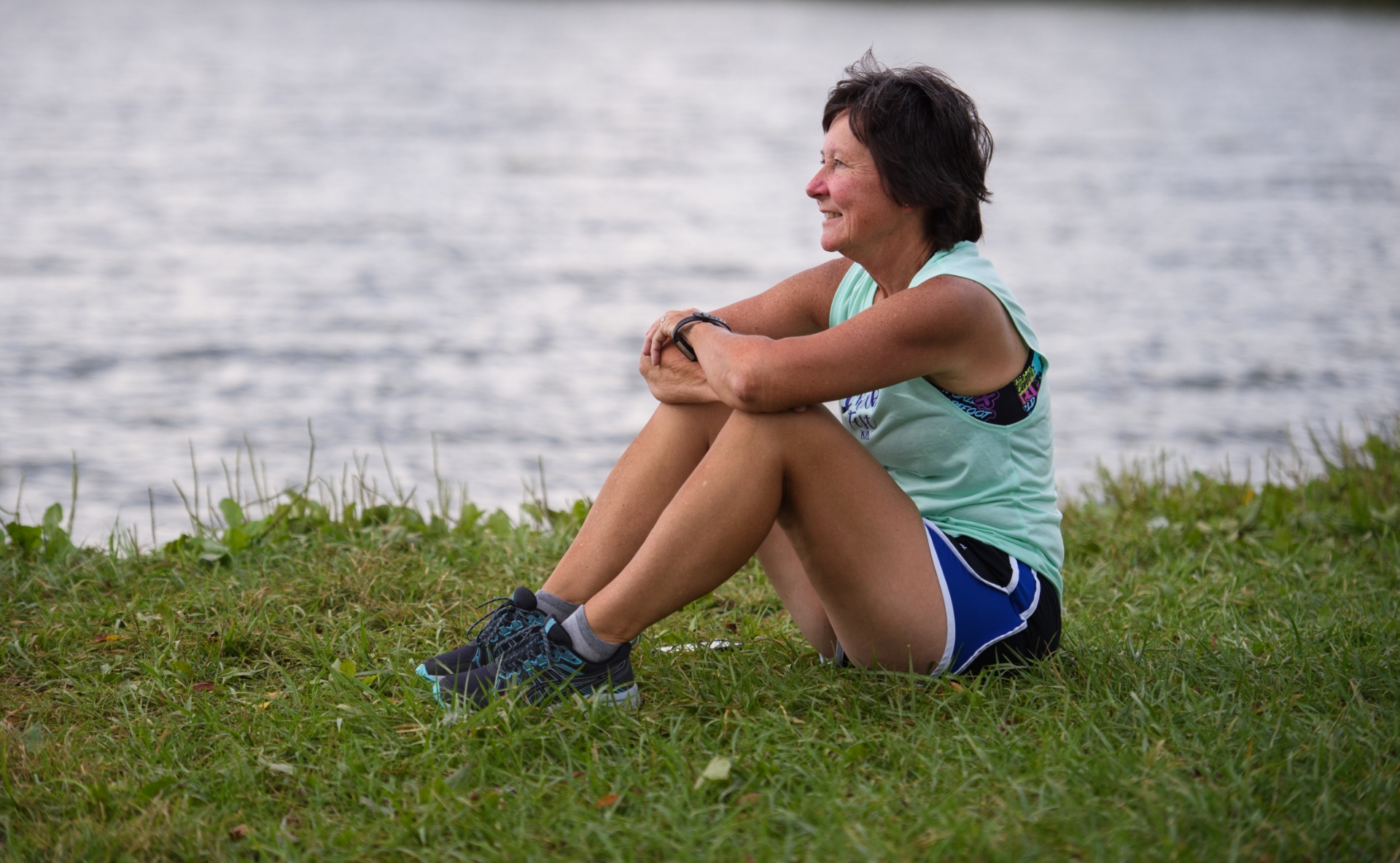 “Usually this surgery is done as a same-day, meaning they’re discharged home the day of the operation, or they go home the next day,” he said. “Where the traditional patient typically is in therapy for about three months, usually the OXINIUM Journey BCS II patients are getting discharged from therapy around six weeks. Three months is typically when I tell somebody that they’re ready to start doing more kind of vigorous activity. And then at six months, that’s when they say that they will trust their knee to do those activities that Karen Douglas was doing. It seems to cut down about six months compared to the traditional knee recovery.” 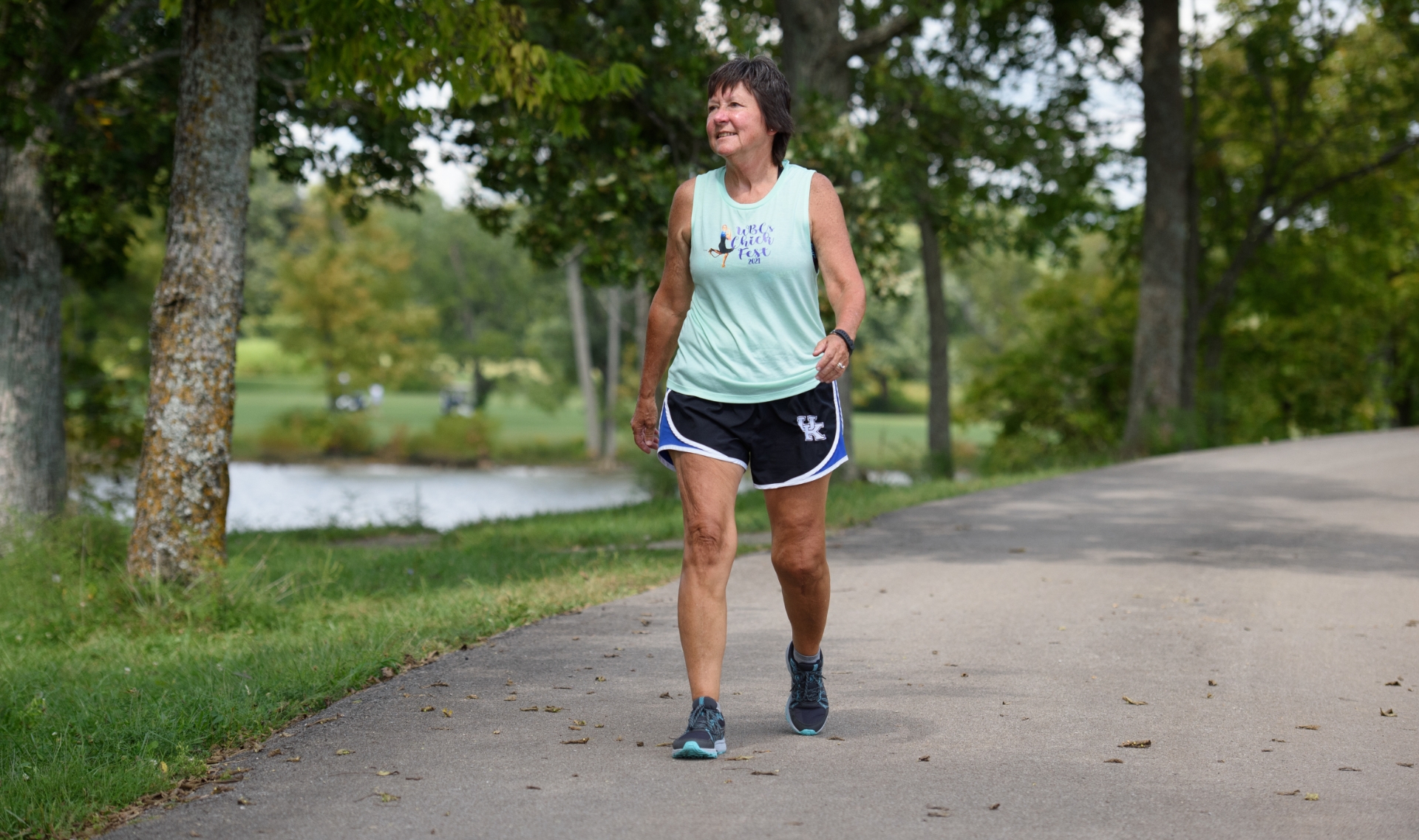 “The recovery time was less than that for my ACL,” said Karen. “I was surprised.”

A recovery that’s six months faster makes a world of difference for patients like Karen—whether they’re barefoot water skiing, or just hoping to be able to do their everyday activities pain-free. That’s Dr. Duncan’s goal for each of his patients. 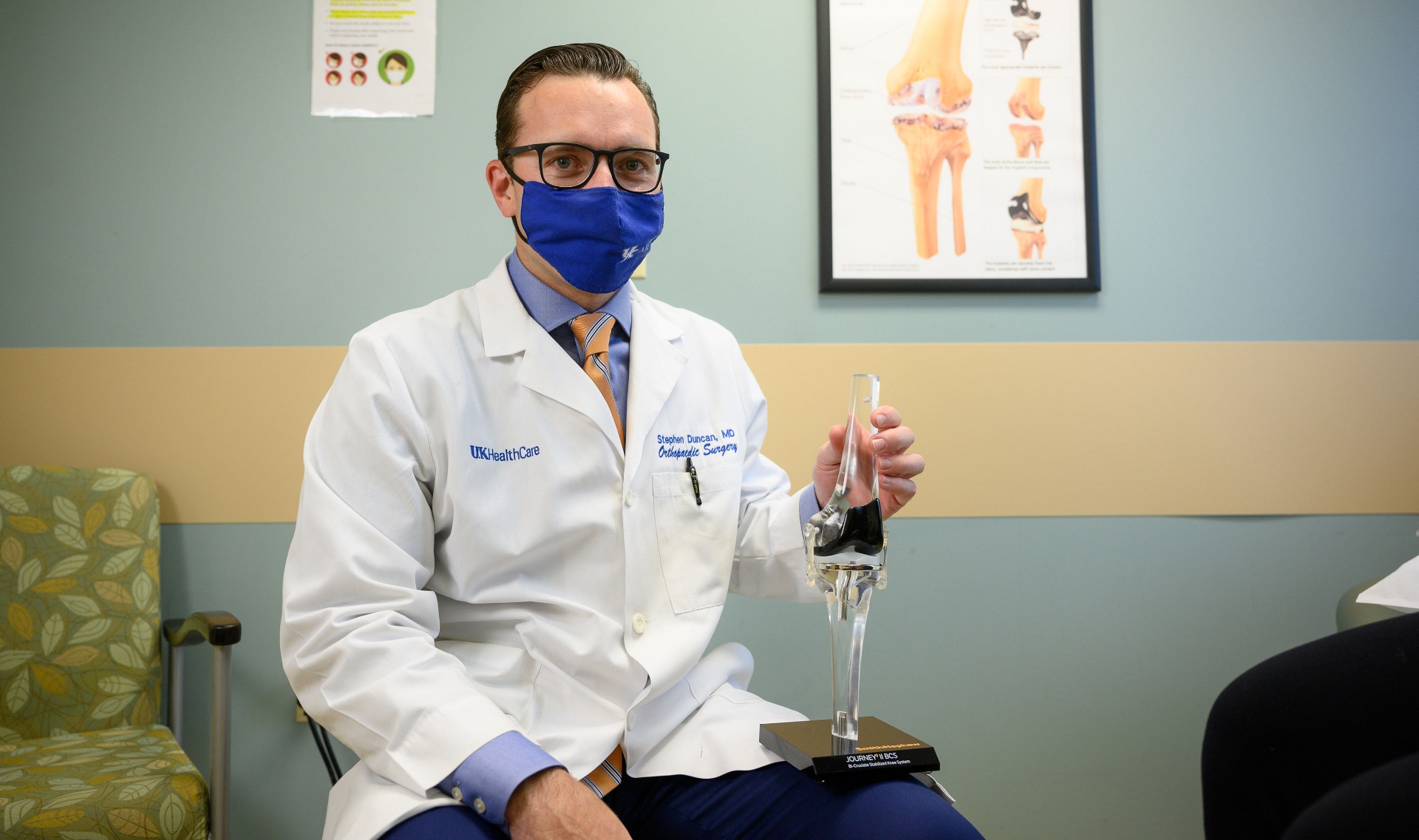 “Oftentimes the folks that have had one knee done [are] convinced to go ahead and get the other one done,” said Dr. Duncan.

“My neighbor—I actually did both of her knees a year ago—I just saw her the other night playing golf for the first time in years,” Dr. Duncan said. “She couldn’t do it prior to the knee replacement, and now she gets to go play golf with her husband and daughter. We take for granted some of the simple things, but it’s nice to go spend time and do things outside and not be in pain from it. You want somebody to forget that they had their knee replaced.” 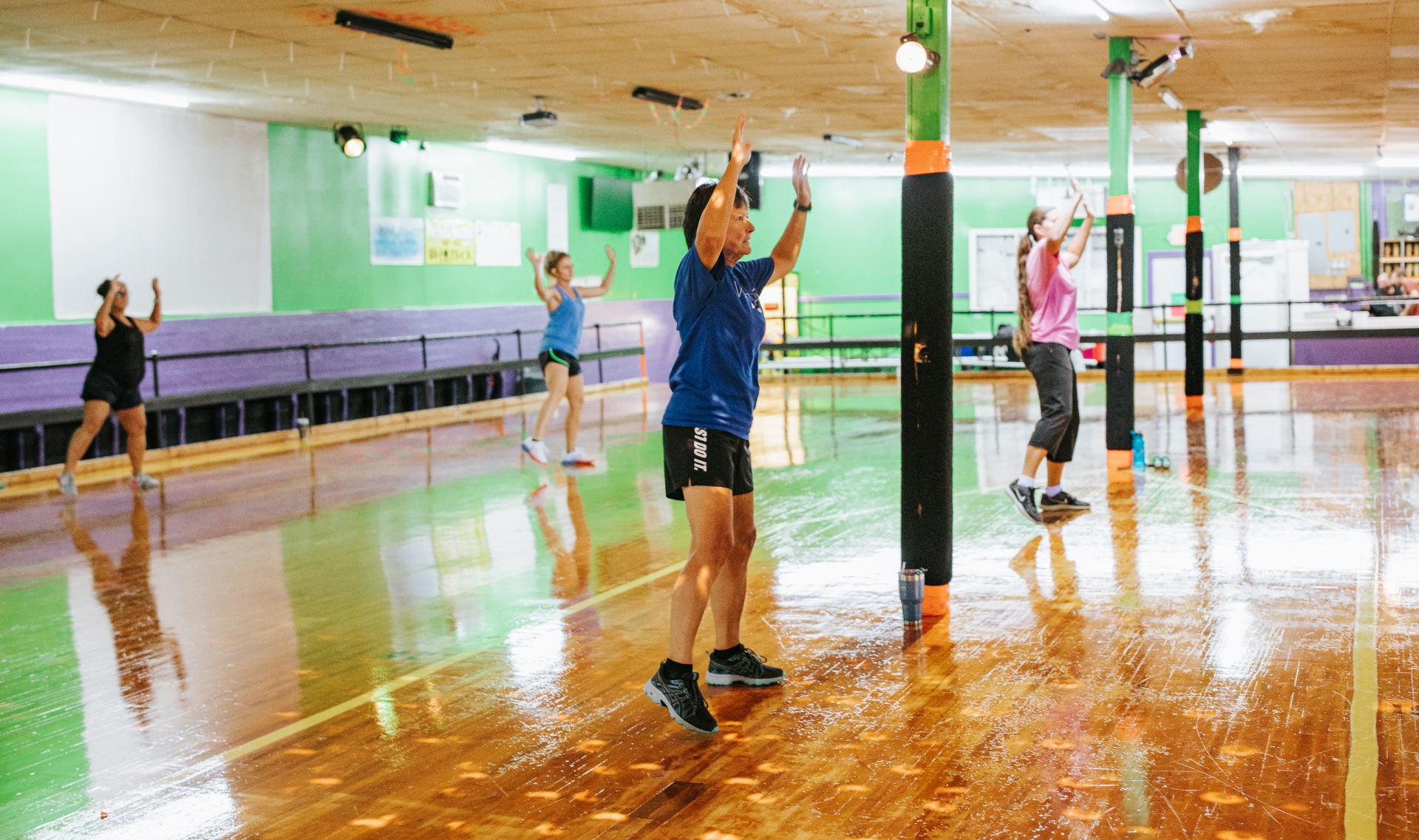 When she’s not skiing, Karen’s been able to stay active with weekly Zumba classes.

Karen was back to barefoot skiing within a year—something she believed was impossible not long ago. She credits Dr. Duncan and UK HealthCare with saving not only her knee, but her ability to do the things she loves. She’s begun convincing others that if they need an orthopedic surgery, the worst thing they could do is wait.

“One of our friends barefoot skis and he has skied forever. He was on a show ski team in his younger years, and now he’s having trouble with his [knee],” Karen said. “I told him, ‘Stop putting it off. Go get it done.’ It’s the best move that I’ve made. The cortisone shots were just temporary relief. This was the ultimate fix.” 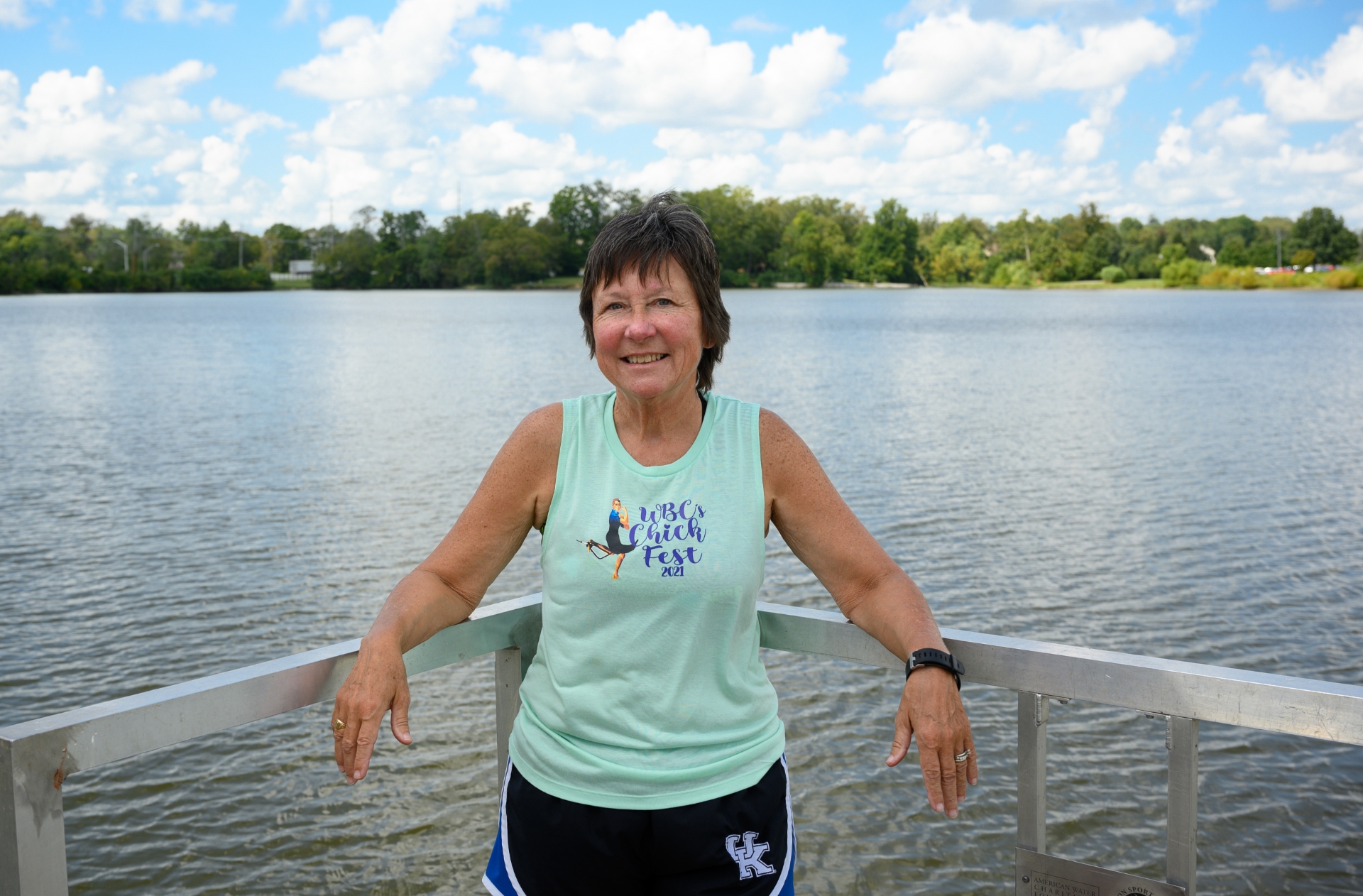 “There’s no reason to be in pain.”Orthopaedics