“[My grandfather] said, ‘We’re going to have the most important conversation of your life. We’re going to come up with five goals, and you’re going to put these on your mirror, so every day when you brush your teeth, you’re going to be reminded of your goals.’ I had those on my mirror my whole high school career. To this day, I’ve got all my goals written on my mirror.” 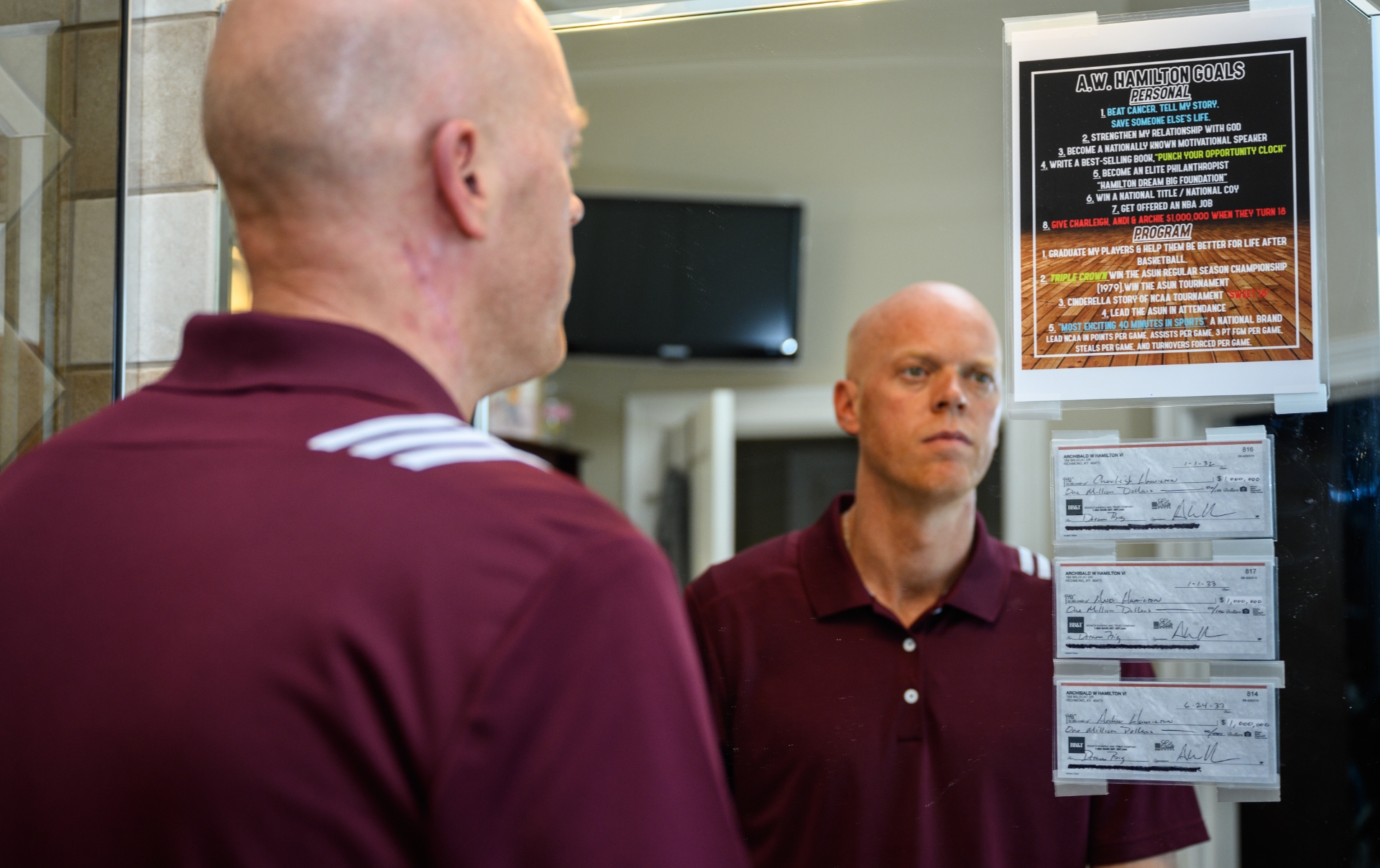 “Writing my goals down on my mirror really has shaped my life,” said Coach Hamilton.

At the age of 40, A.W. Hamilton, head basketball coach of Eastern Kentucky University, has accomplished a lot when it comes to reaching his goals. In six years as head coach of Hargrave Military Academy and entering his fourth season at EKU, he has compiled a 288-64 record. Two of his former players were selected in the 2015 NBA Draft. At EKU, he has guided the program to a historic turnaround since arriving in 2018. Under his leadership, the Colonels have broken 19 school records, highlighted by 15 conference wins this past season – the most in school history. On top of it all, Hamilton was named the Ohio Valley Conference Coach of the Year and National Association of Basketball Coaches (NABC) District 18 Coach of the Year in 2020.

And he isn’t done yet. He has three million-dollar checks on his mirror, one for each of his children when they turn 18, and he wants to start the largest charity foundation in Kentucky. 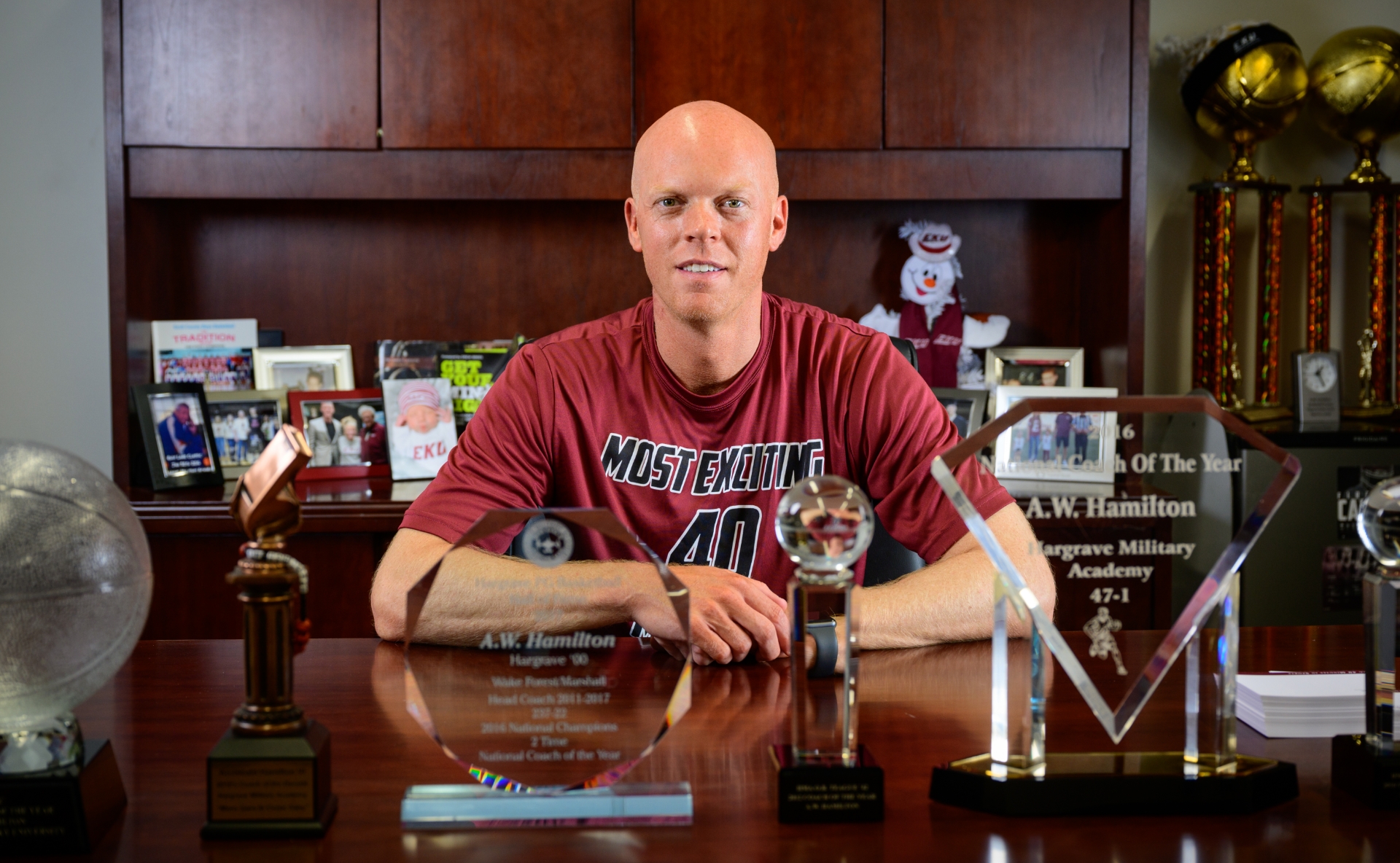 “I've got all this crazy stuff that I want to accomplish,” said Coach Hamilton.

But when Coach Hamilton was unexpectedly diagnosed with melanoma in 2020, he didn’t know what to make of his mirror of goals. Suddenly they seemed unattainable.

“I’m thinking to myself, ‘How am I going to accomplish all this?’” he said. “I got into a really dark place because I wasn’t sure what was going to happen to me, if I was going to be able to do the things that I set out to do.” 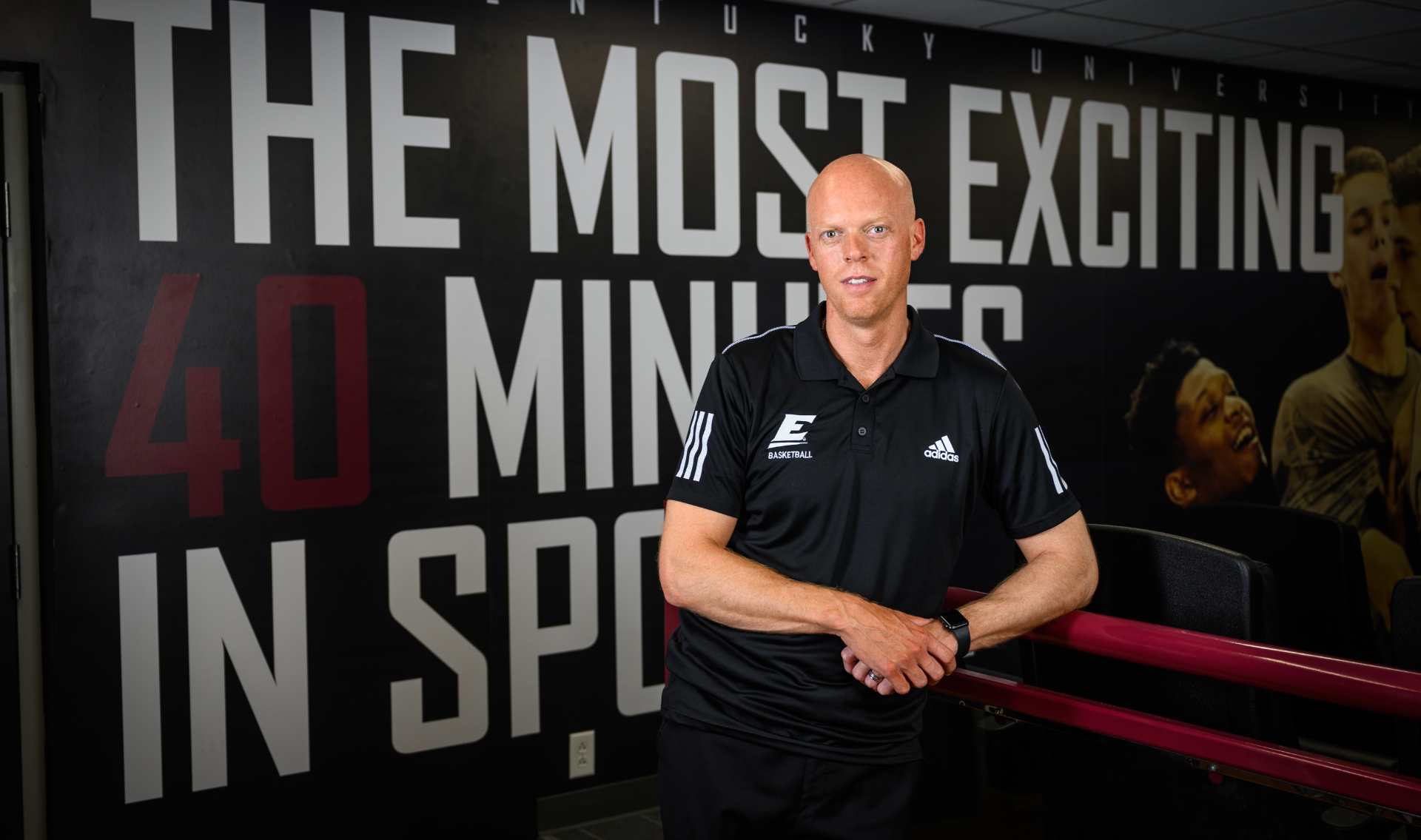 “I had to take a different mindset,” said Coach Hamilton. “I couldn't go in there thinking everything’s over.”

His diagnosis came after his brother-in-law had a stroke—a wake-up call that inspired Coach Hamilton to go get a physical for the first time since 2004. While all of his tests came back normal, there was a small mole on the back of his ear that his doctor sent off for a biopsy. Both he and his doctor assumed it would be nothing. But that wasn’t the case.

“Dr. de Castro [my dermatologist] called me and he was like, ‘Look, I am shocked to tell you this, but you’ve got at least Stage II melanoma.’ He told me the tumor was rooted in my ear and to expect a call from an oncologist at UK HealthCare.” 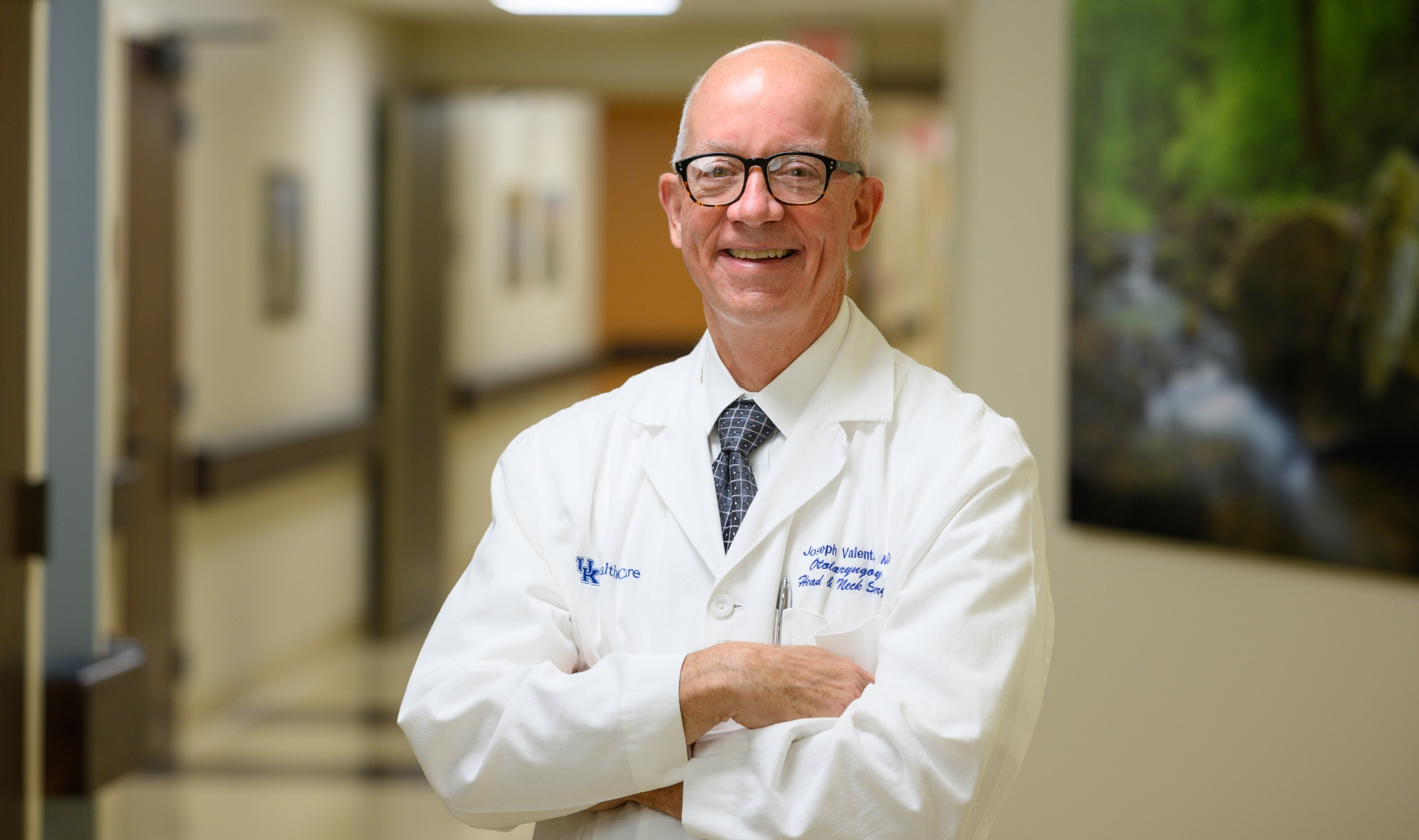 “He [had] the good fortune of having somebody say, ‘I don't like the way that looks,’” said Dr. Valentino.

Within two days, Coach Hamilton was sitting in the office of Dr. Joseph Valentino, an oncology head and neck surgeon at UK HealthCare’s Markey Cancer Center. “I was freaking out,” said Coach Hamilton. “I had a cousin who died of melanoma when I was 13. But I was like, ‘You know what? I’ve got to regroup here.’ So I made a new goal: to beat cancer, tell my story, and save somebody else’s life. And I had to get my mind wrapped around that—no matter what happened and what I’m going to face, that I’m going to beat this. I’m going to get the word out how somebody saved my life, and try to help somebody else.” 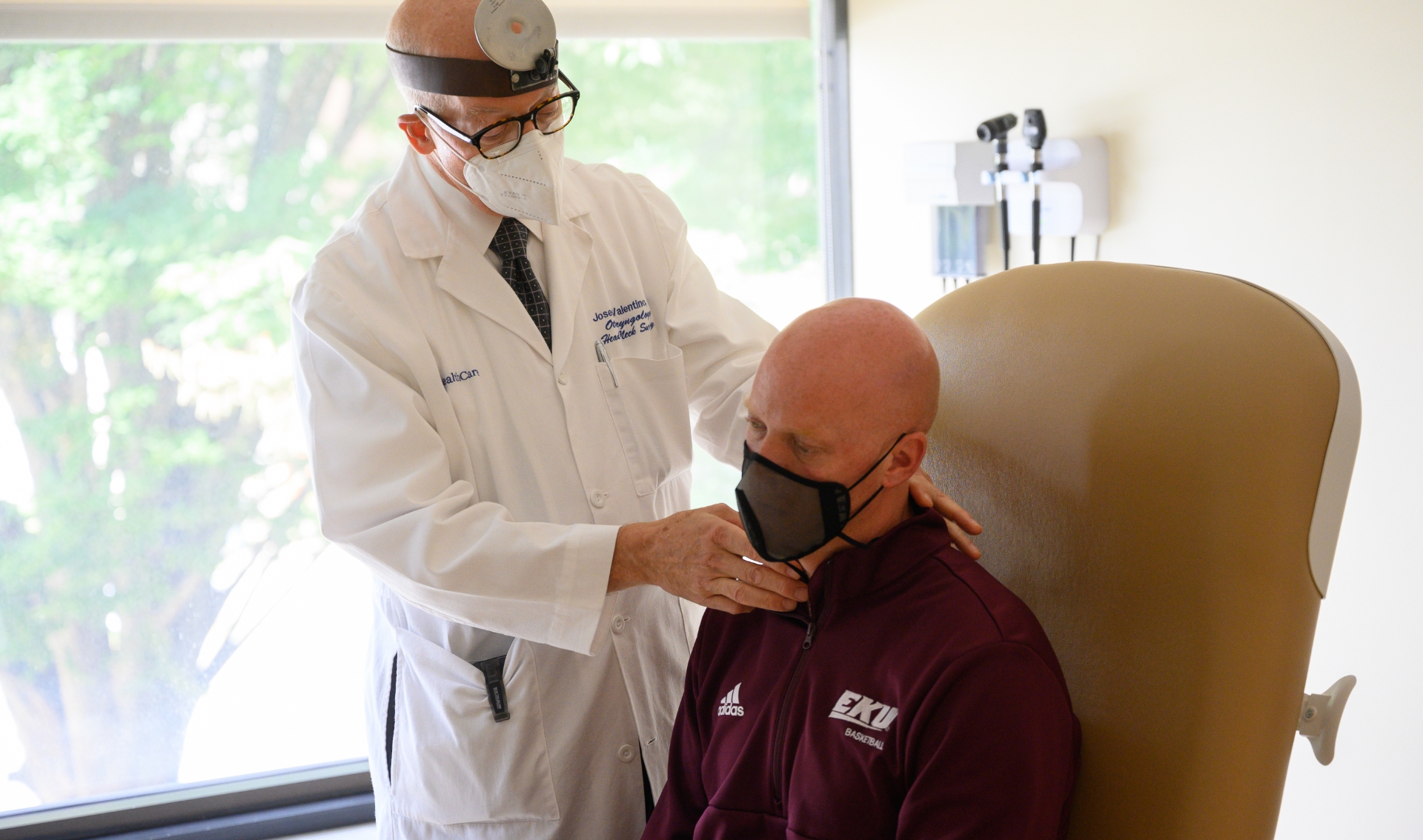 "[Dr. Valentino has] been above and beyond," said Coach Hamilton.

The somebody who would help save his life was Dr. Valentino. He discovered that the mole on Coach Hamilton’s ear had intermediate thickness, meaning the cancer had a chance of spreading throughout his body through lymph nodes and blood vessels. He gave Coach Hamilton a PET scan to see just how much the cancer might have spread before recommending a treatment plan.

“Melanoma, unlike other malignancies of the skin, is one that most dermatologists will refer if it has any depth of invasion because of the risk of its spread,” said Dr. Valentino. “That process is called metastasis, and we see metastatic spread of melanoma far more commonly than some of the other more common skin cancers.” 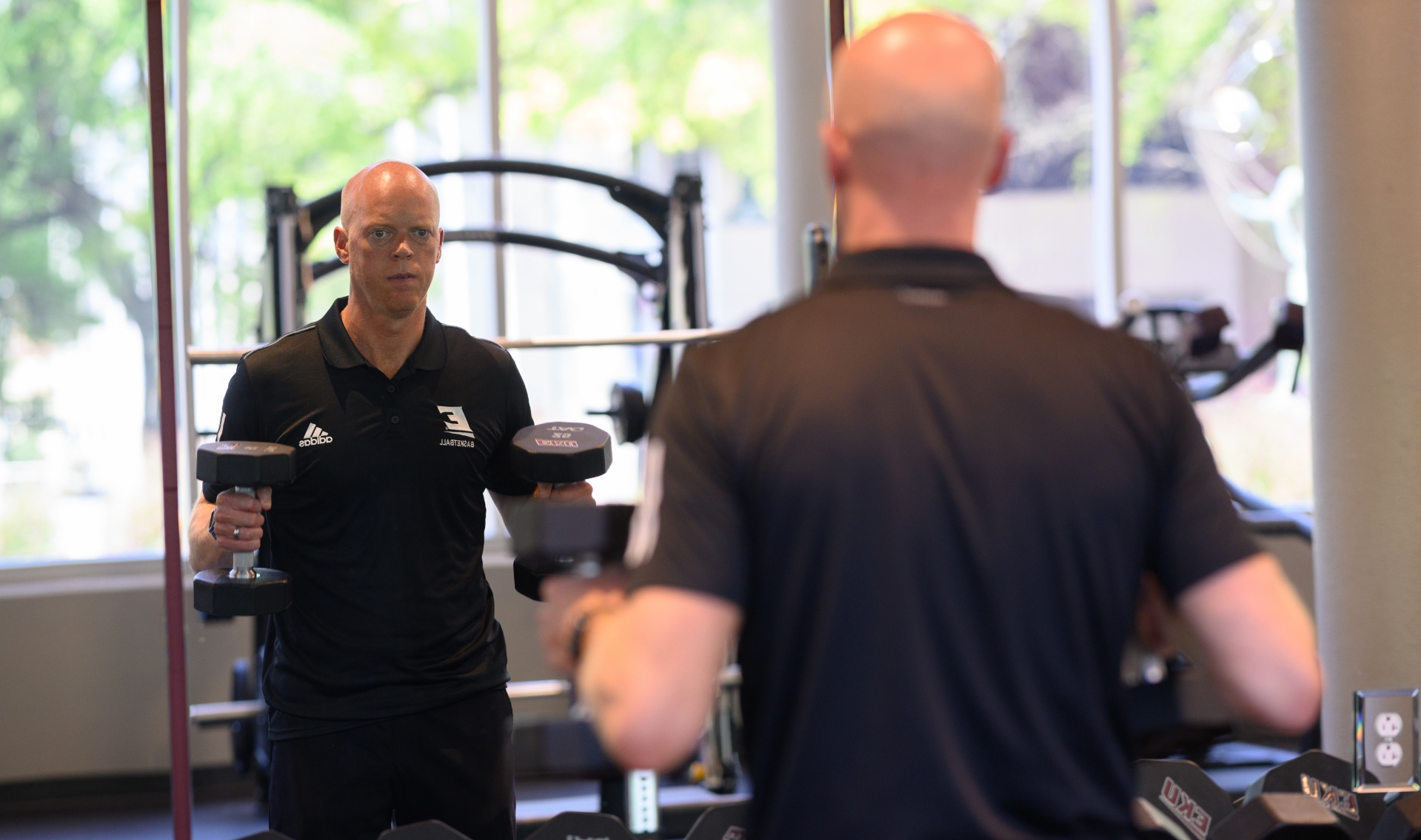 “I work out three or four times a week,” said Coach Hamilton. “I never thought twice about a physical.”

Thankfully, the cancer hadn’t spread throughout the body, so Dr. Valentino and his team were able to take a surgical approach to remove the tumor and several surrounding lymph nodes—the best-case scenario for Coach Hamilton. During the surgery, his ear was taken apart and put back together. Surgeons removed some of his lymph nodes and parts of skin from his neck. The process left a four-inch scar, and Coach Hamilton has little to no feeling on the right side of his face—but the surgery was successful, and he says he’s just glad to be cancer-free. 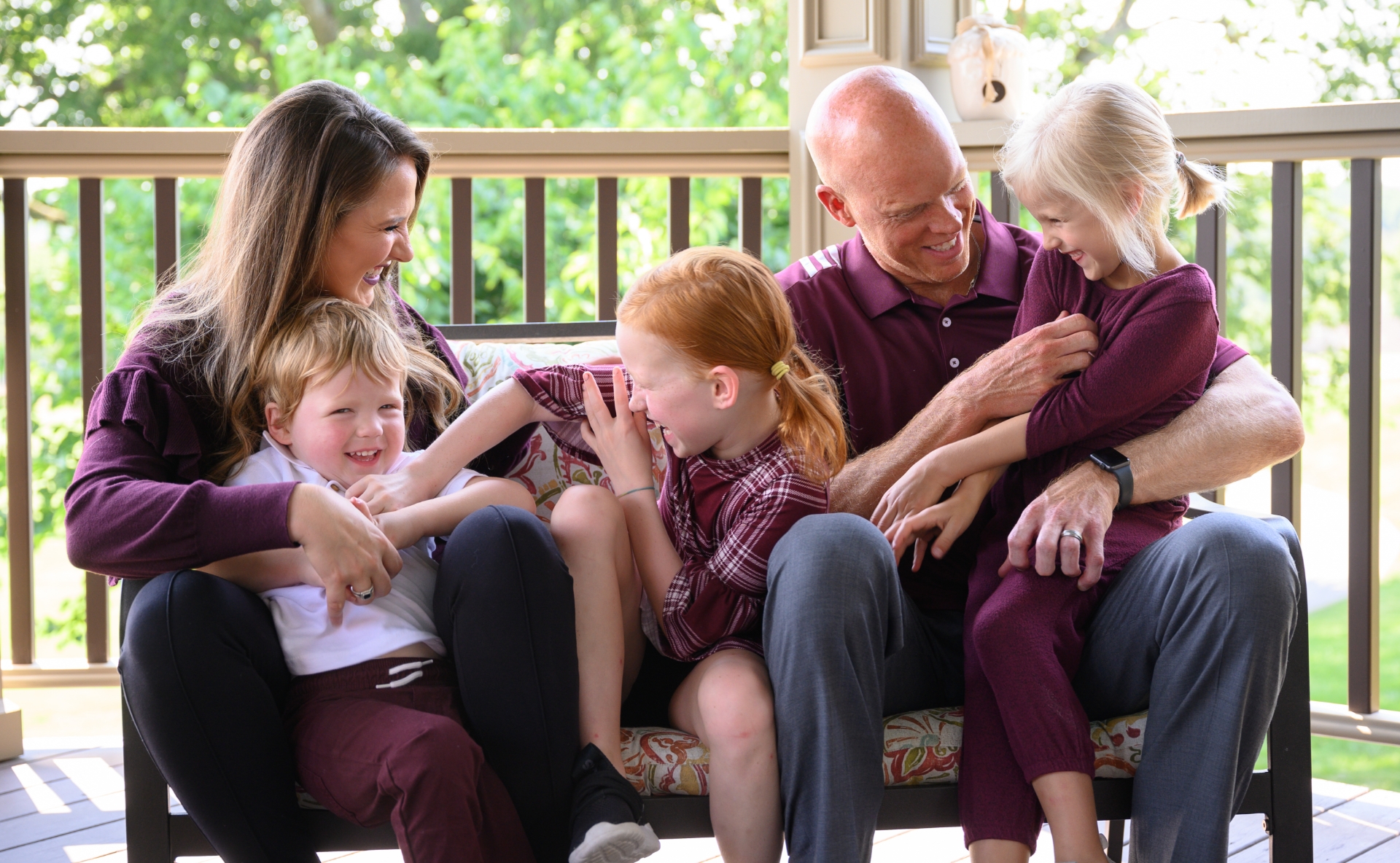 “I want to raise my kids, I want to love my wife,” said Coach Hamilton. “ I want to keep this thing going.”

Today, Coach Hamilton sees Dr. Valentino every few months to get CAT scans to ensure the cancer is gone and no other types of skin cancer have occurred. Dr. Valentino says he’ll need five years of visits with no issues, then Coach Hamilton’s visits will be scheduled further apart. Still, it’s likely Coach Hamilton will have regular cancer screenings by his dermatologist for the rest of his life.

But now that Coach Hamilton has been cancer-free for a year, he’s back to focusing on the goals on his mirror at home. He’s even added some new ones—specifically, he’s determined to share his story with as many people as possible and encourage them to go to the doctor regularly. 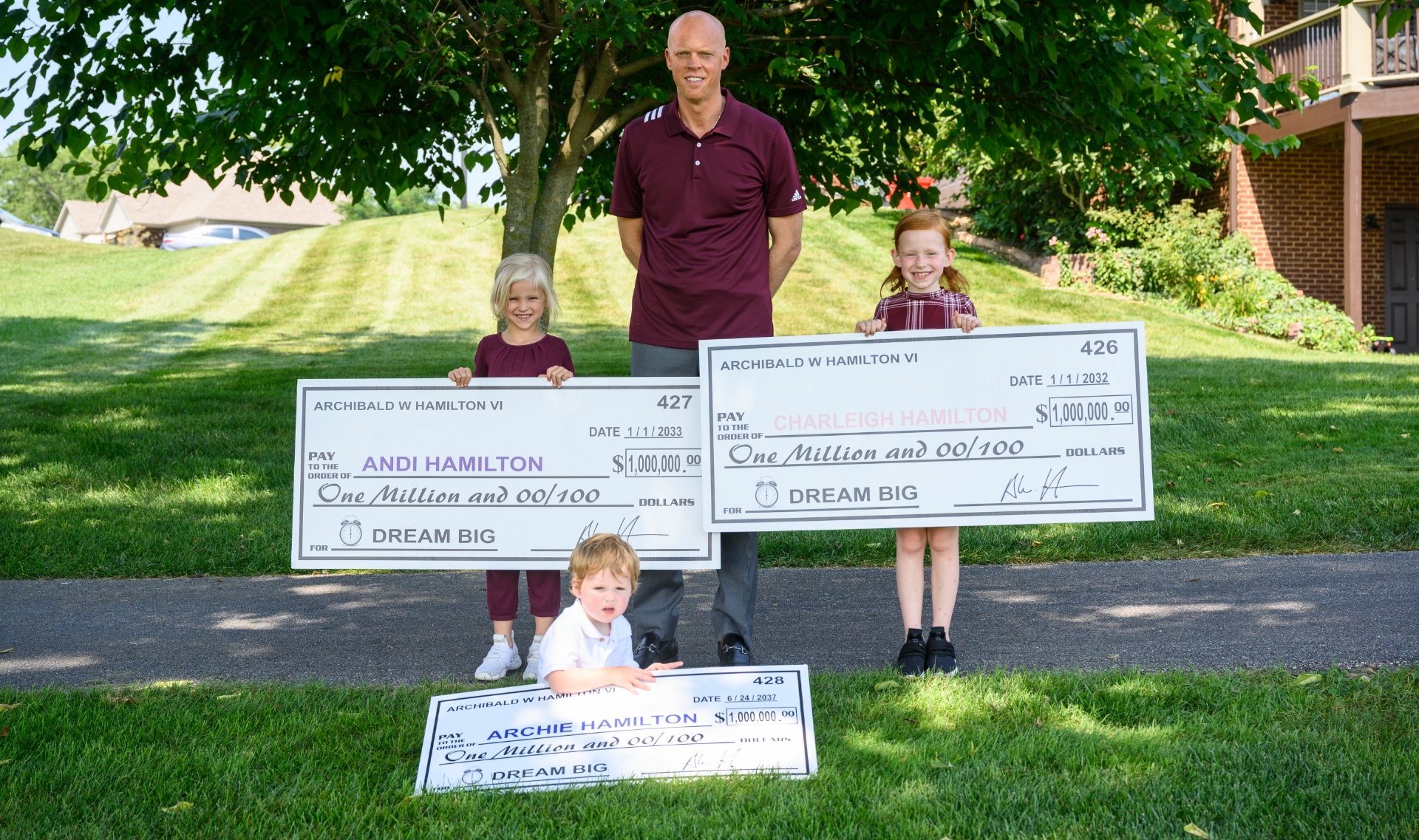 “I want [my kids] to have the best life they can possibly have,” said Coach Hamilton.

“When this happened to me, I was 39 years old. I work out three or four times a week. At that time, I was running over a mile a day. I was healthy,” he said about his life pre-cancer. “So, my message is: if this can happen to me, it can happen to you. I had a mole that looked like just a regular mole, it was behind my ear, and it was out of sight, out of mind. So, I just want to emphasize to slow down and go do the little things that you probably should do, the simple checkups. I’m a once-a-year physical guy now.” 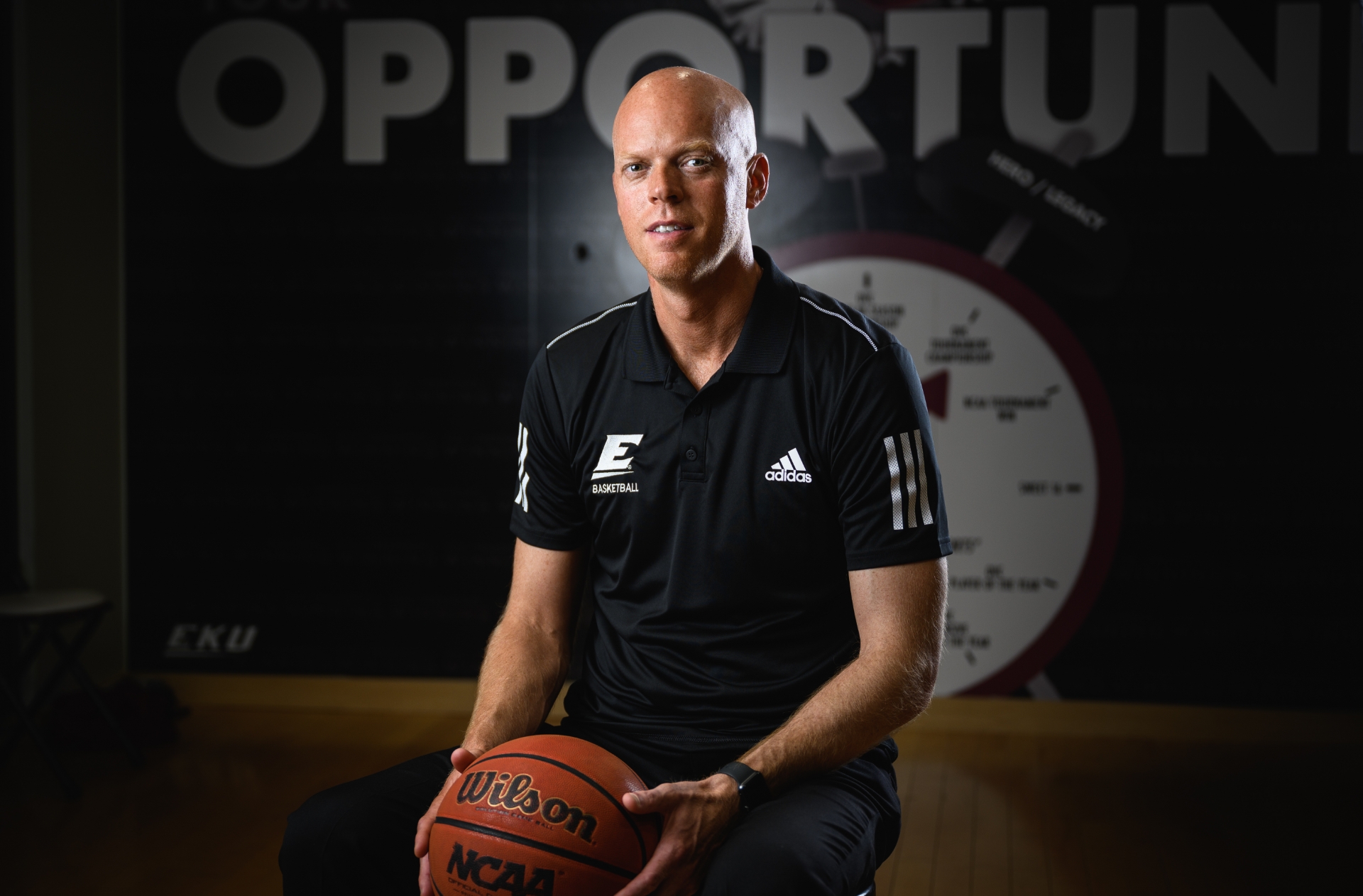 “Every day is a blessing,” said Coach Hamilton.

See how we care for patients like Coach Hamilton

“This is genetic. It’s not random.”Cancer