When Elizabeth Barr (E, as she’s known to everyone), started to feel a pain in her abdomen in March 2017, she had no idea that it was the beginning of a four-year roller coaster ride that would nearly kill her—and an incredible recovery that would lead her doctors to nickname her Lazarus. 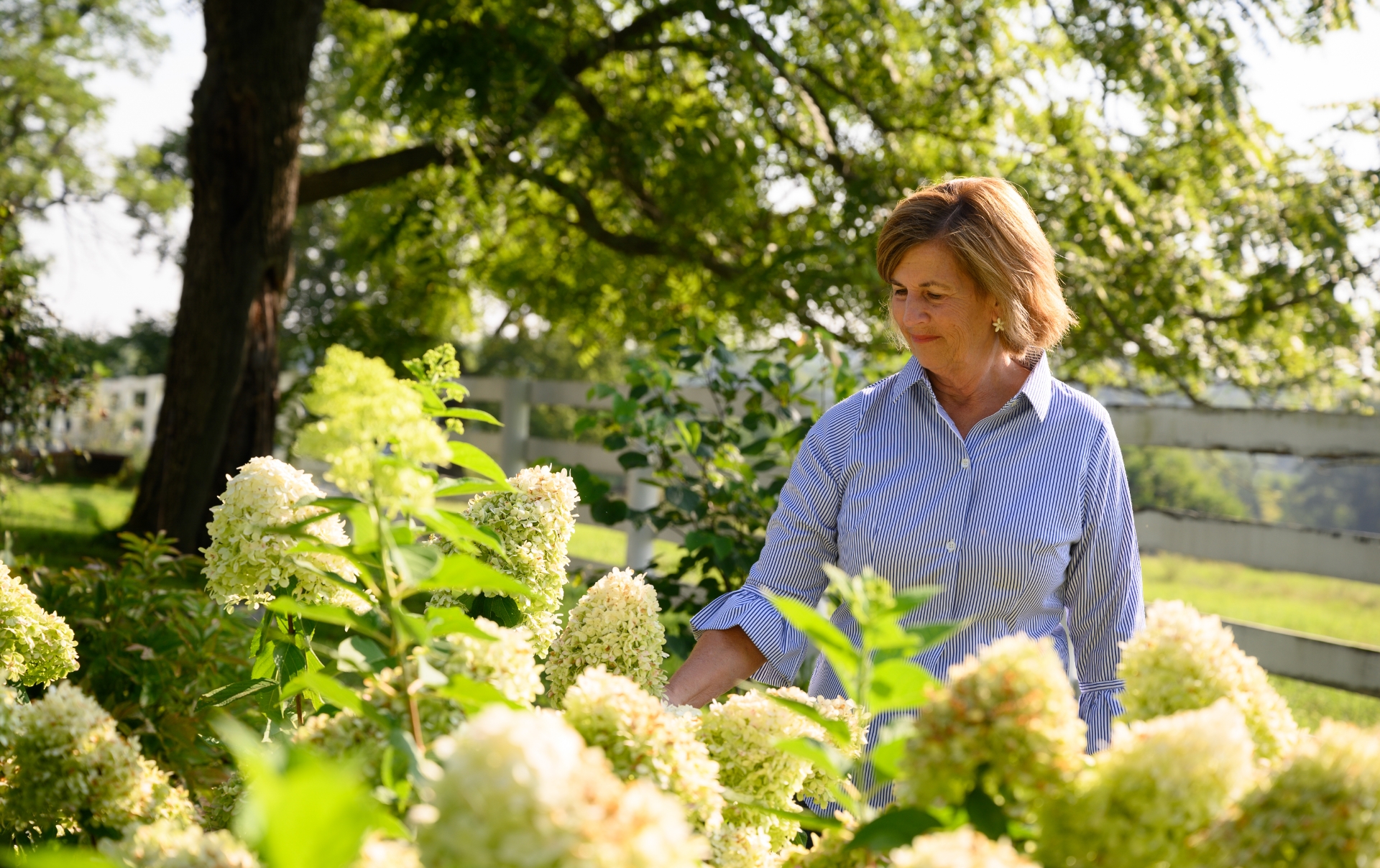 When the pain spread to her pelvis, she visited a urologist to rule out a UTI, then underwent a colonoscopy. She sailed through both appointments with flying colors, but the pain continued to intensify. During another exam, E’s gynecologist felt something unusual and referred her to UK HealthCare, where she met with Dr. Fred Ueland, Chief of the Division of Gynecologic Oncology at Markey Cancer Center, who recommended surgery to confirm E’s diagnosis. Following the surgery, Dr. Ueland shared the news with E and her husband Cary: E had a malignant ovarian tumor. 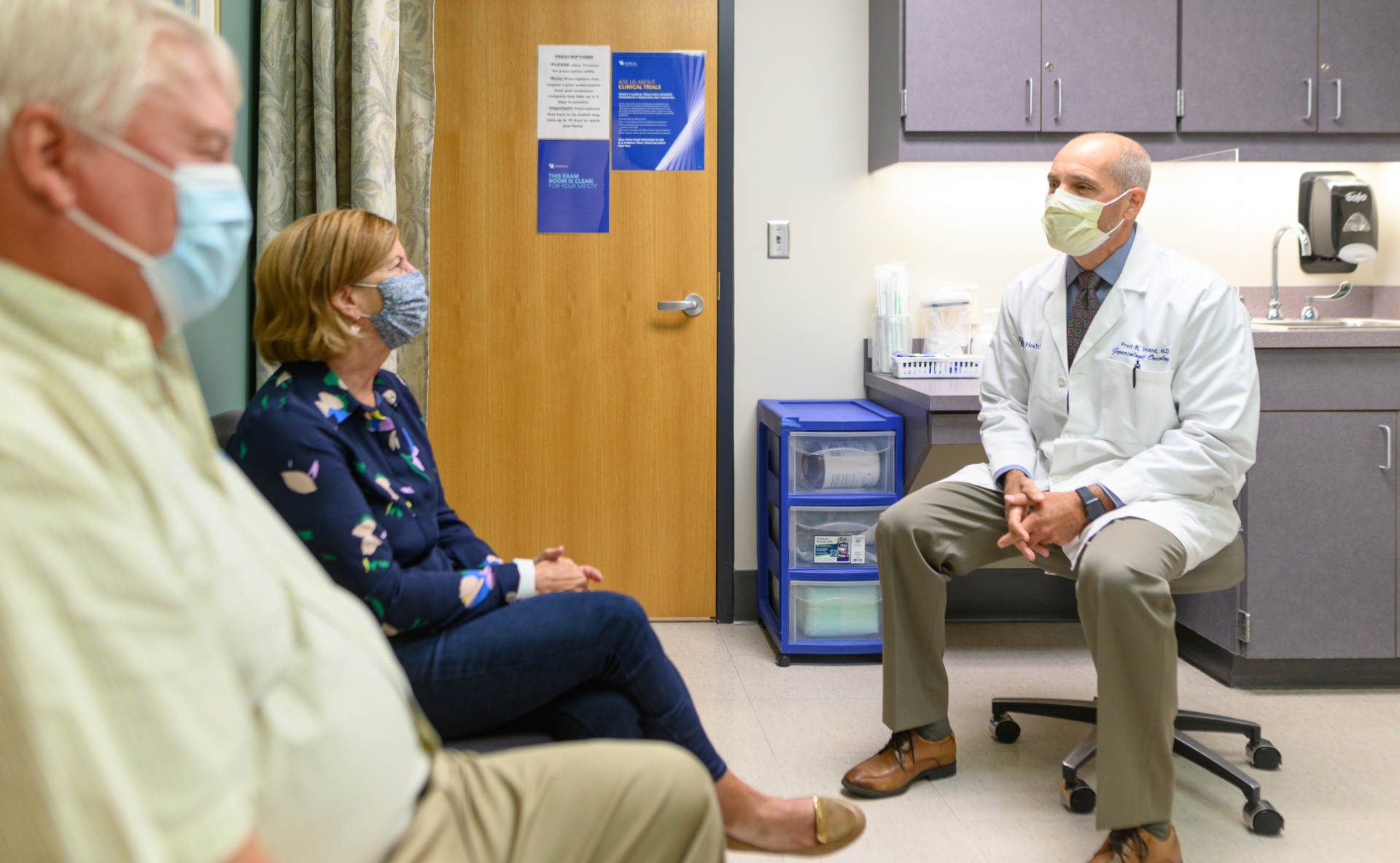 “I was glad I got Dr. Ueland that first time, because our sons played soccer together,” said E.

E has a complicated health history: she was born with only one kidney and, in her 20s, had an ovary removed due to a non-cancerous tumor. Because of her medical history and the aggressive nature of E’s cancer, Dr. Ueland and his team removed E’s remaining ovary and uterus as well as a portion of her colon. The surgery was followed by ten grueling hours of chemotherapy every three weeks. 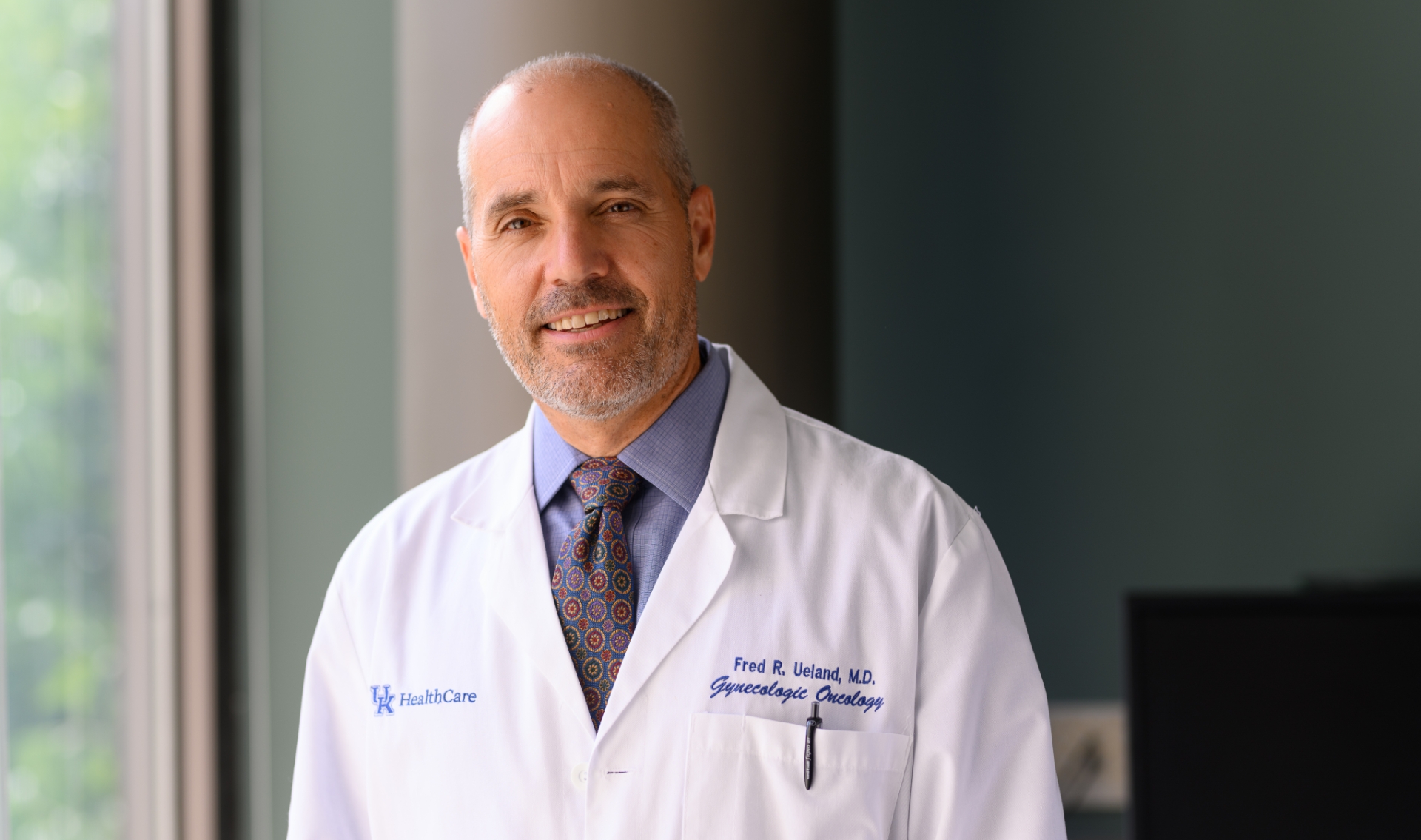 “We were happy to go,” said E. “We looked forward to it because we got to know those nurses, doctors, and staff, and they became like family.”

Even though she was ill from the chemotherapy side effects, the end of her treatment regimen was in sight by late fall 2017. E even ziplined with family on Thanksgiving weekend to celebrate getting through chemotherapy—never dreaming that more bad news was right around the corner. 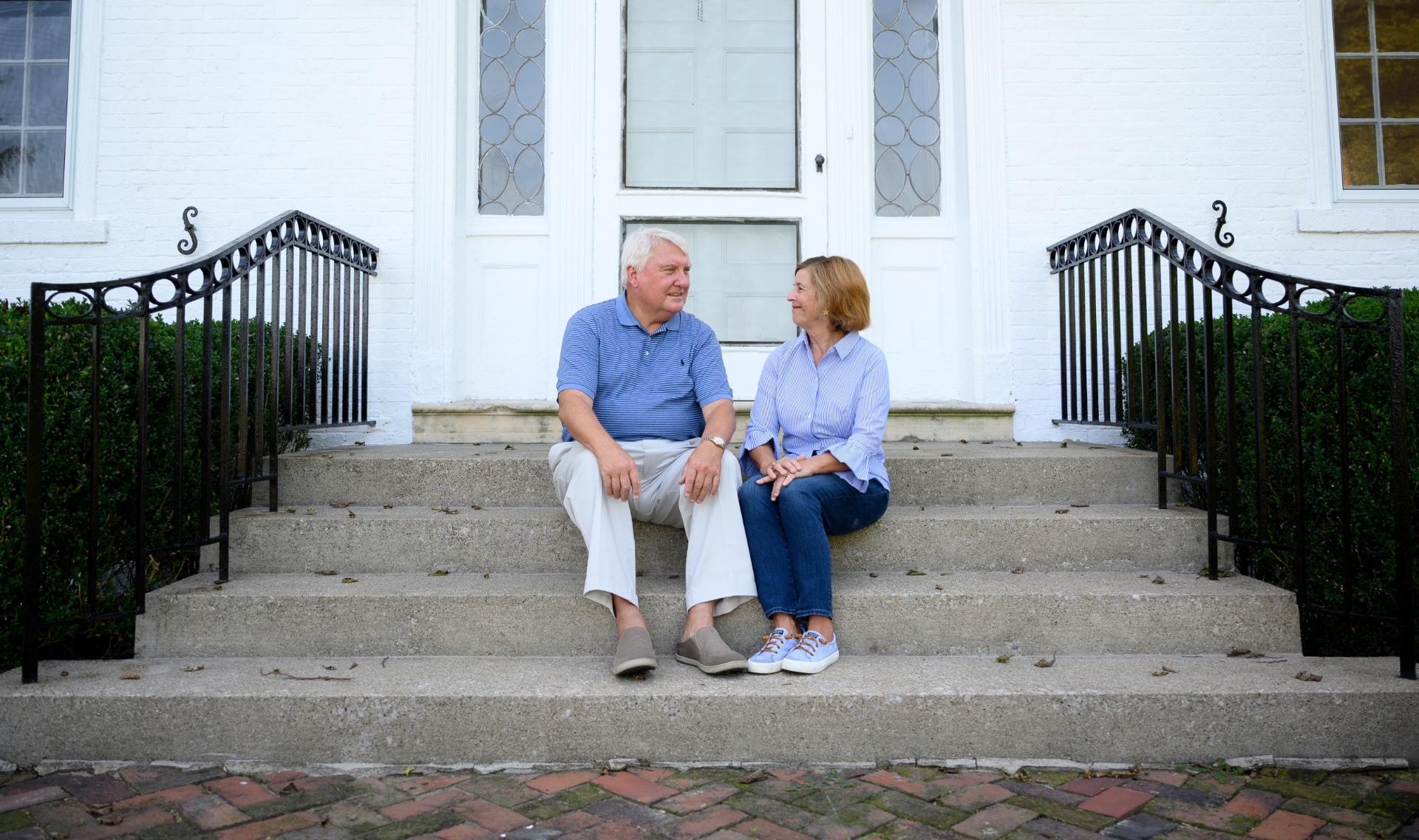 “We were high school sweethearts,” said E. “We’ve been together for a long, long time.”

“I thought, okay, we’ve done all this chemo, it killed it, I feel good and now we’re moving on,” said E. “But in hindsight you go back and look and it’s like, oh, [the cancer] was [still] there. Sure enough, I started having pain again.”

In January of 2018, shortly after completing chemo, E’s pain returned. By February, a scan confirmed that her cancer was back, this time in a different part of her colon. E and Cary met with Dr. Avinash Bhakta, a colorectal surgeon at UK HealthCare, to undergo a minimally-invasive laparoscopic right colon resection, and the team felt confident they had removed all recurrent tumors. But the Barr family’s relief was short-lived: in May 2018, E’s pain returned. A PET scan revealed more disease in her abdomen, and she began having severe gastrointestinal bleeding. E was sicker than ever, and started to feel like she was running out of options. 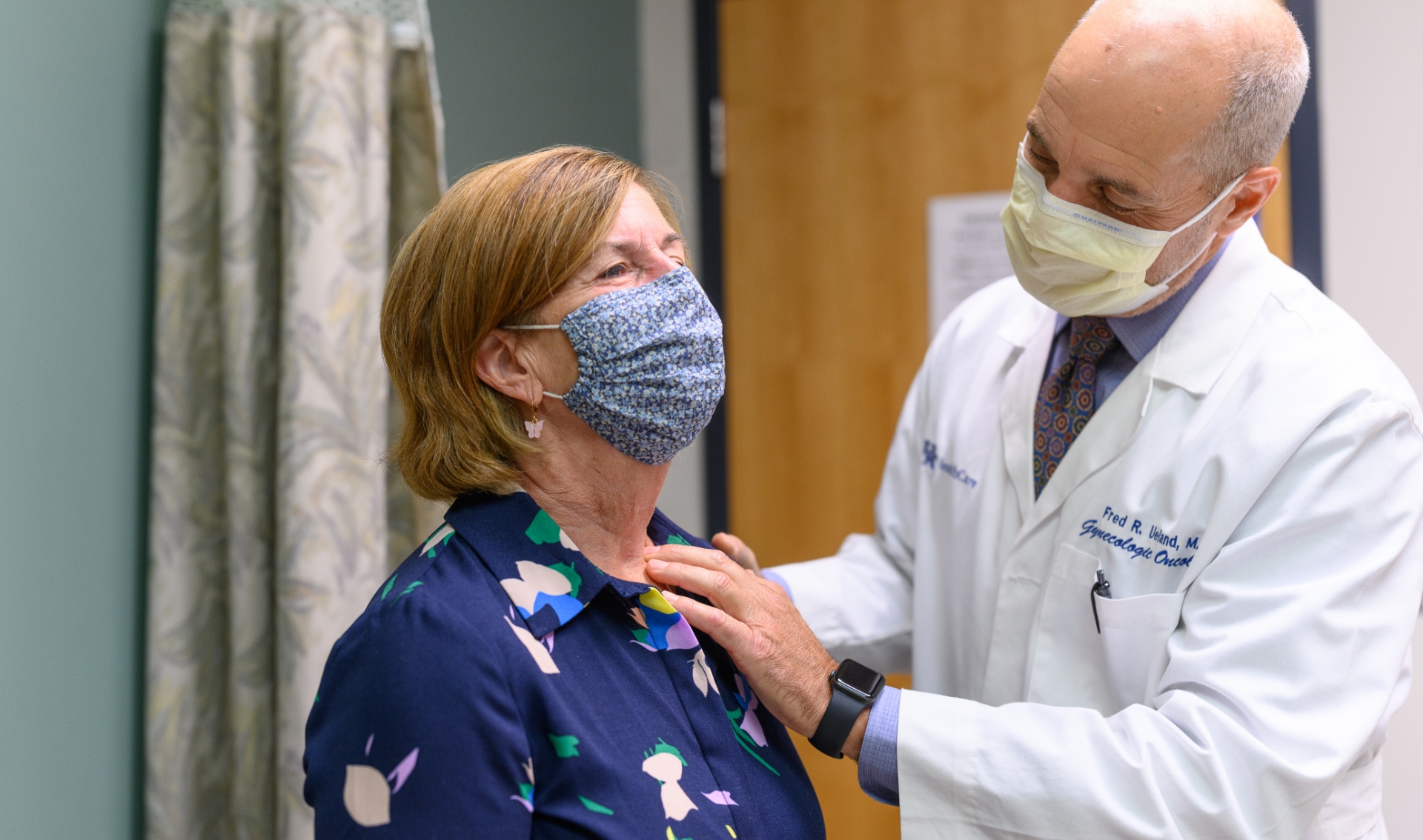 “They called and said, ‘Dr. Ueland thinks you need to come to the emergency room and get a blood transfusion.’”

“She was down to 88 pounds,” said Cary. “The team was so worried that they put her in the hospital. I had to push her in a wheelchair and she was so weak that she couldn’t sit up.”

E began a series of blood transfusions to strengthen her body, and was referred to Dr. Mark Bernard for radiation treatments to the abdomen to treat the cancer and, hopefully, stop the bleeding. The palliative care team came in to speak to E and Cary, but with their first grandson due to arrive in two months, E was only interested in one thing. 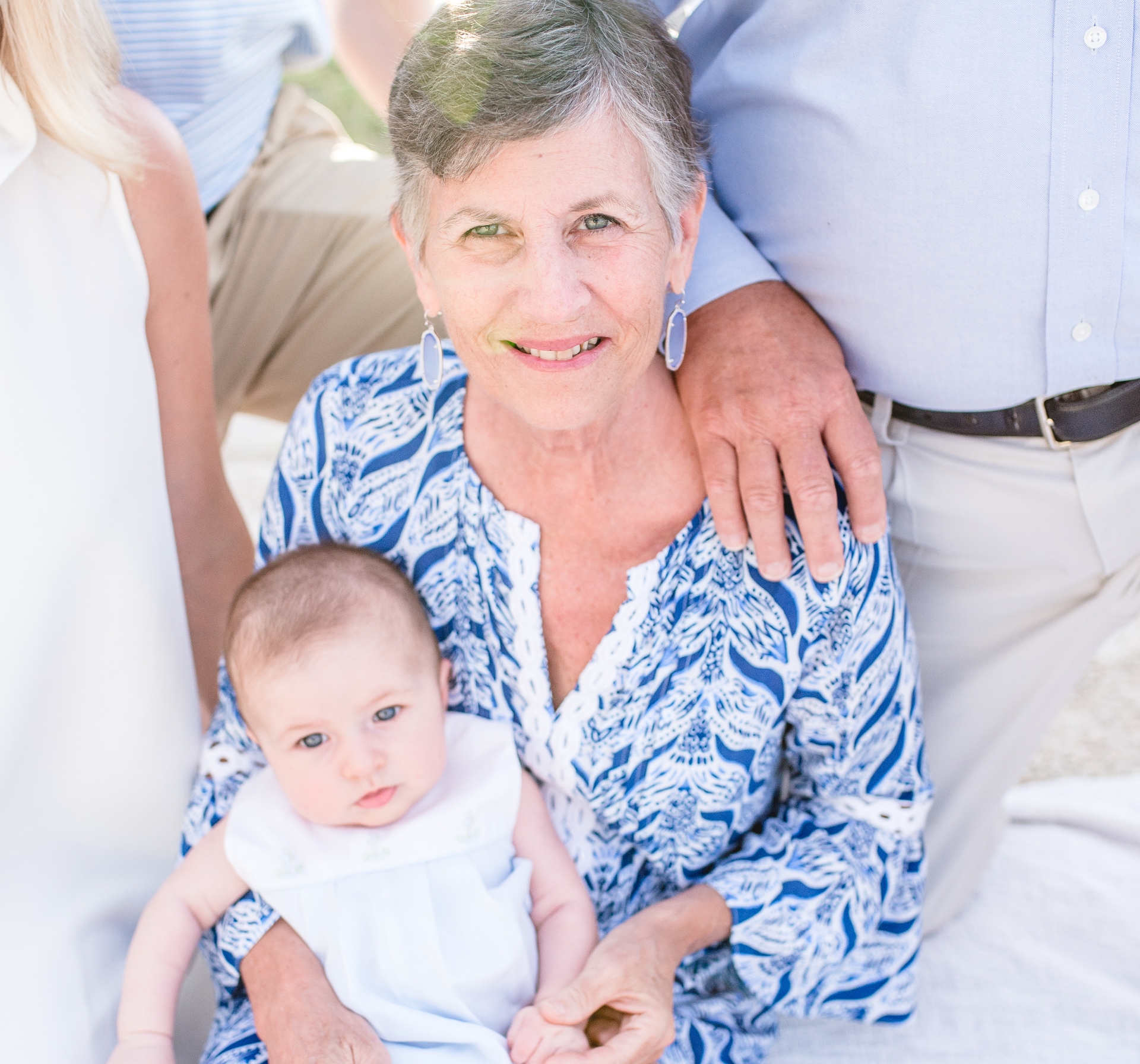 “It helps to set goals, because then you can just keep putting one step in front of the other,” said Dr. Ueland.

“I just wanted to live long enough to see my first grandchild who was due on my birthday, June 30th,” said E. “They were talking about quality of life and I’m going, to hell with quality of life, I just want to be here to see this baby. Whatever it takes.”

E came home from the hospital in early June, weak from radiation and on a liquid diet from the tumors partially blocking her intestines, but determined to make it through. 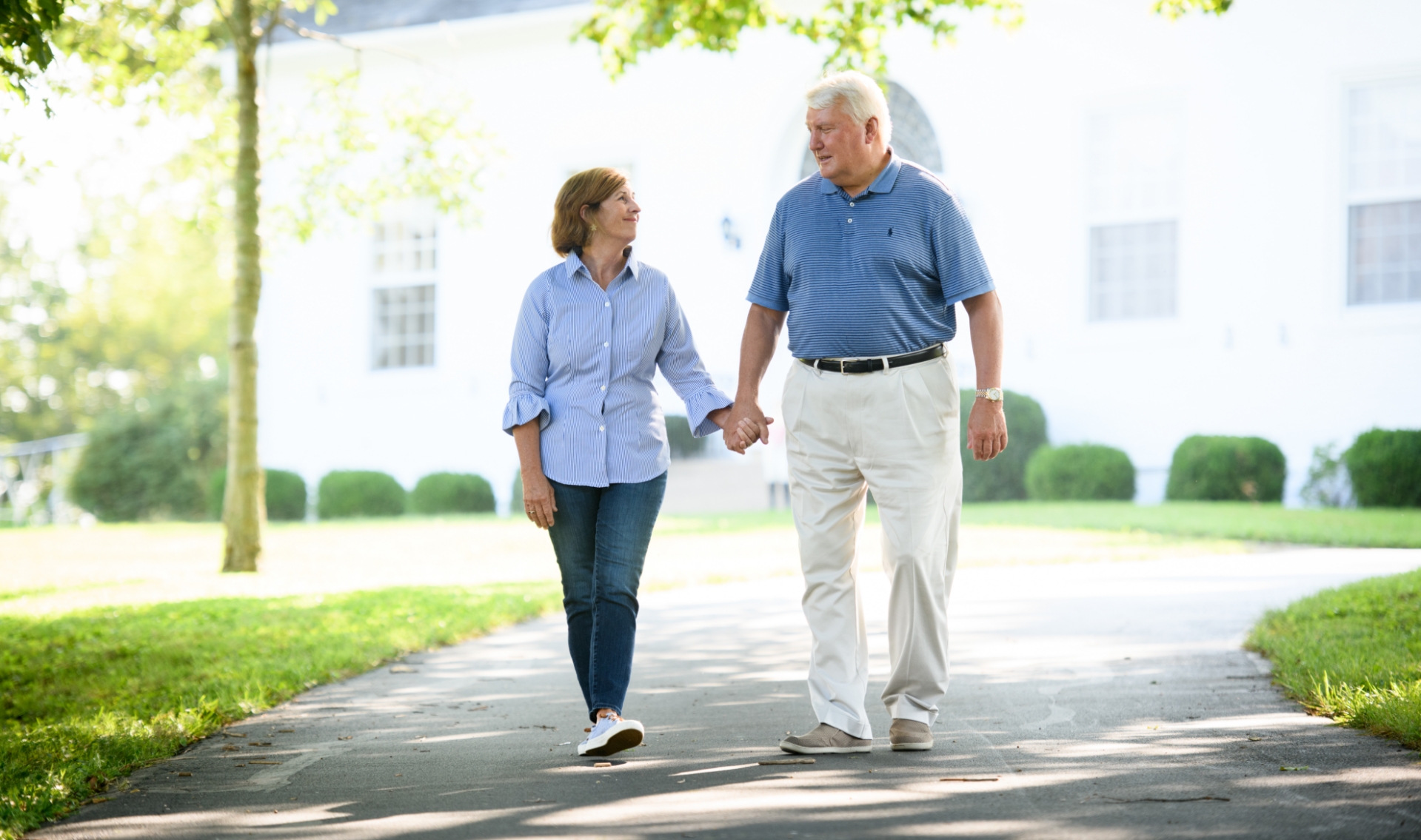 Cary was by E’s side every step of the way, through chemo, radiation, transfusions, and surgeries.

“For the month of June we waited for the radiation to work,” said E. “On July 1, 2018, William Palmer Dycus was born, and I got to see my grandchild the day he arrived. I had to go in a wheelchair, but that didn’t matter. So then I gave Dr. Ueland another goal: that I wanted to be here for my son’s wedding in October 2019. Dr. Ueland said, ‘I like goals.’” 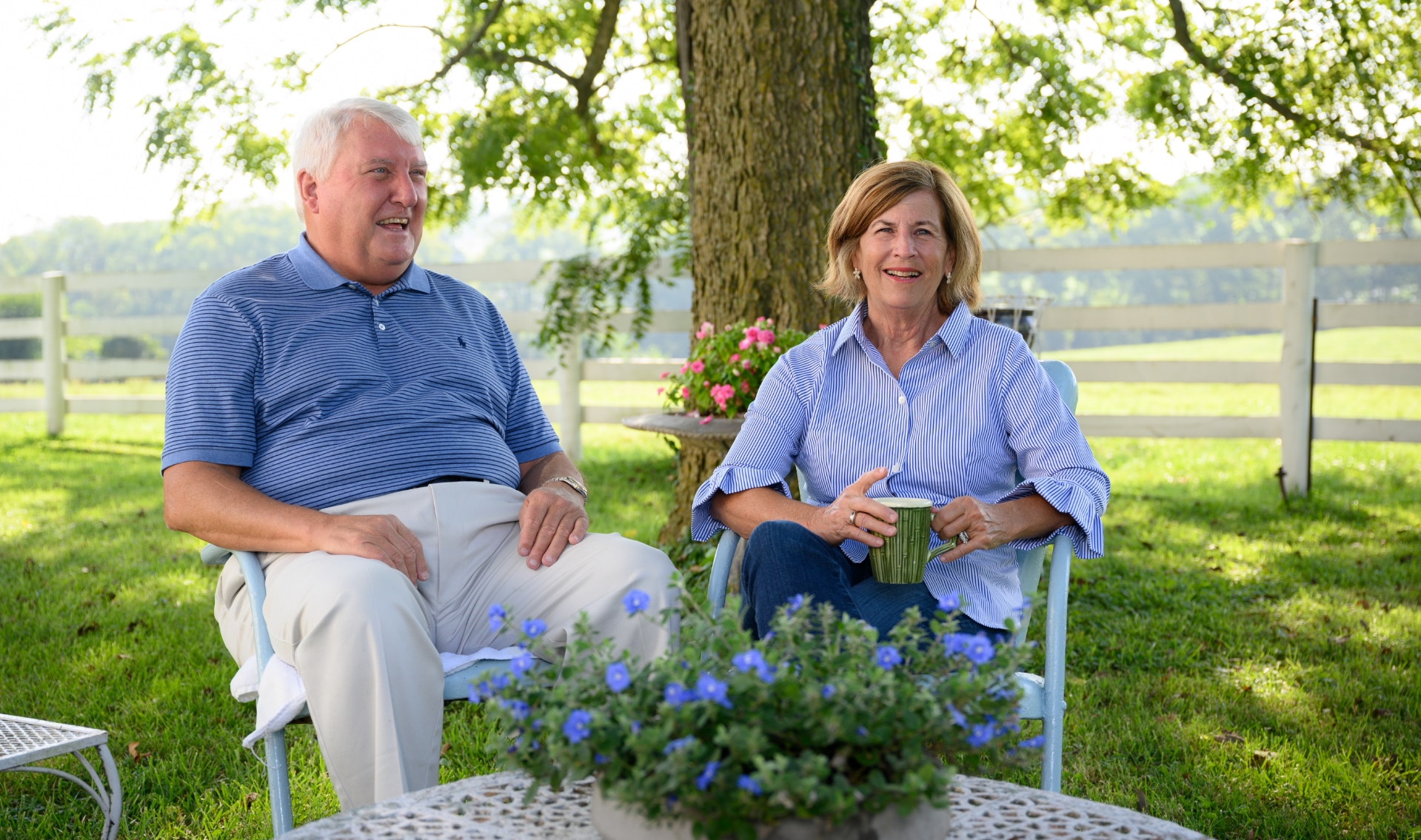 “We tell everybody what a great place [UK HealthCare] is,” said Cary. “And right in our backyard,” said E.

Following the second surgery, Dr. Ueland ordered whole genome sequencing on E’s cancer specimen to look for mutations or abnormal genes in the cancer tissue. This type of precision medicine is a new way to treat cancer, looking for available drugs to target specific genomic mutations in the tumor.

As E recovered at home, the Molecular Tumor Board at Markey Cancer Center—a team of physicians, surgeons, scientists, researchers and pharmacists who specialize in interpreting genomic test results and translating them into personalized cancer treatments—met to review her case. The team focused on a specific mutation in E’s cancer, and recommended a type of immunotherapy called pembrolizumab, which helps the immune system recognize and attack cancer cells. 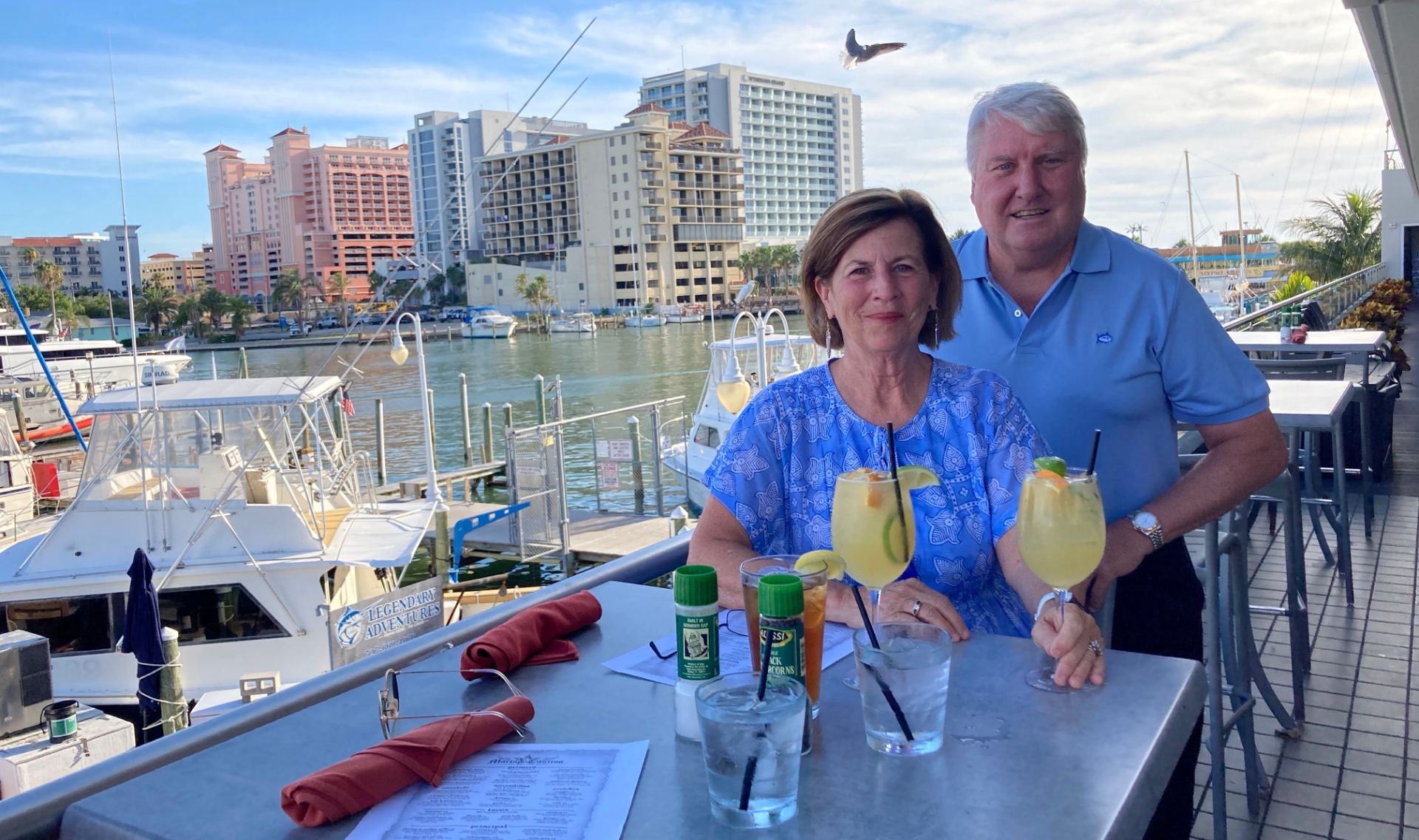 E’s recovery has meant that she and Cary have been able to travel again.

There was nothing in the literature to support the use of pembrolizumab in E’s particular type of cancer, but her team of doctors thought it gave her the best chance to attend her son’s wedding more than a year away—and they were right. After three treatment cycles, E walked into Dr. Ueland’s office and gave him the surprising news that she, for the first time in a very long time, felt normal. Six months later, her scans were cancer-free.

“It just shows how quickly modern medicine is changing,” said E. “If you can just keep fighting and stay alive, you have a good chance that something’s going to come up. You just have to stay with it and stay focused. We were lucky.” 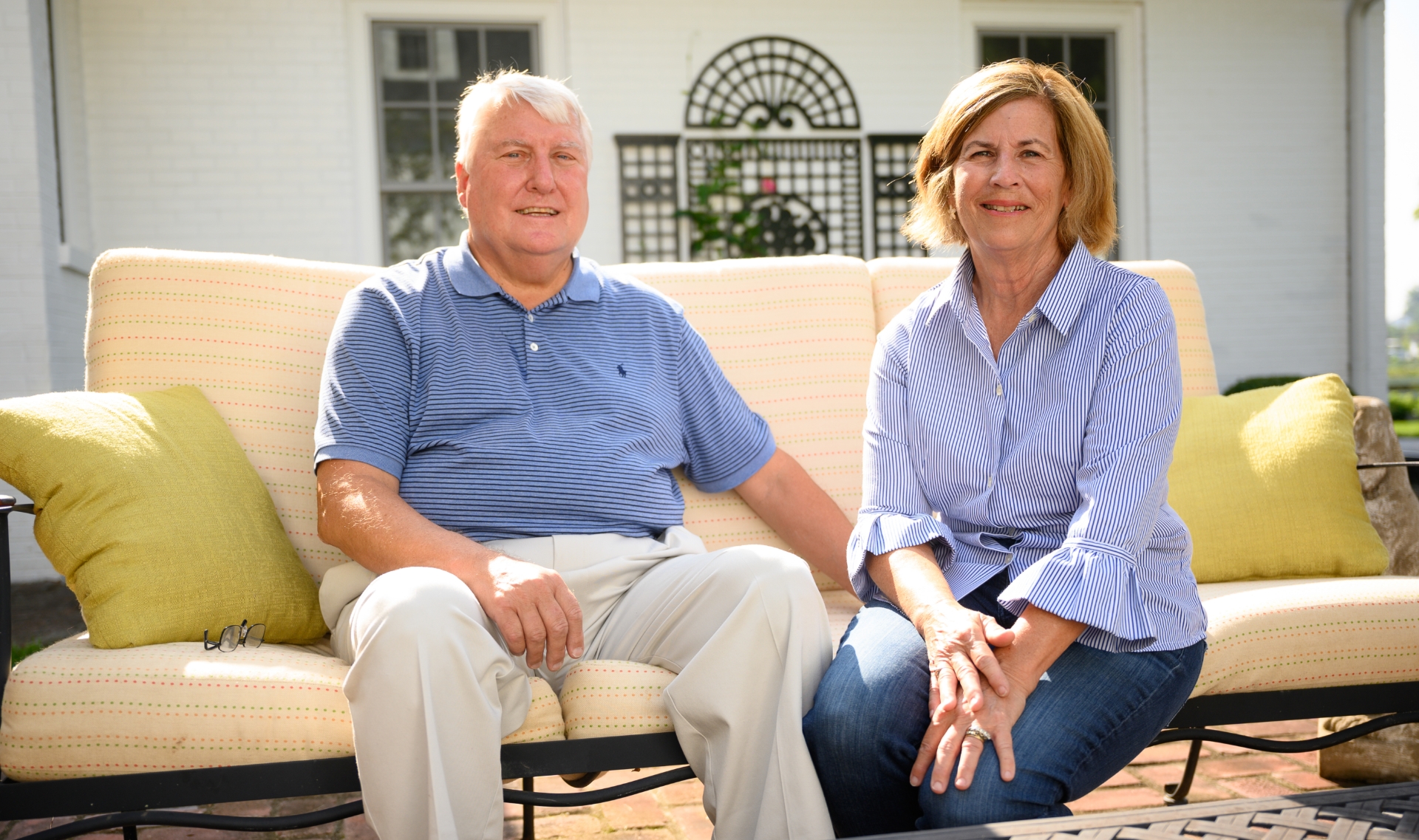 “You’ve got to have the support system,” E said. For her, much of that support came from Cary.

“E is the real leader of this team,” said Dr. Ueland. “She has endured two cancer surgeries, many cycles of chemotherapy, radiation therapy, and immunotherapy all at Markey. It really highlights what the Markey Cancer Center can do: provide individualized, multidisciplinary, and innovative cancer care in a truly personal way.”

Thanks to the Molecular Tumor Board, E received her lifesaving treatment two years before it was widely available for her type of cancer. Today, E has been entirely off therapy for over a year, and is doing well. Her medical team monitors her treatment response following two years of pembrolizumab, and encourages her to keep setting life goals, both big and small. Her journey is nothing short of remarkable, and E credits Markey Cancer Center with giving her a road map to survivorship—allowing her to dance at her son’s wedding, meet her grandchildren, and plan for the future. 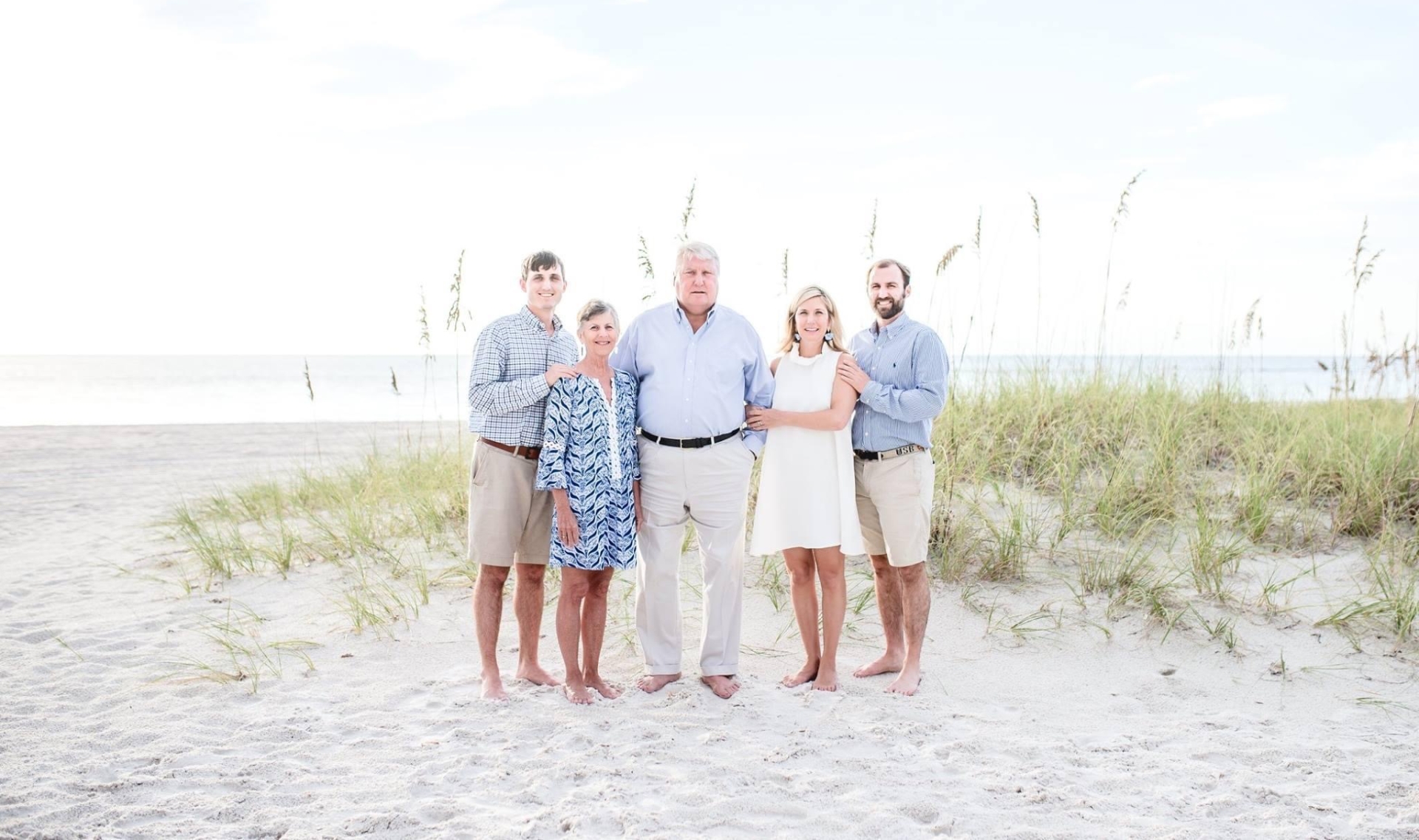 E’s family, including her three children, kept her motivated through her years of treatment.

“At the end of the day, E has had great quality time,” said Dr. Ueland. “She set goals along the way to be present at births, weddings, and other wonderful human moments, and she’s been able to achieve them.”

“Our children—Carrie, Bill and Daniel—were a huge part of keeping my desire to live. I just always needed to know we had a game plan,” said E. “And UK HealthCare did it. They thought outside the box and gave someone like me a chance.” 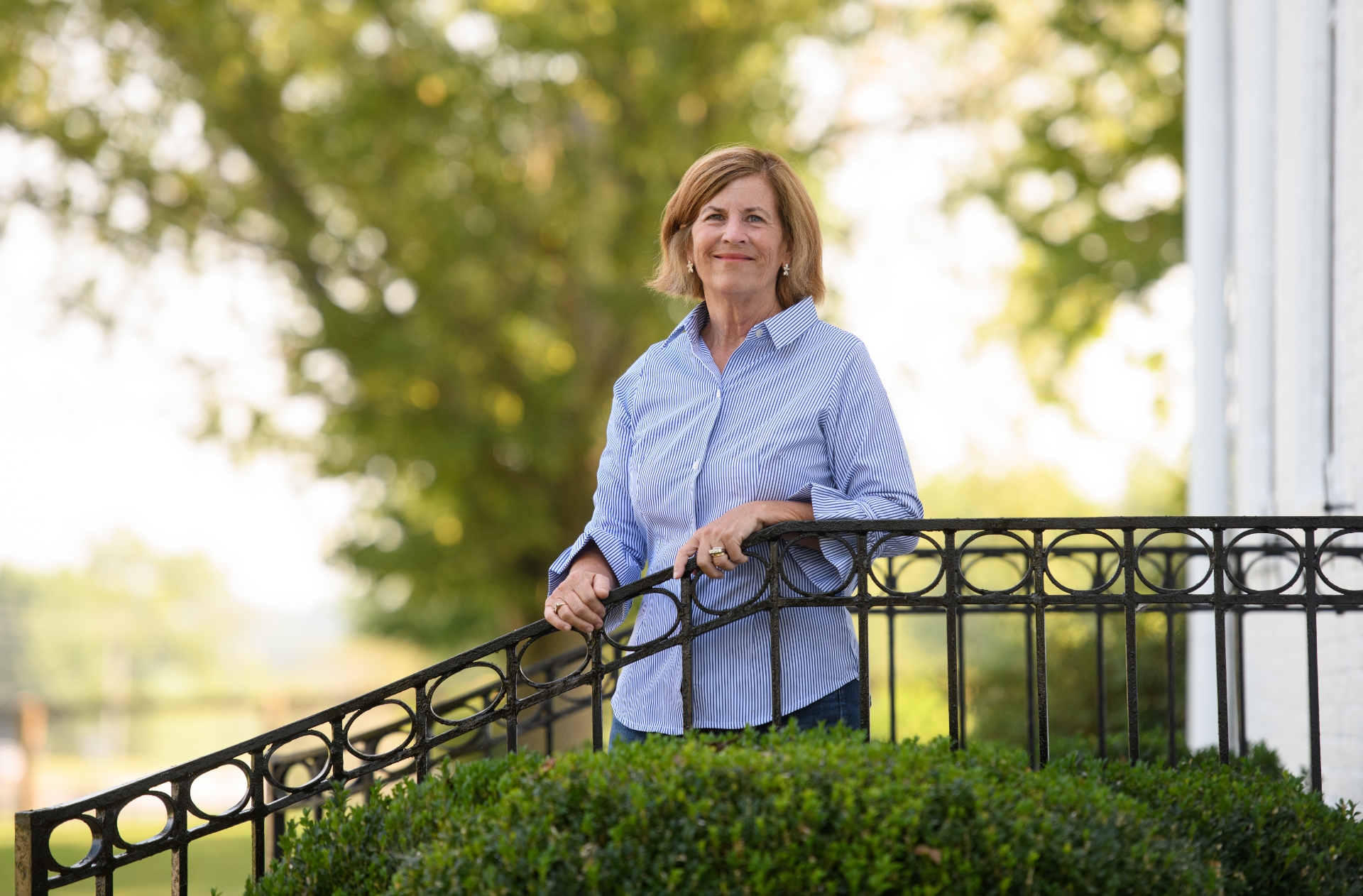 “You try to give people hope, because that’s all you’ve got,” said E. “And that’s what I always wanted to know.”

“I feel like God handpicked them just for me.”Cancer

The Life of the PartyBig Blue Nation, Cancer