Kathy Caldwell was sitting in her bariatric surgeon’s office when she received life-altering news. “He got really teary eyed, came over to me, put his hand on my leg and said ‘Katherine, this isn’t good. It’s just not good,’” Kathy recalled. “When I was first doing tests, he was hoping it was a gallstone or something, but that wasn’t the case. I don’t think he wanted to say the word cancer.” 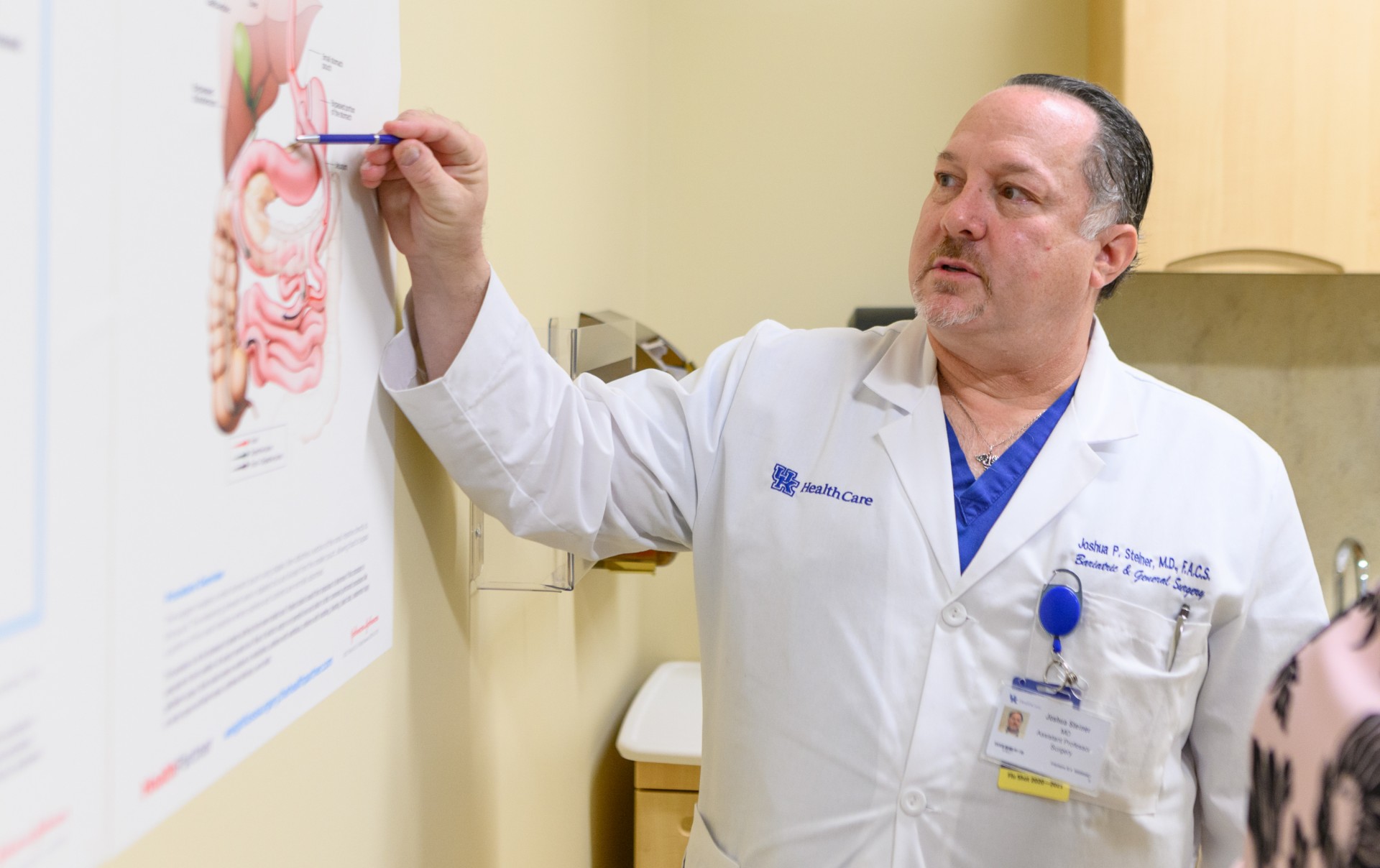 “[Dr. Steiner] showed a lot of compassion,” said Kathy. “He was the one that got the ball rolling.”

A few days earlier, Kathy—a mother of three who lives in Middlesboro, Kentucky—had started feeling nauseous, and laid down to rest. When she woke up the next morning, she looked in the mirror and noticed her entire body had yellowed. “I was yellow, head to toe, even my scalp,” she said. She called Dr. Joshua Steiner, who had performed her gastric bypass surgery several months earlier and was her most trusted medical contact. “He said ‘Get up here now. There’s something wrong.’” 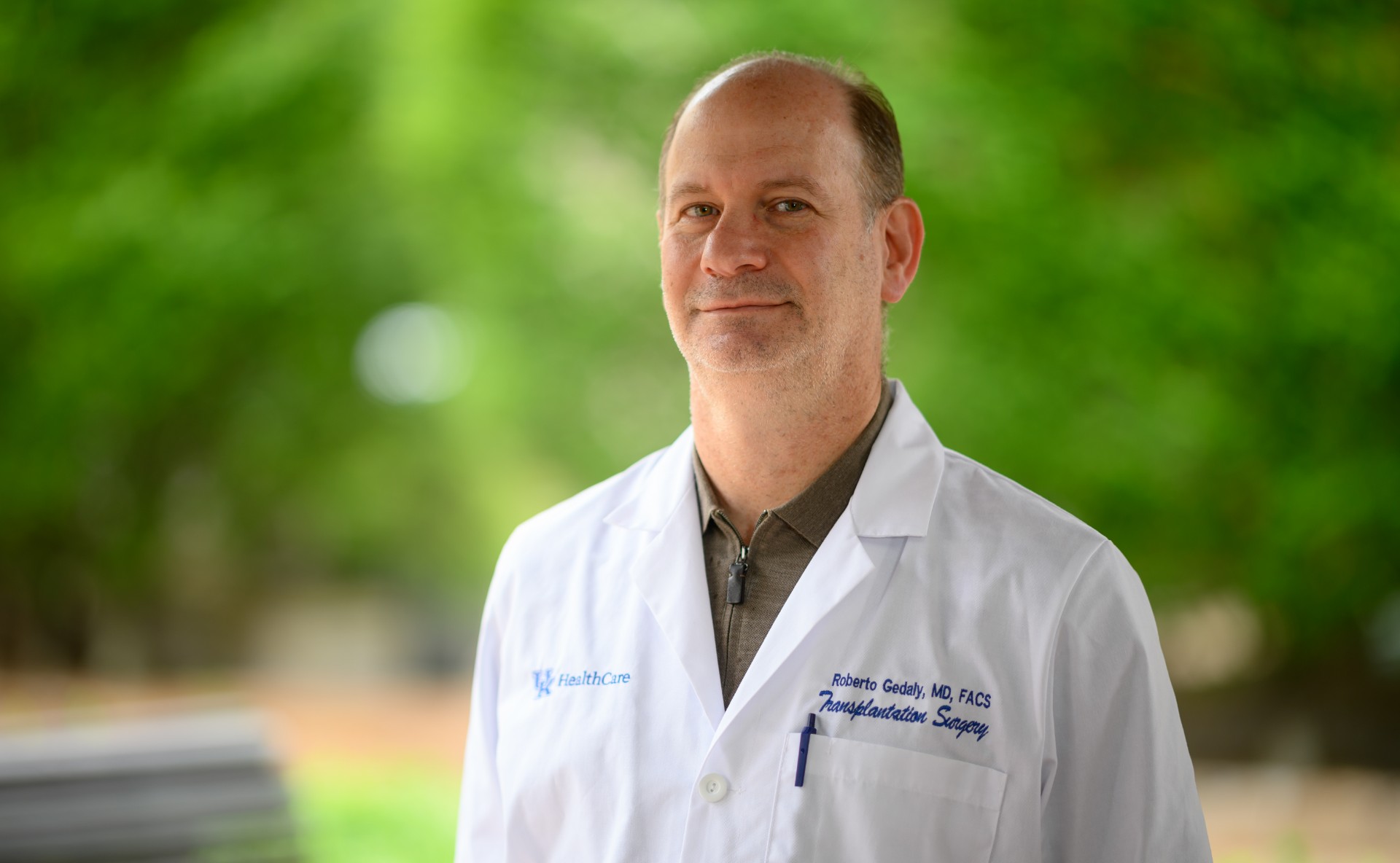 Within hours, Dr. Steiner had referred Kathy to Dr. Roberto Gedaly, a liver transplant specialist and director of the UK HealthCare Transplant Center. Dr. Steiner was adamant that Kathy go to UK HealthCare, and she trusted his opinion. Up until that point, he was one of the only doctors who listened to her when she’d brought up the recurring pain in her abdomen. 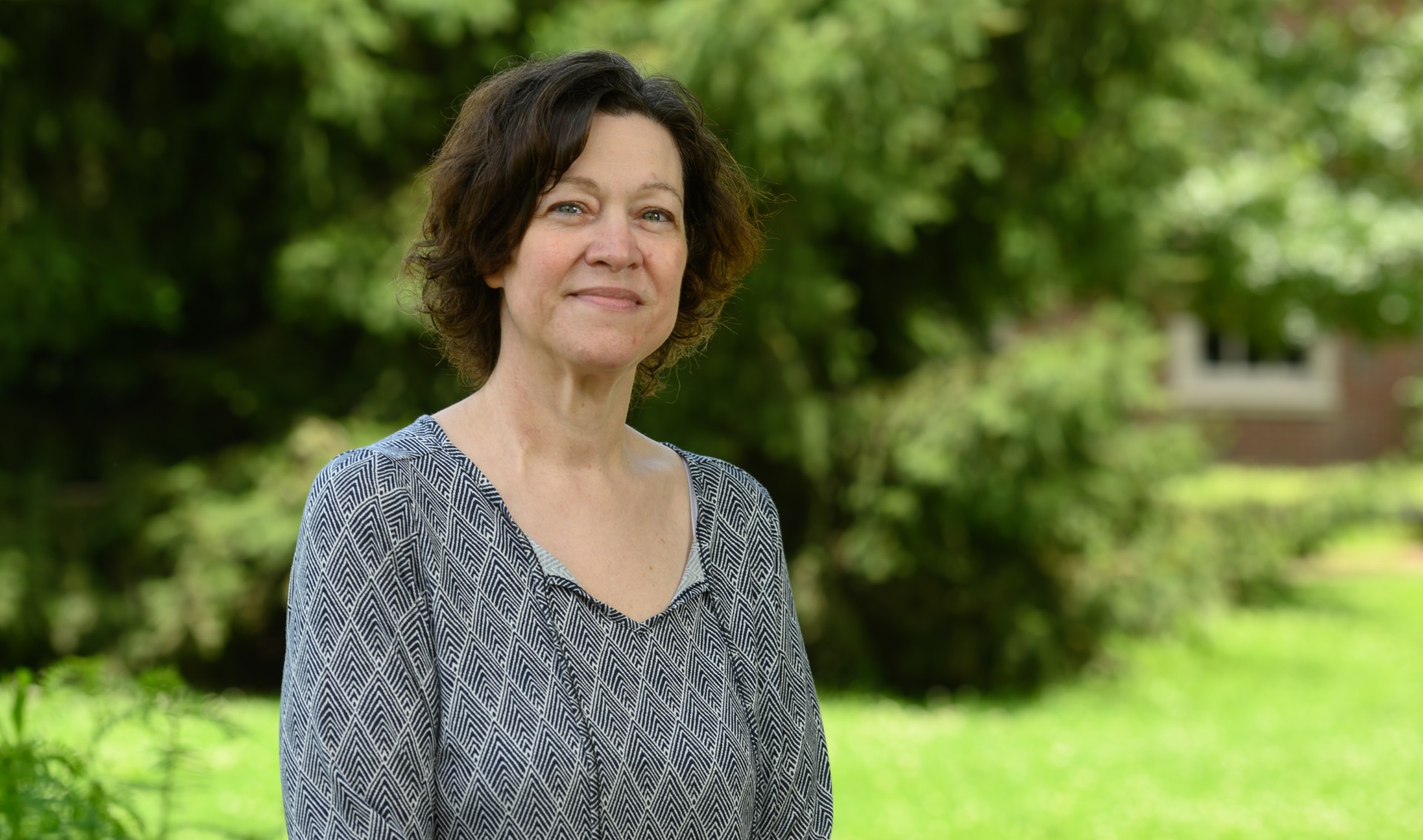 “Before my weight loss surgery, I had probably two years where I was going to my primary doctor and saying, ‘I’m having some right-upper pain. I don’t have a gallbladder. I’m not a doctor, but isn’t my liver there?’ And she would say, ‘Oh, no, no. It’s just where you’re fat.’ Two years of that, and me taking her at her word—she was the one that encouraged me to have the weight loss surgery. She said, ‘I think that’s what your problem is, and your pain will go away.’ Dr. Steiner was the only one that listened to me when I told him that something wasn’t right.” 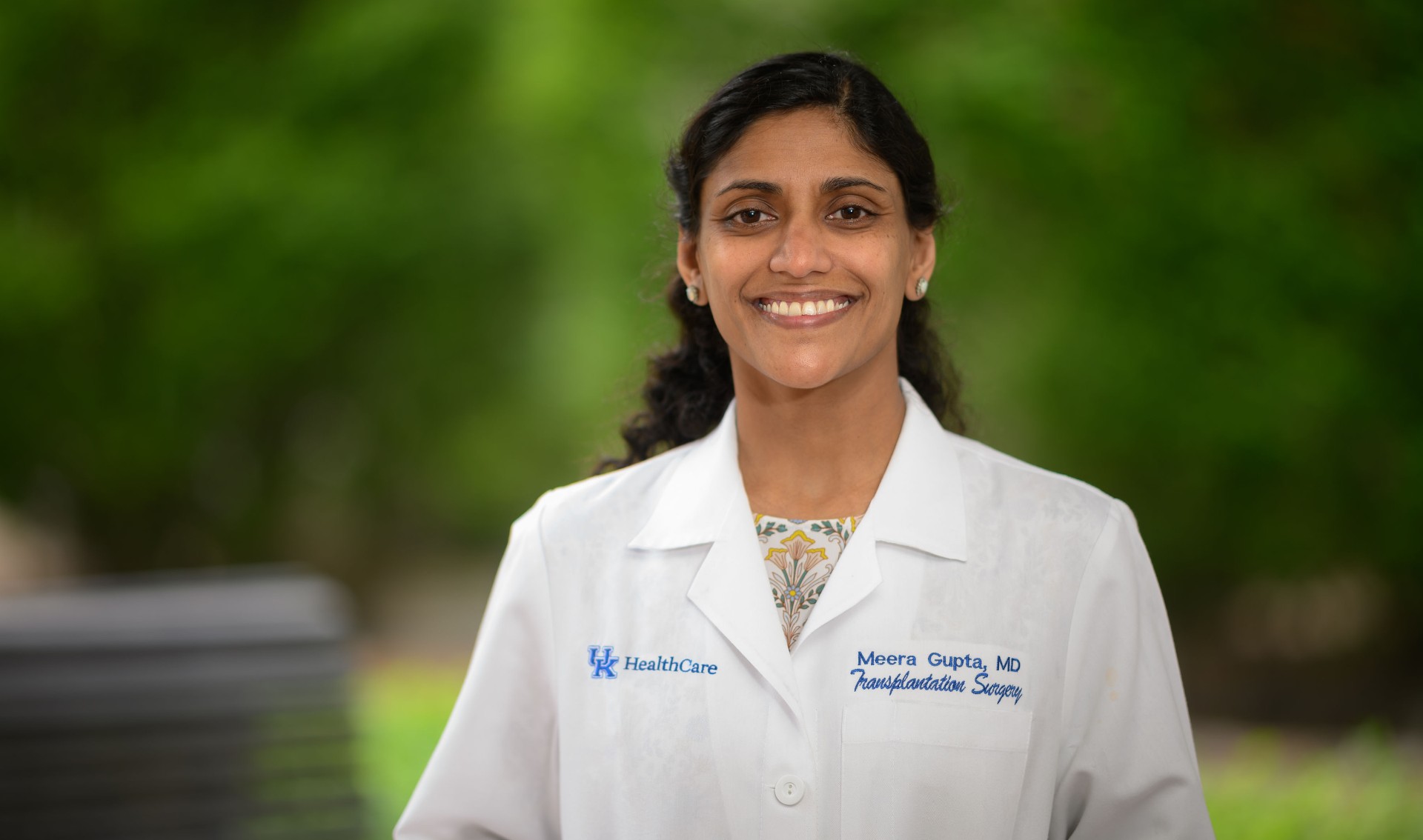 Encouraged by Dr. Steiner’s referral and trust in Dr. Gedaly, Kathy went through a series of tests to try and address the jaundice she was experiencing and uncover its cause. It wasn’t until she met with Dr. Meera Gupta, a liver specialist on Dr. Gedaly’s team, that Kathy learned the underlying condition that had been causing her pain for years.

“She told me the truth. She said, ‘This isn’t good, you have something called a cholangiocarcinoma,’” Caldwell says. “I asked, ‘What exactly is that?’ and she told me it’s bile duct cancer. After hearing that, all I could say was ‘Okay.’ I was still trying to take it all in and process it.” 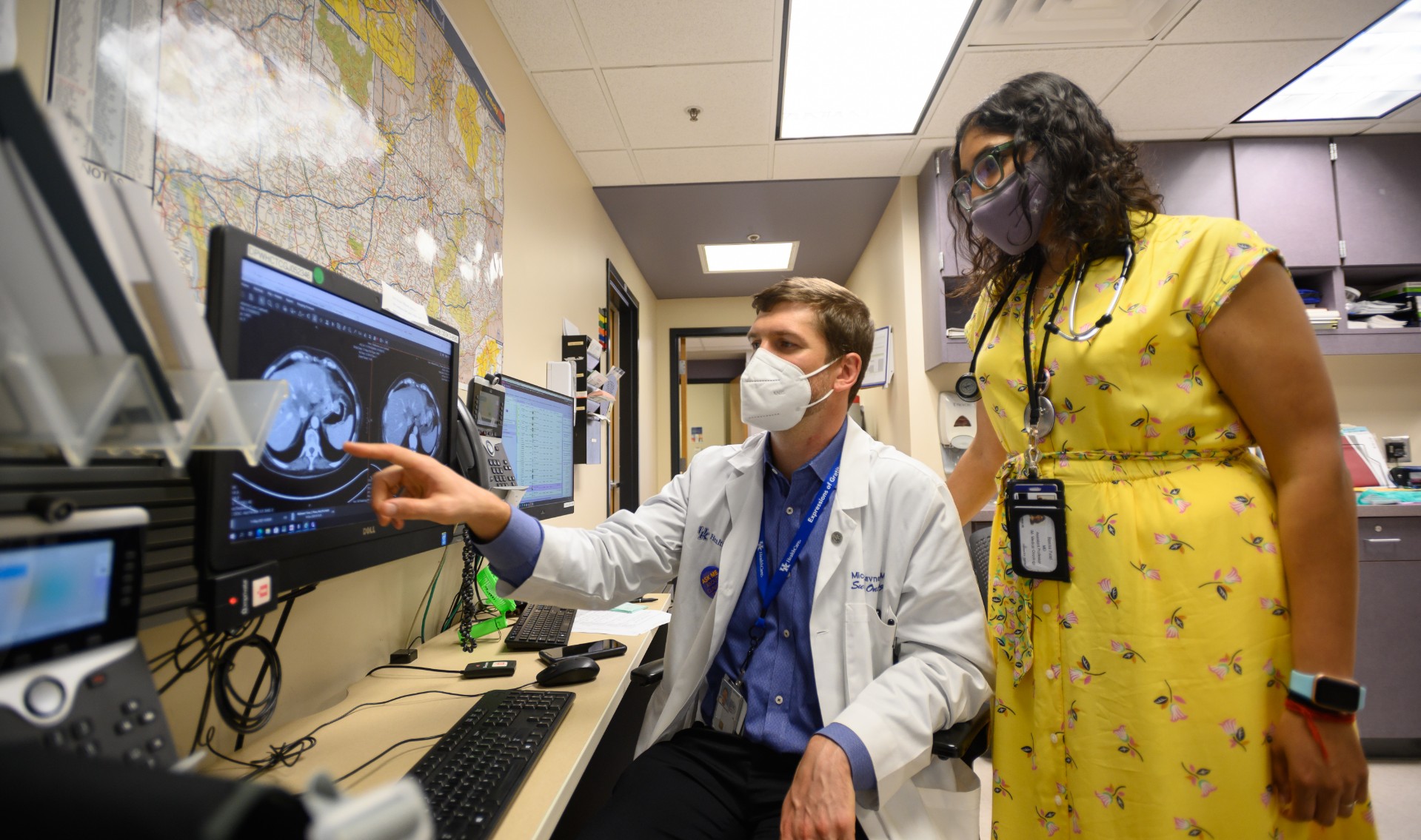 Collaborative, interdisciplinary treatment is a hallmark of the care at Markey Cancer Center.

Kathy was officially diagnosed with intrahepatic cholangiocarcinoma on Halloween of 2019. She was told by Dr. Gupta that her tumor was unresectable—too advanced to remove by surgery—and that patients with her diagnosis were not currently eligible for liver transplant. Kathy and her team made a plan to start her treatment with IV chemotherapy, in the hopes that it would shrink her tumor down to a size that could be removed surgically. Six months in, her tumor remained unresectable—but she learned she might be a candidate for a clinical trial. 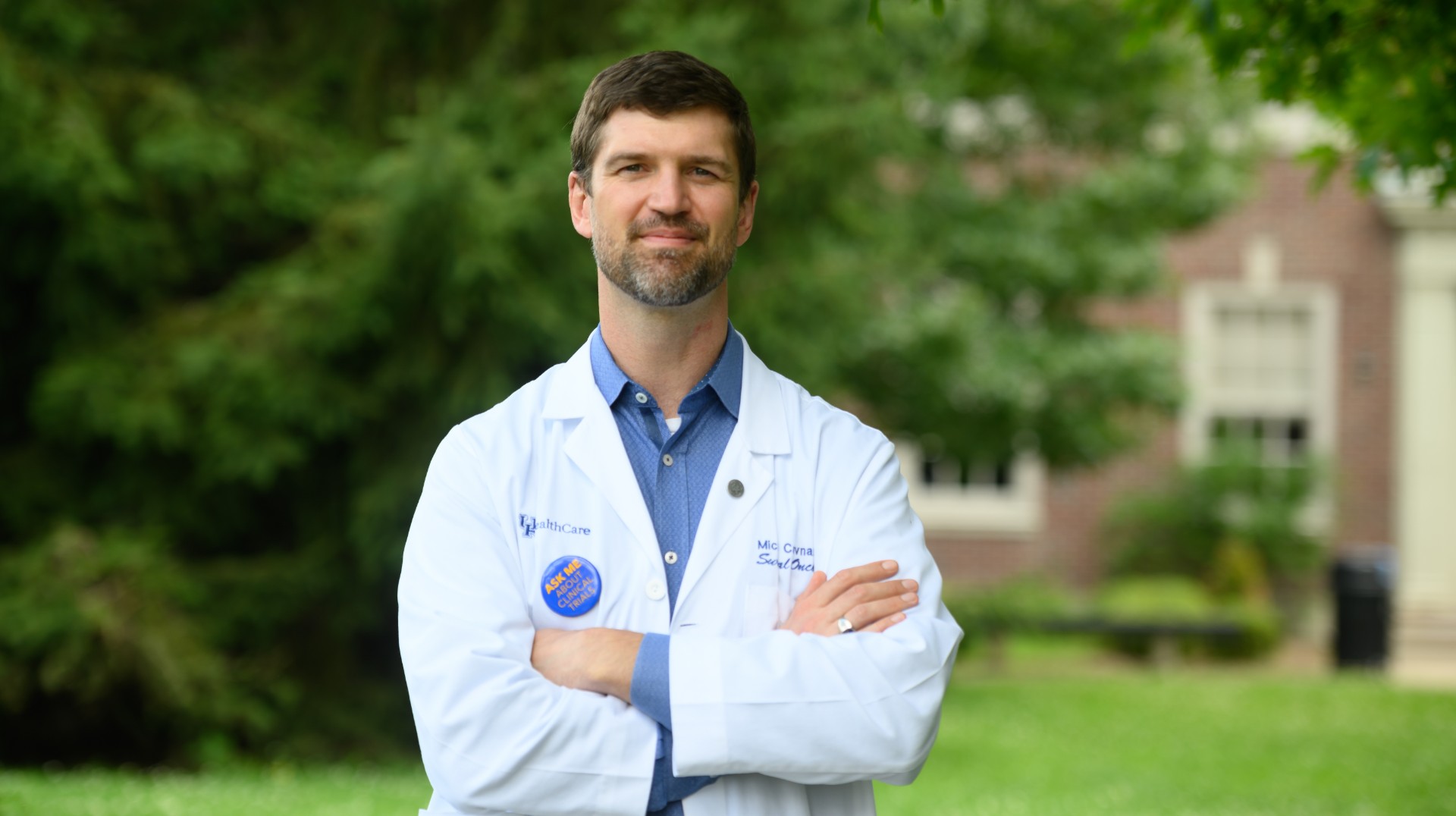 “She was a good candidate,” Dr. Cavnar explained. “She was otherwise pretty healthy.”

The trial, led by surgical oncologist Dr. Michael Cavnar and medical oncologist Dr. Reema Patel at UK HealthCare’s Markey Cancer Center, for a specialized type of treatment for cancers like hers. Kathy was eager to participate: “I wasn’t going down without a fight,” she said. “I was like, ‘Sign me up!’ If they’re willing to take me, I’ll do it. ” 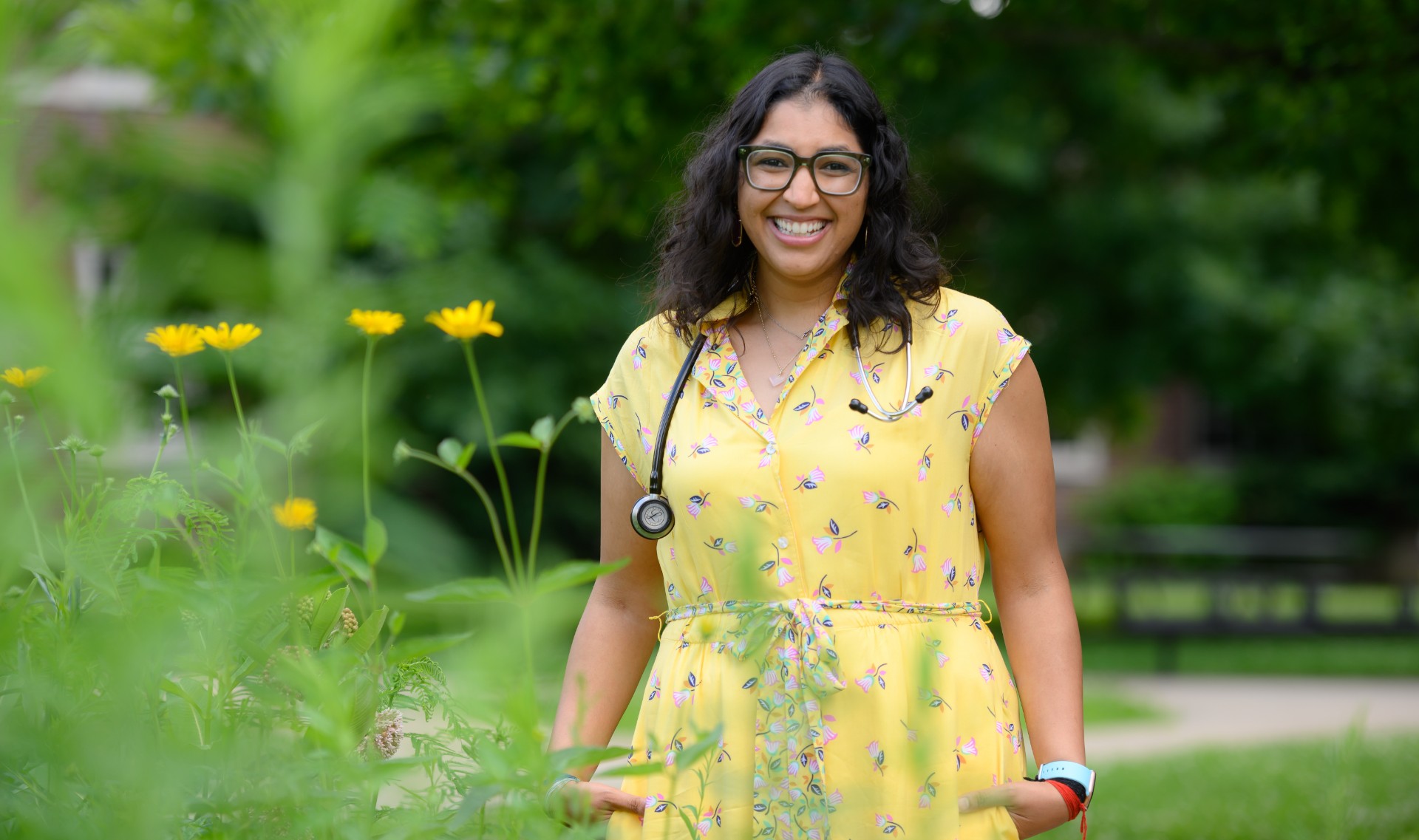 “Dr. Patel has been so wonderful to me,” said Kathy. “[She] makes me feel like I’m not alone.”

“The only way we have definitive proof of what works and doesn’t work in medicine is clinical trials,” said Dr. Cavnar. “Many medicines have been tested by clinical trials—for example, blood pressure drugs, medicines to lower your cholesterol, and chemotherapy drugs used to treat cancer. Clinical trials have to go through a very extensive vetting process—it took us over a year of going through a series of committees, meetings, and applications, and we also had to go to the FDA, which was a whole separate process. All of that is to make sure that we’re designing our clinical trial in a way that is safest for the patient, and has the highest likelihood of benefit to the patient and future patients.” 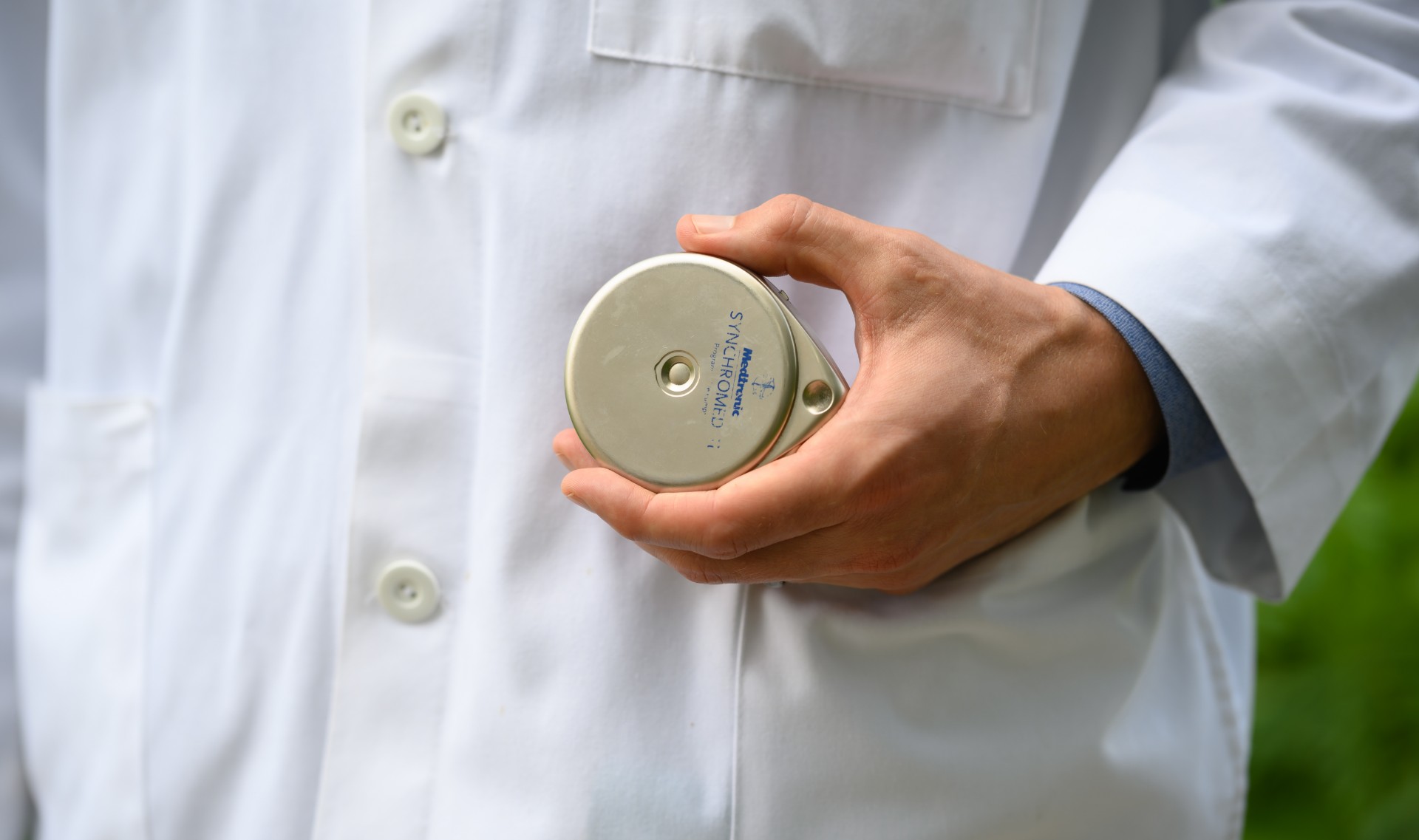 Dr. Cavnar holds a hepatic artery infusion pump, like the one used in Kathy’s procedure.

Dr. Cavnar and Dr. Patel explained the specifics of the trial to Kathy. They were studying the safety of combining two separate medical devices: an implantable pump typically used to deliver pain medicine to the spinal cord, and a special catheter designed to be implanted into an artery. For the study, this device combination was being surgically implanted in a way that allowed chemotherapy to be infused directly into the liver at a higher dose.

Typically, when patients receive chemotherapy, it’s administered through their entire body via their bloodstream. The method Dr. Cavnar and Dr. Patel were studying would allow more chemotherapy to be delivered directly to the tumor, at a higher dose than the IV chemotherapy Kathy had received previously. 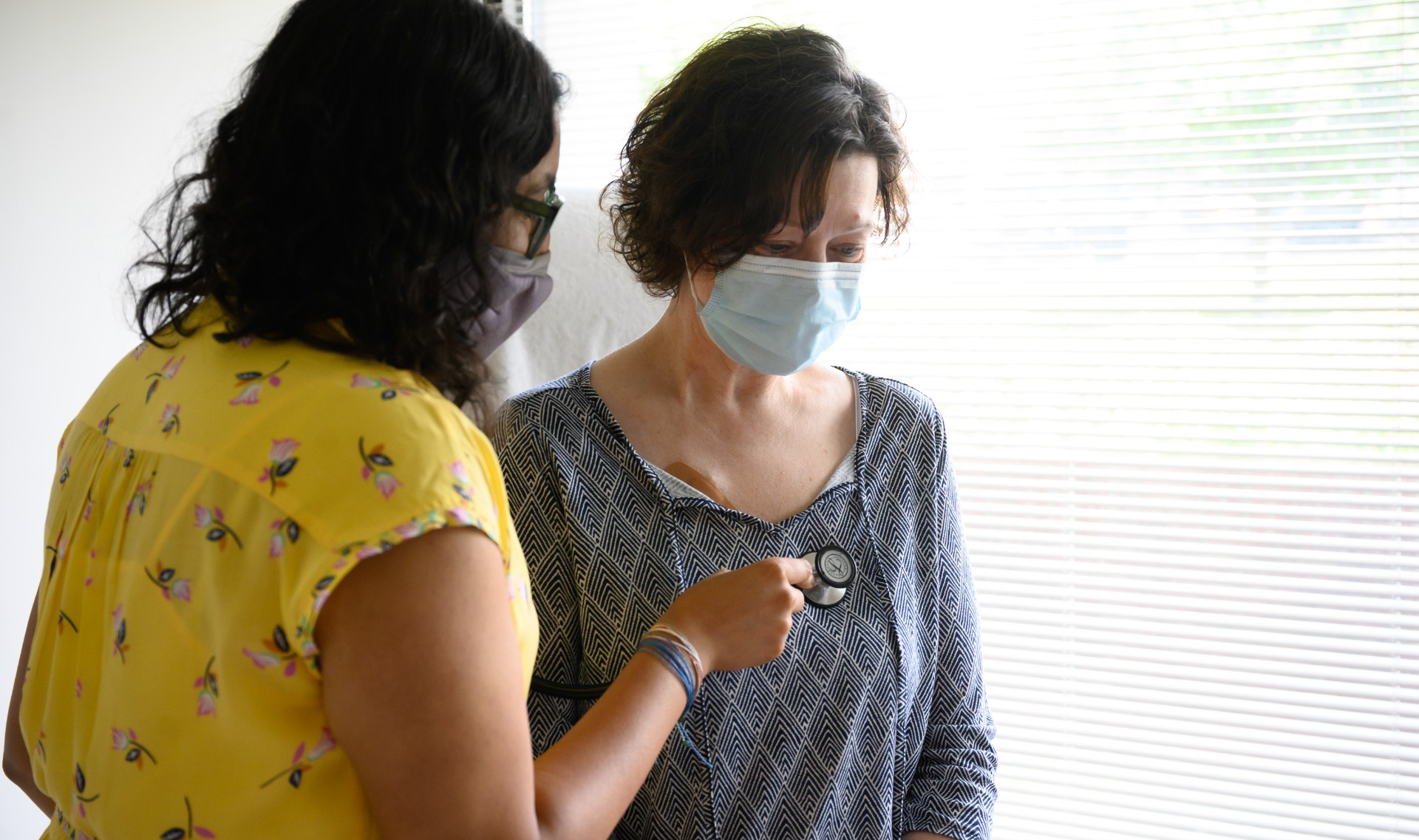 Kathy continues to be followed closely to determine the long-term outcomes and effects of her trial.

“June 29th of 2020, I went in for surgery and got the hepatic artery infusion pump implanted,” said Kathy. “That was a six-month trial, and I’d done really well with it. [Dr. Cavnar] was very pleased. The only little bump in the road I had—I’ve got a metal stent in my stomach, and the catheter had kind of somehow managed to lay on top of it, and it rubbed, and it had eroded into my bowels. So I had to have emergency surgery to have it taken out, which I was really sad. I didn’t want to lose the pump because it was working so well.” 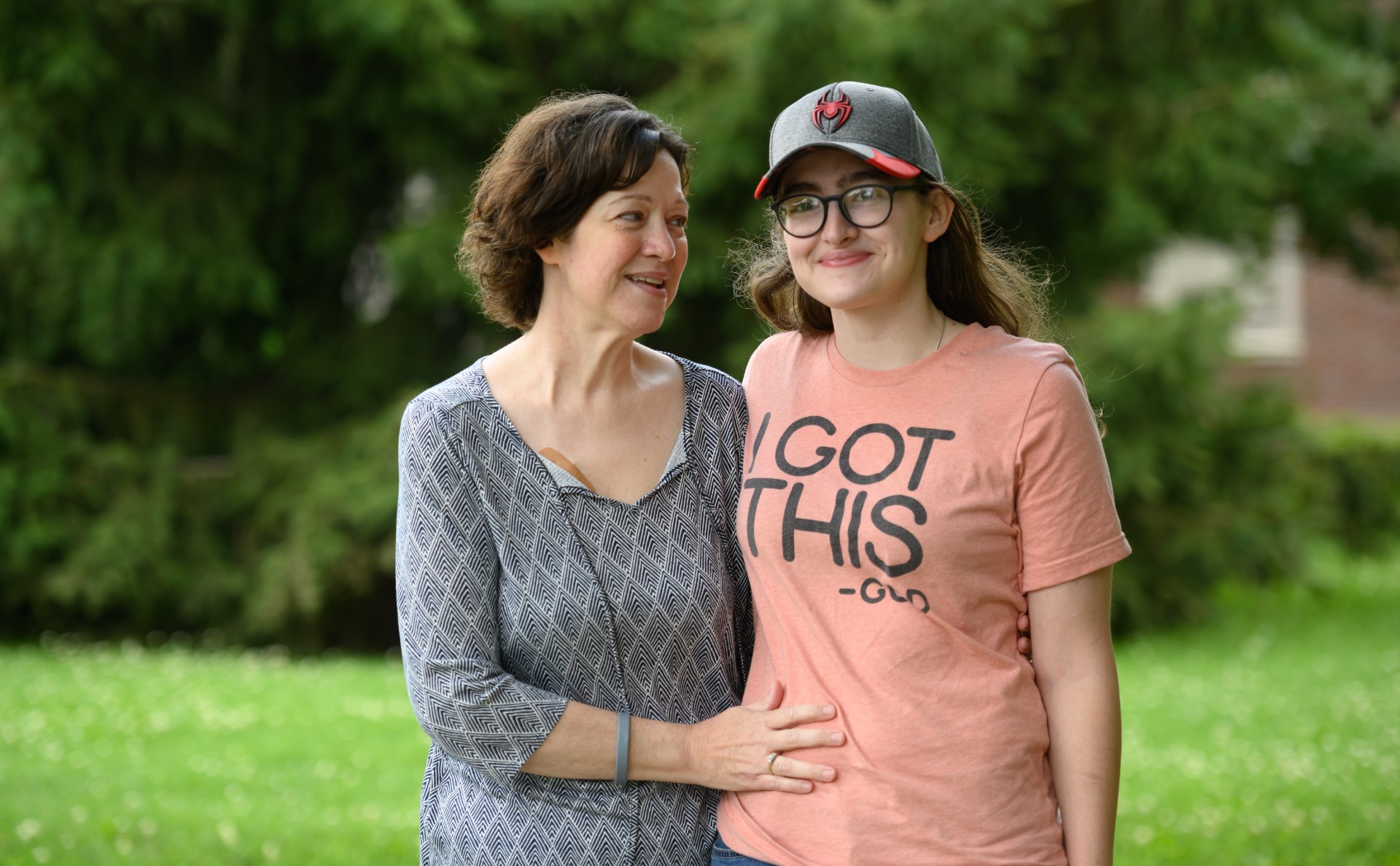 “Our goal for the trial was that some people will get to complete resection after response,” said Dr. Cavnar. “But for those that don’t, the usual treatment pathway that we’re following is that they would either continue the pump therapy as long as possible, or they would get radiation on the backend of that. The trial period calls for six months of treatment, and [Kathy] was at about five and a half months.” 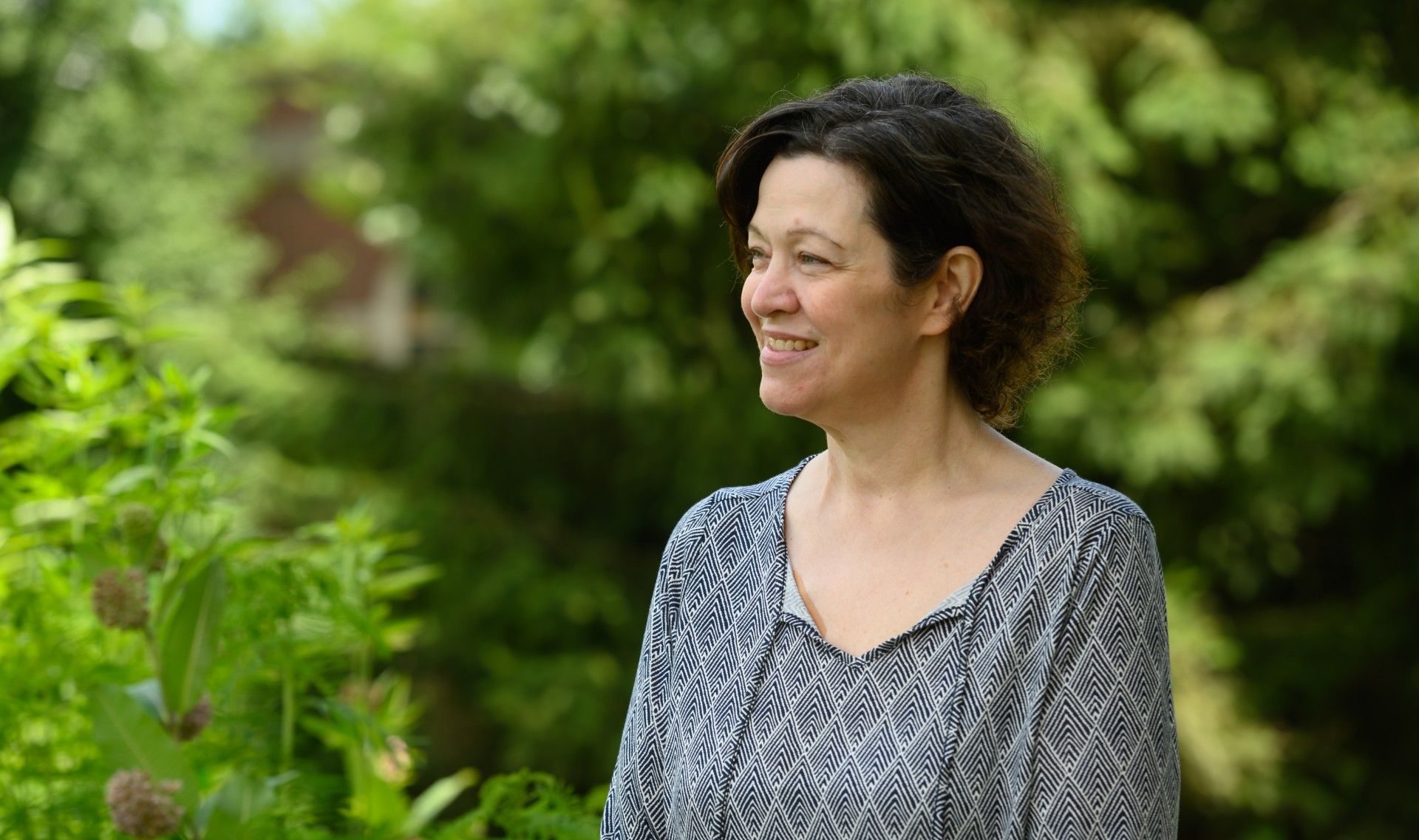 “They really do care for me as a person,” said Kathy. “And that's what meant so much to me.”

Despite being unable to continue with the implanted pump, Kathy and her doctors are pleased with the progress she made during her time with it. Now, she’s continuing her treatment through radiation and a chemotherapy pill. Kathy is thankful for the treatment she continues to receive at UK HealthCare, and she’s thankful for the strength that her faith has given her. Kathy says that through God, “I have joy and peace and hope.”

“The doctors have all been so wonderful to me. With them, I don’t feel like just a patient. They show concern, and they make me feel like an individual person,” she said. “I feel like God hand picked them just for me. That’s honestly how I feel—they’ve been so kind. I didn’t have any hesitation. I wanted to be at UK HealthCare, I wanted the best doctors, and that’s exactly what I got.” 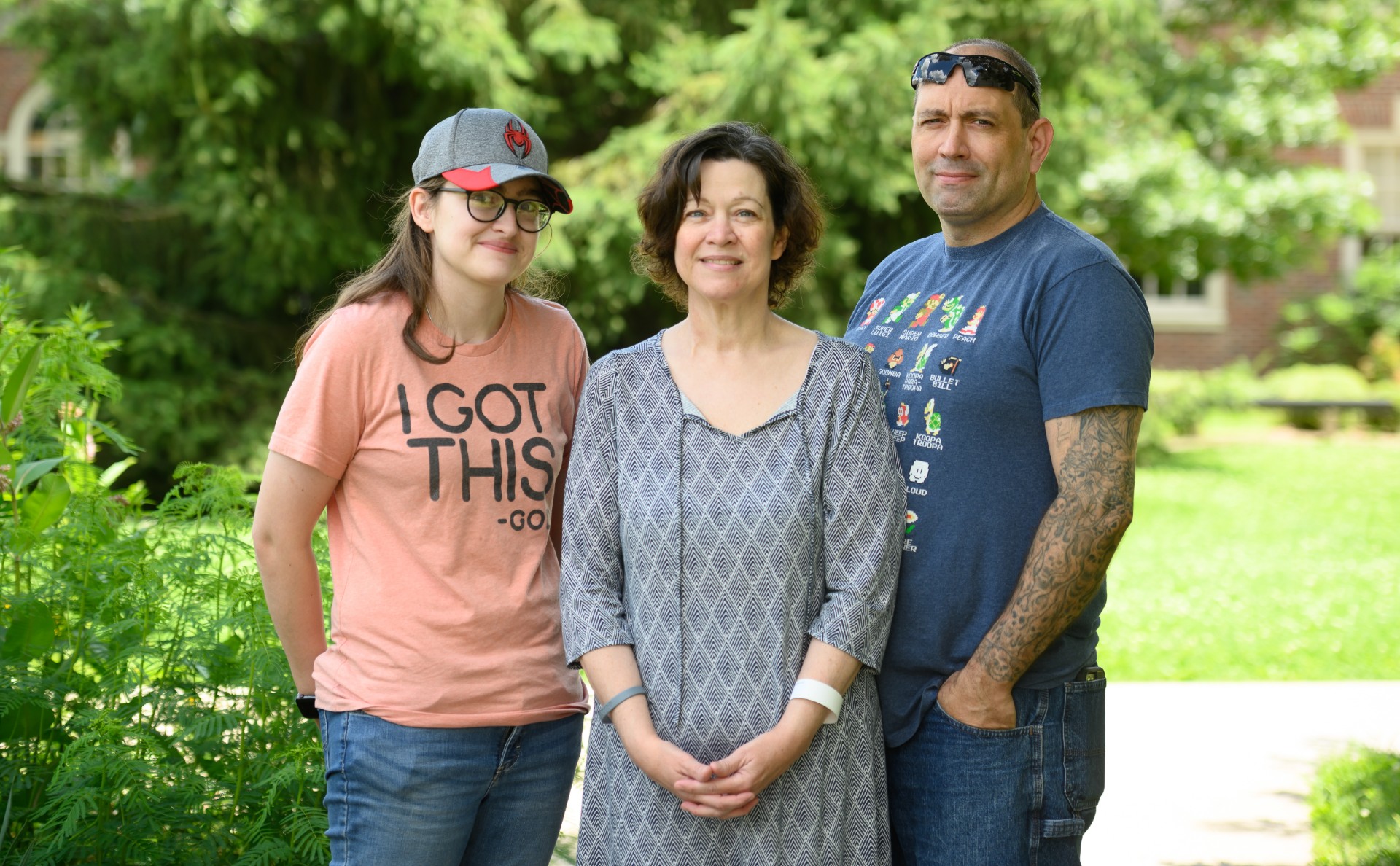 “I'm still hopeful,” said Kathy. “I'm going to do whatever it takes.”

“I was determined to find a way.”Cancer