“It was Memorial Day weekend. I was supposed to go meet my girlfriend. I was very sick for a few days, so I went to the ER. And when I woke up, my doctor told me I’ve been diagnosed with stage four colon cancer. I’m only 27 years old.” 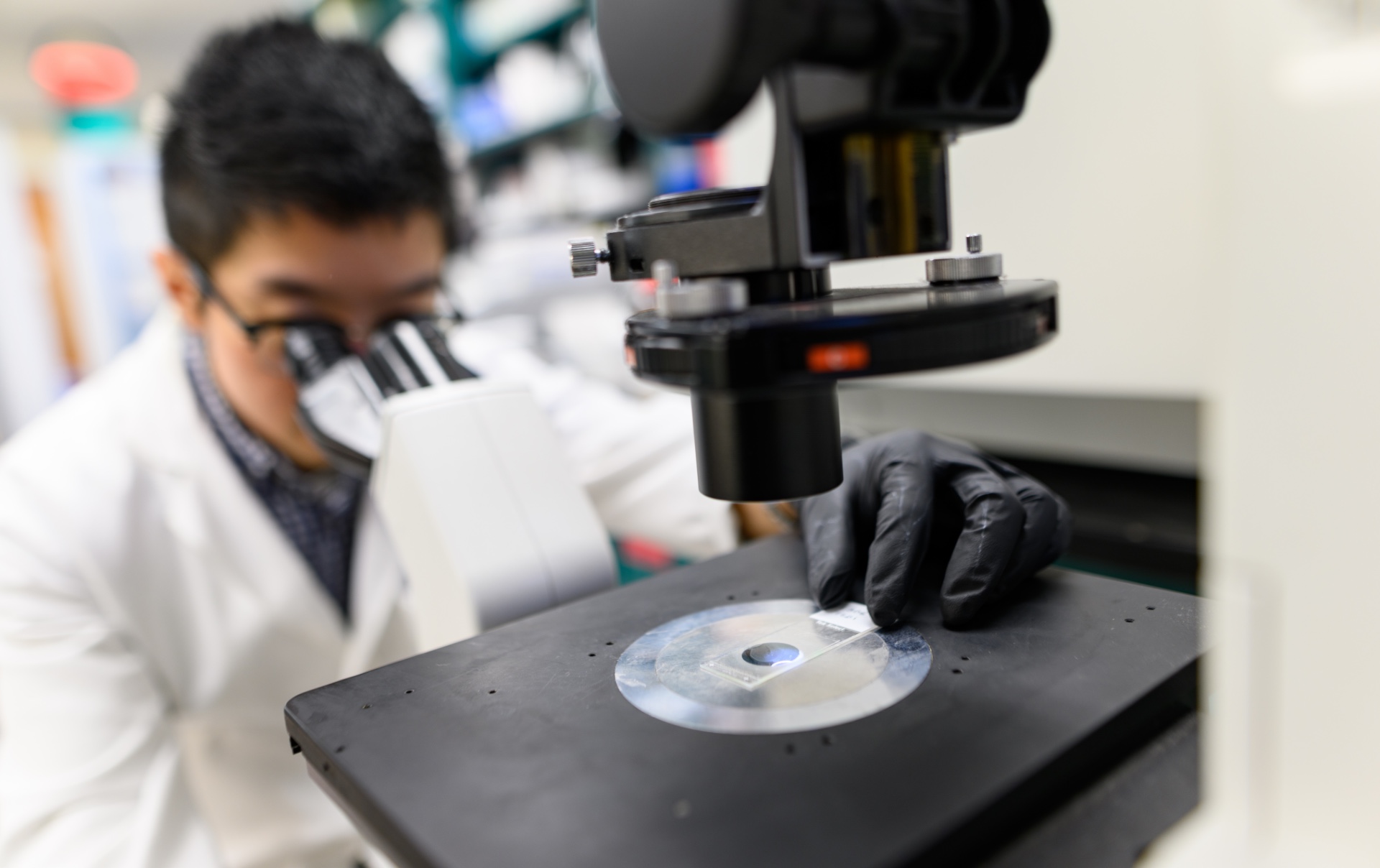 "Until this happened to me, I [had] been working on some interesting things," said Ronnie.

Yueming “Ronnie” Wu is a third-year chemistry PhD candidate who works at UK HealthCare’s Sanders-Brown Center on Aging, studying head injuries. In May 2020, he took himself to the ER at UK HealthCare’s Albert B. Chandler Hospital. “I was throwing up,” Ronnie said. “My stomach was very bloated and very firm. At the beginning, I thought it was IBS. They did a couple tests and ultrasound. The doctor said it was a gallstone—a gallbladder stone. I said, ‘Okay, no big deal. That happens all the time.’” 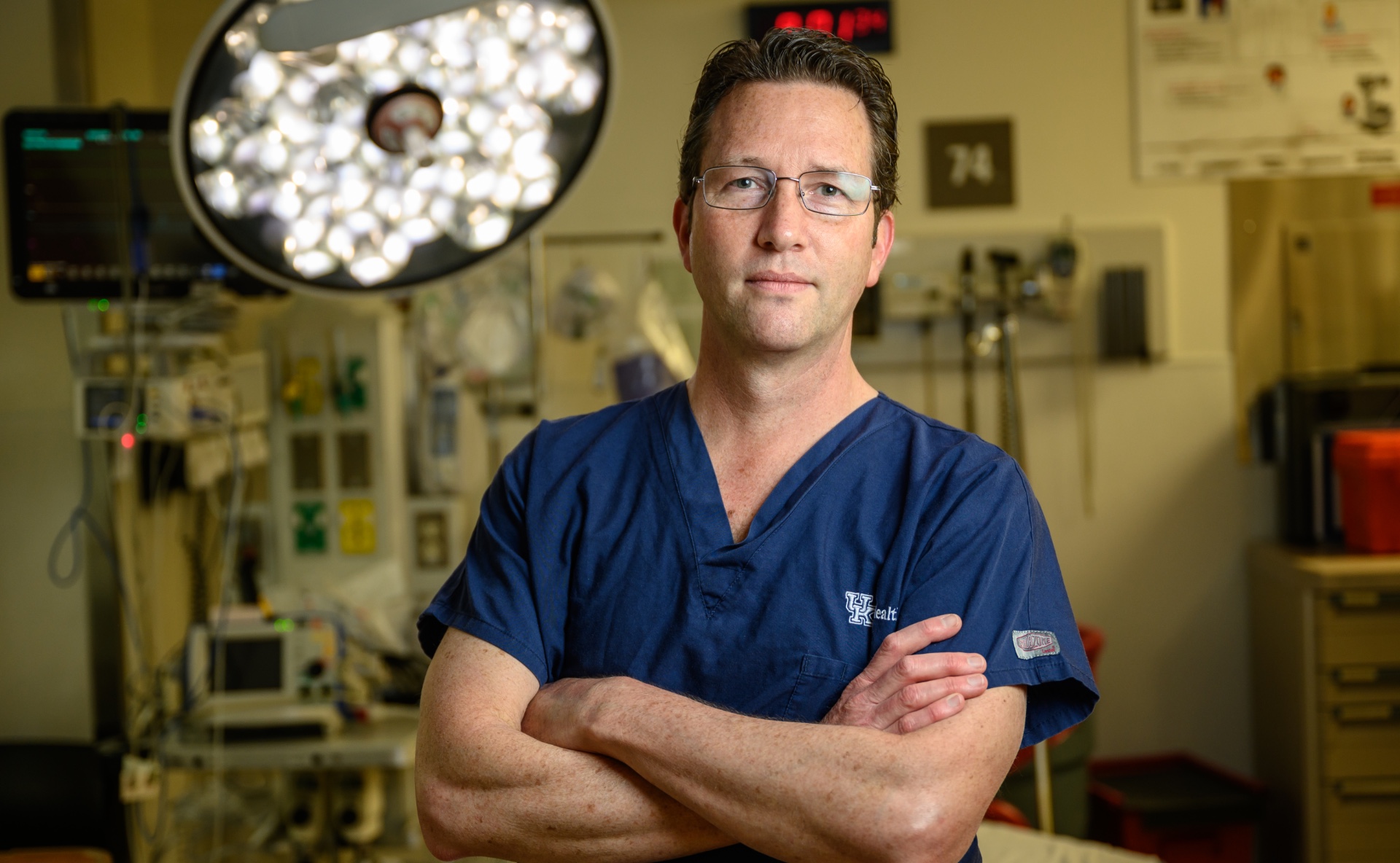 Ronnie’s team, including Dr. Andrew Bernard, pushed for further testing to determine the root of the problem.

But Ronnie’s pain worsened, and his doctors became increasingly concerned. “He didn’t really fit the model for gallbladder trouble,” said Dr. Andrew Bernard, the general surgeon in the ER who worked on Ronnie. “A young healthy guy with bloating and some belly pain—we certainly weren’t thinking cancer. We knew that was a possibility. We did a CAT scan. We found something that looked like a narrowing in the colon.” 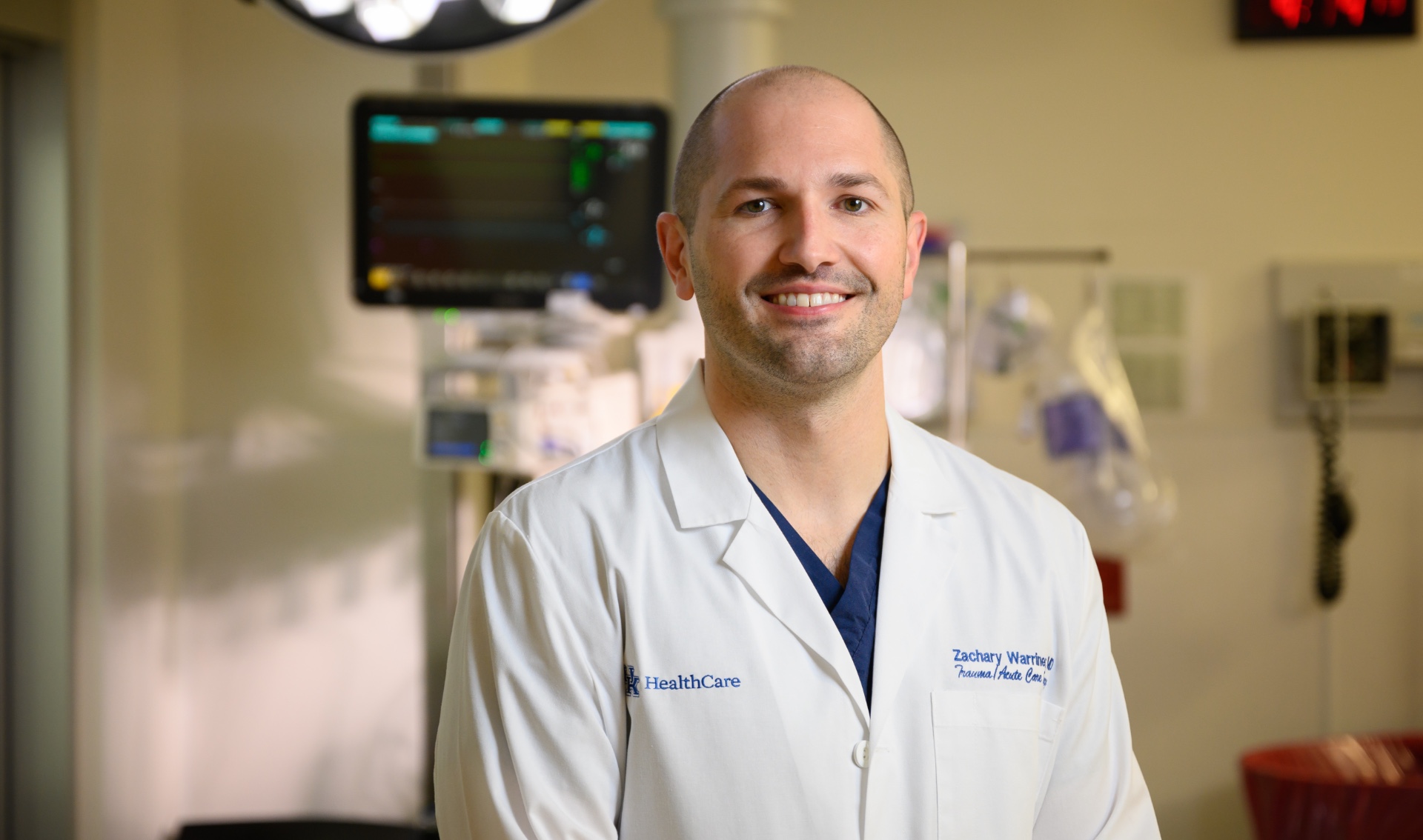 “We made the decision to enter his abdomen,” said Dr. Warriner, “To hopefully discover what the diagnosis was.”

Dr. Zach Warriner, an acute care surgeon and Dr. Bernard’s partner, stepped in to conduct an emergency surgery to see what was blocking Ronnie’s colon. “We very quickly realized that he had cancer,” said Dr. Warriner. “Once we got into his abdomen, it became apparent that the blockage was from a mass, that mass had eroded through the wall of the colon and had spread to the lining of his abdominal cavity. He had a tumor implant on the inside of his abdomen, apart from the colon. He was diagnosed with advanced colon cancer that had spread to other locations.”

“I felt like it was important in that situation that he knew we were with him,” said Dr. Warriner.

“In our emergency department, we are able to reach out when symptoms and problems develop,” said Dr. Warriner. “Ronnie came in with belly pain, but because of the resources we have here, we’re able to make the right diagnosis and give him the right operation. Now, I certainly didn’t anticipate for him to have such an advanced cancer. But I think that we’re very lucky to work in a place where we have the support and the expertise that we do.”

“I was able to tell him, this is cancer,” said Dr. Bernard. “That’s what the team found. We have treatments for this, and we have a team that does this, and we’re going to have them come talk to you.” 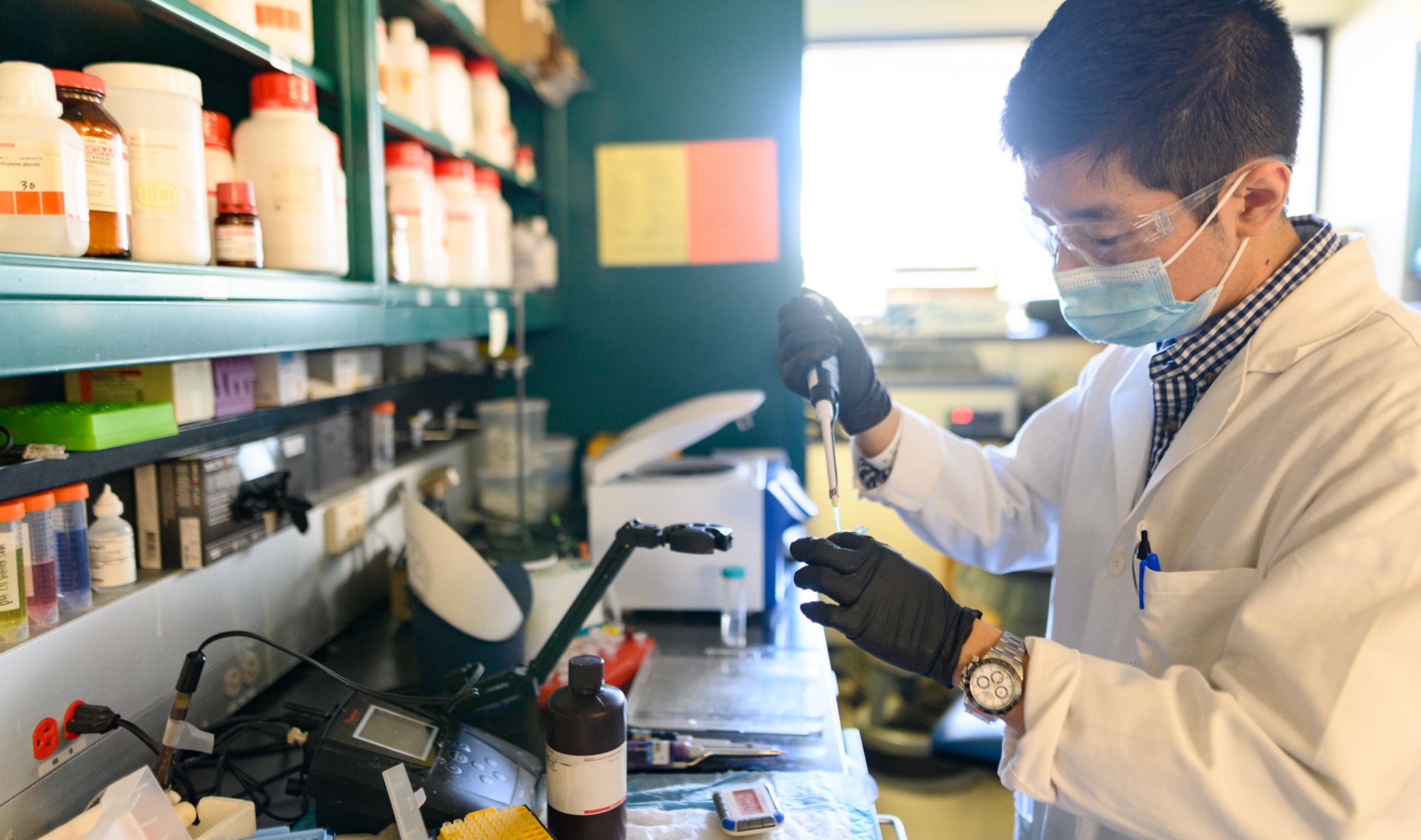 “When I went home, I looked for research papers,” said Ronnie. “Naturally, I wanted to know how it works.”

“At first, I didn’t believe it and refused to accept that fact. There’s no way,” said Ronnie. “The fact that I had cancer totally flips my world upside down physically and emotionally. I’m shocked and I’m scared but I choose to face it with a positive attitude.”

Stage four colon cancer isn’t common in people Ronnie’s age. But Dr. Zhonglin Hao, an oncologist at UK HealthCare Markey Cancer Center, explained that the tide of colon cancer is slowly but noticeably changing, with more young people getting diagnosed. “The super majority are in their sixties, seventies. Few are in their fifties. A patient like Ronnie, who was 27 at diagnosis, and now he’s 28—between five to ten percent, not very common. But over the past few years, I did see quite a few.” 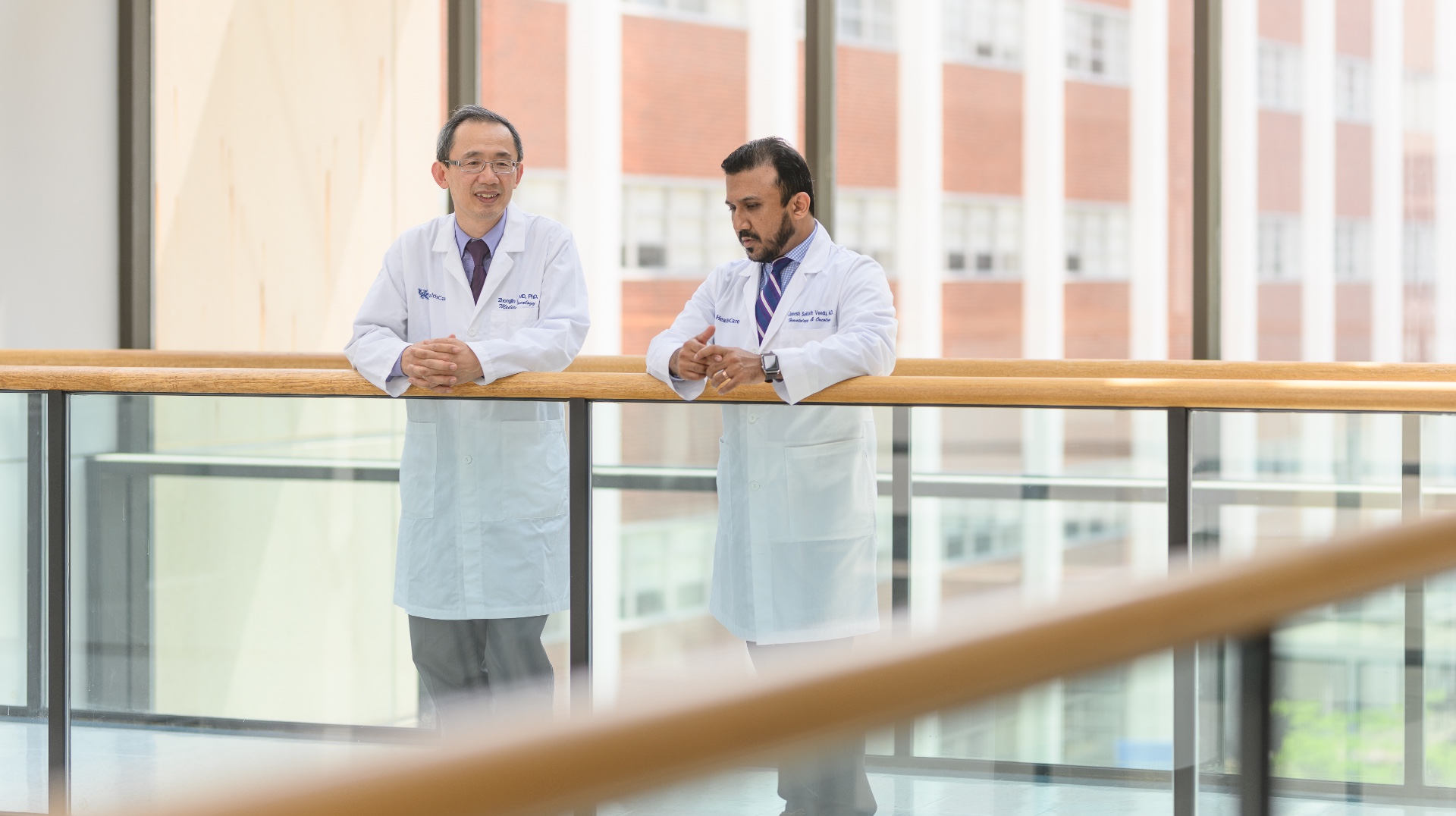 Ronnie’s case was brought before an interdisciplinary team to develop the best treatment plan for him.

As Ronnie recovered from his emergency surgery, his cancer care began. His case was brought before the Molecular Tumor Board to help determine the best course forward, and the determination was a two-stage approach: chemotherapy to shrink the tumors, followed by surgery to remove any remaining cancer. Ronnie met with his oncology team every two weeks, working with Dr. Hao as well as Dr. Janeesh Sekkath Veedu, a resident oncologist at Markey Cancer Center. 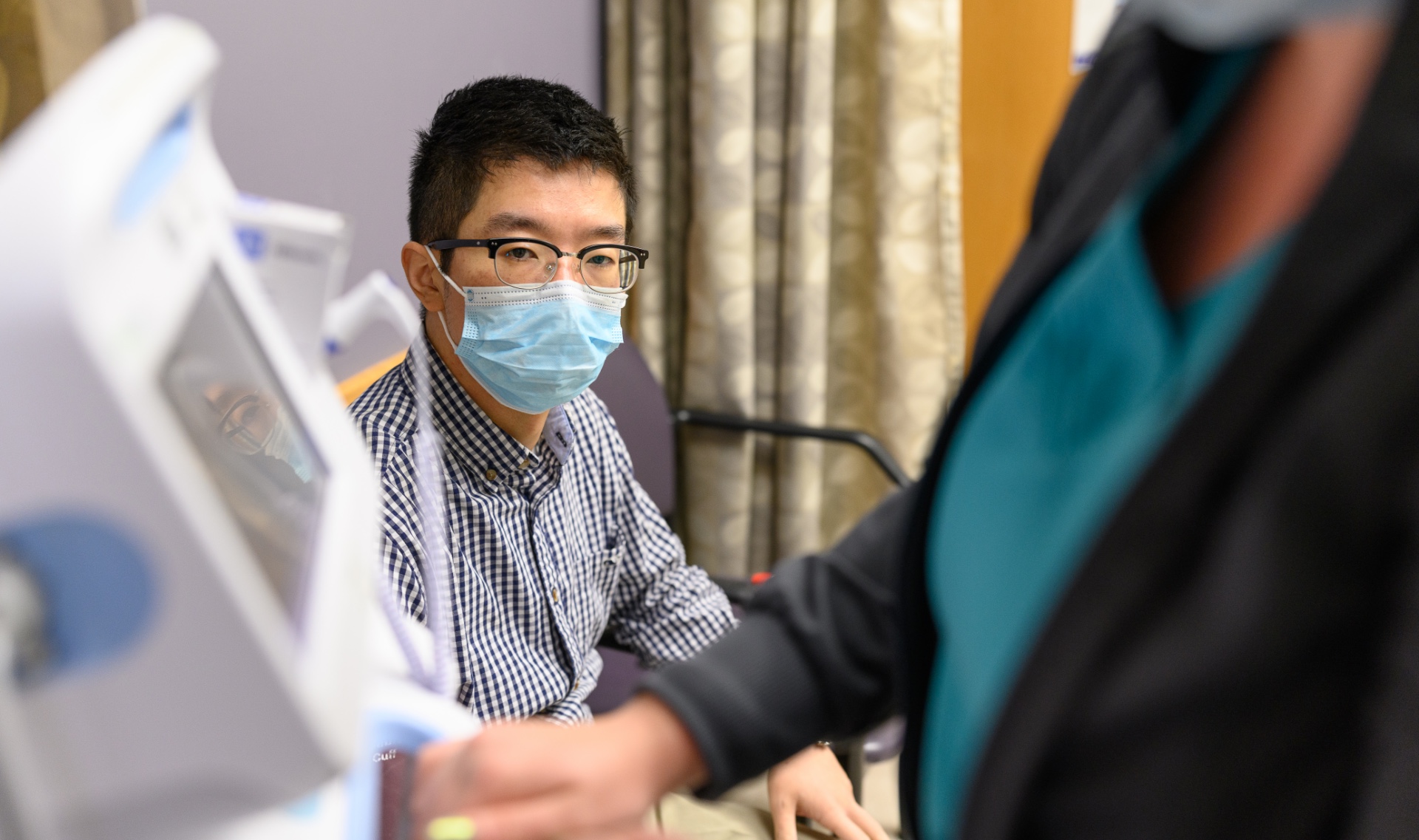 “It makes you very weak, just low on energy,” said Ronnie. “You don't want to move.”

The thing I feared the most is actually the first couple months of the treatments,” said Ronnie. “Because the oncologist said, ‘We don’t know if the treatment will work or not.’ That’s the scariest part of the whole experience because chemo is very painful. But after three months of treatment, they ordered a MRI and a colonoscopy. They said that the treatment had been working very well, and a lot of the tumor has been downsized, and a lot of small spots are already gone.”

After three months of chemotherapy, doctors decreased Ronnie’s dosage and began a new treatment called immunotherapy—an injection of antibodies to control the growth of the tumor. This new treatment improved his health tremendously, with fewer side effects. He completed his six months of chemotherapy in October 2020, ready to move onto the next phase of his treatment: HIPEC surgery, a procedure that would remove any lingering tumors, as well as microscopic traces of cancer in his abdomen. 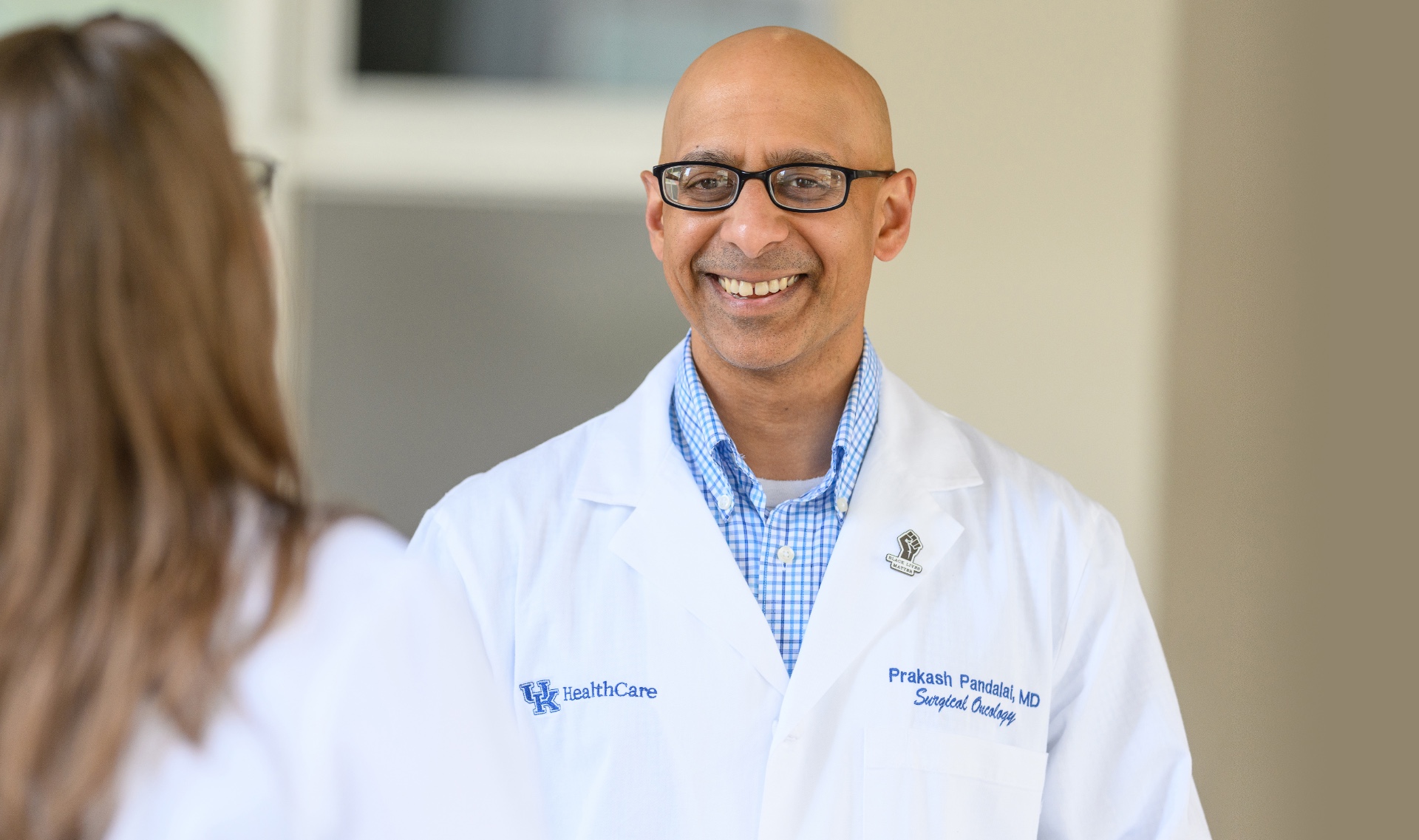 “HIPEC is not offered in many places,” said Dr. Pandalai. “And we specialize in that.”

The procedure took eight to ten hours,” said Dr. Prakash Pandalai, the oncologist and HIPEC surgeon from UK HealthCare’s Markey Cancer Center who performed Ronnie’s procedure alongside colorectal surgeon Dr. Sandra Beck, who also helped diagnose Ronnie’s cancer at his first surgery. “A lot of our cases for HIPEC are done because of colorectal cancer. So we generally try to involve [colorectal surgeons] because they’re the experts. We’re able to actually wash the abdominal cavity for about 90 minutes with this chemotherapy. It’s highly effective at killing the stuff that we cannot see. We were pretty optimistic from the beginning, and Ronnie did great. And when we got the results back, it was just a home run.”

For Ronnie, that “home run” meant his surgery was a success. His doctors found no evidence of disease, and his tumor markers dropped back to normal. After six grueling months of chemotherapy and a HIPEC surgery, he’s returning to his studies and is back on the road back to health. 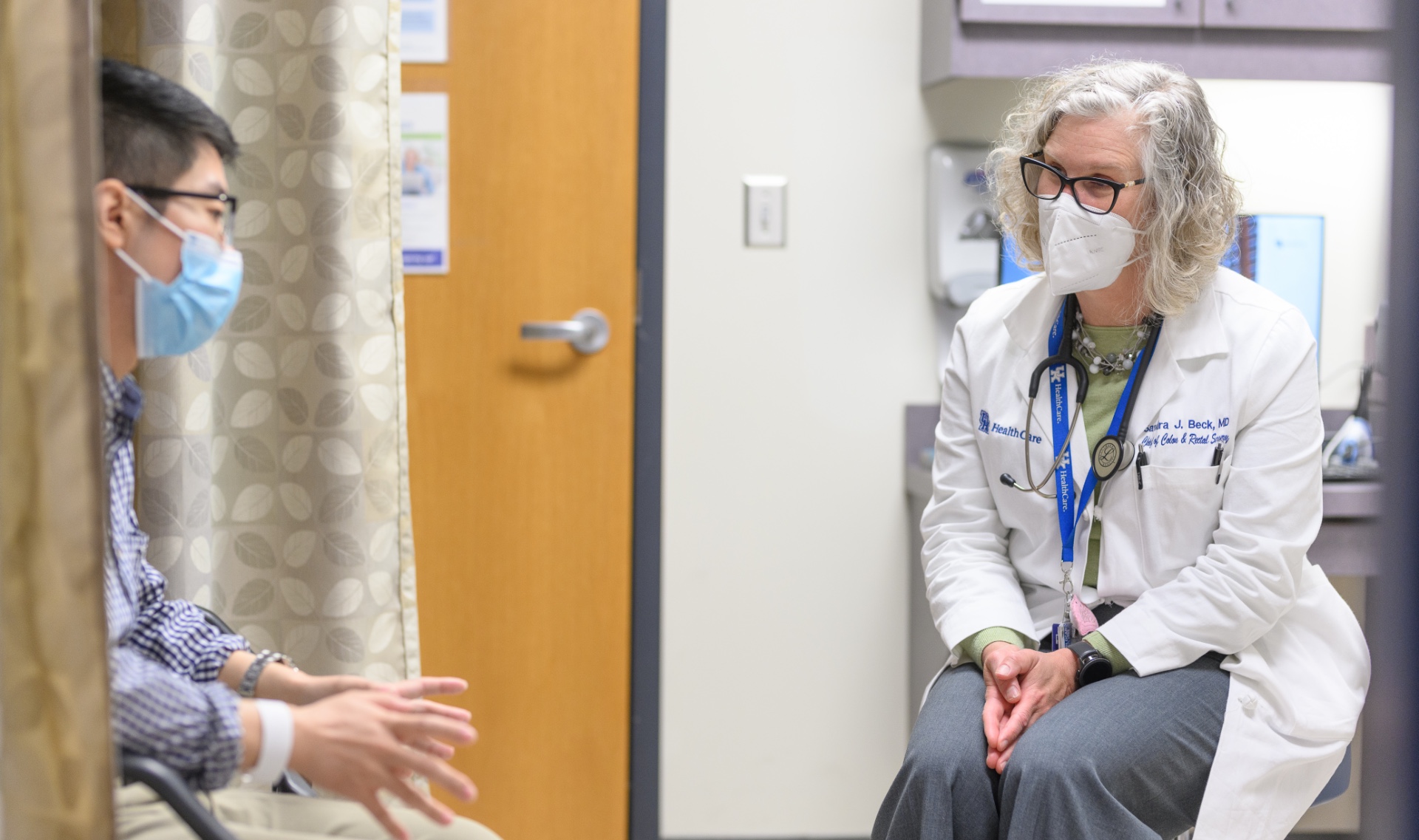 “Don’t freak out,” said Ronnie. “Believe the science and cross your fingers.”

“When you have symptoms, don’t ignore it,” said Ronnie. “Seek care, ask questions and research it. I would say it’s very unfortunate for me, but I feel lucky to be here. I’m just so glad UK HealthCare has comprehensive care and facilities in-house. They don’t have to coordinate with doctors from other hospitals, or I need to go somewhere to see other doctors. I just made one trip to the clinic, and every doctor will be there to see me. It’s very convenient, and also makes the chemo treatment much easier. Believe in your doctor, they know how to take care of patients. The cancer treatment and technologies have advanced dramatically in the past ten years. It gives me hope during the toughest times.” 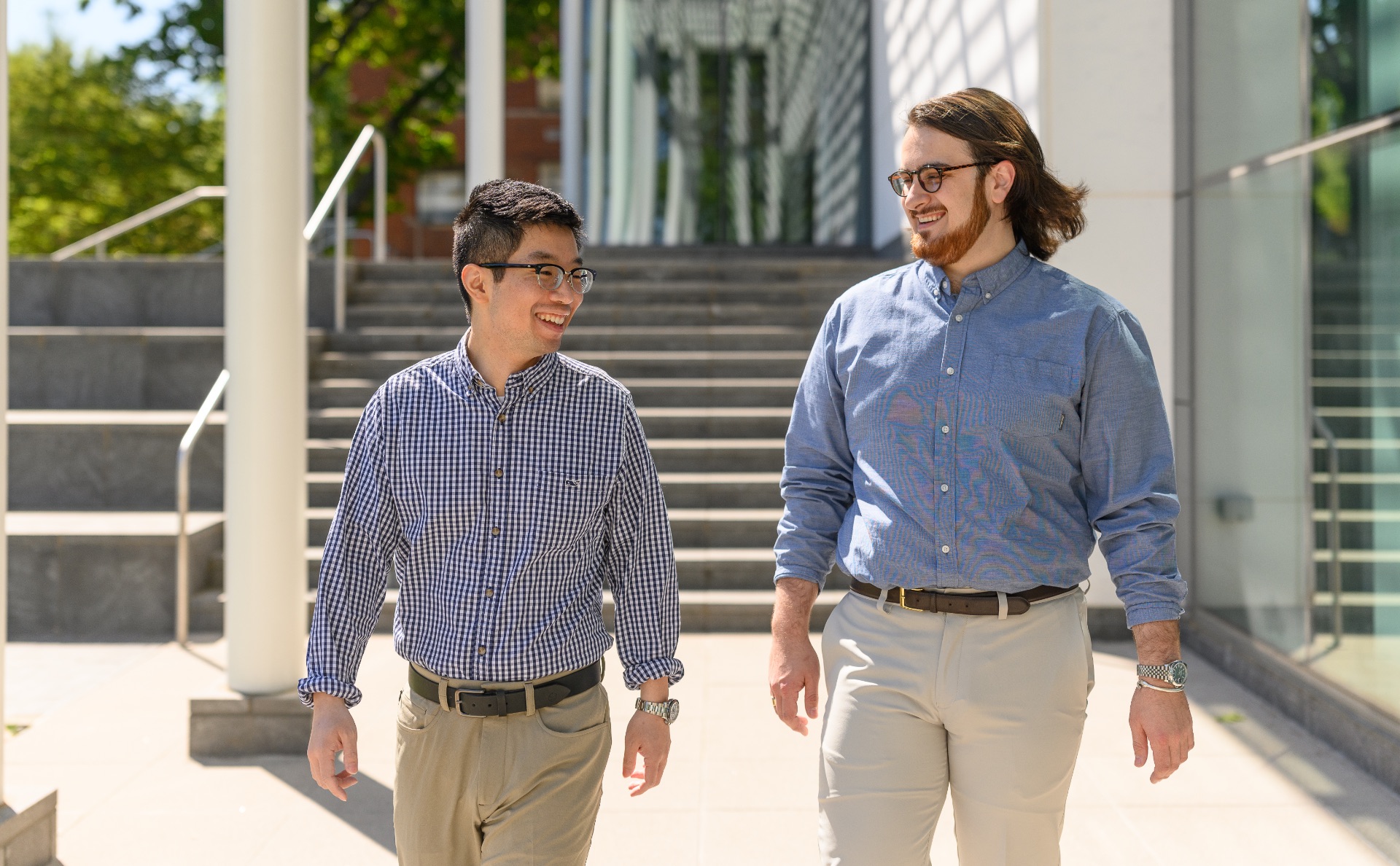 “[My roommate Zack] helps me get food, he cooks—my life would be a whole lot more difficult without him.”

“There’s hope. People need to have hope,” said Dr. Bernard. “Today in healthcare—particularly in a healthcare organization constantly pushing the envelope and finding new answers and new treatments that we didn’t have before—there is always hope. We want to make sure you remember that: hope.” 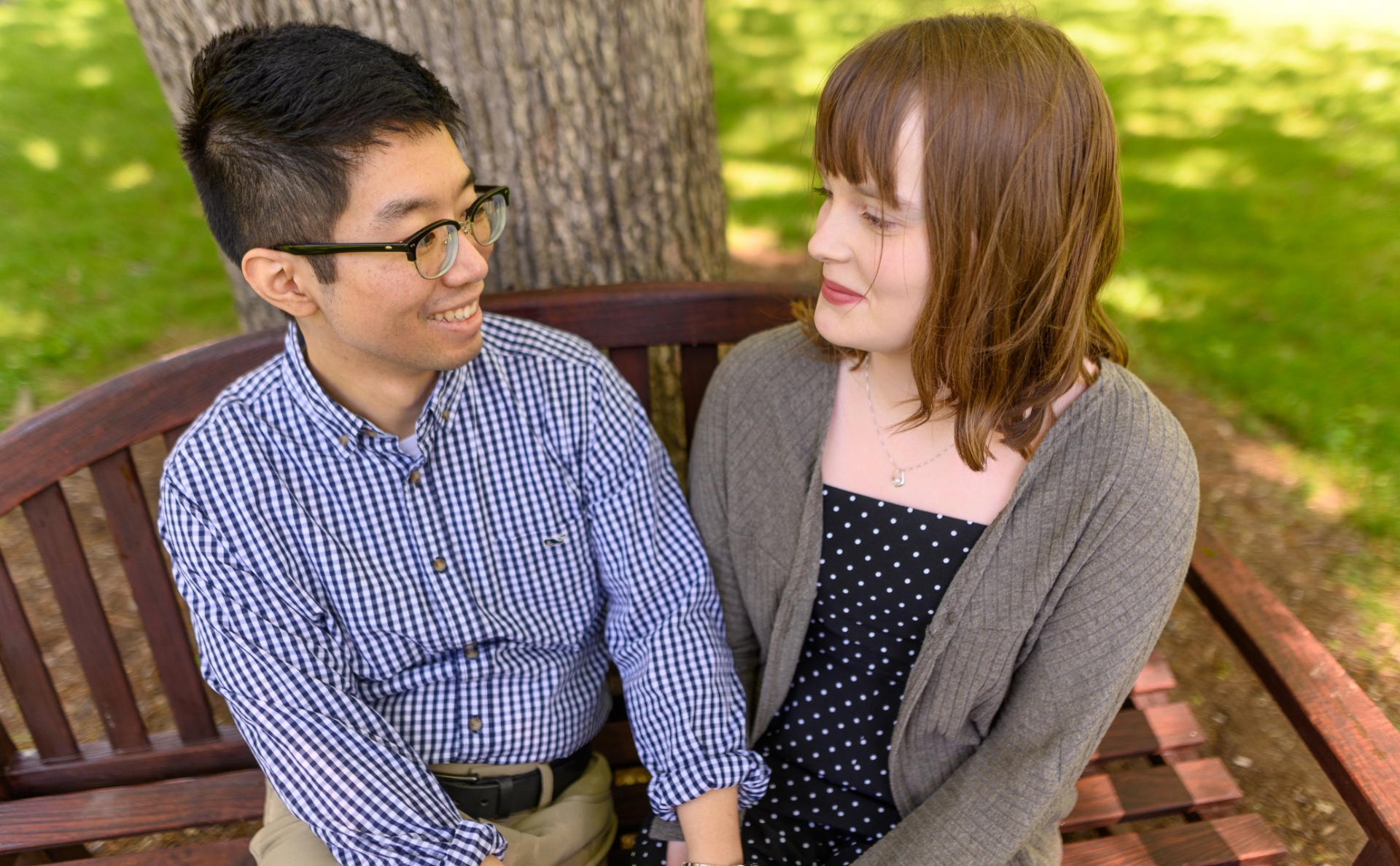 “Ronnie’s girlfriend has been there for him from the beginning of his ordeal.

“Three days before Christmas, I got a phone call.”Emergency Services, Transplant