Timothy Baker had less than 30 minutes to make a decision that would alter his life forever: give his unborn daughter a chance at life, or save his wife, Felicia, and risk losing their daughter. It was an unthinkable decision that he couldn’t make alone.

“I wanted to ask her family what they wanted to do,” he remembered. “They said ‘Even if Felicia doesn’t pull through this, if the baby lives, that’s what she would want.’” Timothy alerted the doctor and they immediately prepared for surgery while Felicia’s family prayed for a miracle. 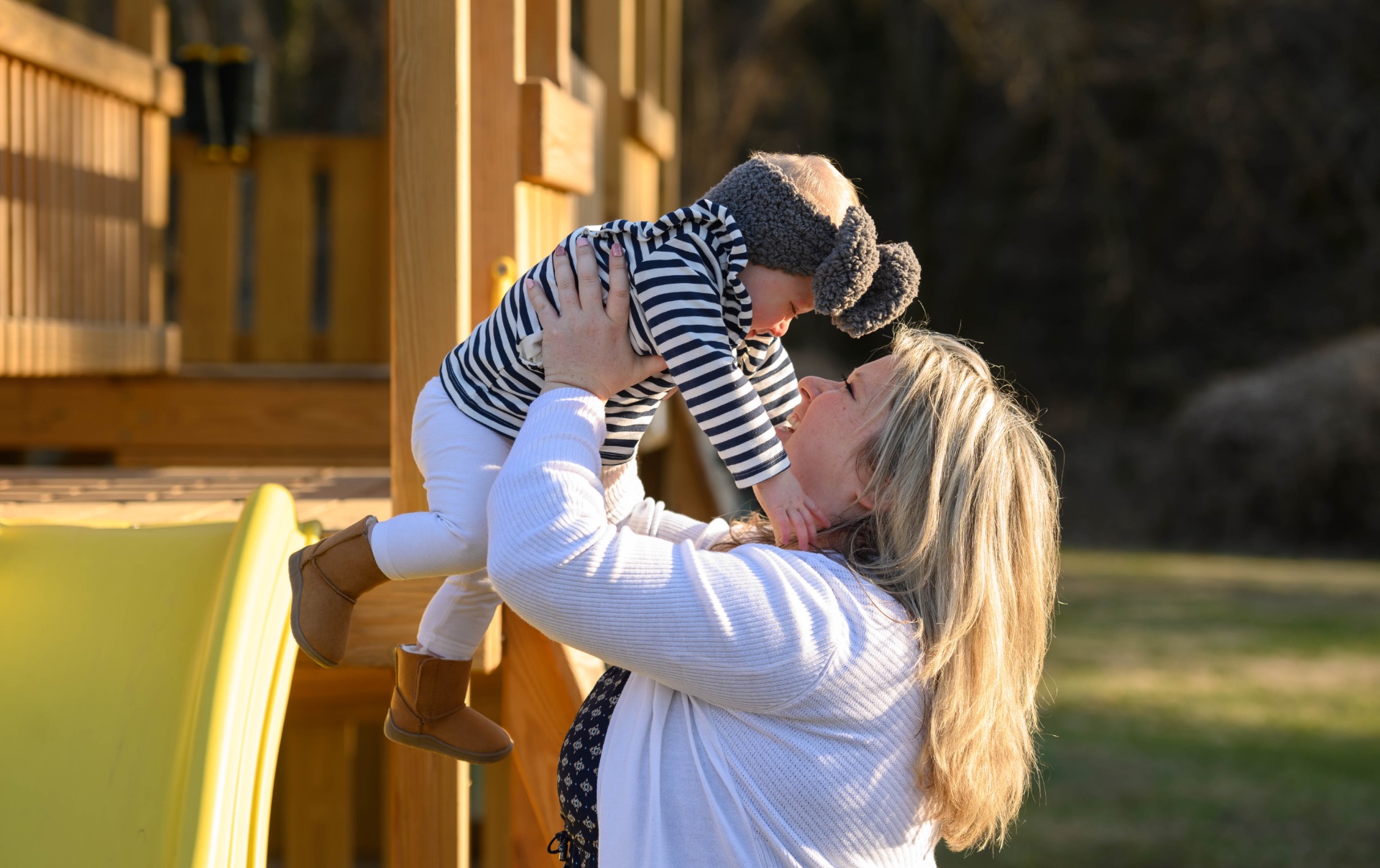 Days earlier, Felicia Baker hadn’t been feeling well. She was six months pregnant, and more tired than usual. She also had a headache that was becoming unbearable. She took some medicine and tried to get some sleep, but woke up feeling even worse, with blurred vision. She began to worry, and so did her husband. Felicia called her mother, a nurse, to describe her symptoms—but before she could fully explain, she began having a seizure. 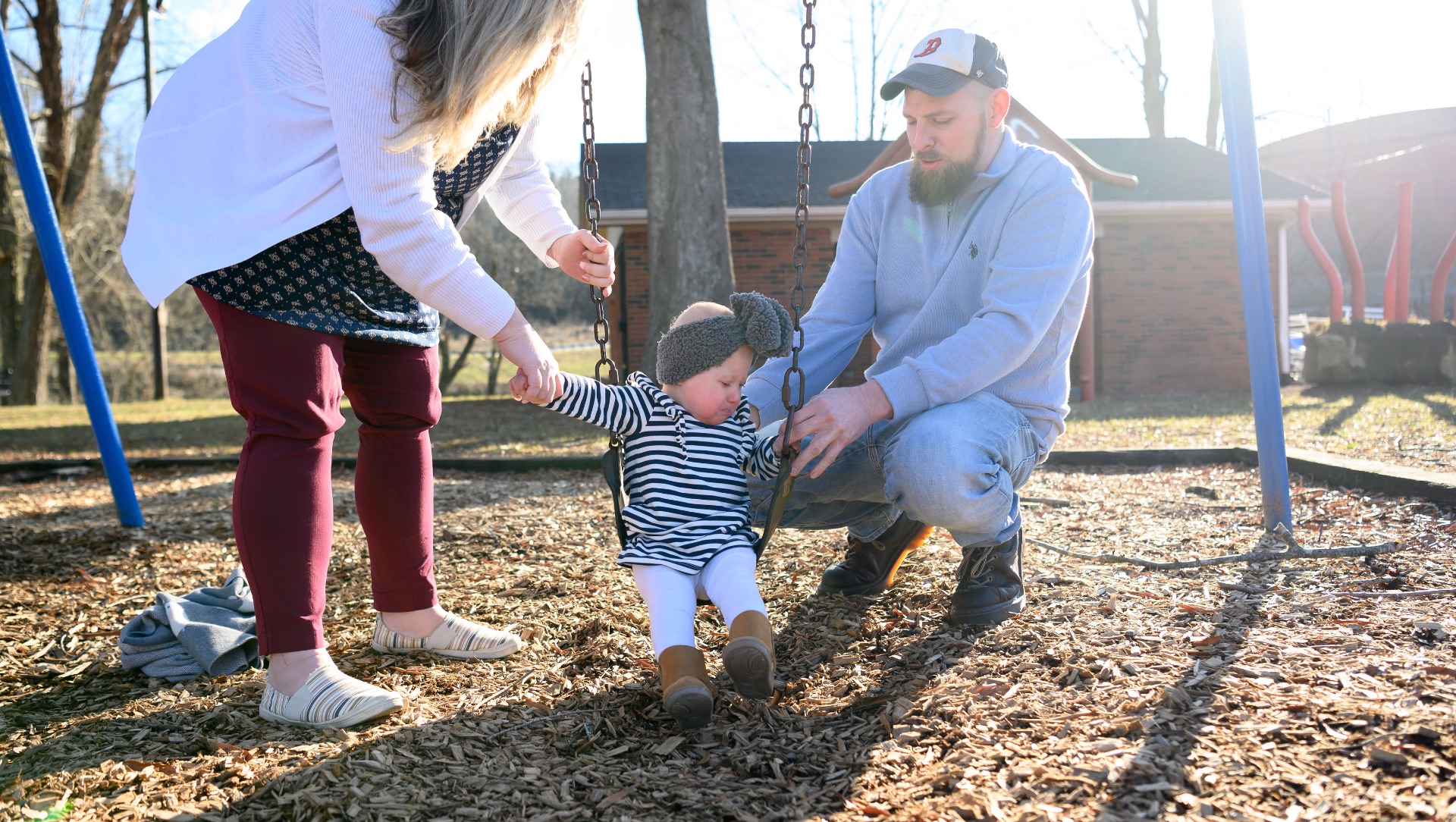 “MaKenzie is very inquisitive about everything she touches. She’s all over the place.”

Timothy dialed 911 and tried to carry his wife to the car. They lived 30 minutes away from the nearest hospital, and he thought meeting the EMTs halfway was the best solution. “I tried to shoulder drag her to the vehicle, but couldn’t get her up into the truck by myself,” he said. “I called them back and told them I couldn’t meet.” He mentioned she was pregnant, which led the ambulance to call for a helicopter to take his wife to UK HealthCare, where Felicia and the baby would have the best chance of survival.

Once at UK HealthCare, doctors examined Felicia and assessed her—and the baby’s—condition. That examination showed that Felicia’s placental fluid had been leaking, and was dangerously low. The baby had to be delivered immediately.

A MedEvac helicopter was the only way to get Felicia to UK HealthCare fast enough to save her and the baby.

Timothy met with Dr. John O’Brien, Chief of the Division of Maternal-Fetal Medicine at UK HealthCare. Dr. O’Brien briefed Timothy on Felicia’s condition, and gave him two options: they could perform a C-section and give both his baby and his wife a 20 percent chance of survival, or Felicia could have a natural birth—giving her a 40 percent chance of survival, but her daughter would be stillborn.

After consulting with Felicia’s family, Timothy opted for the C-section. It was a decision Dr. O’Brien fully supported: “‘I like giving everybody a chance,’” Timothy remembered the doctor saying. “‘I at least want to give her a fighting chance.’” 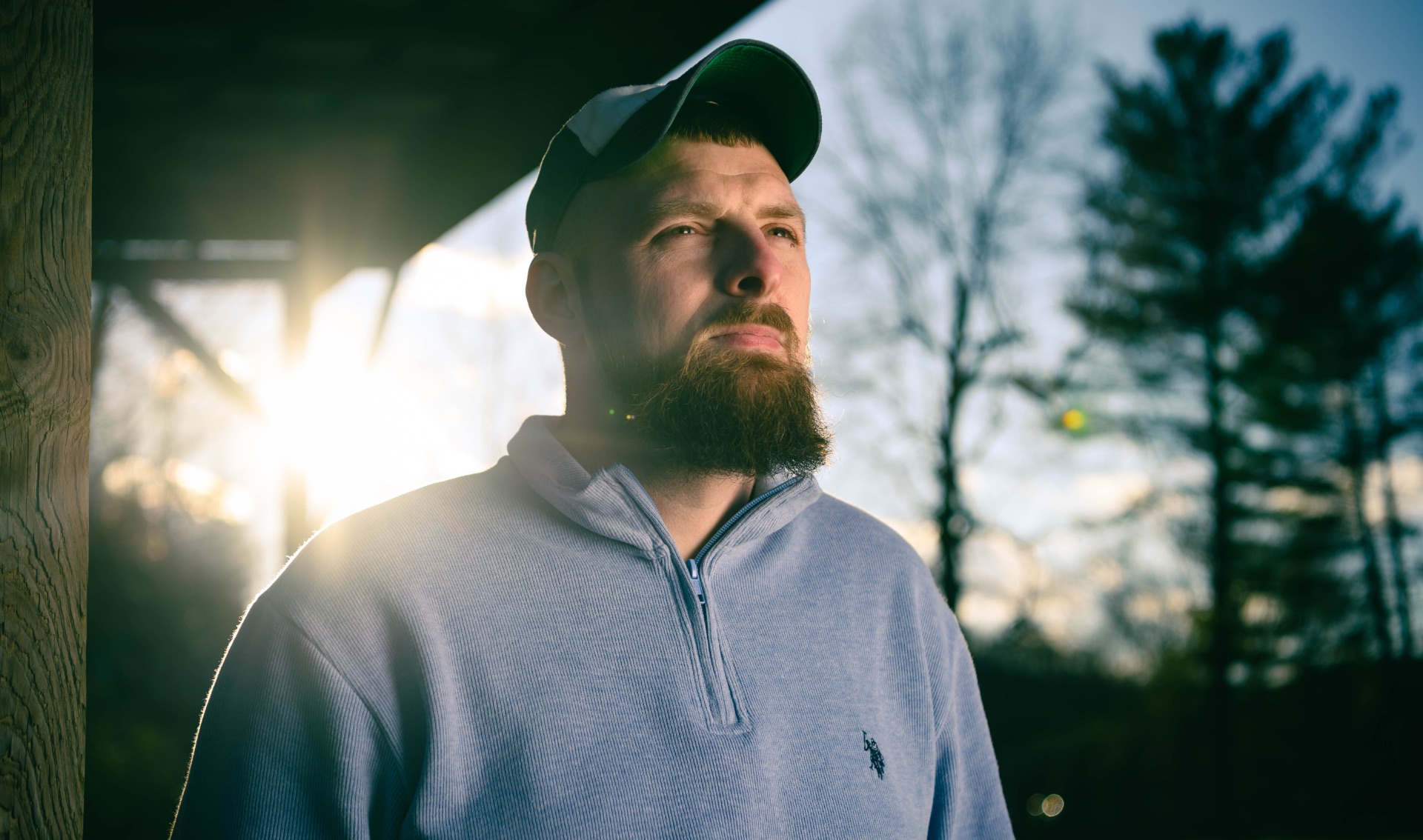 “My whole world was turned upside down at the drop of a hat.”

Forty-five minutes later, both the baby—who they named MaKenzie—and Felicia were alive, but in critical condition. Timothy was able to see his daughter in the NICU, but wouldn’t be able to hold her for another four weeks.

“She could fit in the palm of my hand,” said Timothy. “It was just crazy that I was seeing something this small actually making it through everything.”

For the next few days, Felicia was on a ventilator in the ICU. “They told me if they removed the ventilator, she would really need to fight to stay alive,” Timothy said. That’s exactly what Felicia did when she was taken off the ventilator a week later. Soon after, she moved to the maternity ward and was finally able to meet her daughter—born three months early but already showing her strength and spirit. 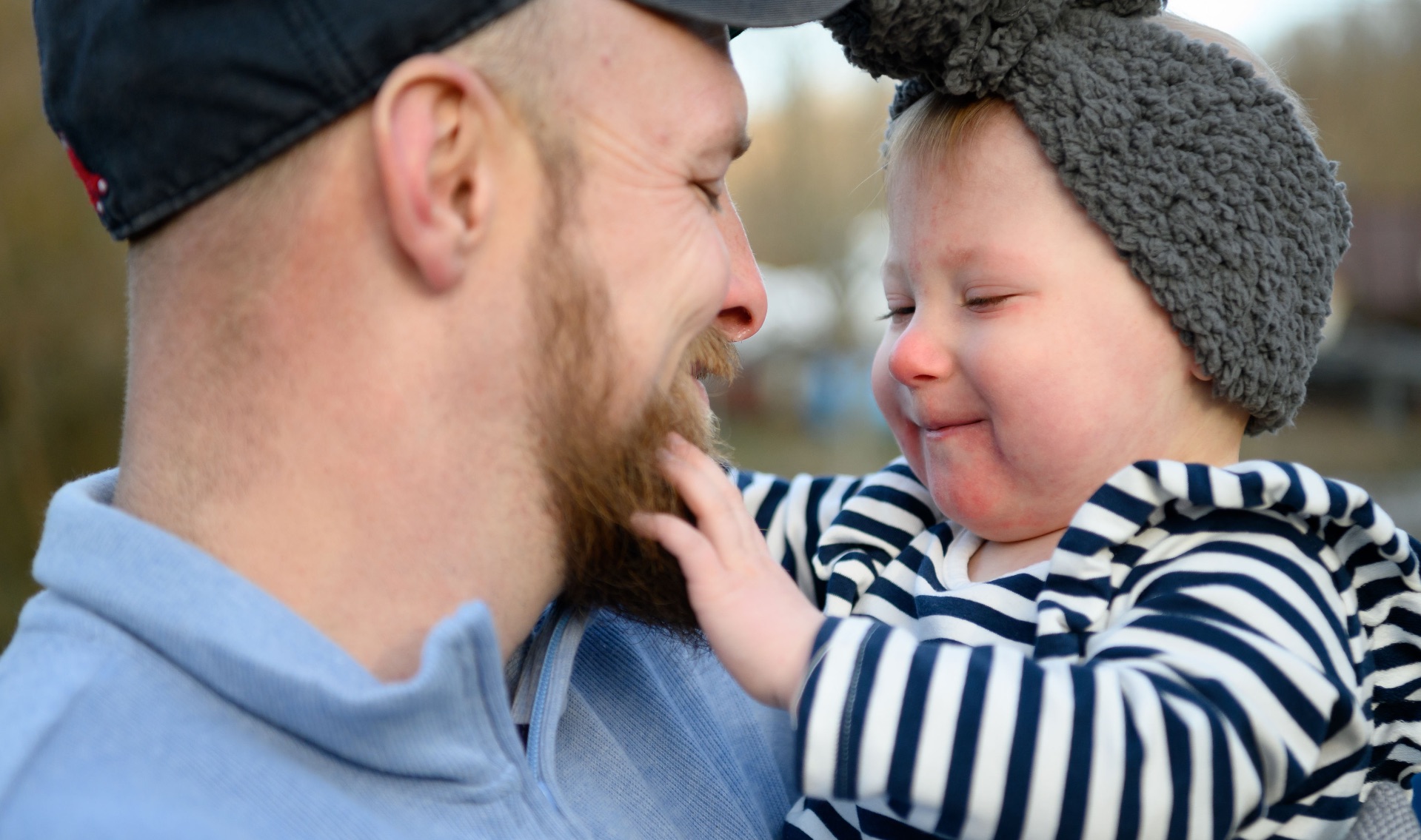 “I’d go to the bathroom and pray, ‘Just let my wife and baby be okay.’”

The Bakers spent the next 110 days in and out of the NICU. MaKenzie was hooked up to a ventilator for her first two months of life. She battled pneumonia. She had a heart surgery to close up her patent ductus arteriosus (PDA), an opening within her heart that normally closes itself soon after birth. But she stayed alive, she kept growing, and she kept beating the odds.

Finally, on October 5, 2019, MaKenzie was cleared to go home. The Bakers were elated. MaKenzie was sent home with supplemental oxygen and a multivitamin that could be put in her milk each day. Over the course of the next fourth months, she needed the oxygen less and less.

By February of 2020, she didn’t need it at all. She could finally breathe on her own. 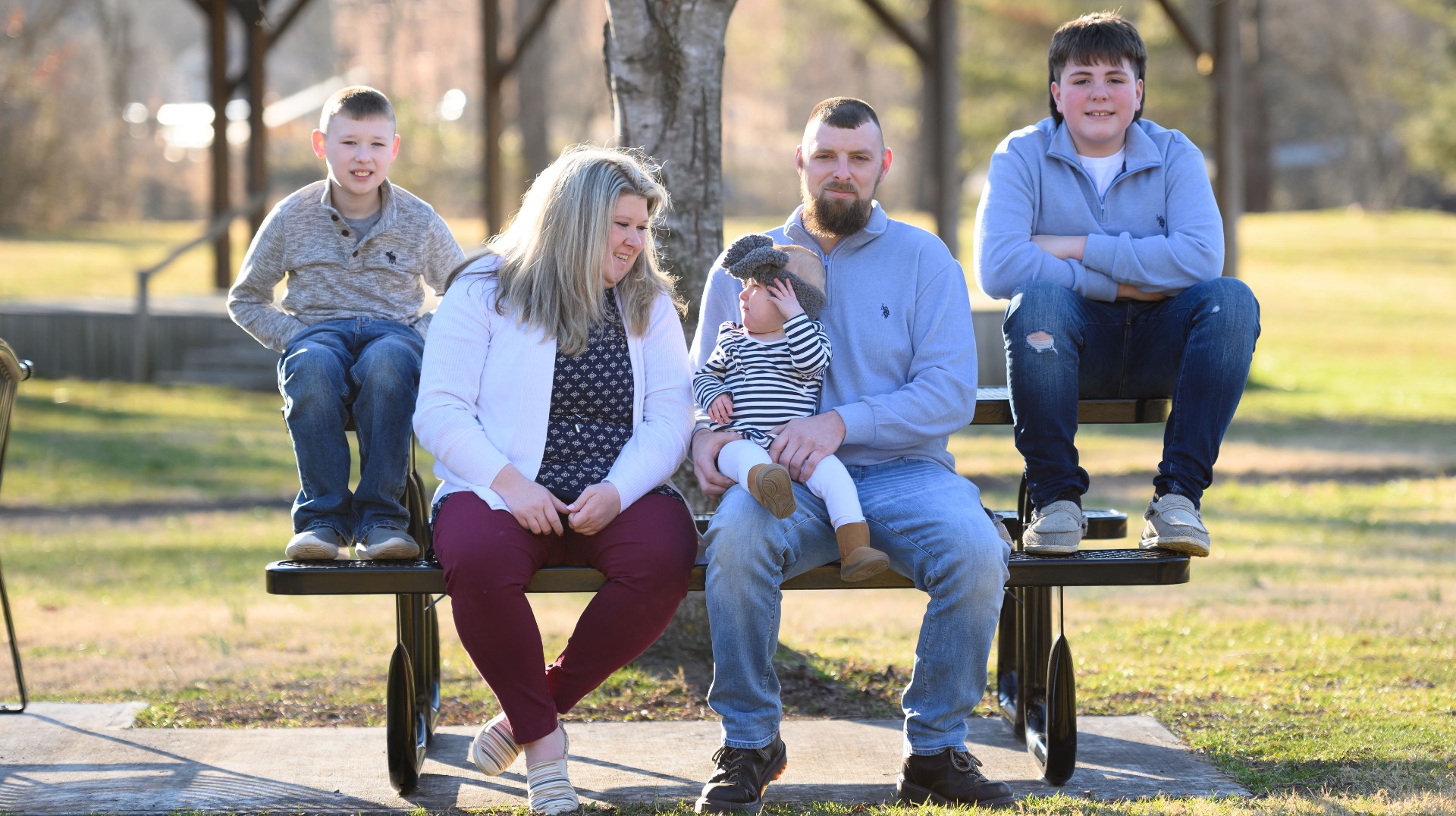 MaKenzie is adored by her family—especially her two big brothers.

Today, MaKenzie is 18 months old and doing well. She isn’t walking yet, but is making great progress in physical therapy. Felicia says MaKenzie’s doctors believe that despite a challenging first few months of life, by two years old, she’ll be right in line with her peers. “She’s got ten teeth now, so she’s starting to eat, she loves to eat,” Felicia beamed. “She’s 22 pounds of pure spunk and sass, and she is very inquisitive about everything she touches. She watches, she checks everything out. She’s such a fighter.” 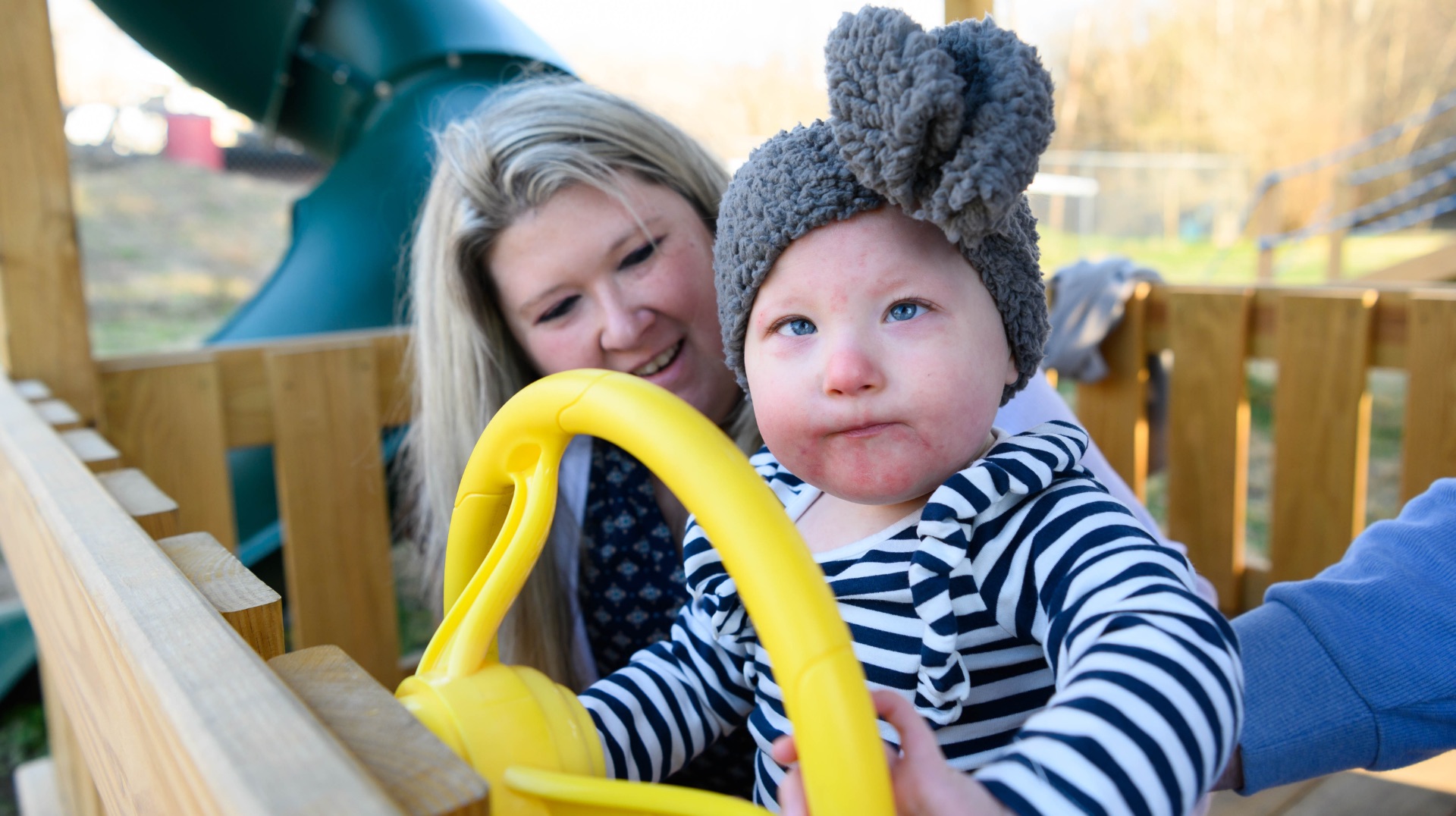 “MaKenzie is hitting milestones that a normal full-term baby her age would. We’re so proud of her.”

Felicia is doing well too, enjoying time with her daughter and her sons: ten-year-old Weston, and 11-year-old Gage, who both adore their baby sister. Although she remembers almost nothing after her seizures began, she says she’s blessed to have lived through such a difficult pregnancy. “The NICU team was wonderful. They became like family,” she said. “I am so very grateful for all that UK has done for our family, and the decisions that were made to save both mine and my daughter’s life.” 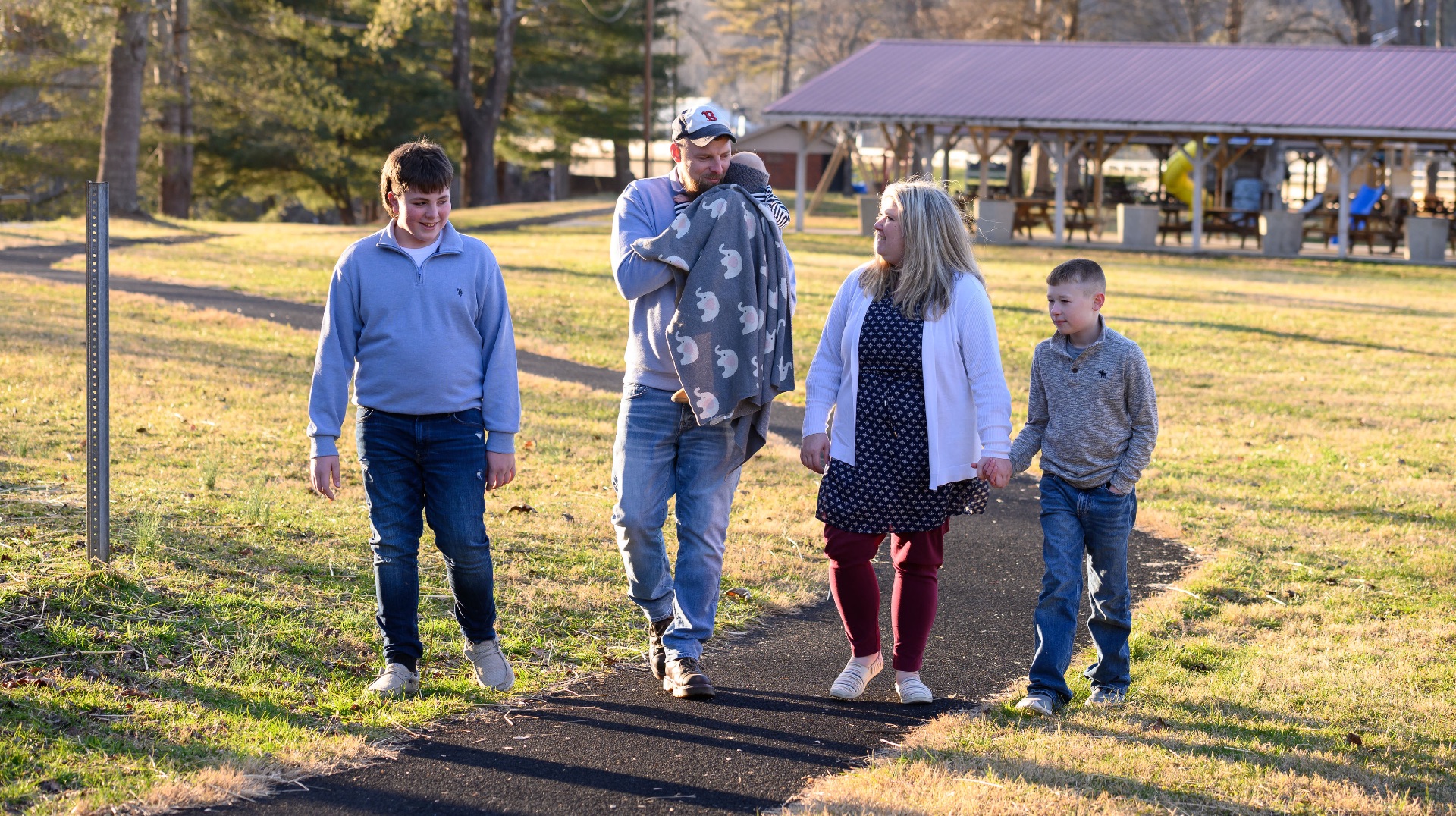 “It took a little bit of time for us, but we can finally say, ‘We got this. She's going to be alright.’”

See how we care for families like the Bakers

“In the PICU for 40 days and 40 nights.”Pediatric Services

“Can I go play?”Pediatric Services