Rory McCamish was seven months old when he was found unresponsive at daycare after suffering a brain aneurysm. He spent the next 40 days and nights in the Pediatric Intensive Care Unit (PICU) at UK HealthCare’s Kentucky Children’s Hospital. His mother and father, Betsey and Tyler, spent each of those days by her son’s side, praying for his recovery and updating loved ones of his condition on Facebook. On the 40th day, when Betsey was able to announce that Rory was moving out of the PICU, she couldn’t help but see the biblical themes in her son’s story. 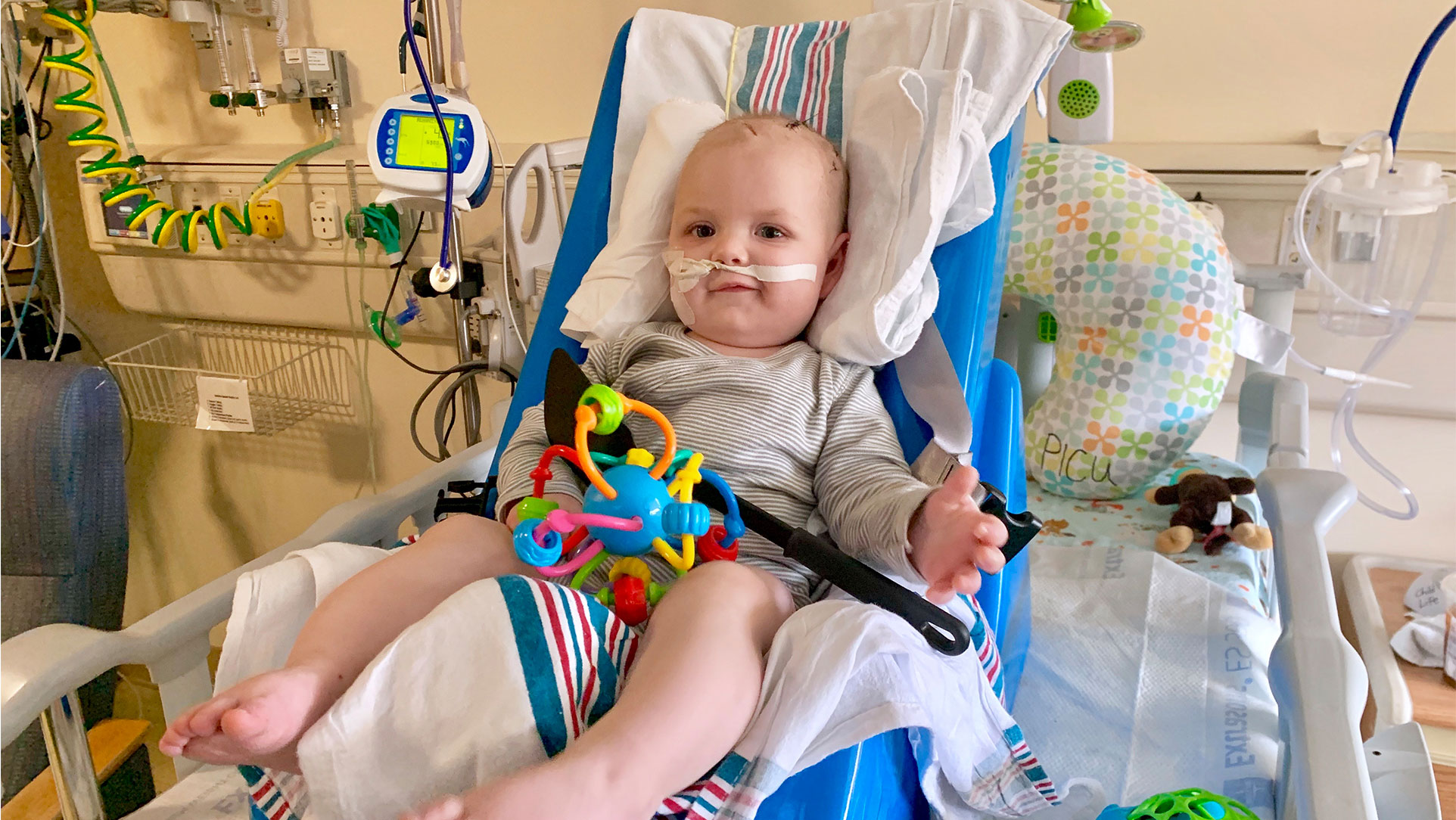 “Rory maintained really good spirits, which is what kept us going the entire time.” 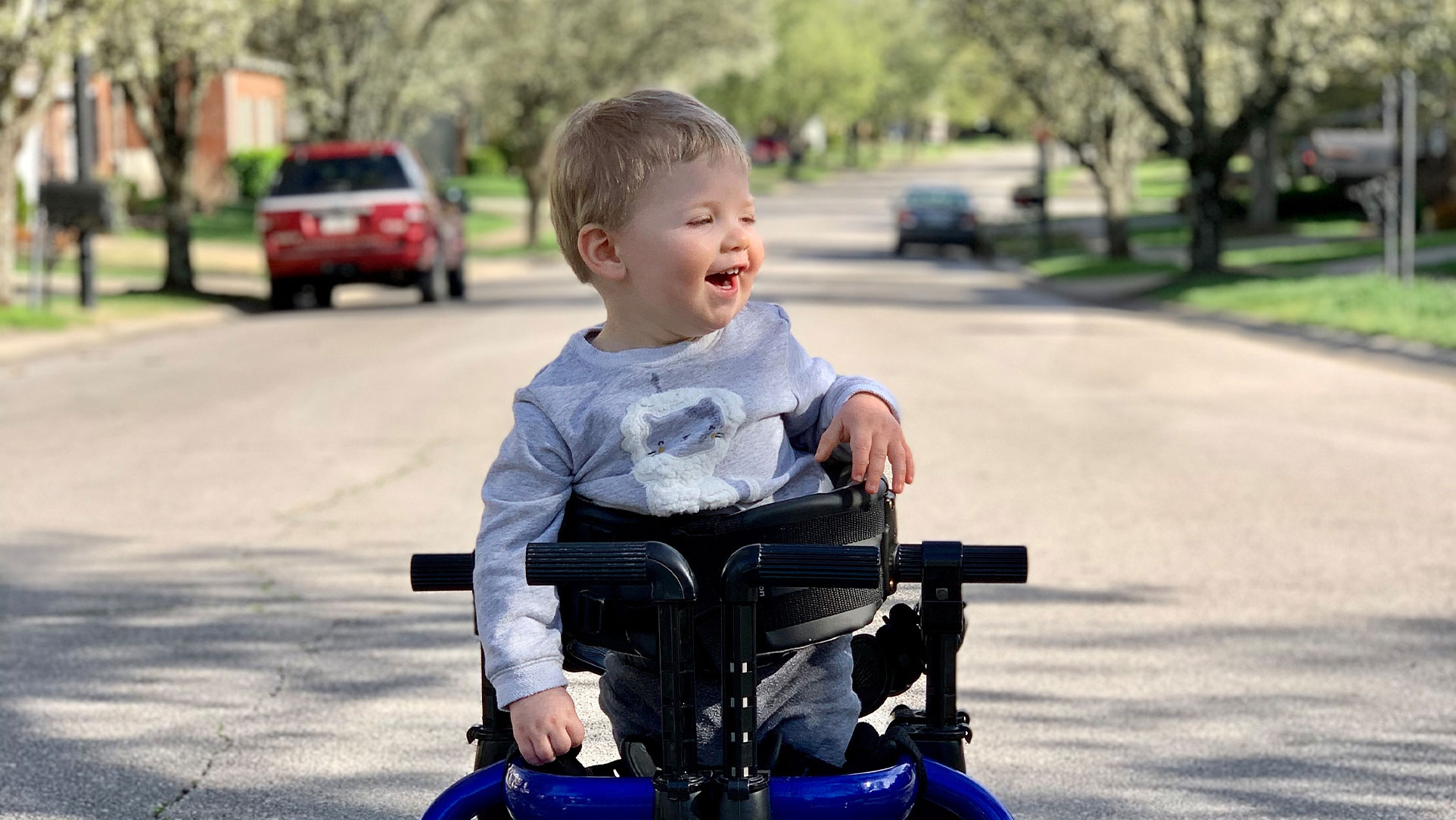 Even after overcoming the unimaginable, Rory still kept his smile.

Those 40 days started with a phone call from Rory’s daycare in April of 2019: he was laying on the floor, he wasn’t responding, and they were calling 911. Like any parent, Betsey was panicked and scared, but hoped it was an allergic reaction and nothing more serious.

“I remember just praying to God, ‘Lord, please get this EpiPen in him as soon as possible,’” she says. “‘Please open up his lungs, open up his heart, allow him to breathe.’ I didn’t think anything else of it, because there’s no history in our family of any kind of brain disease, aneurysms, or strokes. He was perfectly healthy.” 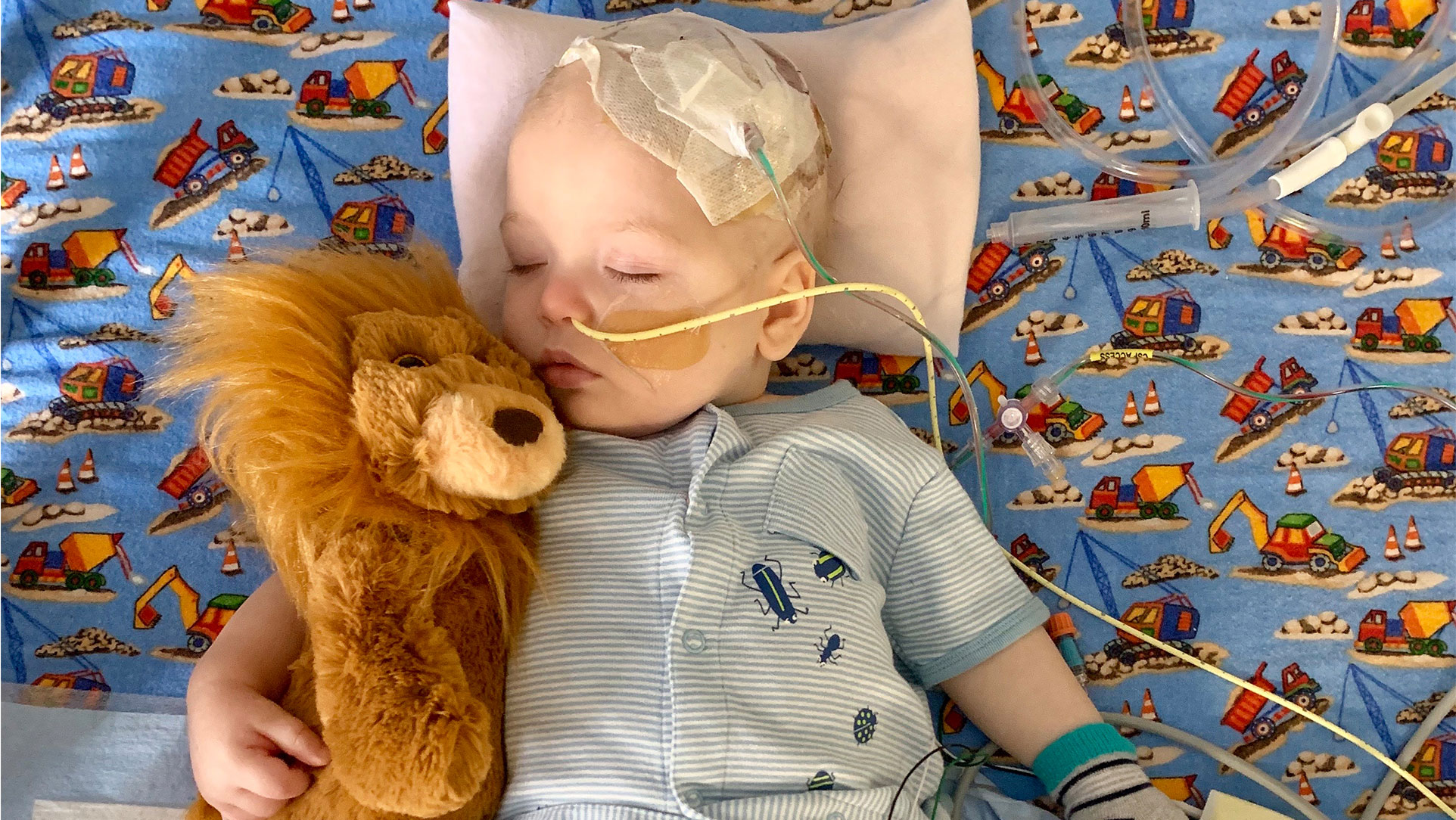 Rory was in the hospital for 56 days—40 of which were in intensive care.

It was not an allergic reaction. Rory was suffering from a ruptured brain aneurysm that led to bleeding in his brain—a condition that is very rare in infants. The first 48 hours after that 911 call were both terrifying and miraculous, Betsey says. Once Rory was taken to the PICU at Kentucky Children’s Hospital, he was connected to a series of machines to monitor his health and vital signs, and was given a breathing tube. After the first day, Rory’s doctors saw such an incredible turnaround in his condition that they began to remove him from some of the machines—but then the seizures began. “From there, it was really a rollercoaster ride,” Betsey says. “He’d recover really well and then something would happen, and he’d recover really well again and something would happen.” 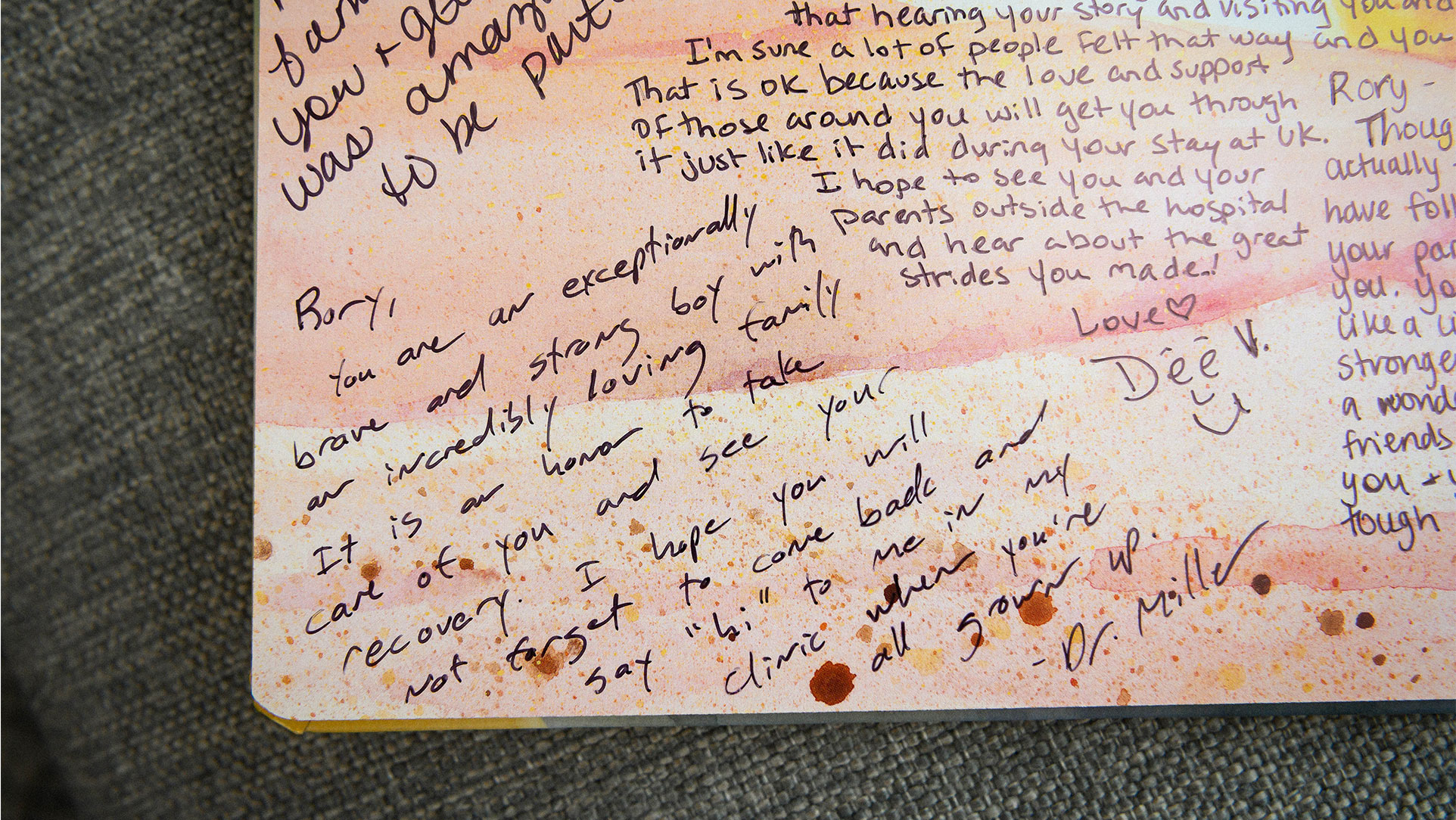 Rory’s book, The Very Brave Lion, is filled with well wishes from his doctors and nurses.

Throughout his 40 days in the PICU, Rory suffered multiple seizures, caught a respiratory virus, fought meningitis, went through several trials to remove the drain from his skull, and had an emergency craniotomy—the surgical removal of part of the bone from the skull to reach the brain. By the end of his time in the unit, Rory had suffered multiple strokes on both his right and left sides of his brain. As a result, he was diagnosed with hemiplegia in his right side—he had paralysis on the right side of his body. Almost a year later, Rory received a second diagnosis of cerebral palsy, a lifelong motor disability that can affect a person’s body movement and muscle coordination, including abnormal stiffness and weakness, balance, developmental milestones, and speech. 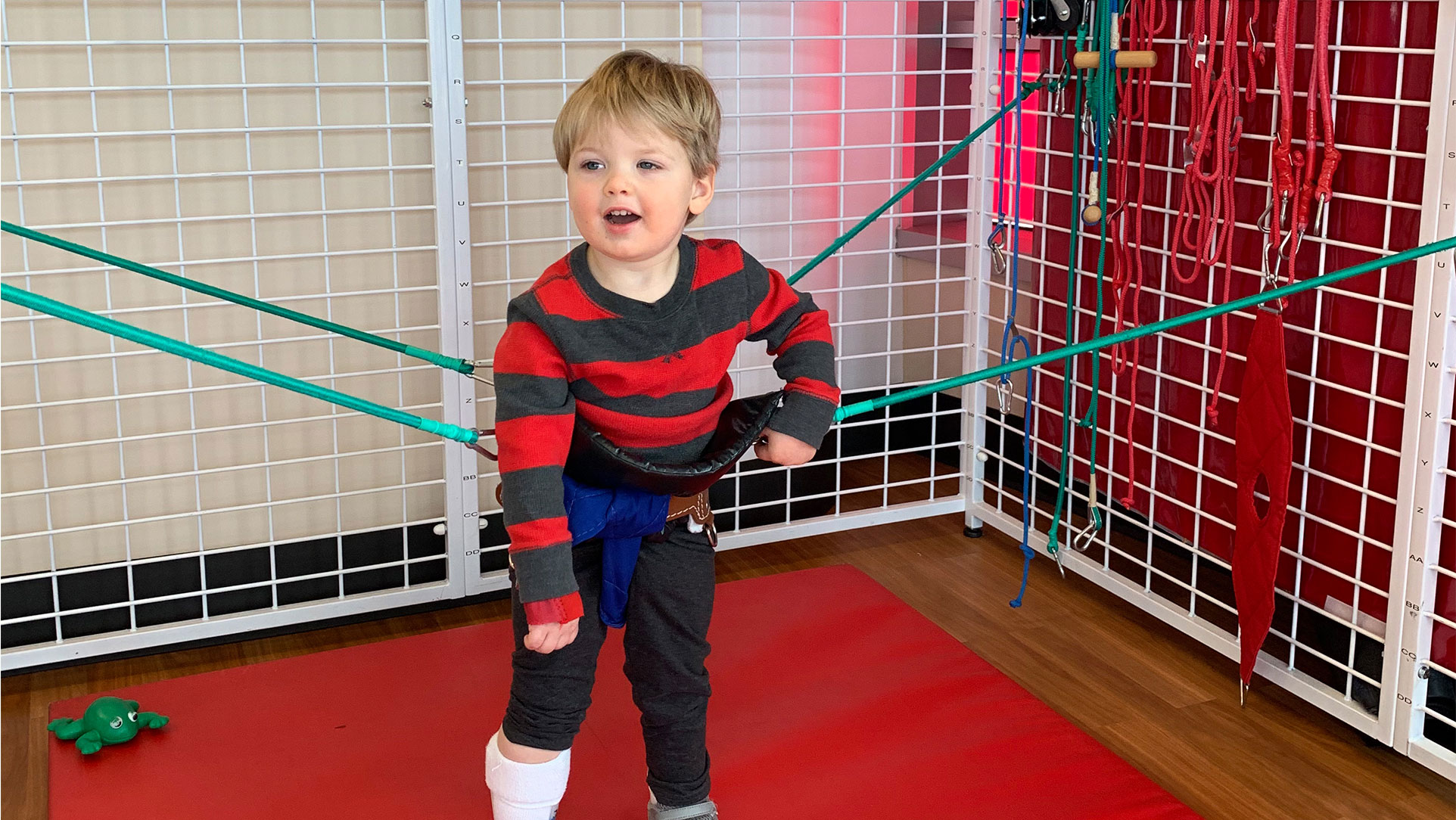 “The stroke hit him so badly that he basically had to relearn everything.”

But despite his challenges, Rory’s health and strength improved. After graduating from the PICU, he spent 26 more days in progressive unit, and then to the acute unit, where he began the uphill climb to regain everything he’d spent the first seven months of his life learning.

“That stroke hit him so badly it was basically like he was an infant and had to relearn everything,” Betsey explains “He couldn’t even hold his head up. He couldn’t lift one of his arms. He couldn’t hold a toy or any object in his right arm. He lost his sucking reflex and couldn’t even suck on a bottle. He was like a big nine-month-old newborn.” 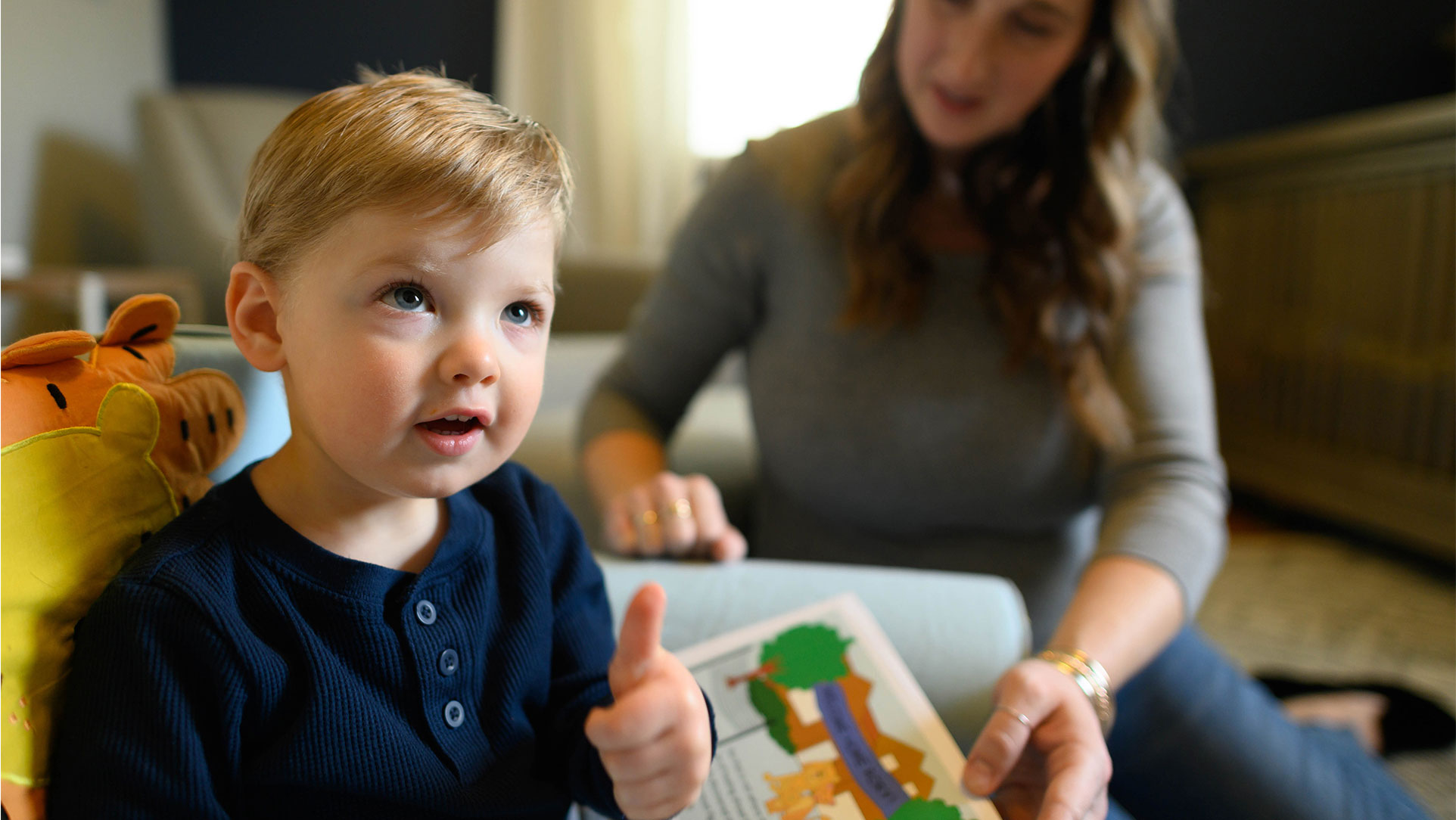 “Everyone believed so much in Rory and in his recovery.” 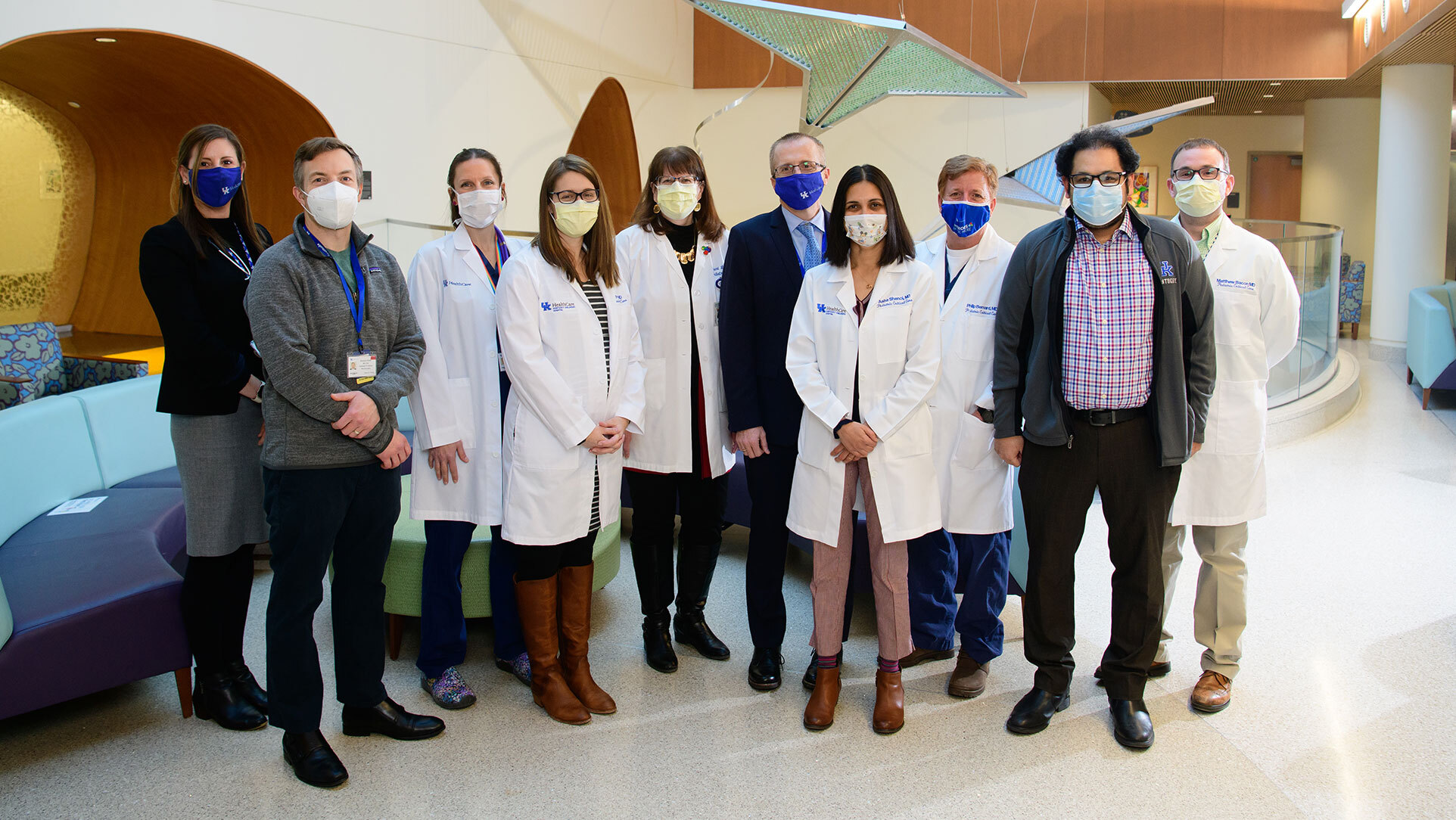 “The team stood alongside us and made sure that we had the emotional and physical strength to get through.”

“Rory’s entire team, including the nurses, physical therapists, nurse care managers and social workers believed so much in Rory and believed in his recovery and saw what he was capable of recovering from,” Betsey says. “That’s something I’ll be forever grateful for. It gave our family the boost and the encouragement that we needed to really begin this lifelong battle that we’re still continuing today.” 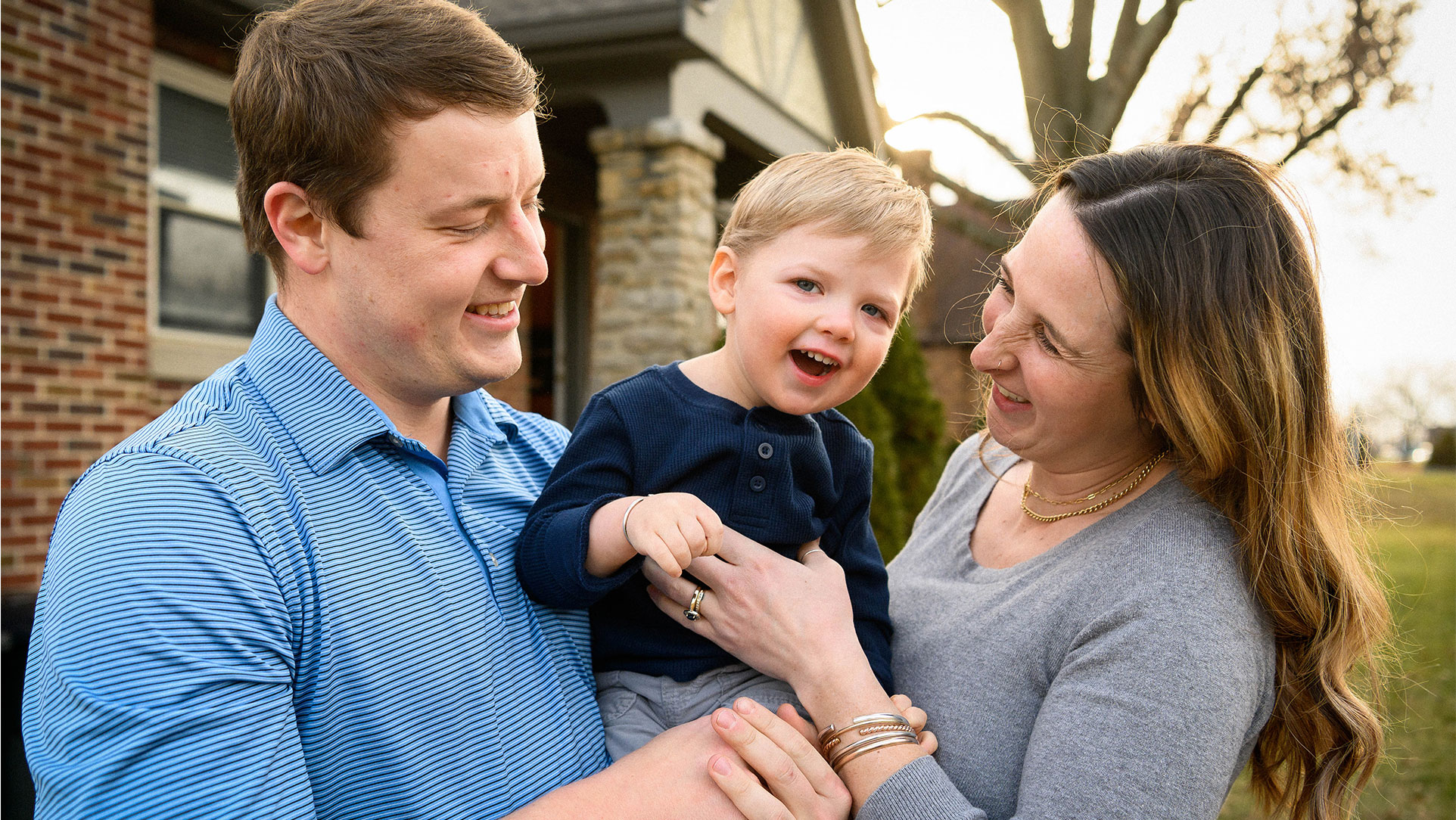 Betsey documents Rory’s journey so other families with similar experiences know that they're not alone.

Now, Rory is back at home with his mom and dad. Their family welcomed Rory’s baby brother, Wells, in February. When he’s not loving on his little brother, Rory participates in physical therapy, occupational therapy, speech therapy, aquatic therapy, and an early intervention program weekly. After more than a year, Rory graduated from feeding therapy in Fall 2020, is completely weaned from using his feeding tube, and is eating 100% orally. Rory has even been able to use his right arm for small things like pressing a button on toys, and is able to walk short distances with assistance—all things the doctors weren’t sure would be possible when he was first admitted. 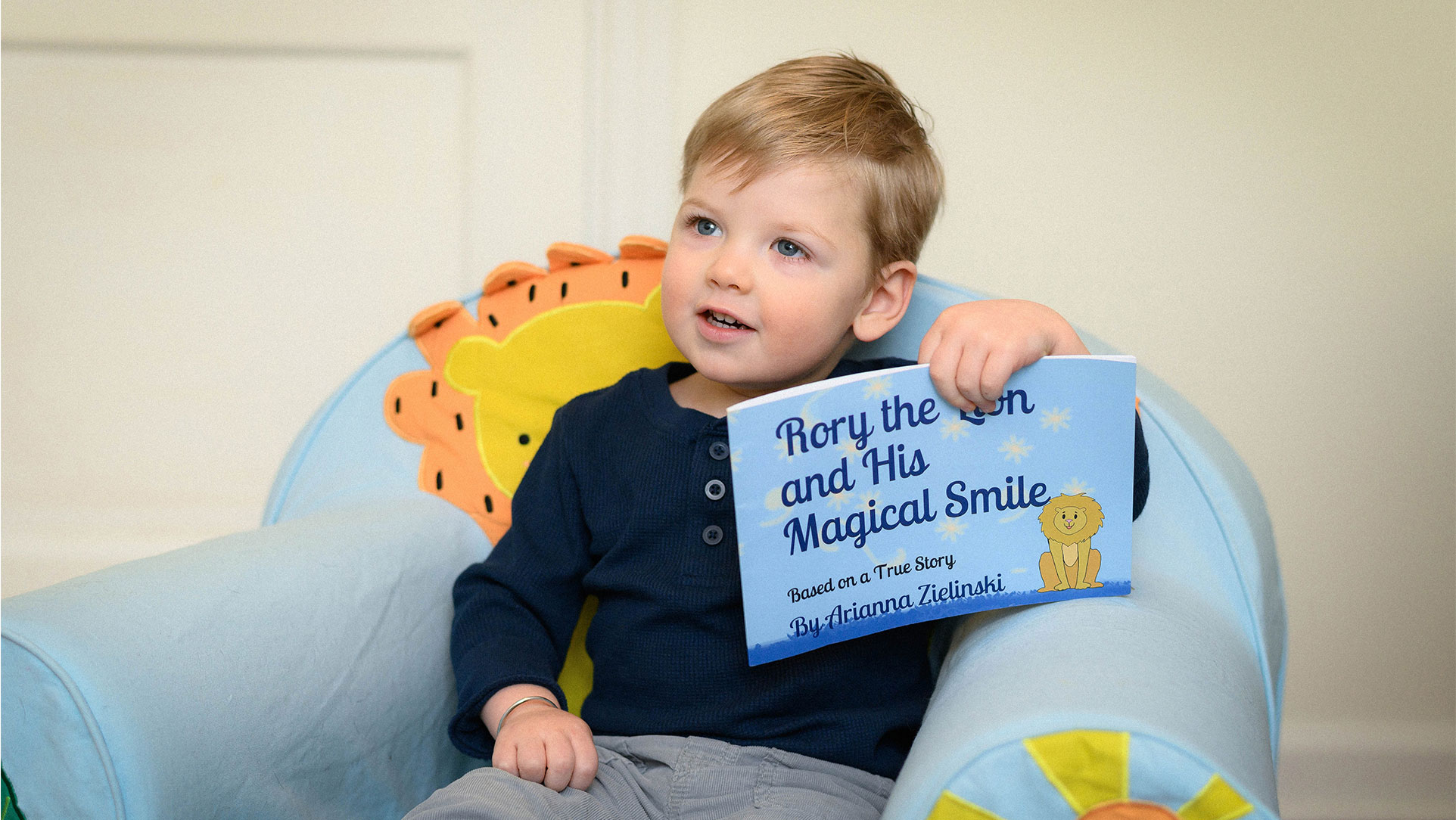 In the hospital, Rory was known as the “brave little lion” by his care staff.

Rory’s recovery has inspired others, both through Betsey’s regular updates on social media, and through a book written by his cousin, Arianna Zielinski, called “Rory the Lion and His Magical Smile.” A portion of the proceeds from the book’s sales benefit the Child Life program at Kentucky Children’s Hospital. Wherever people are reading about Rory, Betsey hopes her son’s story can serve as a testimony for other families experiencing similar things. 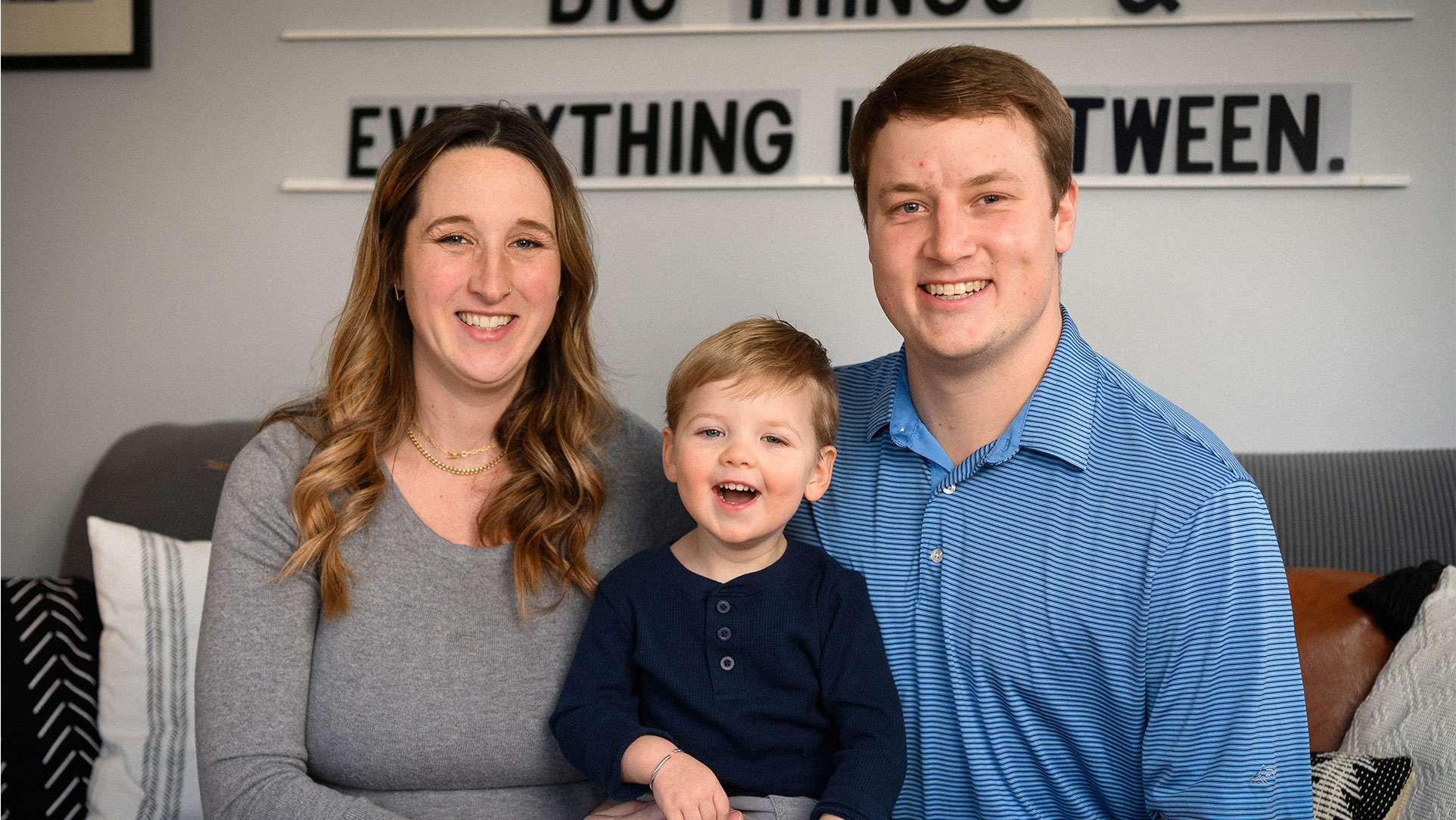 “I don’t feel like you should ever compromise.”Heart, Moms