When Marshall Gei was a toddler, his dad stood him up in the garage, taped his feet down so they wouldn’t wiggle too much, handed him a bat, put a ball on a tee, and told him to swing. “In a way, I started playing baseball before I even really knew what it was,” he says. “My dad really drilled it into me.” 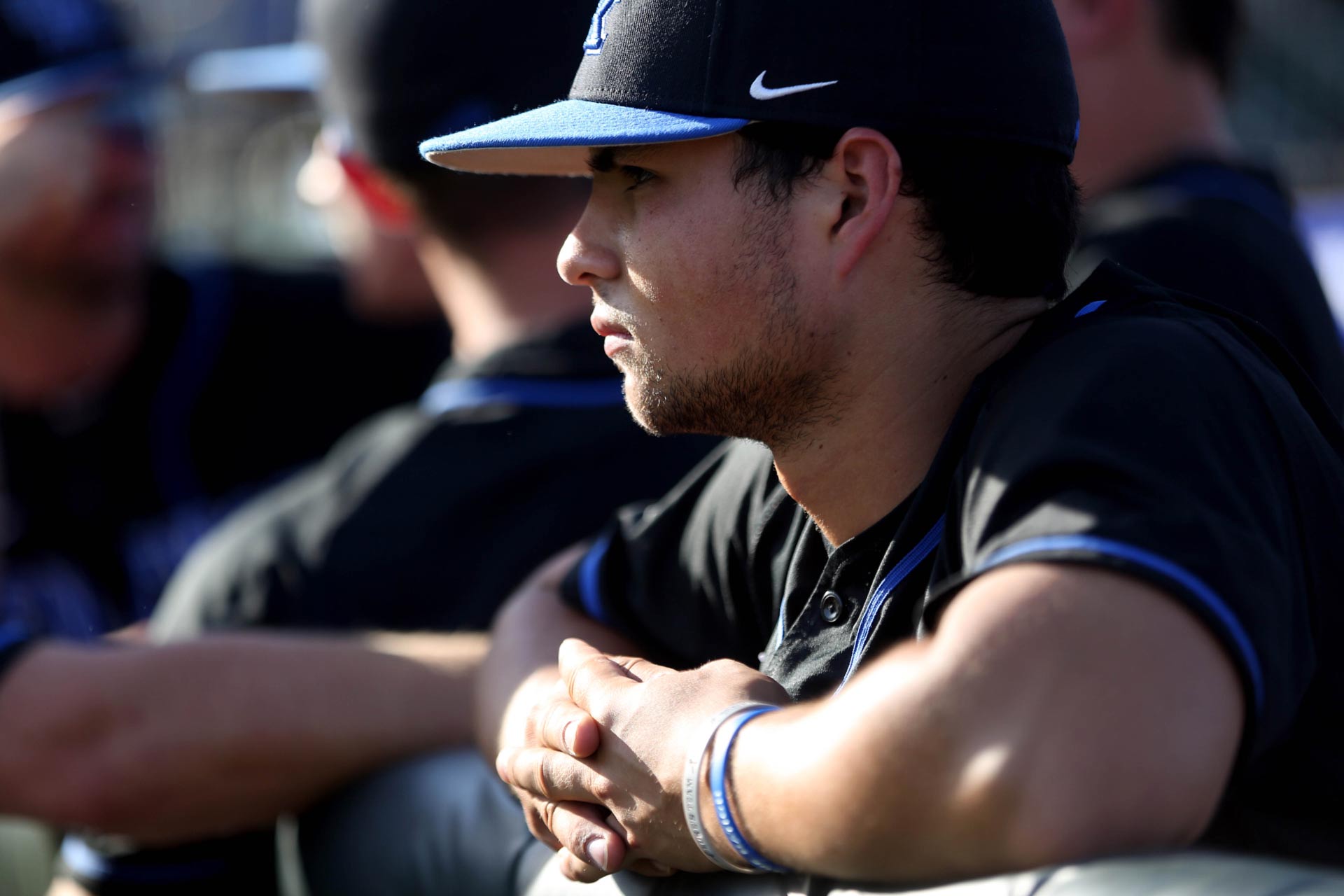 “I just wanted to challenge myself but also be surrounded by some guys that can really play.”

Those early lessons paid off. Marshall played baseball all throughout high school and college, serving as a catcher for the University of Kentucky Wildcats. During his time on the team, he appeared in 141 games during regular and summer seasons, maintained a 4.0 grade point average all four years of undergrad and was named to the 2019 Google Cloud Academic All-America Team—an honor that recognizes the country’s top student-athletes for their performances on and off the field. Marshall is only the fourth player at Kentucky to receive this honor. But his real passion went beyond the stadium—tying together baseball, medicine and his future career. 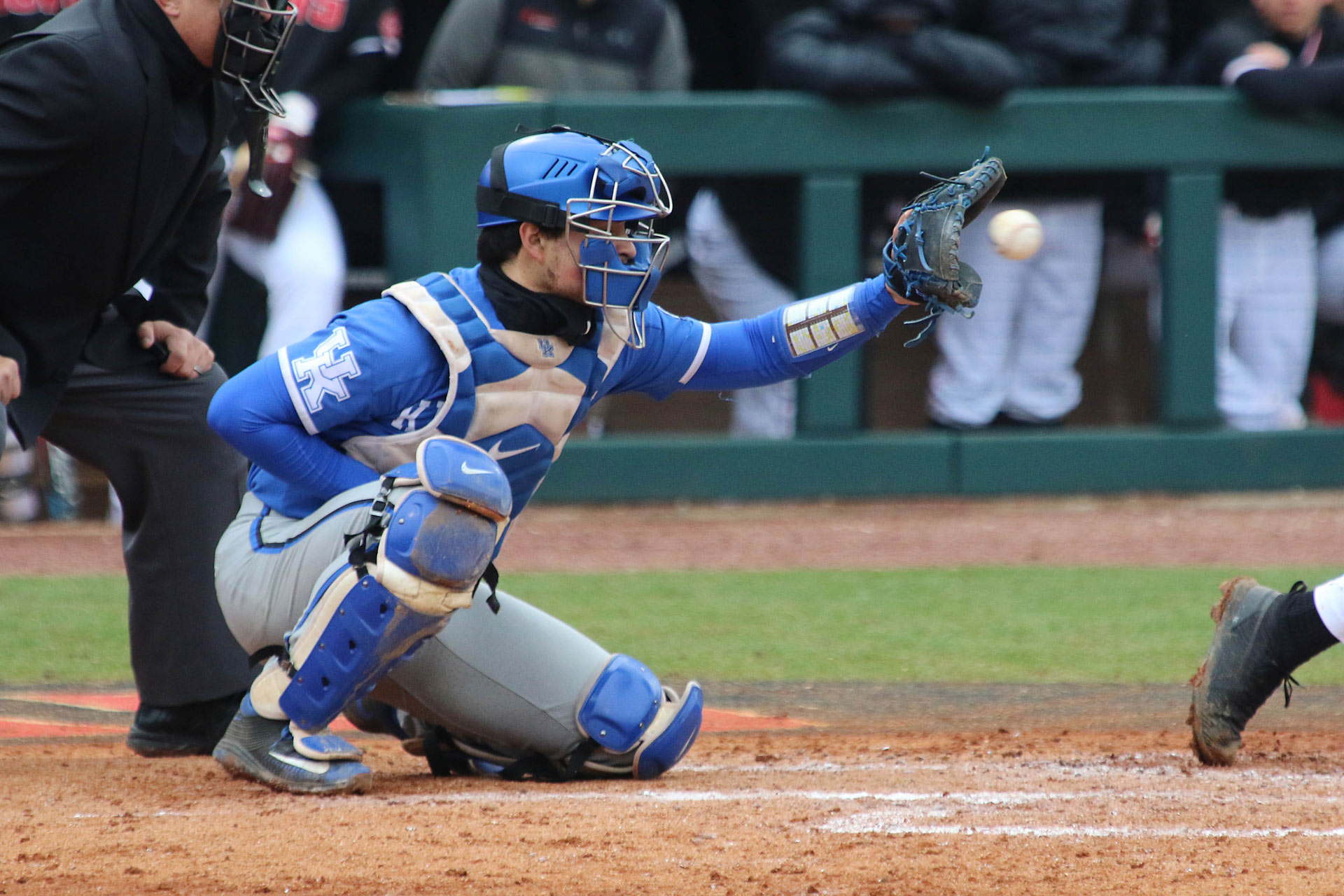 “I really appreciate the baseball program helping me to understand what it means to be a leader and team player.”

That guiding thread was Marshall’s deep love of physics, which he’s been studying since he was a teenager. “In high school, I had teachers that really captivated me in the subjects of physics and chemistry,” he says. “They made me want to do more and learn more about it by taking a subject that wasn’t based on your success, but more about you being interested by it.” 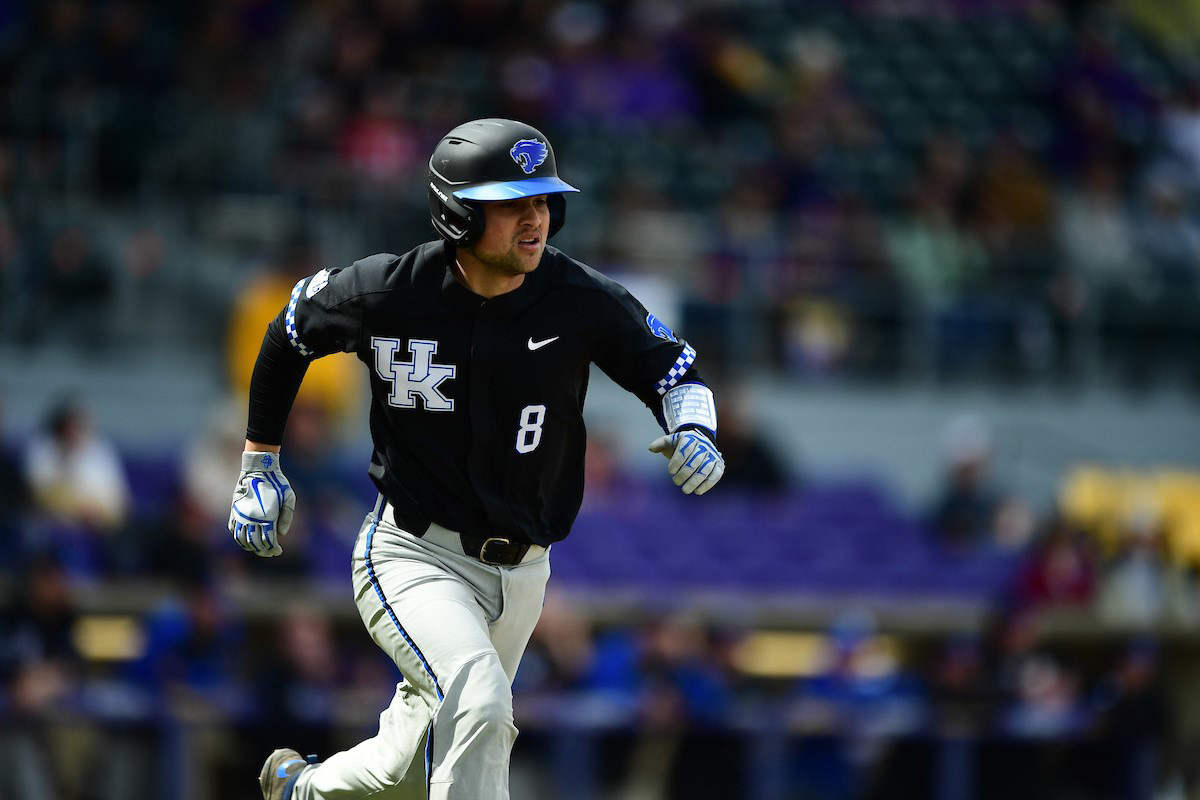 “I love baseball. I never want to stop playing. But at the end of the day, it's going to have to end at some point.”

As an undergraduate, he majored in physics, which opened up a new world of possibilities for his studies and his career. He even applied some of what he learned in the classroom to his time on the field. “When I was a catcher, I’d have to work with our pitchers. Understanding physics allowed me to communicate in a different way with them—the concept of aerodynamics, the rotation of a ball, understanding spin rates, how you want the ball to spin, it all affects how a pitch can be perceived by a hitter.” 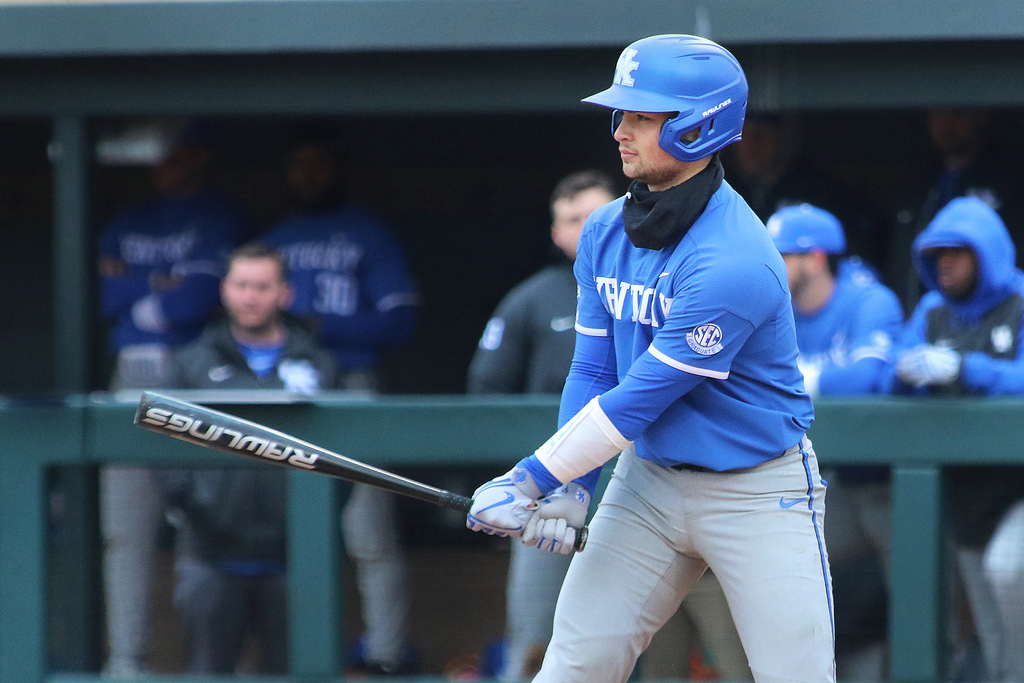 “I had teachers that really captivated and pushed me forward into just wanting to do more and learn more.”

After college, Marshall enrolled in the University of Kentucky’s Master of Science in Radiological Medical Physics program. He began in 2018 and finished his coursework in May 2020. In July, he started the next phase of his education: a medical physics residency at UK HealthCare’s Markey Cancer Center in the Department of Radiation Oncology—a well-regarded program that’s been educating medical physicists since the 1960s. Marshall is one of four residents, in addition to six radiation oncology residents and another twenty or so PhD and Masters students studying medical physics. Over the next two years, Marshall will complete 10 to 12 rotations where he’ll learn about the different machines used to treat tumors and care for cancer patients, all while working in a collaborative hospital setting alongside medical professionals and learning what a medical physicist does. 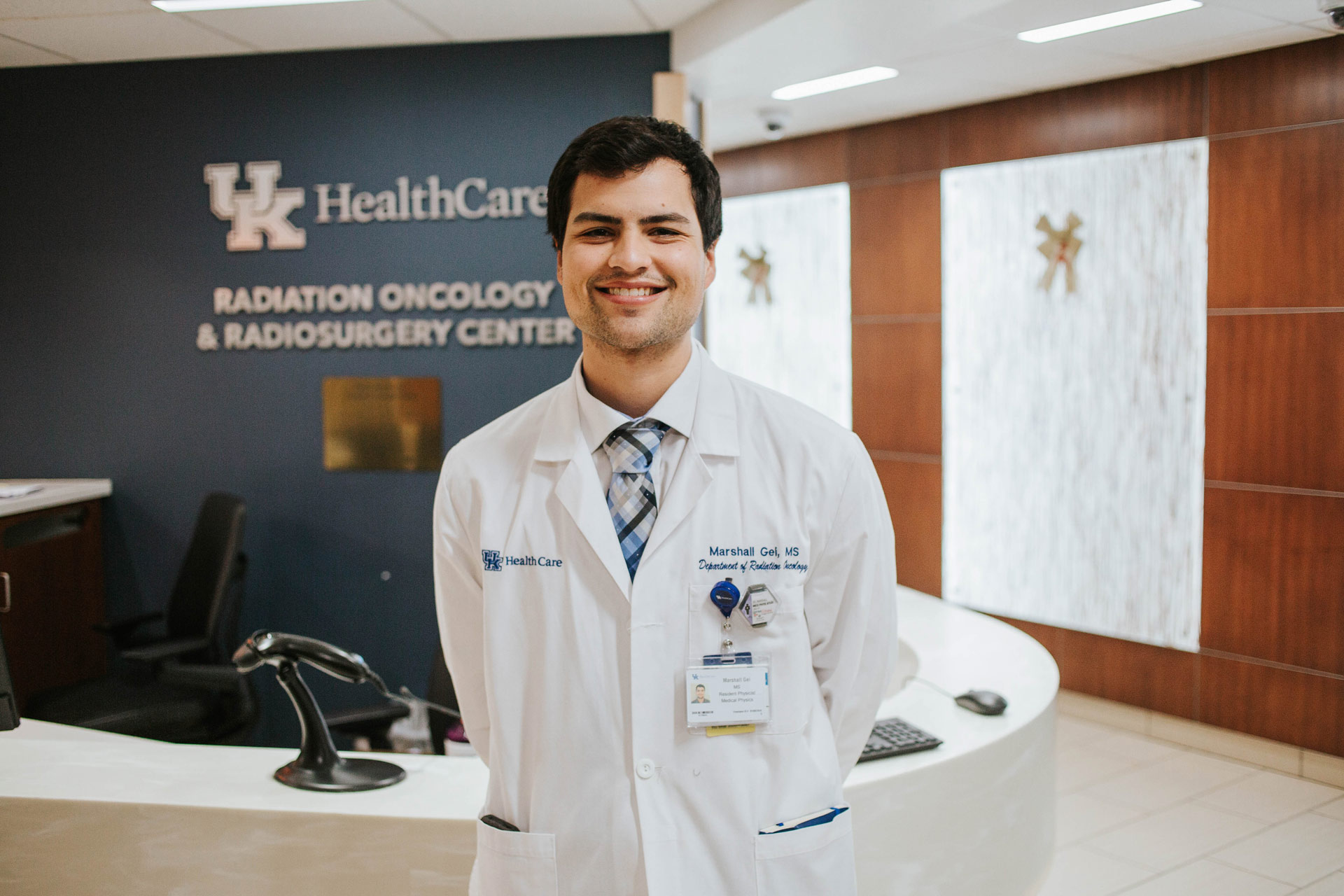 “I've appreciated this field so far, especially its positive impact, and just how involved I've been able to be.”

“This department is clinically focused and patient focused, but it’s also very education focused on teaching and bringing up the new leaders in the fields,” said Dr. Dennis Cheek, the Director of Medical Physics and part of the team that Marshall works closely with as a resident.

“I’ve loved it so far,” said Marshall. “Right now, I’m in my treatment planning rotation, which isn’t necessarily what a physicist does as much in their career, but may be called upon to do. I’m learning from the people in dosimetry—they make me more aware of things to look out for, like how a patient is set up on our machine, making sure the patient care is better. It’s allowing me to get more accustomed to every part of the clinic.” 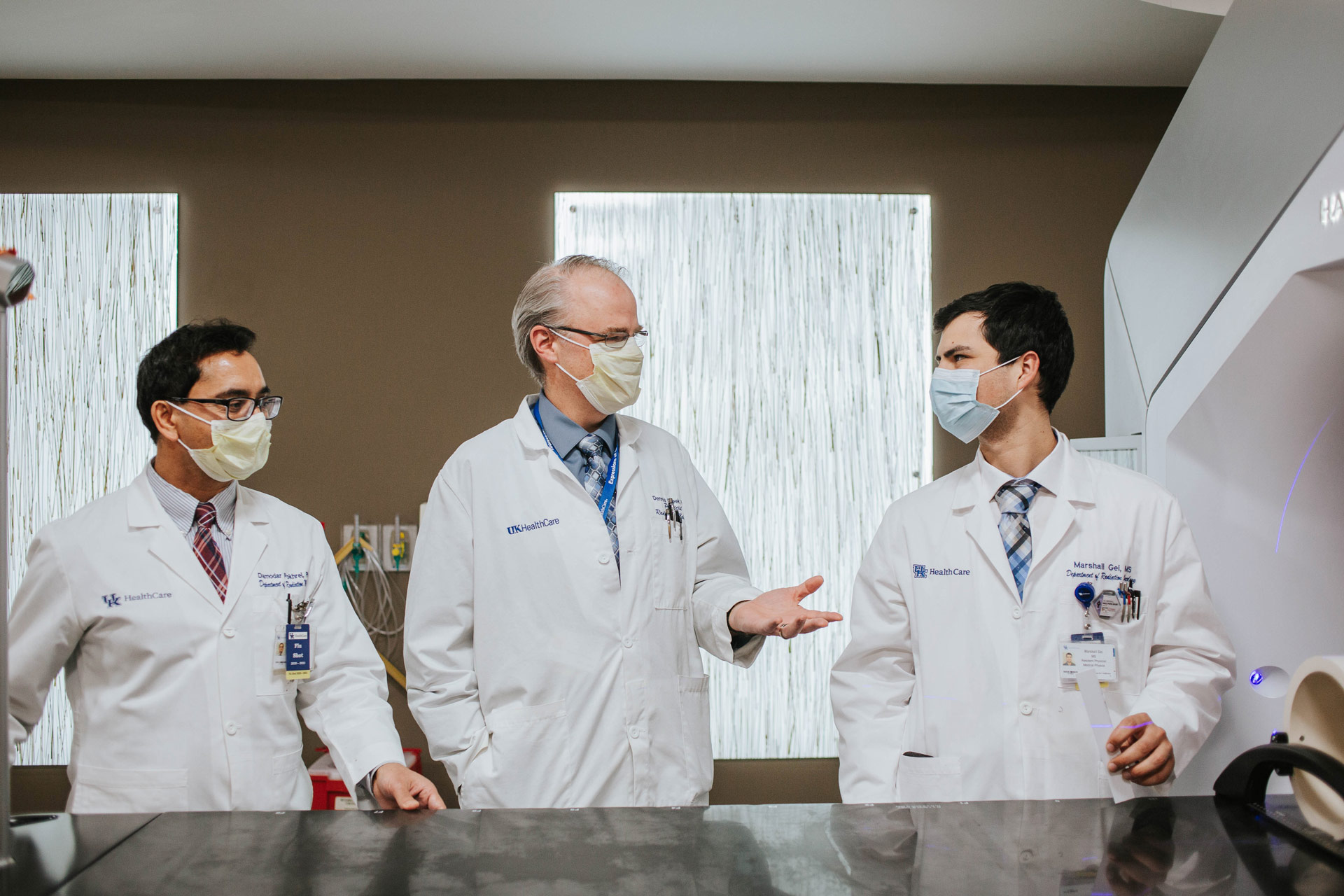 The collaborative atmosphere of the Radiation Oncology department helps the team thrive.

At Markey Cancer Center, medical physicists work behind the scenes with physicians to prepare the best treatment plan possible for their patients—especially when it comes to the use of radiation machines and other technology that aids in cancer treatment. The discipline of radiation oncology, which involves the treatment of cancer through internally- and externally-applied ionizing radiation, is a highly technical specialty. Medical physicists don’t meet with patients face to face often, but their skills help doctors ensure that a patient’s treatment is provided accurately. 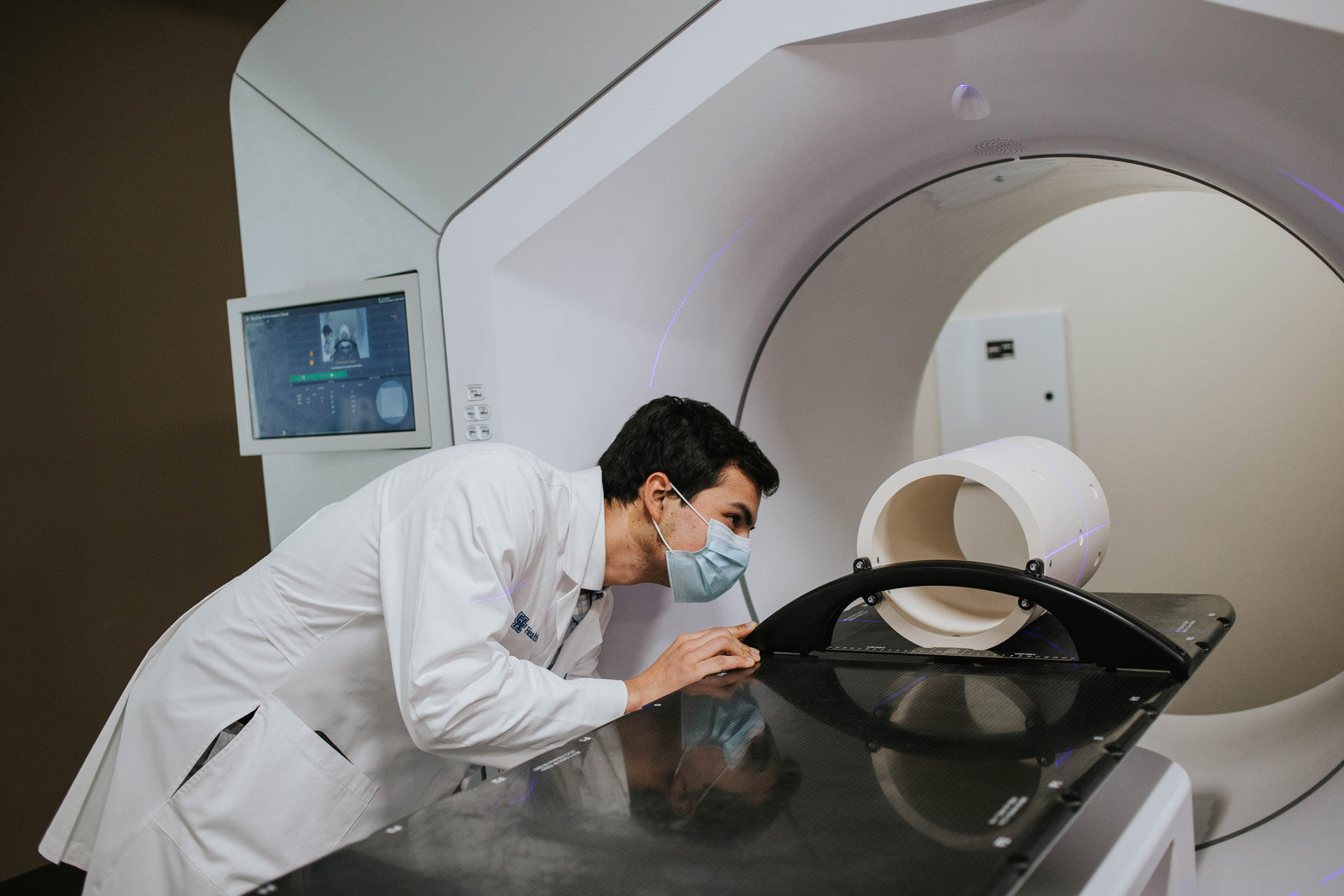 “You have to prevent errors, constantly checking to mitigate against different risks. You get used to it but you also enjoy it.”

“It’s a tremendous responsibility to make sure that we generate optimal treatment plans for our patients and our treatment machines deliver radiation dose as exactly as prescribed by the treating physicians,” said Dr. Damodar Pokhrel, Director of Clinical Medical Physics and the Associate Director of the medical physics residency program. 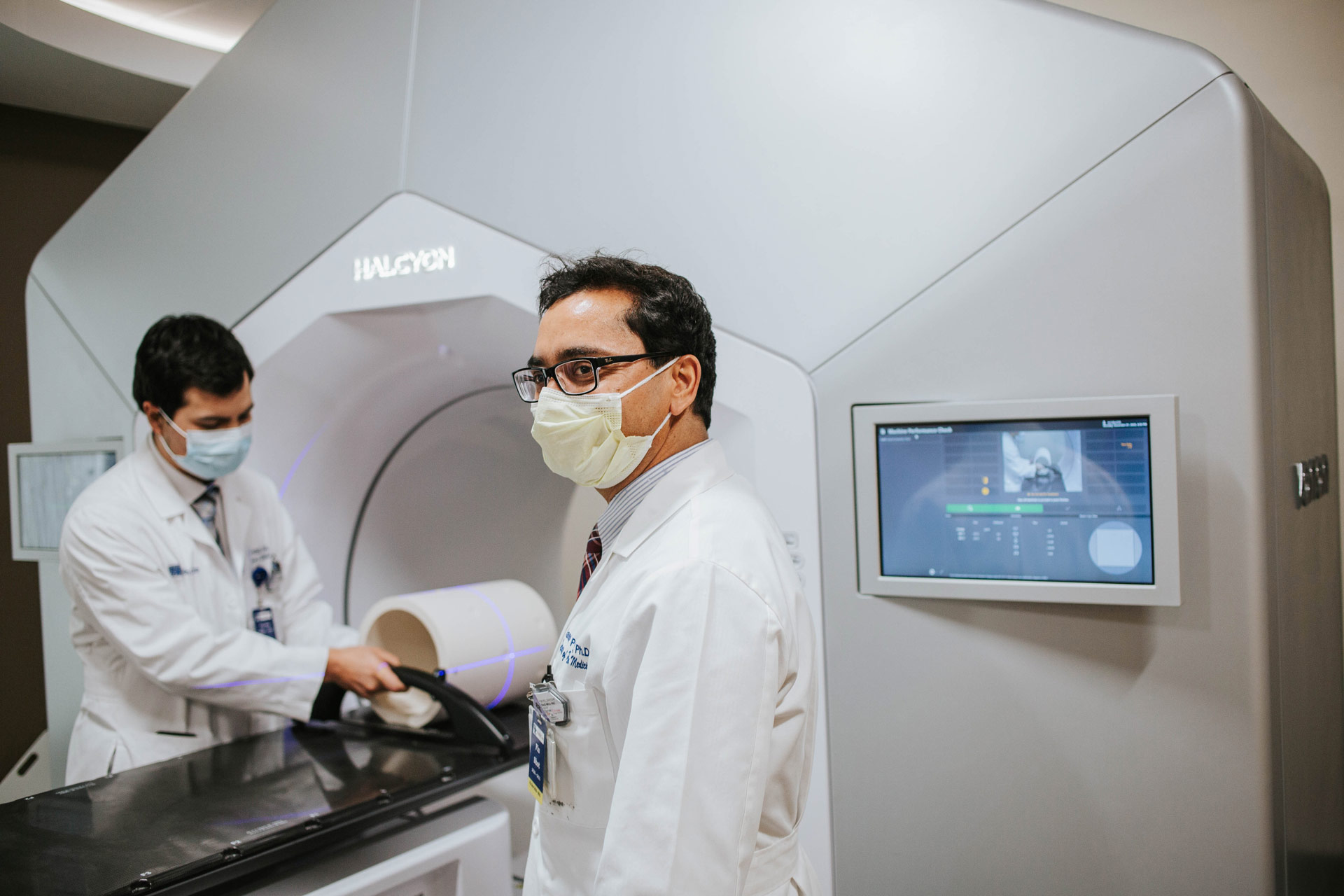 “The ultimate goal is to provide the highest quality of fast, safe and effective radiation treatments to our cancer patients,” said Dr. Pohkrel. 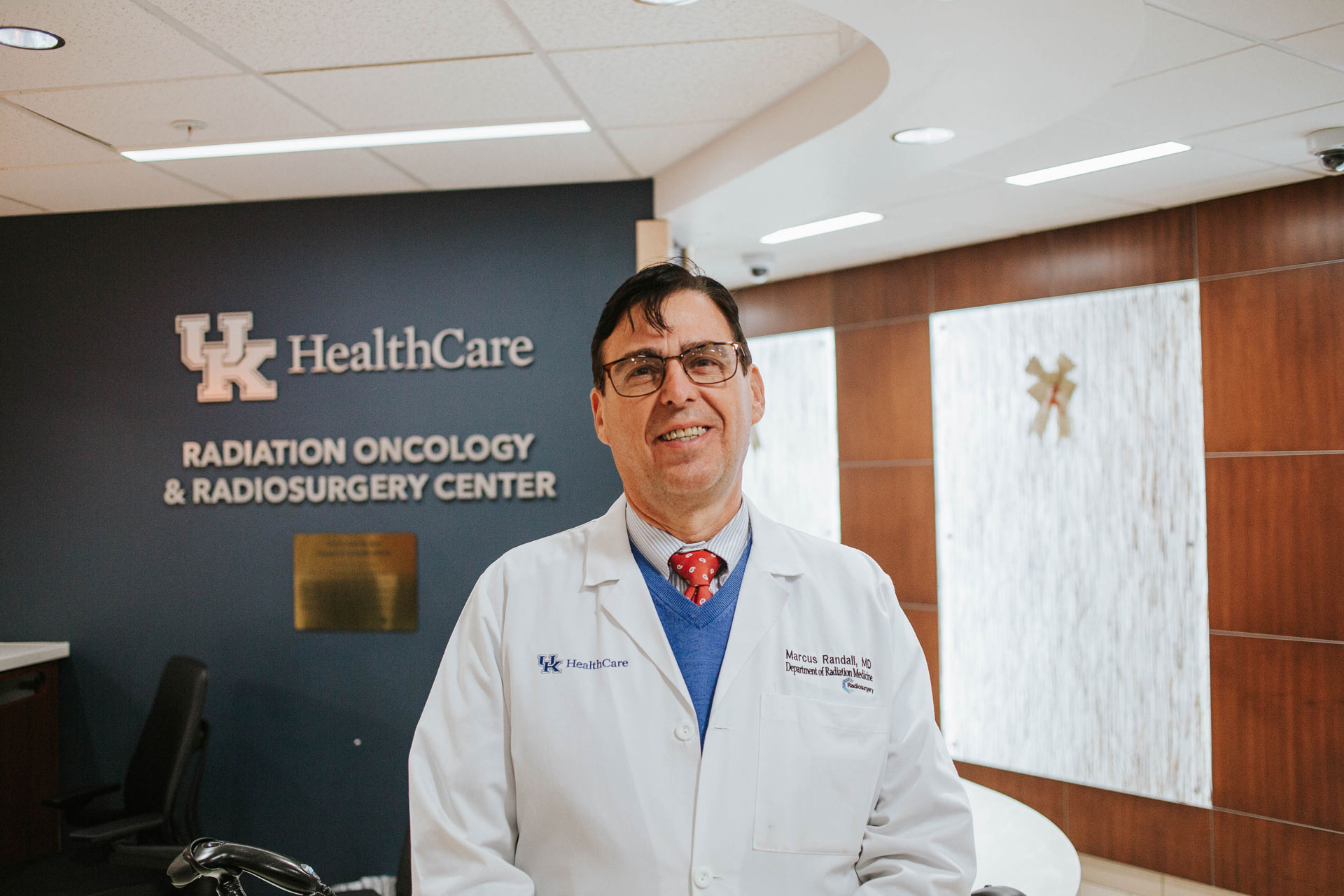 That level of collaboration is something Marshall loved during his baseball career—and it’s something he’s witnessed in his new role. “I’ve appreciated my time at Markey Cancer Center. We definitely have a good team dynamic and are able to communicate effectively. We recognize that we’re doing it for a higher purpose, and baseball helped me recognize that as well. It’s not just about personal accolades, but what you can do as a team. It can be hard to find that team aspect when you get out of sports. I’ve been fortunate that doing my residency, and working at Markey Cancer Center, has given me that.” 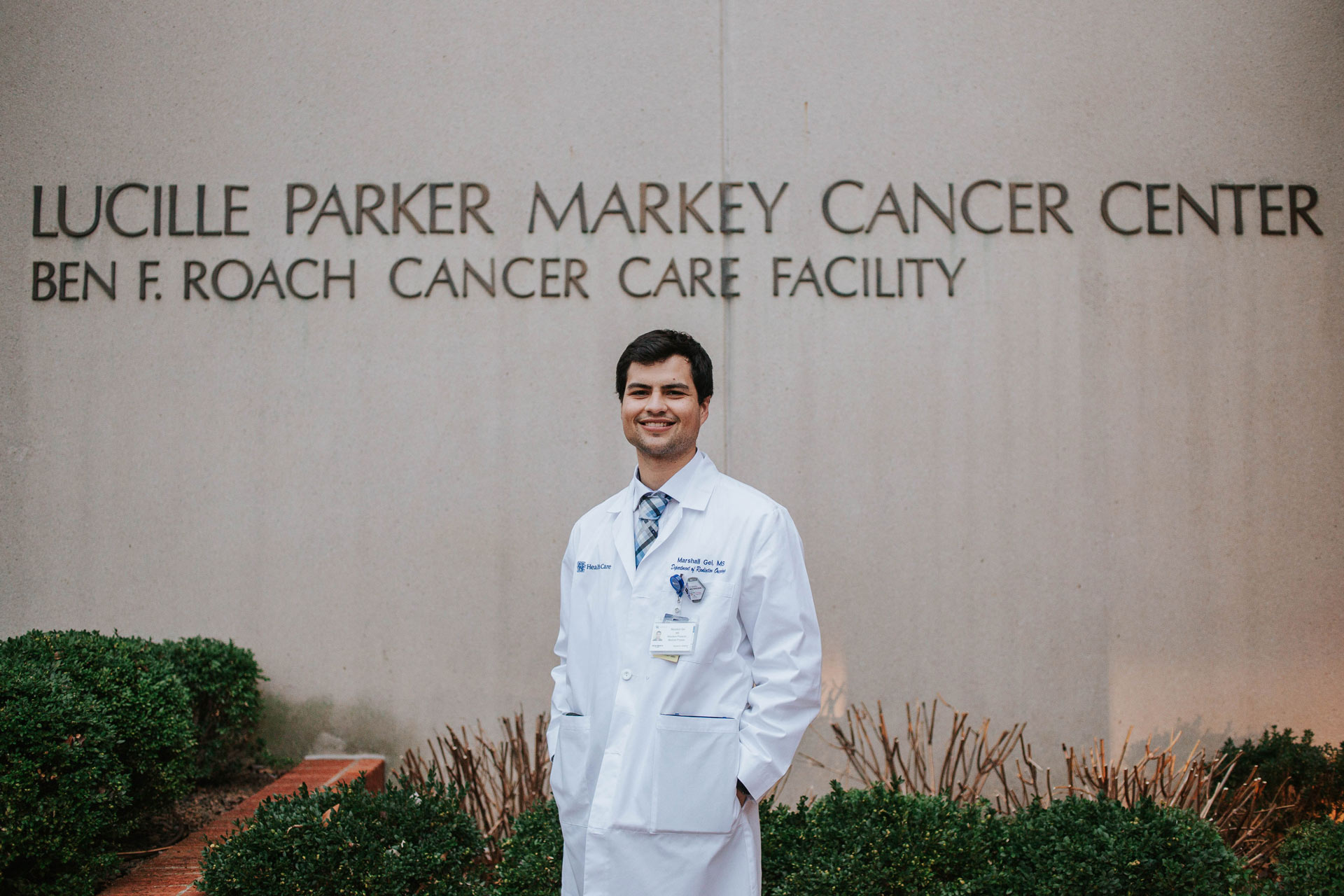 “For baseball, it’s about winning a championship. For medical physics, it's about treating patients with a high standard of care.”

“Nothing but perseverance.”Big Blue Nation, Orthopaedics