When he was a little boy, Donald Young was told that his sight wasn’t ever going to get better. 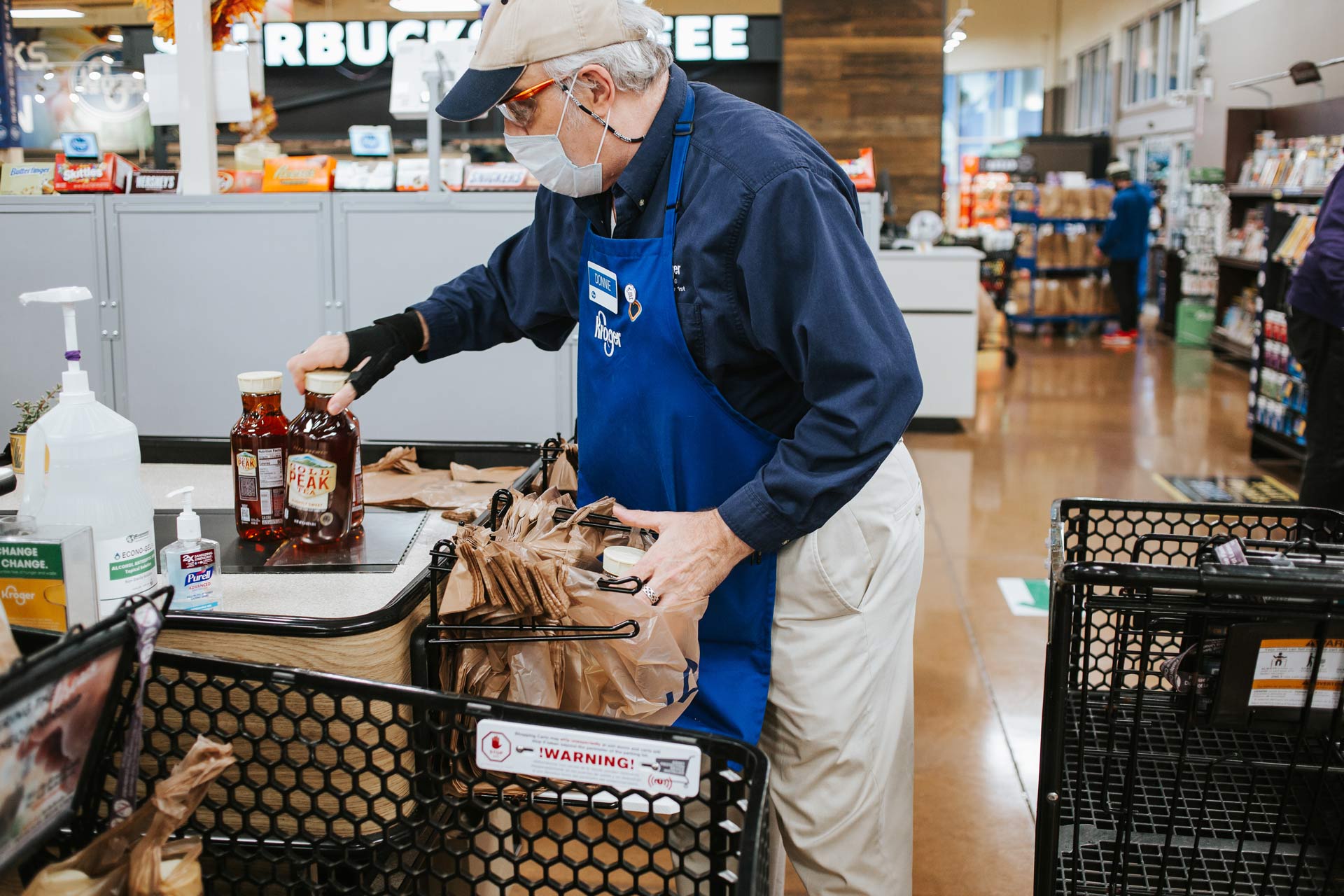 “I could see well enough to stock groceries and eventually become a bagger. But my eyesight was getting worse and worse.”

“I’ve been legally blind all my life. My eyesight’s been 20 over 400 most of my life, with occasional variations where it briefly got worse. I had two detached retinas as a baby, right and left eye. The right eye, they couldn’t save. They had to remove it when I was around 18 months old. I’ve had an artificial eye in my right eye my entire life.” 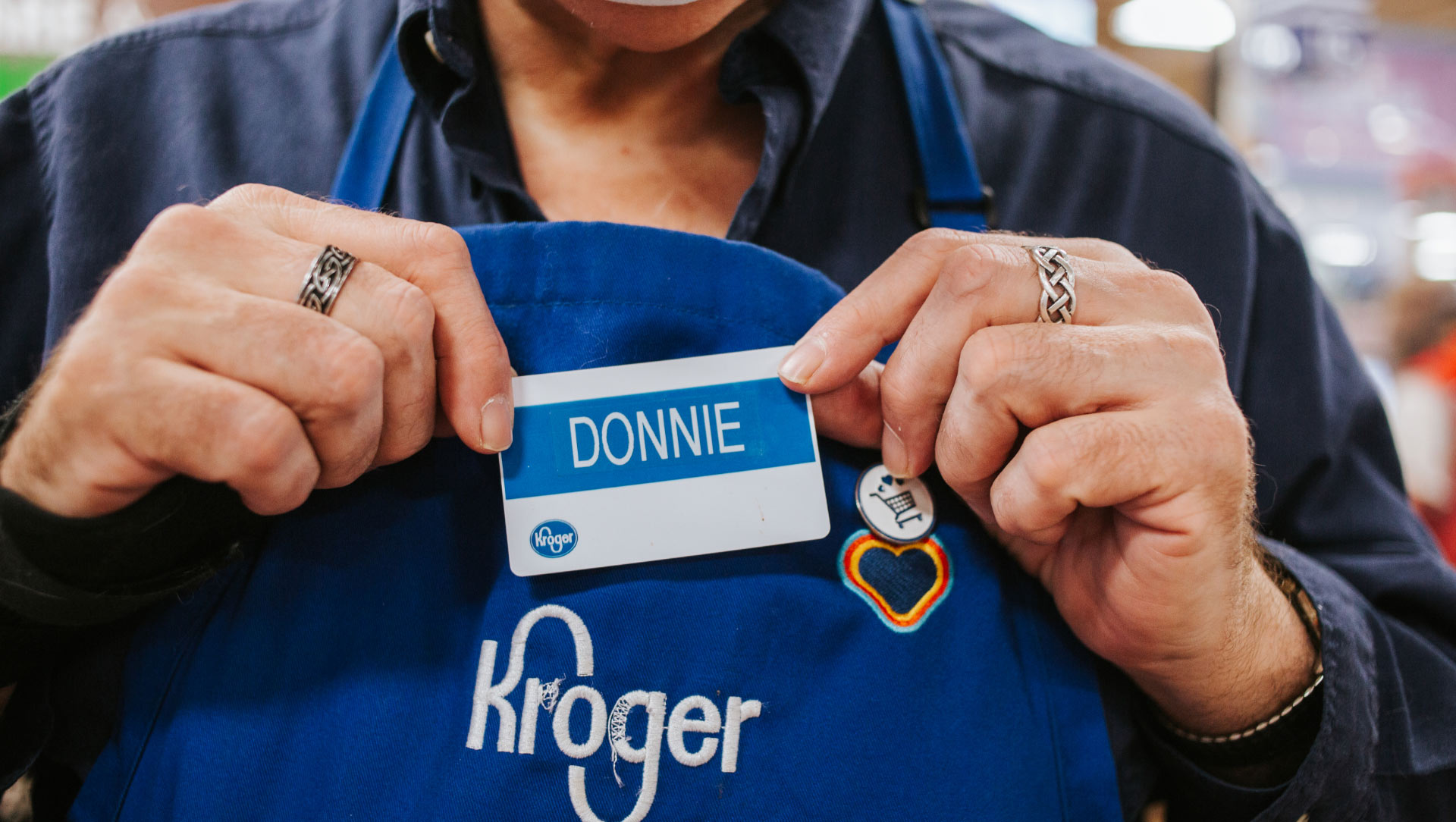 Donald brings joy to everyone he meets, and is a recognizable personality at his Kroger.

Donald describes himself as “functionally legally blind.” He can’t drive and “didn’t dare trust” himself on a bike, but he can see well enough to do his work at a grocery store, where he’s worked as a stocker and bagger for more than 20 years. Over the years, he had various interventions for his remaining vision, including special corrective glasses and a cataract surgery to replace the lens in his left eye more than a decade ago. But Donald’s vision was getting worse. 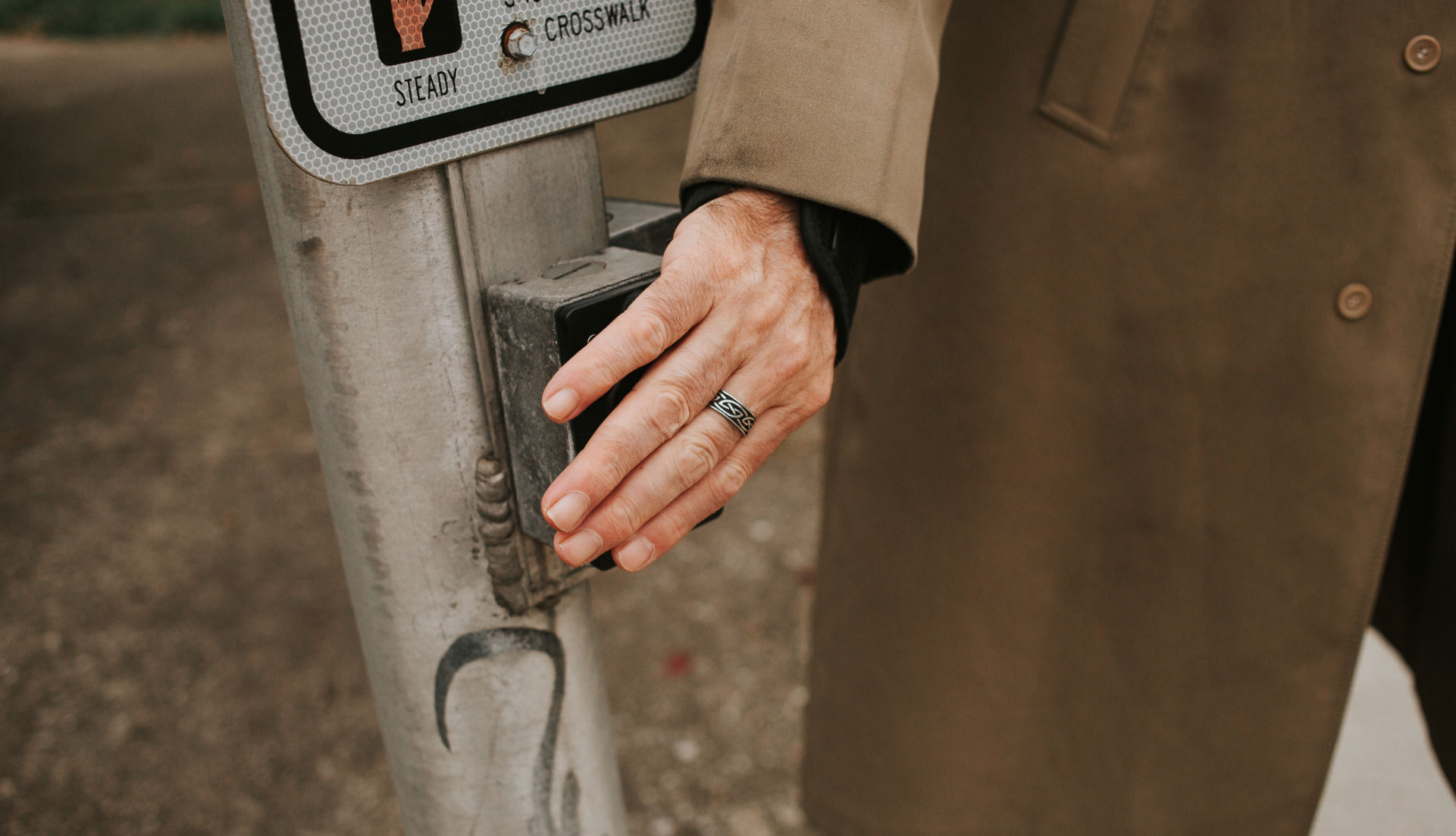 As Donald’s eyesight deteriorated, something as simple as crossing the street became increasingly risky to navigate.

“Over the past few years, my vision would fog up early in the daytime—just like looking through a cloudy shower door—and it wasn’t clearing up. It would clear up after a night’s sleep, but it would come in some time in the middle of the morning like a storm inside your eye.” 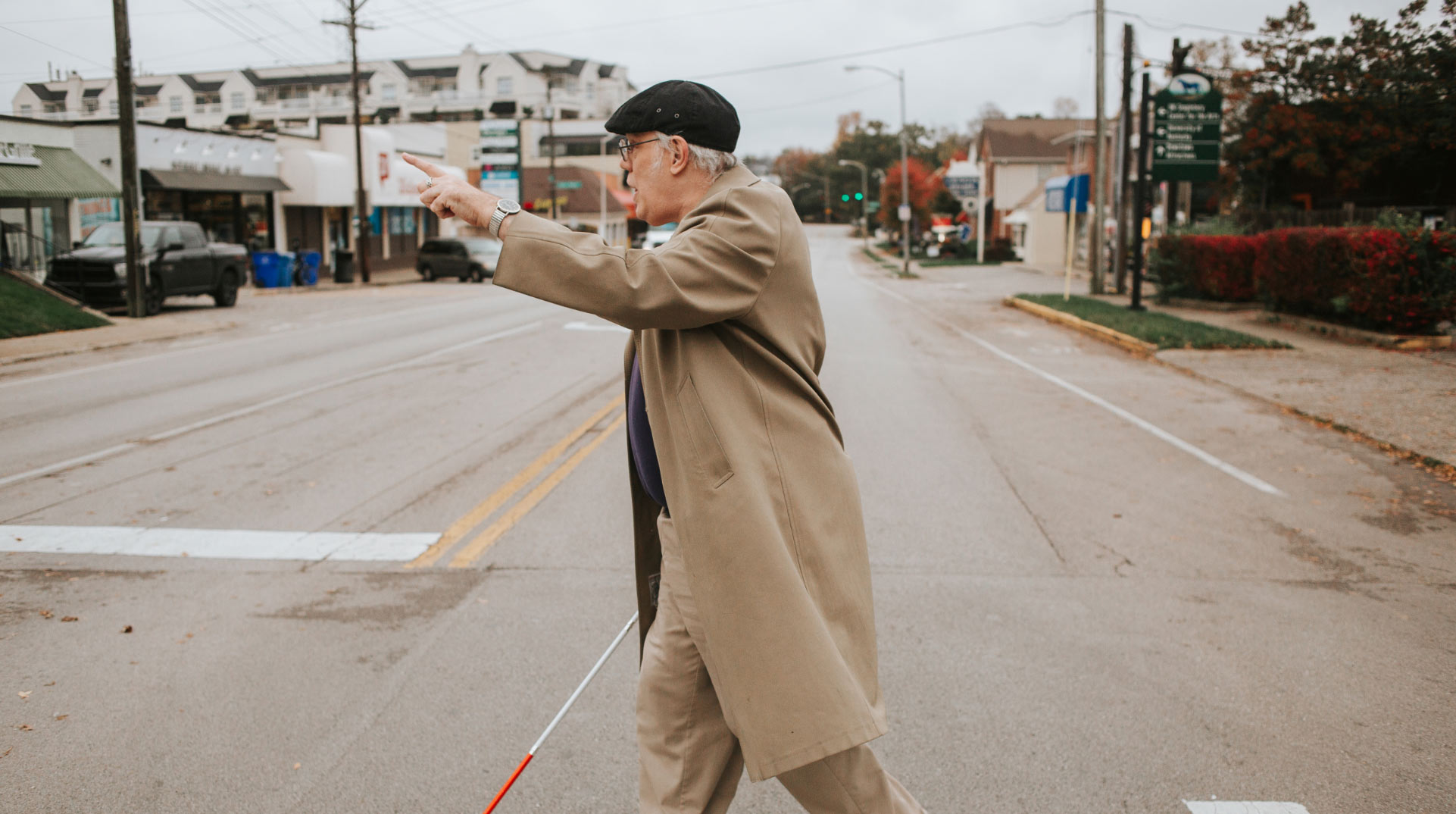 Donald walks to and from work every day, crossing streets and busy intersections.

Donald was having to call into work more and more—and he was concerned that soon he wouldn’t be able to work at all. Navigating street crossings on his walk home was becoming increasingly risky, and he had a difficult time dealing with the four flights of stairs to his apartment. He visited doctor after doctor in search of a solution, but most were hesitant to take on his case. The fact that he’d already lost one eye made it feel like too much of a risk. But after visiting seven other doctors, Donald found one who understood the issues with his eye, and had the confidence that she could fix them: Dr. Claire Fraser, an ophthalmologist at UK HealthCare’s Advanced Eye Care. 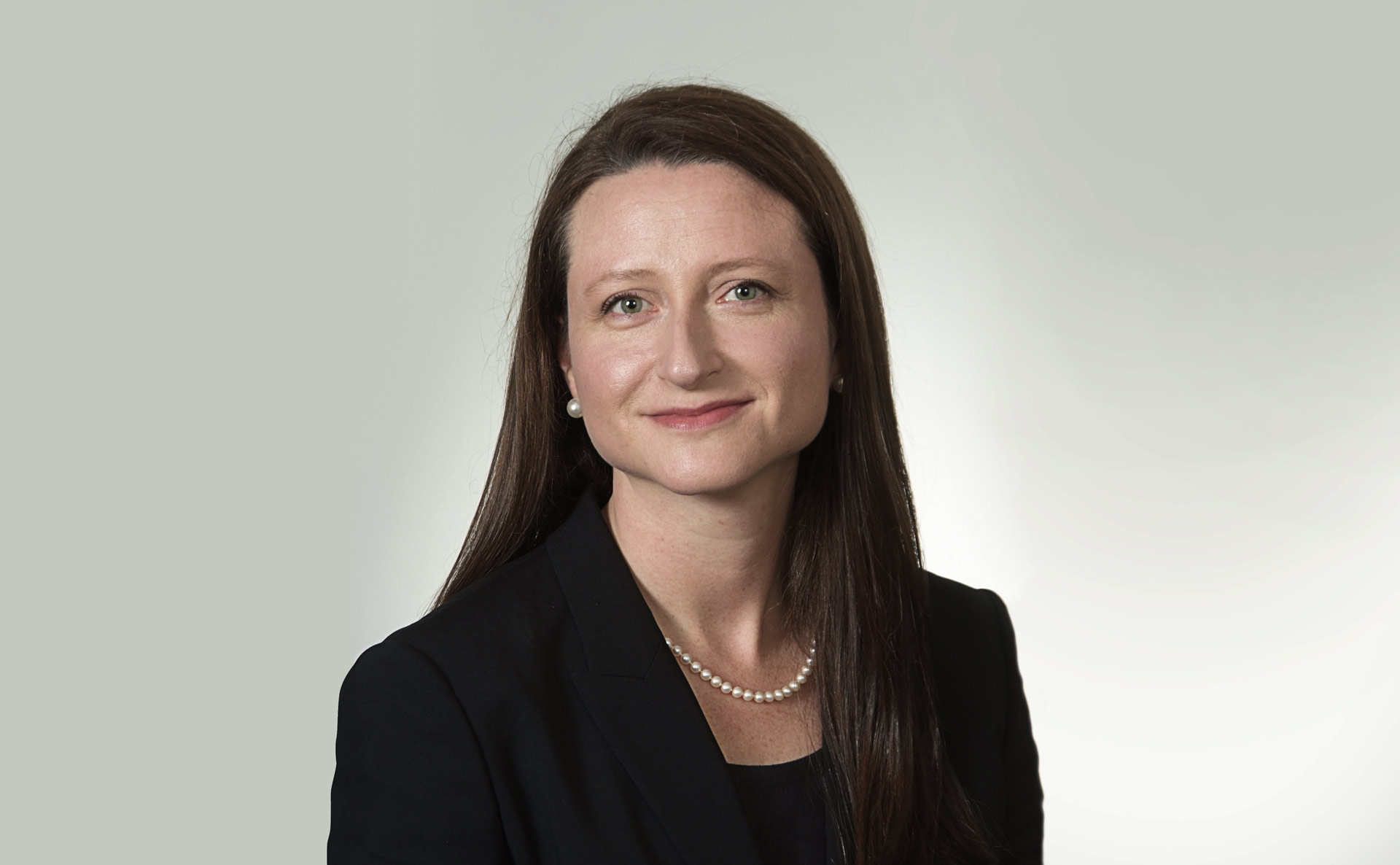 “Not for one minute did I think it wasn’t going to work. Dr. Fraser is that good.”

“Enough was enough,” Donald said. “If I wanted to see again, I had to roll the dice. I was willing to accept living in complete darkness, if that was going to happen, or be better. I was sitting here day after day after day, not being able to work, not being able to do anything. And Dr. Fraser says, ‘I can fix it.’ I didn’t feel a bit of hesitation in her voice. ‘I can fix it.’ That helped a lot. The stakes were so high: blindness, or success. And with no right eye to compensate. We’re talking darkness for the rest of my life. And not for one minute did I think it wasn’t going to work. Dr. Fraser is that good.” 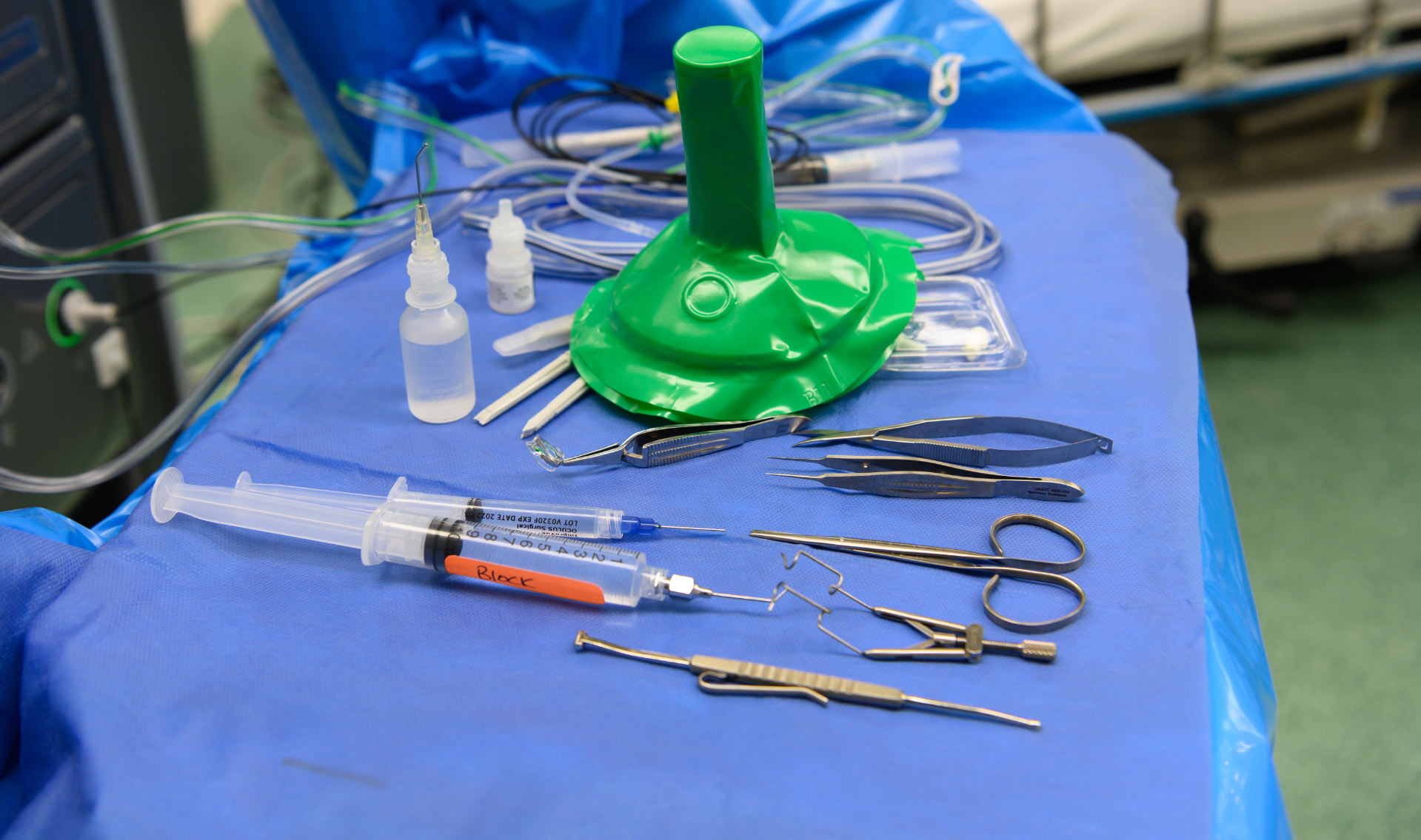 To improve his visual potential, Donald would have to go through surgery—while conscious.

Dr. Fraser helped Donald understand what was happening to his vision: he was suffering from intermittent bleeds that led to debris in the clear fluid inside his eye, which settled at night and then clouded his sight during the day. The bleeding was caused by a misaligned lens, which had occurred years earlier after his first lens replacement surgery. And he had scar tissue in the back of his eye, which had been there for most of his life. All three issues could be corrected during a single surgery, performed by herself and Dr. Michelle Abou-Jaoude, a fellow in vitreoretinal surgery at UK HealthCare’s Advanced Eye Care. Donald agreed to the surgery—willingly accepting the risk of losing his sight completely for the chance to see again. 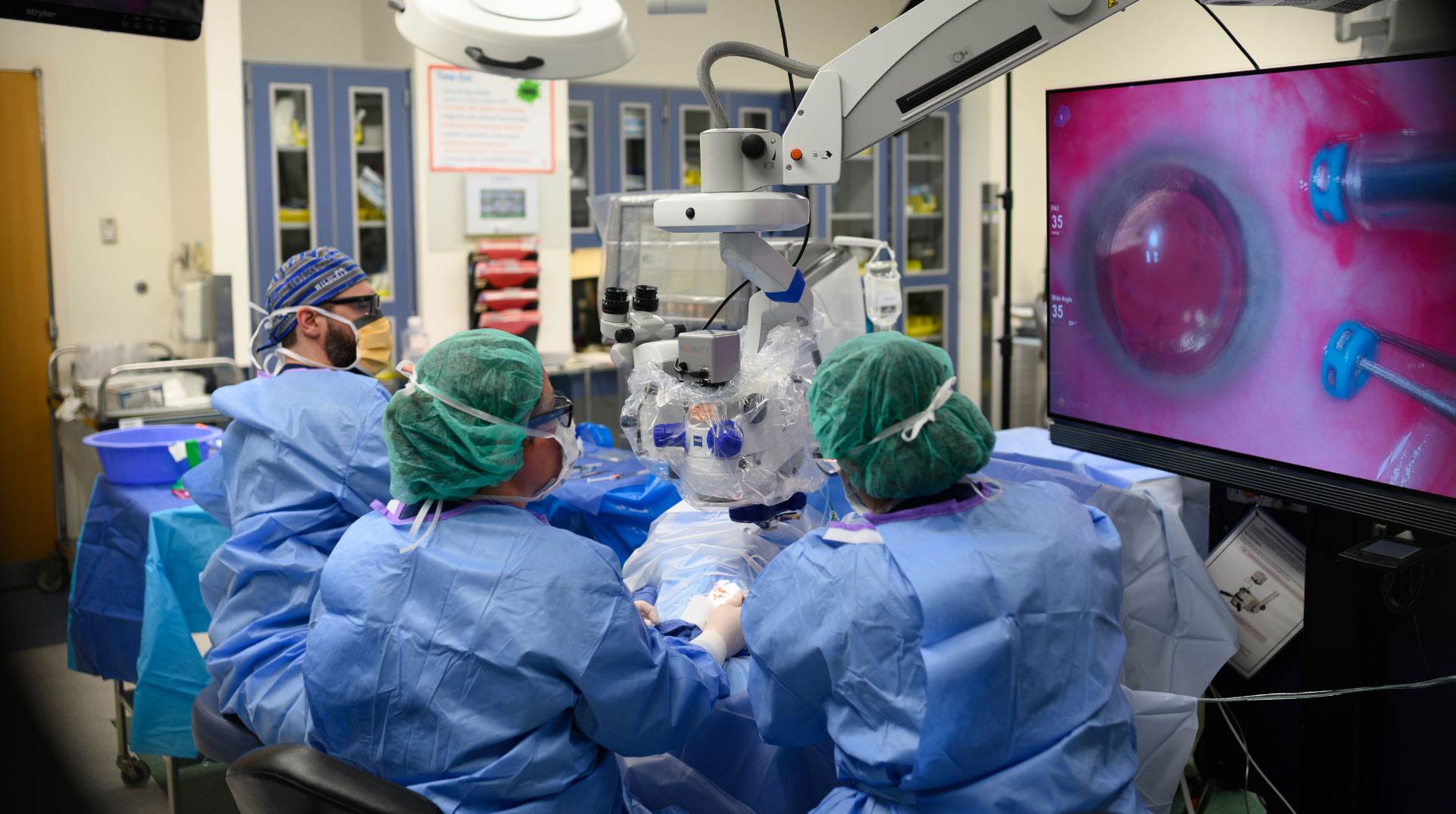 “I'm just grateful that they were able to spend three hours of their time to heal me.”

“This surgery would have been unthinkable even two to three years ago. And I was able to stay conscious enough to observe a lot of it. I could feel them working on me—I could actually watch. It was like laying on the bottom of a pond, looking up at the surface. It was fascinating. This is the first time Dr. Fraser ever had to tackle these three things at once, and she did it with speed and efficiency. And the calmness, the way she was talking to Dr. Abou-Jaoude during the surgery—it was like one person with four hands. They worked as one.” 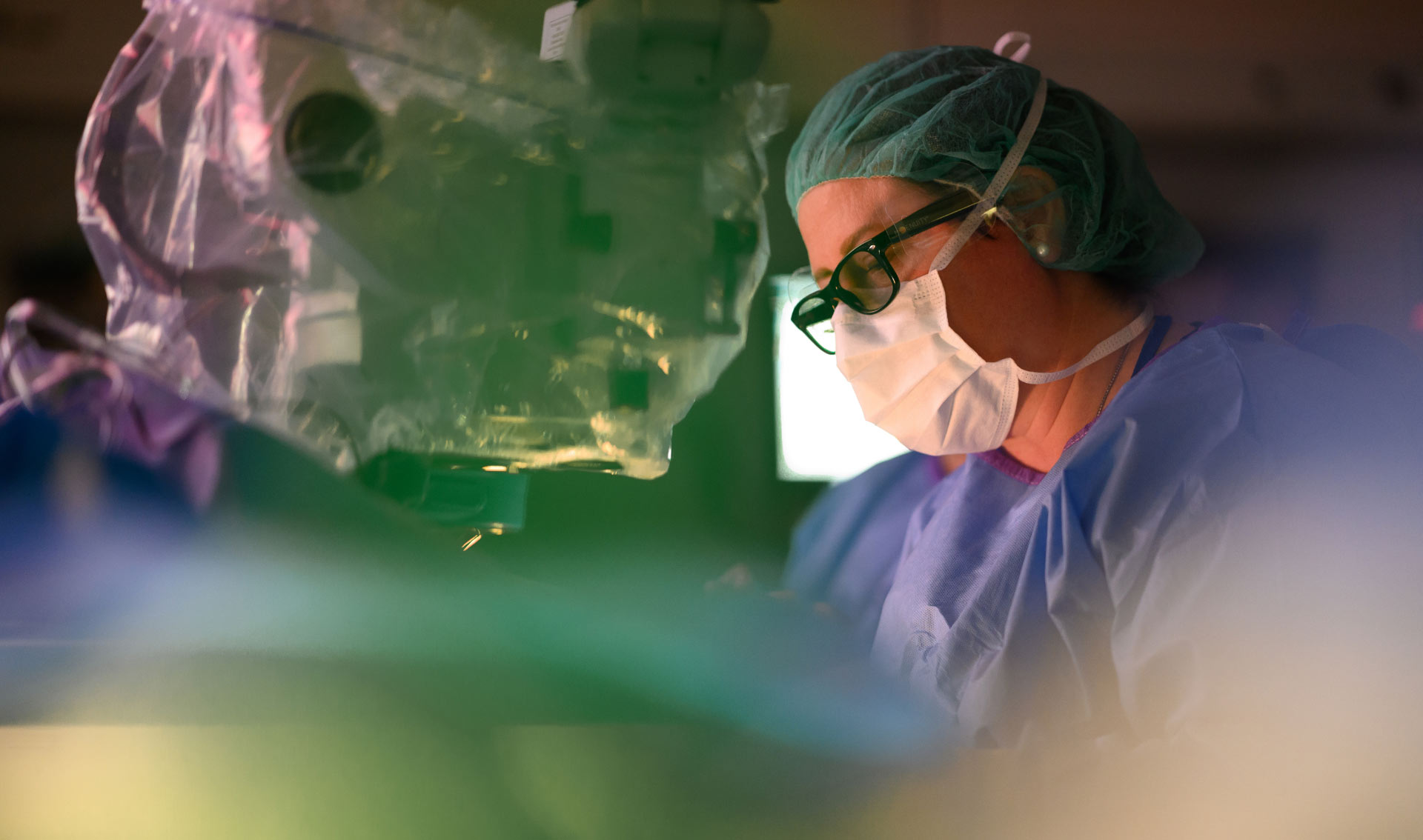 “It's been one of my best results,” said Dr. Fraser, “because there was a lot to be gained for him in daily life.”

Donald’s faith in Dr. Fraser and Dr. Abou-Jaoude paid off. The surgery, which involved replacing the lens in Donald’s left eye, cleaning the fluid inside his eye, and removing the decades-old scar tissue, relied on advanced technology: a combination of intraoperative OCT—a high resolution 3D camera, integrated with a microscope—and a large 3D display that allowed Dr. Fraser and Dr. Abou-Jaoude to clearly see what was happening inside Donald’s eye during the procedure. The surgery was successful on all counts, restoring Donald’s vision to levels he’d never experienced in his life. 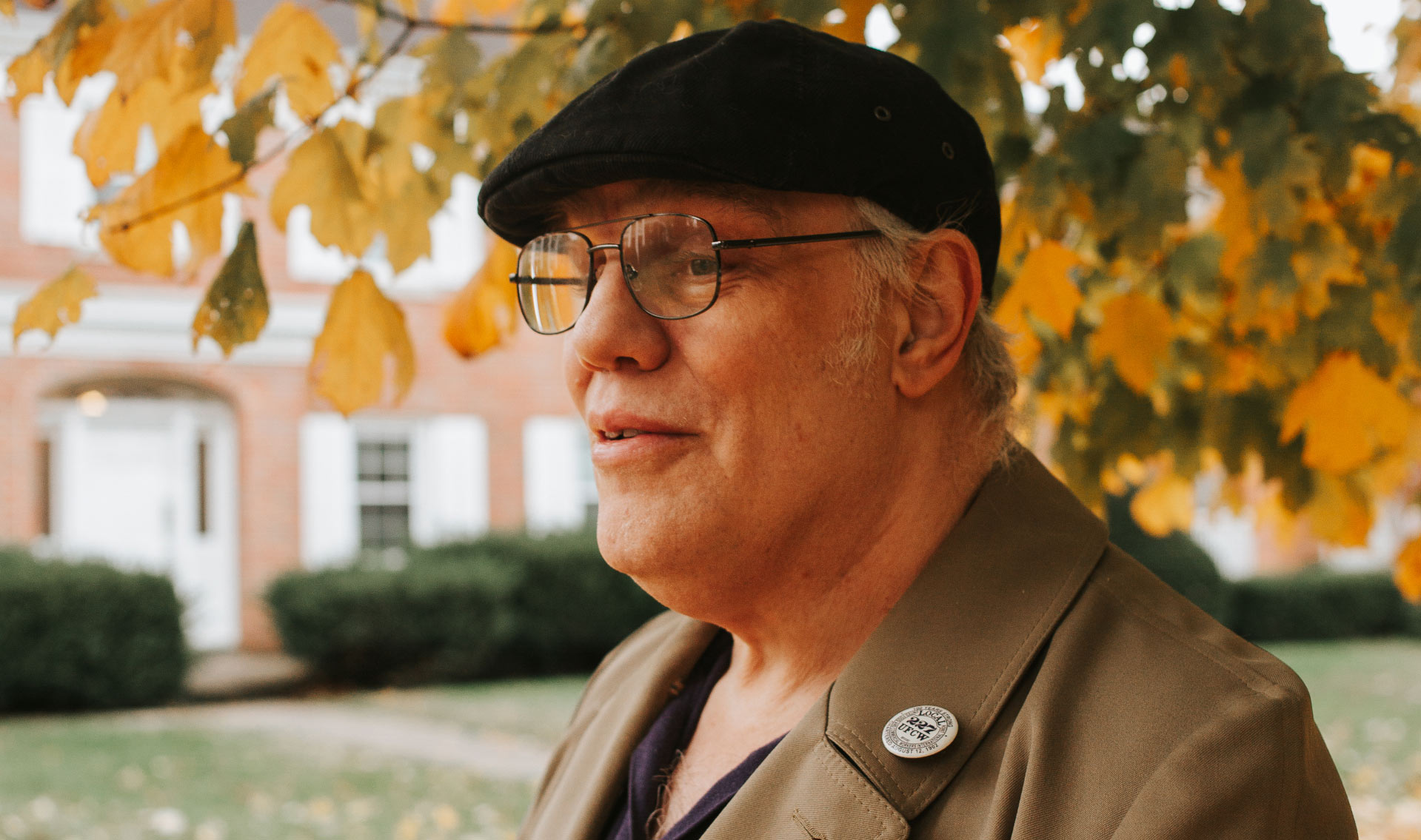 “I can actually see the leaves turning colors. I couldn't see that before.”

“The surgery ended up going very, very well,” said Dr. Fraser. “He now has better vision than he has had in years. He’s seeing about 20 over 125, which to you or me would be very blurry, but that’s a significant gain in function for him. And he doesn’t have that recurrent hemorrhage inside the eye either. It’s been one of my most gratifying results, because there was a lot to be gained for him in daily life.”

Thanks to the surgery, Donald is able to continue the job he loves, and do other things he hasn’t been able to do in years—like reading his favorite science-fiction novels, enjoying the fall foliage on his neighborhood walks, and continuing to live independently. 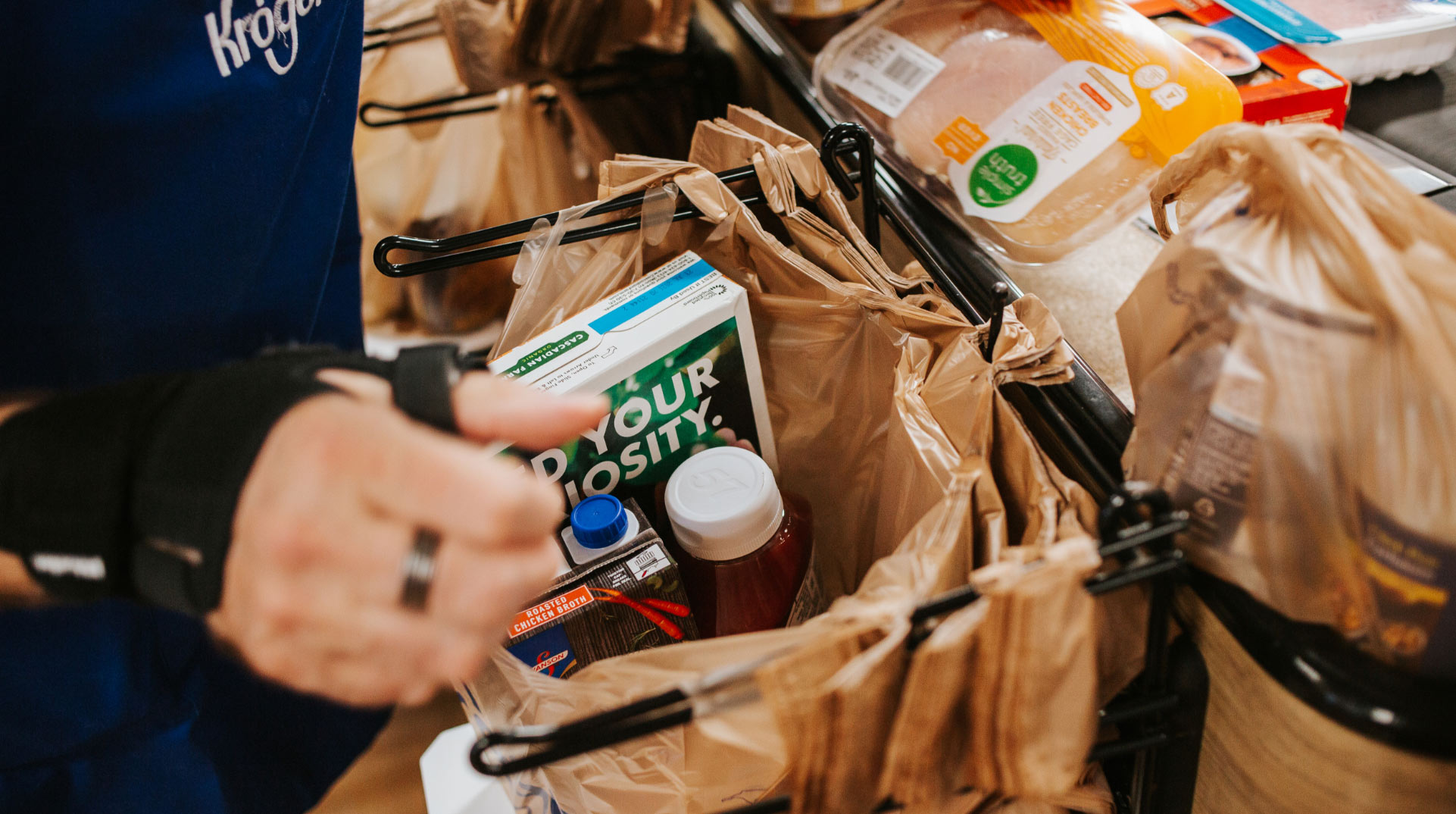 “I'm doing the best that I can at work, and I’ve got some wonderful people around me.”

“I’m a better person for it. I’m a more productive person for it. And I’m a much more humble and grateful person, because it could have gone the wrong way with someone who didn’t have the skill that Dr. Fraser had, or the confidence. She and Dr. Abou-Jaoude went—not just the extra mile, but the extra several miles. If I were to see them tomorrow, I’d thank them both again, and it would be heartfelt, because I was a bit down the road to darkness. But everything worked out. There is a happy ending to this story.” 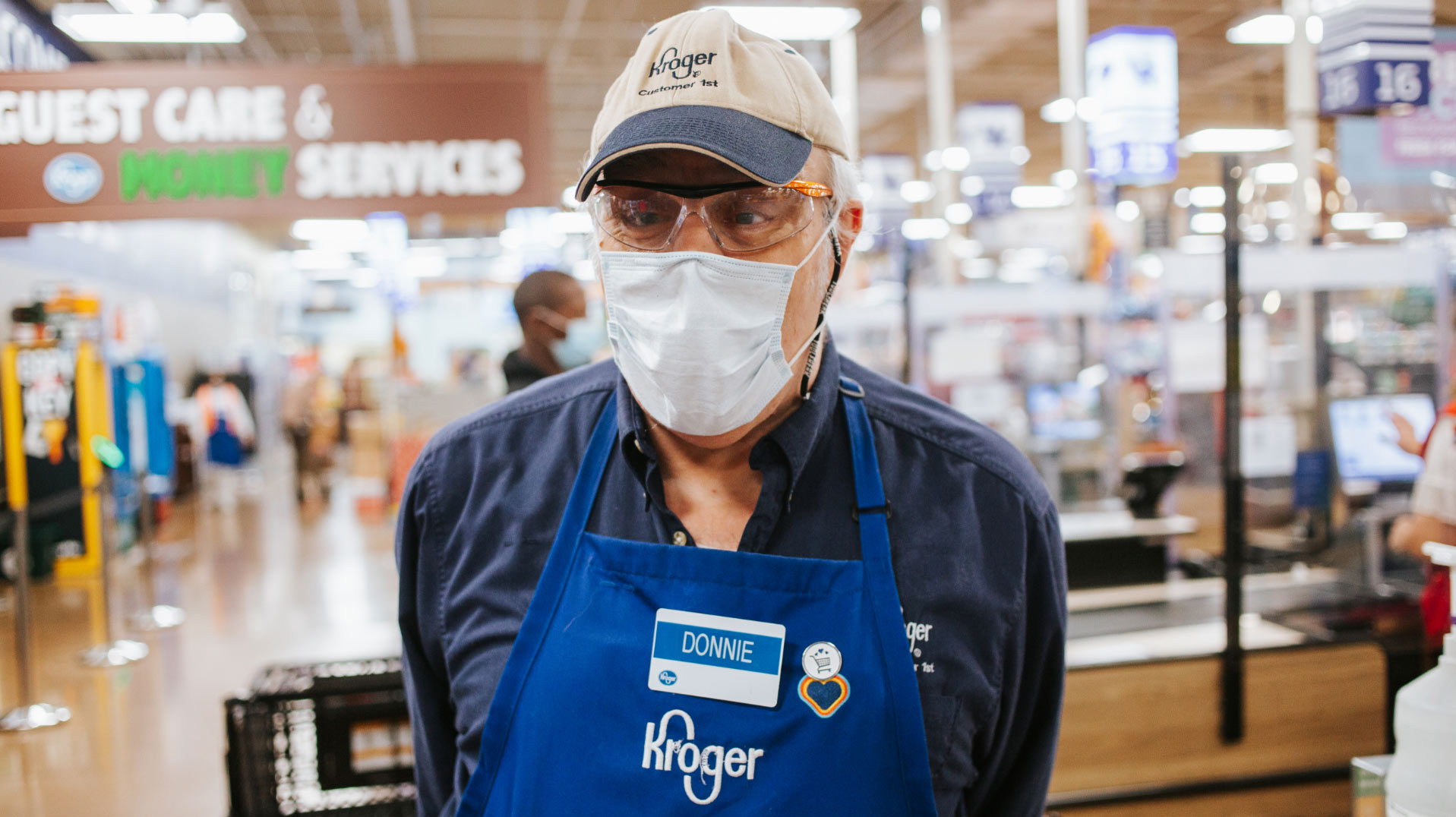