A little over a decade ago, the Epilepsy Program at UK HealthCare’s Kentucky Neuroscience Institute reached a defining moment. Dr. Meriem Bensalem-Owen had recently taken over the program after her senior colleague left to join a private practice, leaving Dr. Bensalem-Owen to run the program solo. 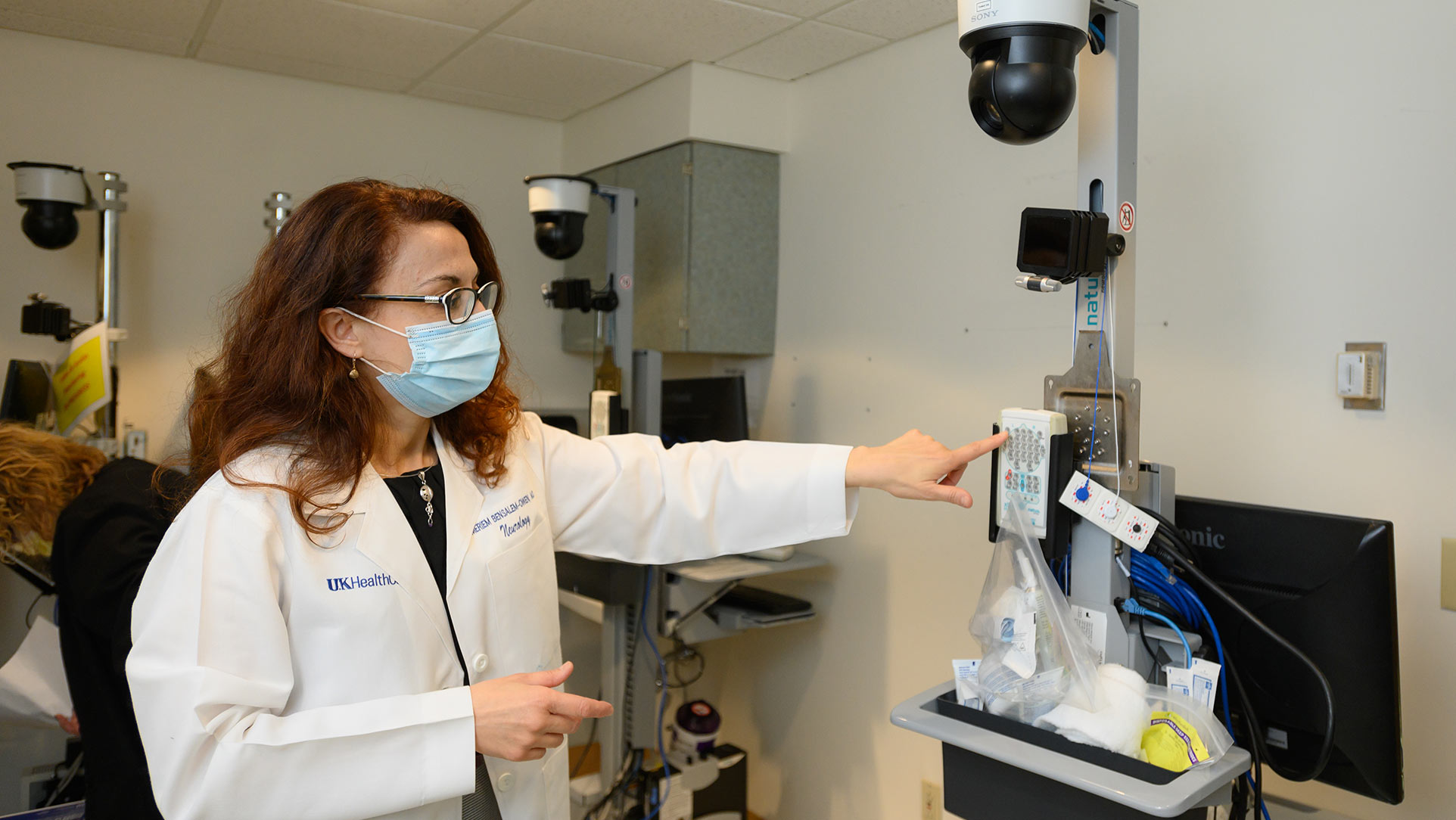 “I always wanted to help, in one way or another.”

“For me, there was a sense of duty to our patients and the program: ‘Well, we need to keep this afloat,’” she recalls. The program was designated a Level 4 epilepsy center by the National Association of Epilepsy Centers (NAEC)—the highest level a program can be. Dr. Bensalem-Owen was determined to keep it that way. So for six months straight, she was on daily call as the hospital’s only epileptologist caring for adult patients, balancing the stresses of nonstop, lifesaving care for patients with taking care of her son as a single mother. 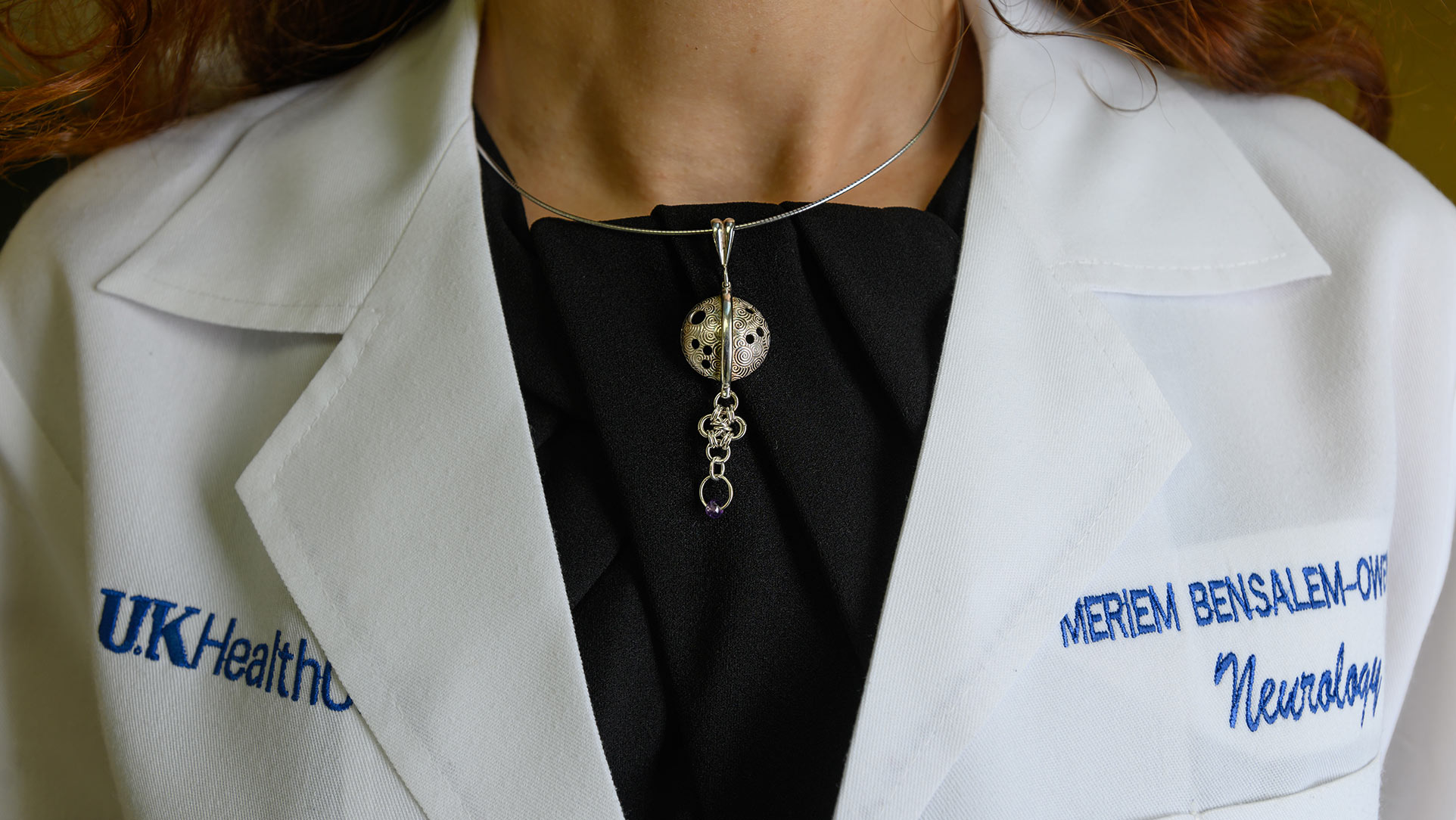 Dr. Bensalem-Owen wears a necklace created by one of her patients, which represents the two hemispheres of the brain with symbolic holes.

Fast forward ten years. Dr. Bensalem-Owen’s Epilepsy Program continues to be a Level 4 NAEC accredited center—one that has grown exponentially, in terms of staff, capabilities, and innovations in the field. Over the years, Dr. Bensalem-Owen has assembled a multidisciplinary team to provide patients with the highest level of care, with a variety of testing, complex diagnostic monitoring and technology not offered at lower-level centers. Those capabilities allow the team to better evaluate complex epilepsy patients who have seizures that are resistant to pharmaceutical interventions. 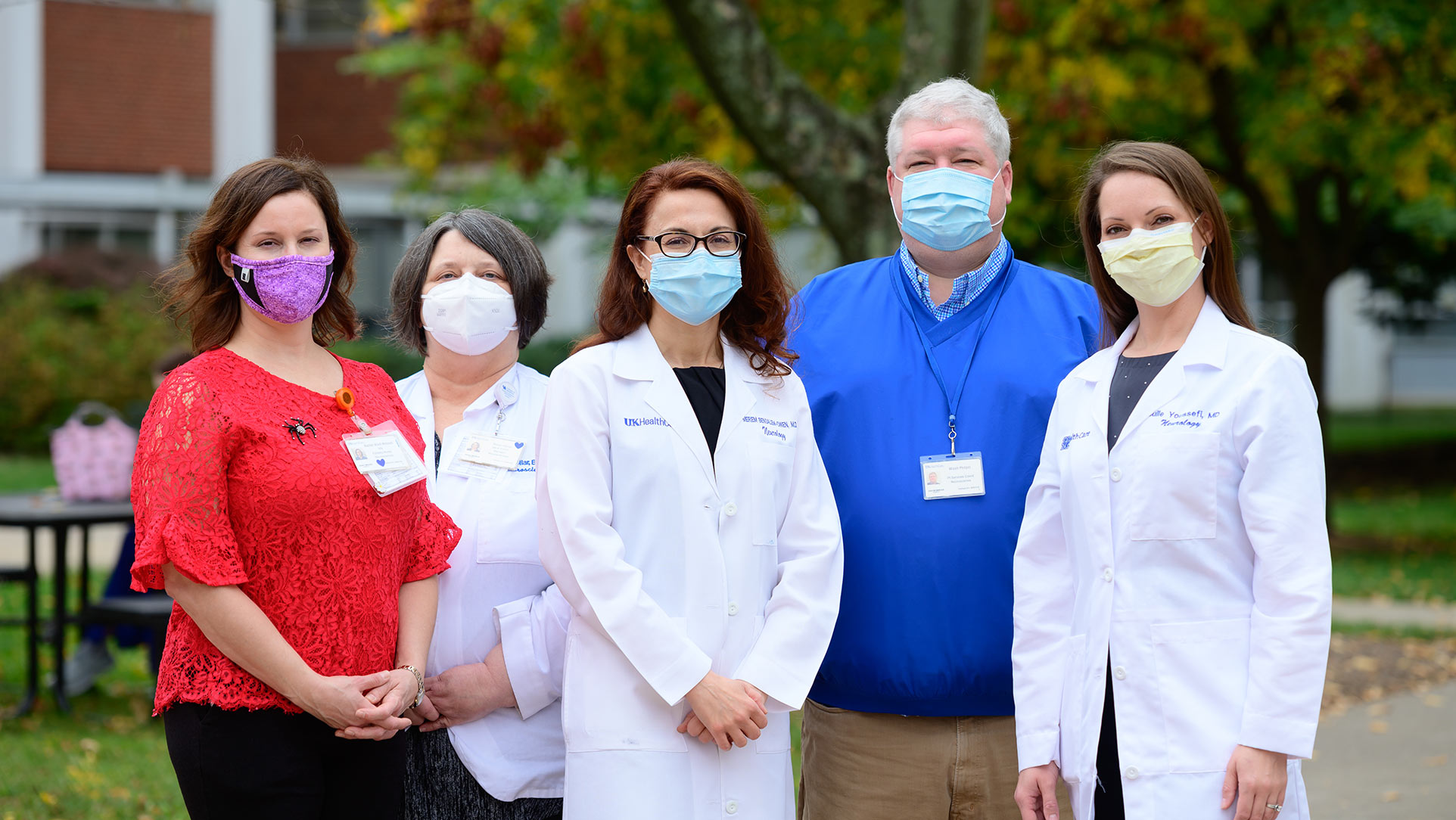 Dr. Bensalem-Owen has grown the Epilepsy Program into an interdisciplinary team.

The team has come a long way from the days when Dr. Bensalem-Owen was running the program on her own, and now includes eight epileptologists and clinical neuro-physiologists with special interest in the management of epilepsy. “Our team is very energetic and enthusiastic,” she says. “I just love the spirit—everybody’s very engaged. It’s not without challenges, but that’s what makes it interesting.”

Dr. Bensalem-Owen has known she wanted to go into medicine since she was a teenager. It’s been a calling that has required empathy, tenacity, and patience—skills she honed after wearing a back brace for 11 years to treat her childhood scoliosis. While she grew up with a mother who had a neurological condition called trigeminal neuralgia, as well as a maternal grandmother with Alzheimer’s, she didn’t turn her attention to neurology until medical school. “I really found the brain captivating,” she recalls. “It was just fascinating what a stimulated brain could do, but it’s very disheartening to see how that can affect patients or individuals with epilepsy, and their families.” 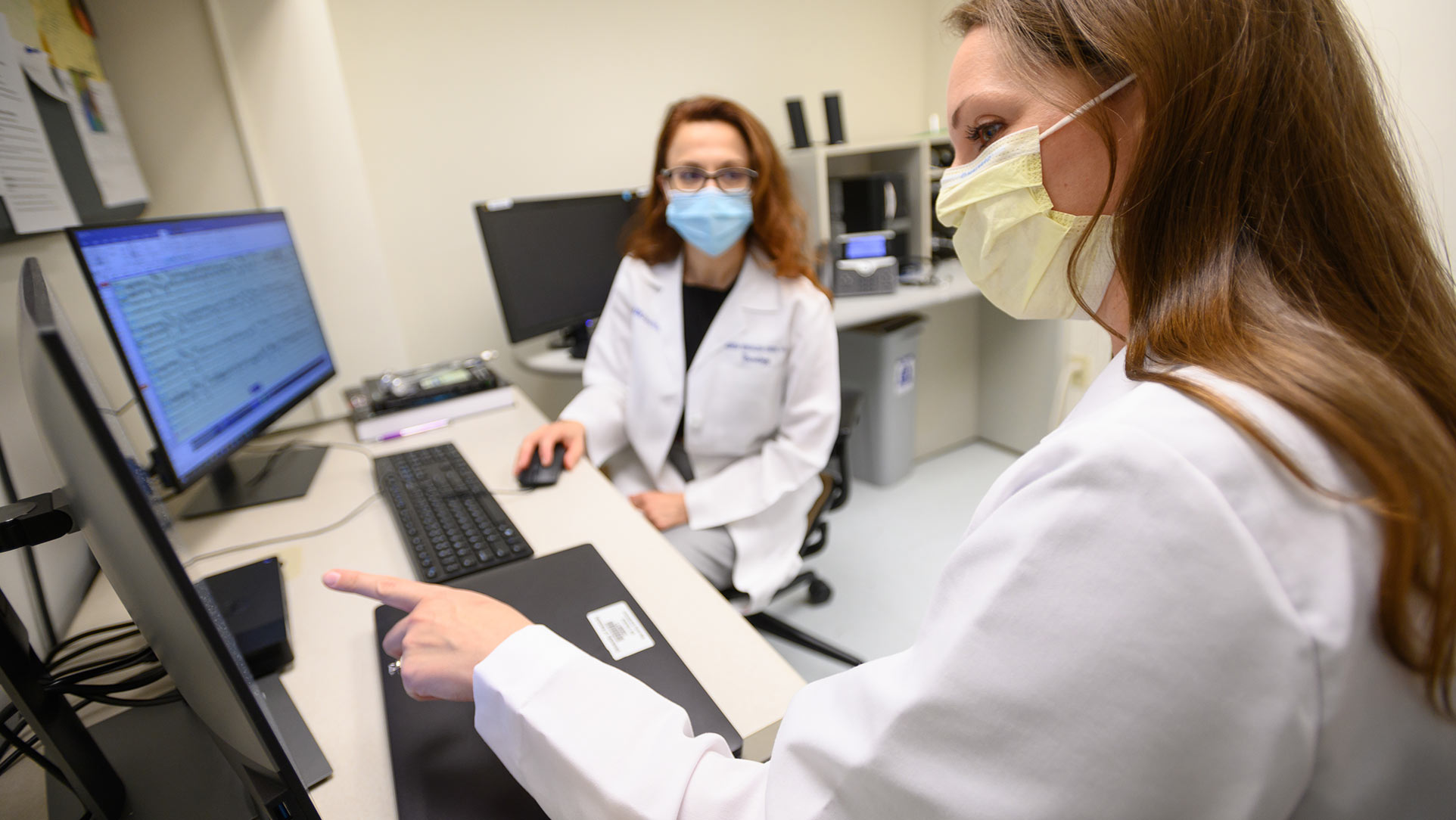 “This field is really amazing. There’s a whole community of clinicians and researchers that come together and work together.”

Dr. Bensalem-Owen has seen, over and over, how an epilepsy diagnosis and treatment not only affects the patient, but the entire family. That’s why she’s committed to finding solutions for her patients and their loved ones.

“When someone has a chronic condition, even if the crisis happens intermittently, we never know when they’re going to happen. So, patients’ lives are on hold. It is devastating for patients and their families because it disrupts their whole life, and the entire family dynamic. In addition to the risk of injuries that can occur with seizures, there is also a risk of death. So, I treat the patient, but I also care for their family.” 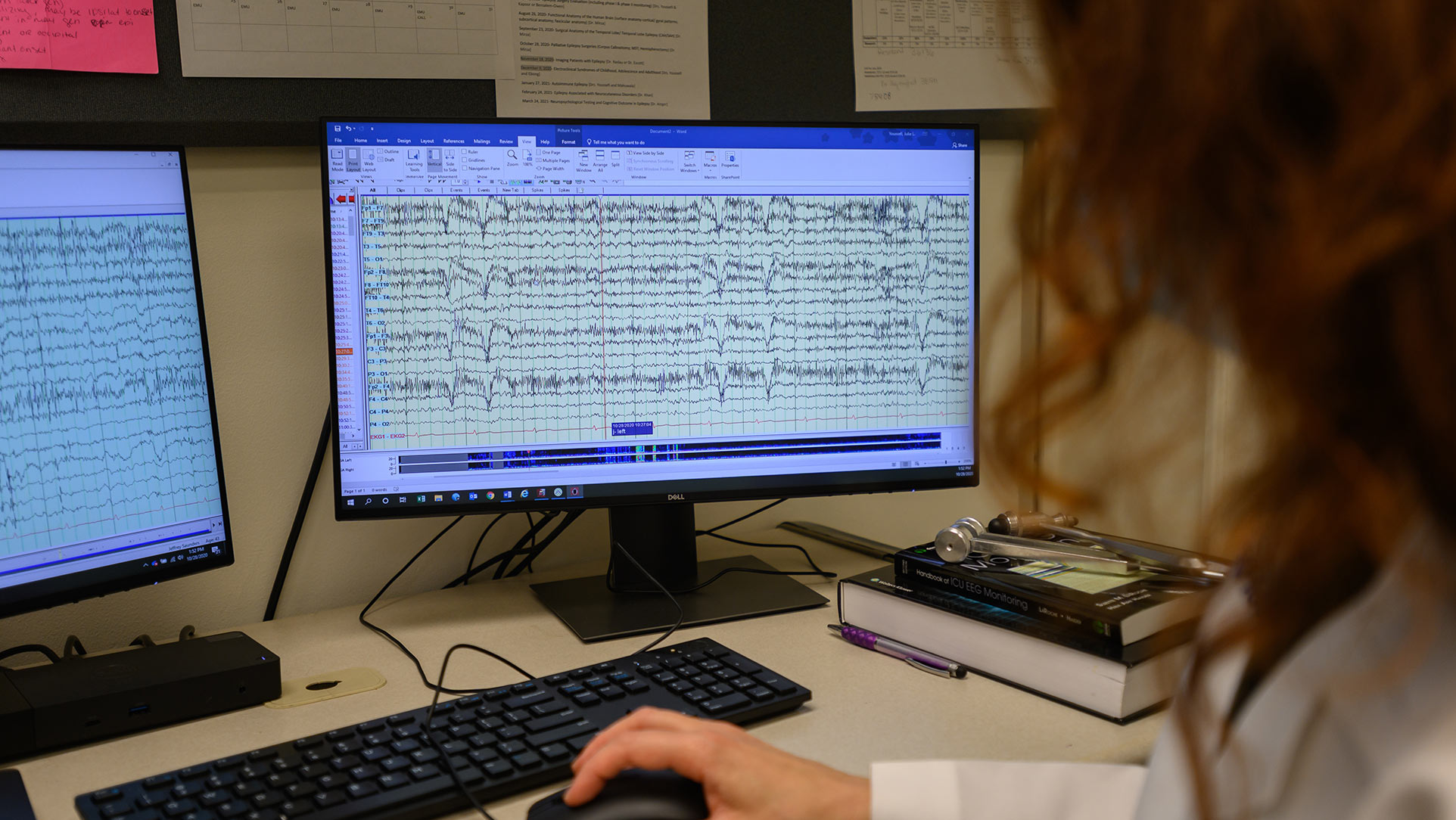 The field of epilepsy continues to expand exponentially, with alliances between the fields of research, treatment, medical engineering and electrical engineering.

Under Dr. Bensalem-Owen’s direction, the Epilepsy Program has become a leader in the state. The program’s ACGME-accredited Epilepsy Fellowship training is Kentucky’s first. The Epilepsy Program was also the first in the state to place innovative devices such as a responsive neurostimulator (RNS) and a deep brain stimulator (DBS) in epilepsy patients. Dr. Bensalem-Owen herself was elected by her peers to serve as the Secretary and Treasurer of the NAEC, which, in addition to accrediting epilepsy centers, has as membership of more than 230 specialized centers in the United States. She also serves on a number of other regional and national organizations’ boards, helping lead the field of epilepsy treatment and research and strengthening connections between UK HealthCare’s Epilepsy Program and other programs across the country.

Those connections have led the program to pursue partnerships with other colleges and researchers across the University and across North America. The Epilepsy Program is part of a newly-funded alliance, called The FINDERs, which brings together radiologists, neurologists, neurosurgeons, neuropsychologists, neuroimaging researchers, physicists, and electrical engineers, all driven to help improve outcomes for seizure patients. It’s a diverse and interdisciplinary approach to solving a problem as complex as seizures. That wide-ranging sense of collaboration and innovation is emblematic of the program’s overall approach to patient care. 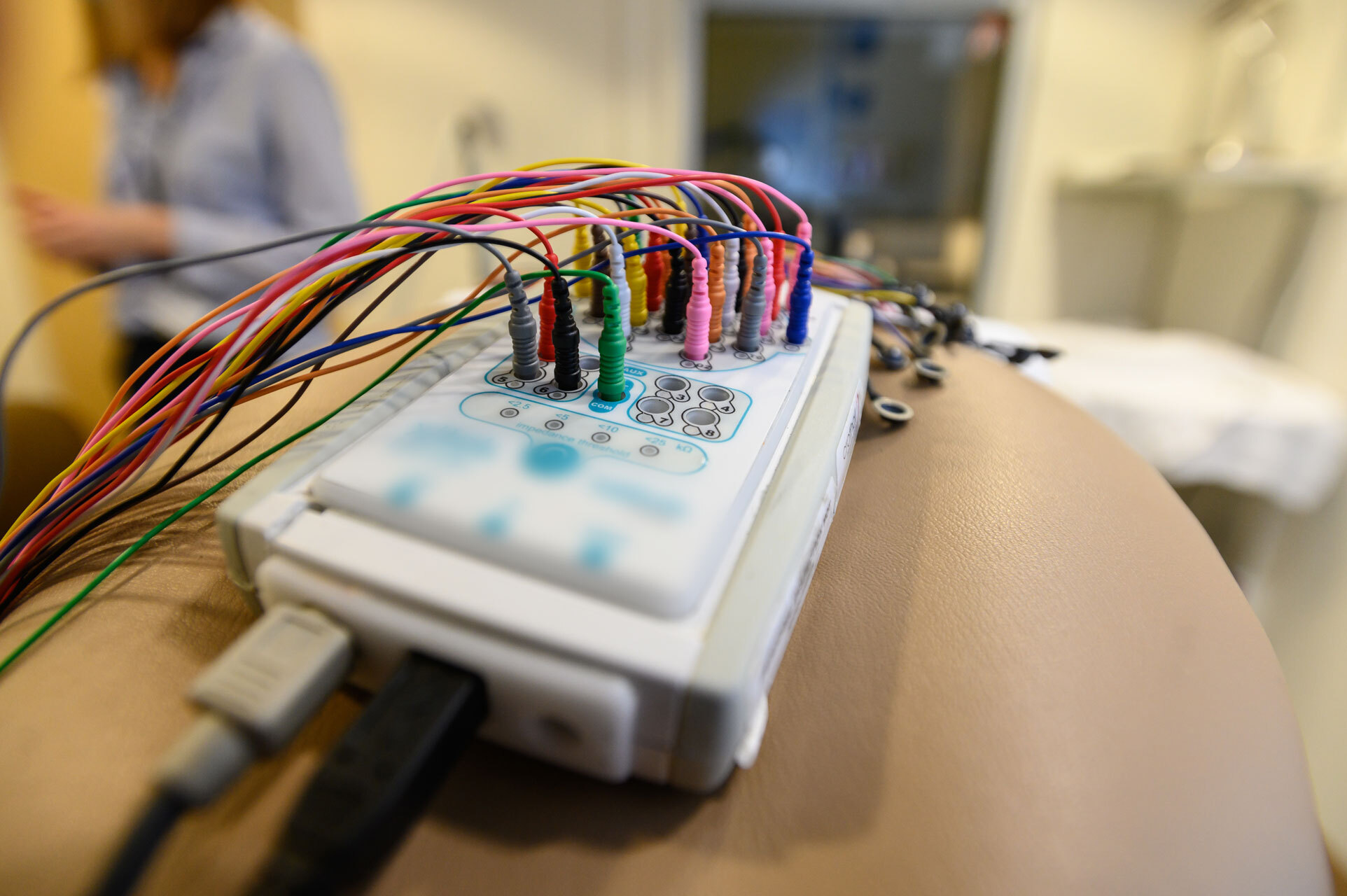 UK HealthCare’s Epilepsy Program offers a higher level of testing, monitoring and surgical care for patients than lower-level centers can.

“It’s more than just the clinician, it really is a team effort. The physicians are always put forward, but we can’t do the job that we do without the nurses, the EEG technologists, the neuropsychologists, the neuroradiologists, and the neurosurgeons,” she says. “It’s really a community, and now we even have researchers [on the team]. So, this is what I tell patients ‘You’re not alone in this. You have a whole team behind you—people that you see, and people that are doing the work behind the scenes.’” 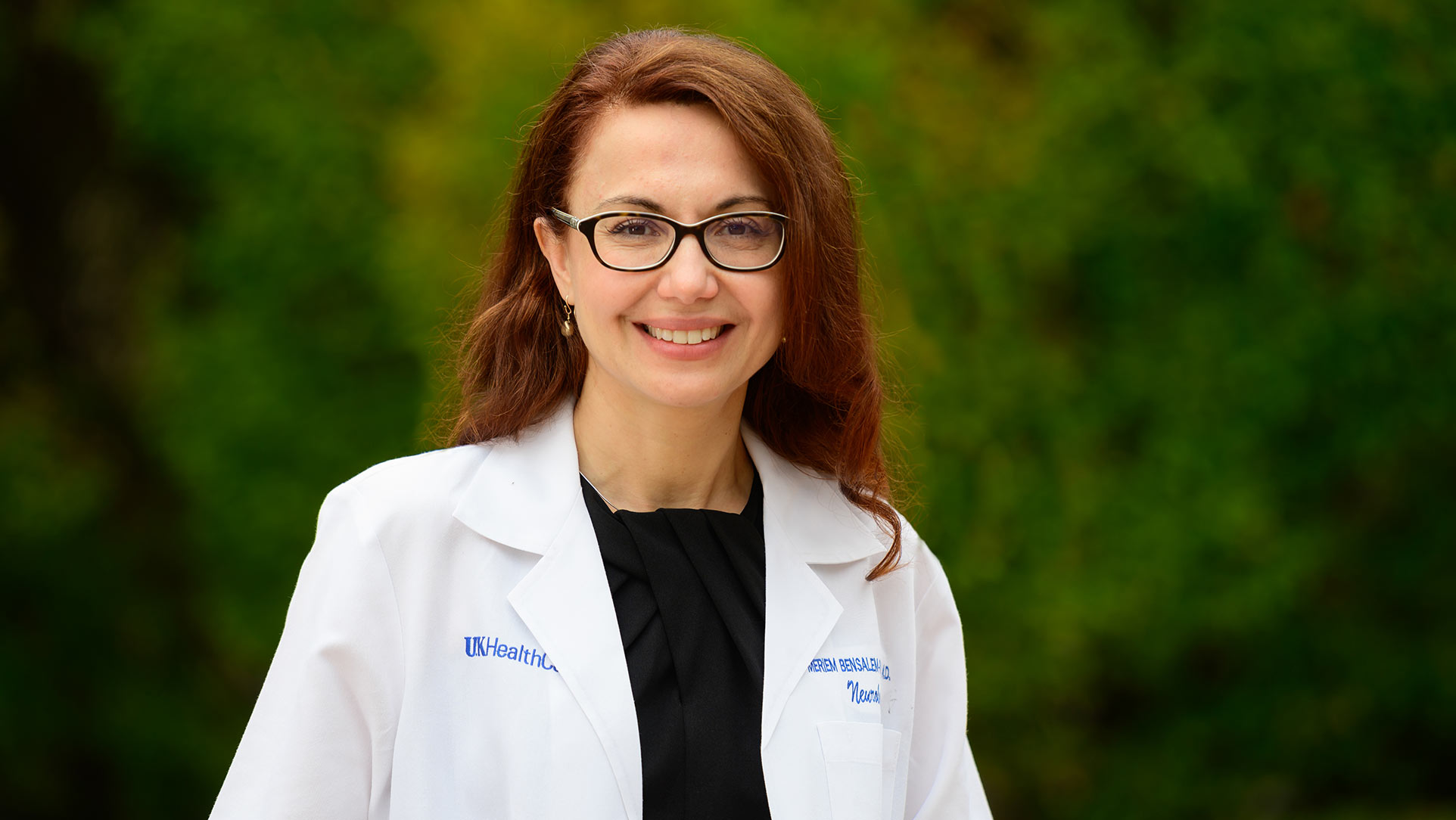 “I tell my patients I don't want to give up on them. I'm here to support them through their journey.”

Learn more about the work of Dr. Bensalem-Owen and her team

“He’s just a kid who wants to be a kid.”Moms, Pediatric Services