“In 2015, after about 165 triathlons, my groin was tightening and I was starting to limp a little bit. Eventually, I was riding a stationary bike inside and I couldn’t get my leg over the bike seat. I actually crashed on the workout room floor because I couldn’t get on my bike and I just said, ‘Something’s not right here.’” 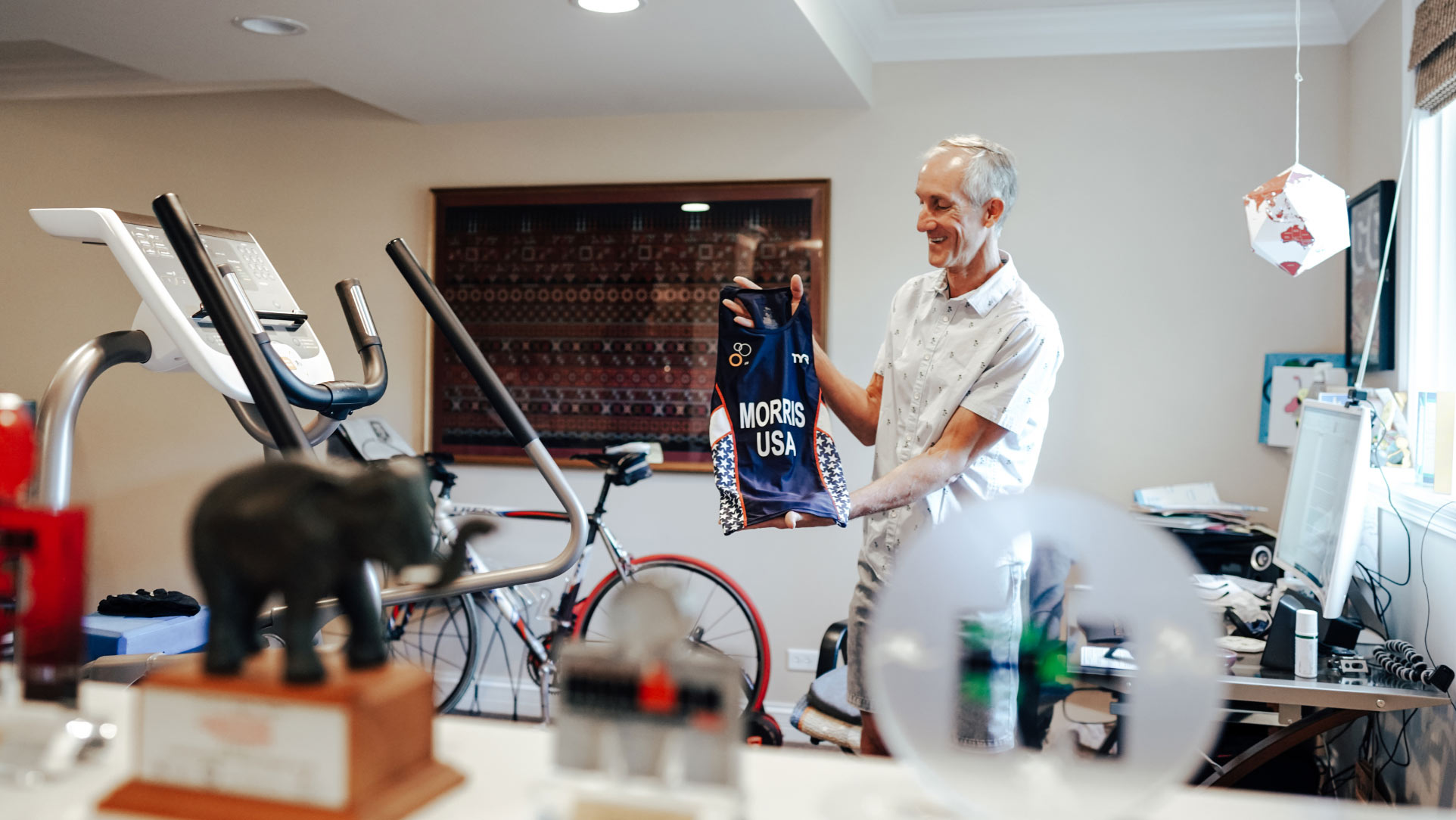 Doug shows off mementos from his international competitions in his home outside Chicago.

Doug Morris has completed 172 triathlons in his life.

At the age of 57, he became the first person to complete a triathlon in all fifty states and six continents. But a lifetime of pushing his body to its limits finally started to take a toll on him. As a man with a limitless hunger for a challenge, having to admit that he couldn’t move like he used to was devastating for Doug. 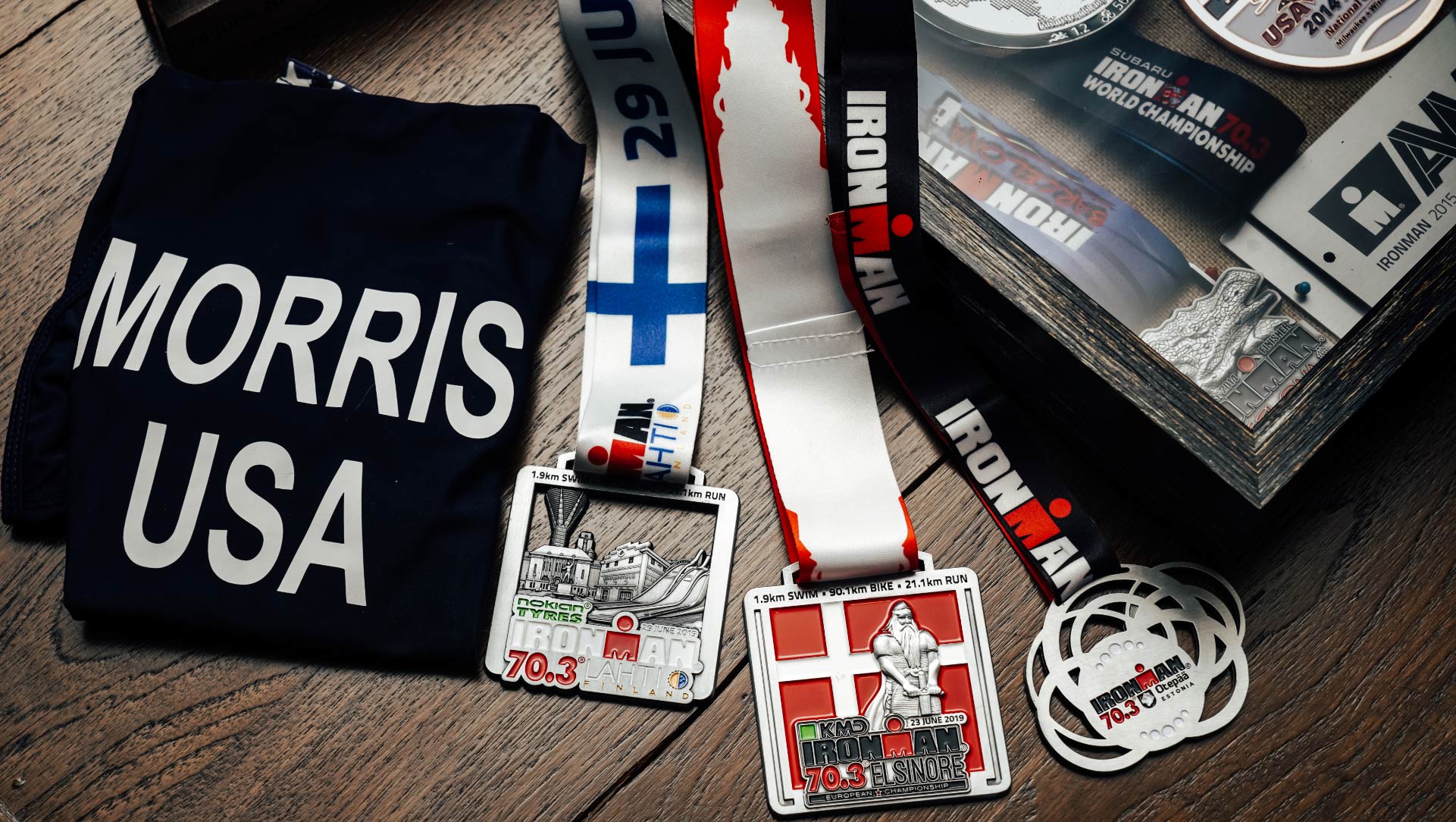 Doug has competed in triathlons—including several prestigious IRONMAN competitions—all over the world.

“I was truly in denial. I saw three different surgeons over a period of two years. I really didn’t want to give up on competing in triathlons. One doctor said ‘When you get to the point where you can’t tolerate the pain, come see me again.’ I went to another specialist and he said ‘You’re not going to run, you’re not going to do triathlons.’ I wasn’t ready to hear that. I saw a third surgeon, but he wasn’t athletics oriented, and so that didn’t go anywhere.” 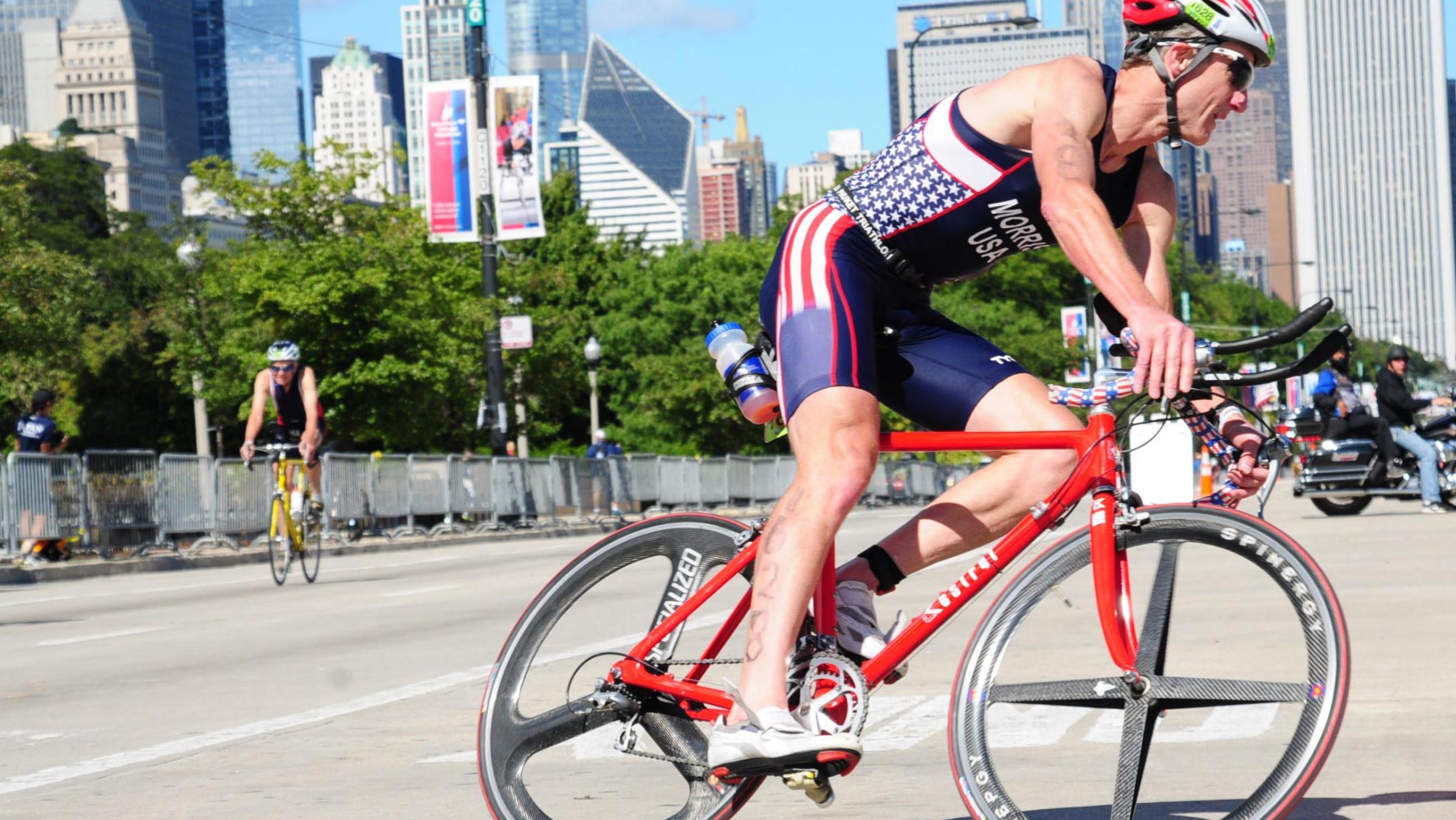 “Dr. Duncan fully understood the mindset of a top-tier athlete.”

Doug was discouraged, but knew that he didn’t want to stop doing the things that he loved. That’s when he came across an article about Patty Lane, a fellow triathlete who had been cared for by UK HealthCare Orthopaedic Surgery & Sports Medicine. After reaching out and speaking with Patty, Doug made the decision to call Dr. Stephen Duncan, an orthopaedic surgeon at UK HealthCare who performed Patty’s hip replacement. 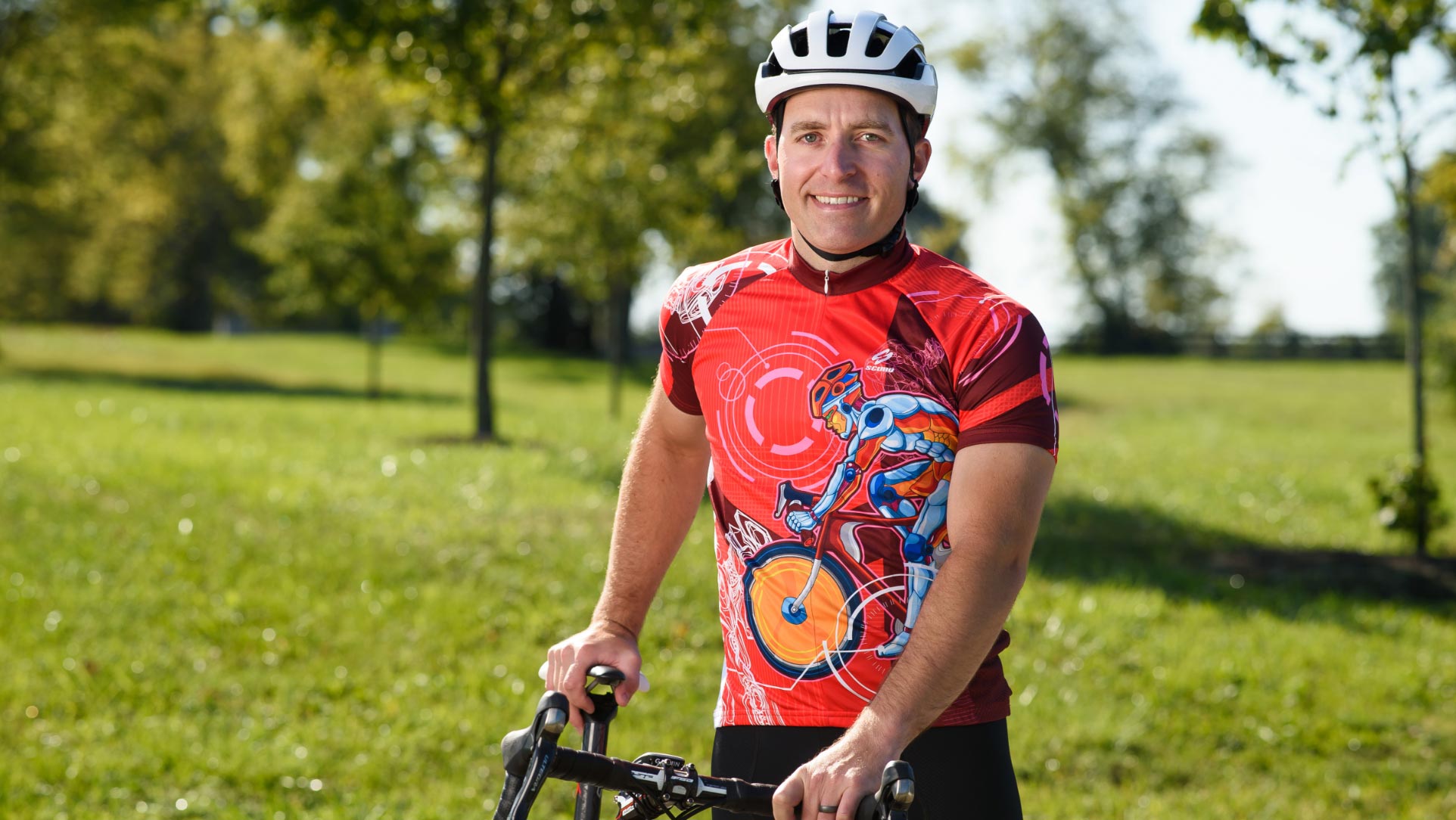 As a token of his appreciation, Doug gave Dr. Stephen Duncan—a fellow cyclist—a special orthopaedic-themed jersey as a gift.

As an avid cyclist himself, Dr. Duncan understood Doug’s need to continue competing—which is why he knew how to help Doug in a way none of his other doctors could. “If you want to still be active, there’s solutions that we need to provide for these people to give them quality of life,” said Dr. Duncan. “For me, I love to be active. I’d go nuts if I couldn’t be physically active.”

With that shared mindset, the two developed a plan together, with Doug traveling to Lexington from his home near Chicago for appointments. They made the decision to replace Doug’s left hip, using a dual mobility hip replacement that would offer more durability as he continued competing. 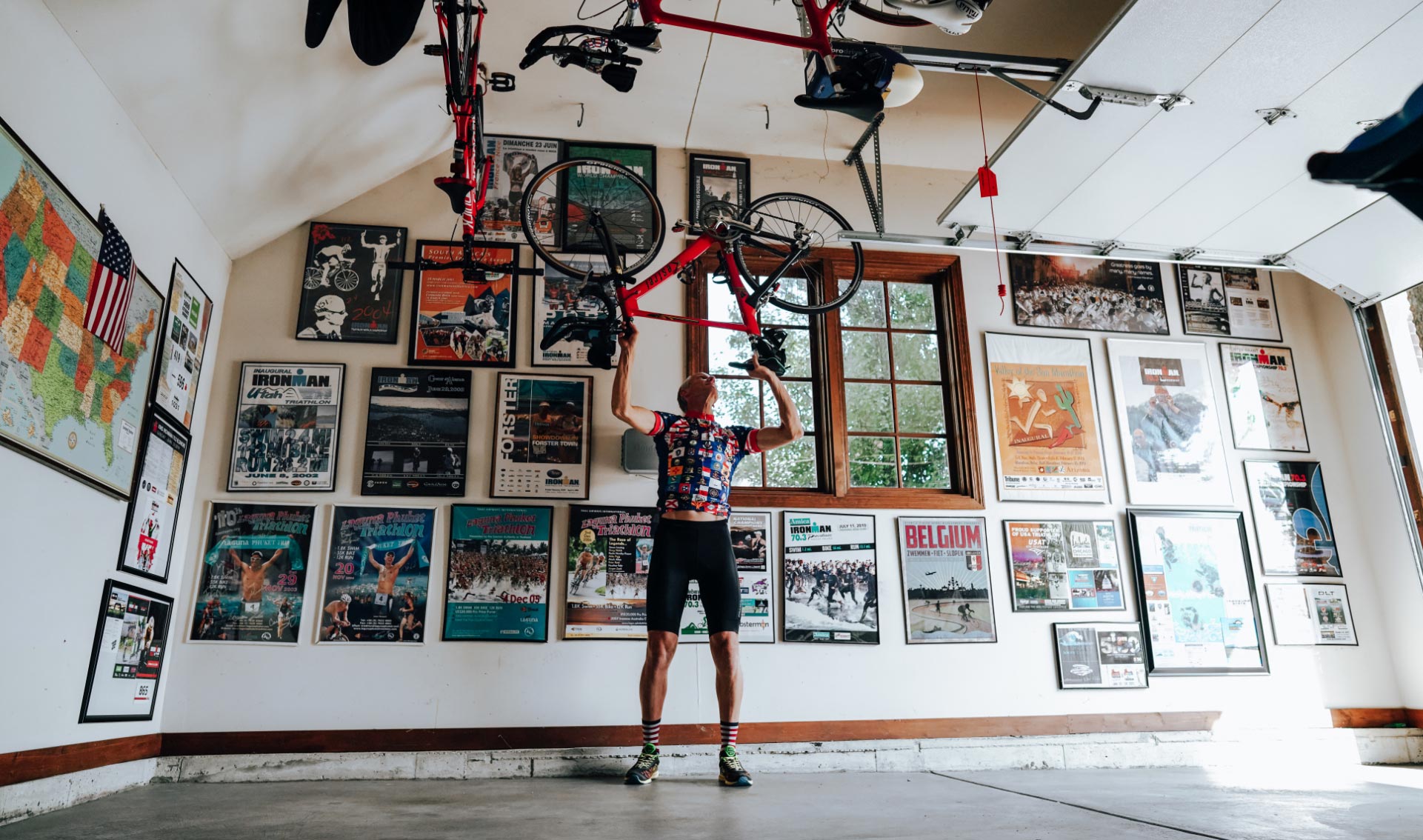 “I don’t think anybody would really believe that I had a total hip replacement.”

“From the get-go, Dr. Duncan said ‘I know you’re a triathlete. I know you want to get back into it. We will do everything we can to get you back to doing what you love.’ None of the other three doctors really did that. That’s how Dr. Duncan stood out. He was a cyclist and shared stuff he went through, what we could do, and what I could do if I lived up to my commitment. I showed up on October 3rd, 2018, and he cut off the top of my femur and put some titanium and plastic in there. I was up and walking by that afternoon.” 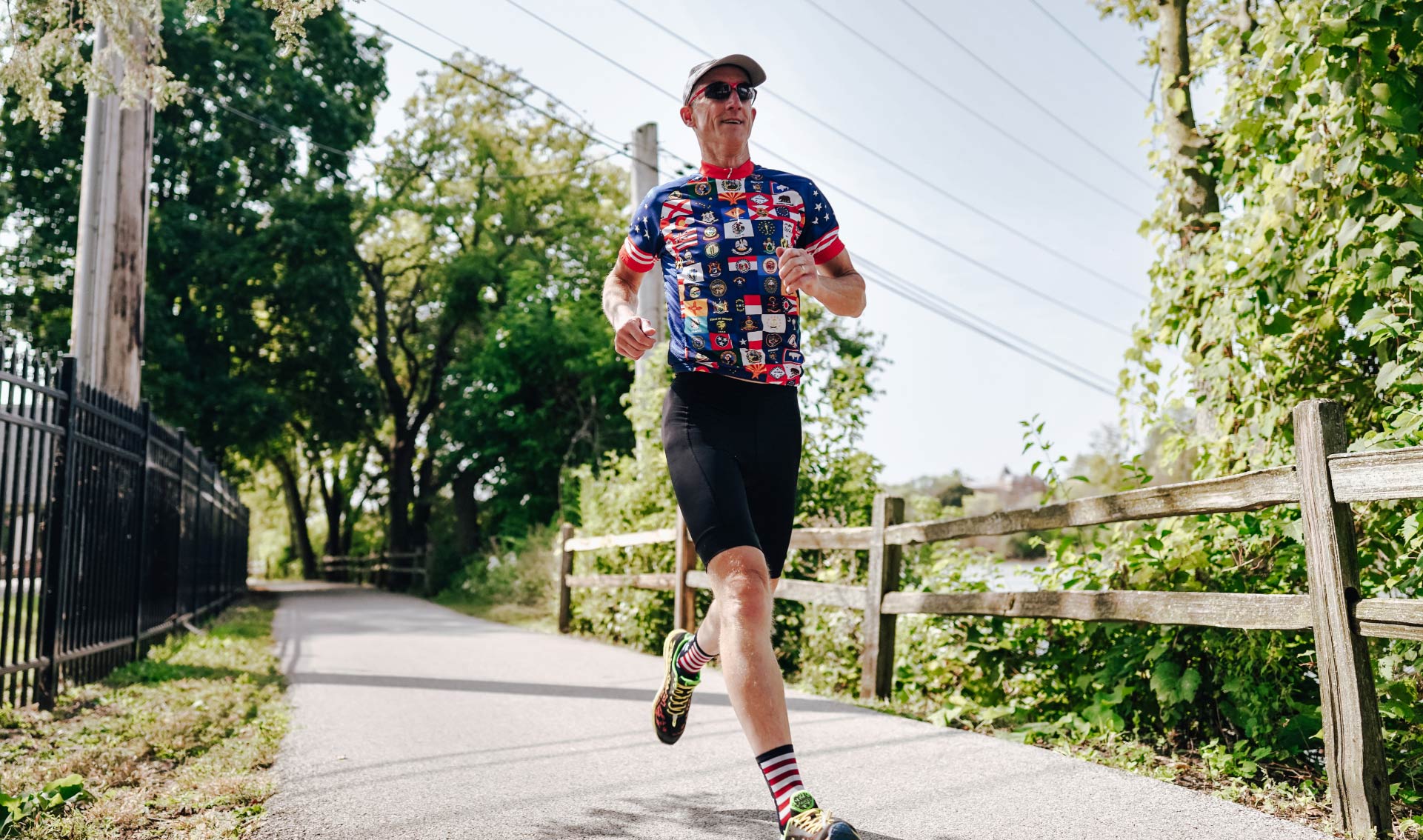 Even though COVID-19 has shut down competitions, Doug stays in shape by biking, running, and swimming near his home.

Following his surgery, Doug was eager to get back up and moving. He followed every instruction given by Dr. Duncan, and dedicated himself to physical therapy for six months back home in Chicago. In April of 2019, Dr. Duncan cleared Doug to begin running again. In June of 2019, only nine months after his hip replacement, Doug hopped on a plane to Europe and competed in three IRONMAN 70.3 triathlons over three consecutive weekends—finishing fourth in his age group at the European Championships, and earning podium spots in the other two races. 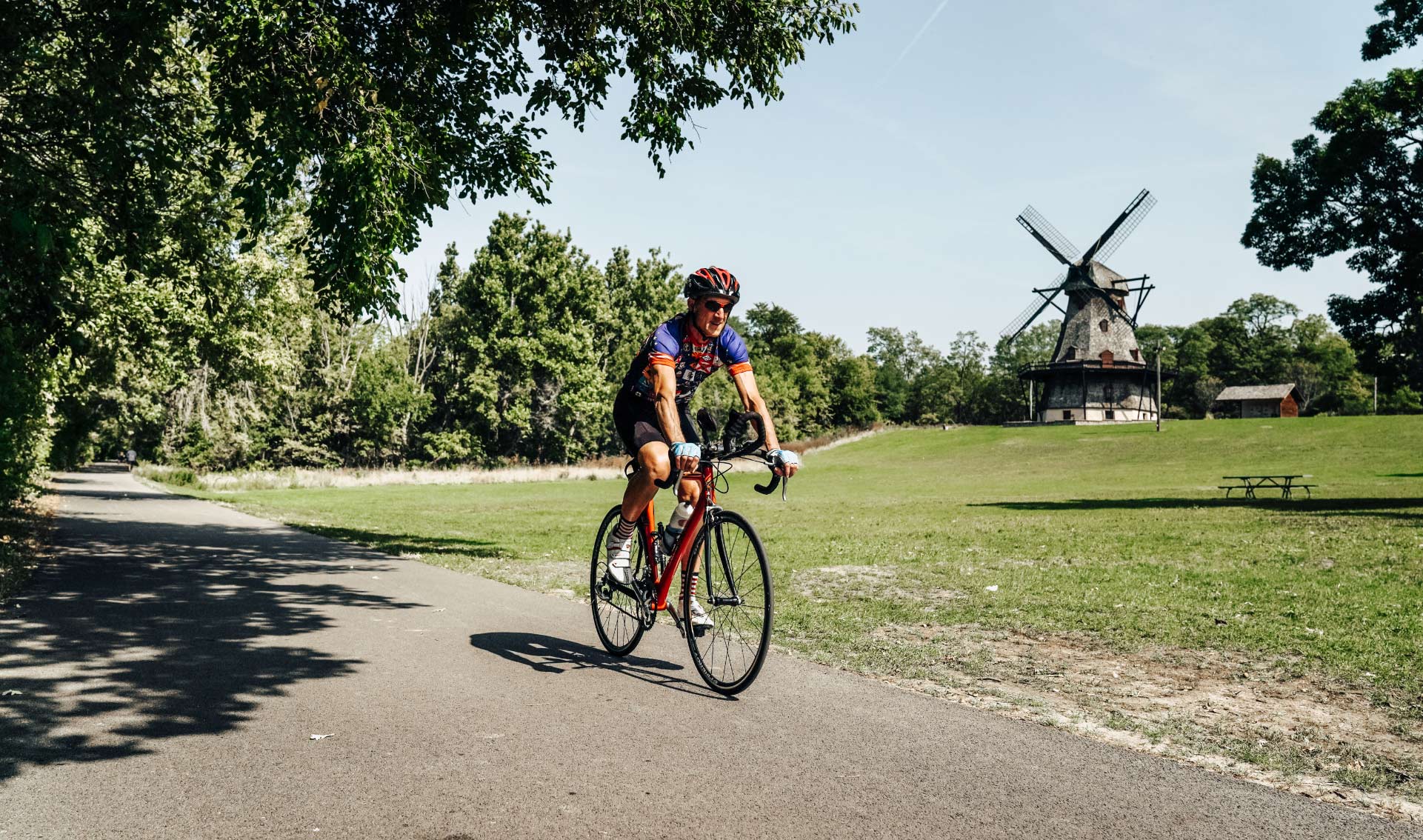 “I have no lingering after-effects in my left hip. There’s been no knee issues. The hip’s just great.”

“When I got back stateside from the European trip, I wrote Dr. Duncan and the whole team. I got emotional because they don’t understand just how much they have brought back to my life. Once I had my goal in mind to get back to being a triathlete—I just had to find the right person to help me. I would definitely tell people if that’s what they’re looking for, go out and seek it. If it’s a hip or a knee, go see Dr. Duncan. If I hadn’t found Dr. Duncan, I’m not sure what I would have done.” 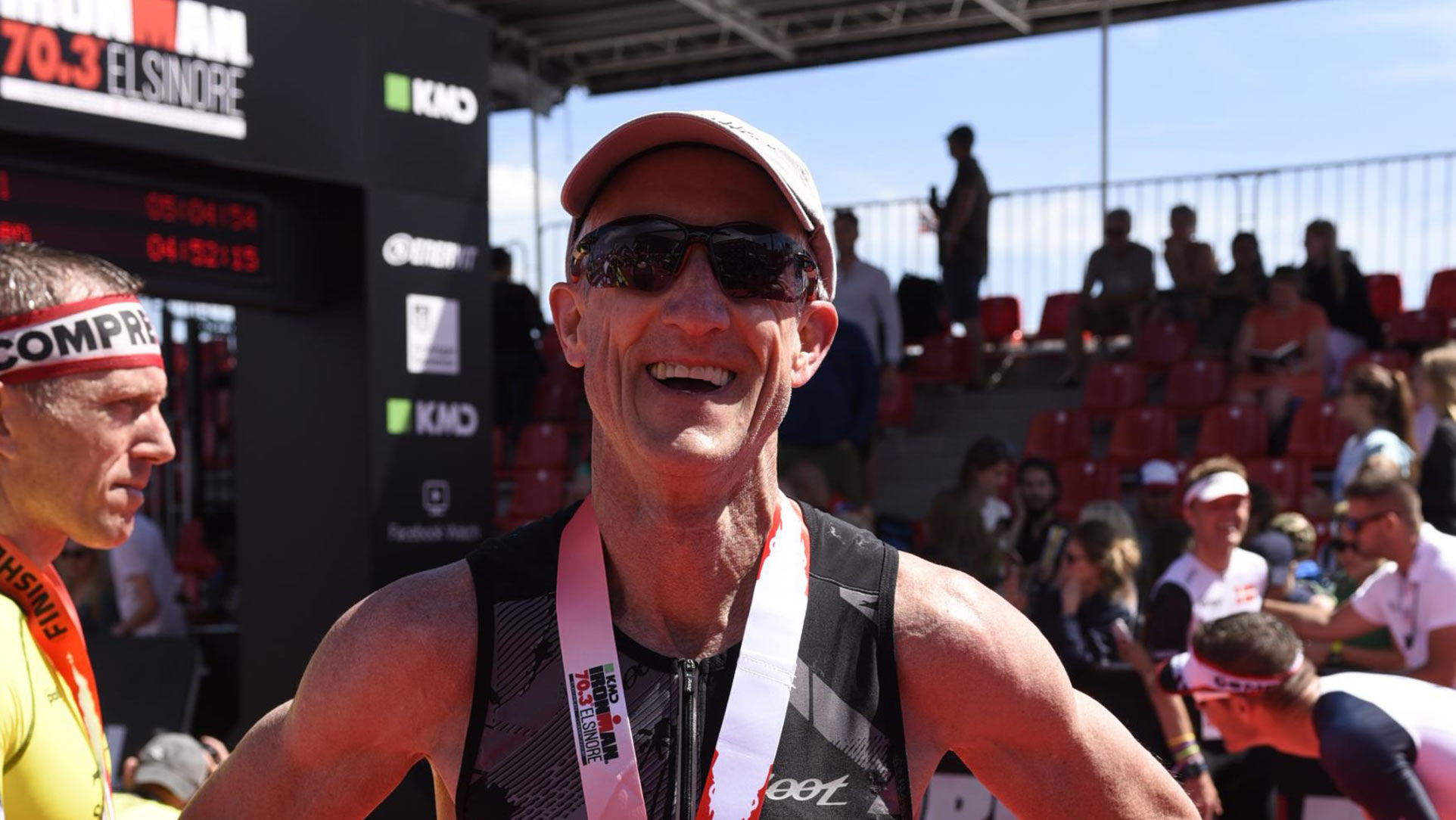 “I’m pretty stubborn. Once I make a goal, I’ll achieve it—I just had to find the right person to do it.” Photo Credit: marathon-photos.com