“I had to learn how to walk again.”

“I was a jump away from having my bone actually snap in half. That’s how bad it was.” 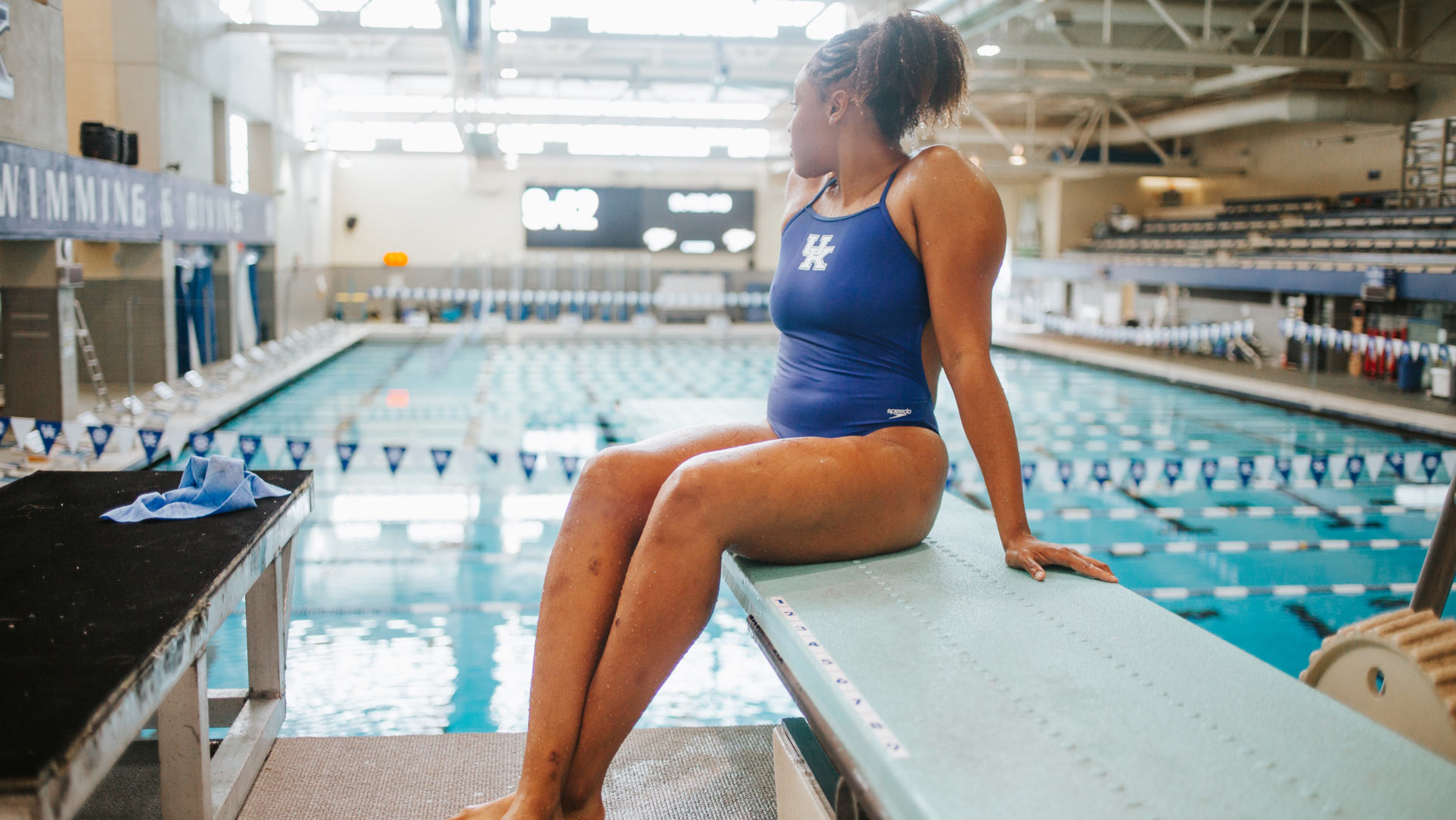 “I had no idea what was wrong with me for about five months.”

In January of 2019, Jaida Garrett began to experience pain, discomfort and numbness in her left leg and ankle. A diver at the University of Kentucky, she assumed it was something minor like tendonitis. But after she underwent injection treatments, the pain didn’t subside—it only worsened. 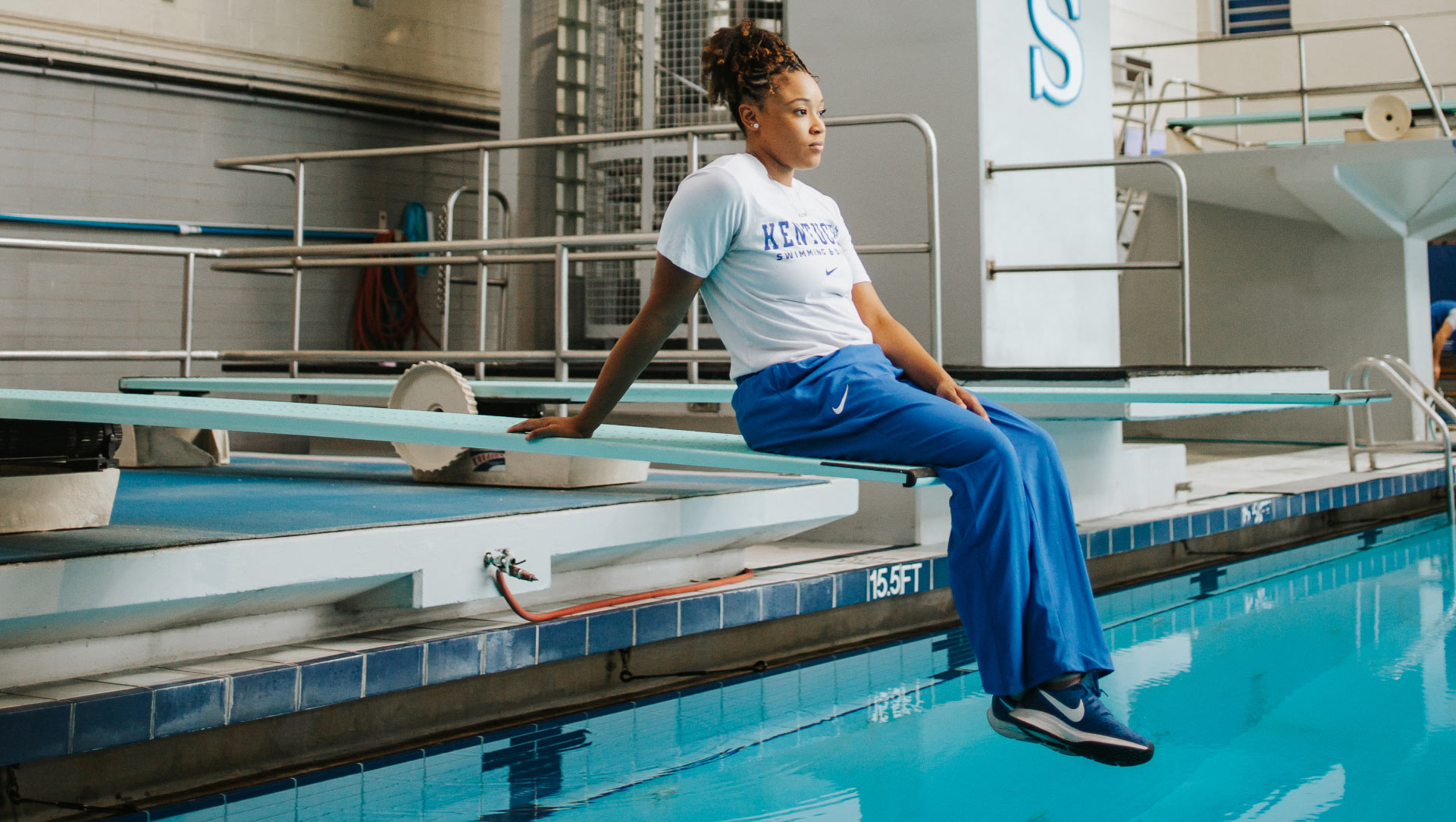 “It was so hard to accept that I was injured and out at the time.”

By May, the pain was so severe that Jaida needed to have additional imaging performed. Dr. Kimberly Kaiser, a sports medicine specialist at UK HealthCare Orthopaedic Surgery & Sports Medicine and the UK Swimming & Diving team doctor, reviewed the new scans and discovered the source of Jaida’s pain: five different stress fractures on her left tibia and one fracture on her left fibula. Jaida’s bones were so fragile that her doctors warned her that her next jump could shatter her leg. For the next three months, Jaida was on a scooter, keeping all weight off her left leg in hopes that it would heal itself. 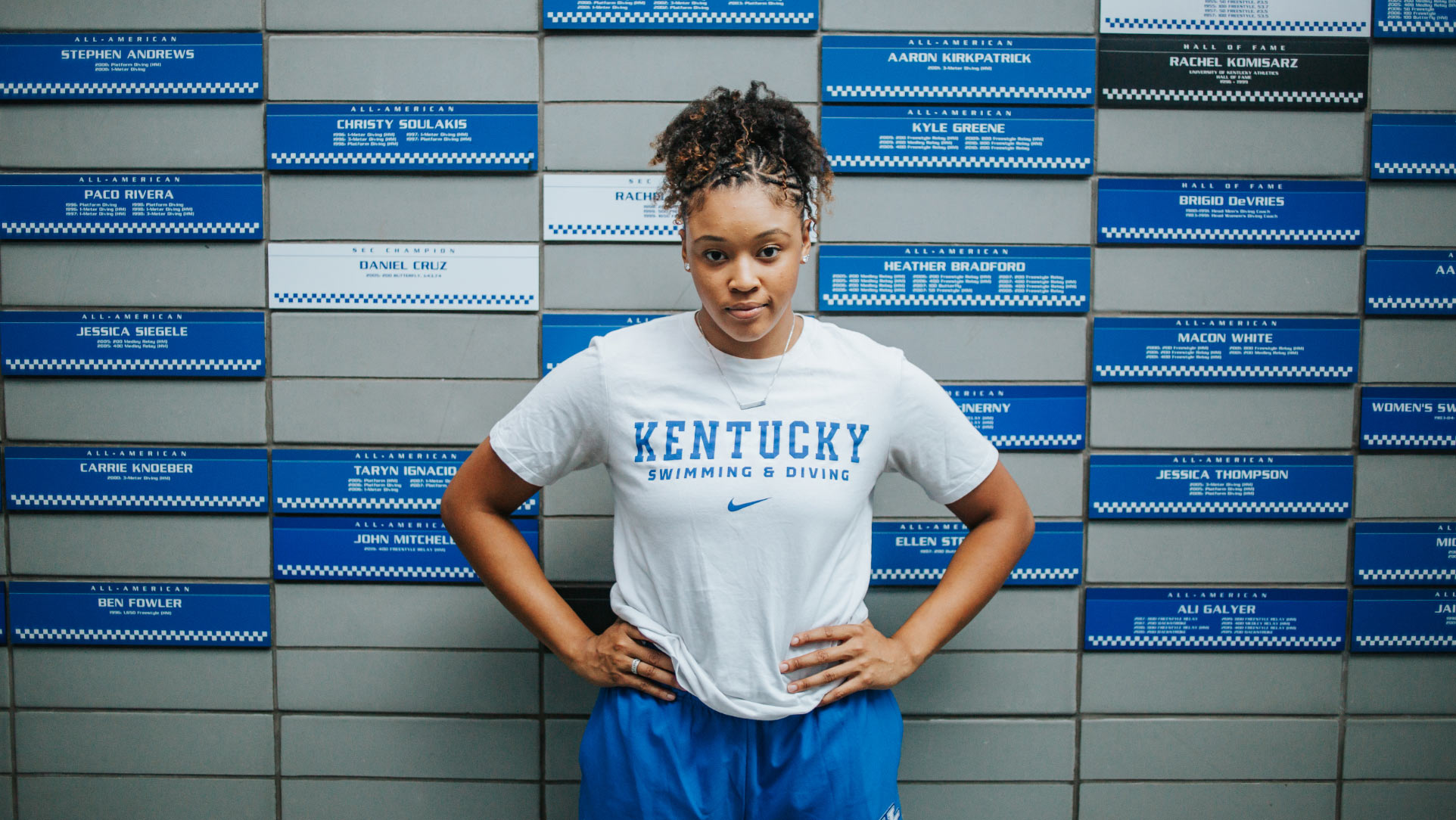 After walking onto the team freshman year and building her skills rapidly, Jaida was devastated to end her junior season early.

“It was about mid-July. I remember that day because I was so heartbroken. When I got in the office, Dr. Kaiser said ‘I hate to tell you this, but there’s fractures on your right leg as well. They’re not as bad as your left leg was, and there’s a possibility that it can heal within the next three months by itself. If they don’t heal, that’s when we may need to look into surgery.’ I had already done three months off my left leg, I didn’t prepare for my other leg to be broken or to be scooting with two boots.” 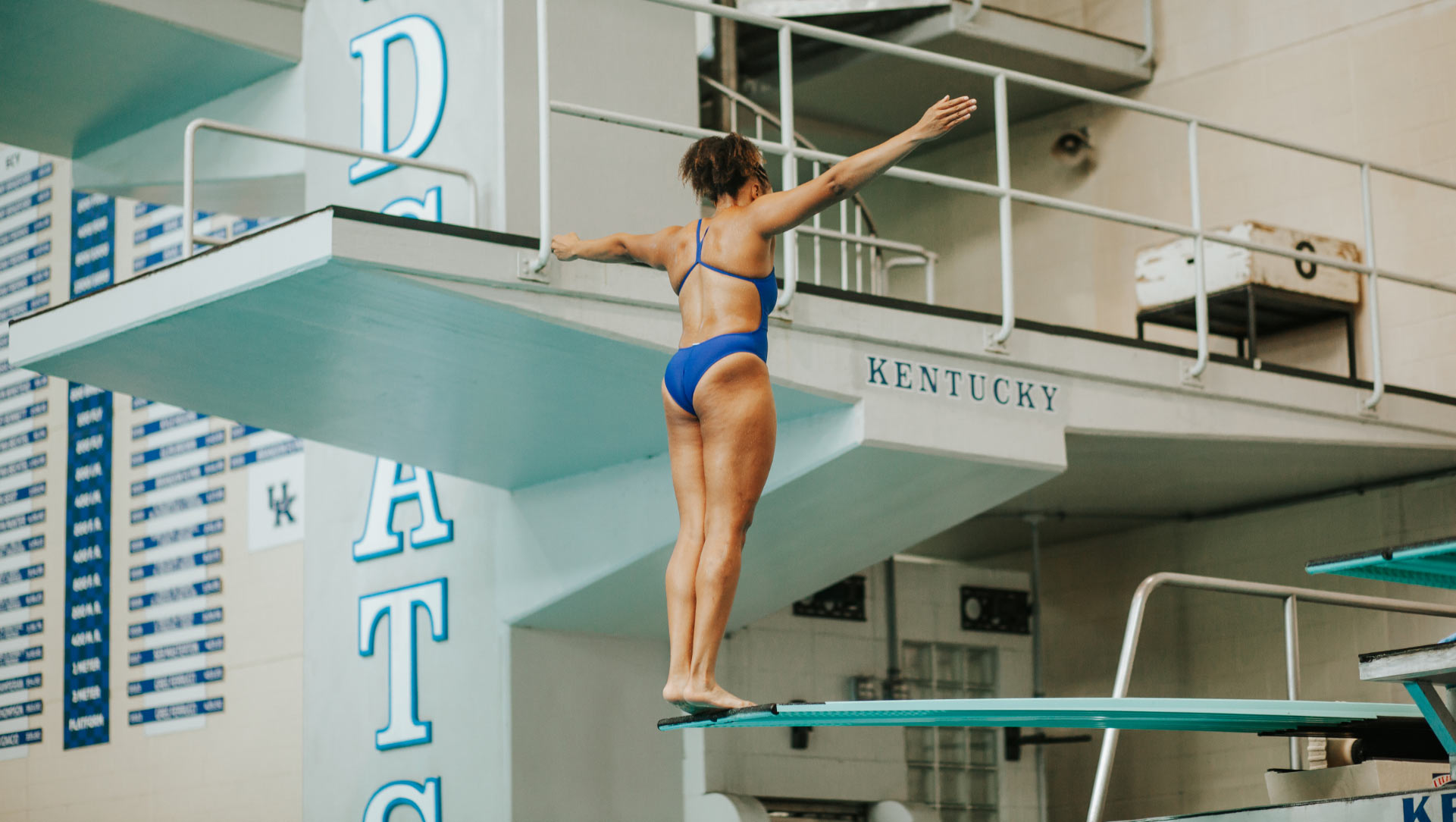 “I’m a power diver. I use my legs for everything, and they are super strong.”

As a diver, and previously as a gymnast, Jaida’s power comes from her legs—an area where she’s always been strong. Now, she was losing that hard-won strength due to years of overuse that left her bones prone to breakage. She faced a choice: the uncertainty of waiting for her legs to recover on their own, or the daunting prospect of repairing them, one by one, with an intensive surgery called a tibial intramedullary nail procedure, which would insert a titanium rod into her shin. Jaida chose the surgery.

“UK HealthCare is super-good at making people feel comfortable. They’re not going to force you  into anything, they didn’t push me to have surgery. But I knew I didn’t want to be in a wheelchair for the next six months.” 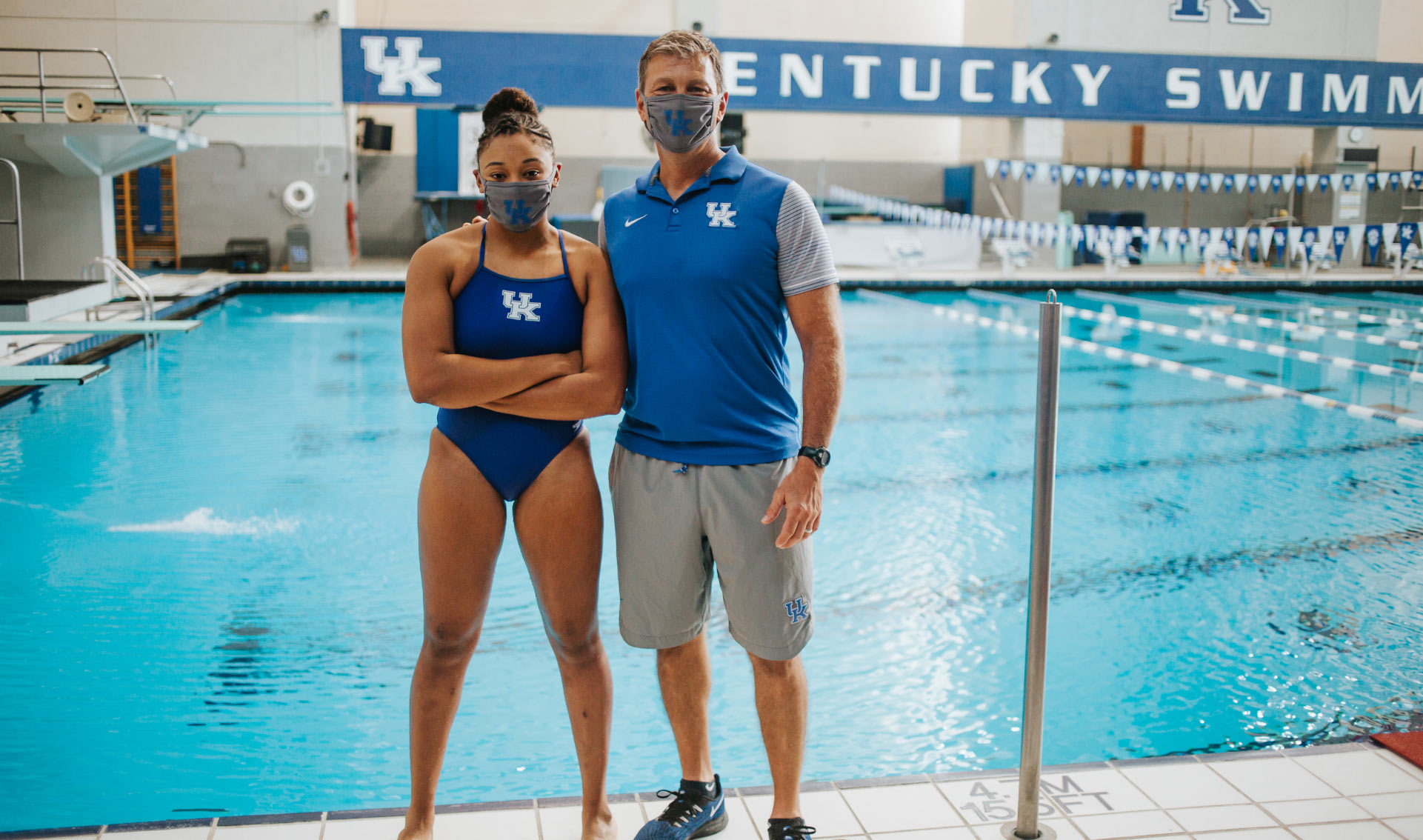 Jaida credits her diving success to her coach, Ted Hautau, who has been by her side since she was a freshman.

The recovery from her initial surgery—performed by Dr. Arun Aneja, a surgeon who specializes in orthopedic trauma—wasn’t easy. She spent two weeks in a wheelchair and three months on a scooter before she was finally walking again with her right leg in a boot. But as Jaida’s left leg slowly began to recover, her right leg only worsened as it continued to bear her weight. Just four weeks after she got back on her feet, she made another difficult decision: to have surgery on her right leg in December of 2019. 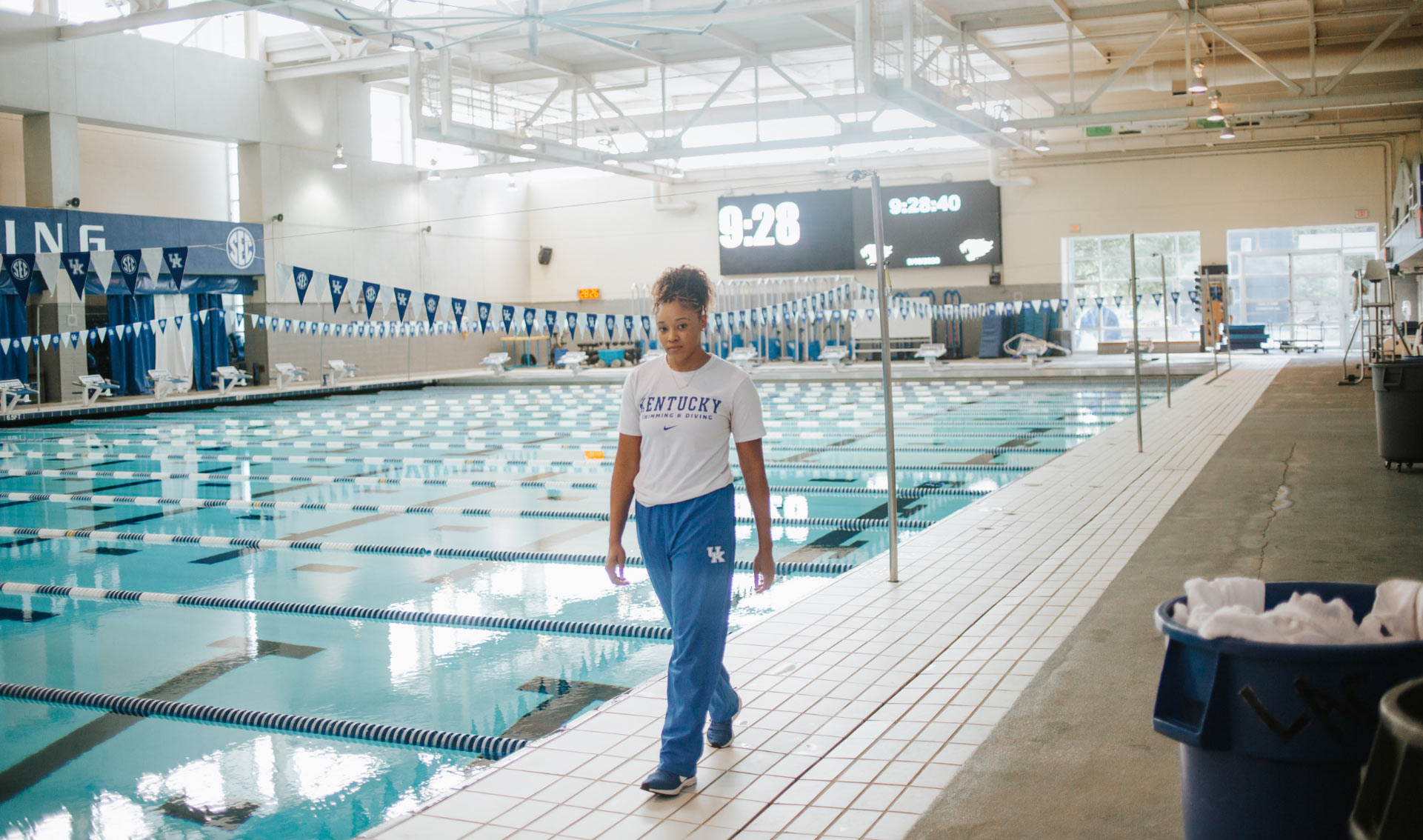 “It was so hard academically and athletically at the time, and it really took a mental toll on me.”

During those months, Jaida struggled immensely. It felt like every comeback she made was tempered with a setback. Her mental health began to deteriorate as she tried to balance her physical injuries with the stress of a pre-med academic workload. Struggling with mental health after orthopaedic injuries isn’t uncommon: roughly 15% of orthopaedic trauma patients experience major depressive disorder or post-traumatic stress disorder. As Jaida started to feel less and less like herself, she sought help from a psychiatrist.

“I was low. I was super, super low. I was dealing with depression. It was so rough. I finished my finals pretty well, and then the day after my final, I had surgery on my right leg. Looking back on 2019, it was horrible. But at the same time, it was good. My character was built in a way that it probably wouldn’t have been built if I didn’t go through it.” 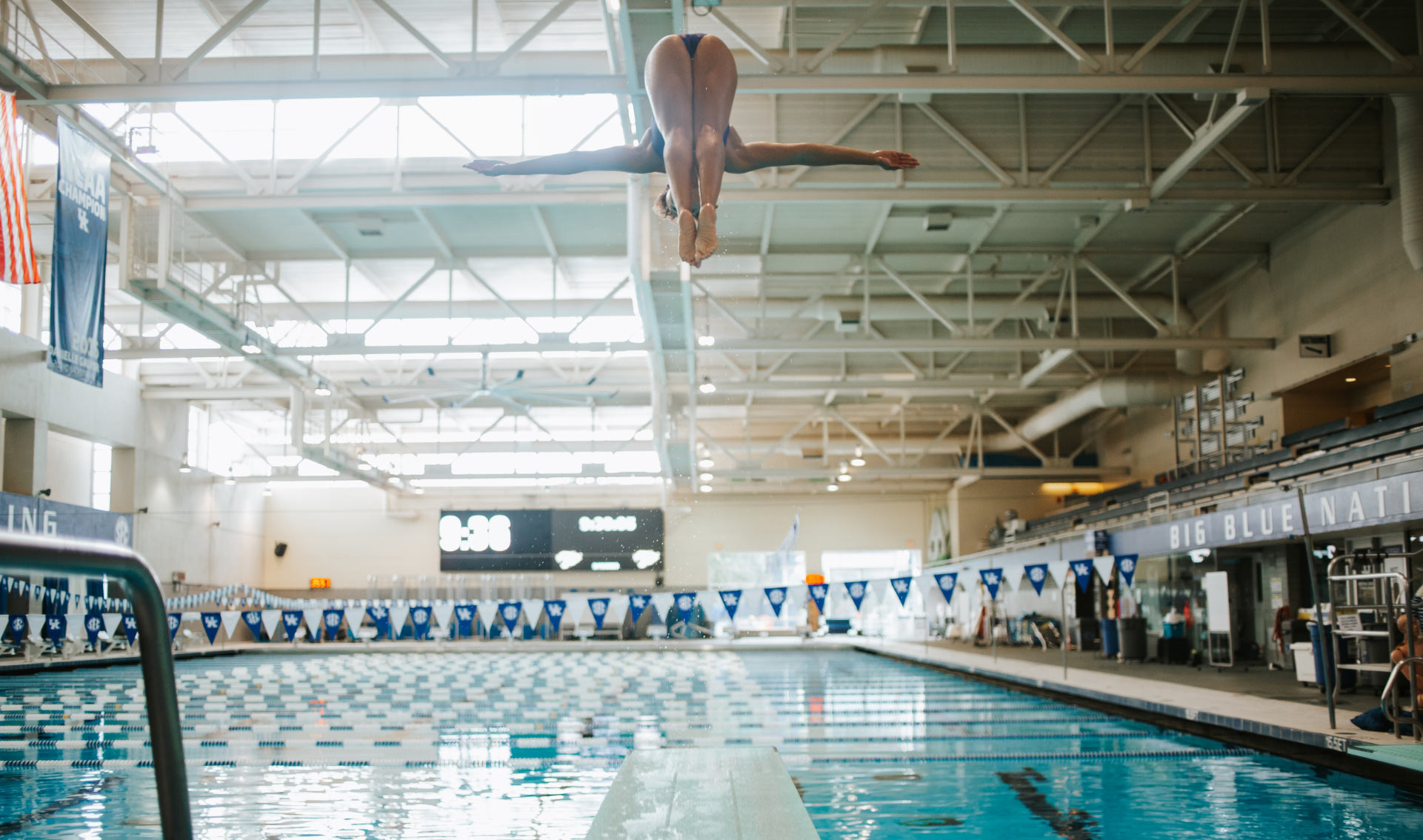 “The first dryland flip that I ever tried, I was able to do off the board a week later.”

Once again, Jaida was faced with an uphill recovery from surgery—but this time, she was able to finally see progress with both legs. After relearning how to walk and rebuilding the strength in her legs, Jaida made her first dive again in February of 2020. It was a high point after more than a year of pain. Today, Jaida is fully recovered and gearing up for her senior year of diving, as well as continuing to plan for medical school and a career in sports medicine—a field she feels called to because of her own experiences with UK HealthCare. Her injuries, recovery and outlook are a testament to her incredible perseverance. 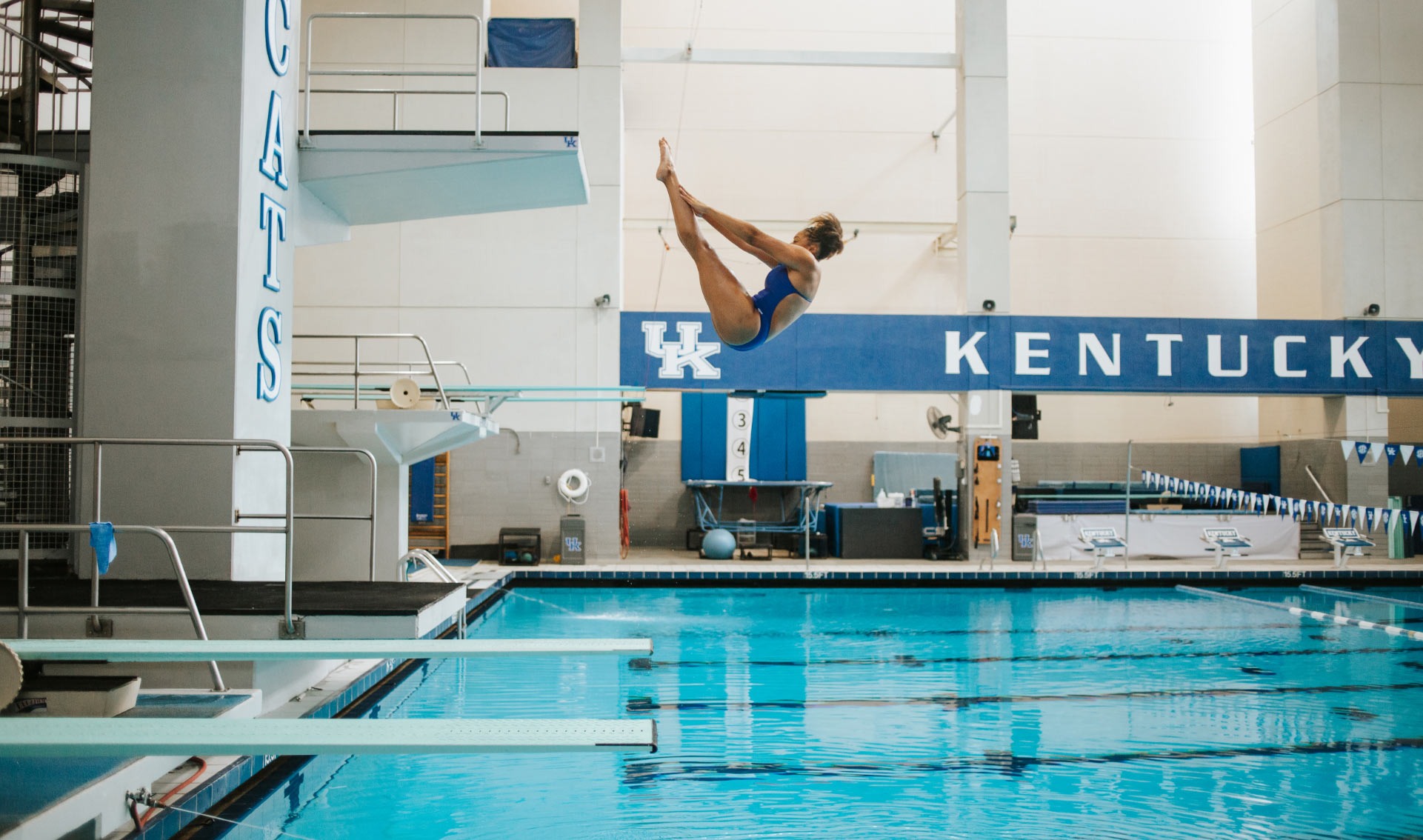 After re-learning how to walk, Jaida is back to running, flipping, and diving.

“Through all the sweat and tears, from having surgery to learning how to walk again, Jaida’s perseverance and determination are what allowed her to overcome this challenging injury and get back to being all smiles on the diving board,” said Dr. Kaiser.

“She has done extremely well,” echoed Dr. Aneja. “Her dedication to her sport and health made her an excellent patient. I am really proud of her, and wish all my patients could be as committed as her. It has been an honor to take care of her.” 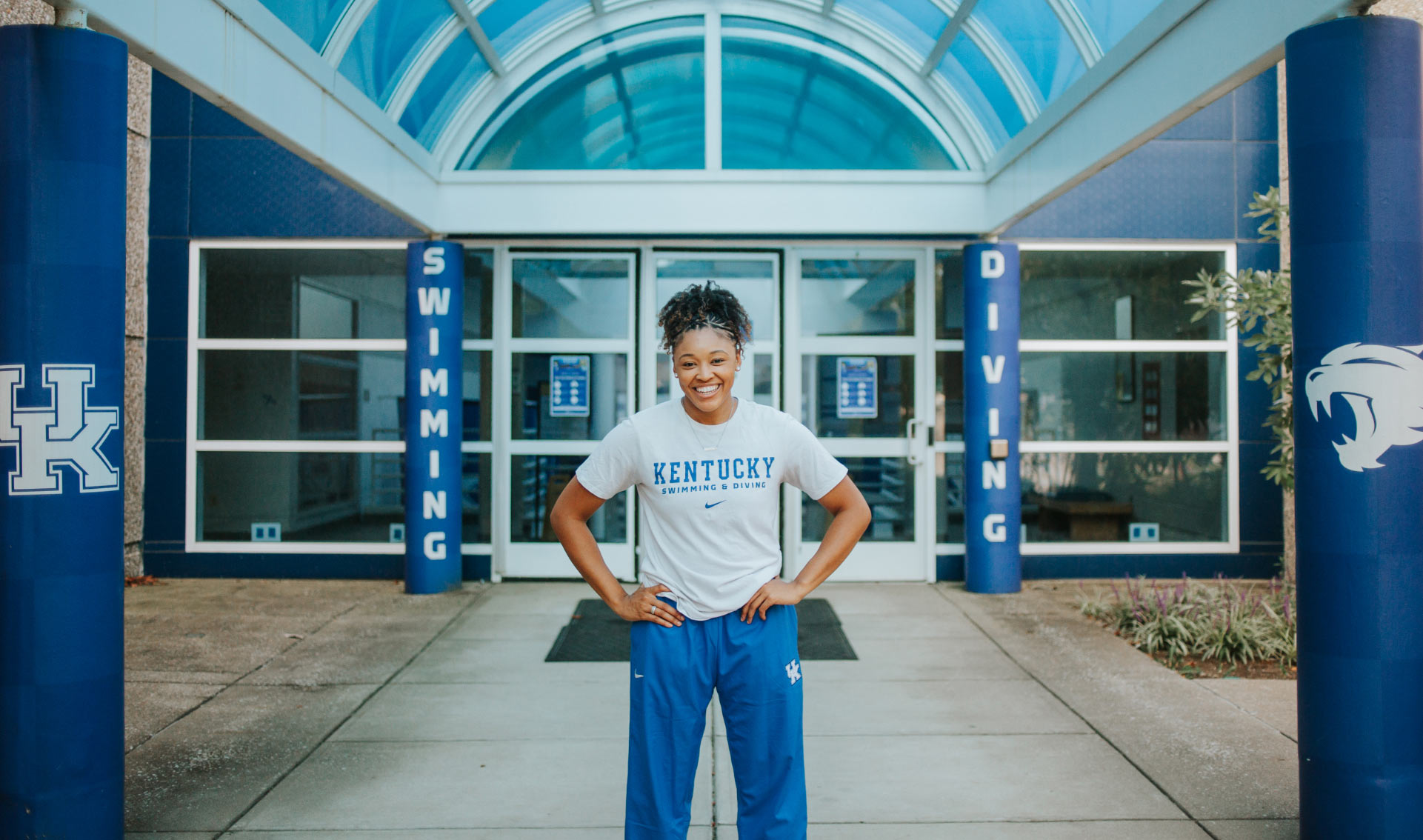 “My legs were my sport,” said Jaida. Thanks to UK HealthCare, she’s back to standing strong. 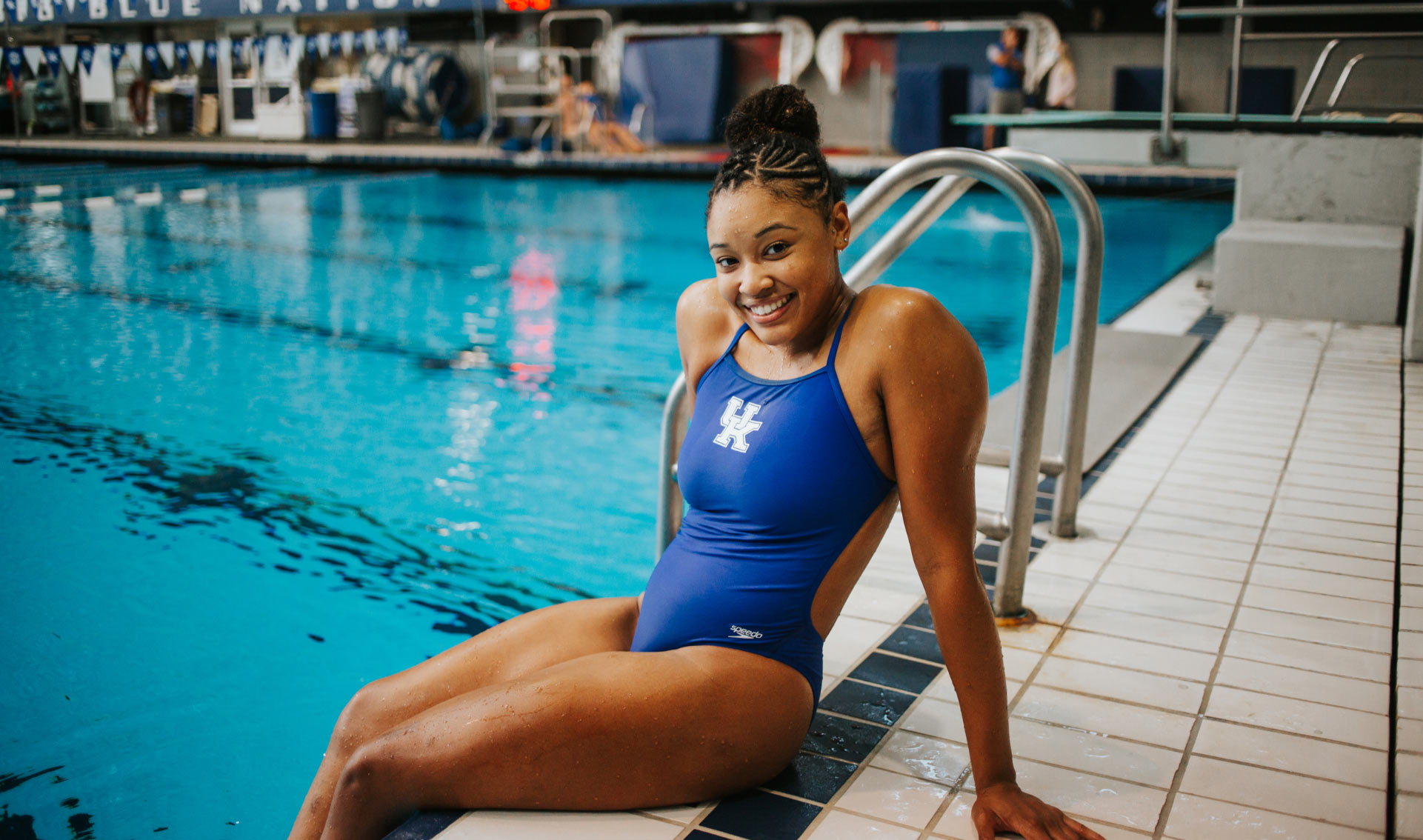 “I've learned to be open and depend on people when they offer their help, just like I love helping and motivating people.”