“My index finger would just go numb. I would just kind of shake it off and be like, ‘Gosh, my hand keeps on going to sleep.’ A few weeks later, they were purple. It never left. From the time they turned purple, they never turned back.” 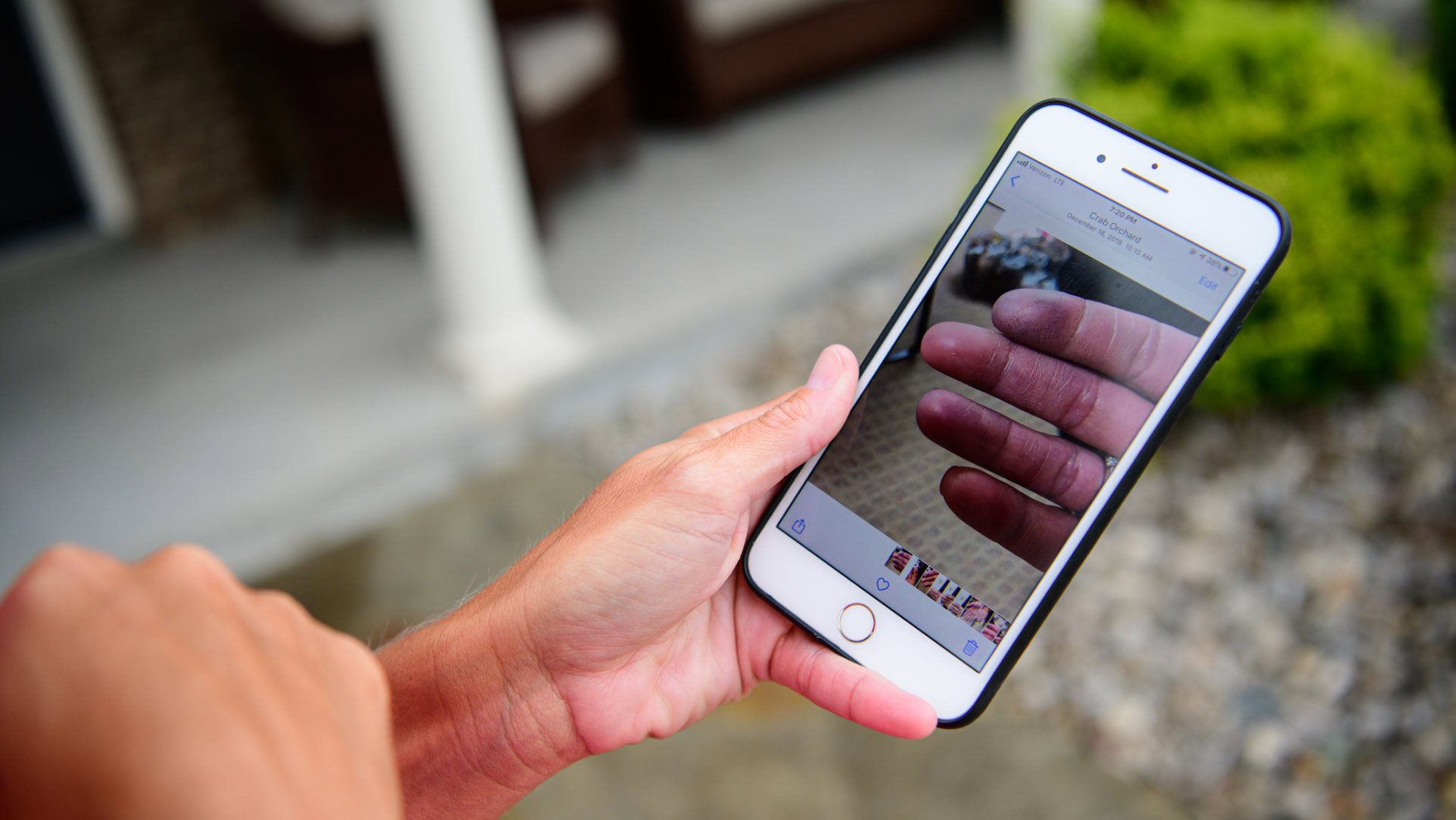 “I looked down and my first three fingers were purple. I was like, ‘Gosh, does this look right to you?’”

In November of 2019, Angela King began to experience numbness and frostbite-like pain in her index finger. By mid-December, the first three fingers on her right hand had turned purple. After consulting with her co-workers, family and nurse friends, Angela began to worry more when the color and numbness worsened throughout the holidays and into the new year.

The overall consensus at the time was that her symptoms pointed to Raynaud’s Syndrome, a blood vessel disorder which causes extremities like fingers to turn blue when a patient is cold or stressed. But Angela still wasn’t convinced. 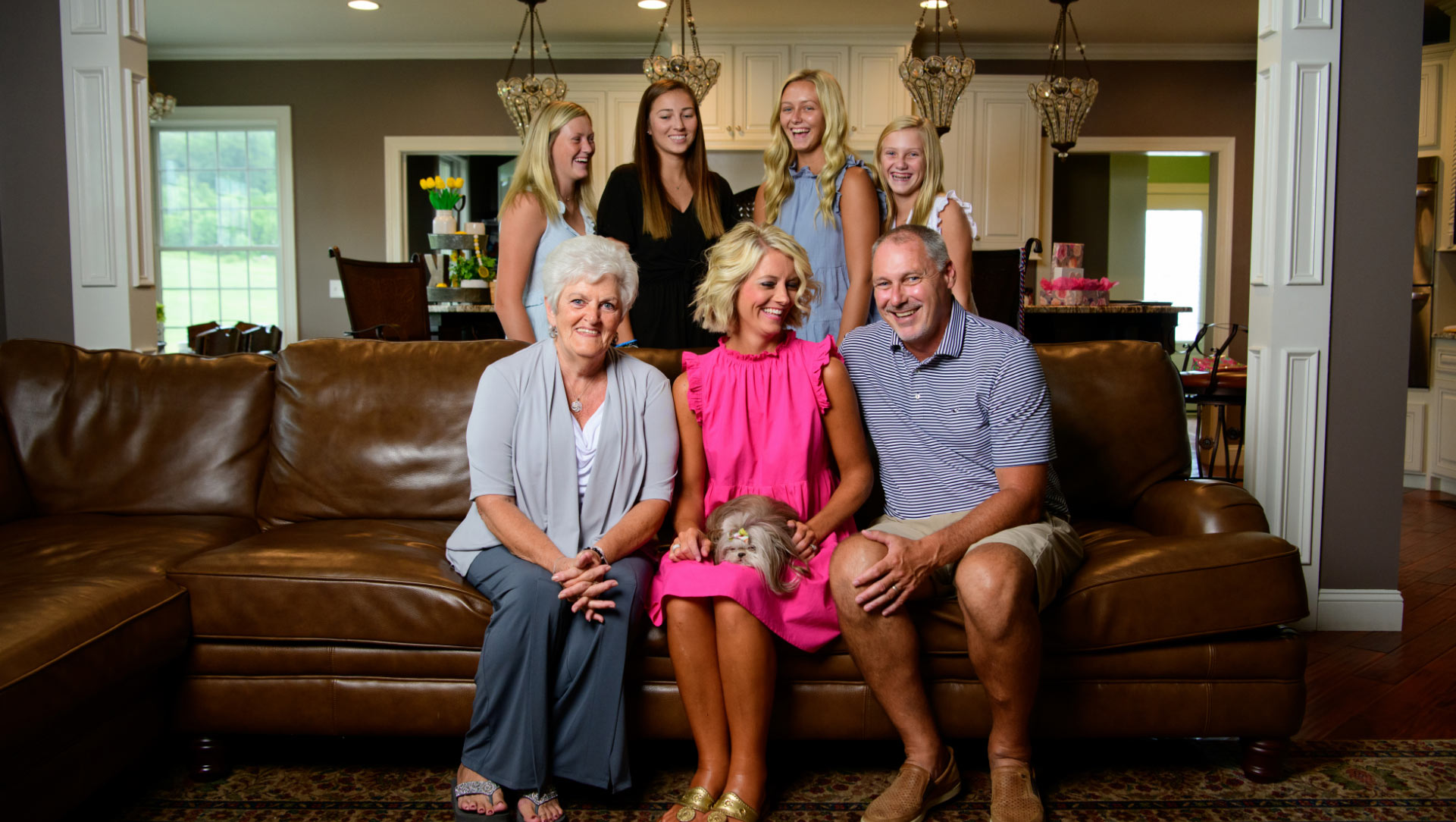 “Dr. Drake said, ‘You have two hours to go home, get what you need, see your daughters, and get back to the hospital.’”

“My mother was like, ‘Just go see my doctor and get a second opinion.’ I went by myself, I was like ‘I’m going to be fine, they’re just going to look at me, he’s probably going to run some more tests and I’ll be back at work this afternoon.’ He did the whole examination. He looked at me and he said, ‘I think you’re going to lose your hand. I have already talked to UK HealthCare, the emergency room is waiting on you. You need to leave here and go straight over there.’”

Shocked and alarmed by the specialist’s urgency, Angela immediately went to UK HealthCare’s Albert B. Chandler Emergency Department. “I got there and they start sending me through all of these tests. They start the blood work, they do an EKG, and so on. That night alone, I saw about ten different doctors.” 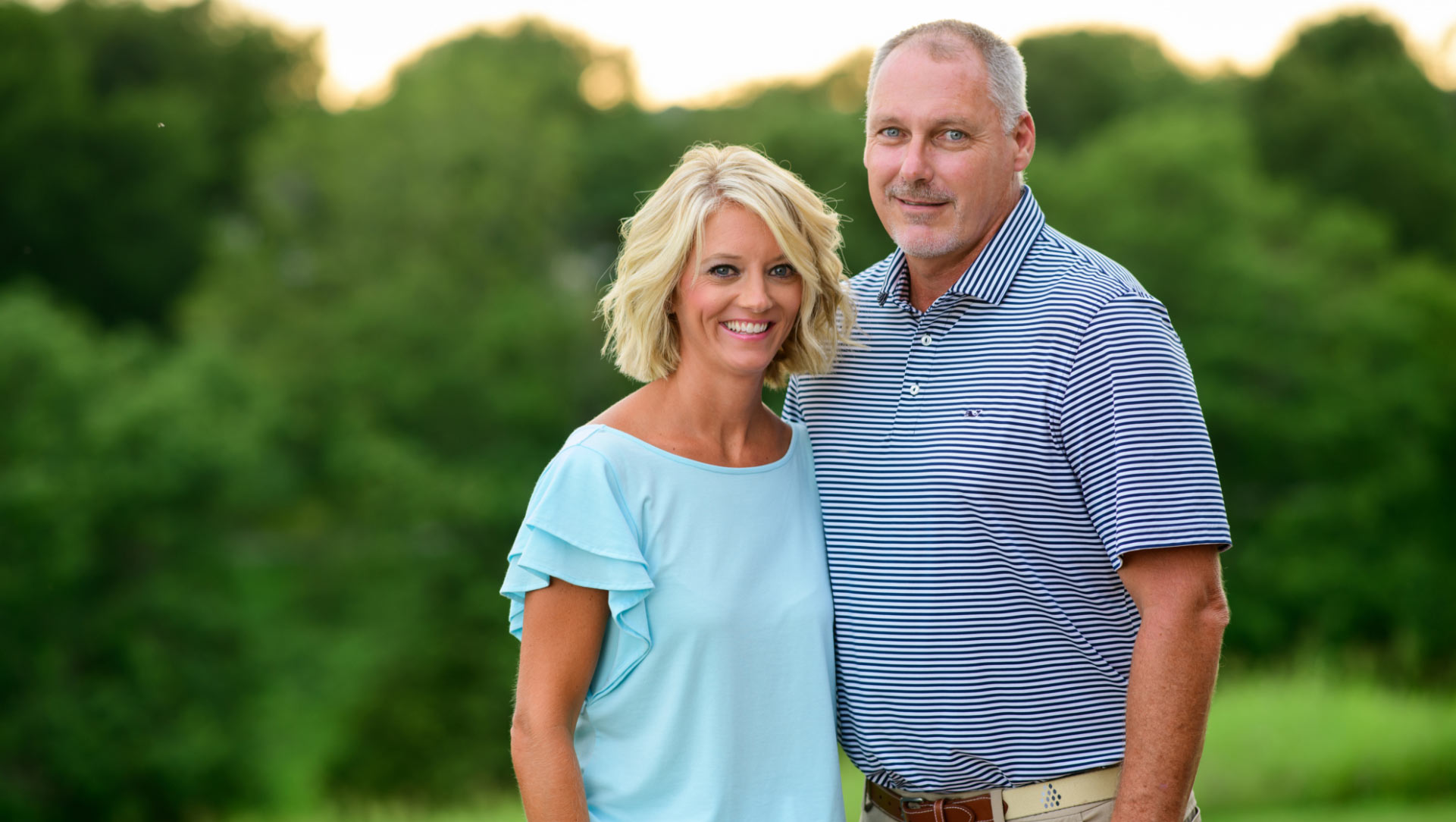 Angela’s husband was by her side every step of the way, supporting her and taking care of their daughters.

Angela and her husband returned to UK HealthCare the next morning, hoping for answers from the tests done the night before. They were soon introduced to Dr. David Drake, a plastic surgeon and hand specialist, who was determined to find out what was happening to Angela.

“I met Dr. Drake, and he said to me, ‘I’m going to admit you to the hospital. This is your only shot at saving your fingers. There is something going on. You are not getting blood flow, you’ve not had blood flow for 40-some days. If I don’t get you admitted to the hospital, then I can’t run the test as fast.’” 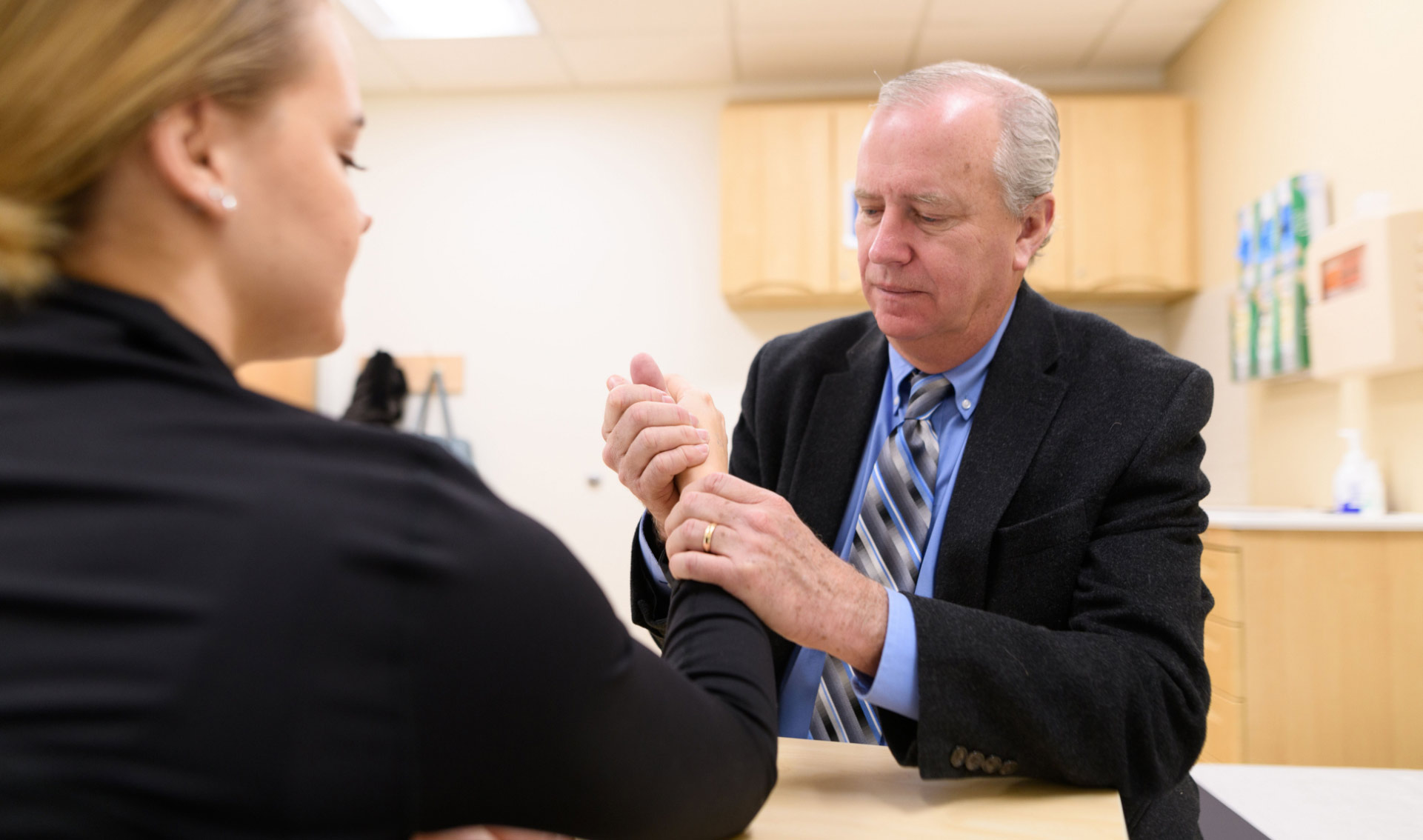 “She landed in the right place at the right time. Then I found the right people to help us,” Dr. Drake said.

After more tests, an echocardiogram of her heart, an arteriogram of her arteries, and consults with other doctors, Dr. Drake found what he had been looking for—an answer. “They shot her arteriogram,” Dr. Drake recalled. “In her fingers, she had these little blunt cutoffs. That’s an indication that there’s been a clot. I felt strongly that was the problem, we just didn’t know where the source was.” 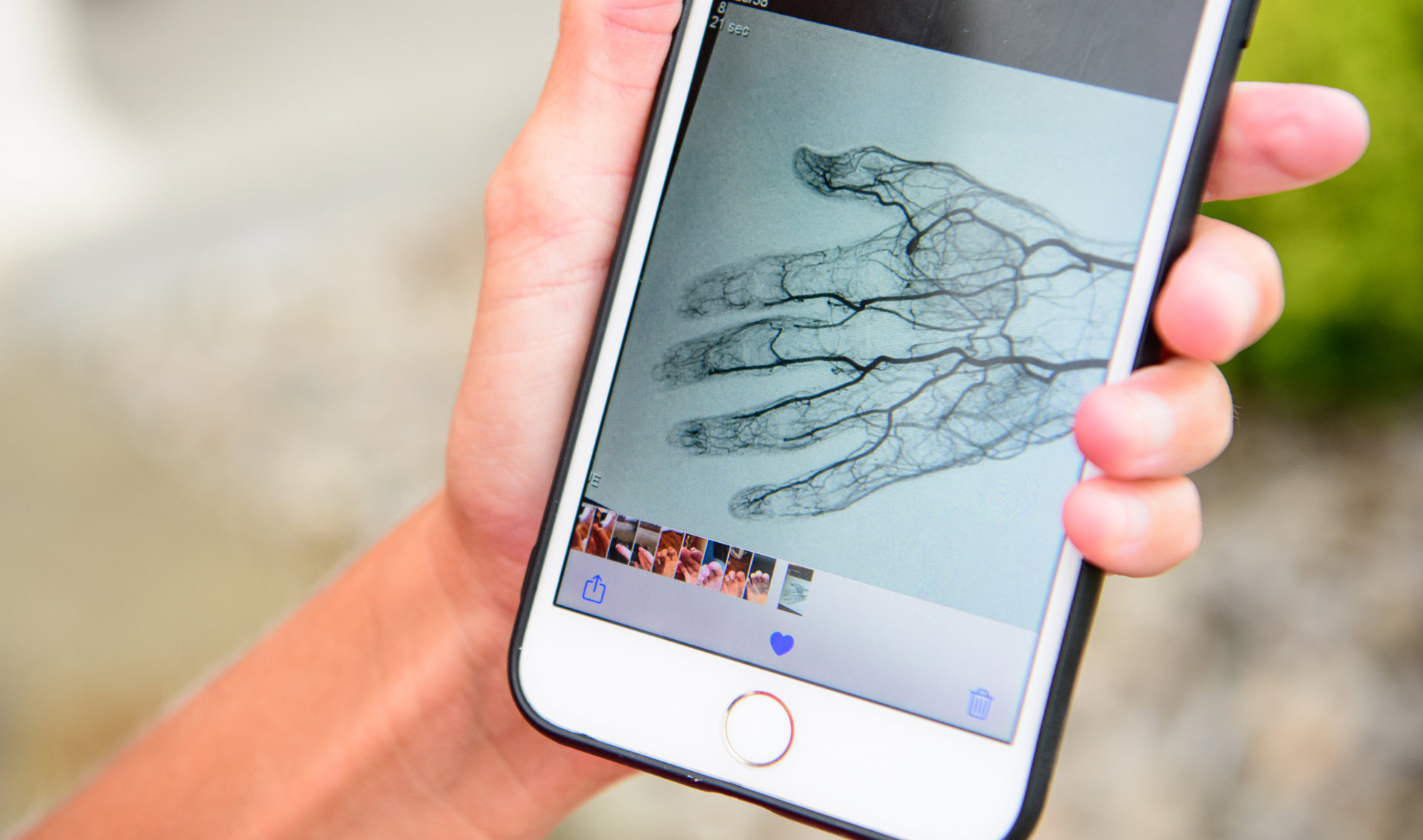 Angela’s arteriogram shows where the blood flow in her fingers abruptly cut off. That scan revealed the true source of her issues.

“I was walking down the hall and I saw Dr. Eric Endean, a vascular surgeon, and I had a picture on my phone. I said, ‘Eric, this is embolic. This is a clot.’ He said, ‘Yeah, you need to call Dr. Gurley.’ Dr. Gurley is an interventional cardiologist. As soon as I hunted him down, as soon as I found him and showed him that, he said, ‘She has a patent ductus foramen ovale. I guarantee you, that’s what you have.’” 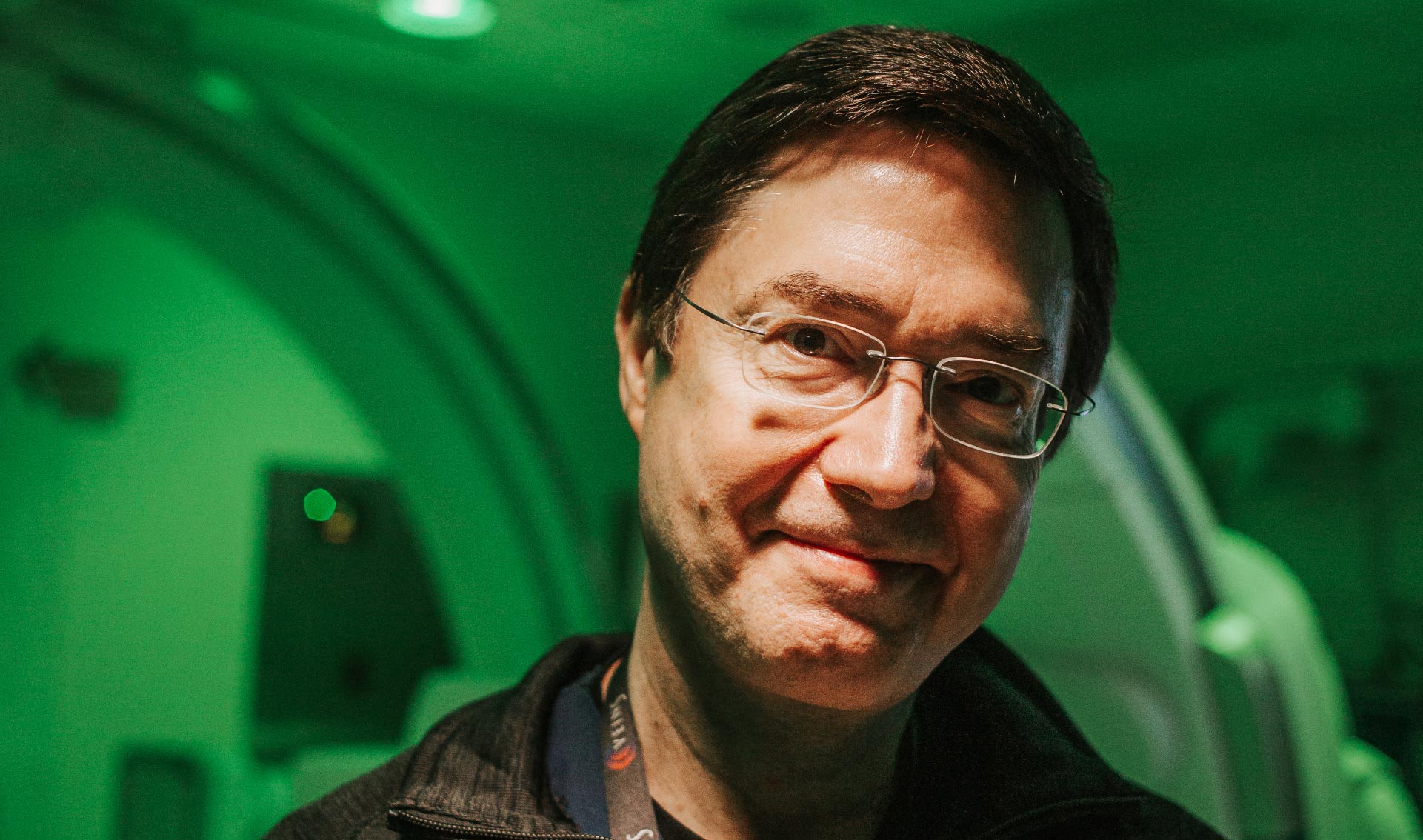 “He said to us, ‘You have a hole in your heart,’” Angela said. “‘You were born with it. Everybody’s born with a hole in their heart because that is what connects us to our mother with the umbilical cord, but yours did not close. In fact, we think it’s going to open more. The hole in your heart is letting blood clots out. Now, you must be the luckiest person alive because these should have shot to your brain and caused a stroke. If you do not have this surgery, we may not have this conversation again if one goes to your brain.’” 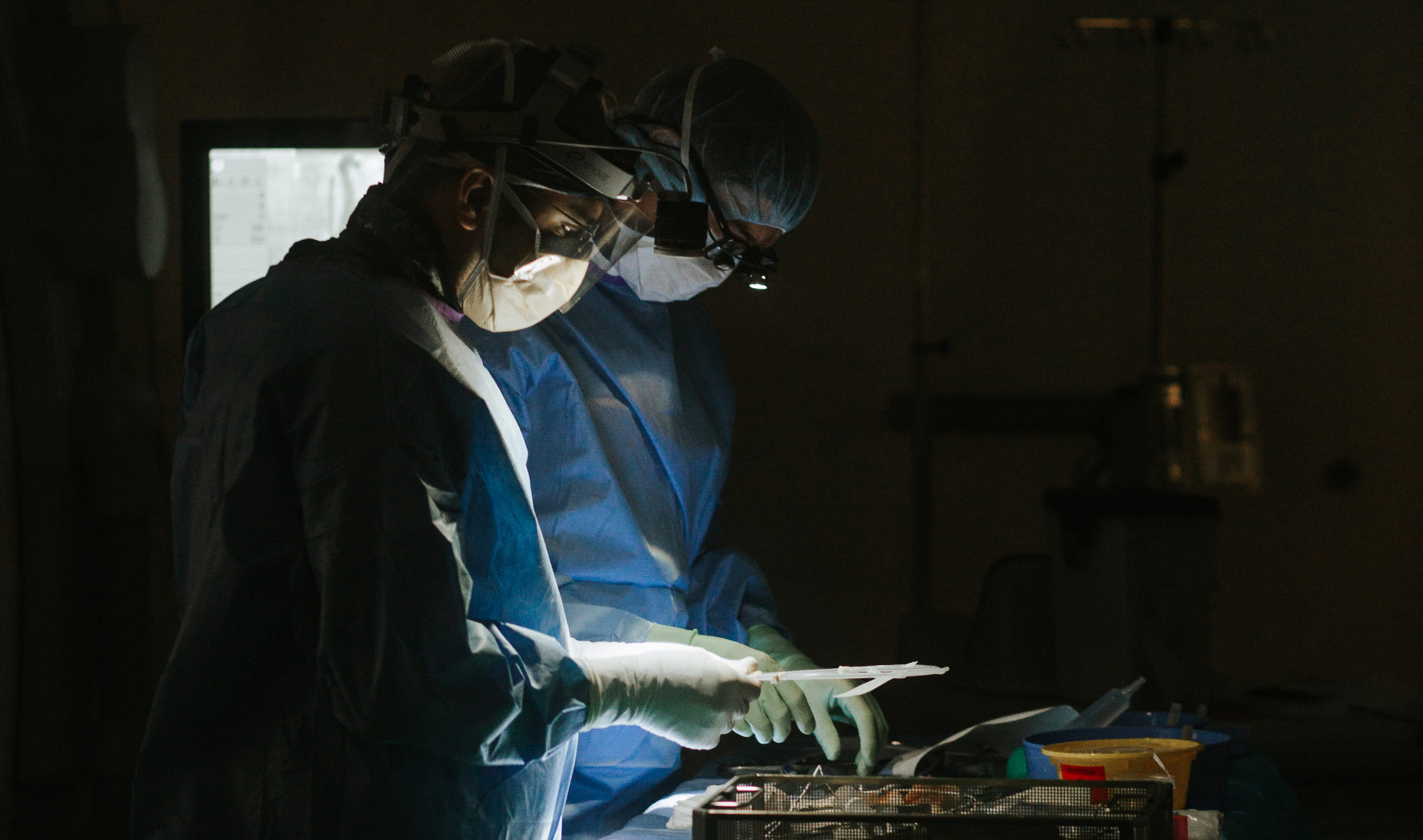 Once the problem was finally identified, Dr. John Gurley was able to solve it for good, performing a procedure to plug the hole in Angela’s heart that was allowing blood clots to escape and travel down to her hands. While her hand continues to recover, the outcome could have been much worse. The fact that a diverse team of doctors was able to find a solution to Angela’s mystery is a testament to UK HealthCare’s interdisciplinary approach. 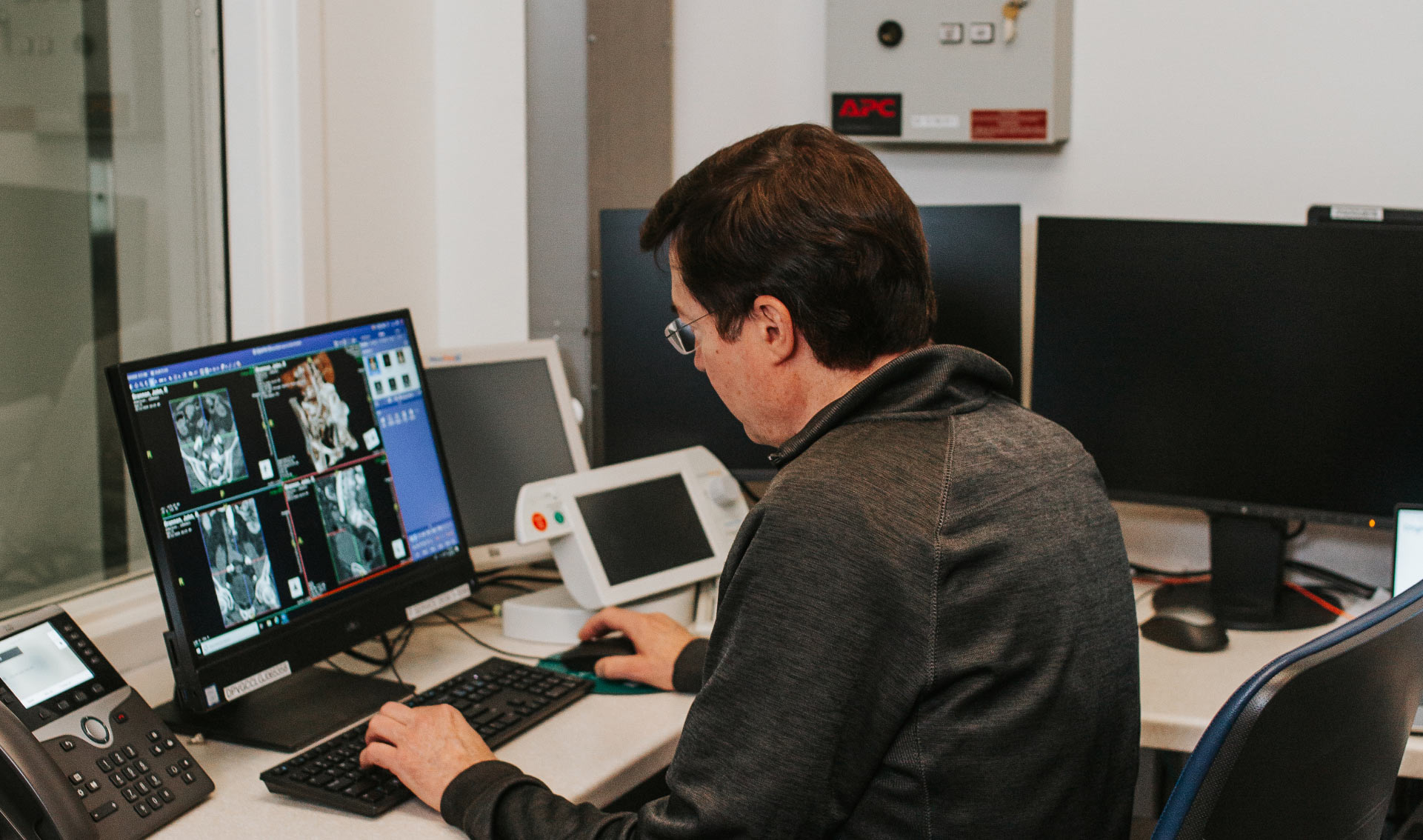 “Dr. Gurley knew exactly what the problem was, and fixed it,” Dr. Drake said.

“I recognized it was a vascular problem,” Dr. Drake said. “The acute interventional pain service, they placed the catheters. Our arteriographer, she shot the right shot. Then Dr. Gurley knew exactly what the problem was and fixed it. It’s that kind of interdisciplinary collaboration that you don’t get in many places. When we work together, the results can be greater than the sum of the parts for sure.” 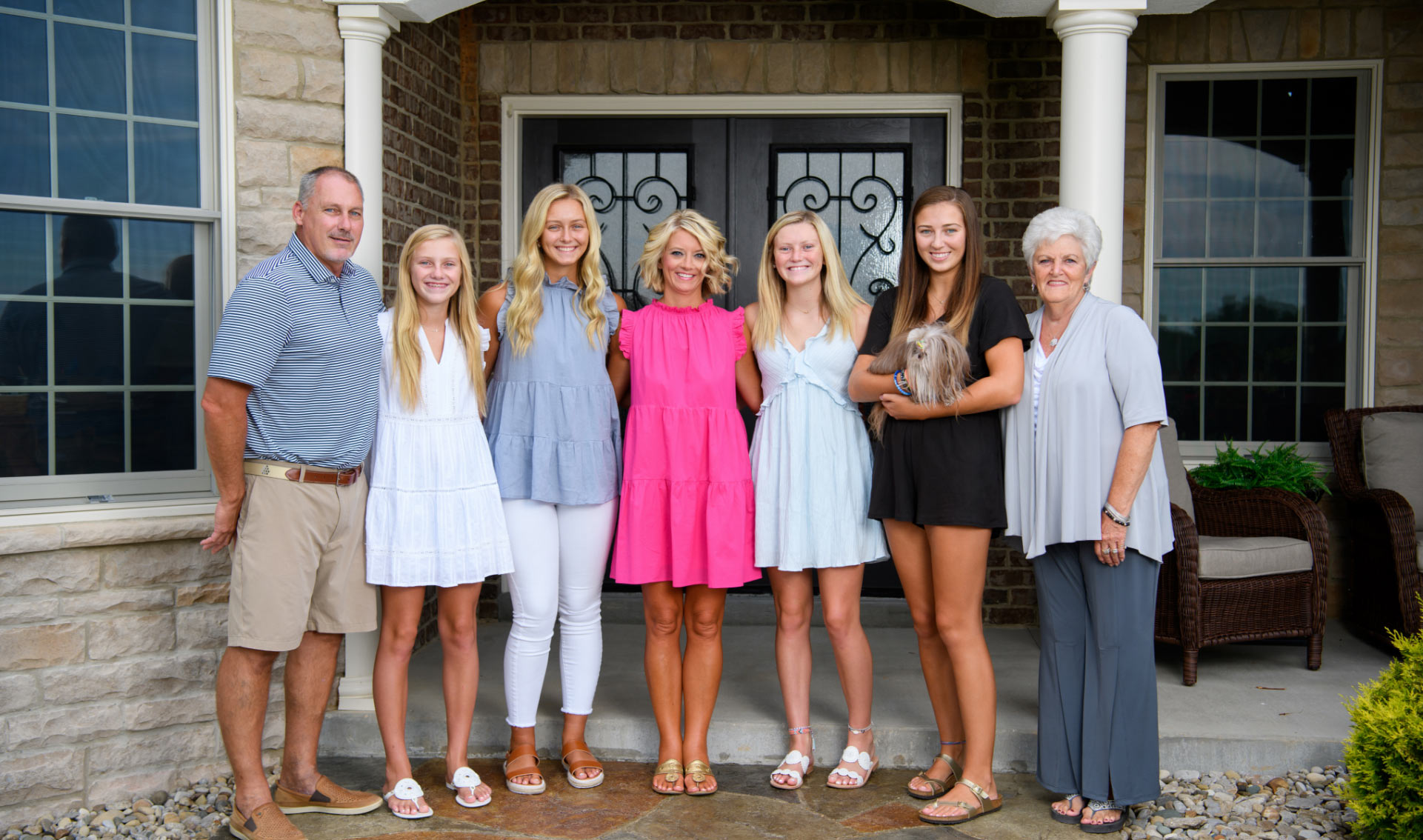 “I’m not lucky. I just have a really big God. I have four daughters and He needs me around to take care of them.”

“I have nothing but praise for everybody at UK HealthCare. They were phenomenal. It was the best care. I think God led me to UK HealthCare and I don’t think anybody else in our state could have found what they found. They just kept digging, they didn’t stop. The first doctor I went to, if I would have just went to him and he said, ‘Oh you have Raynaud’s, stay warm.’ I don’t even know if I would be here today.” 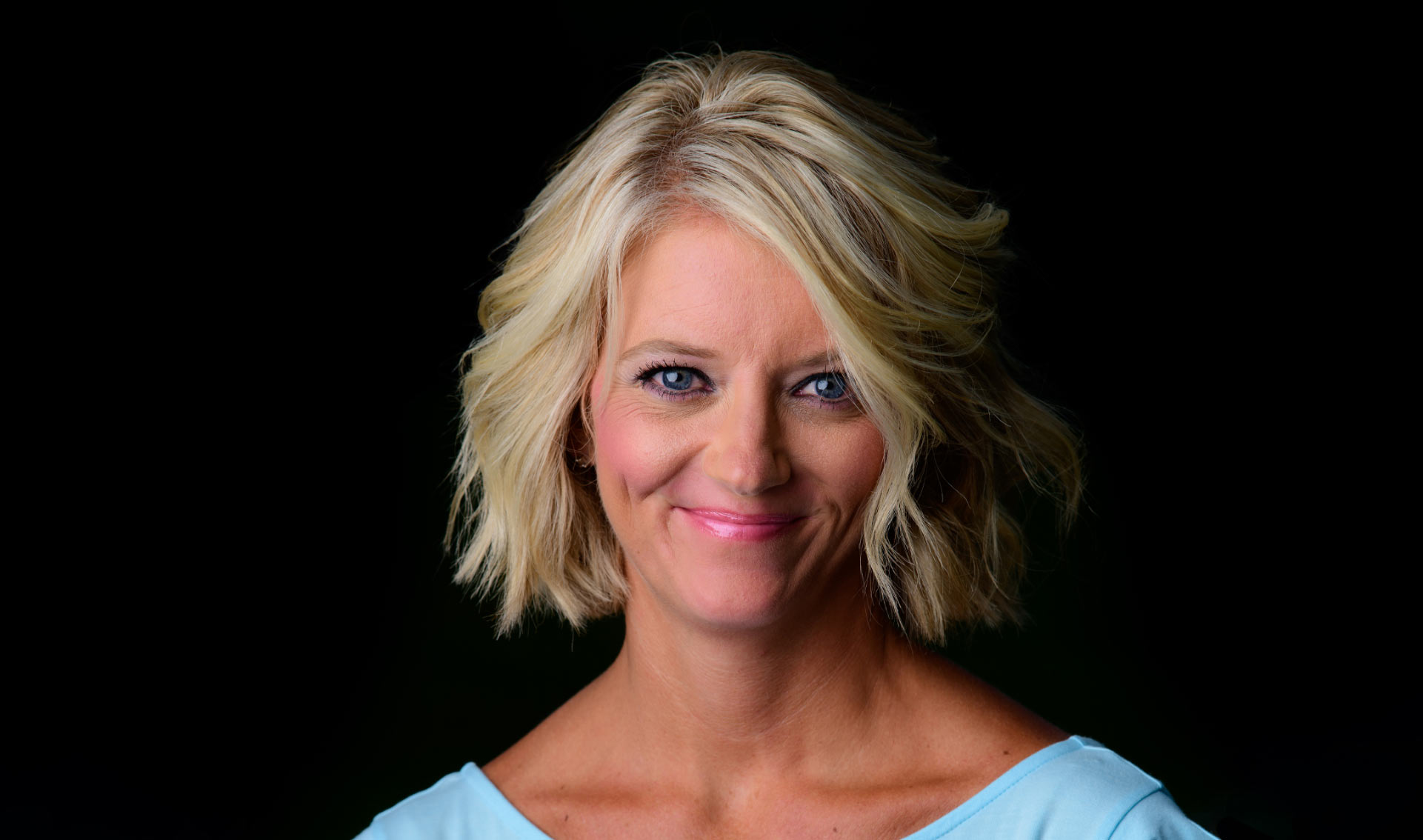 Today, Angela is healthy and healed—and thankful for UK HealthCare’s dedication to finding answers to cases like hers.