“Thank God for a kidney stone.”

“I’m probably the only person who says ‘thank God for a kidney stone,’ because it discovered my kidney cancer before it metastasized.” 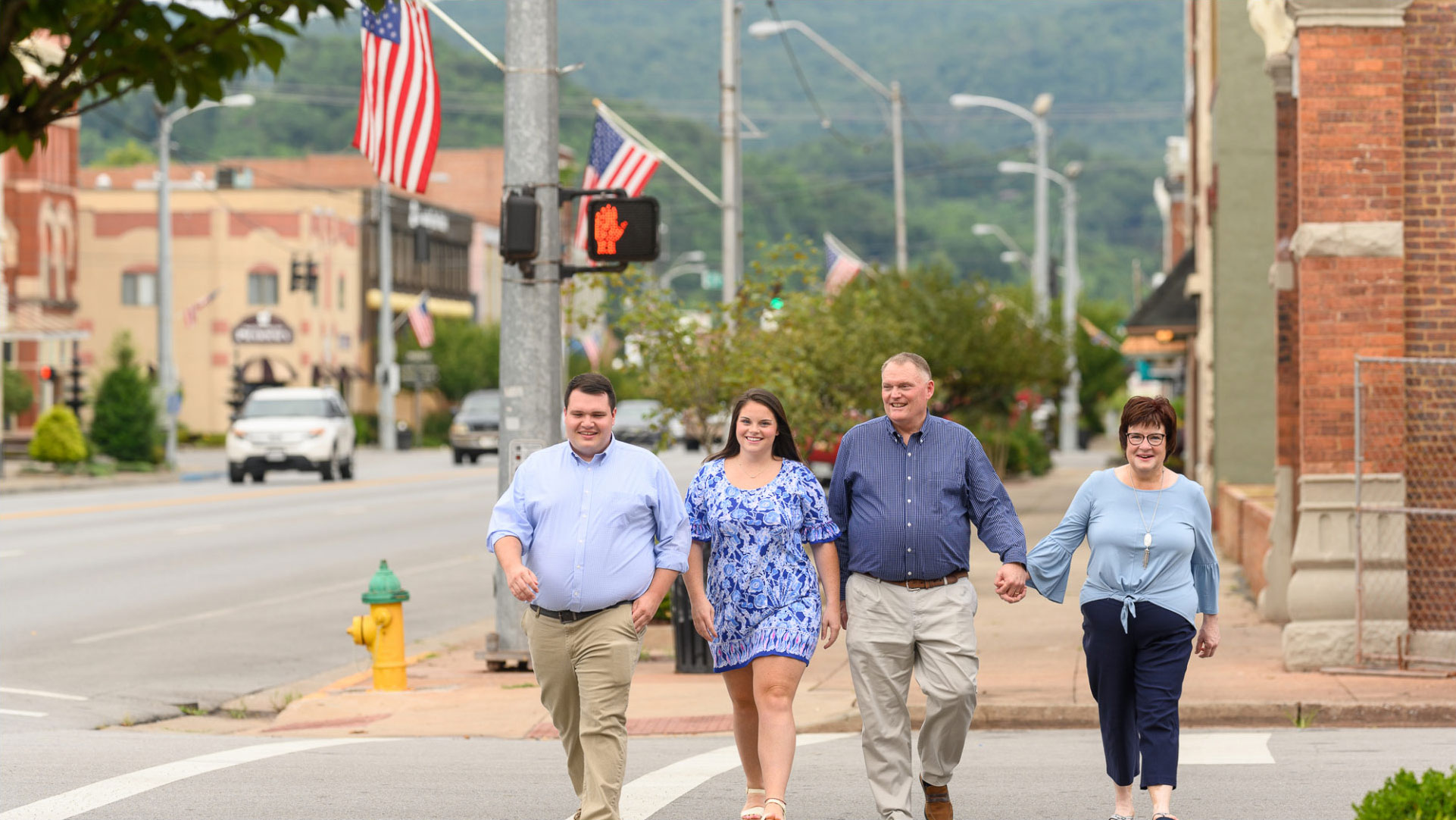 Michael, his wife, Diane, and their children, Benjamin and Sarah, take a walk in downtown Middlesboro.

On February 3rd, 2019, Michael Slusher became extremely sick at work. After attempting to drive home despite the pain, he ultimately decided to turn around and drive back to Middlesboro Appalachian Regional HealthCare—his hometown hospital, and where he works as the Community Chief Executive Officer. 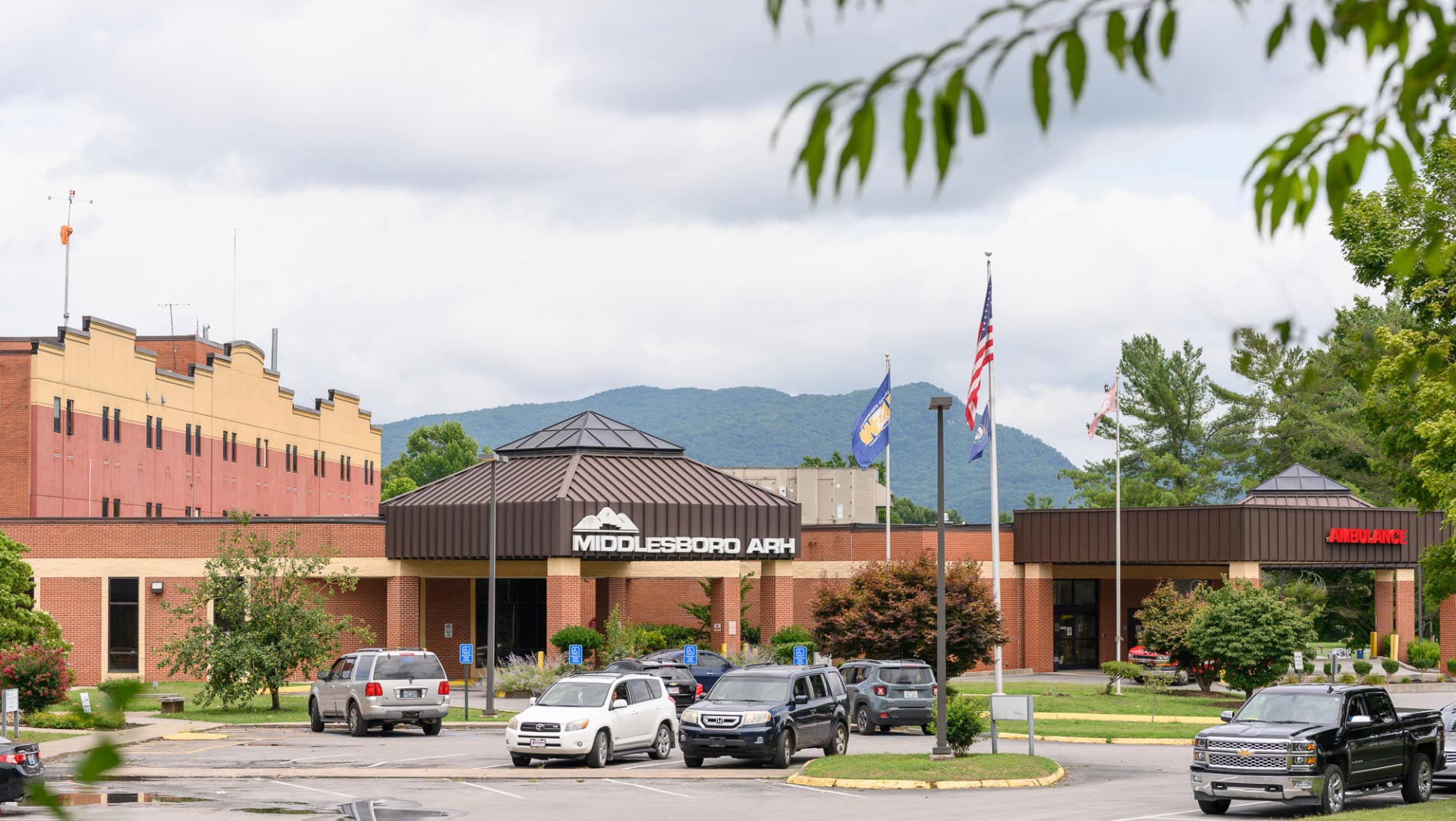 Middlesboro ARH was the first hospital opened in the Appalachian region, more than fifty years ago.

After originally thinking it could be his gallbladder, the emergency room team found that Michael had stones in both kidneys—as well as a mass on his left kidney. Michael was referred back to his primary care physician who ordered additional scans, which found the mass to be malignant. Michael had kidney cancer. 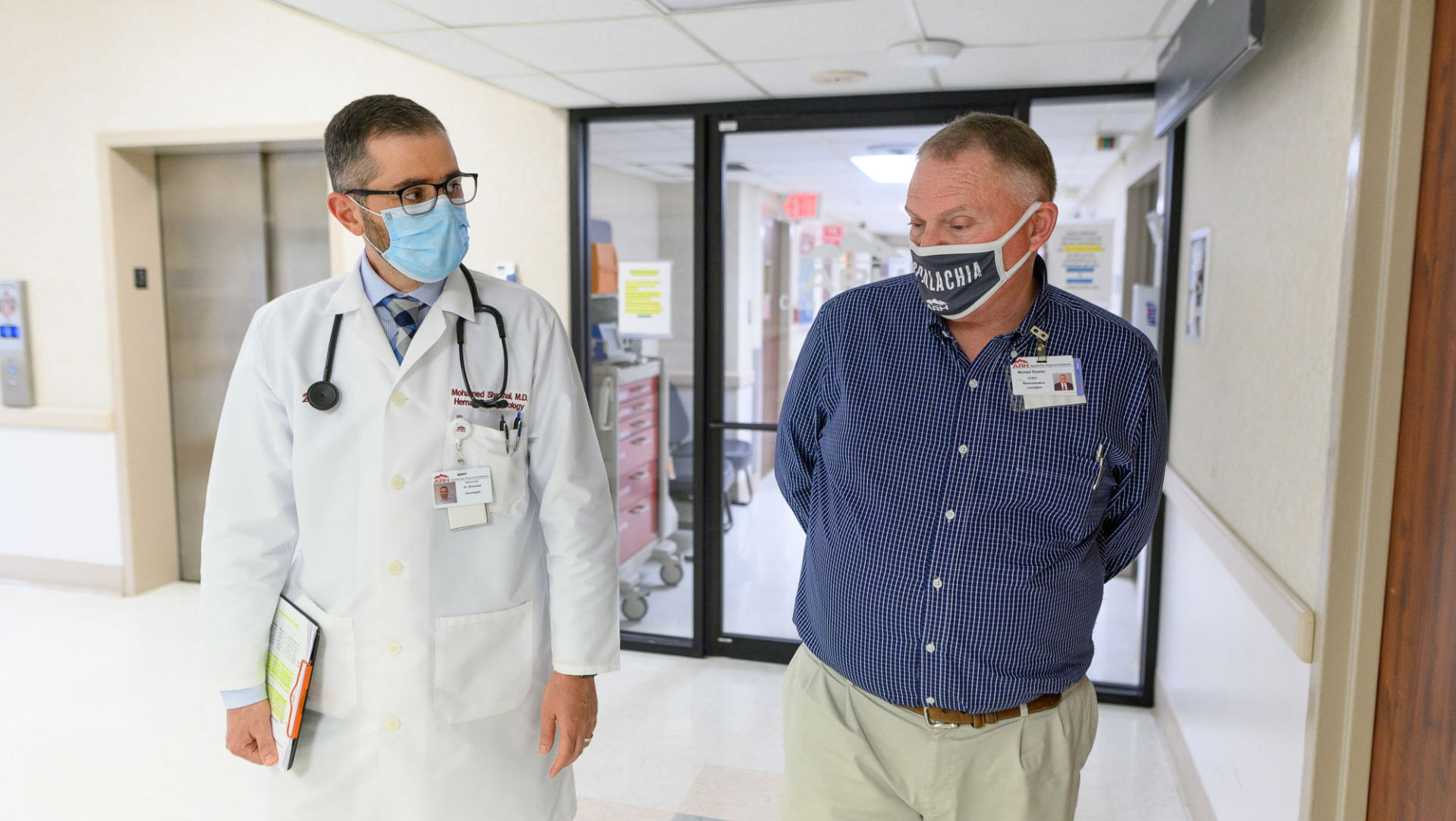 Michael knew he wanted a minimally-invasive laparoscopic procedure if possible: a surgery that involves much smaller incisions and a shorter recovery time. His doctors gave him two hospital options, and Michael chose UK HealthCare’s Markey Cancer Center—one of the top-ranked cancer centers in the country. Thanks to Middlesboro ARH’s affiliation with Markey Cancer Center, Michael was quickly referred to Dr. Andrew James, a surgeon who specializes in urologic oncology. 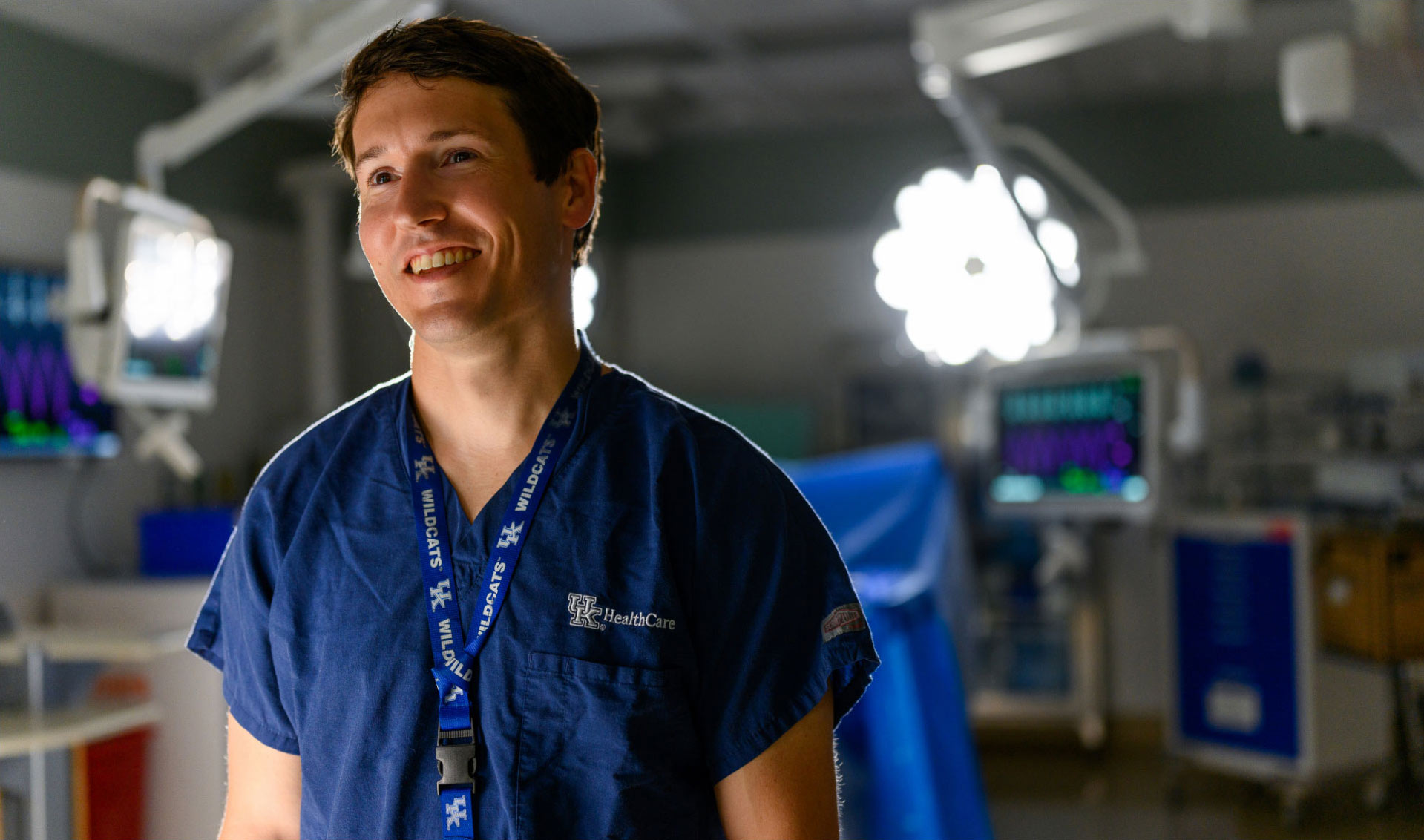 Dr. Andrew James is the Chief of the Division of Urologic Oncology at UK HealthCare’s Markey Cancer Center.

“We discussed my options thoroughly, and we went ahead and had the tumor removed on March 10th,” said Michael. “I had a really excellent experience. He did an amazing job with the surgery, and I was back to work within three weeks. I was really impressed by the urology residents as well as the anesthesia staff, they were top notch. They made me feel very comfortable. They were very easy to talk to.” 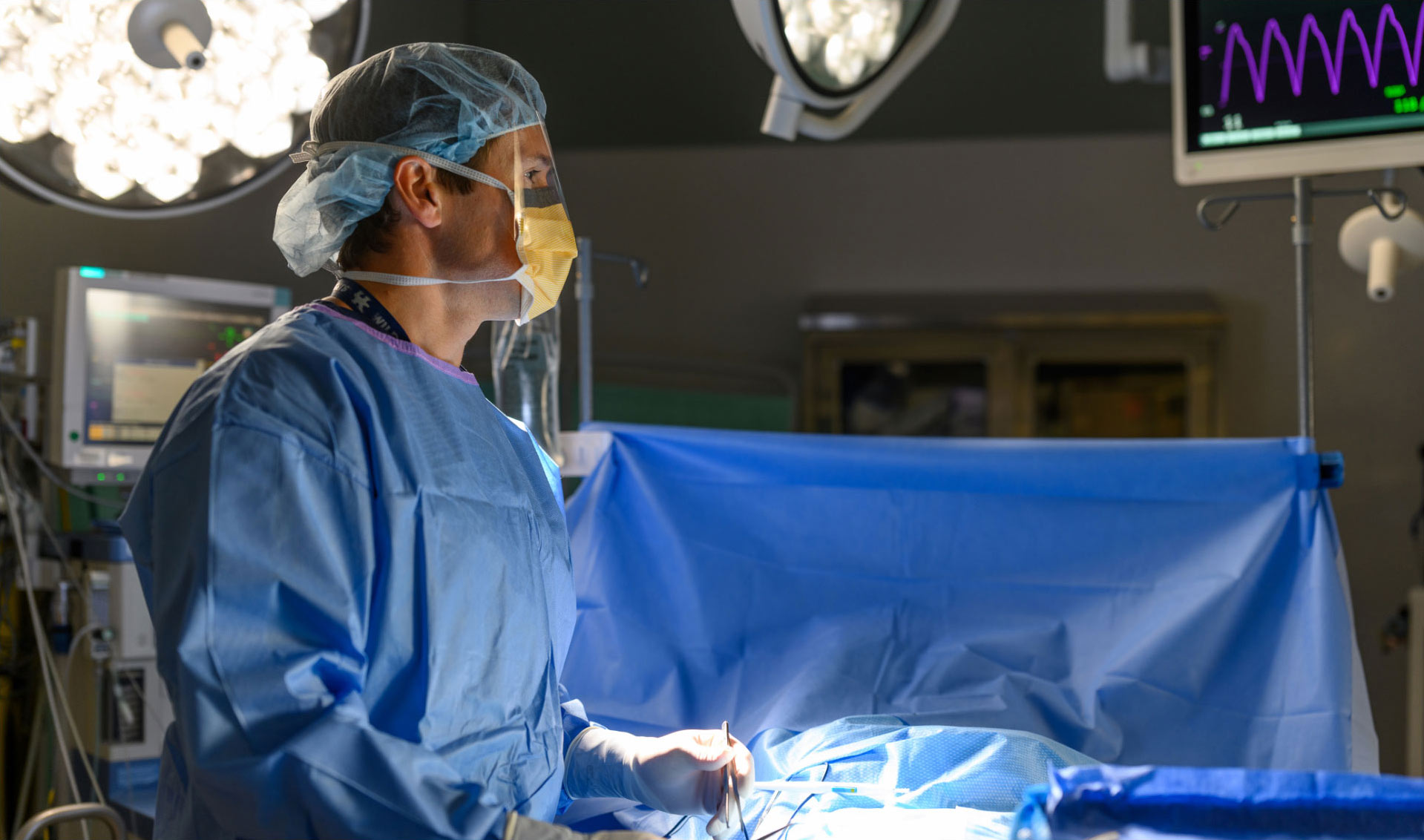 Michael’s surgery involved the removal of his entire left kidney, including the cancerous tumor. By opting for the laparoscopic procedure at UK HealthCare, Michael was able to spend only a day in recovery before he could return home to Middlesboro. His post-surgery care continued with Dr. James through UK TeleCare calls. Fortunately, the outlook for Michael is an optimistic one. 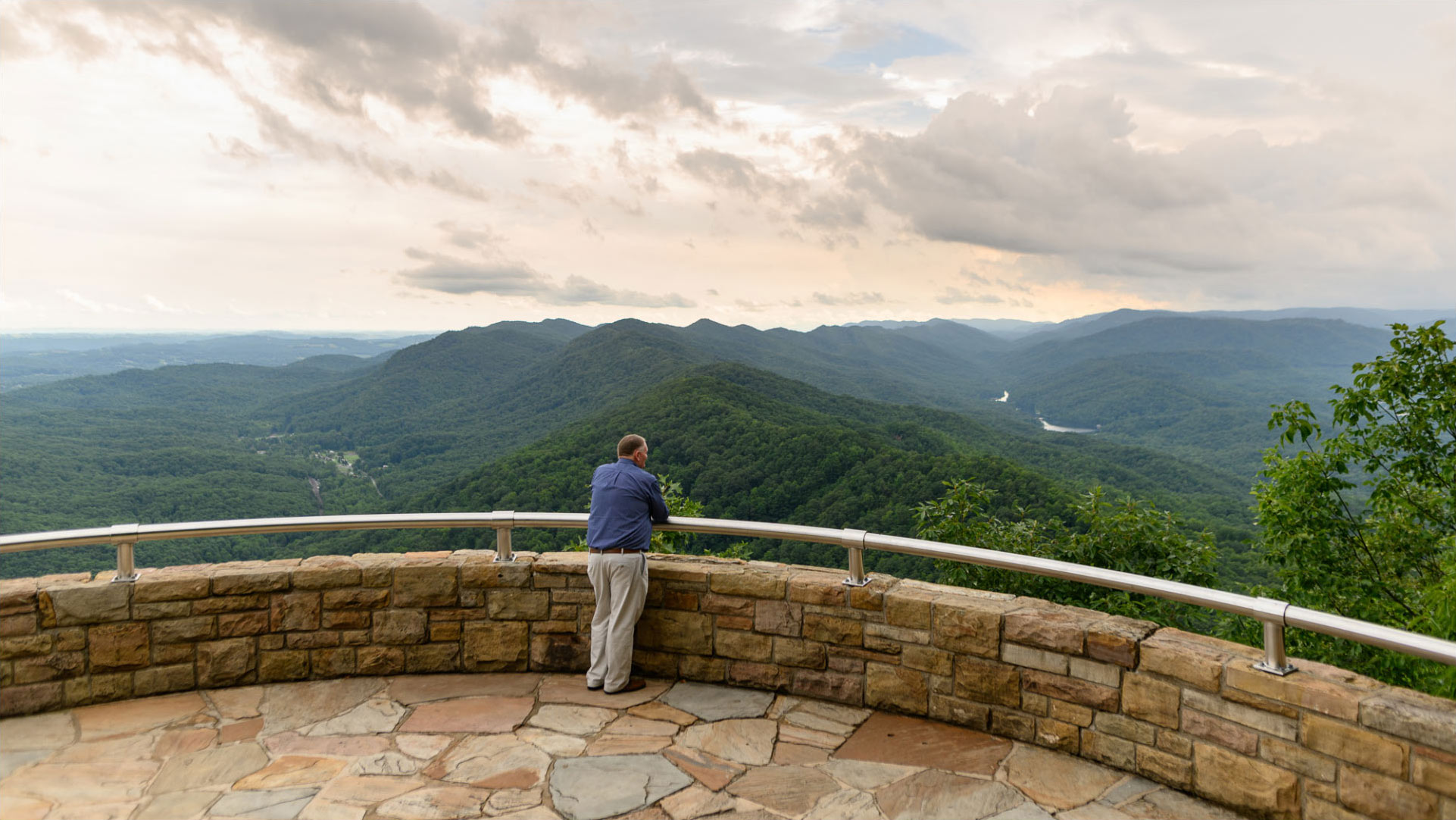 “If you put your finger on the map where Kentucky, Tennessee, and Virginia converge, that's Middlesboro,” Michael said.

“He’s doing great. His CAT scans didn’t show any recurrent tumor. We’ll obviously still keep an eye on things, but right now, he’s in a very good spot,” said Dr. James. He noted that finding kidney cancer the way Michael did isn’t uncommon—but it is lucky. “We actually see a lot of patients with kidney cancer, and most cases are asymptomatic and are found incidentally. But for all comers, the five-year survival rate is about 75%, so one out of four patients will die from it. It can be a very aggressive cancer.” 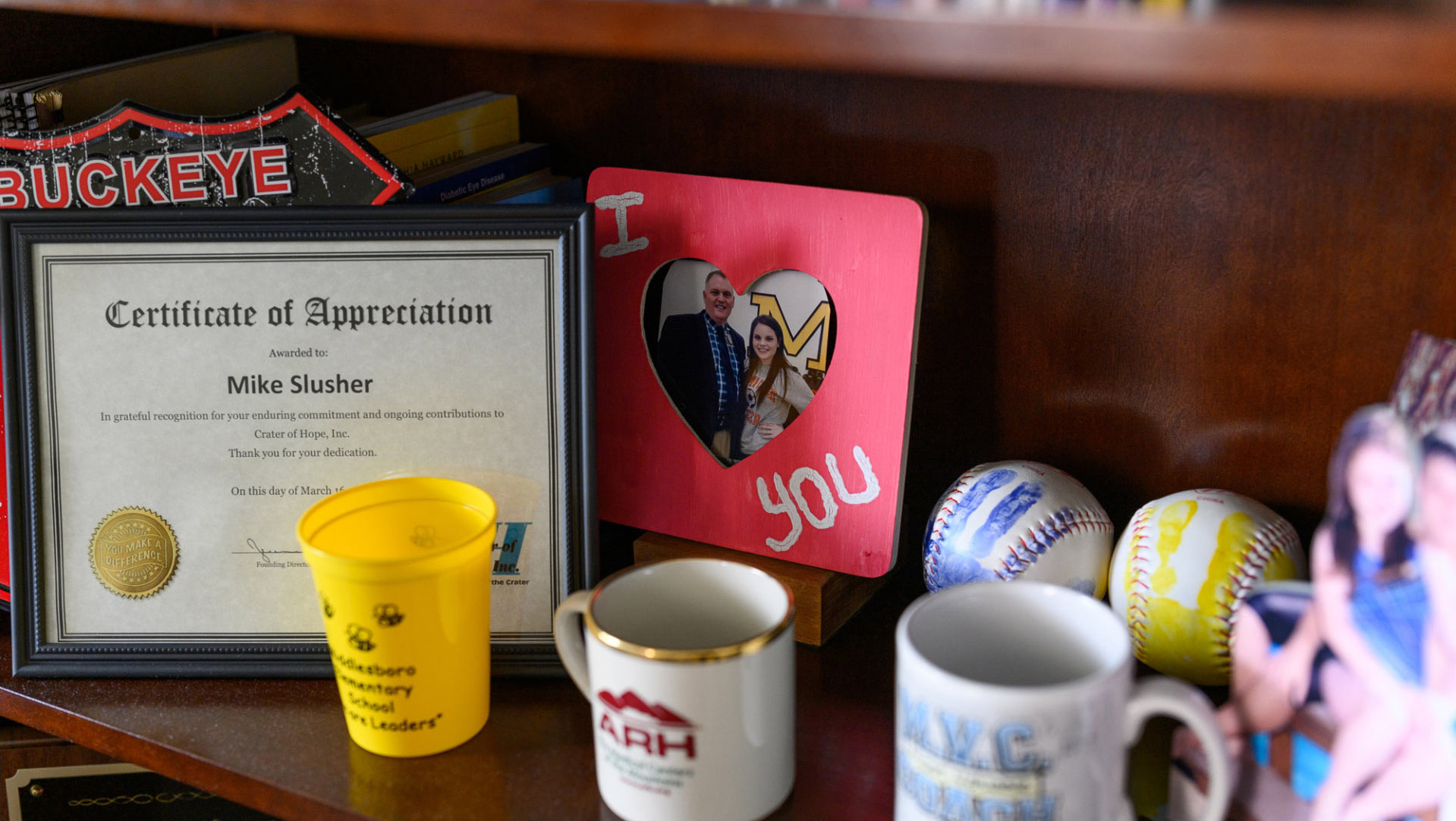 In Michael’s office, there are many mementos of his family—the most important thing to him.

“I recognize how blessed I was, first, to get the kidney stone to diagnose the cancer,” Michael said. “Secondly, to get referred up to Markey Cancer Center and get an outstanding surgeon like Dr. James. 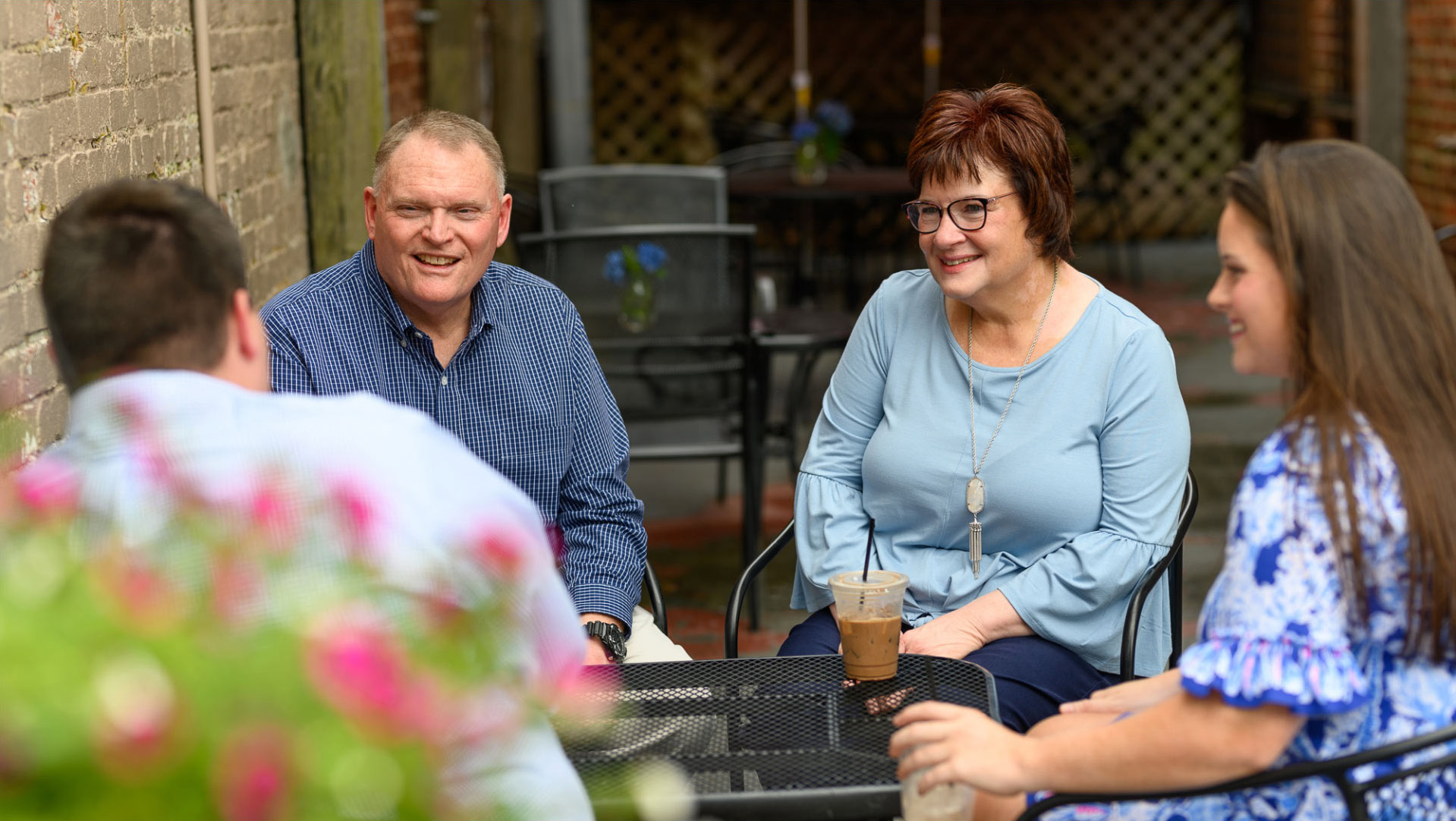 Michael’s family was always on the forefront of his mind throughout his experience with cancer.

The decision was made last year for ARH to become a Markey Cancer Center affiliate and develop those relationships, so I got to know people there. I would have still selected UK HealthCare over my other option, but having those relationships certainly made it a more comfortable experience. I didn’t approach it with as much anxiety or fear.” 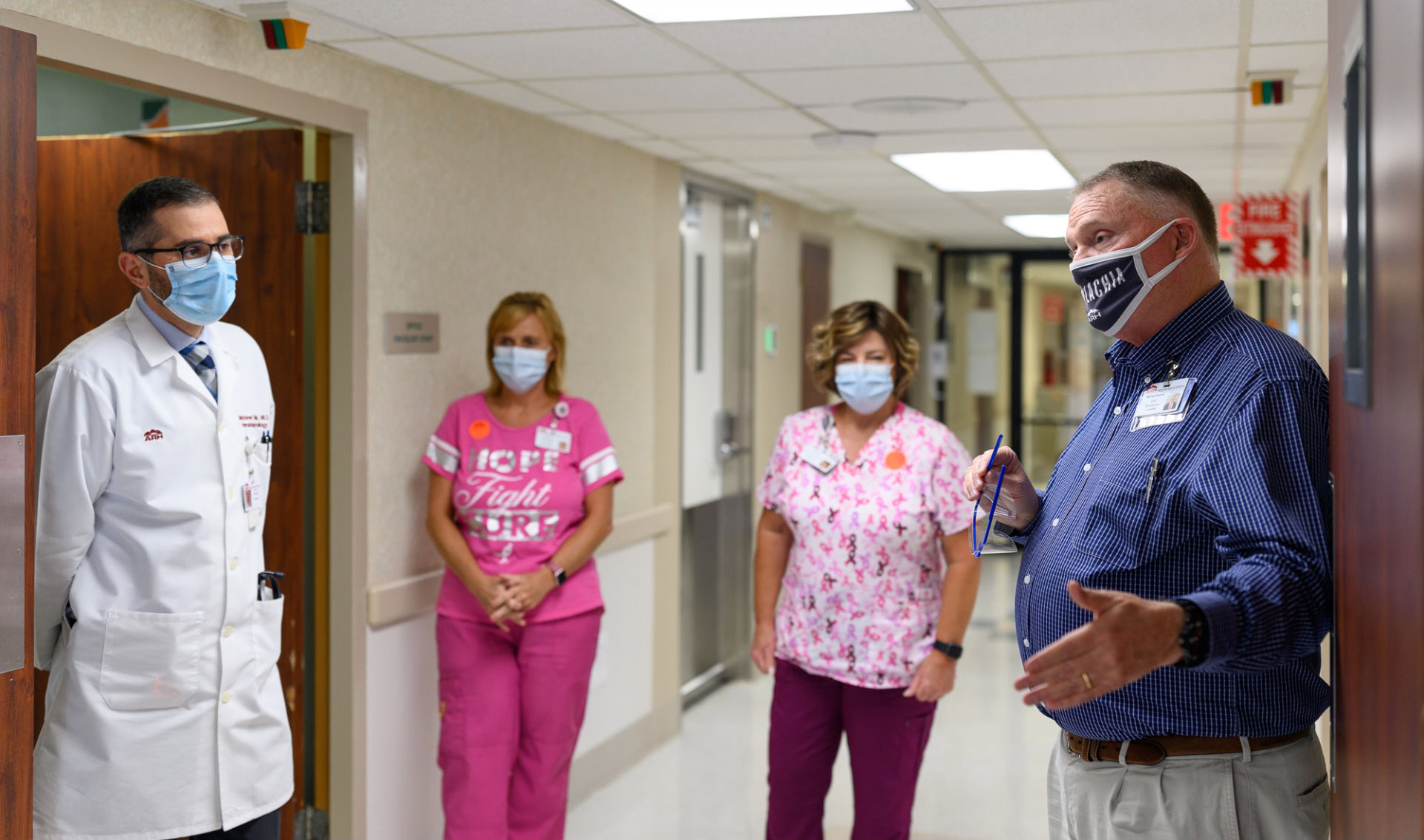 “I’ve been the CEO here for eleven years. It’s by far the best job I’ve ever had.”

Through Michael’s experience as a patient at UK HealthCare, he has seen firsthand the power of the strong relationship between Middlesboro ARH and UK HealthCare—which ultimately may have saved his life. 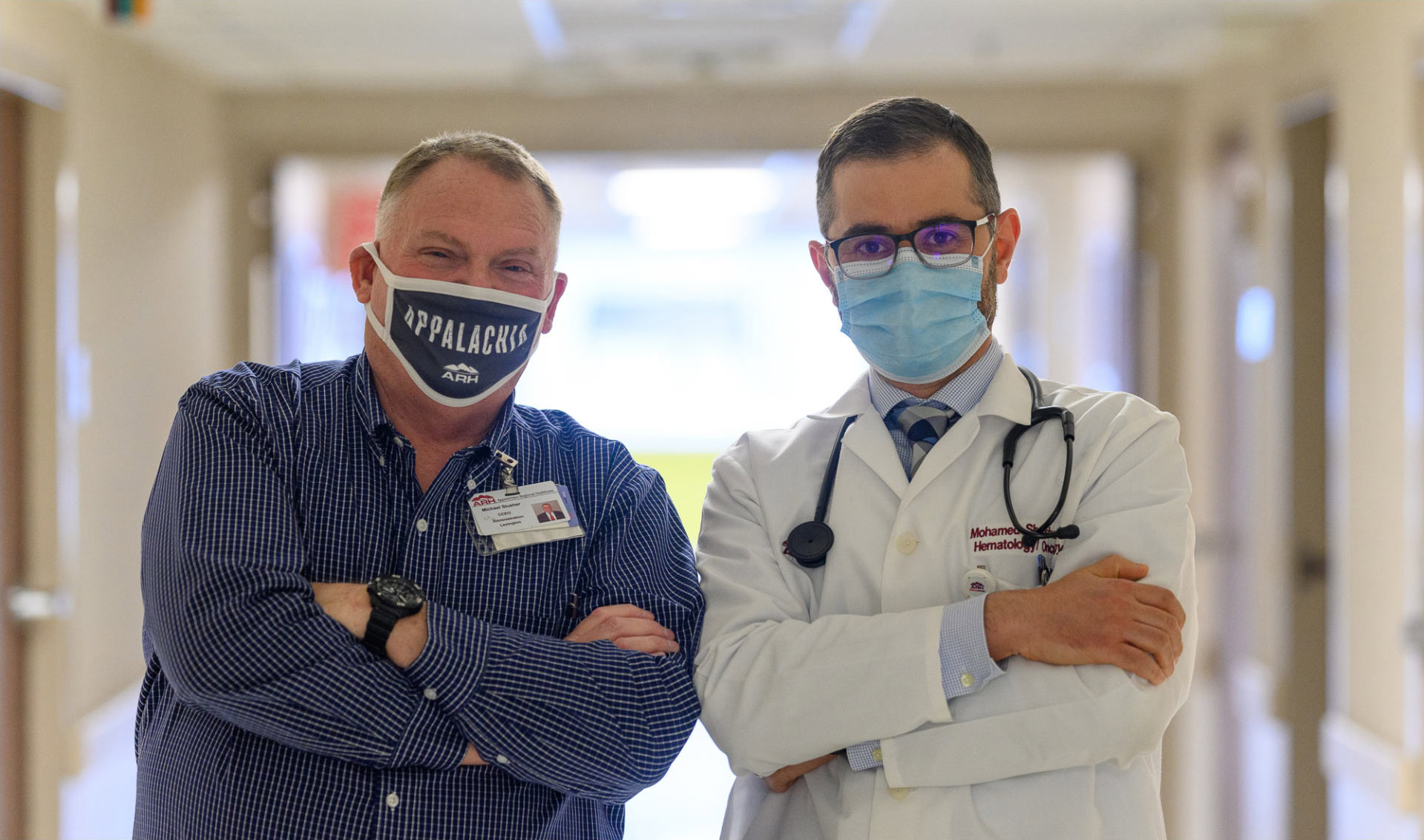 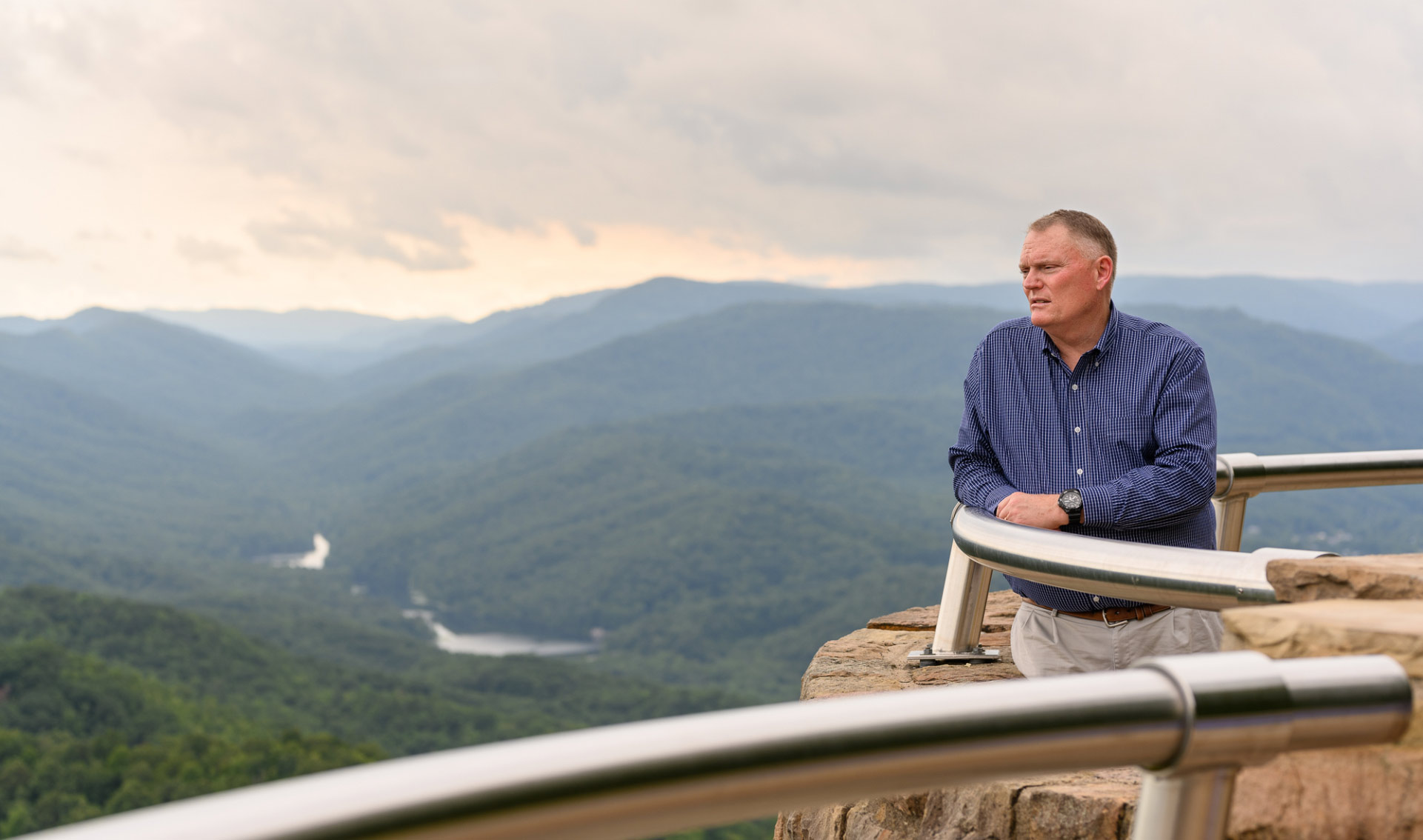 Michael is relieved and grateful to continue living his life and leading ARH Middlesboro forward.

“I’m not just limited to what I can do in the operating room.”Cancer