“Over the course of 50 years as an artist, craftsman and home rebuilder, I was somewhat cavalier about the abuse I was delivering to my hands. Though I was concerned, I’d never broken any bones, so just muscled through. But six or seven years ago, I hit my hand with a hammer. With that and all the other abuses, the condition of my hands began to become considerably more dire. A couple of years later my thumb began to malform and it really started hurting.” 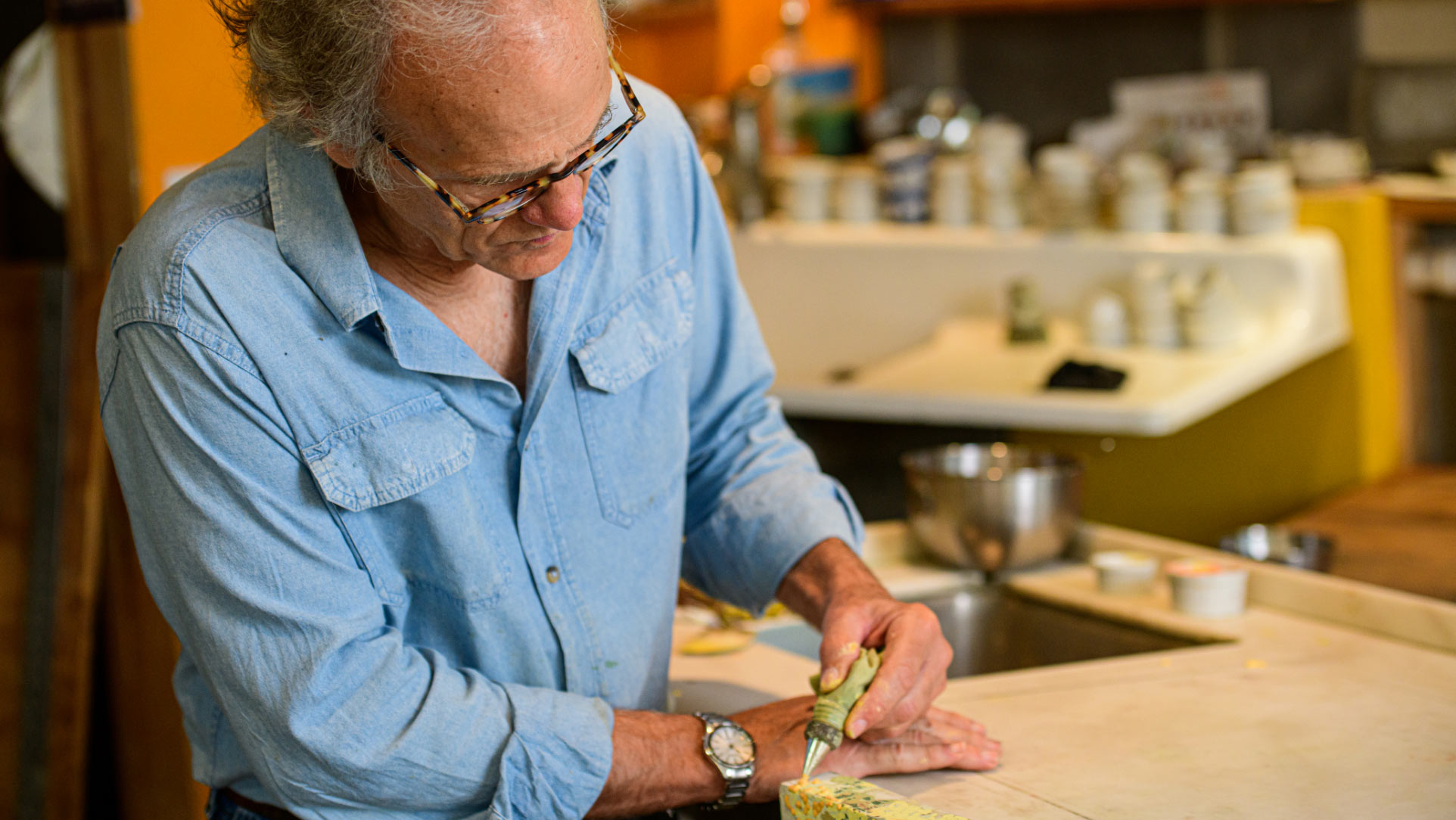 “My hands have taken a beating from the work I do, which is very hands-on.”

Lynn Sweet has been making art since 1970–building and designing furniture, as well as two-dimensional pieces like frescoes and watercolors. For the last 38 years, he’s supervised the wood shop at the University of Kentucky School of Art and Visual Studies, College of Fine Arts. His woodworking and his unique “modern fresco” process–in which he mixes earth pigments, marble dust and acrylic polymer and applies it to a surface through a piping bag–have taken the biggest toll on his hands and his livelihood. 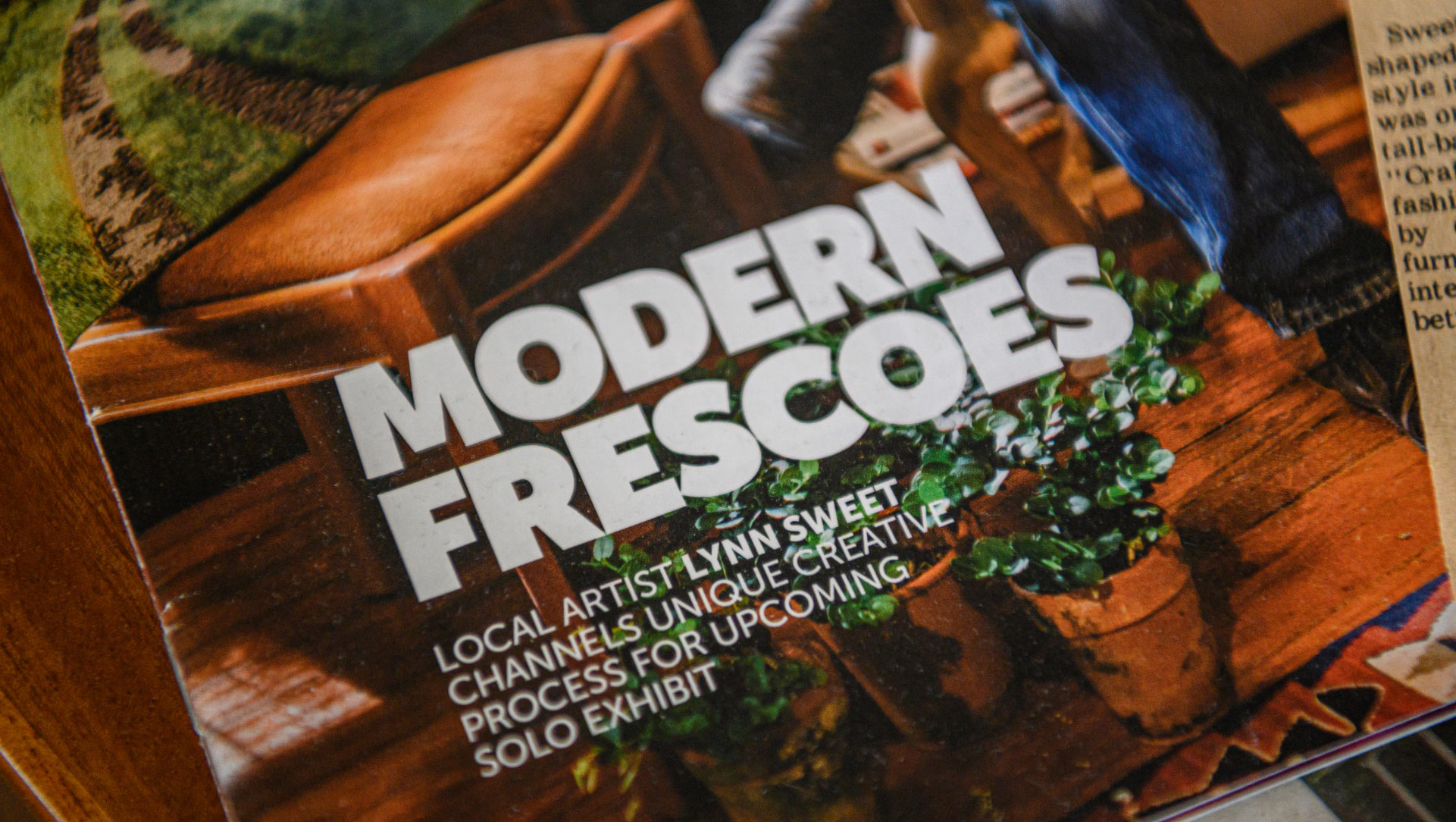 Lynn’s work has been especially hard on his hands—but it hasn’t stopped him.

“I’m a pretty industrious guy. I’ve always had some art project, whether it was building the furniture that I did or painting. I’ve become an older guy, all of a sudden. I came to the realization that I may not be able to do this—I anticipated doing it until I keeled over.”

Lynn tried wearing gloves and a hand brace to ease the pain, and for a while, it helped. But as more time passed, the pain progressed and he began to lose mobility. The bones and ligaments in Lynn’s hands had become weak due to years of overuse, and he knew it was only a matter of time before he would have to cease his work completely. 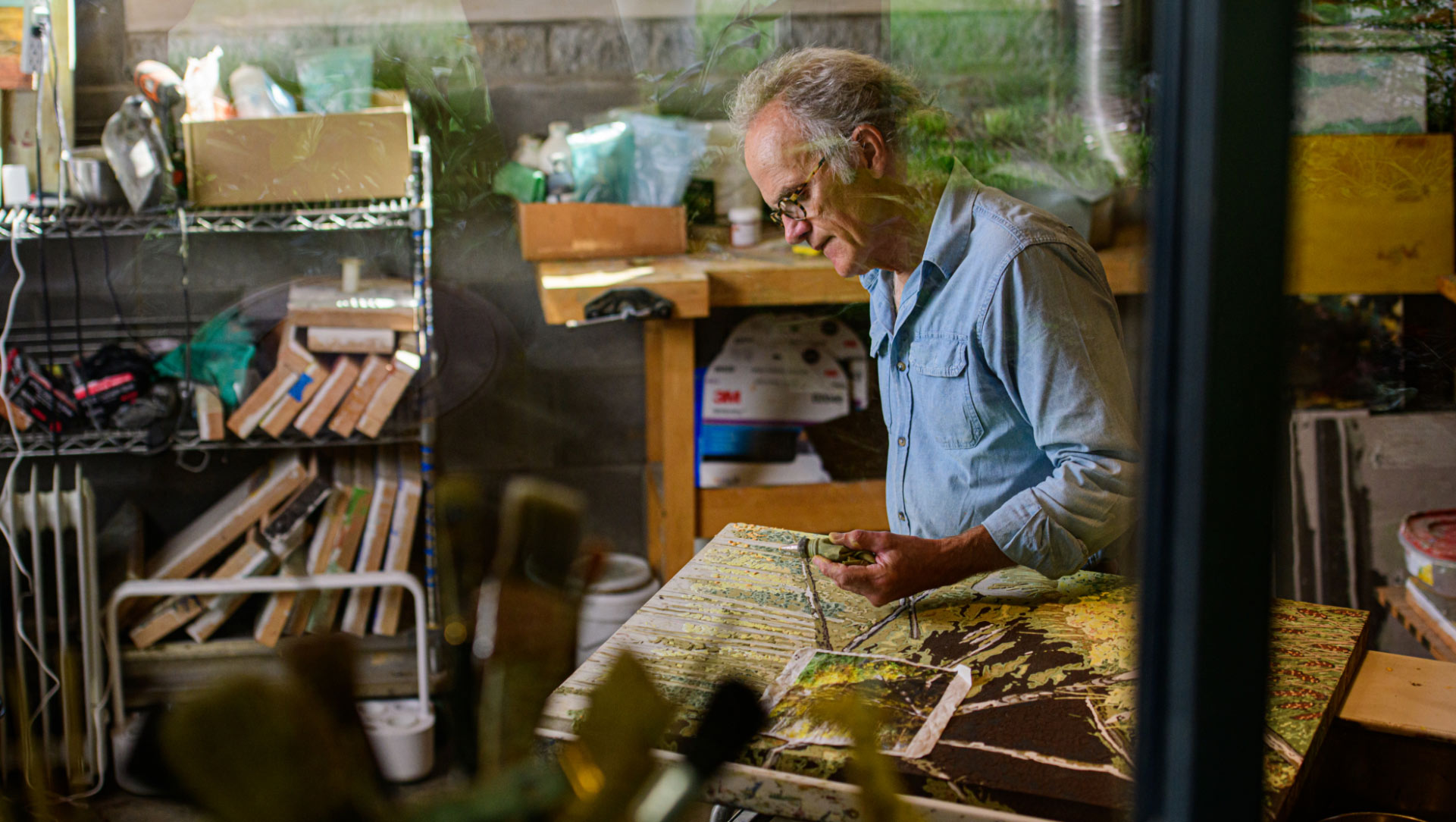 “Six or seven years ago I was doing some work and it was taking its toll on my hands, and my right hand, it shut down.”

Lynn knew that he needed treatment for his hands if he wanted to continue doing what he’s loved for the past nearly forty years. His position at the University of Kentucky led him to seek help at UK HealthCare Orthopaedic Surgery & Sports Medicine. After undergoing several different treatments and consulting with different doctors, Lynn was introduced to Dr. Maureen O’Shaughnessy, who specializes in hand surgery. 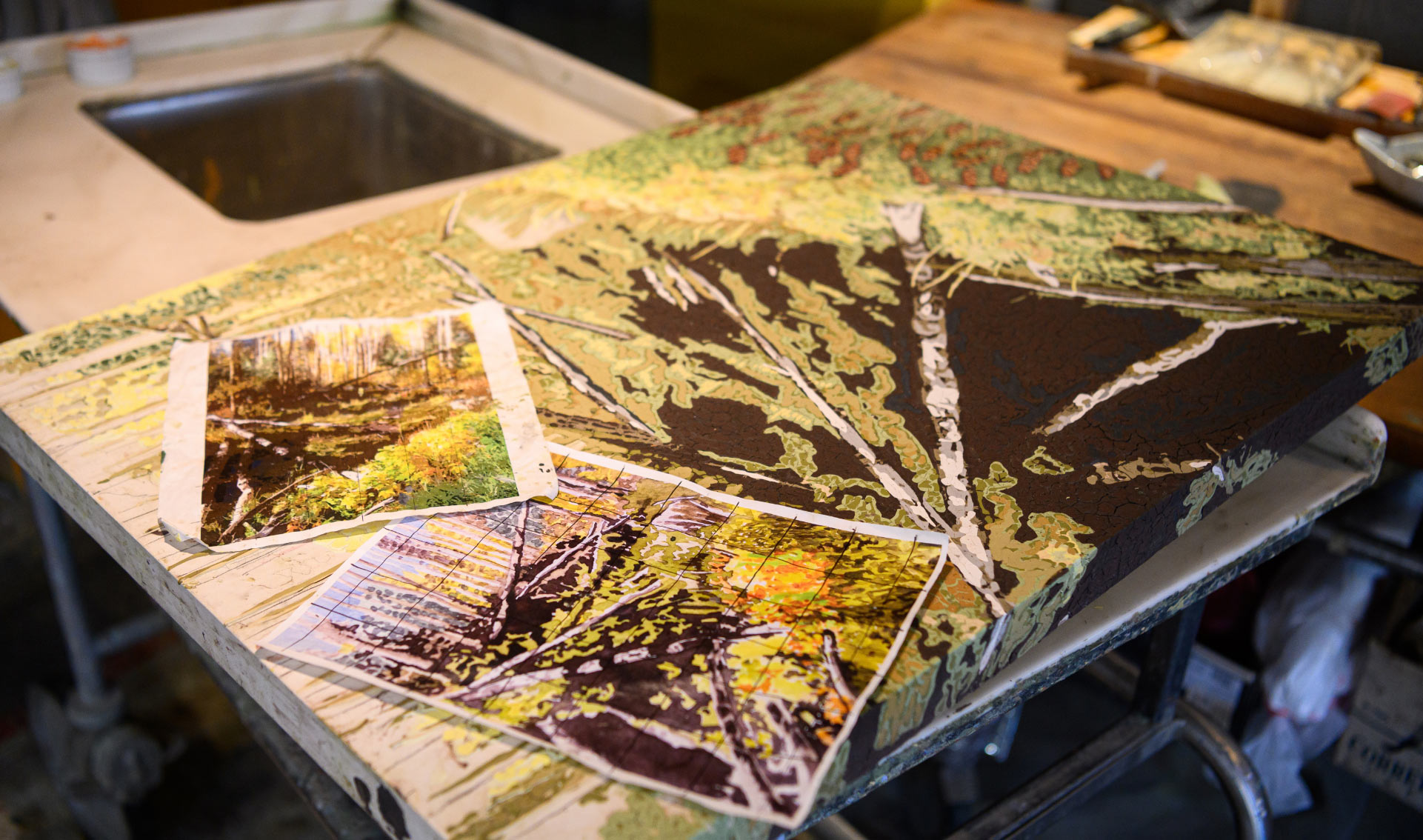 A large “modern fresco” in progress in Lynn’s studio.

Dr. O’Shaughnessy presented Lynn with a new procedure, one that she had learned during her training at the Mayo Clinic and Stanford University and brought with her to UK HealthCare. The idea of surgery was daunting for Lynn, but Dr. O’Shaughnessy assured him that this option would give him the mobility and the comfort that he so desperately needed to be able to continue his work. The delicate procedure uses a ballistic polyethylene material to tie into the ligaments and strengthen the structure of the hand and restore mobility. 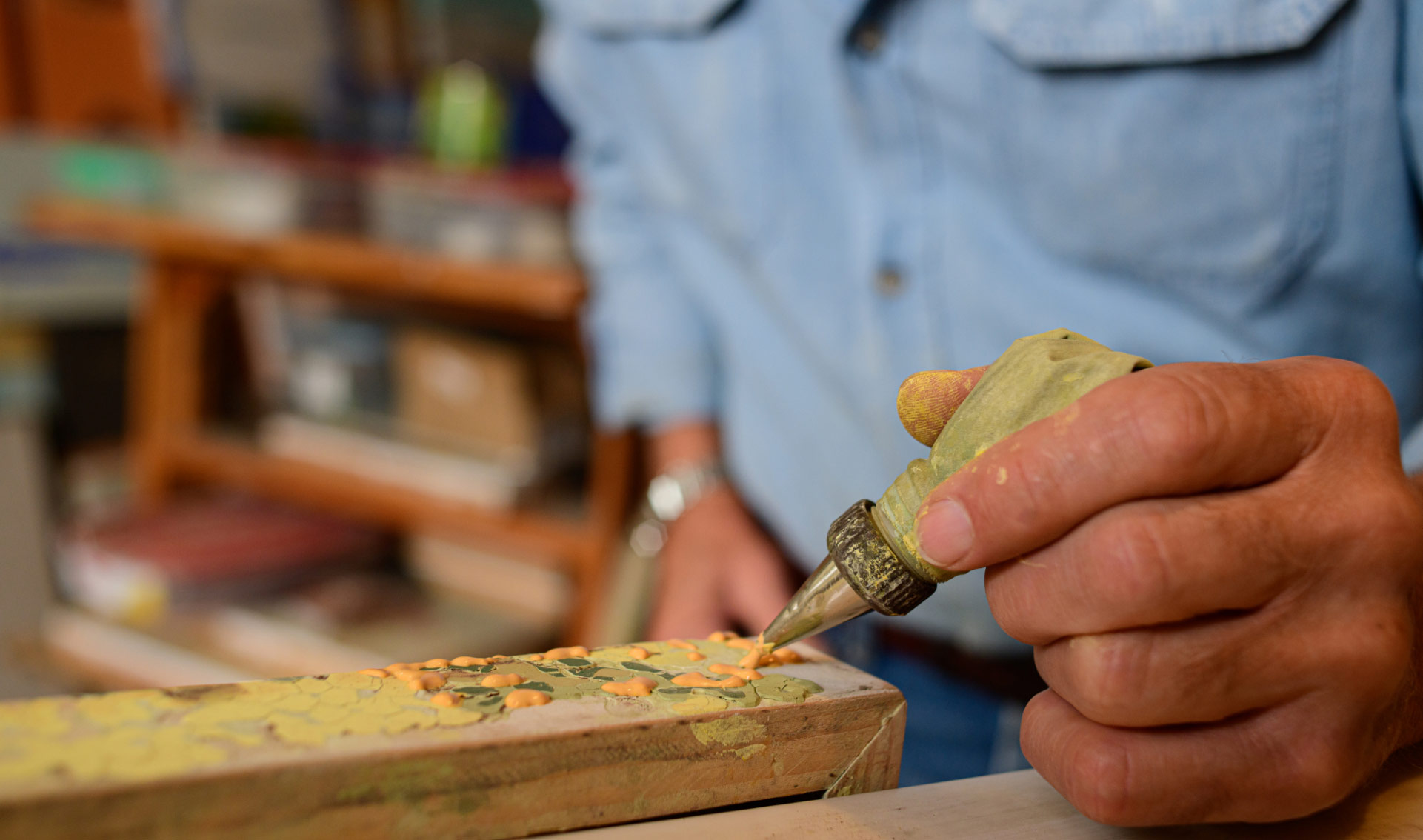 Lynn required surgery on both of his hands, but the team at UK HealthCare recommended a staggered approach. The first surgery was performed by Dr. O’Shaughnessy on Lynn’s sub-dominant hand, and nearly a year later, his dominant hand underwent surgery. Both of Lynn’s hands required post-surgery physical therapy and strength training to regain maximum mobility. 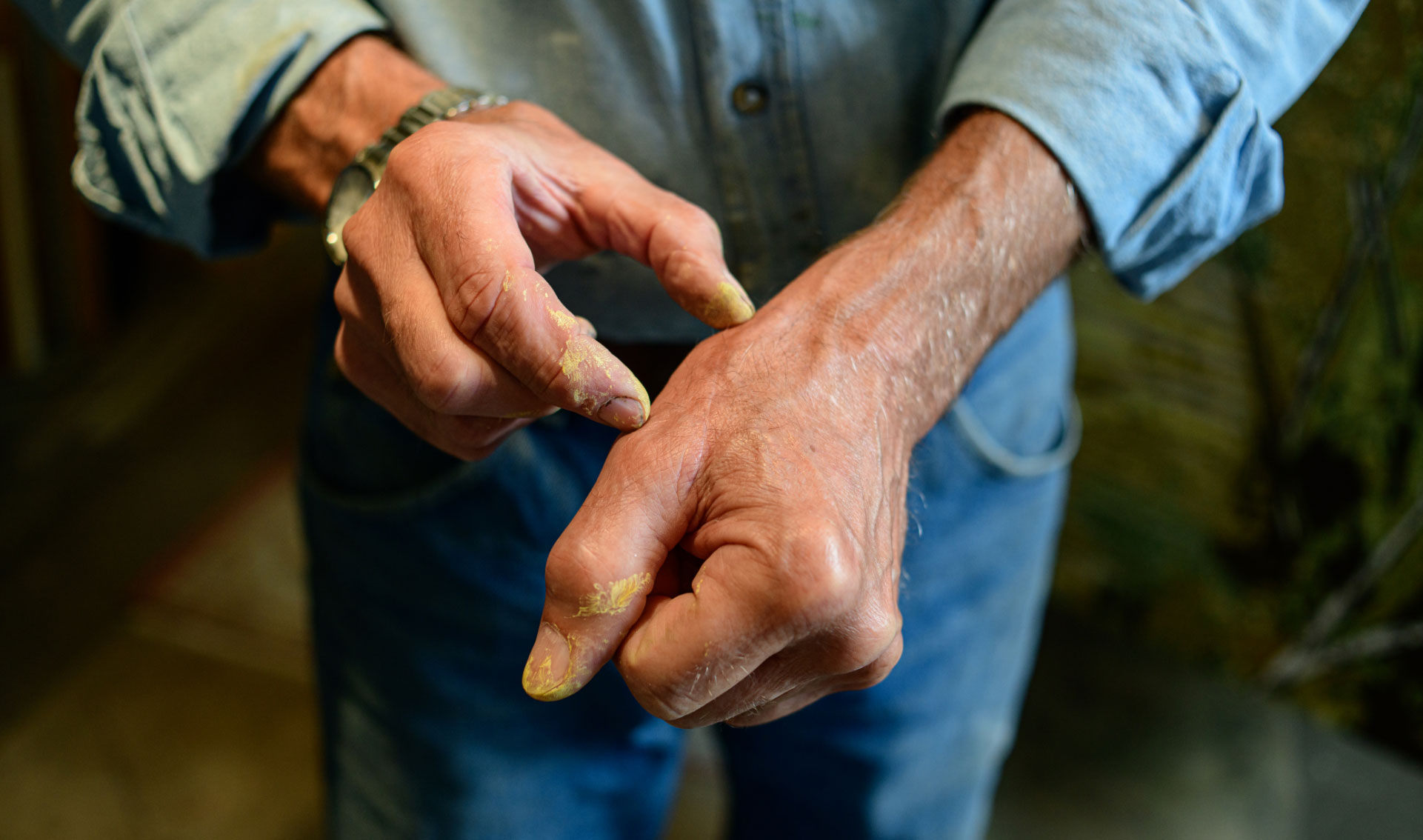 Lynn shows the site of one of his surgeries, now fully healed.

“I went from having a lot of pain as well as a limited range of motion and capability in my right hand to having basically no pain and a great deal more mobility. I’m now very happy with it. It’s absolutely a major quality of life change—it’s made my life a lot easier, and reduced the pain to almost nothing.” 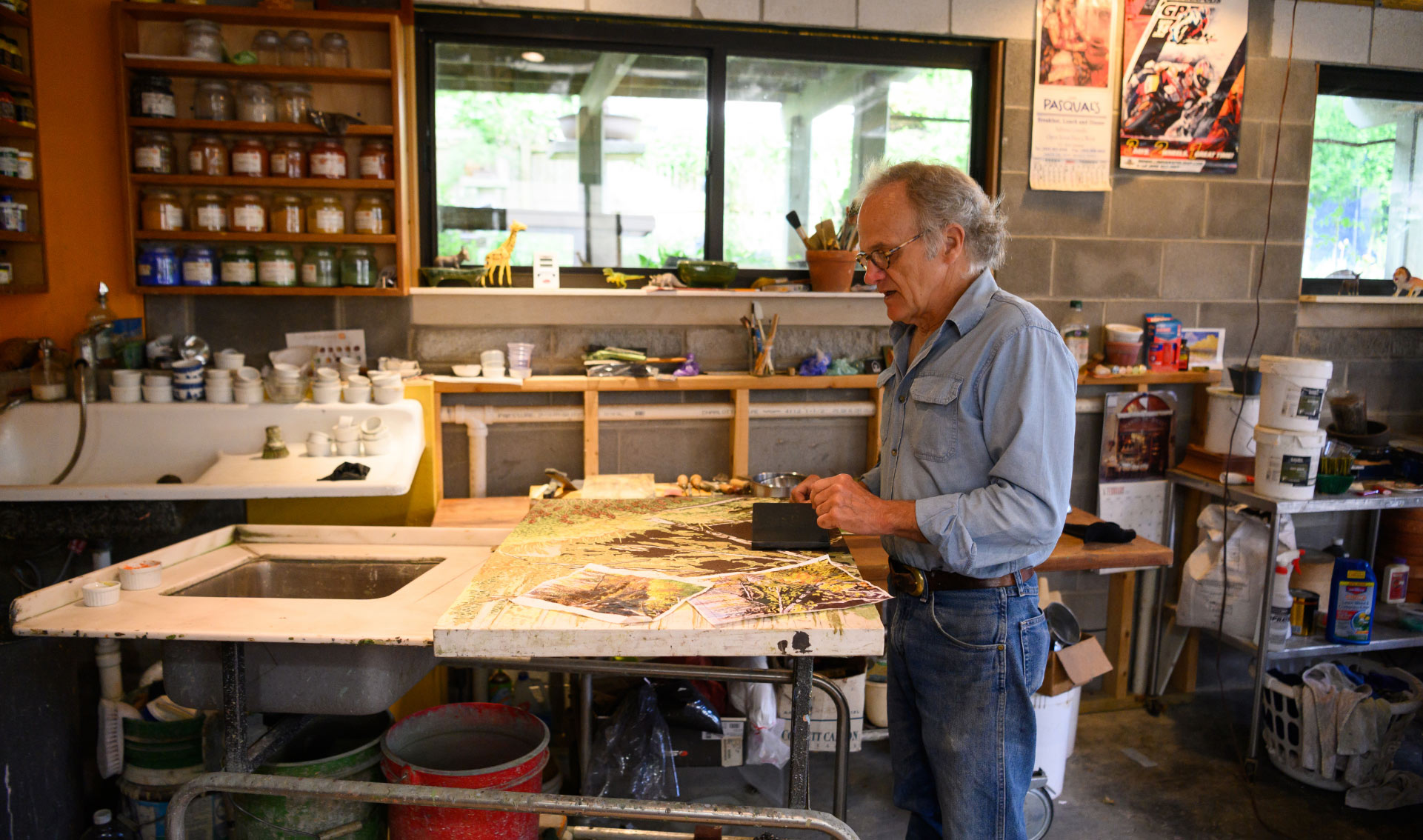 “I'm still doing physical therapy, but it continues to get better. I’m very happy with it.”

Despite his initial concern that his hands-on art days were behind him, Lynn has begun to take on more demanding projects as he’s regained strength after his first surgery. Today, as he recovers from his second and hopefully final surgery, Lynn’s hands aren’t the only thing that’s been restored. His hope and his ability to continue creating art have, too.

Lynn Sweet’s work can be found at New Editions Gallery in Lexington, or at lynnsweet.net 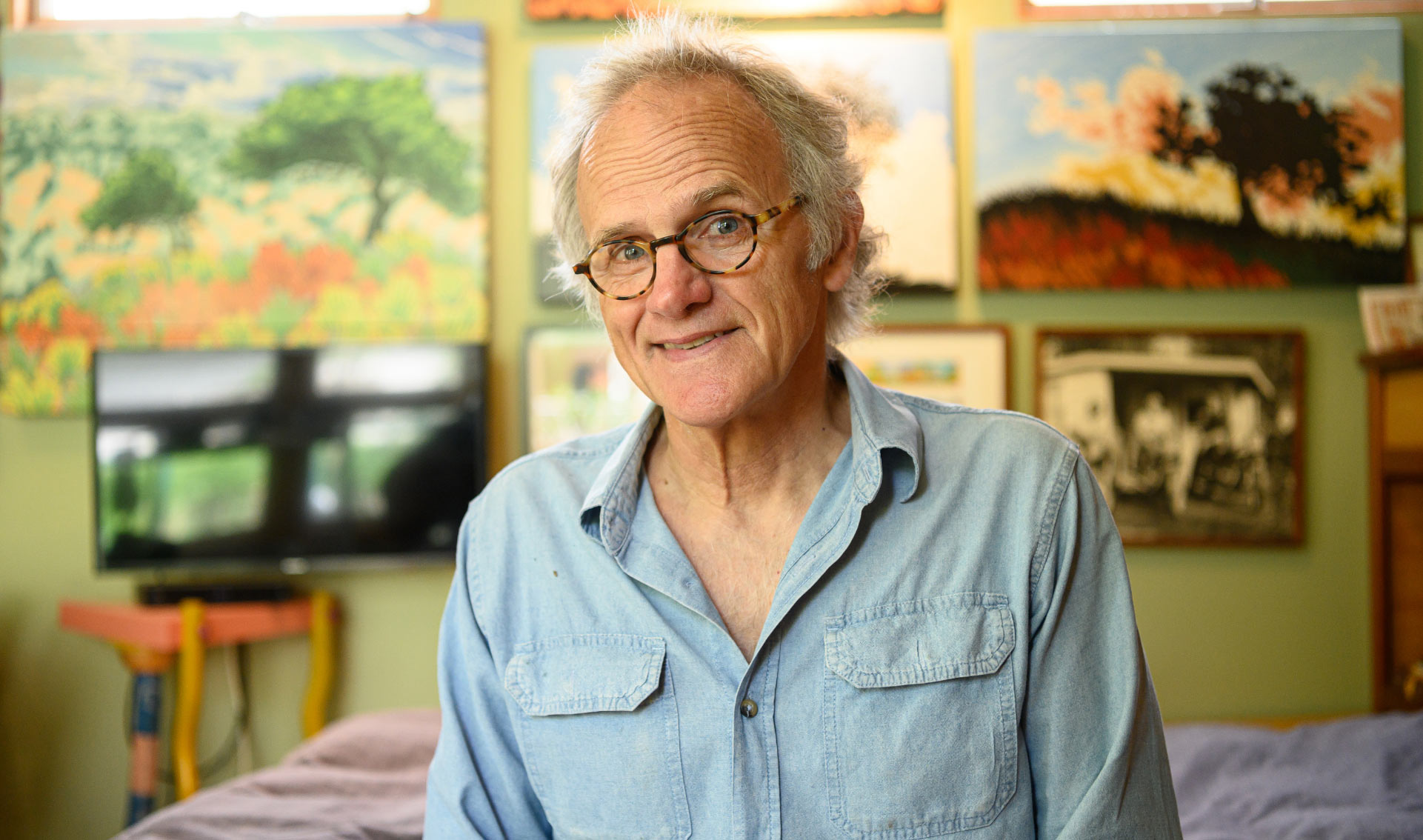 “I put a lot of faith in these people, and I feel like it's been well-positioned faith. I'm very hopeful.”

“What was done for me, I want to do for others.”Big Blue Nation, Orthopaedics