“I would see the parents coming in with all different needs with tiny, little babies. I really felt like this is really something we need to be involved in,” said Chantel Stoops. “There’s so much need across the board with hospitals, but especially children’s hospitals. Before, I never had any knowledge of what a NICU in a children’s hospital really entailed until I had to see it firsthand. The care was incredible and it really spoke to my heart and made me want to give back and made Mark and I both want to get involved.”

“For myself, my husband, my children as well as our entire team, it’s a privilege to work with Kentucky Children’s Hospital.”

A few years before they moved to Kentucky, Chantel and Mark Stoops were expecting their second son, Zack. When Chantel’s delivery date arrived, an emergency C-section was performed because the umbilical cord had wrapped around Zack’s neck and stomach. She gave birth to an otherwise healthy eight pound boy, but he was kept in the NICU for nearly a week due to the complications during Chantel’s delivery. The Stoops family’s experience in the NICU opened their eyes and hearts to the power of a children’s hospital. 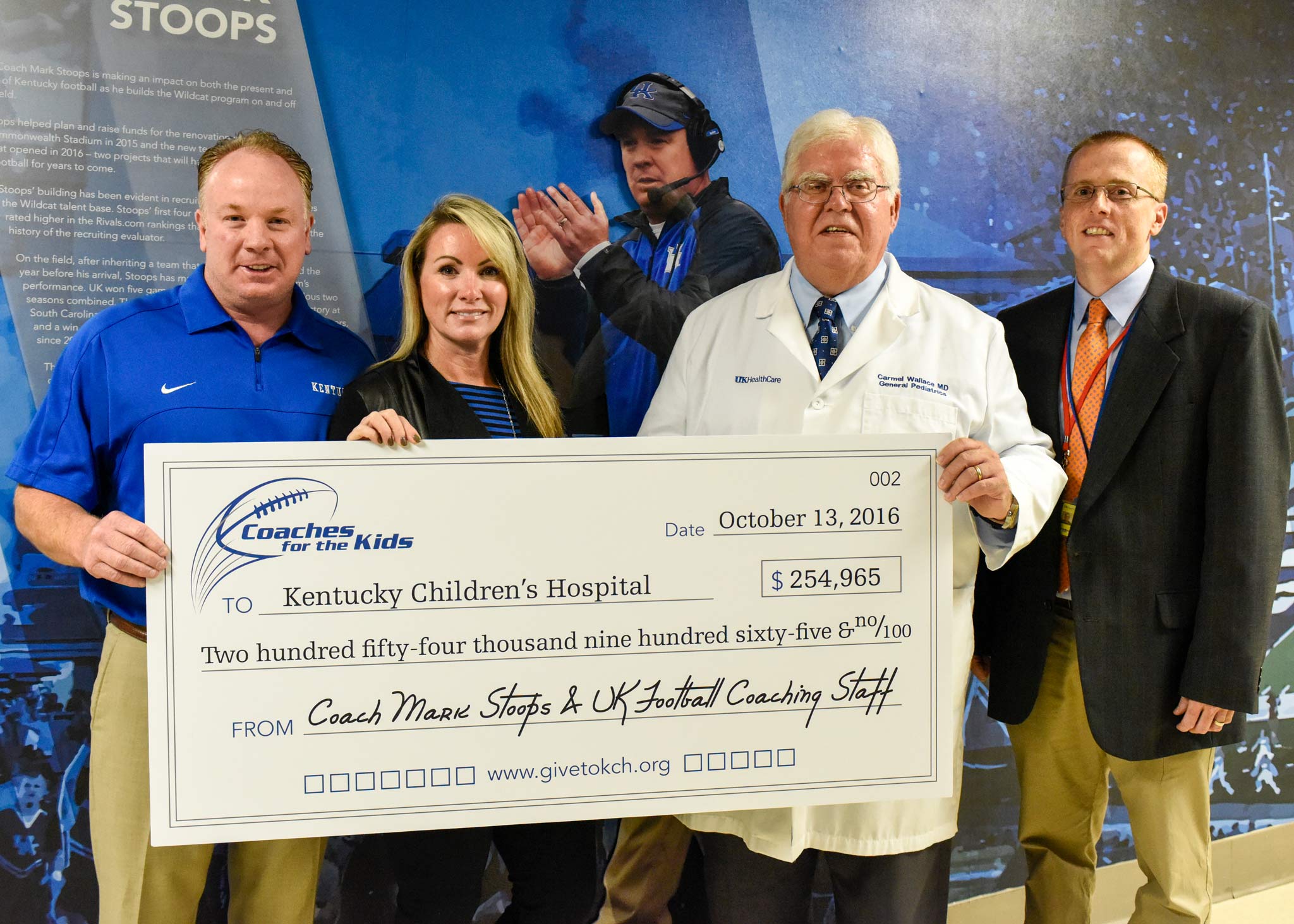 “Mark takes a lot of pride in the Coaches for the Kids event and he really pushes the coaches to work harder to get the funds.”

Since moving to Lexington, the Stoops family has been actively involved with Kentucky Children’s Hospital. Coach Stoops has been instrumental in the success of programs like Lift Them Up, which honors Kentucky Children’s Hospital patients before football games, and DanceBlue and Coaches for the Kids, both fundraisers for the hospital. The Coaches for the Kids program alone has raised nearly two million dollars for the hospital since 2013. 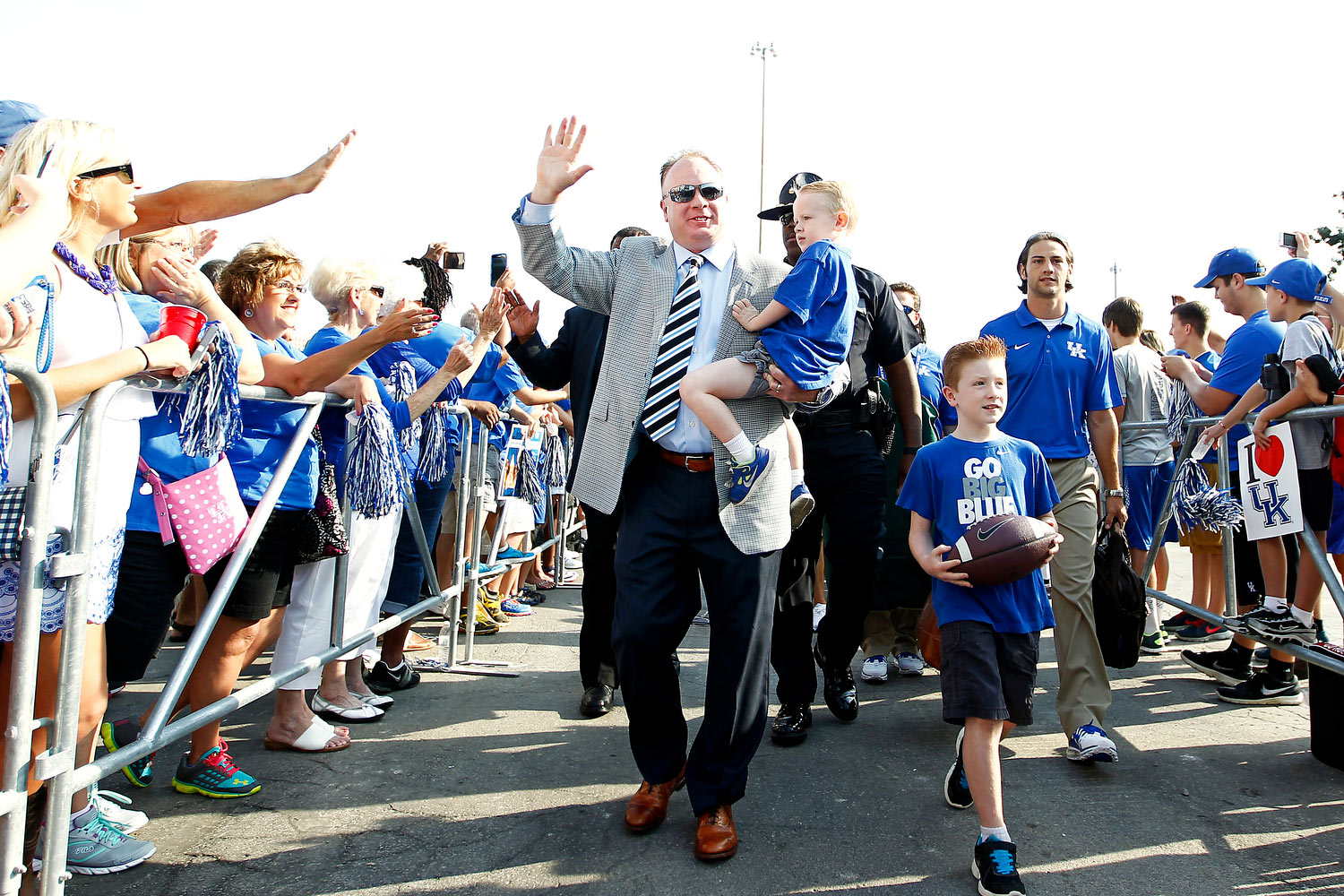 UK Football and supporting Kentucky Children’s Hospital is a family affair for Coach Stoops, Chantel and their kids.

Before every game, a Kentucky Children’s Hospital patient leads the football team down the Cat Walk.

“It’s really important for our players to be up close with people that are going through tough times or that have overcome tough times,” said Coach Stoops. “Any small part that we can do to help a young person or to help a family through difficult times, that’s the least we can do.” 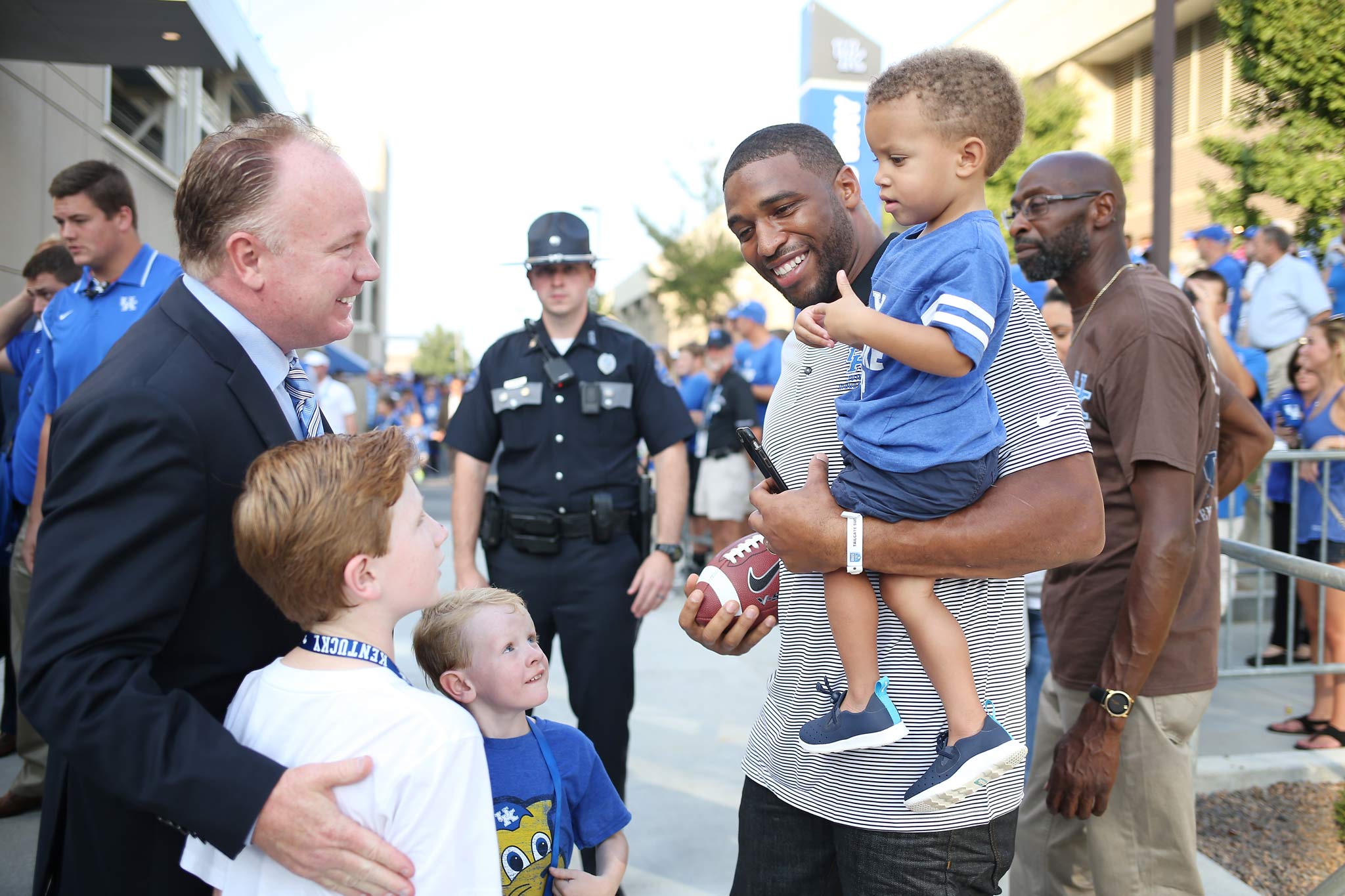 “These players really want to give back the community.”

The Lift Them Up and Coaches for the Kids programs, as well as the team’s overall involvement with the hospital, have been beneficial for players as well as patients, families, and hospital staff. Kash Daniel, a former Wildcat linebacker, is a prime example: through his visits and volunteering, he met his best friend, an eight-year-old named Ellie who’s battling acute lymphoblastic leukemia for the second time. 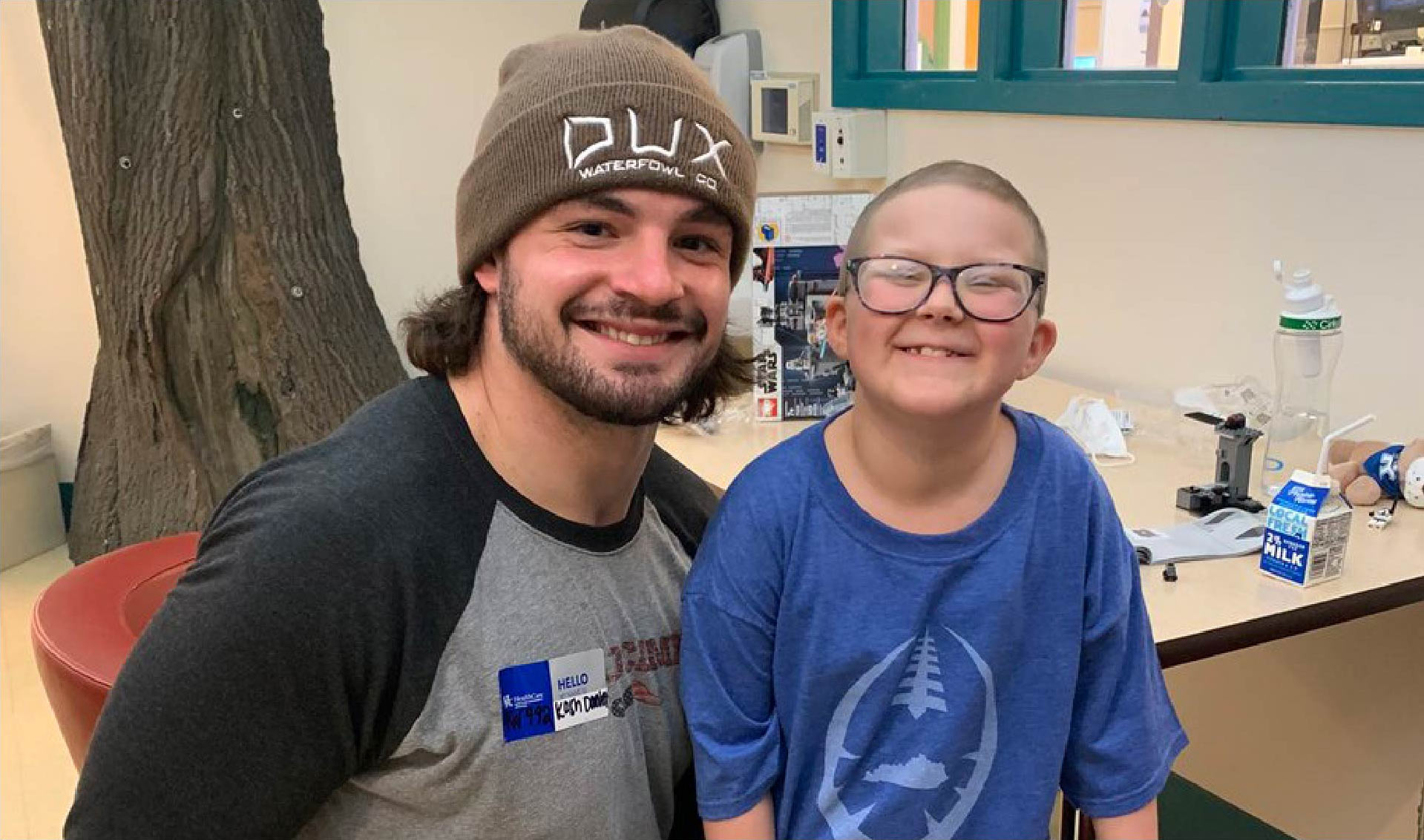 Kash and Ellie hang out in the Child Life Room at Kentucky Children’s Hospital.

“Her mom tells me that I help her with keeping her spirits up and everything, but she really helped me,” said Kash. “She helped me find my happiness again, and to know that no matter how bad I think my day is, there’s somebody out there whose day is ten times worse.”

Courtney Love, Director of Player Development for the football team, also sees that positivity and joy through the team’s work with Kentucky Children’s Hospital. “Our biggest thing is to get as many guys as we can over to the hospital. They see some of the circumstances that the children have to go through. I feel like our guys do get such inspiration out of it, even just to understand life is not all just about sports. It’s about changing lives, helping people be confident and being energized in life.”

Through their ties with the University of Kentucky football team, Kentucky Children’s Hospital and UK HealthCare, the Stoops family has created one Big Blue family in the heart of the Commonwealth. “The University of Kentucky is really gracious and good about letting our players be involved, letting us be involved, letting us speak about it and talk to the kids about it,” Chantel said. “It’s a very beautiful marriage between the two programs. It’s crazy how much it’s grown in the eight years that we’ve been here.” 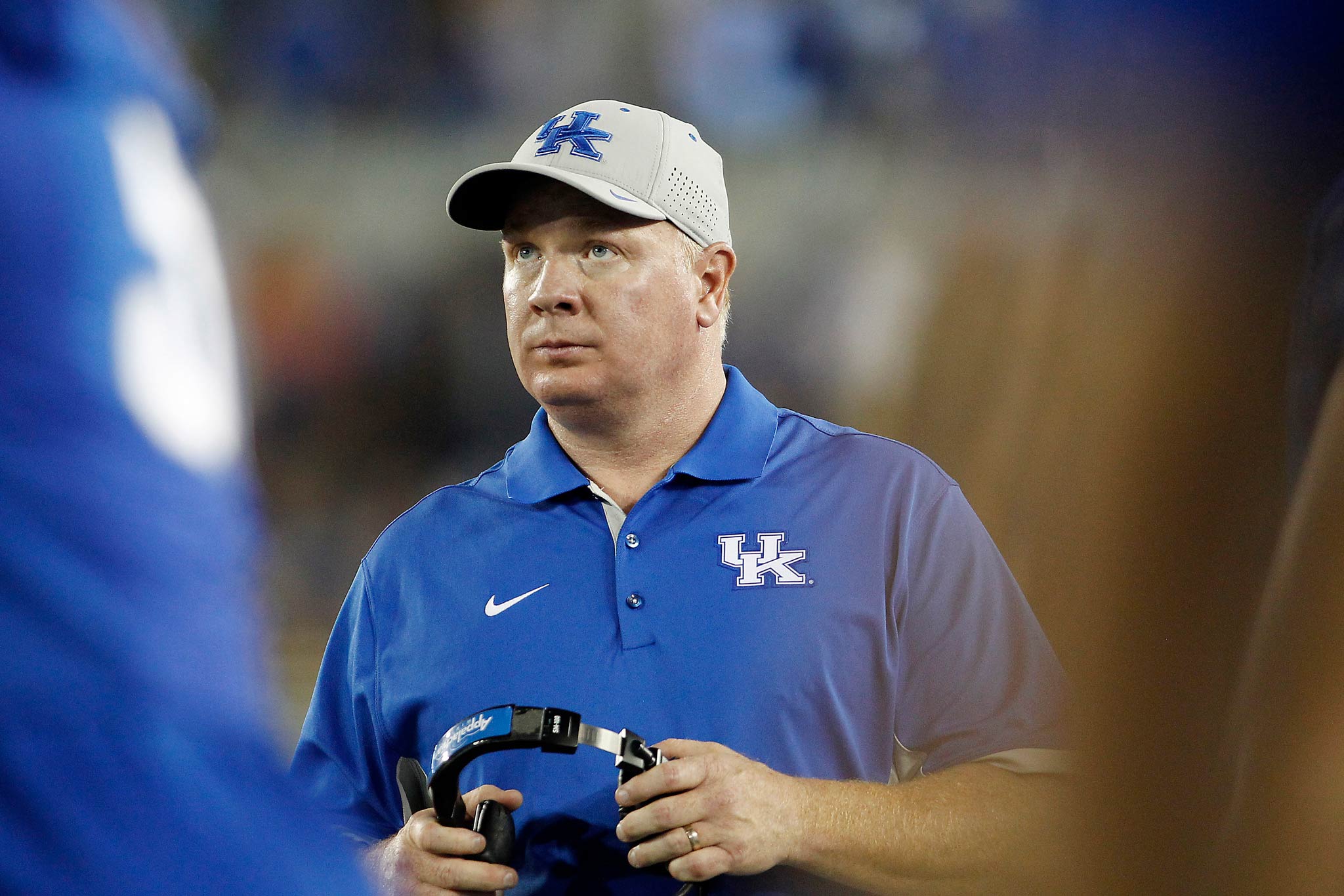 “What better way to try and help than to make a difference for the kids?”