Dedicated—On and Off the Field

“The patients love them. They see these big guys on TV every week, and here they are, pushing kids around the hospital. They’re interacting with the patients. They’re very good employees, and they’re meaningful to the operations of the hospital.” 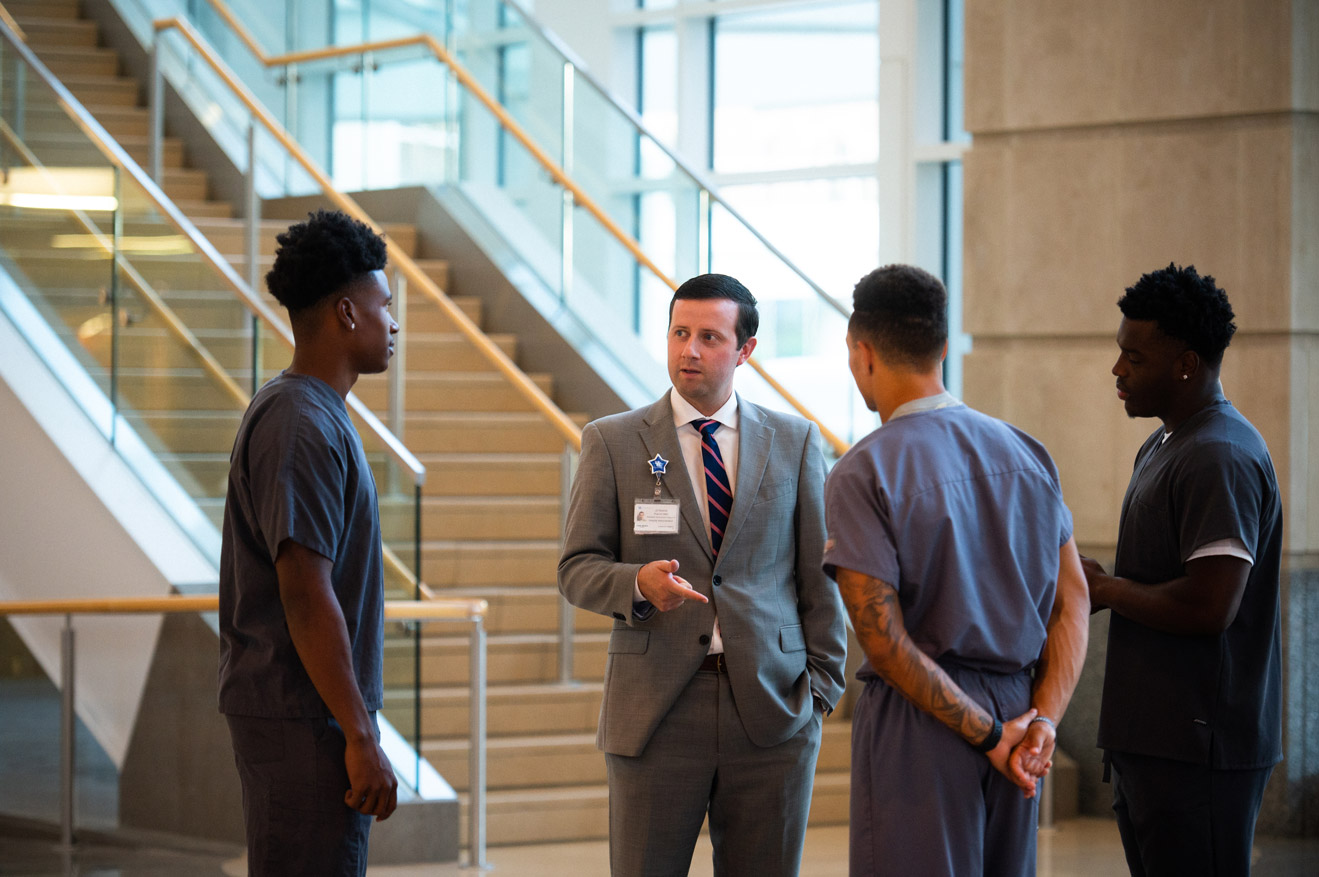 JJ talks with three members of the UK football team before their shifts at the hospital start.

UK has been part of JJ Housley’s life for a long time. A former UK football player, he was part of teams that went to three straight bowl games—while also working towards a degree in pharmacy and an MBA. After he graduated, he made his way into a fellowship at UK HealthCare, eventually taking a position as an Assistant Hospital Administrator. 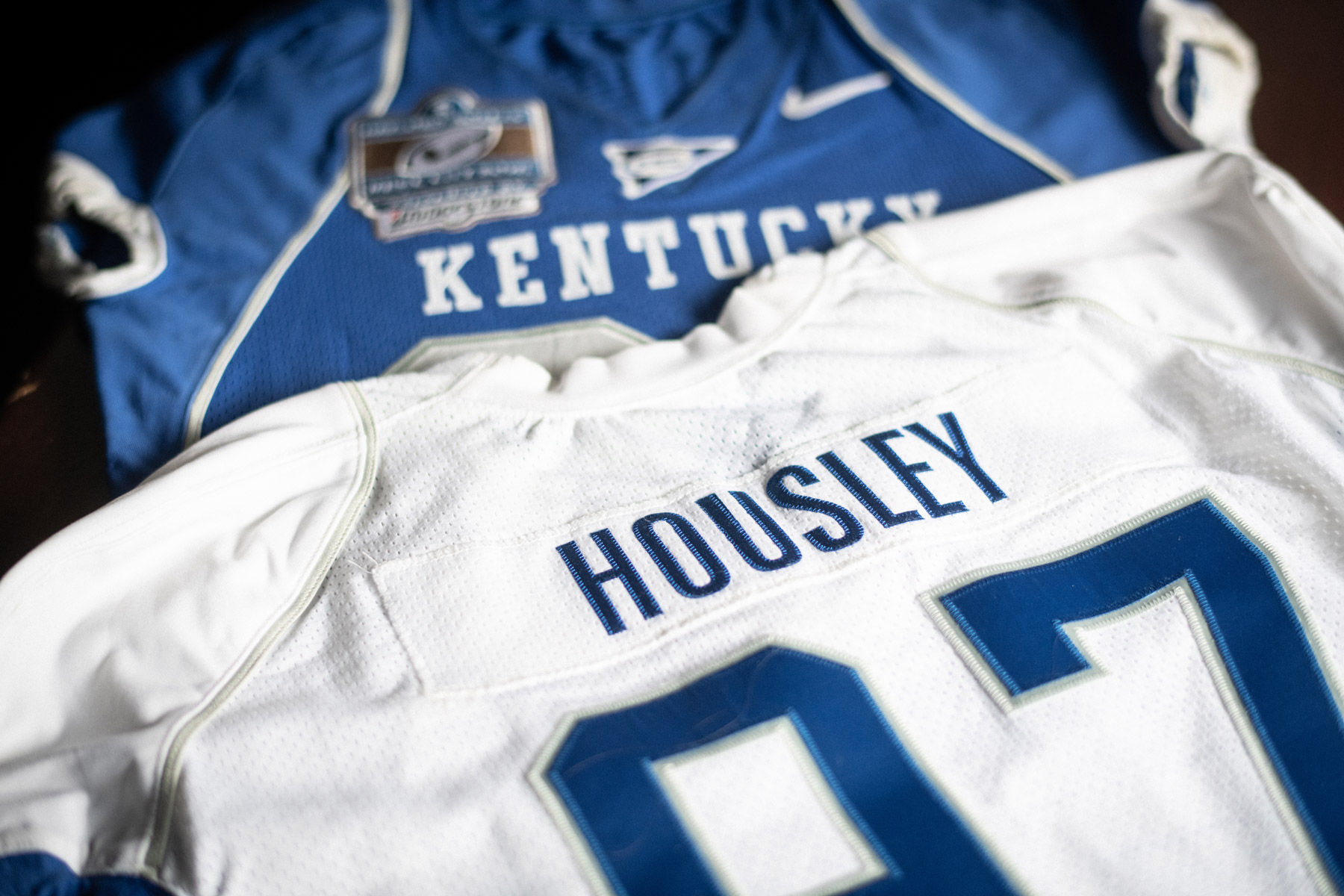 JJ came to UK in 2004 to do two things: play football, and go to pharmacy school.

JJ knows the difference that opportunities in college can make for athletes. So he’s been active in showing athletes—especially football players—what the healthcare field has to offer. Sometimes that means giving potential recruits tours of the hospital, even going up to the helipad to give them an unmissable view of the football stadium. And sometimes it’s meant helping find roles in the hospital that are uniquely suited for football players. 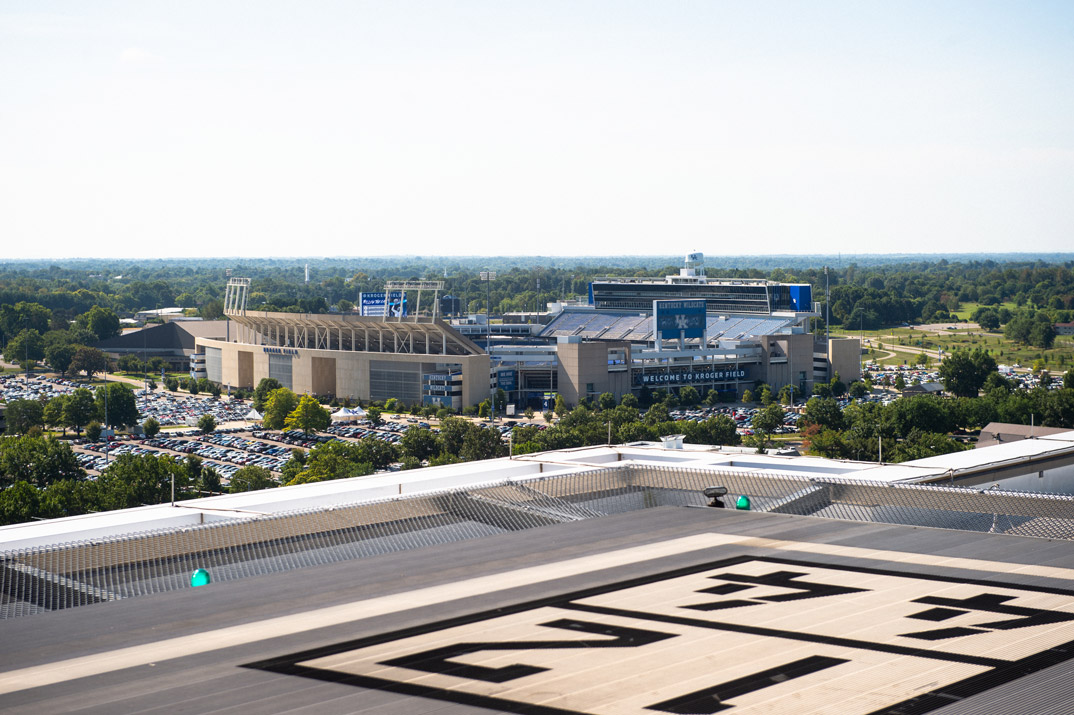 When football recruits are interested in healthcare, JJ brings them up to the hospital helipad to give them a different view of the stadium.

“Patient transport is a department that needs flexible employees who are able to work four hours here and there. It made a lot of sense as a workplace for football players. The players really like it. They get to interact with all the different departments—one minute they’re going to the children’s hospital and the next minute they’re taking somebody to the OR. So they get to see a lot of different healthcare professionals, and they start thinking, ‘After I graduate, there are some opportunities for me in the healthcare system.’” 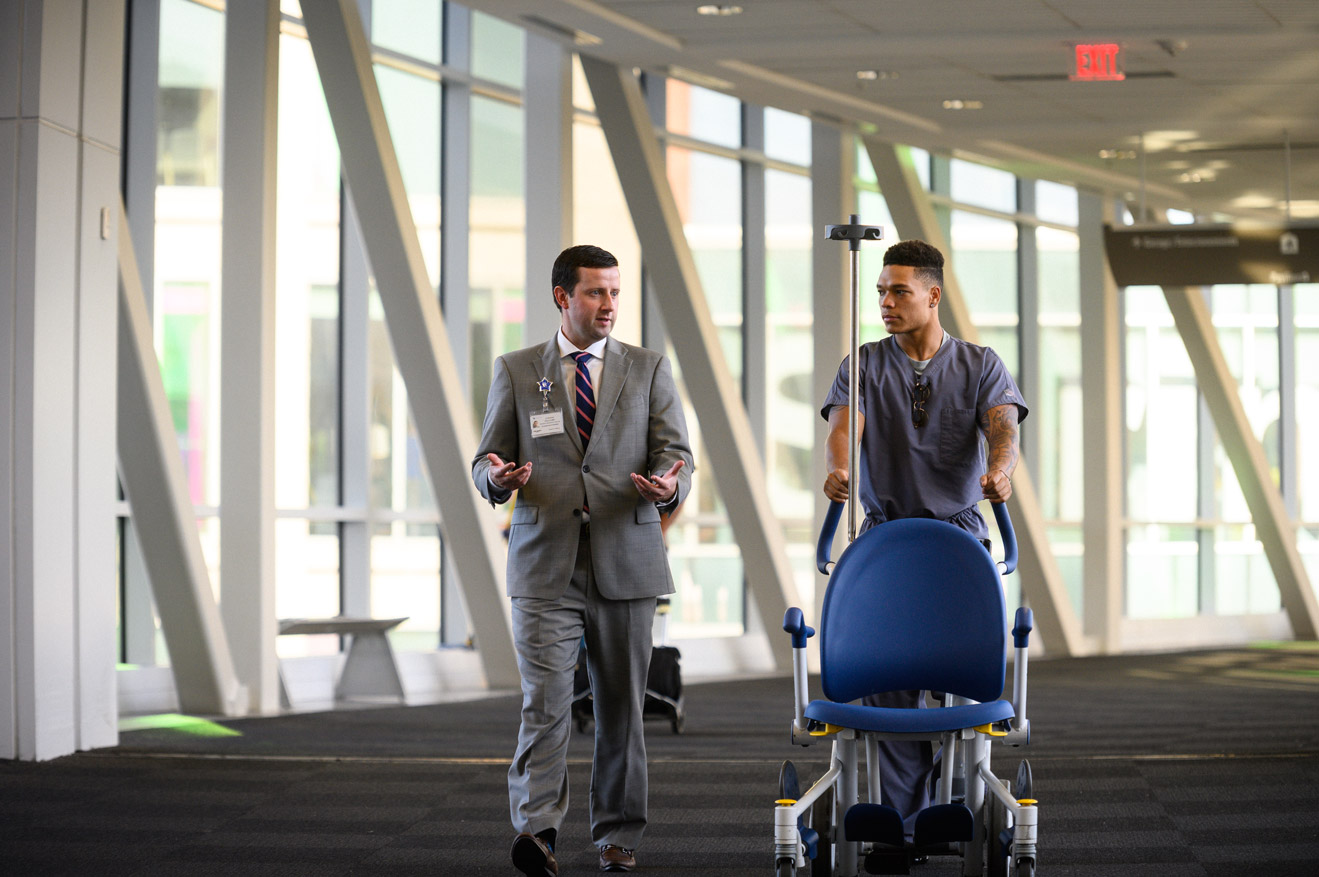 “There’s a tight bond between UK HealthCare and Athletics, and it’s mutually beneficial.”

For JJ, the overlap between athletics and the hospital is a natural one. He’s seen how both UK athletics and UK HealthCare have served the Commonwealth, bringing the state together. 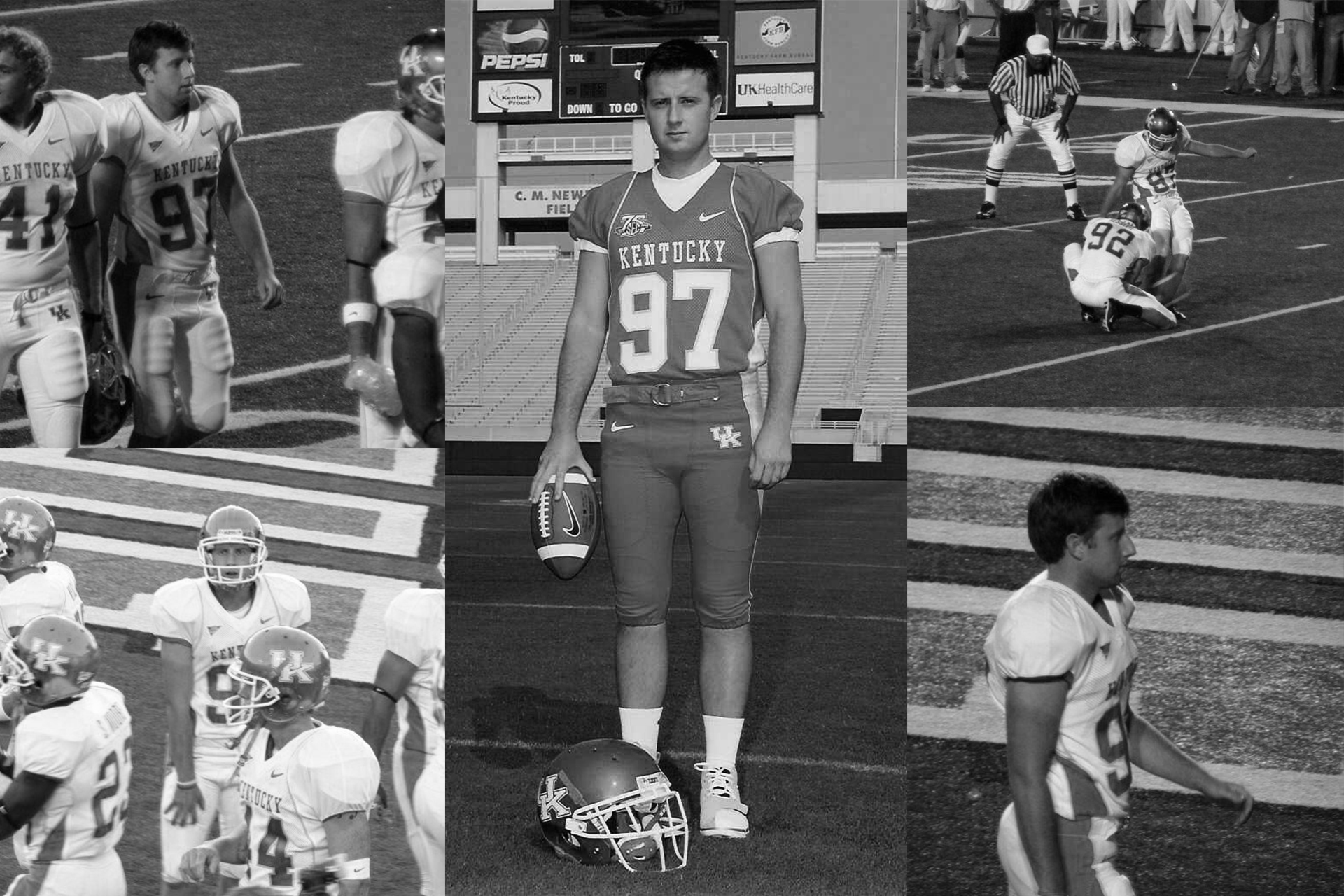 JJ joined UK’s football team as a kicker in 2004. As a red shirt freshman, he played five seasons with the team.

“It’s fascinating to me how many connections cross over from athletics to healthcare in the community. To be able to work at an institution that’s focused on taking care of Kentuckians, it means a lot. There’s pride in working for the University of Kentucky, and I can see that both in the athletic programs and the hospital system and the healthcare system.” 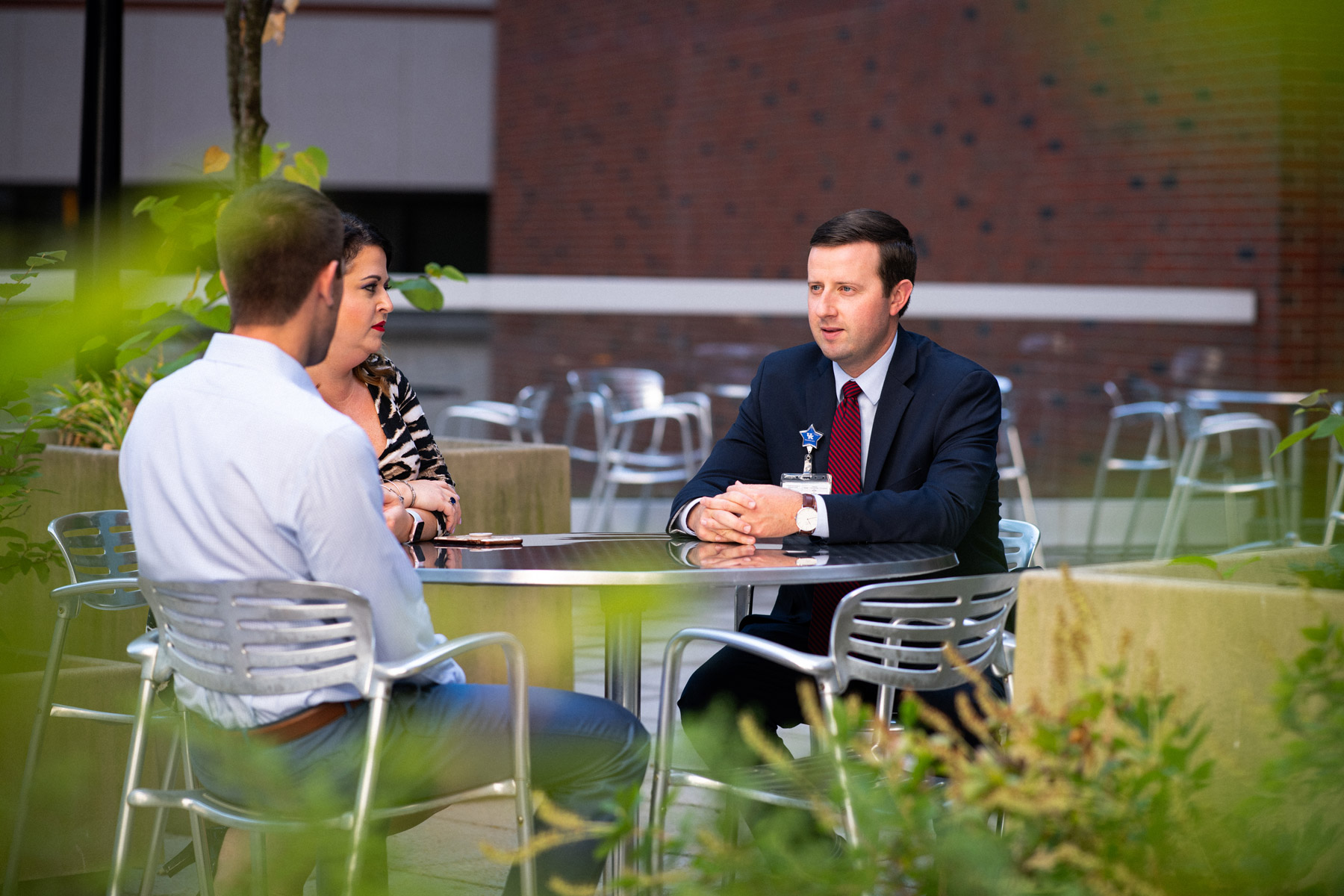 “From the front door through to patients going home, we’re making sure that patients are supported.”

As a hospital administrator, JJ is focused on the future of UK HealthCare, building and strengthening the institution to better serve Kentuckians. Whether that means helping fill the thousands of roles that keep the hospital running every day or working on longer-term projects to expand the hospital’s reach, he always keeps a larger mission in mind. 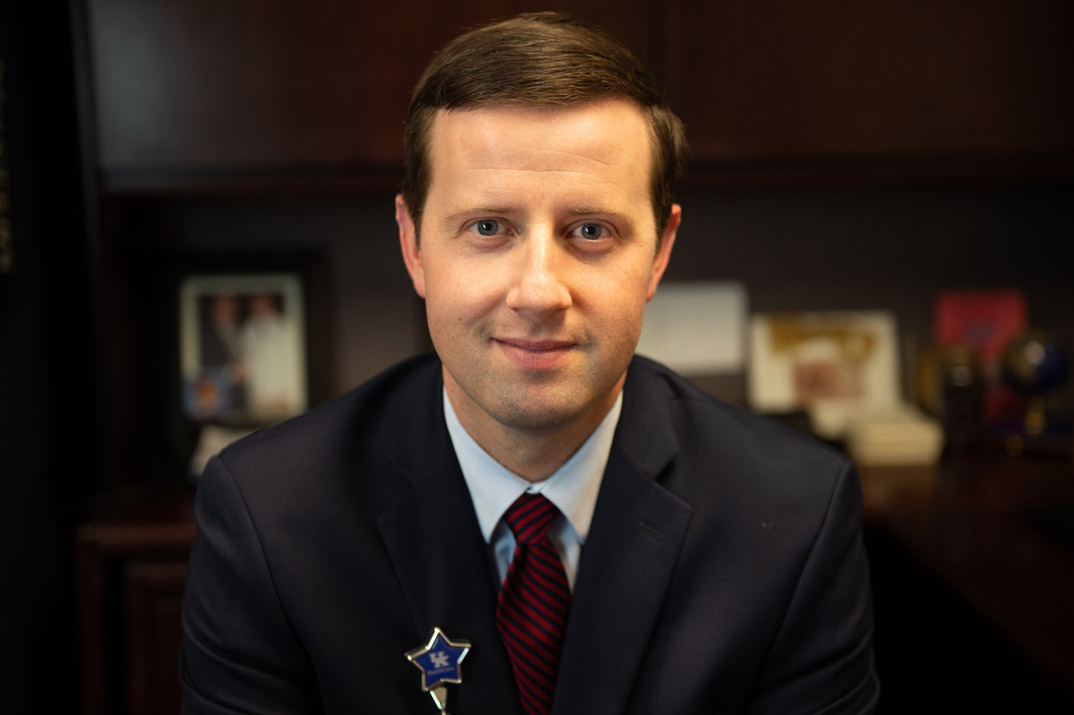 “To be able to work at an institution that's focused on taking care of Kentuckians, it means a lot."

“We want to be the hospital for Kentucky. I’m well aware of those areas that are underserved from a healthcare perspective. We need to build facilities that are for every Kentuckian, so that when they get sick, and their local community can’t take care of them anymore, they come to us.”

See how we care for the Big Blue Nation at UK HealthCare.