A Spitfire and a Survivor

“She has always had some rebelliousness in her. I think that is what keeps these cystic fibrosis patients going. They are the most stubborn kids in the world. They have this will to live that keeps them going.” 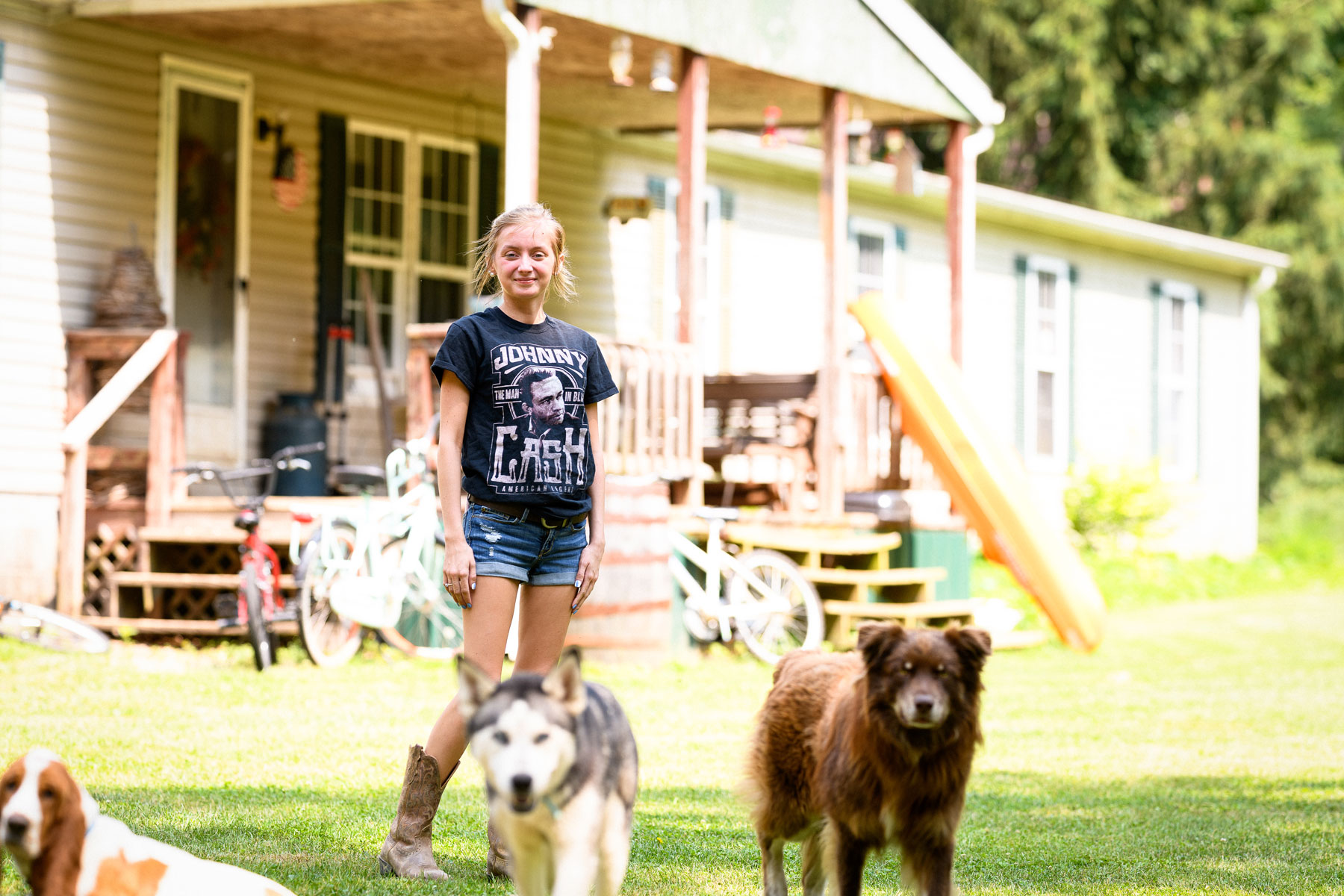 At her grandmother’s house in Olive Hill, Breanna is finally able to live the life she always wanted.

Breanna Jessie’s will to live is legendary. Throughout UK HealthCare and her hometown of Olive Hill, she’s been described as a firecracker. Diagnosed with cystic fibrosis at age 3, her fierce determination carried her through her childhood and most of high school, despite her health issues. 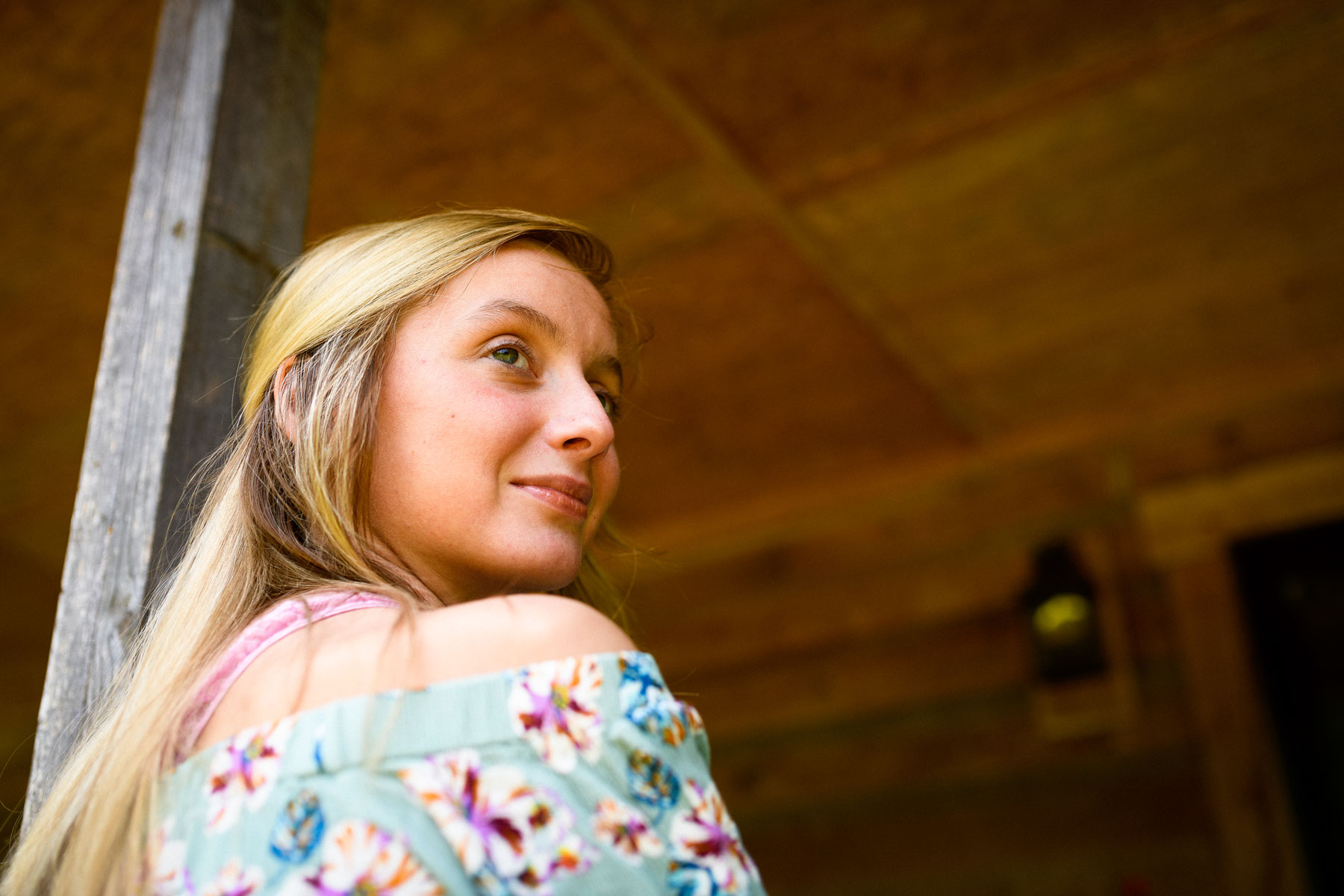 Prior to her transplant, Breanna had to spend much of her time inside. “I learned a lot of board games at a young age.”

“She came to the clinic one day and I told her, “You’re sick. Your lung function is way down,’” said Dr. Jamshed Kanga, chief of pediatric pulmonology at Kentucky Children’s Hospital and Breanna’s longtime doctor. “She said, ‘I’m just fine. Let me show you what I did yesterday.’ And she showed me one of her routines from a dance competition. You wouldn’t know there was anything wrong with her.” 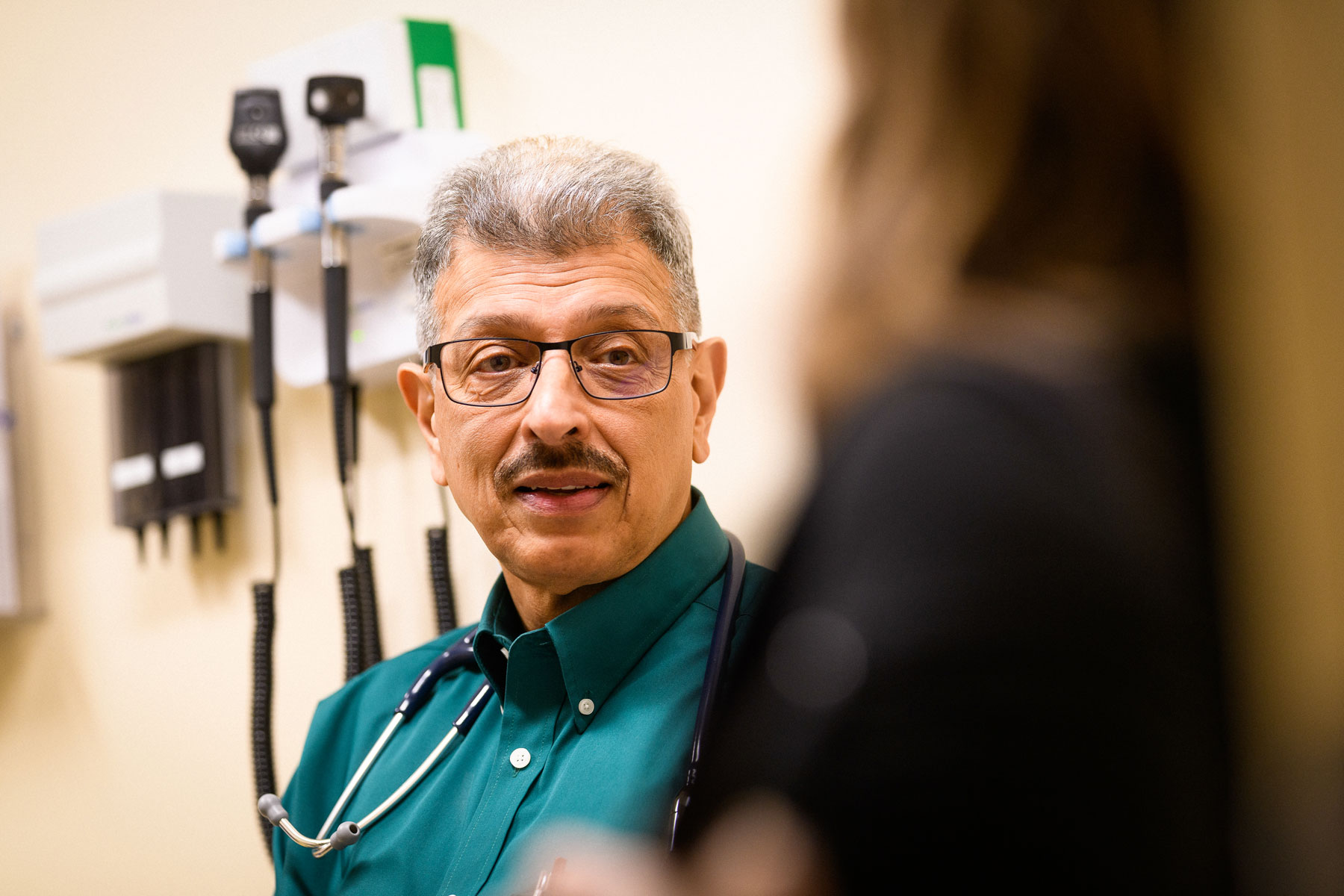 Pediatric pulmonologist Dr. Jamshed Kanga has managed Breanna’s cystic fibrosis for most of her life.

At the end of her junior year of high school, Breanna’s health took a sharp downturn. She collapsed at a festival and nearly bled to death. After that, her condition continued to go downhill. “My lung function just kept going down, down, down after that,” Breanna said. “All I wanted was to be able to graduate from high school.” 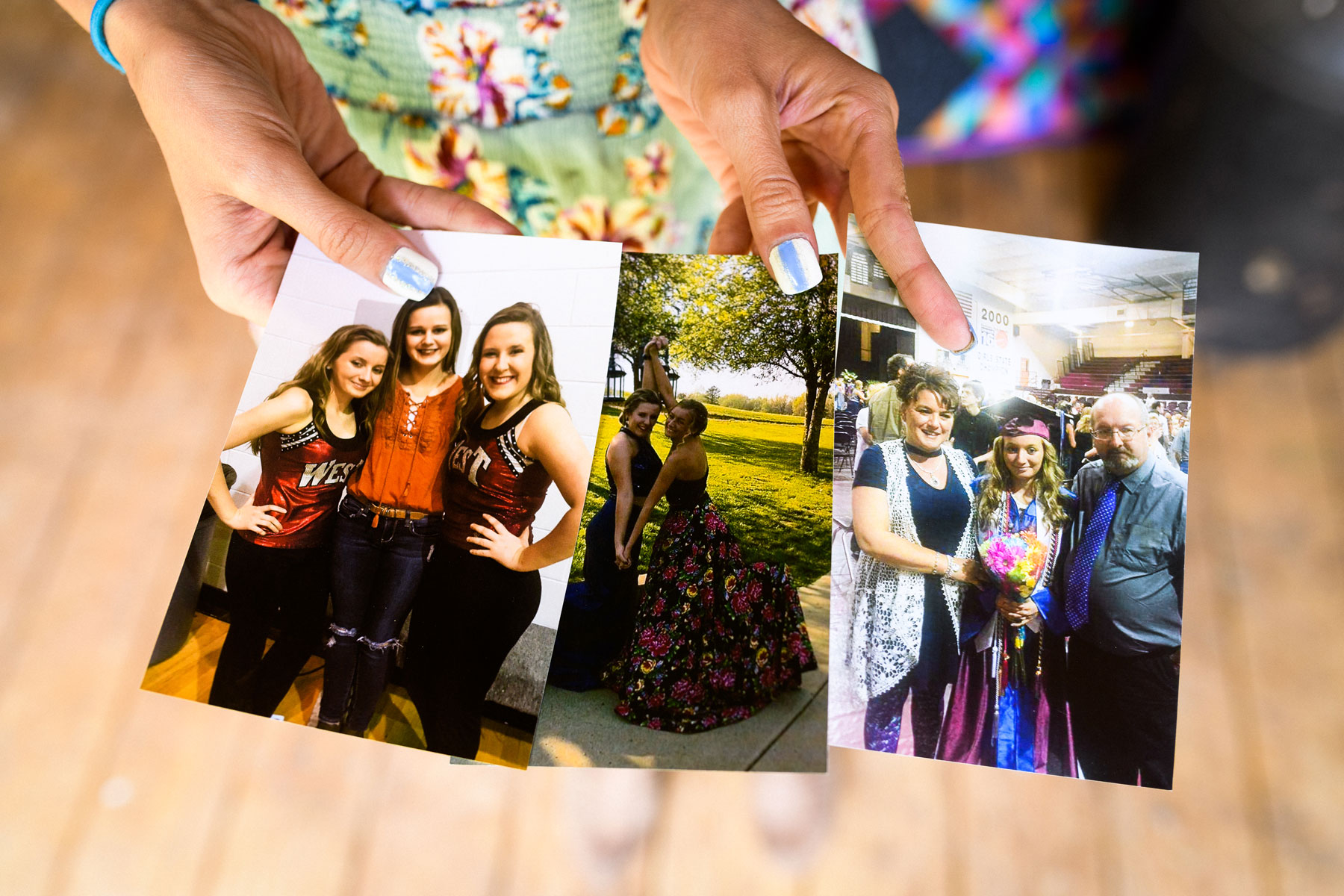 As Breanna’s lungs deteriorated, she was put on a ventilator, then moved to the advanced life support of an ECMO machine. It was clear that she needed a lung transplant. 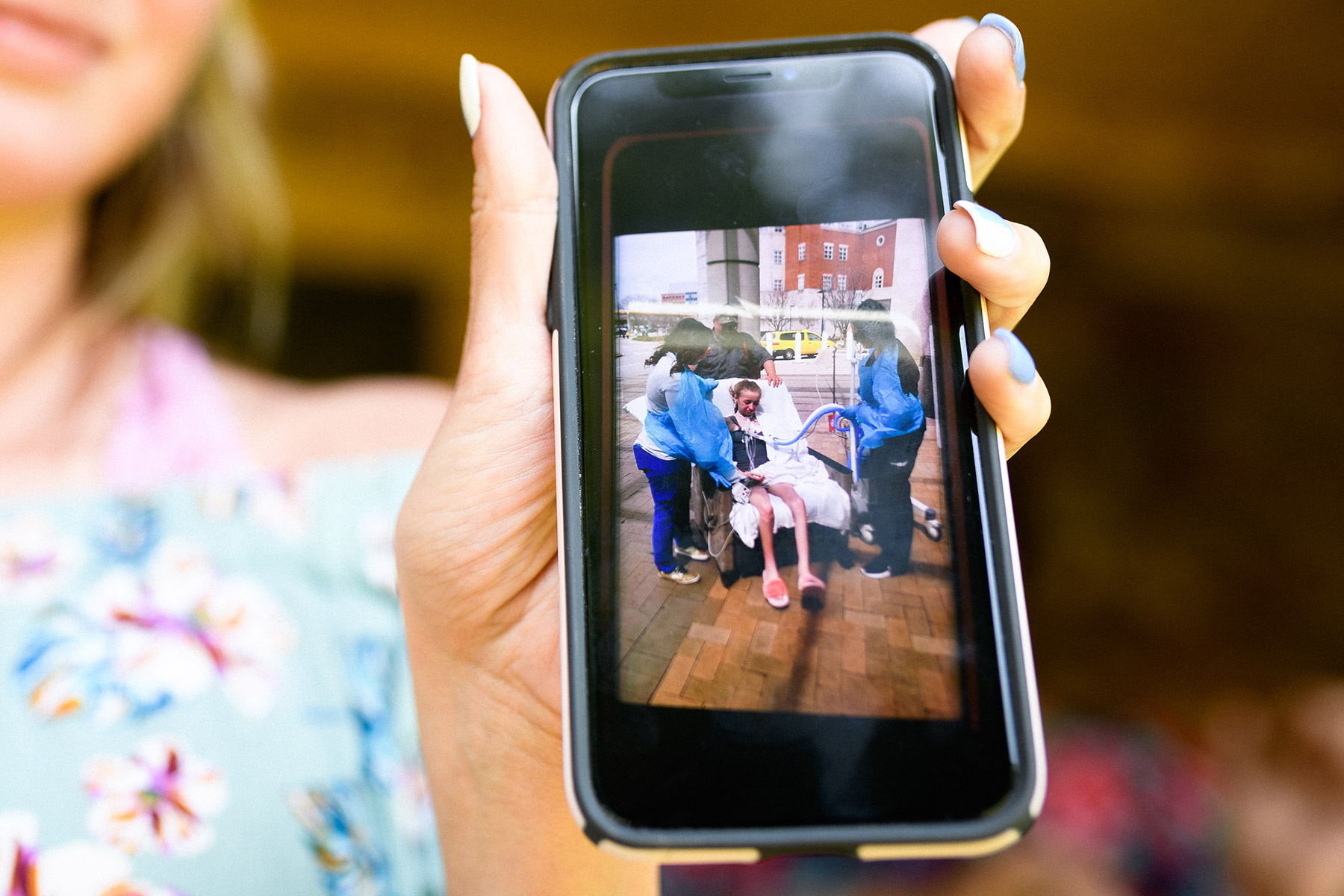 At her weakest, Breanna had to be put on a ventilator, and, eventually, advanced life support.

“[Dr. Anstead] told me, ‘You won’t walk out of this hospital without a new set of lungs,’” Breanna recalled, referencing Dr. Michael Anstead, medical director of the Center for Lung Transplant and director of the Adult Cystic Fibrosis Clinic at UK HealthCare. 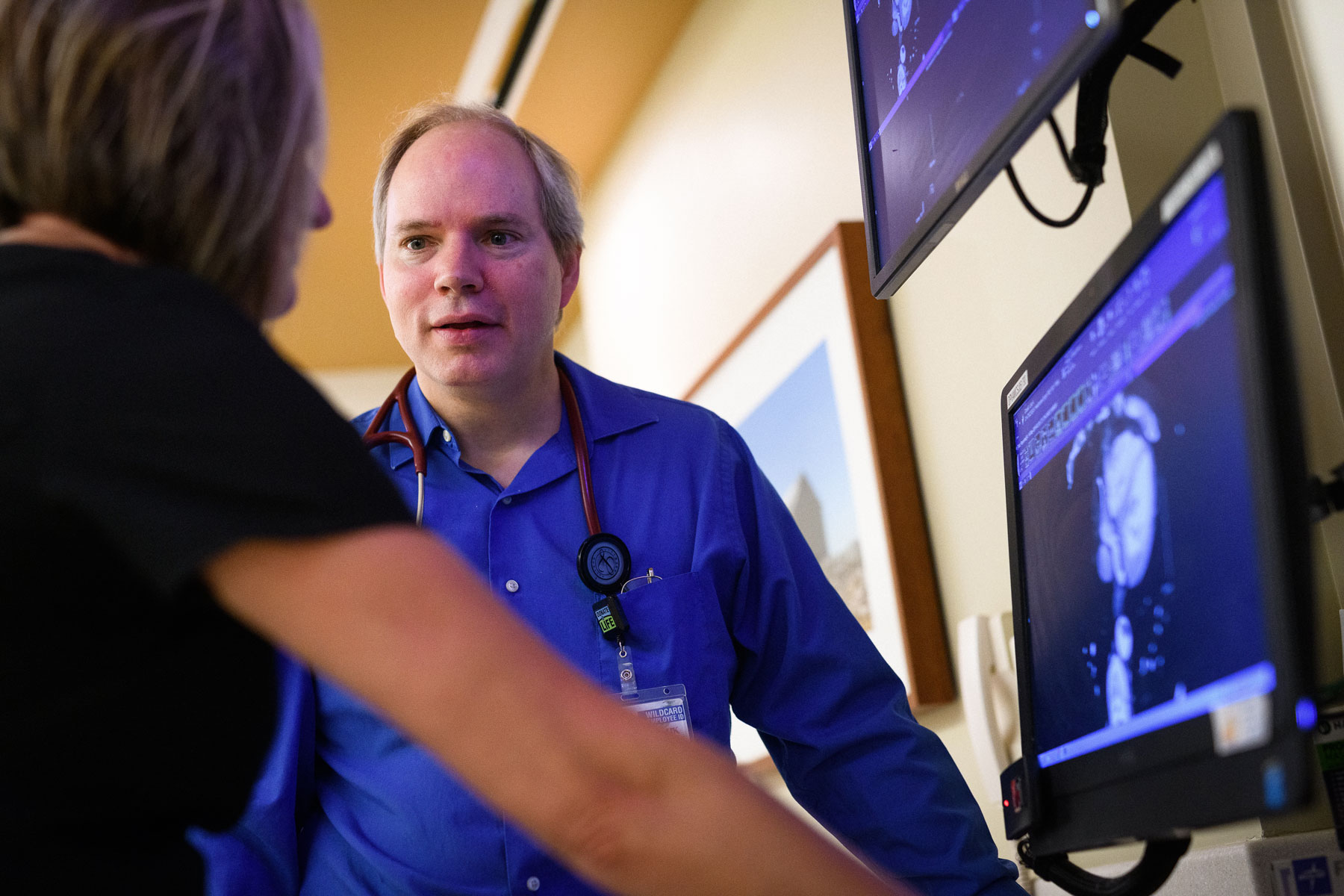 “She was in a lot of respiratory distress,” said Dr. Anstead, who oversaw Breanna’s transplant.

The road to transplant wasn’t easy. Before she could get on the transplant list, she had to regain enough strength to walk 300 steps: a research-backed benchmark that led to much better patient outcomes in transplant patients. After relearning to walk, she was matched with a set of donor lungs—but they were rejected by her surgeons and the transplant was cancelled. The setback was heartbreaking for Breanna and her family. 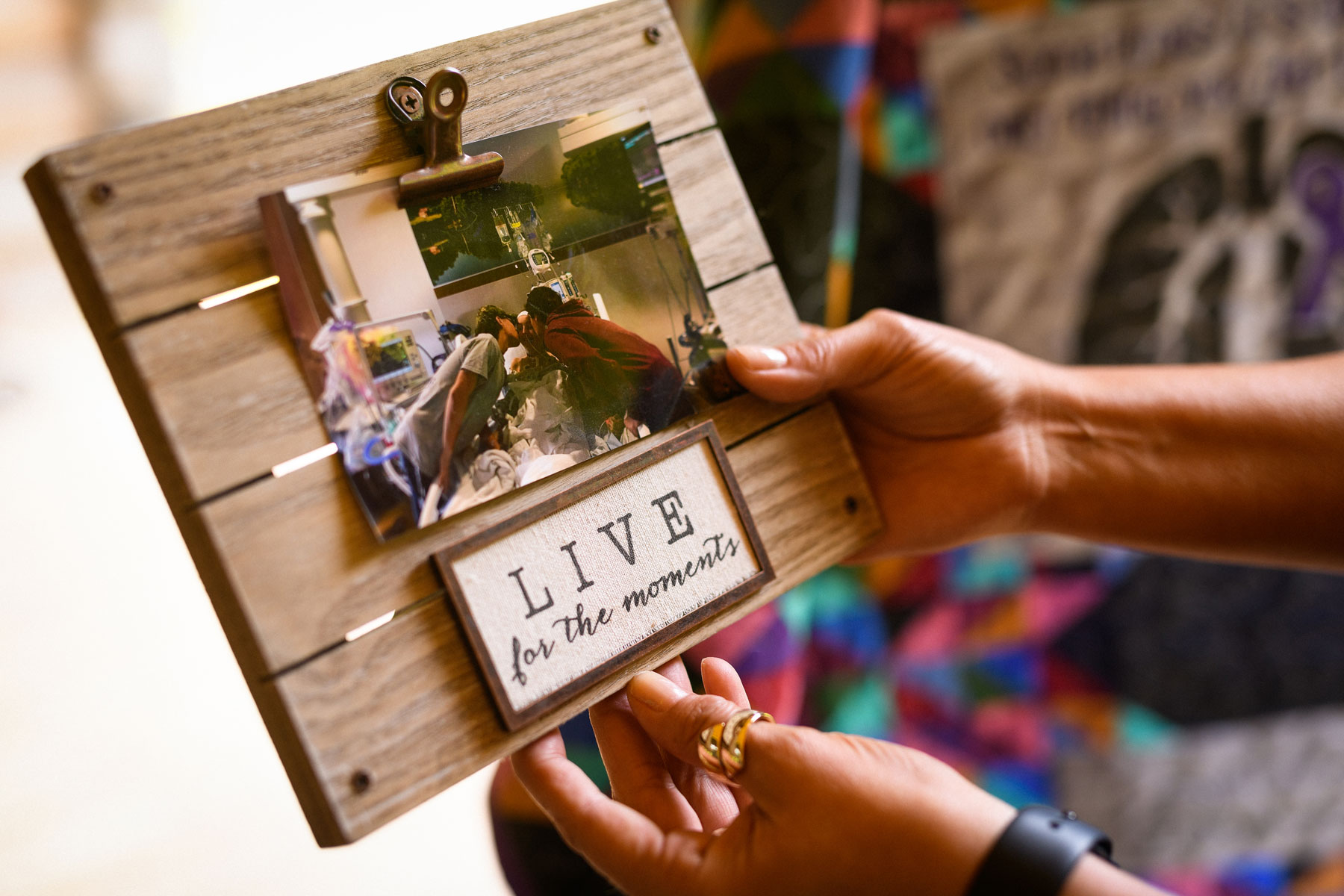 Breanna’s twin brothers, who both have cystic fibrosis, supported her during her long hospital stay.

“I heard this little voice in my head that said, ‘Tell them you’re going to be okay—that you’re not going anywhere,’” Breanna said. “That’s what I did. I told my dad, ‘It’s going to be okay. I can hold on a little bit longer.’” 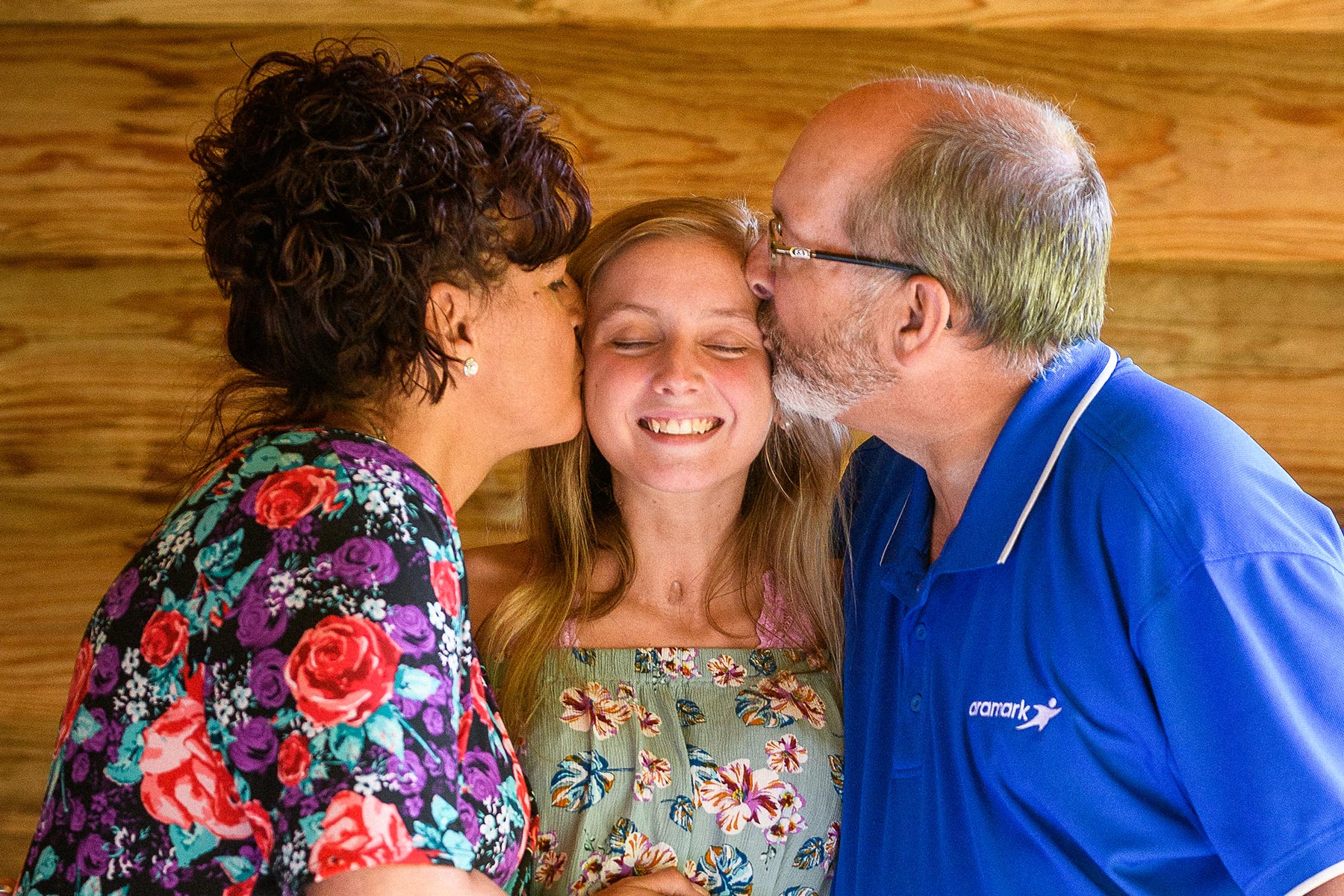 Breanna’s parents, Debra and Dave, were by her side through the ups and downs of the transplant and rehab process.

She was right in more ways than one. She could hold on, and only took a little bit longer—two days later, Breanna was matched with another donor. This time, her long-awaited transplant surgery went off without a hitch. 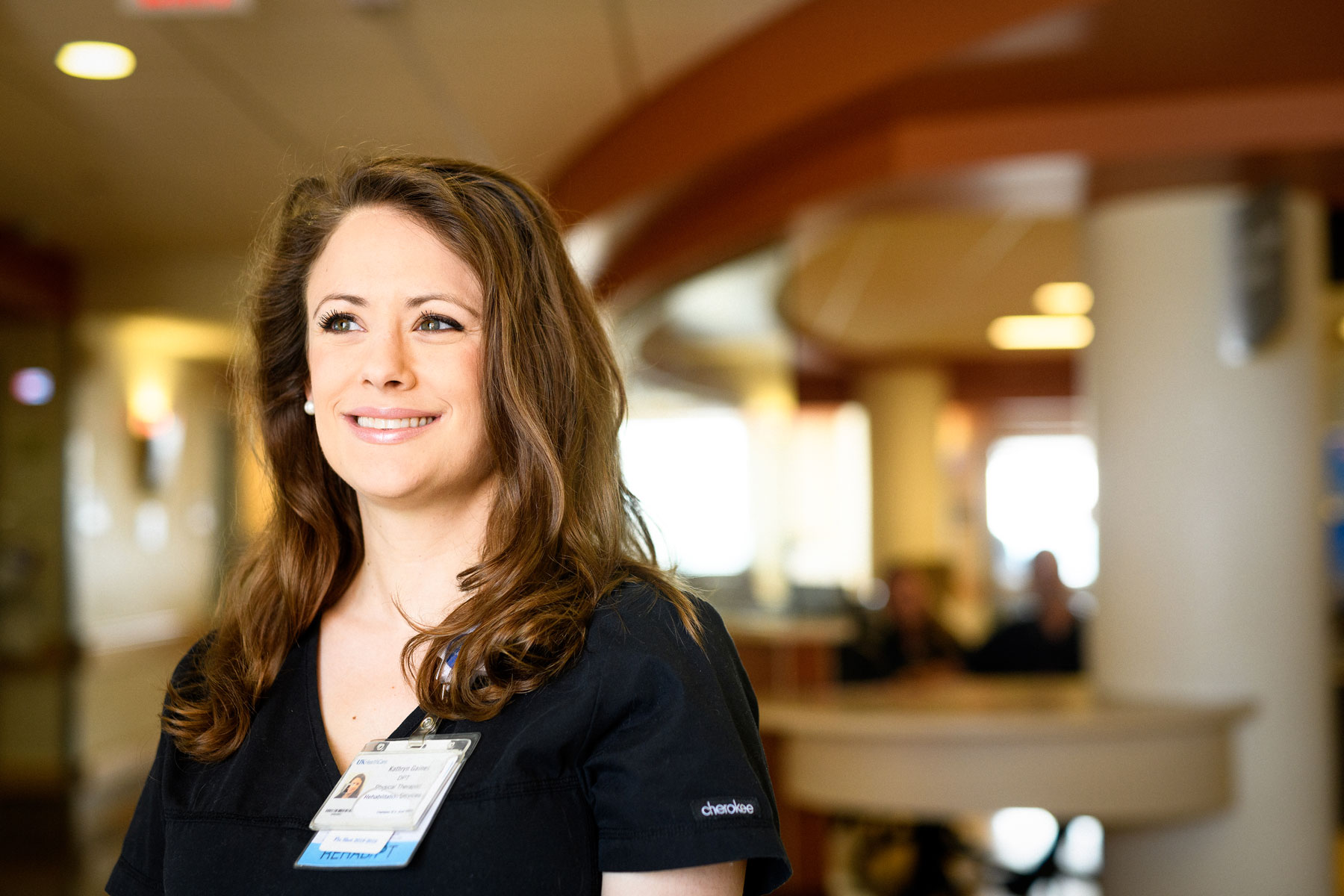 Physical therapist Kathryn Gaines helped Breanna re-learn how to walk in order to qualify for a transplant.

Breanna was expected to sleep for two days after the surgery. True to form, she shocked her doctors, waking up within hours. “The doctor came in and said, ‘What in the world? How are you awake already?’” she said. “I told them, ‘I’m not tired. I don’t need to sleep.’ They told me that in order to get out of the recovery room I had to walk. So I did; I walked half of the hallway with my dad.” 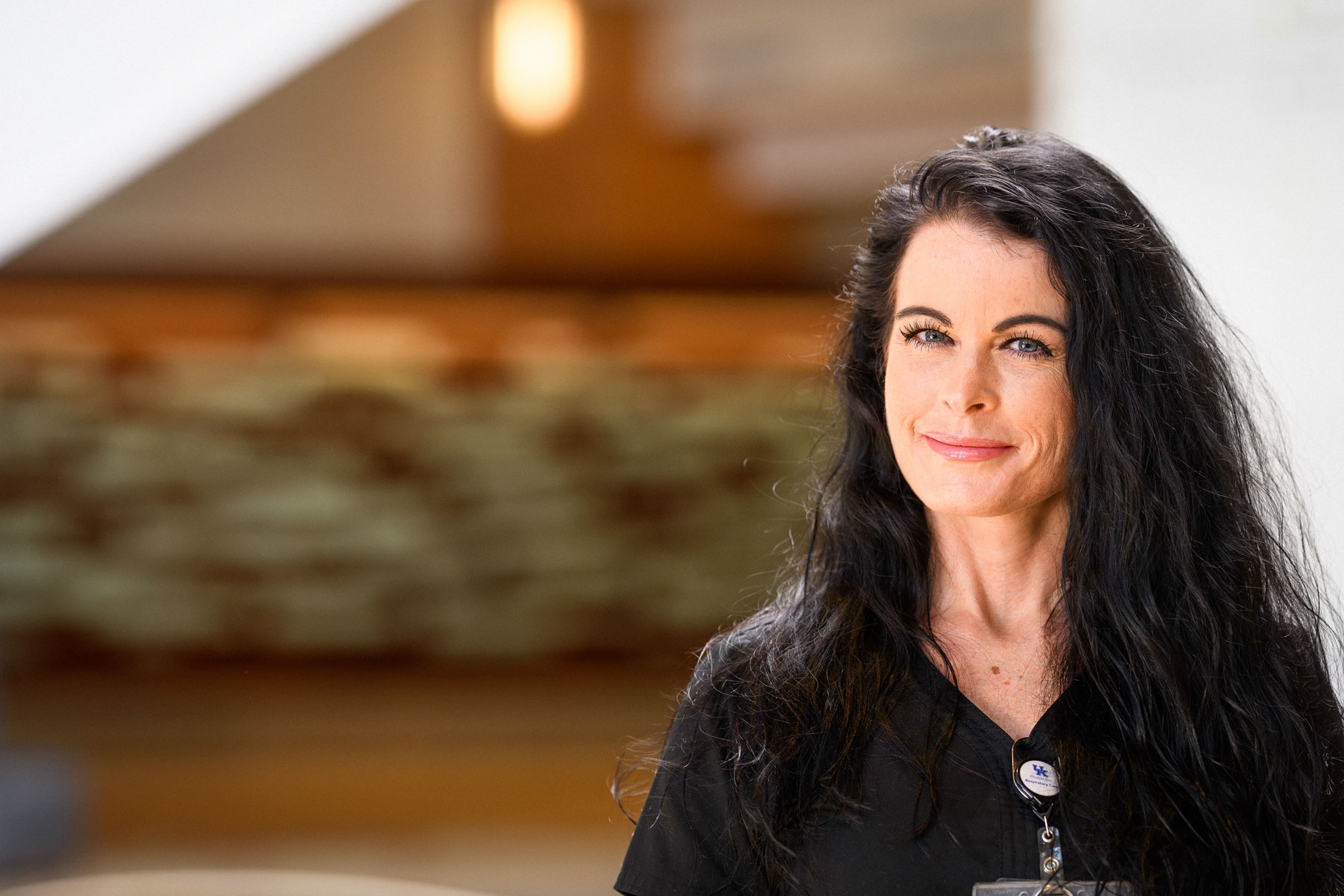 “She was on the go after her transplant, ready for the next phase,” said Dr. Maher Baz, medical director of lung transplant and Breanna’s new primary physician, post-transplant. “She’d say, ‘I need to get back on my feet, learn my meds, learn how to take care of myself. I have things to do now.’” 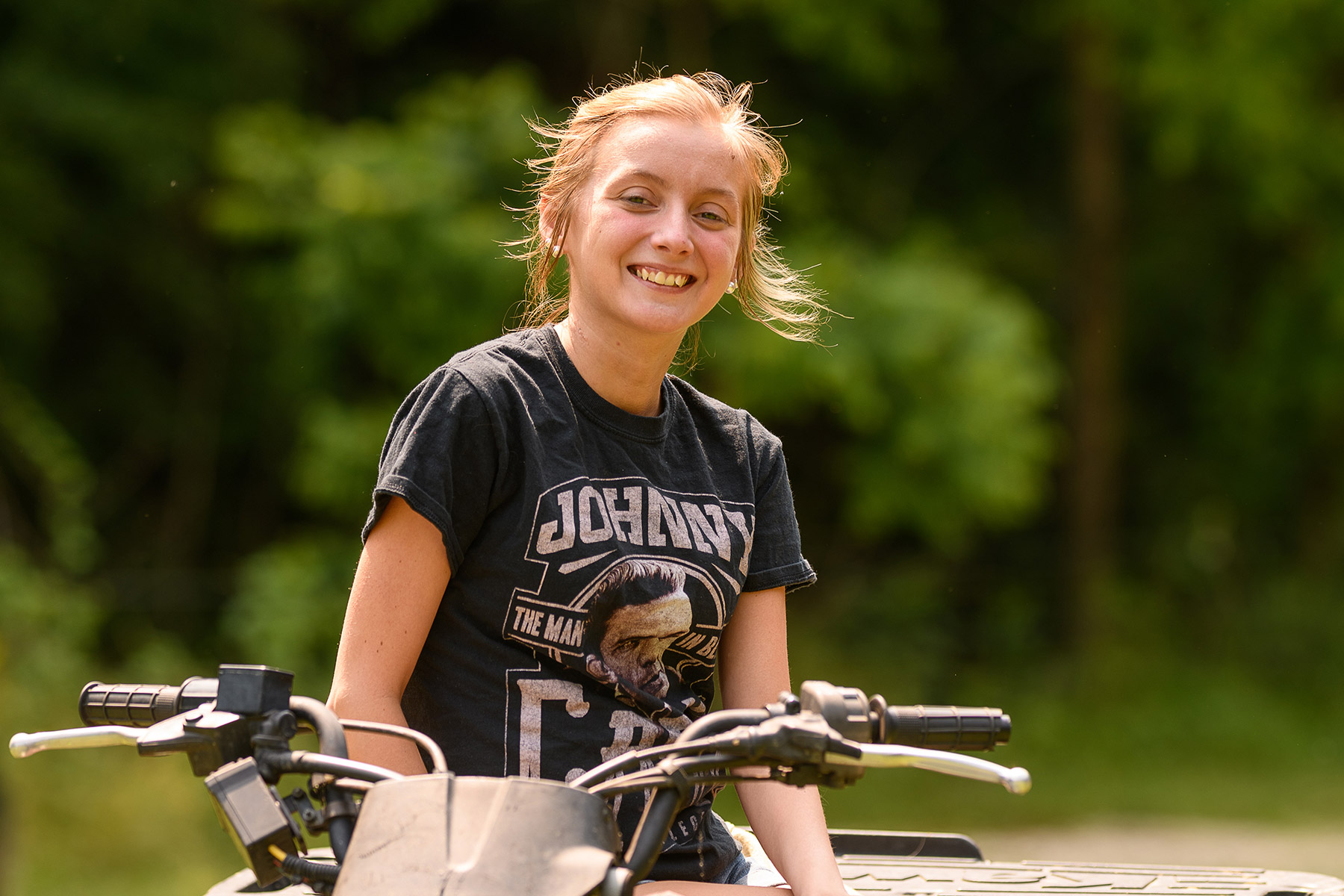 “She’s a firecracker who won’t let anything stop her.”

With her transplant more than a year behind her, Breanna is enjoying making up for lost time. “I can play basketball,” she said. “I can run with my friend’s little girls and keep up with them. I can be outside and be around animals and not have to worry anymore. I can get out and live.”

See how we care for patients like Breanna at the
UK HealthCare Transplant Center.

The Saga of Stinky MonkeyPediatric Services

“Something’s wrong with our baby. We need to go to UK.”Pediatric Services