The Saga of Stinky Monkey

“There was a little boy out there crying because he missed his monkey. And we could do something about that. Or at least we could try really hard.” 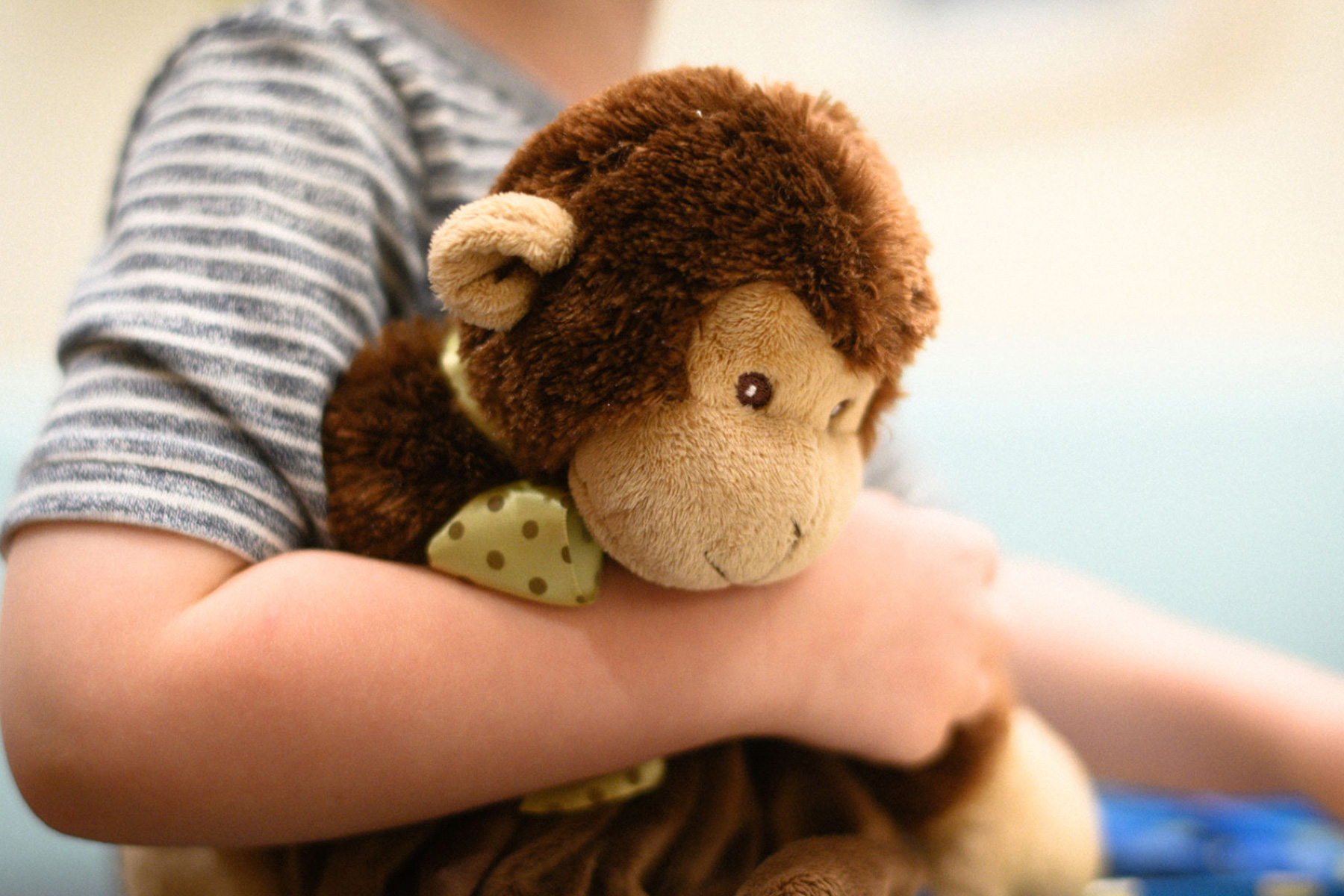 Ezra Yost’s best friend is a toy named Stinky Monkey. They’ve been inseparable since he was born, three and a half years ago. So when Ezra’s family needed to travel from Indianapolis to Lexington for a surgery for his little brother, Arlo, Stinky Monkey obviously came along. 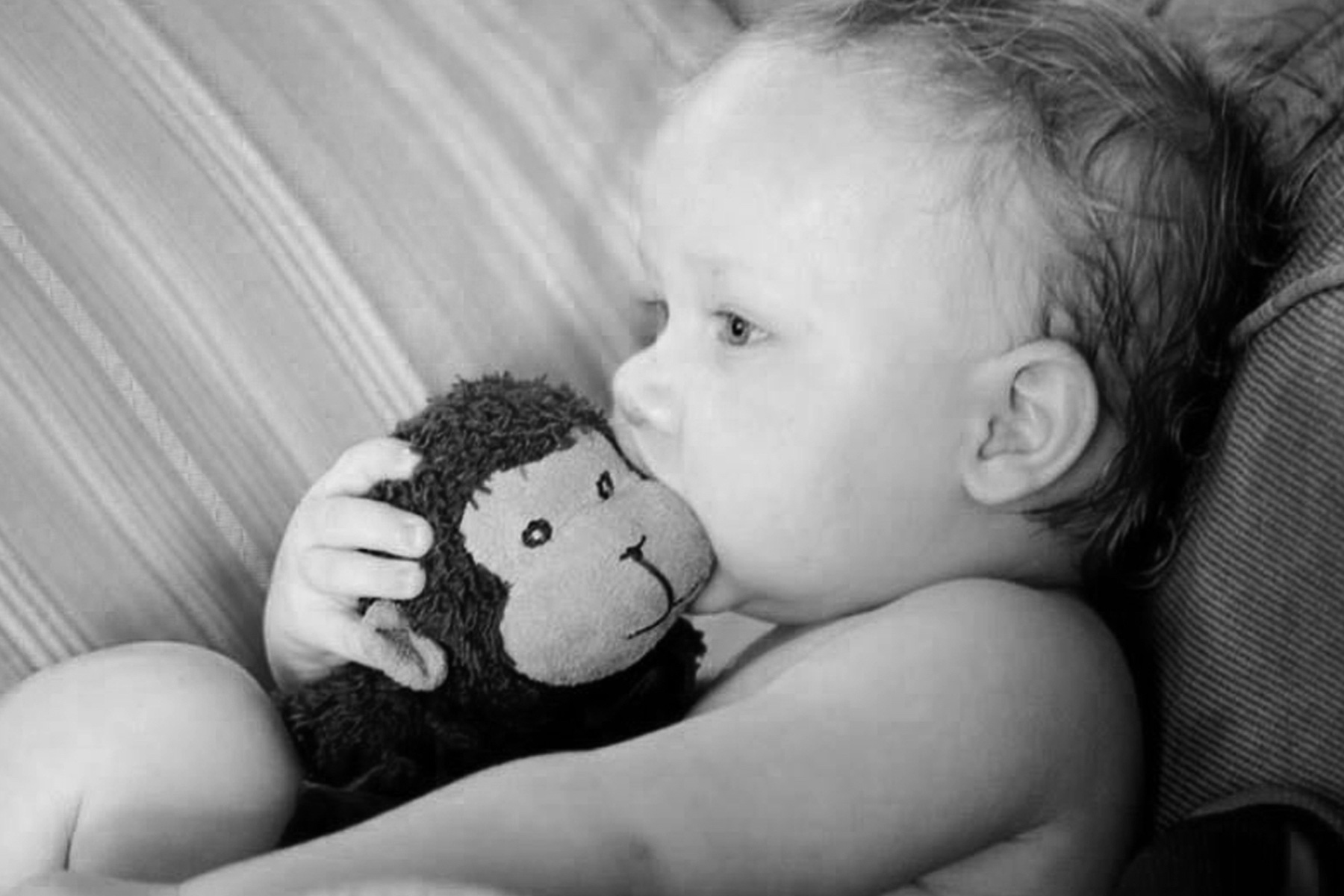 “It’s his comfort item. He got the name Stinky because Ezra constantly chewed on him.”

Arlo’s surgery was a long one—he was born without a fibula, a condition called fibular hemimelia, and the surgery that day involved amputating most of his foot. A dozen family members accompanied the Yosts to the hospital to support them and watch Ezra. 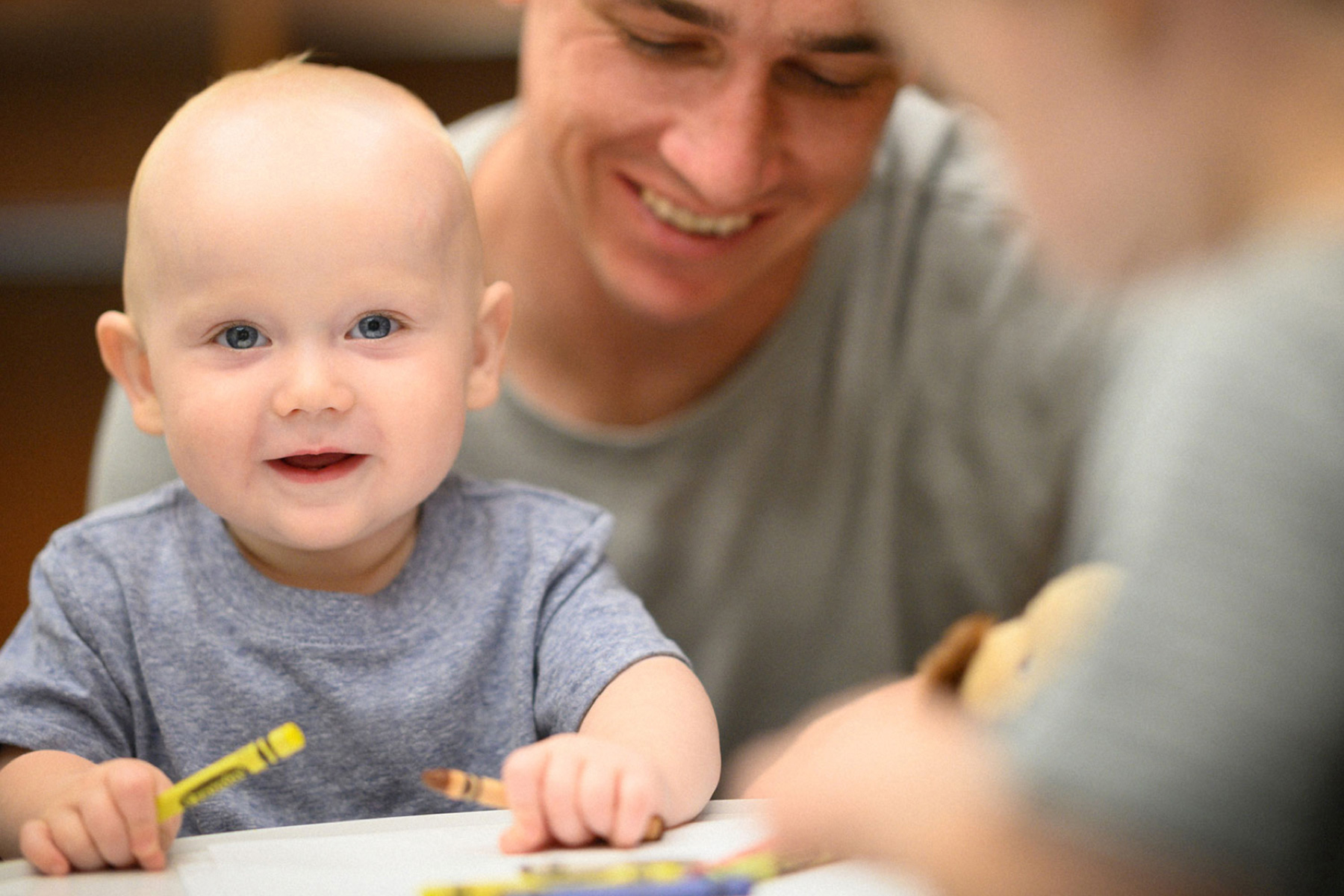 Eleven-month-old Arlo is just as active, happy and fun-loving as his big brother Ezra.

Somewhere during the course of the day, Stinky Monkey went missing, and the family had to return to Indianapolis without him. Ezra was heartbroken. “Those first few nights without him, Ezra was crying endlessly,” said Ezra and Arlo’s mom, Emily. “We’ve been so focused on Arlo, obviously, with around-the-clock pain management, and I felt terrible.” 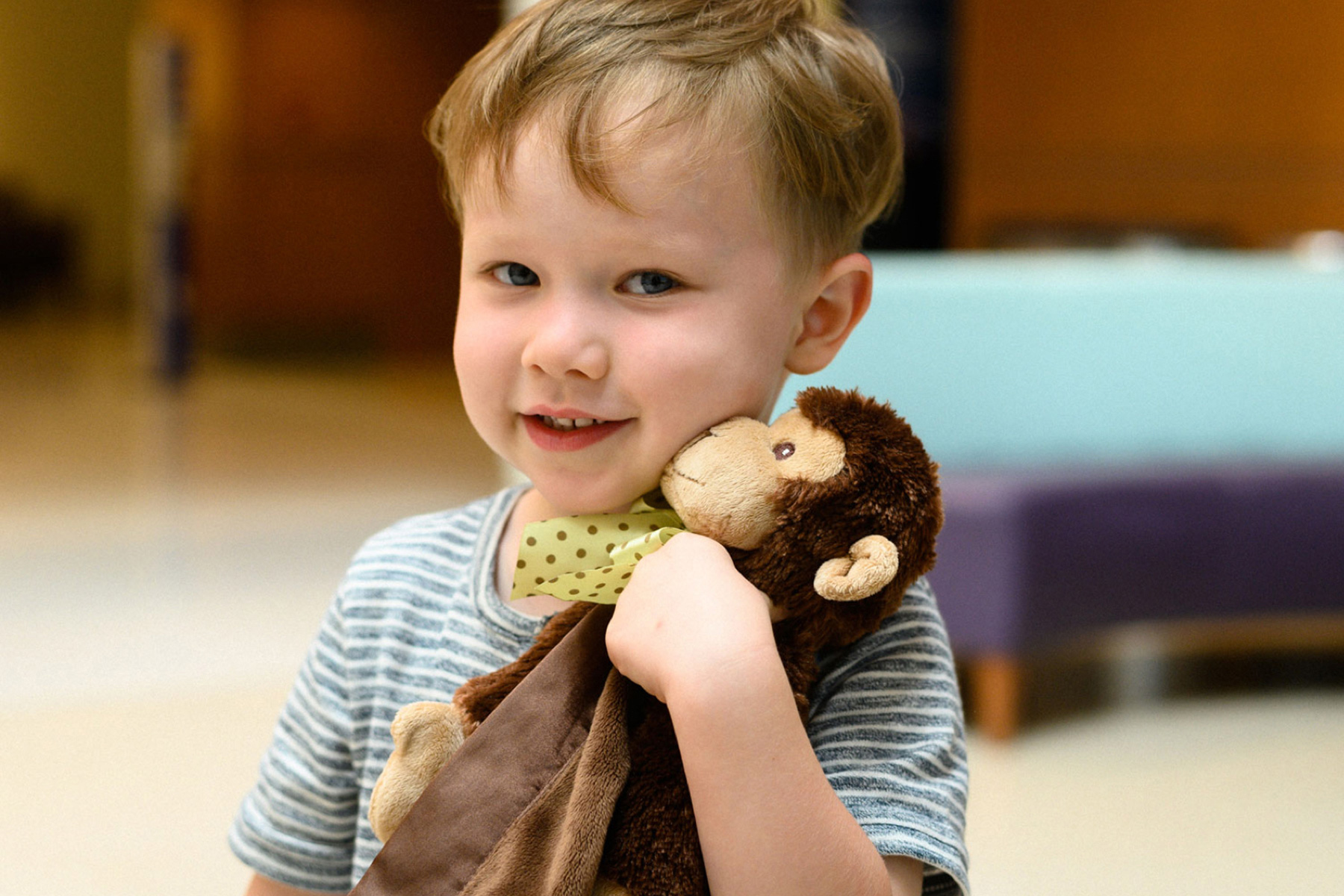 “Ezra is so compassionate and loving,” Emily said.

Emily contacted a local news station to get the word out about Ezra’s missing monkey. After the story went viral, word got back to Daun Wickline, who manages UK HealthCare’s gift shops. The story of the heartbroken little boy grabbed at her, and she took it on as a personal mission. After checking with everyone from the laundry to the janitorial staff, she realized she might not be able to find Ezra’s original monkey—but she could try and replace him. 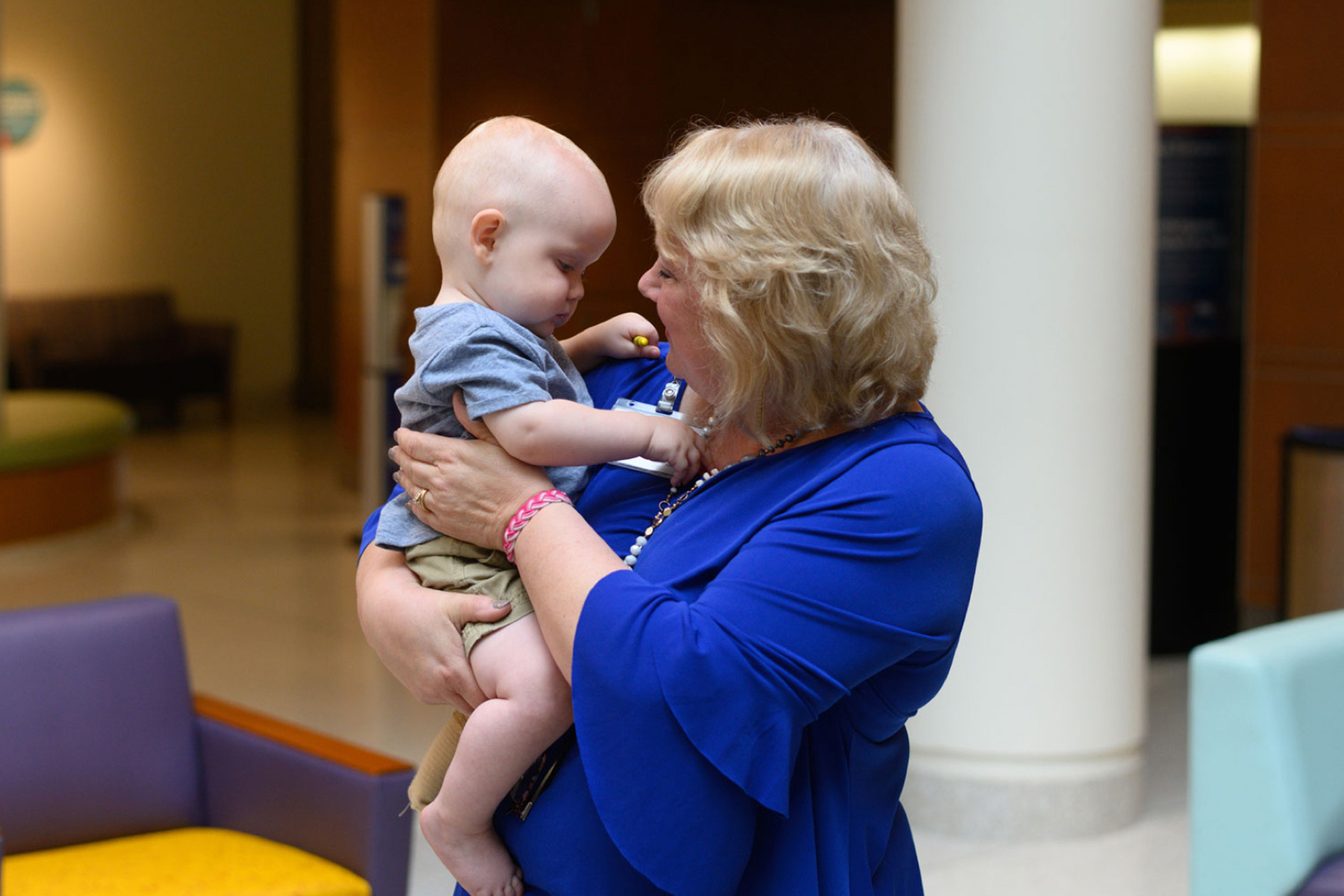 Daun gets some quality time with Arlo after a follow-up appointment at Shriner’s.

Recognizing the toy as one she’d stocked at the store before, she called the manufacturer, only to find that Monkey had been discontinued. She asked them to check the warehouse—no luck. She finally found a store in Georgia that had two monkeys in stock, and asked them to monogram one and overnight it to the Yosts. But there was still a problem: how would they explain Monkey’s brand-new appearance to Ezra? 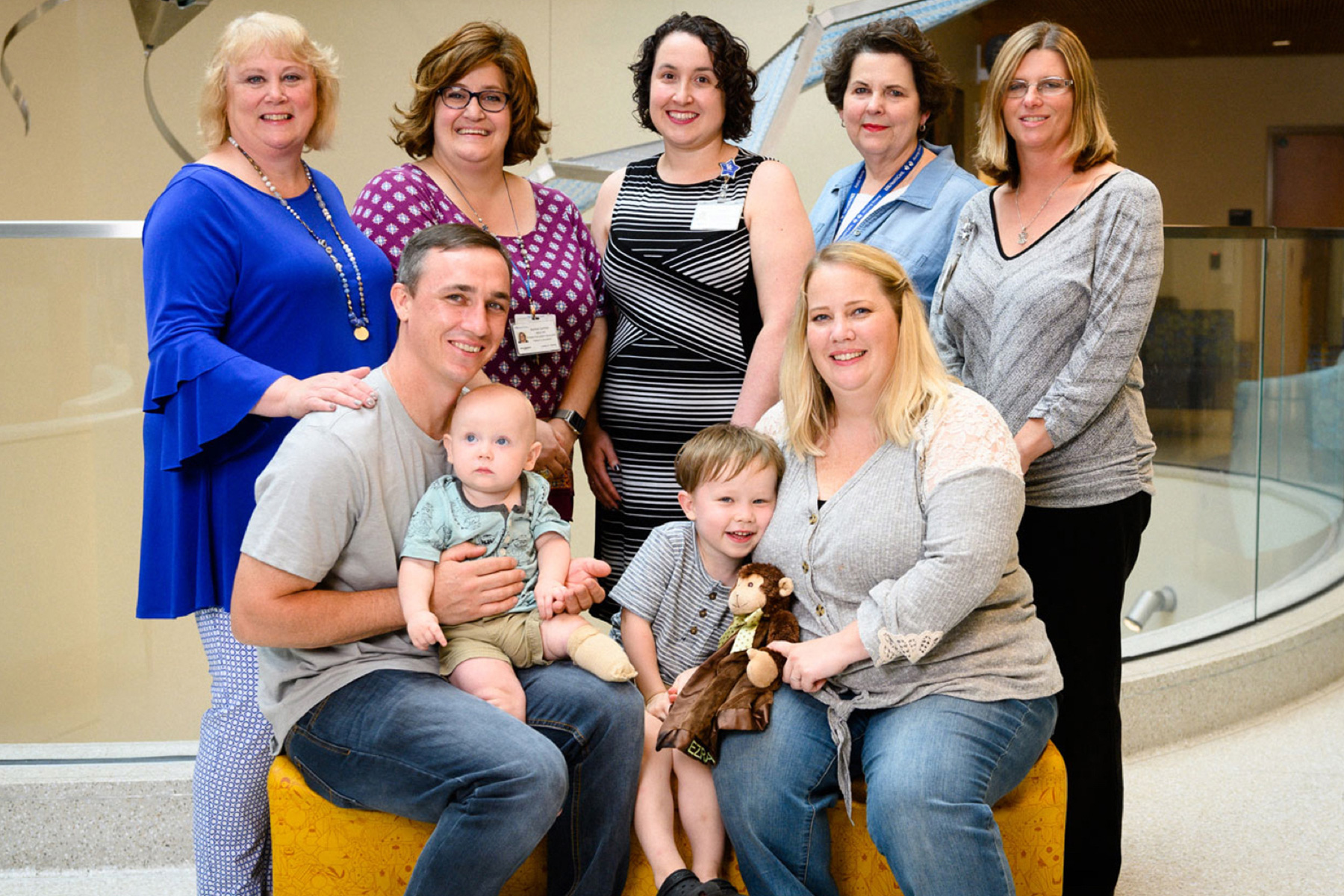 “It takes a whole team, and that's what UK is about,” Daun said. “It takes a group to accomplish what we do.”

That’s when Daun and her coworkers came up with a plan. Korinne Callihan, who works at Kentucky Children’s Hospital’s Health Education Library, emailed Dr. Erich Maul, Chief of Hospital Pediatrics, to see if he would record a video to send to Ezra ahead of the return of his monkey. 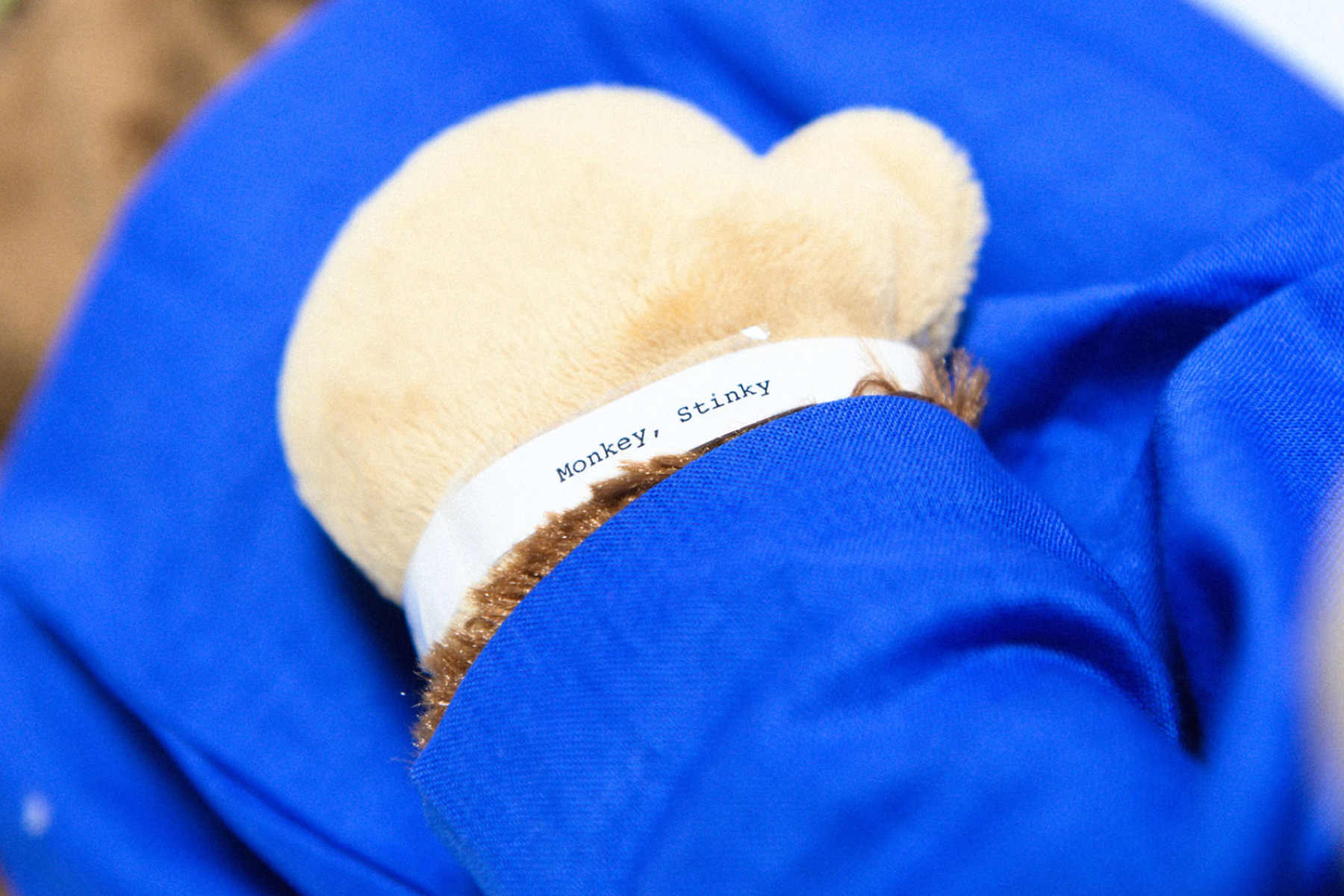 Just like Arlo, Monkey is now a part of the Kentucky Children's Hospital family.

“She said, ‘Hey, we want to do something for the little boy who is Stinky Monkey’s best friend,’” said Dr. Maul. “‘Would you come and say he got stuck here for a little while, and we needed to give him a little tune up?’ And I said ‘Oh yeah, I’m all in.’ I love doing stuff like that.” 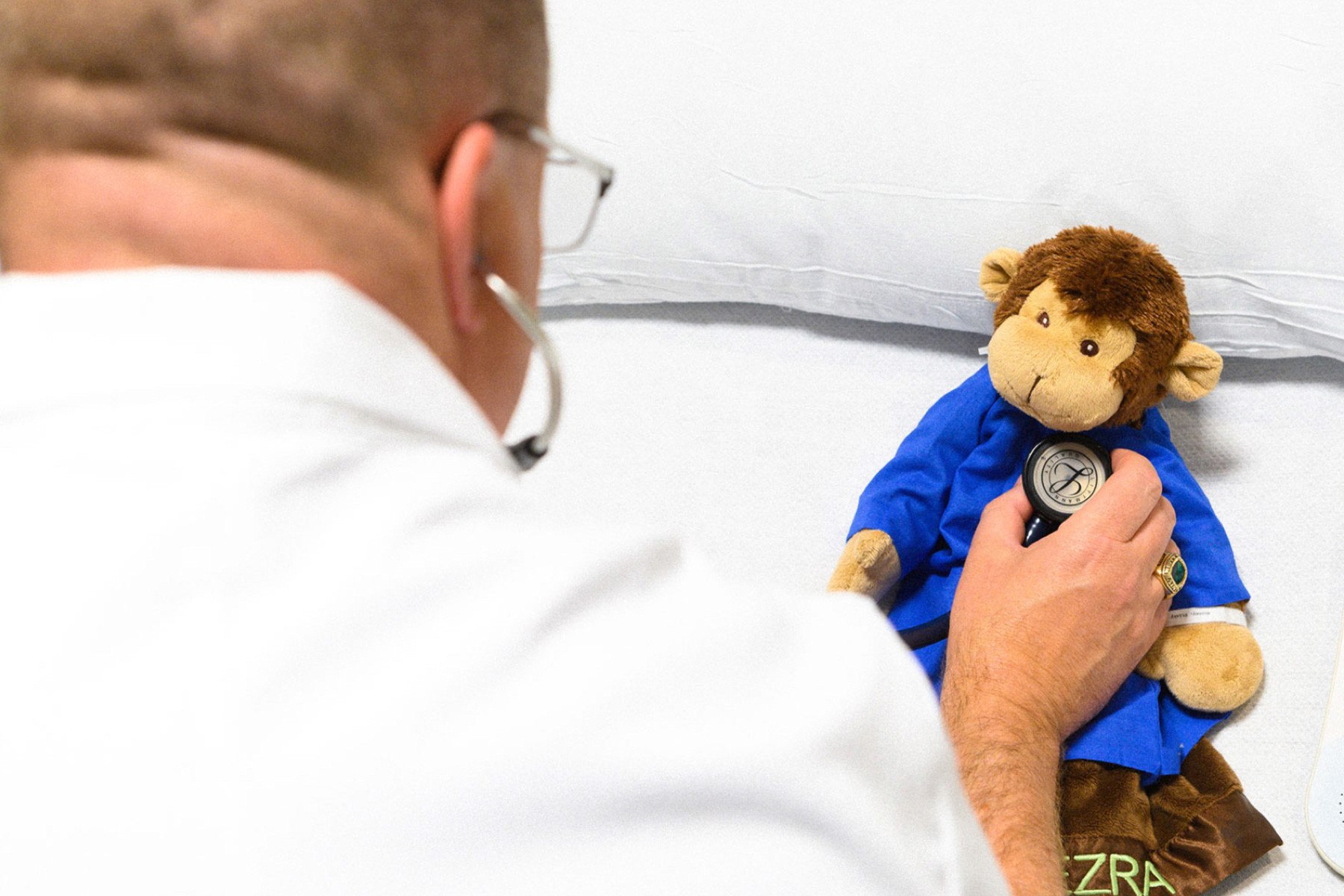 “There are so many times, as a pediatrician, that we do things to kids that they just don’t like,” said Dr. Maul. “Anytime we can go and do something that is fun that lets us act like a kid, that’s part of the reason we go and become pediatricians in the first place.” 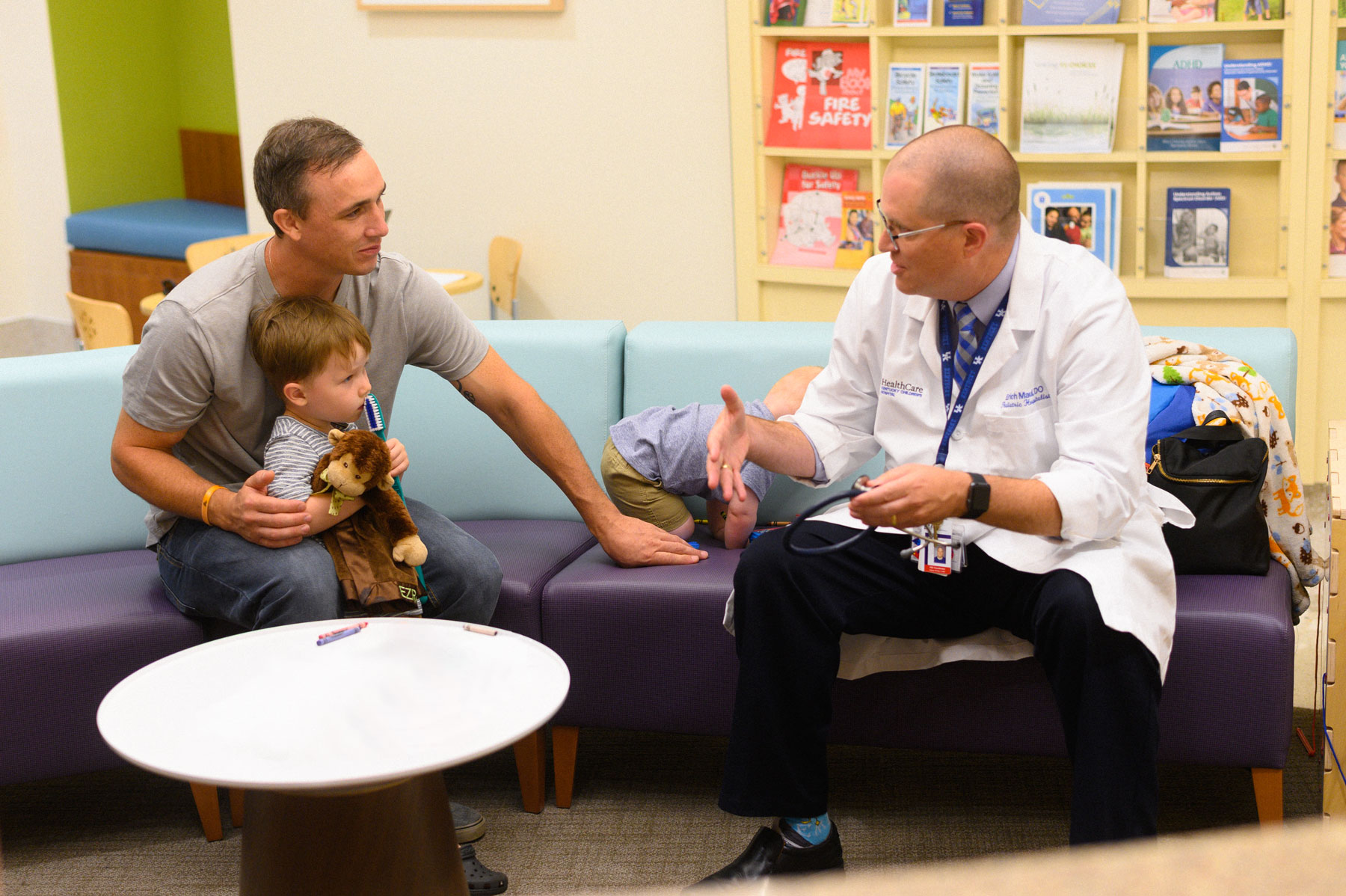 Ezra watched the video hundreds of times as he waited for the return of his monkey, which was hand-delivered by the Yosts’ postman the next day. Monkey’s return was made possible by dozens of people coming together, from hospital staff to a Georgia shopkeeper to the wider Lexington community who made the story go viral. For the Indianapolis-based Yost family, the experience underscored what made them choose Kentucky Children’s Hospital. 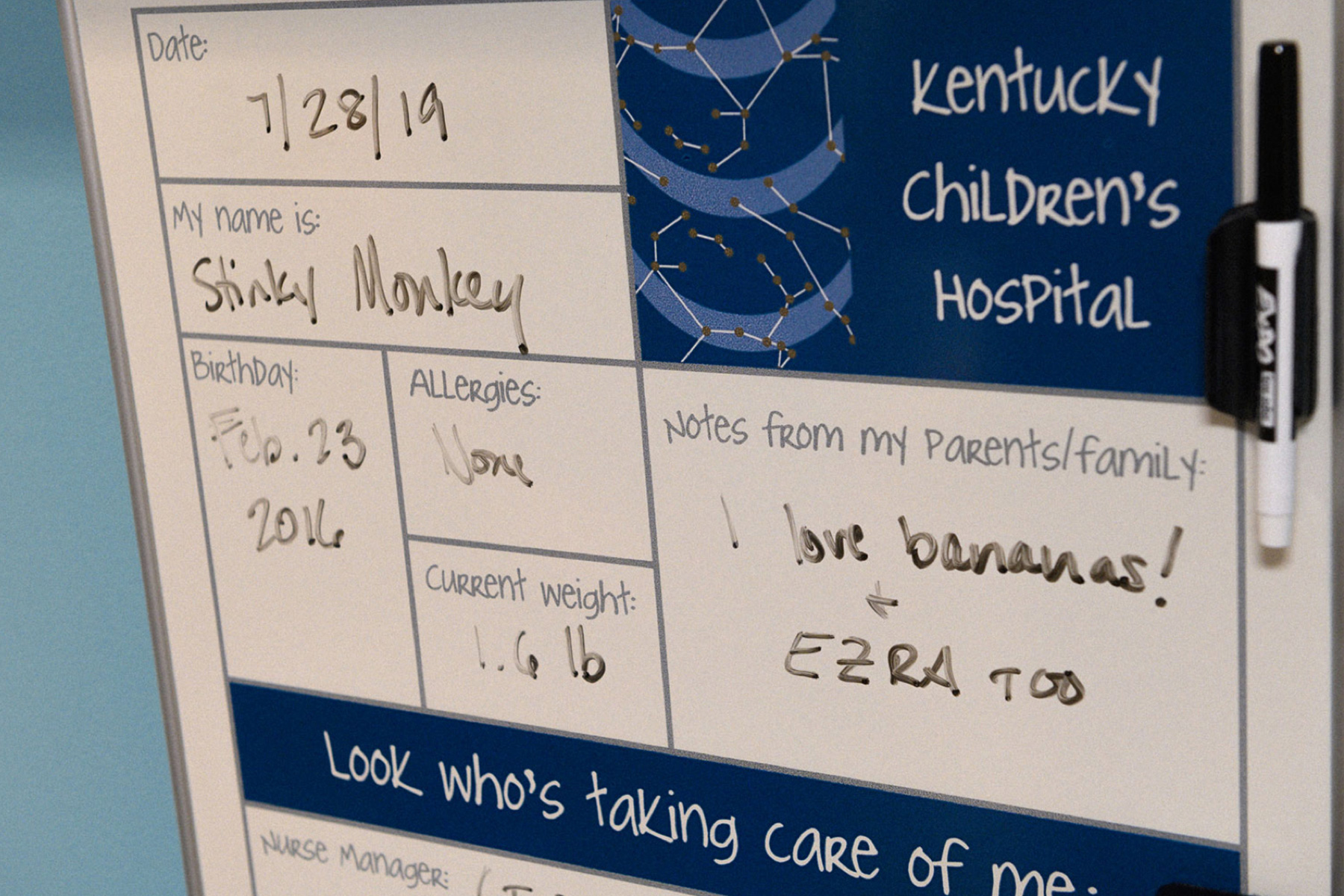 “In the long run, it made a little boy and a mom feel better, which is what we were hoping for.”

“We went everywhere. But nothing felt quite right until we came here,” said Ezra and Arlo’s dad, Tyler, about their search for the perfect hospital for Arlo. “We just felt welcomed. The doctors here are amazing. Daun, she was amazing. The love we’ve received from this whole hospital and the community has just been amazing. This whole experience has been heartwarming, and a reminder of how great people can be.” 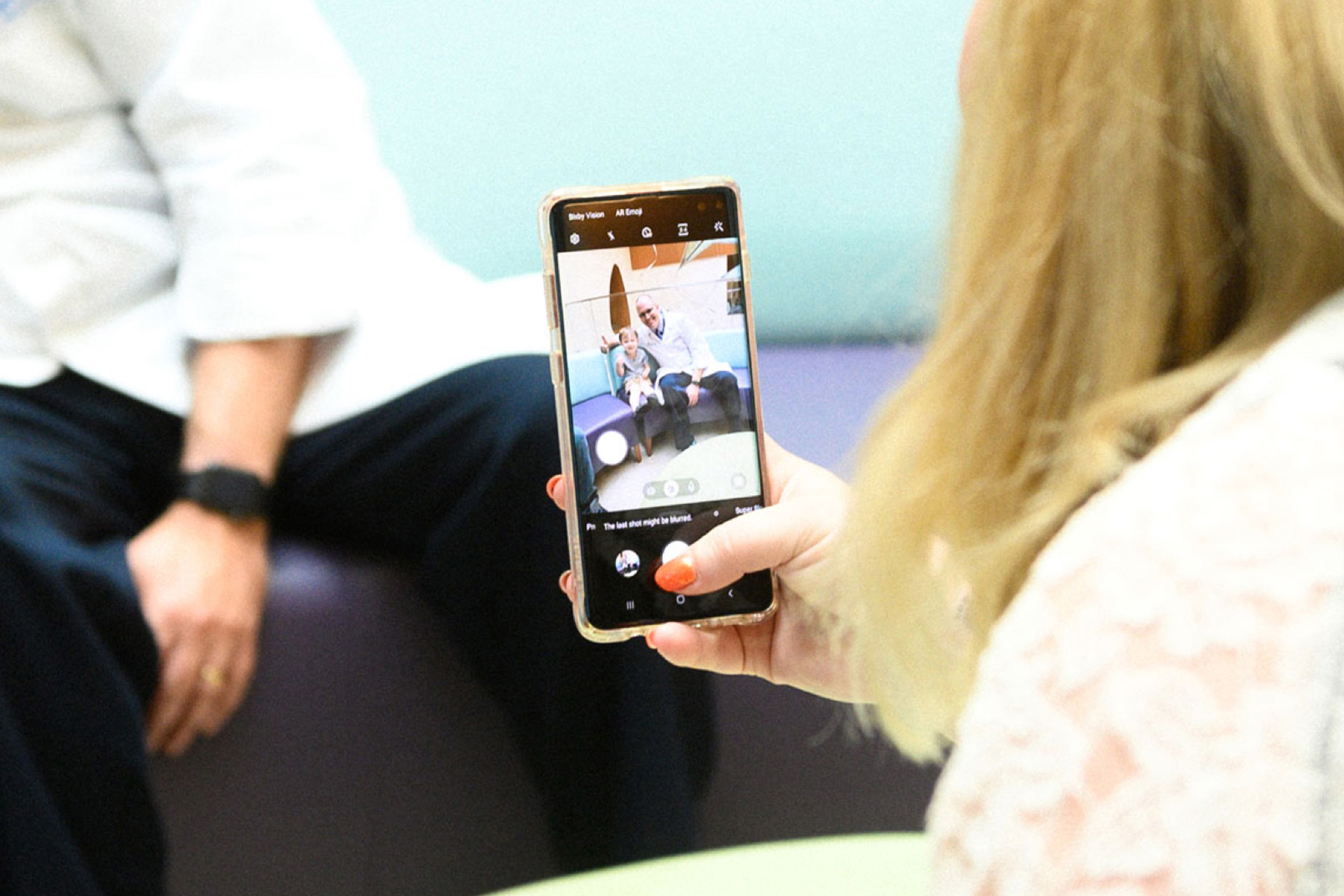 “The outpouring of love we got…that’s why we chose this hospital,” said Emily. “They’ve gone above and beyond to show us so much love and support, beyond just Arlo’s medical care. Ezra’s not a patient here, but everything they’ve done for him has been absolutely incredible and a huge relief to our family. It’s just so much more than medical care to me. It’s a real family atmosphere and this is a huge place. So for them to do that for just one little boy is incredible.” 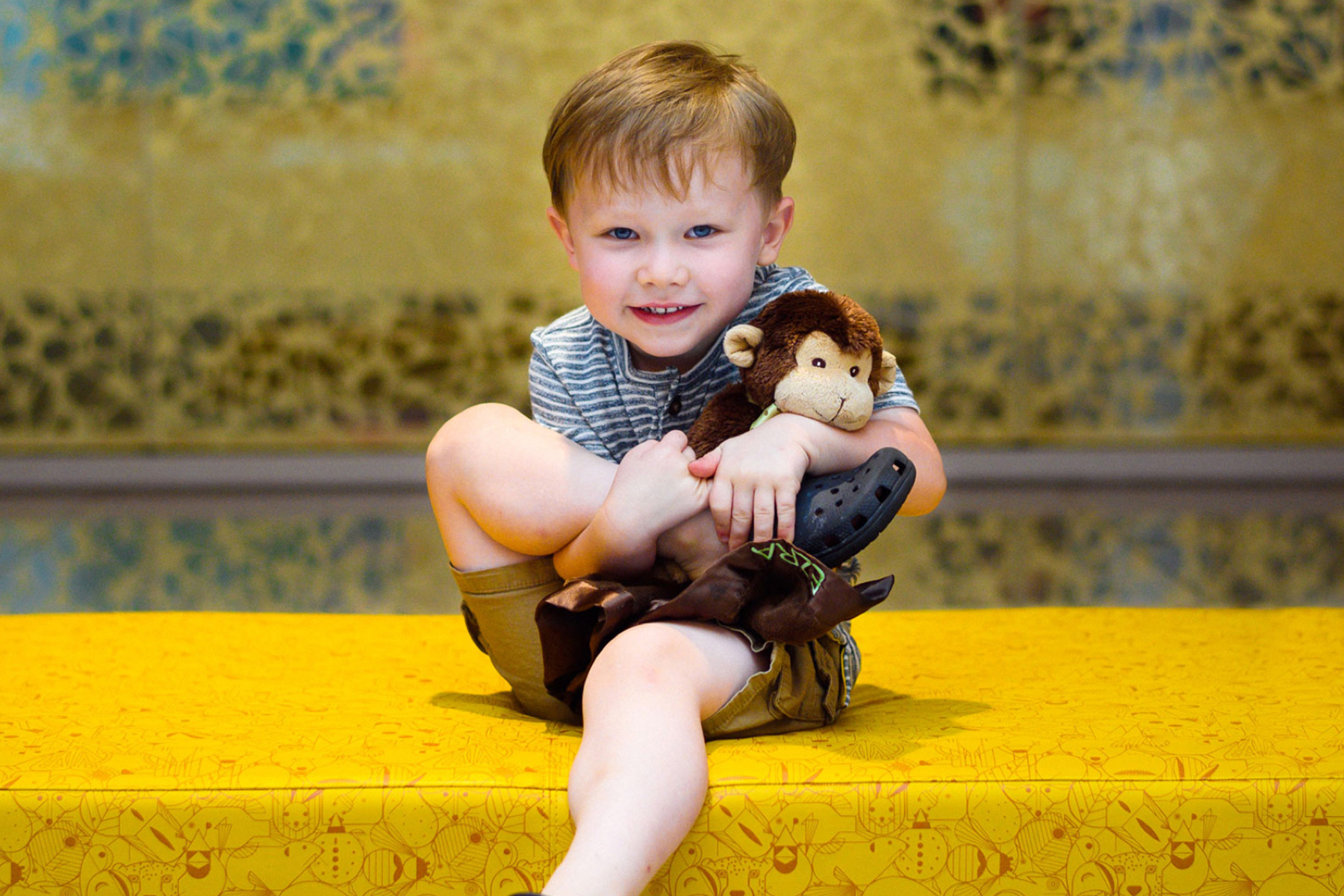 “It's just absolutely incredible that with everything they have going on, so many people took that time to do this for Ezra.”

Learn more about how we care for families like the Yosts at
Kentucky Children’s Hospital.

Fighting Diabetes as a FamilyDiabetes, Moms

A Spitfire and a SurvivorPediatric Services, Transplant