Building a Shoulder from Scratch

“I was active duty Air Force, so I had a routine annual visit—nothing going on, healthy as a horse. At the end of my appointment the doctor asks, ‘Is there anything else going on with you that you would like to mention?’ And I said, ‘Well, I have been having dull aches and pains in my shoulder. I think I’m sleeping on it wrong.’” 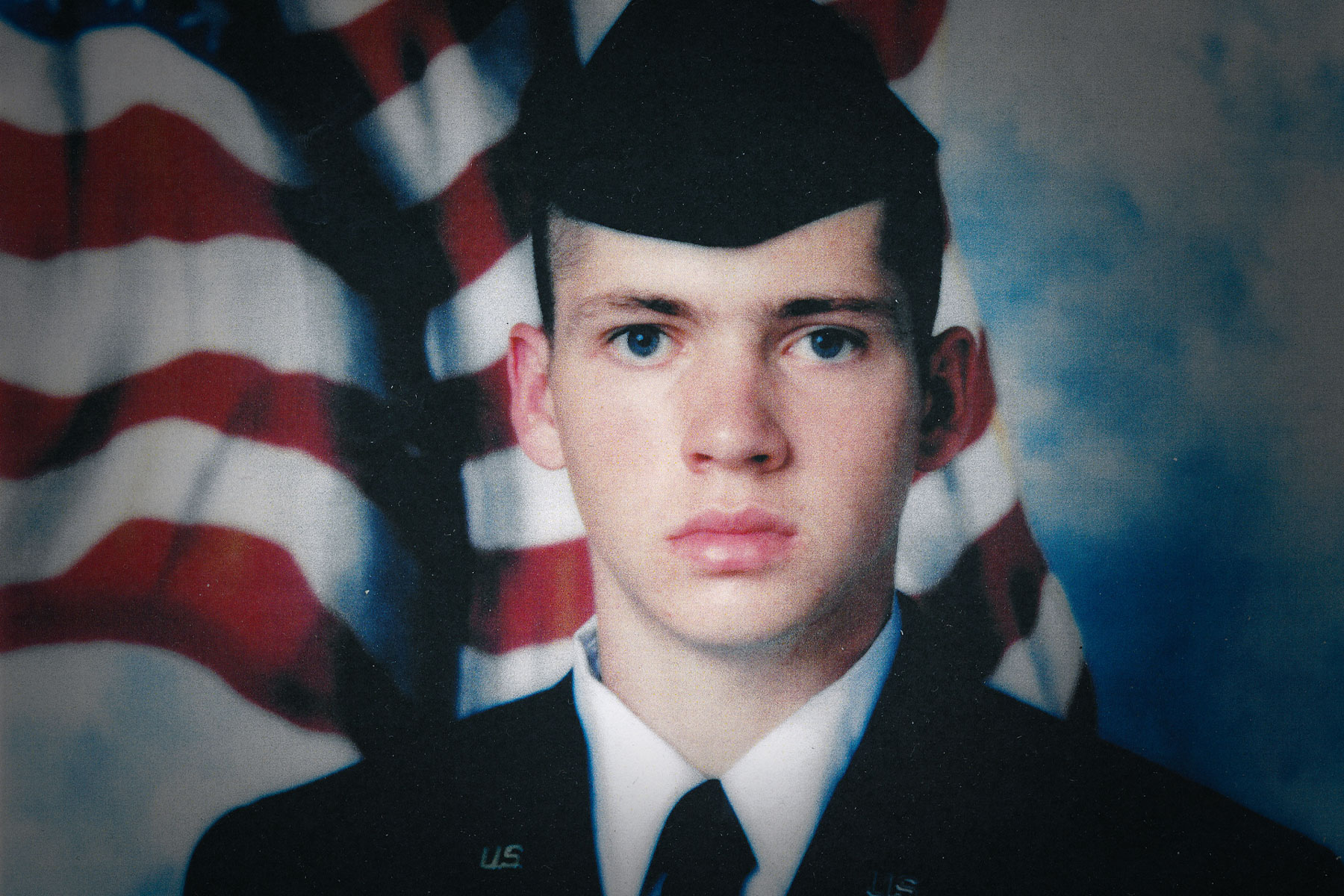 Leonard enlisted when he was just 18 years old. He was diagnosed with cancer five years later.

That dull ache was the beginning of a fifteen-year saga for Leonard Preston. Then a 23-year-old Air Force member, Leonard was diagnosed with chondrosarcoma, a form of bone cancer that starts out in the cartilage. By the time they caught it, Leonard’s cancer had eaten through more than half of his humerus. 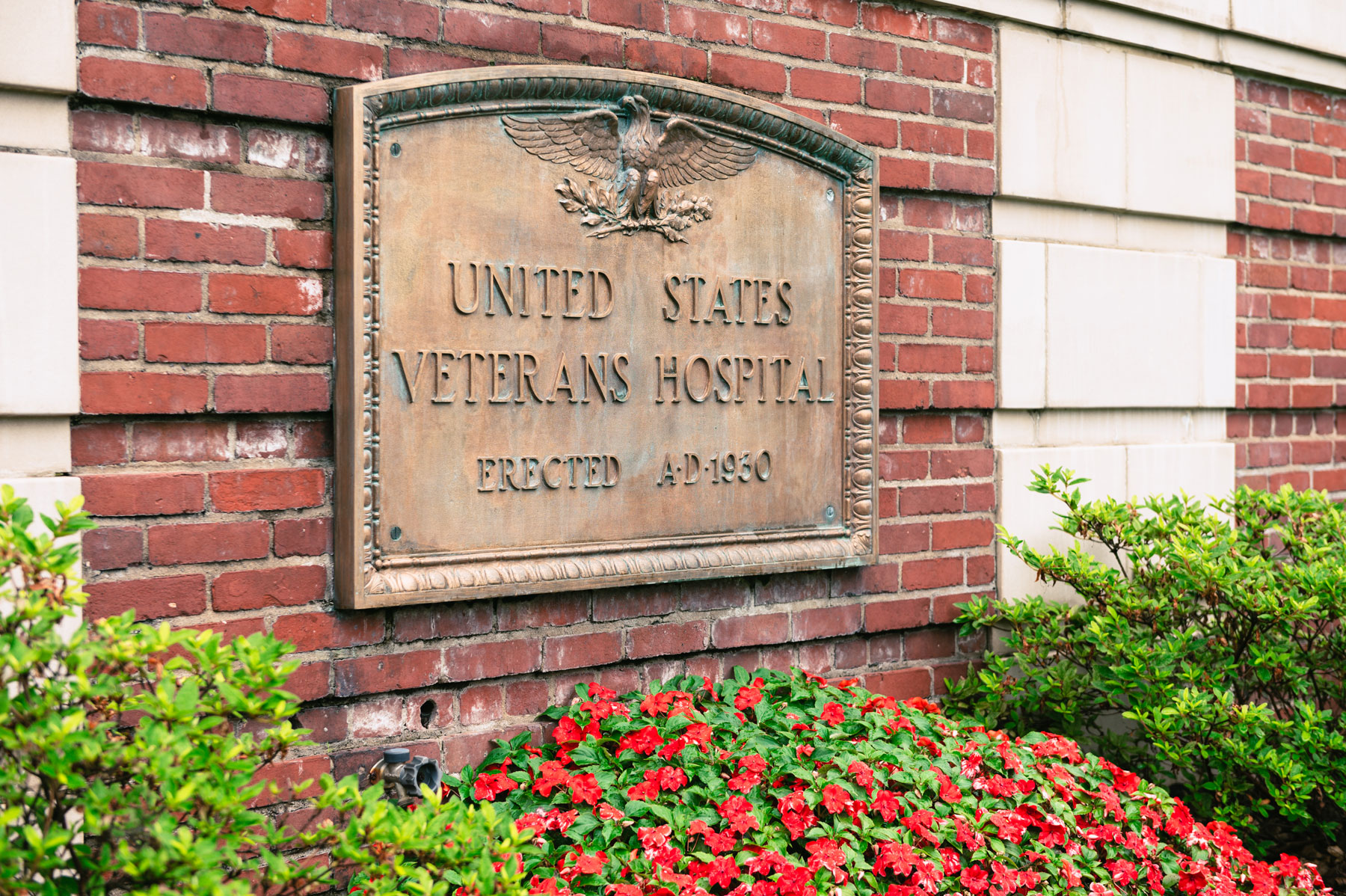 “VA has done so much for me, from my initial surgery to getting me my education. They’ve been a godsend.”

While Leonard’s diagnosis meant he could no longer actively serve, he was transferred into the VA system to receive the first of what would be many surgeries. The damaged part of his shoulder was removed and rebuilt with bone from his leg and hip. While the surgery was successful, a minor car accident three years later broke his rebuilt shoulder. Several more rounds of surgeries and hardware options failed to knit into his system. 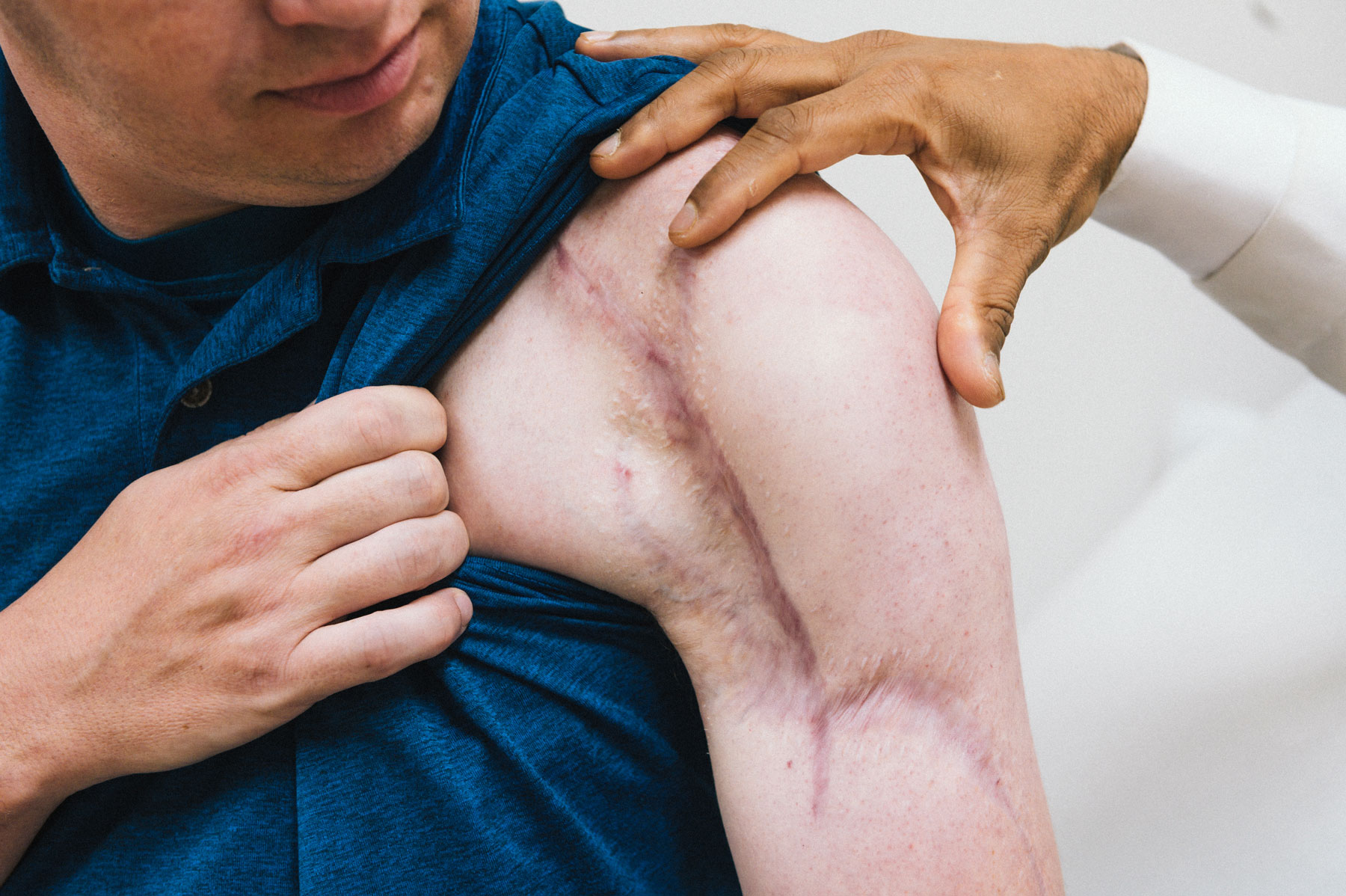 Leonard’s collagen stretches out more than normal, compounding the complexity of his case.

“I had a free-floating metal rod in my arm—I could bend it in all kinds of places because I had no rotator cuff. It was a good parlor trick. Then the metal rod started wearing on my skin, so they cut off that rod and that left an even bigger void in my skeletal system.” 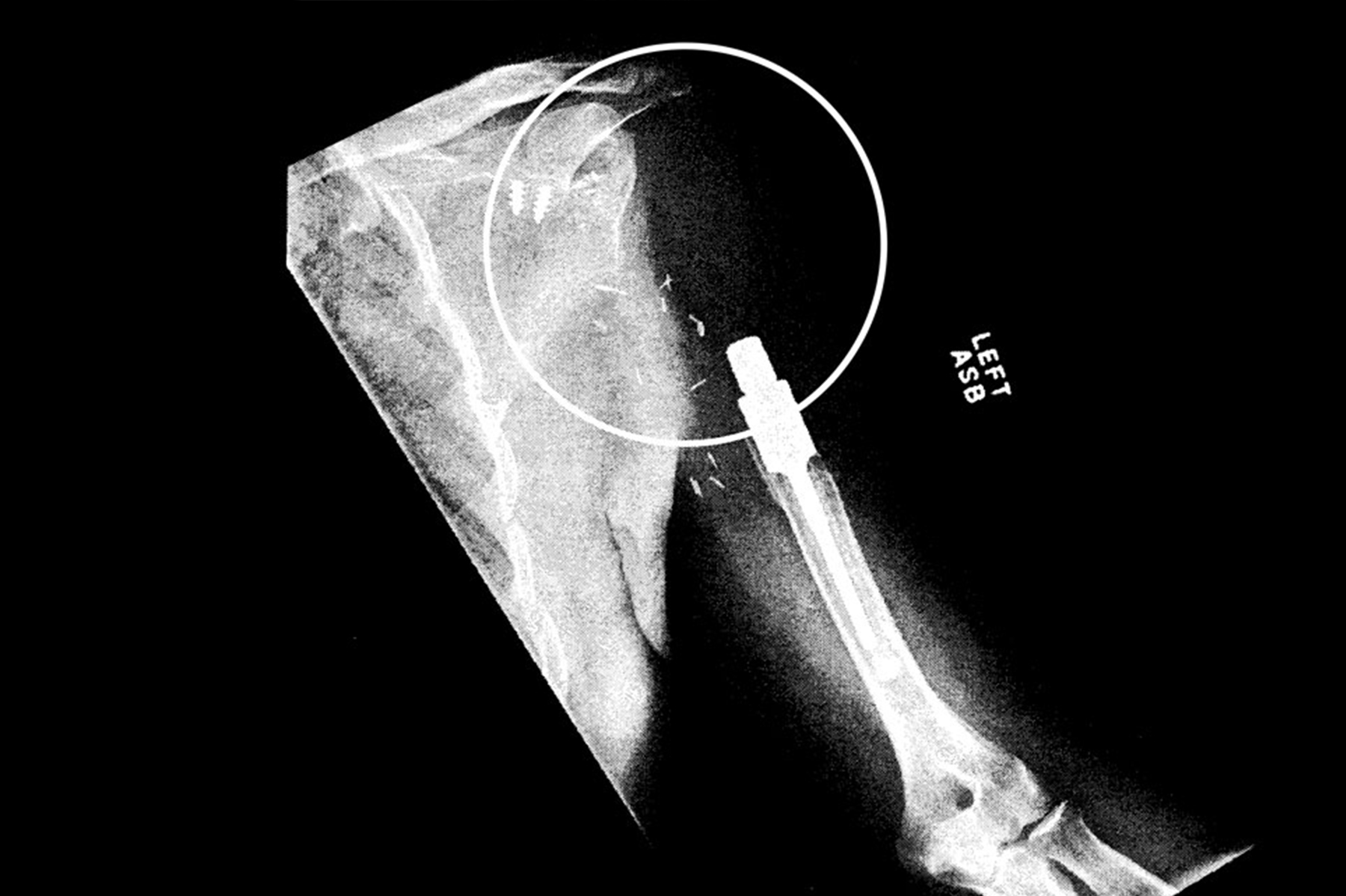 An x-ray of Leonard’s shoulder when he came to UK shows the gap in his skeletal system.

Through VA’s Care in Community Program, Leonard was referred to Dr. Srinath Kamineni, a shoulder and elbow specialist at UK HealthCare’s Orthopaedic Surgery & Sports Medicine. Faced with Leonard’s extensive history and complex case, Dr. Kamineni was able to consult with international colleagues to develop a new approach to rebuilding Leonard’s shoulder. “This is how you put a global network to work,” Dr. Kamineni said. 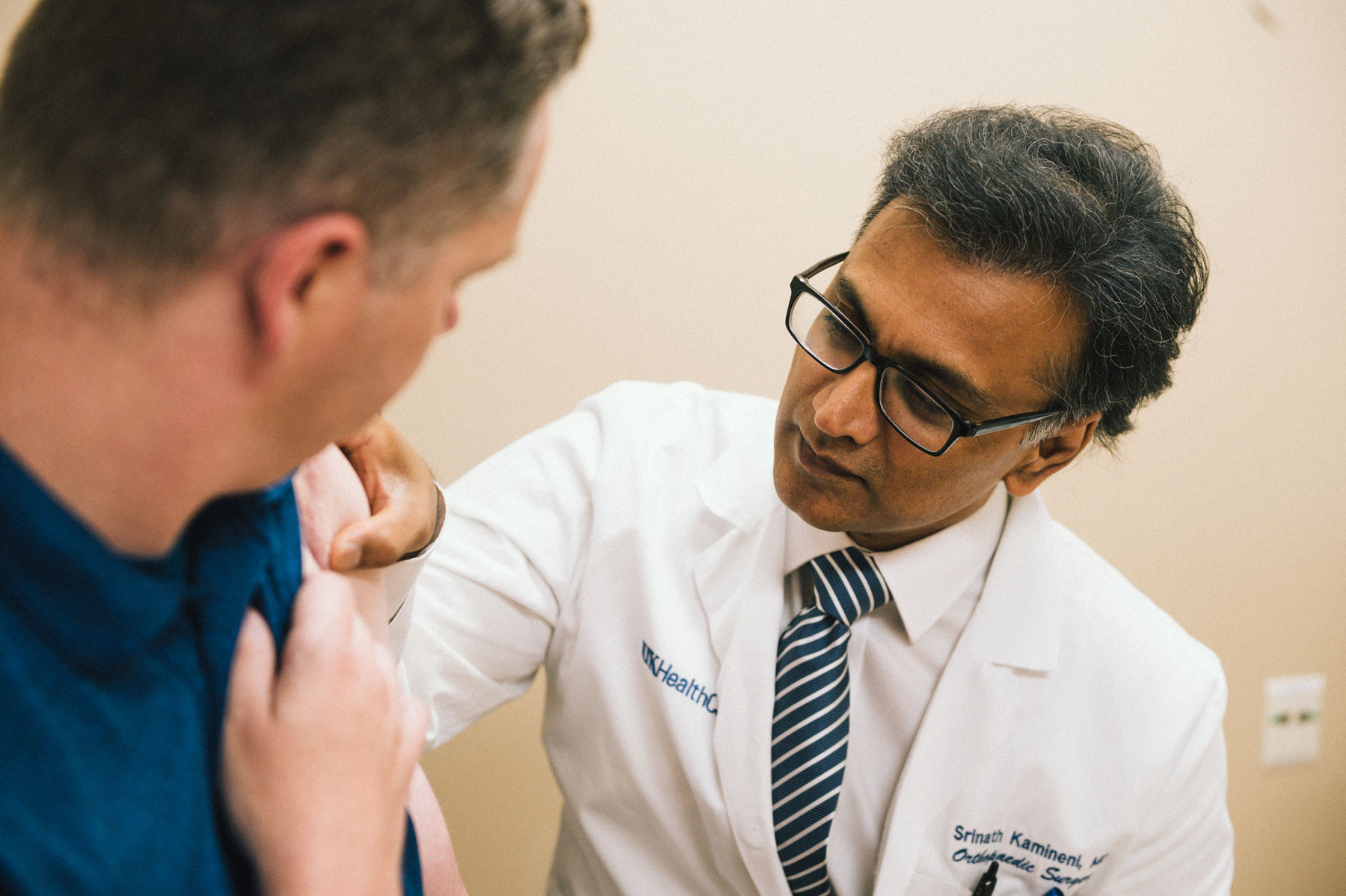 “You’re not just a patient with Dr. Kamineni. He’s willing to stay with me as long as I have questions.”

Dr. Kamineni and his team ended up performing two shoulder replacements on Leonard, then stabilizing the structure of his shoulder with a tissue graft that functioned like a set of suspenders for the replacement shoulder. It’s a complex, innovative approach that will take time and careful rehabilitation to heal. Leonard is up to the task. 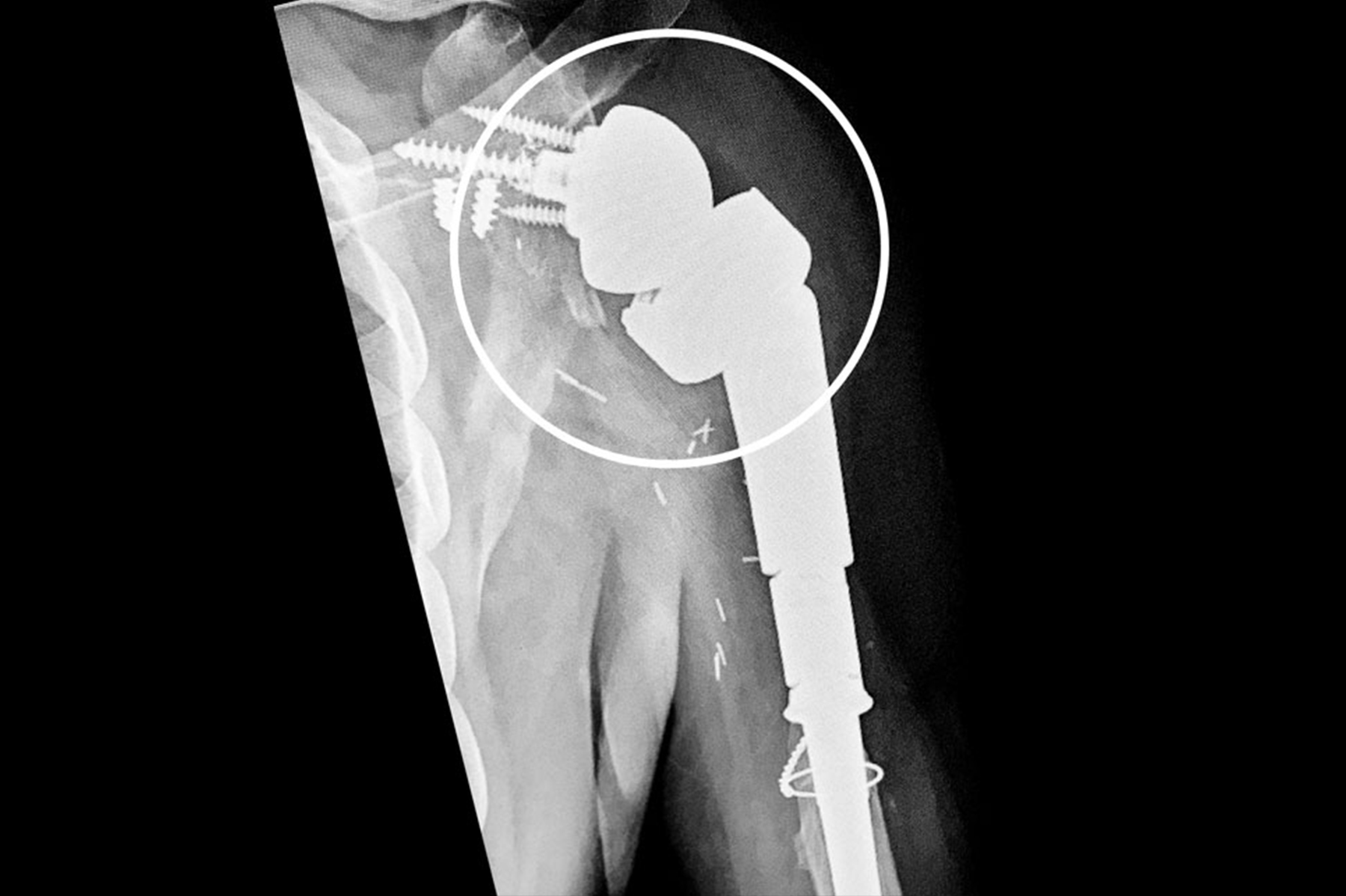 Leonard’s new shoulder, reimagined and rebuilt by Dr. Kamineni and his team.

“The biggest factor in all of this is Leonard’s personality,” said Dr. Kamineni. “He’s a very positive patient and he’s a very compliant patient. And those two features alone give you hope that something will work with him. It’s very underrated, the attitude of a patient towards success, but I think it’s actually one of the biggest features, even with tough pathologies.” 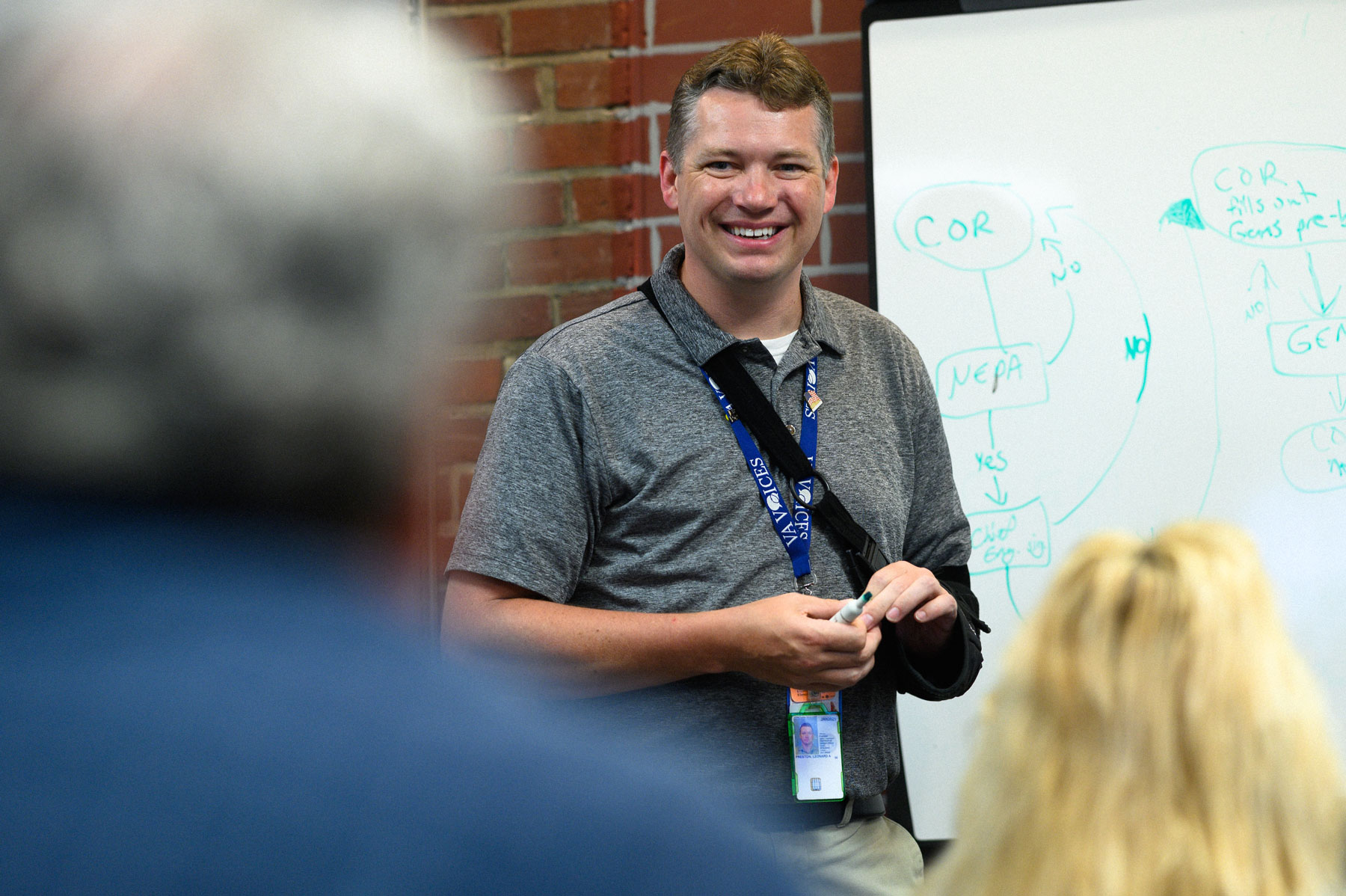 “I walk around here with a smile on my face. If somebody asks questions or has a task, I don't mind to do it at all.”

Leonard’s personality is unwaveringly positive, even with everything he’s been through. VA sent him to college, then graduate school, leading him to his current role as an Occupational Safety and Health Specialist at VA. It’s a job and a life he loves, despite being very different from life before his diagnosis. 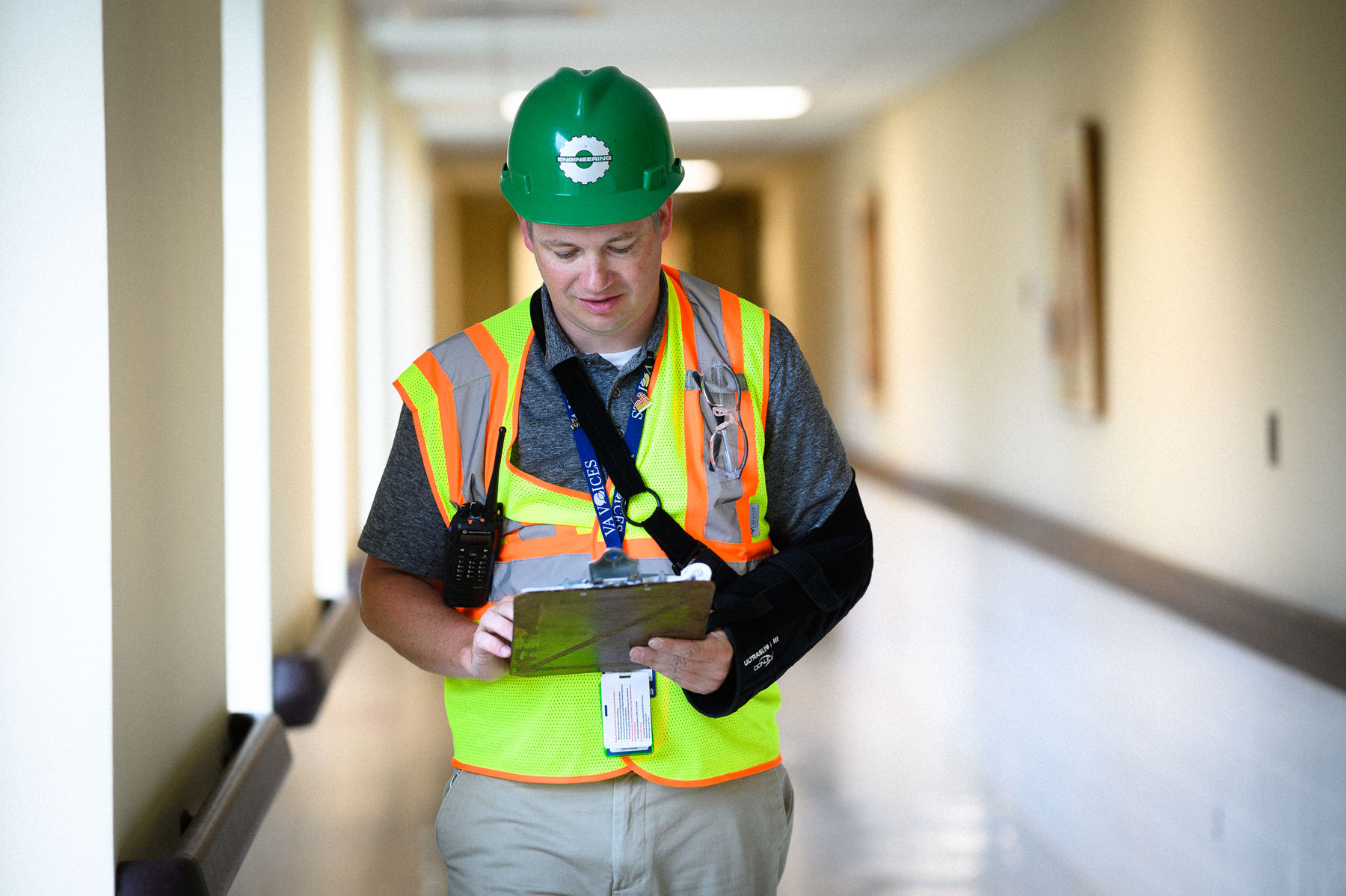 Leonard’s arm will remain in a sling while his shoulder heals, but he’s never let it interfere with his work.

“I always see the good side of stuff, and I think that helps mentally and to prepare you for anything, especially in a situation like this. It takes perseverance and personal will, and you just have to have a positive spin on life. My arm in a sling is not a hindrance.”

“The instant you meet Leonard and you understand his history, you think, how is he so positive?” Dr. Kamineni said.

See how we care for patients like Leonard at
UK HealthCare’s Orthopaedic Surgery & Sports Medicine.

“They are the best. My knee is a testament to it.”Orthopaedics