“I remember thinking, ‘There’s no way I am having a heart attack.’”

After all, at age 53, Dr. Tom McLarney was a healthy, active guy and a lifelong runner. But he was also a doctor, so he didn’t completely write off his symptoms, which started with a pop in his chest. 15 minutes later, his jaw started to hurt. That’s when he knew he was in trouble. 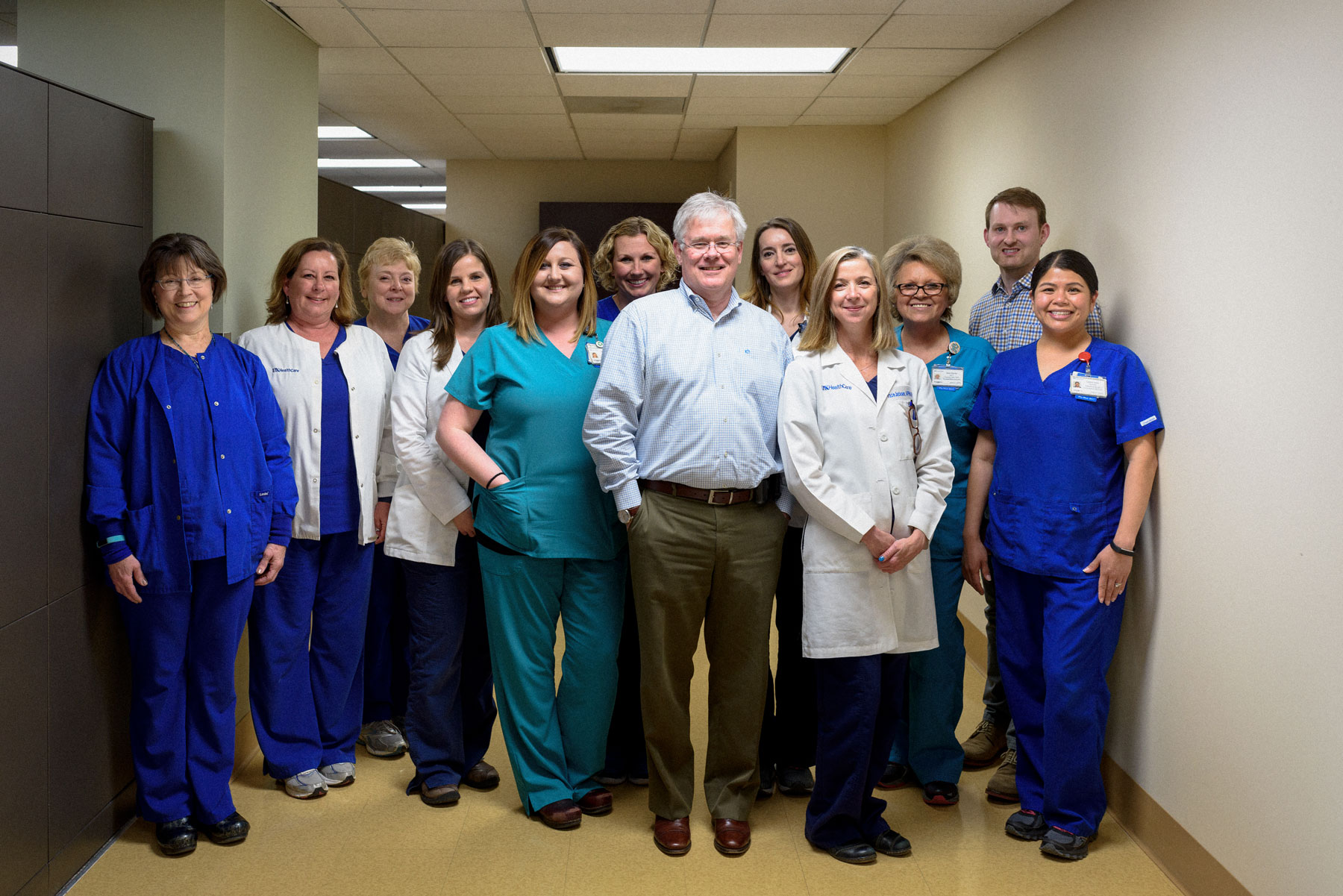 Dr. McLarney with his team. He’s worked at UK HealthCare for nearly 30 years.

Dr. McLarney, an anesthesiologist at UK HealthCare’s Chandler Hospital, was at work when he started feeling symptoms, so he went to his own clinic to get an EKG—a test that records the electrical activity of the heart. Cardiology technician Kimberly Sturgeon was on duty when Dr. McLarney came in. 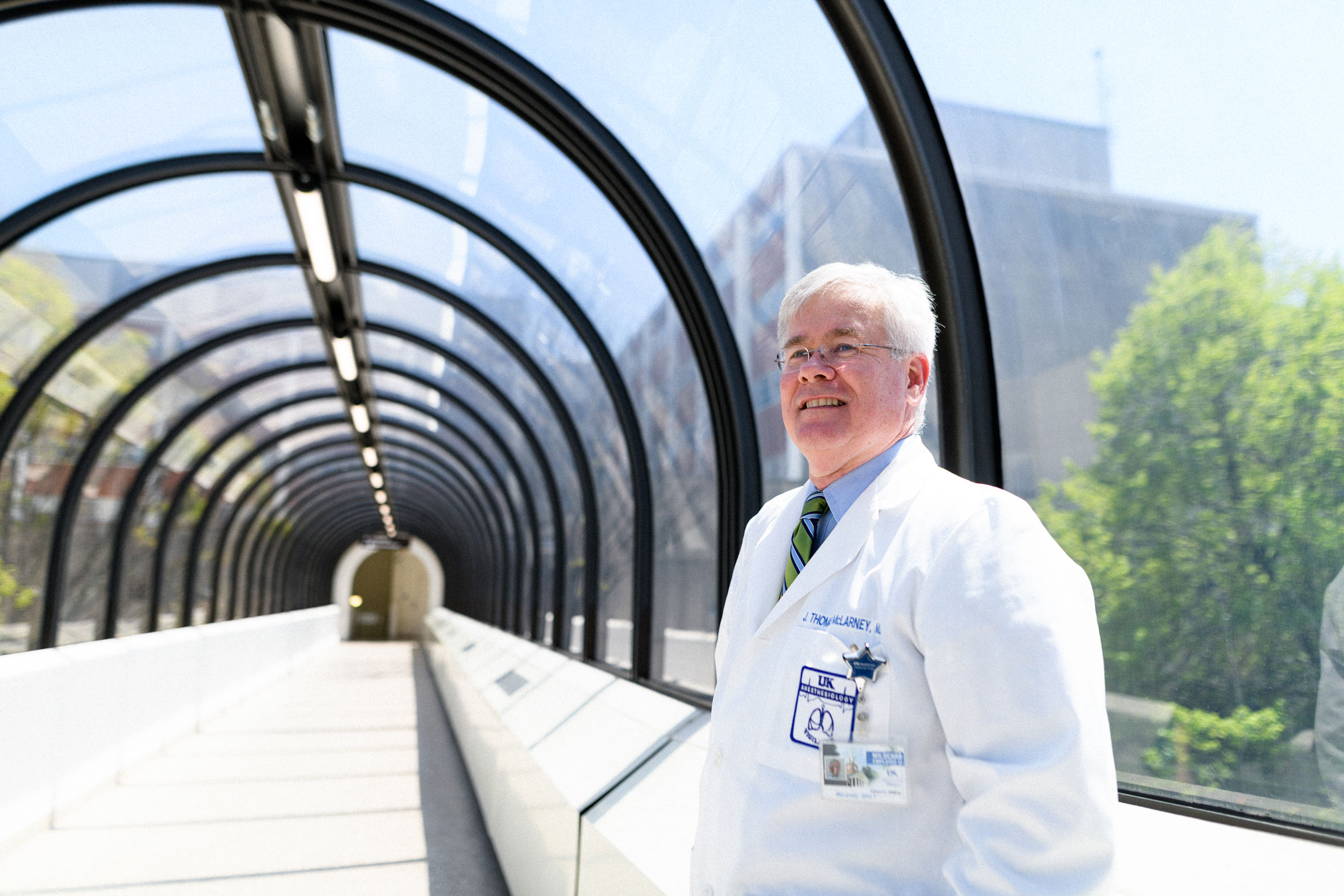 “I was thinking, ‘How ironic if I went down with a heart attack, right now on the bridge, with my own EKG in my hand.”

“He tried to play it off like it was no big deal, that he just wanted to check out why he was feeling the way he was,” Kimberly said. “He’s always concerned about how the other person is feeling. That’s who he is, and I think that’s the reason he downplayed how he was feeling that day.”

Dr. McLarney prepared to walk his results over to his longtime colleague, cardiologist Dr. John Gurley. The only catch: Dr. Gurley was located at the Cardiac Catheterization Lab in the Gill Heart & Vascular Institute—nearly a quarter mile away across UK HealthCare’s campus. 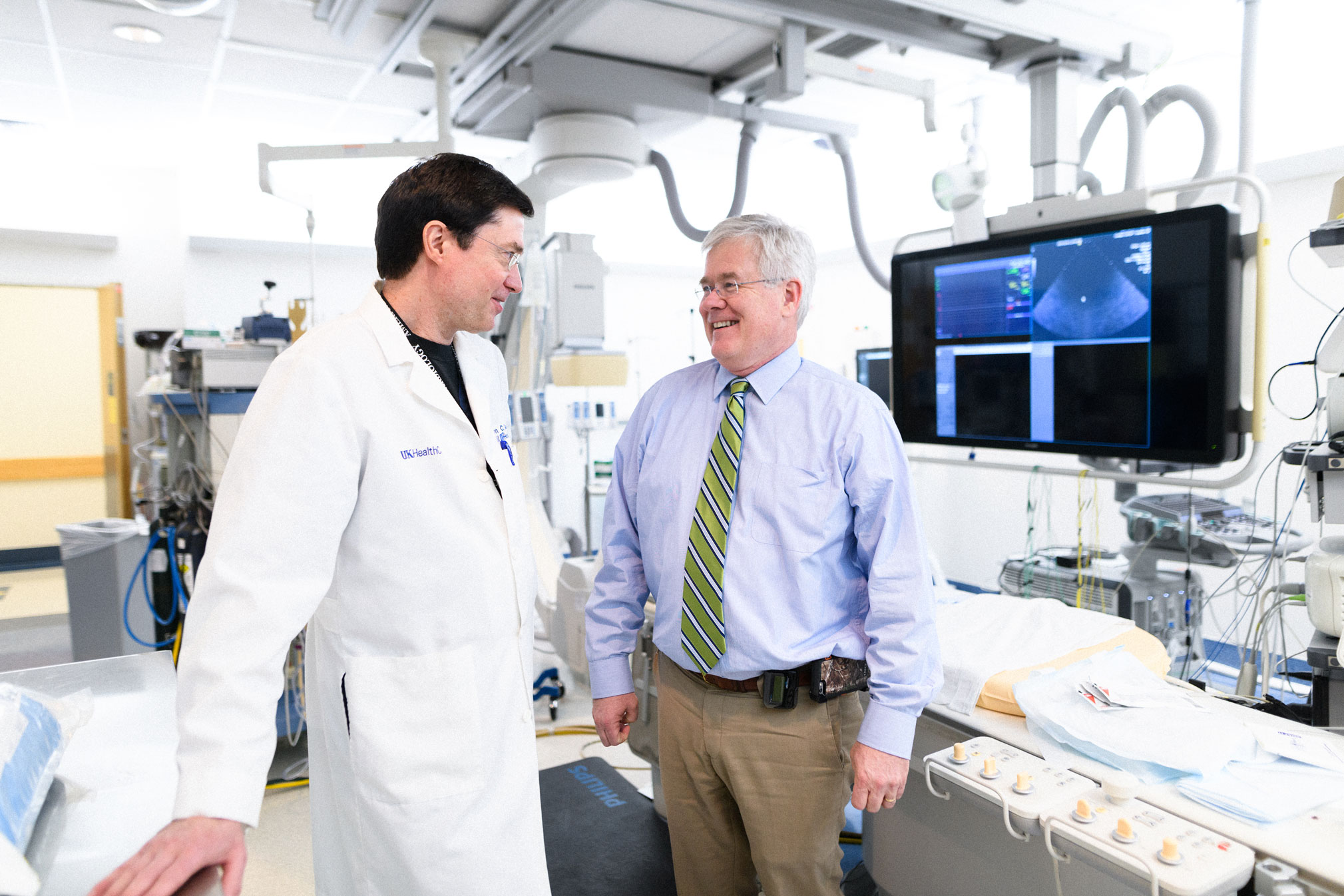 “I have always thought the world of John.” Dr. Gurley and Dr. McLarney have known each other for decades.

Dr. McLarney made the trek by himself—something his nurses in the pre-op clinic would later say they were very unhappy with—delivering the EKG to Dr. Gurley. “I immediately knew this was an acute heart attack,” Dr. Gurley said. “We had to initiate the ‘go’ response right away. I asked him, ‘Whose EKG is this?’ He responded, ‘John, it’s mine.’”

Dr. Gurley and his team jumped into action, hustling Dr. McLarney into a procedure room. 90 seconds later, Dr. McLarney’s heart stopped. The team was able to shock his heart back into a regular rhythm immediately before continuing with the procedure that would save his life: clearing the blockage in one of his major coronary arteries and inserting a stent to keep the artery open. 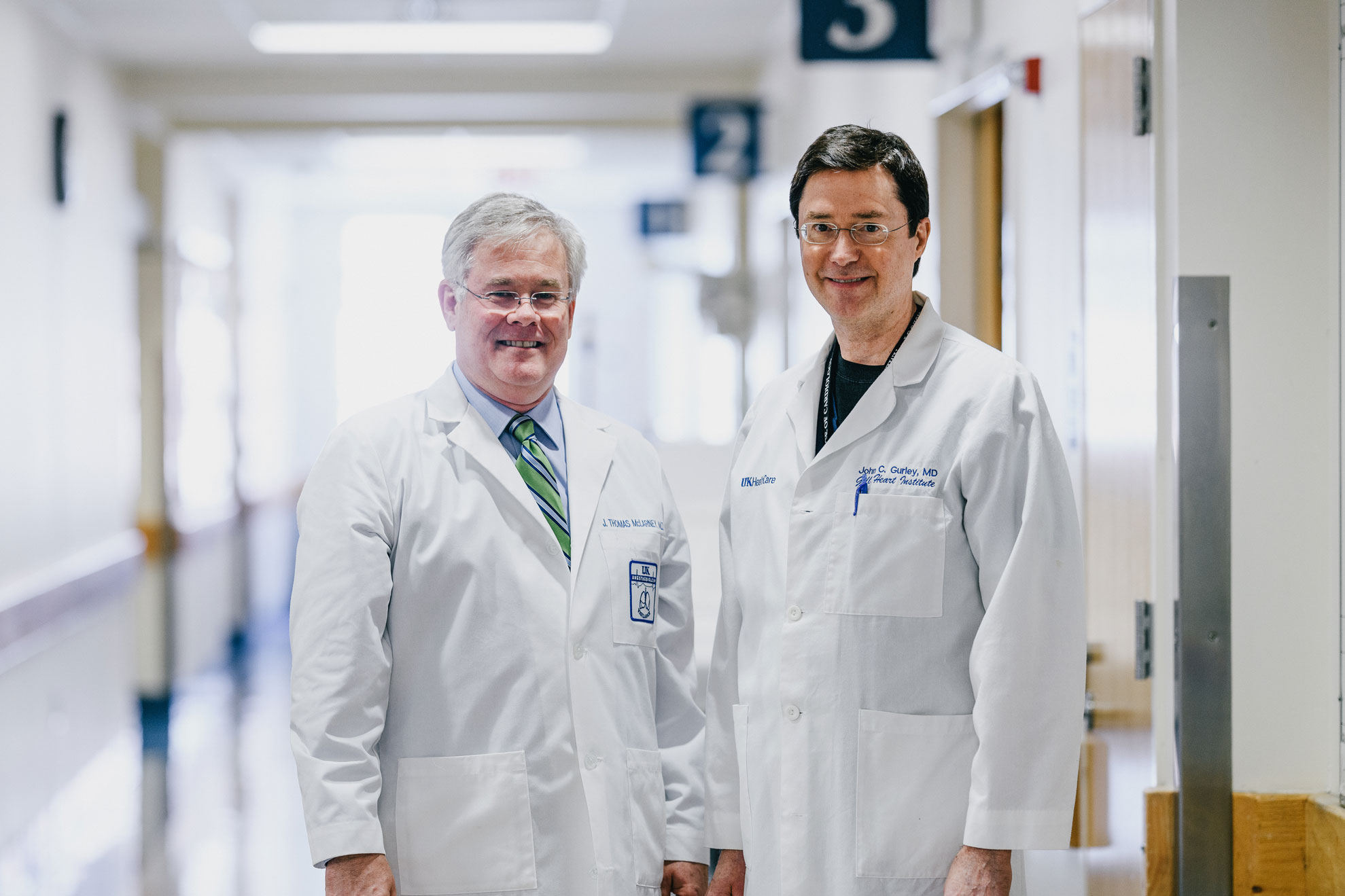 24 hours later, Dr. McLarney was out of the cardiac ICU and on the path to recovery. He returned to work two weeks later. Now, with his heart attack behind him, he continues to share his story in the hopes of helping others recognize and respond quickly to the warning signs of a cardiac incident.

“Thank God I was at UK HealthCare when it happened,” Dr. McLarney said. “The staff is so good at taking care of all of their patients. The facilities are certainly impressive and cutting-edge. But the strength of UK HealthCare is its people.” 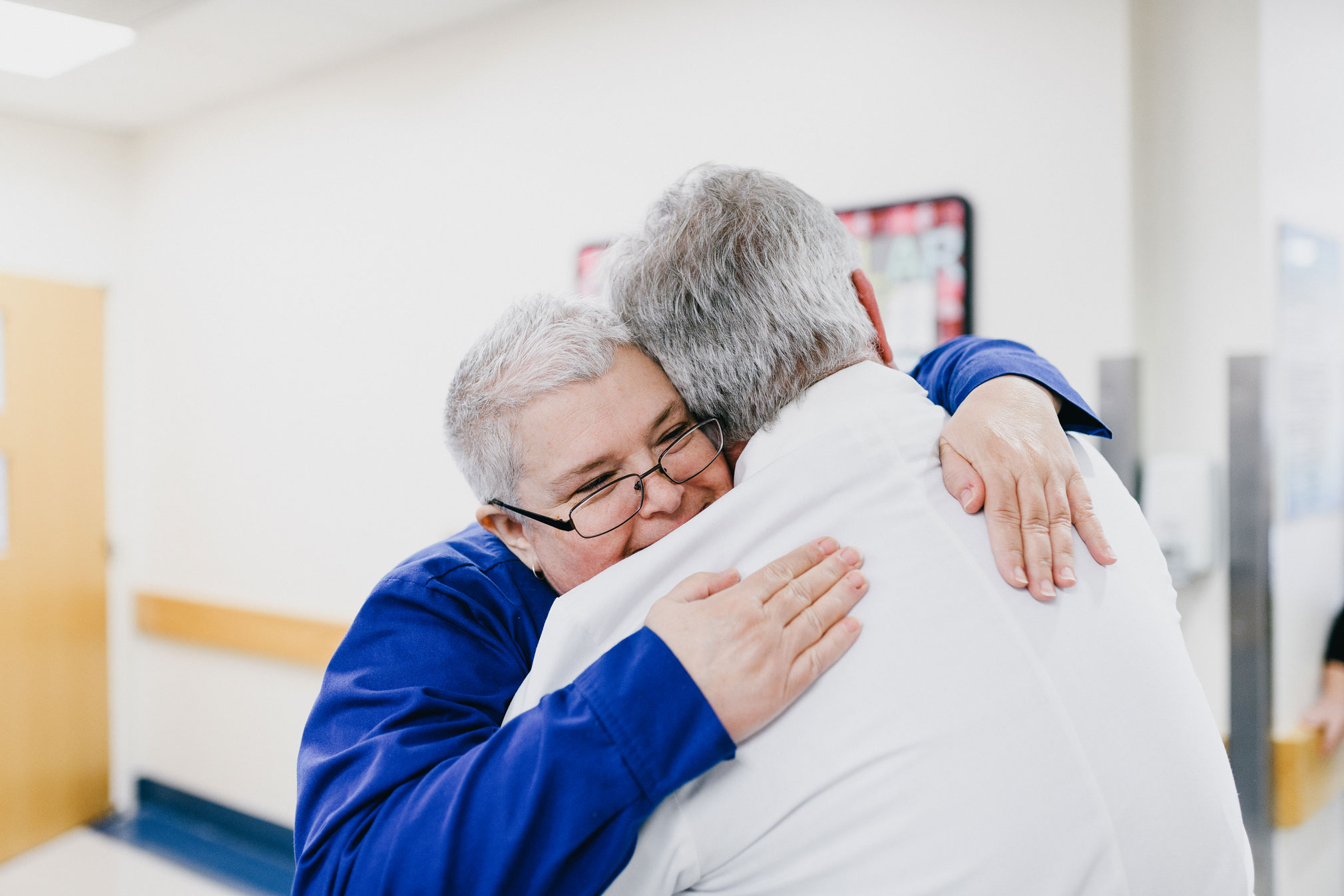 Kelly Kampmann, RN, was responsible for Dr. McLarney’s recovery care, and is part of a huge network of caring friends and staff.

Learn more about how we care for
patients like Dr. McLarney at
UK HealthCare’s Gill Heart & Vascular Institute.

From the Heart, for the HeartHeart, Moms, Transplant