As a middle-school choral teacher and a man of deep faith, Damon Greene’s voice is his life and his livelihood. That made his diagnosis with Stage 3 lung cancer even more life-shattering. 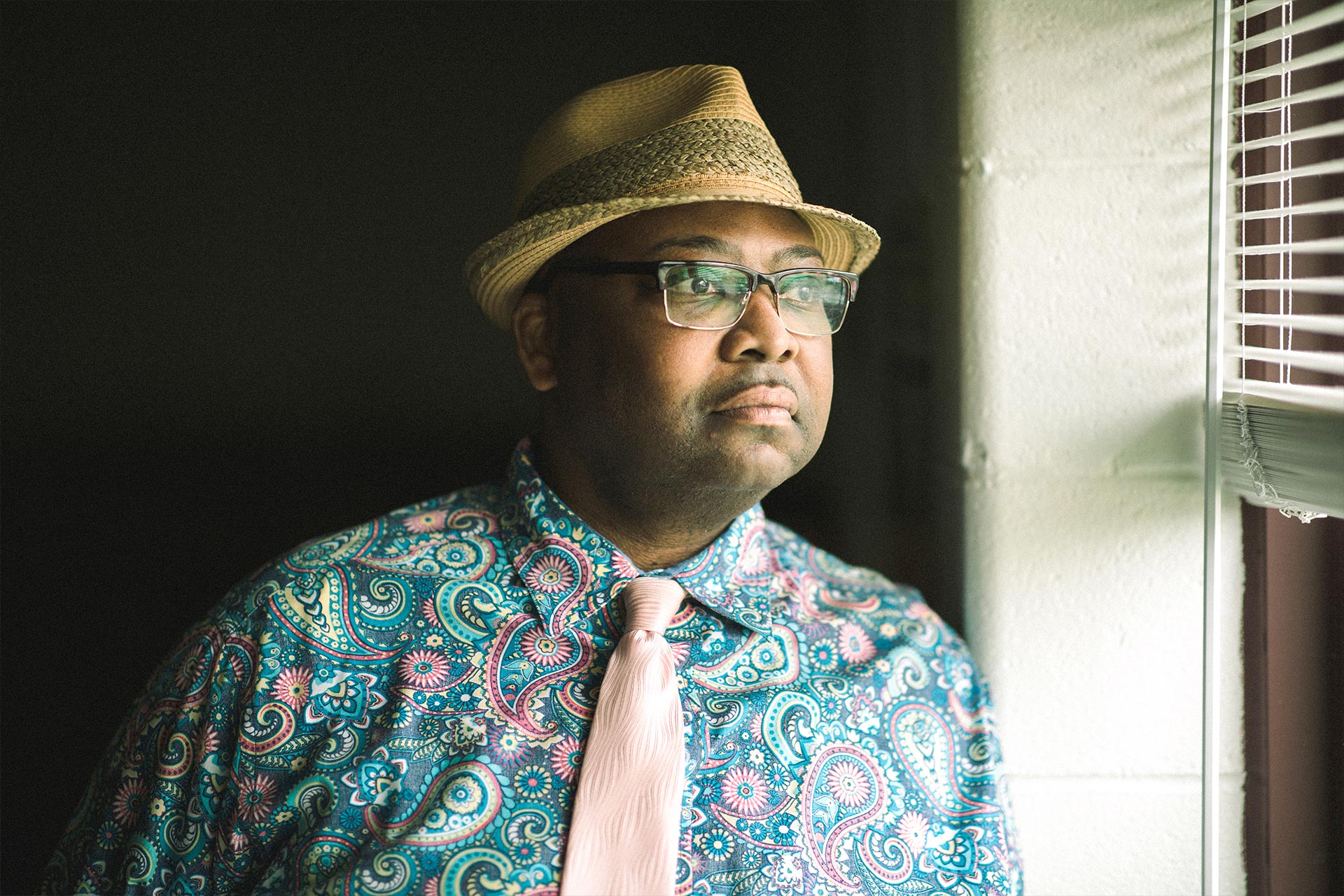 Damon Greene was photographed in his classroom on “Derby Hat Day.”

“It’s how I worship, it’s how I make a living. I have to breathe in order to sing. The initial day when I was diagnosed—it was too big for me to handle.” 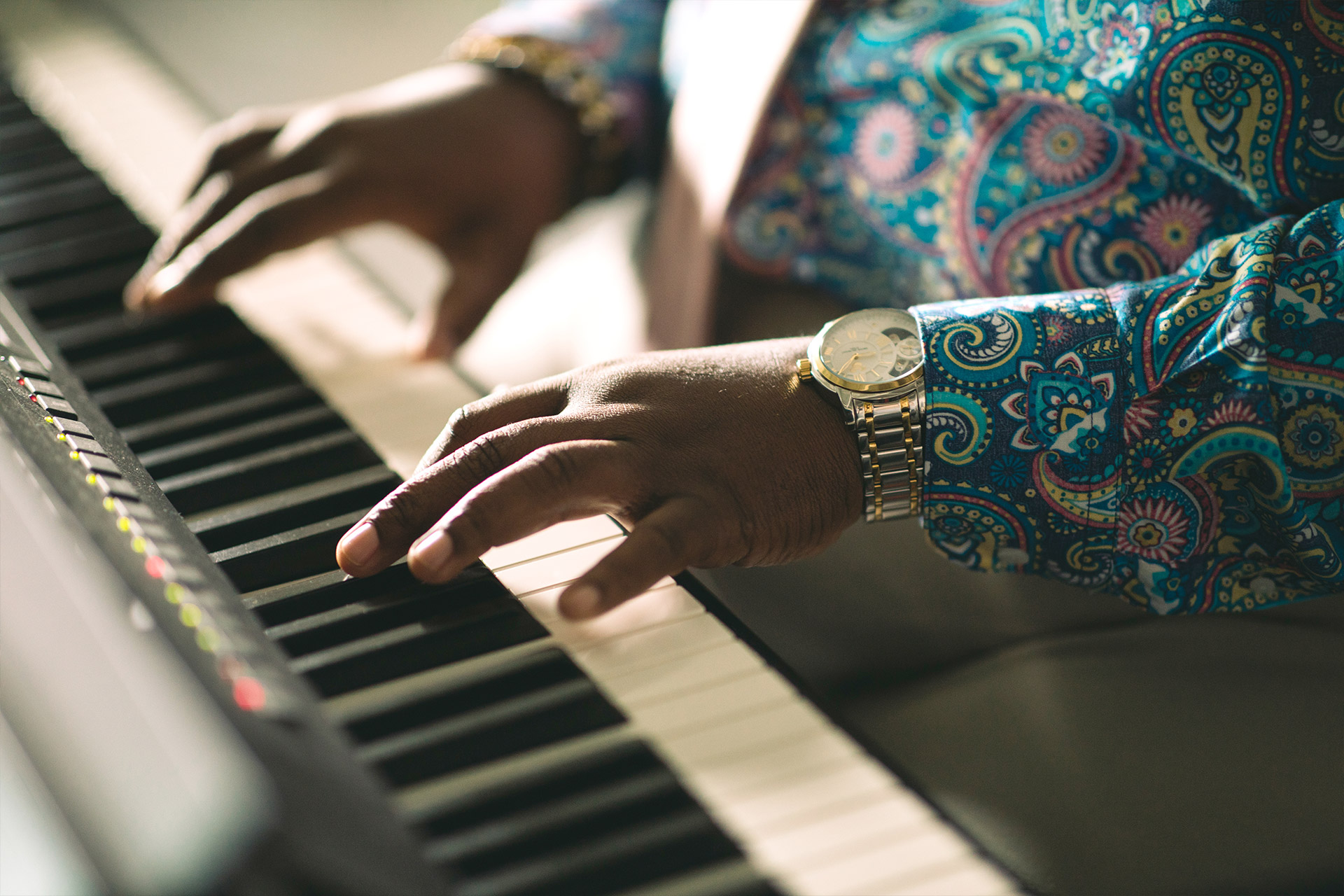 Everyone at Elkhorn Middle School, from the receptionist to decades’ worth of alumni, knows and loves Damon. He’s taught at the school for 25 years.

Following his diagnosis in November of 2017, Damon was referred to UK HealthCare’s Markey Cancer Center, where he met Dr. Susanne Arnold and nurse Rebecca Heichelbech. It was the beginning of a relationship that would outlast his treatment. 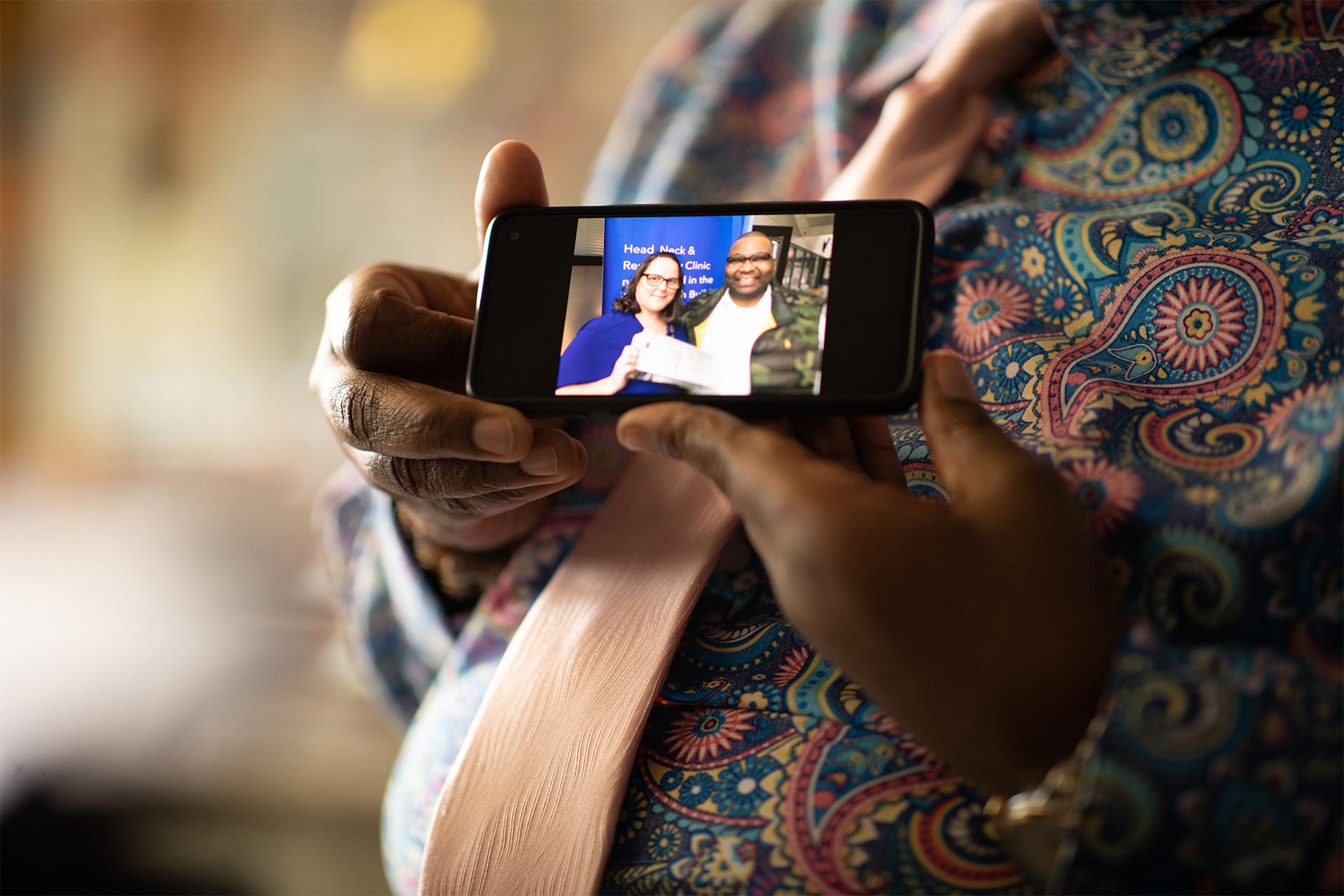 “Every part of that whole experience, everyone at Markey has been wonderful. My nurse there, Rebecca, has become like family.”

Damon became a well-loved figure during his time at Markey. “Damon is a huge personality,” said his nurse, Rebecca. “He always has a smile on his face, even when he’s afraid. Everybody in this clinic knows Damon, and when he walks in, everybody knows it’s going to be a great day.” 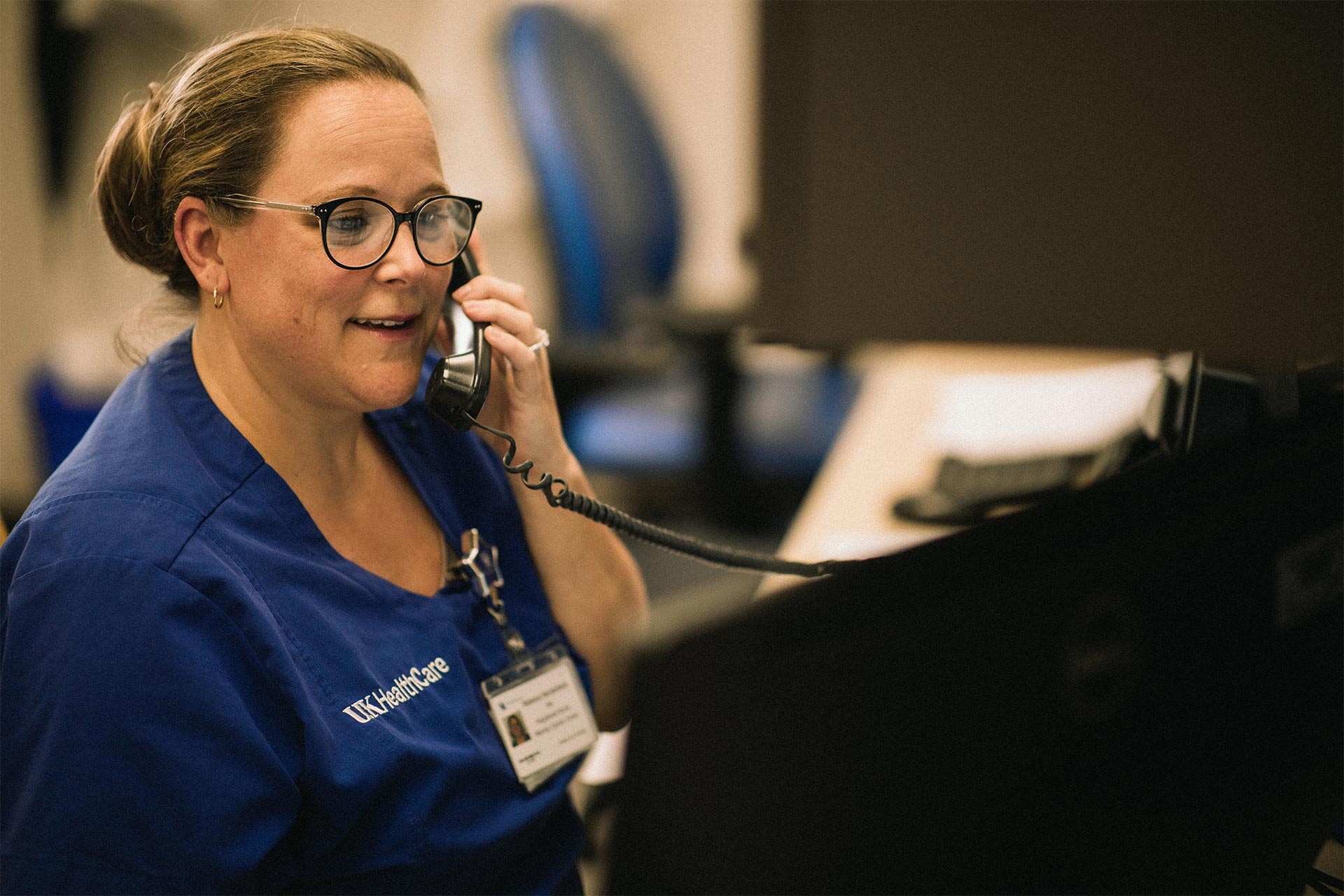 “Middle school boys hugged me and said, ‘Thank you for taking care of Mr. Greene.’ That makes my job completely worth it.”

Despite his serious Stage 3 diagnosis, Damon stayed positive throughout his treatment. (“The only thing I worried about was losing my eyebrows,” he joked.) After more than a year of chemotherapy and radiation, he was declared cancer-free in January of 2019. 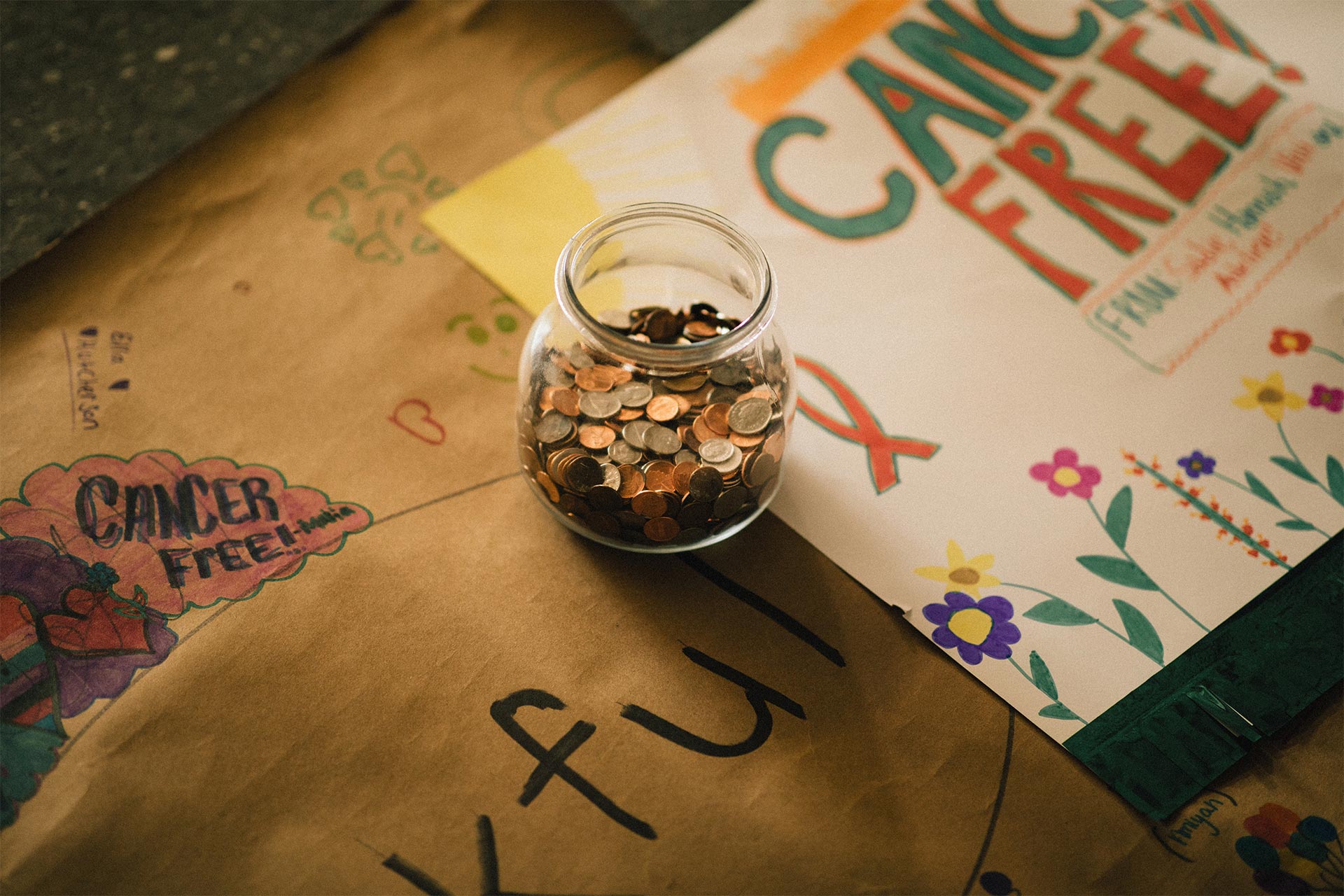 Damon’s students raised more than $1,000 through Penny Wars, where teams competed to collect the most spare change. They donated the money to Markey Cancer Center in Damon’s honor.

“The chemo and radiation have affected my voice, but I’m not going to let it stop me,” Damon said. “Because I’ve got a story to tell. I want to be a witness to others who may go through this.” 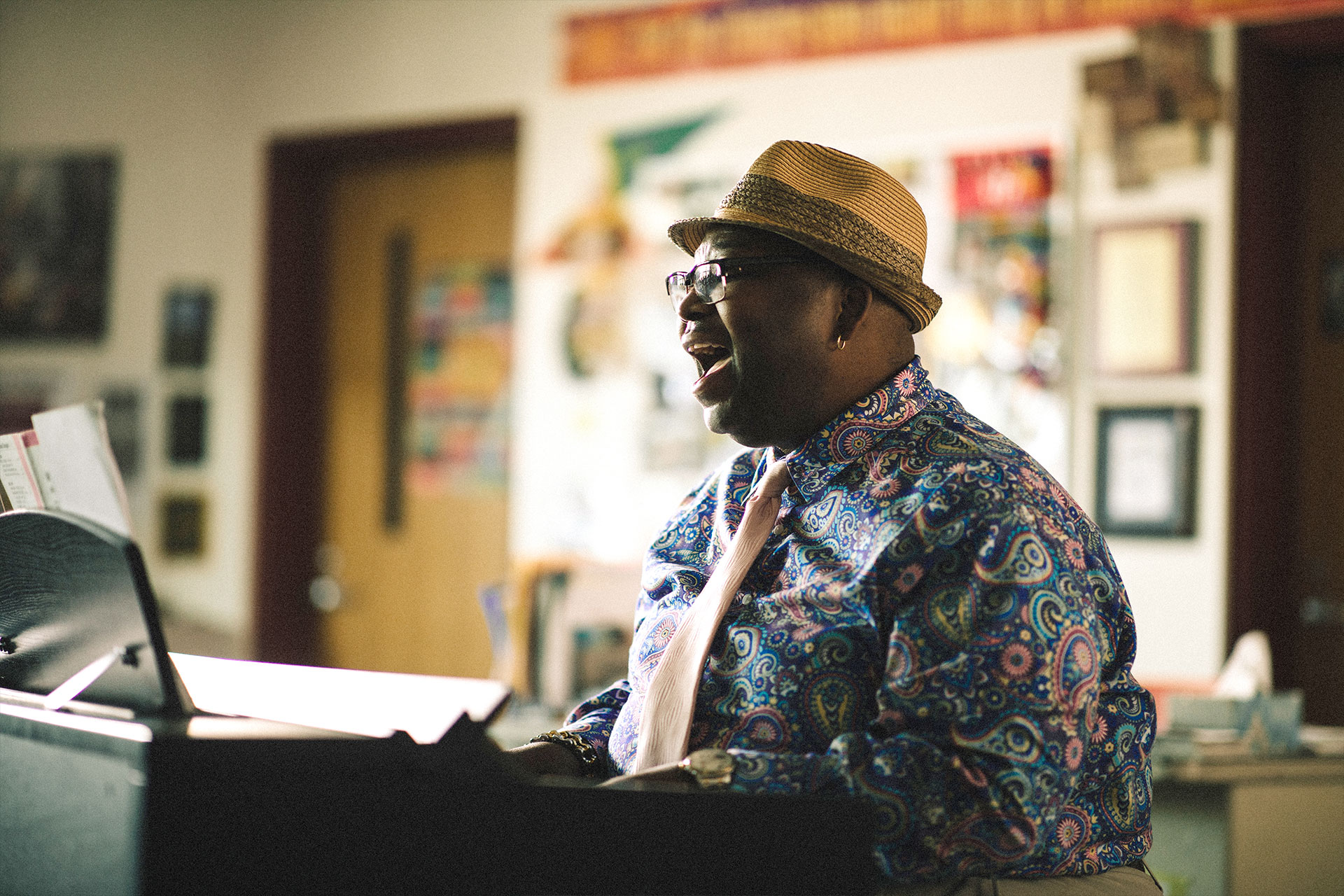 Damon continued to be a powerful singer after beating lung cancer.

Despite Damon’s positive prognosis at the time this story was written, his cancer eventually returned. He passed away in April of 2020, leaving behind an immense legacy in the lives of his friends, family, colleagues, and, especially, his students.

Learn more about our multidisciplinary approach to cancer care at the UK Markey Cancer Center.

“I’m not just limited to what I can do in the operating room.”

Beating Cancer and Getting Back to Her ClassroomCancer